Feel 100% satisfied with your purchase -- with no restocking fees & no return shipping costs* within 30 days of delivery. Learn More
This item is currently out of stock and it may or may not be restocked.
Out of Stock
Add To Wish ListFound on 1 wish list 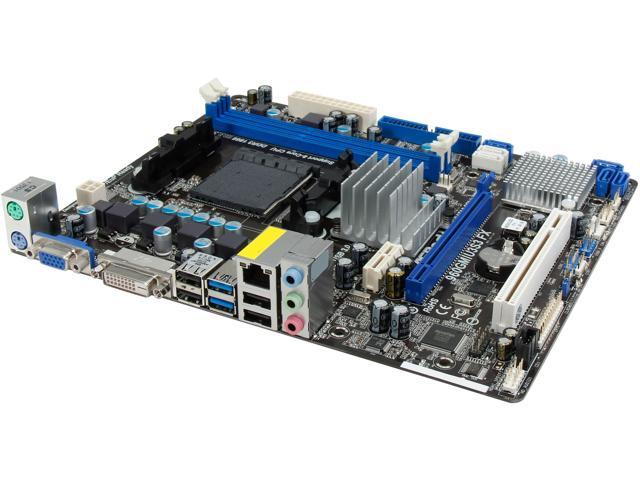 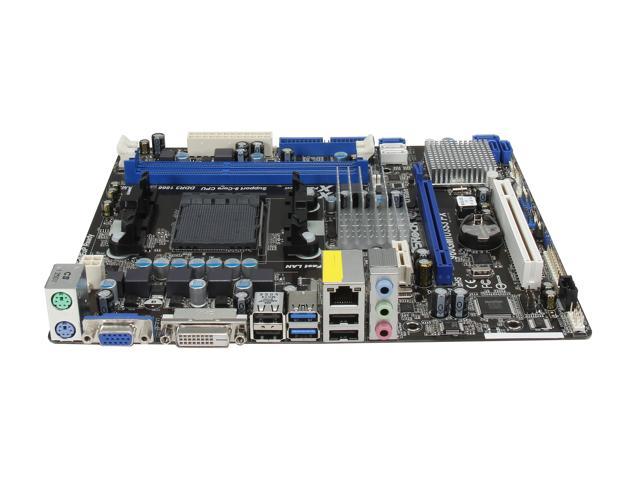 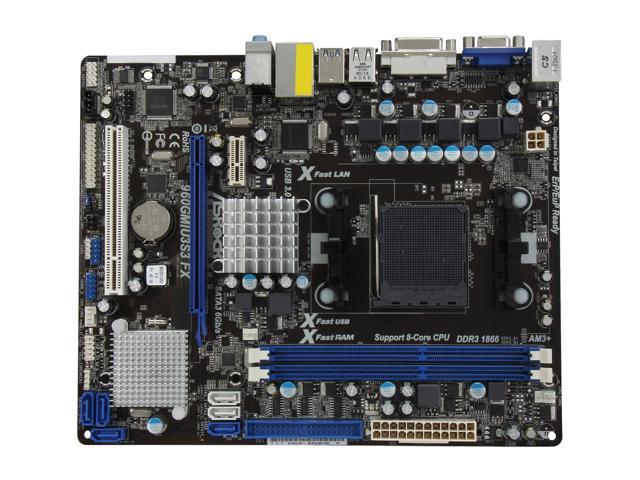 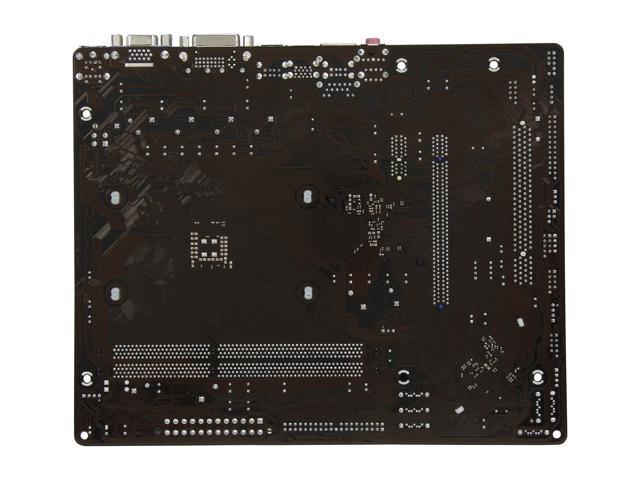 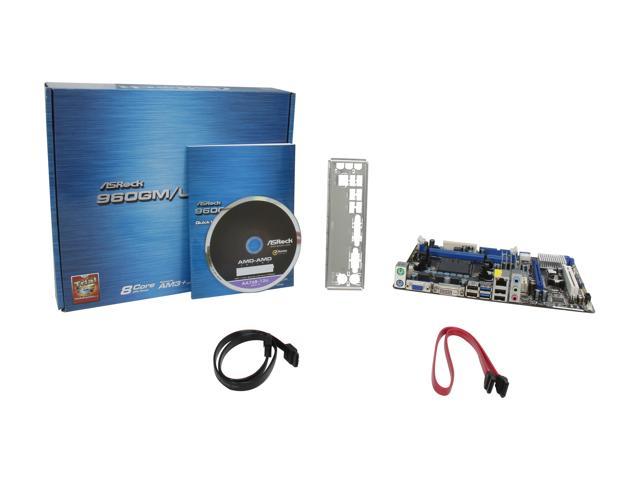 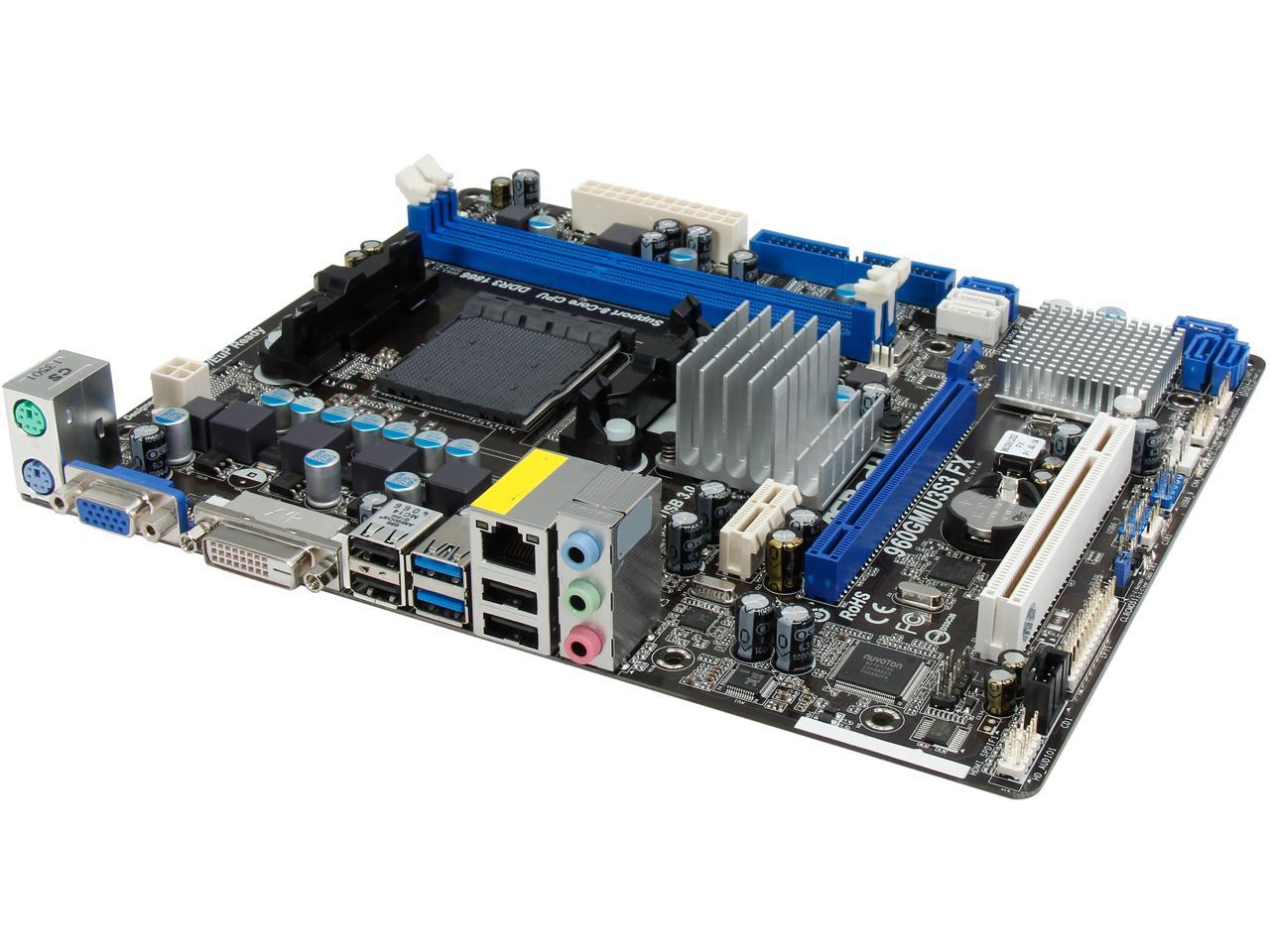 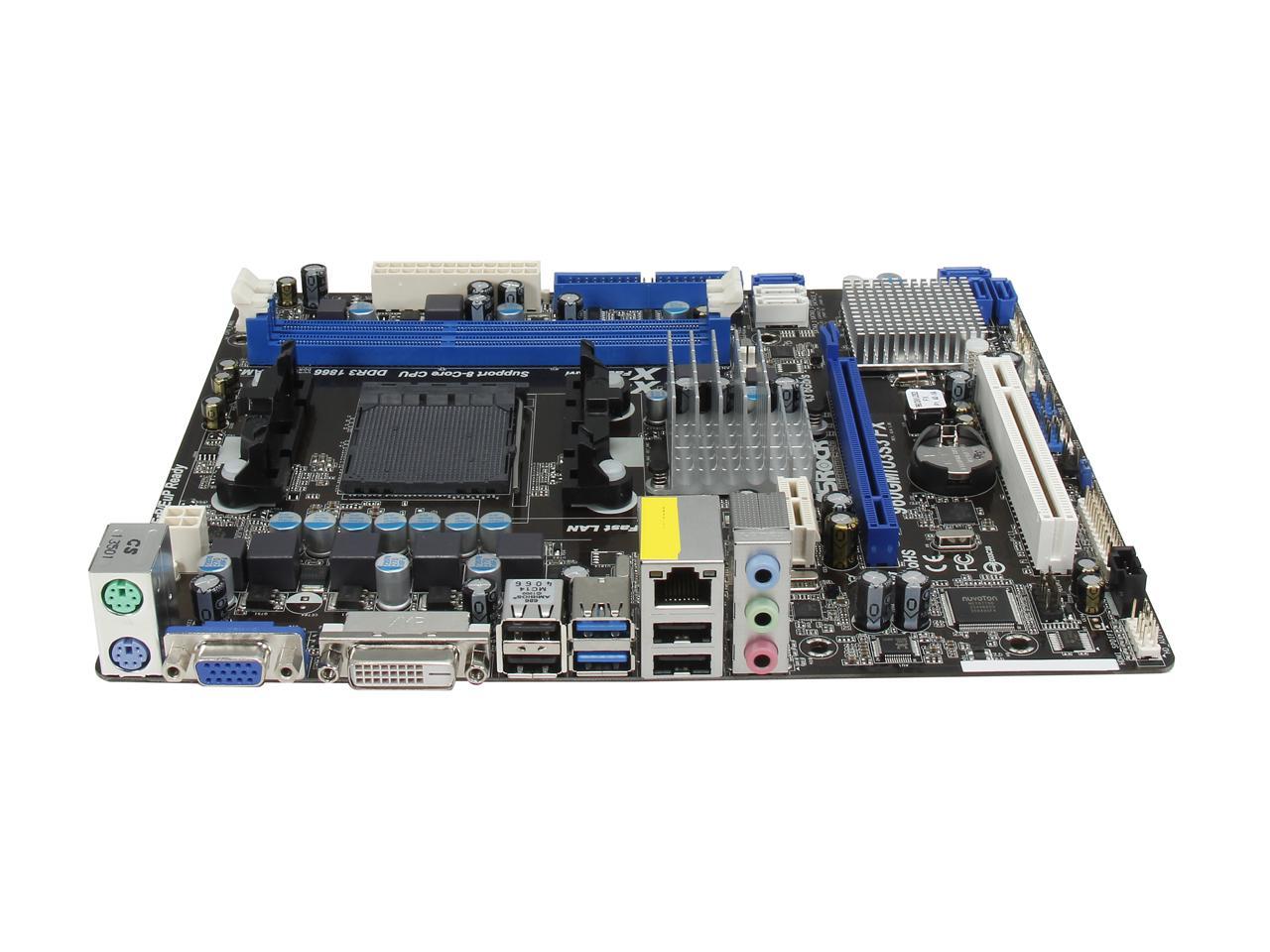 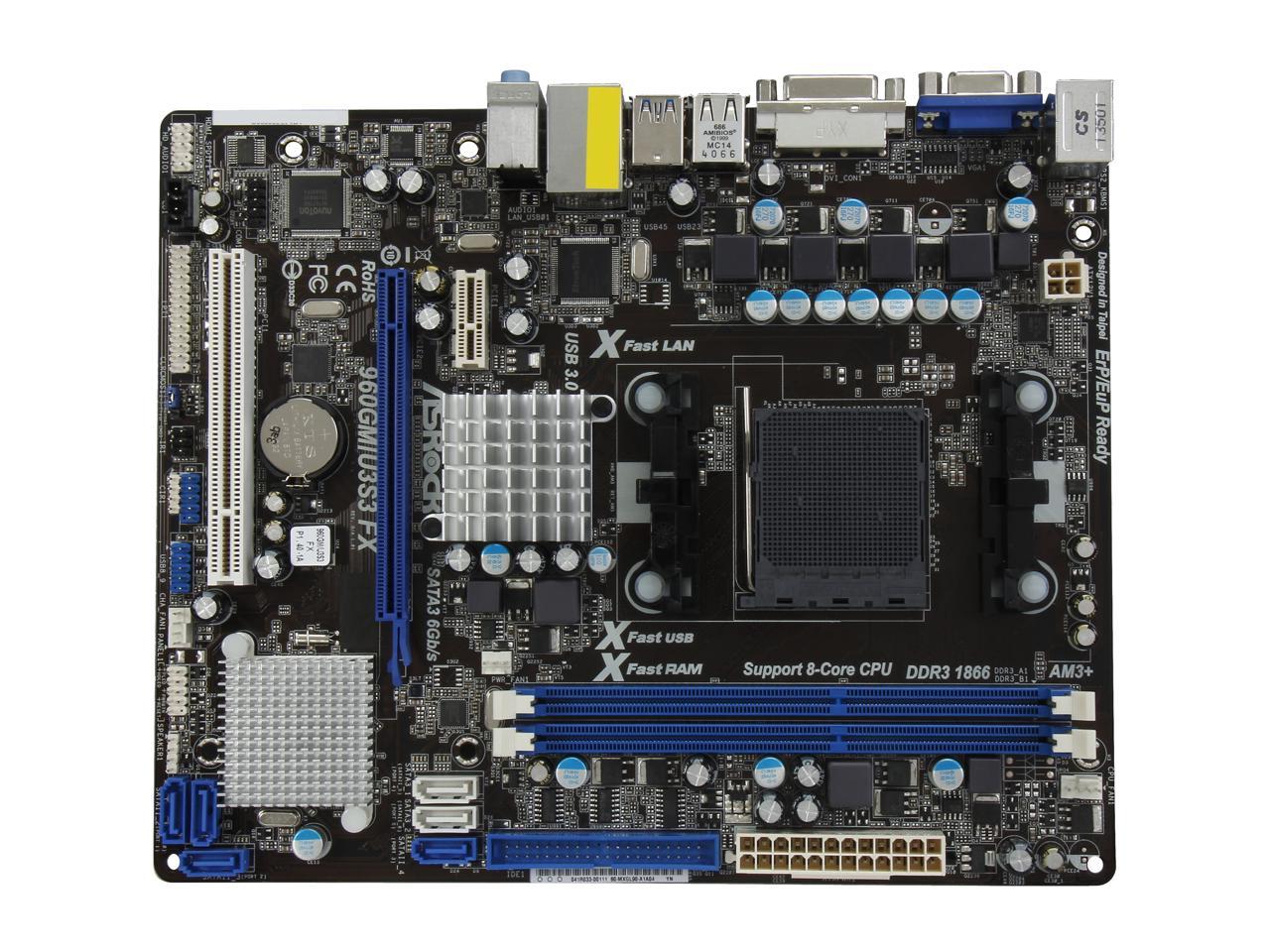 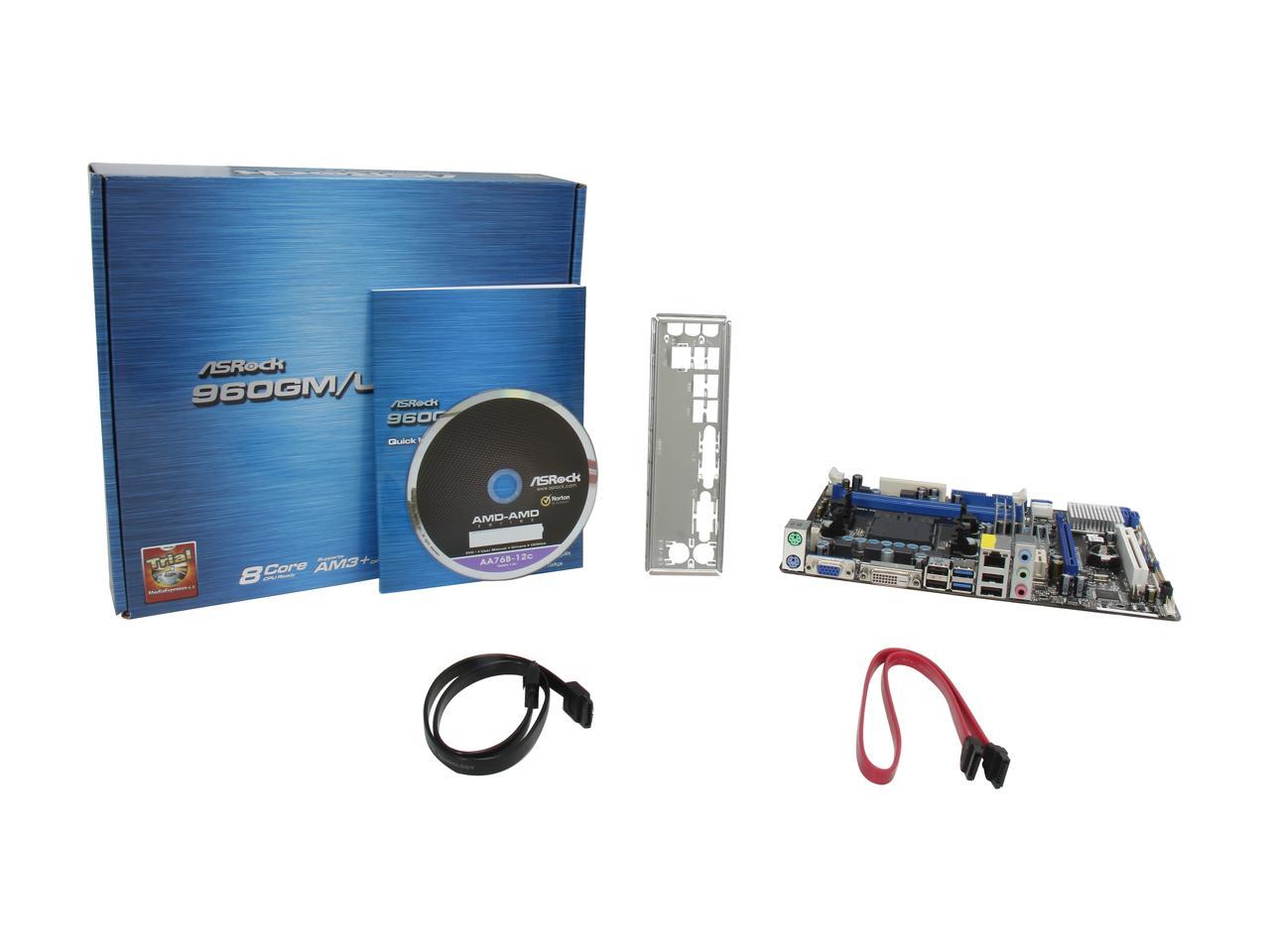 Cons: None that I found.

Overall Review: Bought 4 of these for re-builds. All 4 boards functioned and run well. All components are working. I paired these with Phenom II 965's, 8GB Memory they run well. Great budget build that covers a lot of good features.

Cons: -I was positive it was a problem with the motherboard but I fully resolved it. If you have restarting problems or lock ups with this motherboard, go to the bios and manually set your memory to 1333 if it's 1600 or above speed memory. No problems for 4 days since I did this. -The board is pretty tiny, and I don't like how the Ram sticks are nearly pushed right up against the heatsinks, and how an added on video card can blow heat right onto the CPU heatsink, but that is to be expected with a Micro ATX.

Overall Review: For the price, this board has been working nicely, been doing nothing but heavy gaming and Sony Vegas video rendering with it. I've noticed some people have been having this board fail within weeks, I will post here if that happens to me, but so far it has been pretty good to me. No other technical or physical issues with it, BUT I wouldn't ever rule them out because they can still happen.

Pros: Right away this board has a lot of good things going for it: USB 3.0, plenty of USB 2.0 ports, CIR support, good price and a great layout. Just to expand on the layout portion, there are a number of AM3+ mATX boards. Almost all of them come with 3 expansion slots and the PCI-E x 1 slot BELOW the x16 slot. Putting a double wide graphics card in? You're left with just one more slot and PCI no less. I needed a PCI-E x1 and a PCI-E x 16. With this board, I can have my cake and eat it too. More manufacturers should follow this design (it's been the staple for awhile so I'm not sure why so many decided to buck the trend).

Cons: SATA III (6Gbps) is based off of an auxiliary chip instead of using a southbridge with one built in. Using the auxiliary chip can sometimes lead to slower speeds and weird compatibility issues. I would absolutely use the SATA II over the SATA III for your boot drive. I would only use the SATA III if I ran out of ports. Ideally, I would just like to see all SATA II. Speaking of, the chipsets used here are the 760G (northbridge) and SB710 (southbridge). Both of which are around 4 years old at this point. I would have preferred to see at least 880G WITH SB850 (the latter of which has much better SATA and USB speeds over the SB710) which are still old, but offer native SATA III ports. I knew what I was buying and I know that this would raise the price but if this solution was offered I probably would've paid for it. Lack of 125W 8 core FX chips is also a con, but I wasn't planning on using one right away so no big deal

Overall Review: The main thing that lead me to giving this 4 eggs instead of 5 was PATA/IDE compatibility. This motherboard went into overhauling a pretty old (~2005) machine with upgraded internals. To keep the cost down, I still wanted to use the ol' DVD RW IDE drive. I know for a fact this drive works but with the old drive in the computer would intermittently fail to pass POST. Switching the drive from cable select to master did not alleviate the issue nor did using a different IDE cable. The only thing that did was to unplug the IDE DVD drive. Luckily I had a spare SATA DVD RW drive and the PC has been running without a hitch. If your PC will not post, try unplugging the IDE drive first before RMAing (if there is one). For what it's worth, it's possible this issue is specific to the DVD drive I was using and the motherboard, but it was still a pain. PC Specs: - AMD Athlon II x2 255 (3.1GHz) - G.SKILL Ripjaws X Series 4GB (2 x 2GB) 240-Pin DDR3 SDRAM DDR3 1866 (PC3 14900) - Desktop Memory Model CORSAIR CX430M 430W ATX12V v2.3 80 PLUS BRONZE Certified Modular Active PFC Power Supply - 120GB Kingston 3K SSD - MSI low profile 5670 512MB GDDR5

Overall Review: PCI-e bus is only a 2.0, but it's compatible with 3.0 components. This is a good board for just about anyone that doesn't care about multiple GPUs, then again, most MicroATX boards don't support that anyway.

Overall Review: Picked up one of these to rebuild my HTPC, went from a 2-core Intel (socket 755) to a 4-core Athlon II. My boot/OS SSD and storage HDD are connected to the SATA 6Gb/s ports. So far, absolutely no problems with boot-up or drive access. Granted, you have to install the SATA 3 and USB 3.0 drivers from ASRock's site. But once you do that, you're all set. I honestly don't know what the other reviewers are complaining about, I haven't had any trouble with this arrangement. Just remember, if the motherboard has 960 in its model number, it will be based on the latest revision of the AMD 760/710 chipset. SATA 2 (3Gb/s) is going to be the native drive support and USB 2.0 will be the standard USB ports. And you can only use FX chips up to 95W TDP. Work within those standards and you won't have any trouble. I would gladly buy another one of these for a mainstream machine or entry-level gamer. This isn't a motherboard you can hotrod.

Pros: Cheap. Seems to be a great motherboard for the price.

Cons: Came with damaged PCI-E slot. Didn't realize that the PCI-E slot was damaged until I fully assembled the computer.

2 out of 2 people found this review helpful. Did you?
Manufacturer Response:
Dear ASRock Customer We sincerely apologize for any inconvenience this may have caused you. Please contact us at http://www.ASRock.com/support/tsd.asp. We will assist you shortly. Thank you ASRock SUPPORT Tech Support Email: http://www.ASRock.com/support/tsd.asp
Anonymous
Ownership: 1 week to 1 month
Verified Owner
Awesome motherboard for budget gaming builds!4/25/2014 5:31:02 PM

Pros: Awesome. Just really good for the price. Pretty durable too. I really pressed hard on it while installing the graphics card and didn't break!

Cons: The only small thing that I don't like about this board is that there is no USB 3.0 header which sucks but whatever. there are some on the back anyways.

Pros: A decent bargain board, especially for the price tag. A decent amount of ports (USB and SATA) for a Micro Board. Normally I hate micros. Worked out of the box, still working now, and was easy to install. Theoretically, it has some decent CPU support if the BIOS is flashed/updated. I like the BIOS, has a fair amount of options, and made it easy to set up AHCI mode for my Samsung 840 EVO. Simple OC tools, and apparently a Flash utility within the BIOS (I haven't used it yet, but the idea is a good one).

Cons: Ok, here's why I knocked off an egg: The SATA3 controller is the ASMedia ASM1061 which apparently performs anywhere from 20-25% less when compared to the native AMD and Intel Controllers on other boards (my Z77 Asus board, for example). Had I known this beforehand, I wouldn't have bought it - that was the reason I changed the motherboard out in the first place. I had bought that EVO and put it in a SATA2 board, but decided I'd change it out for SATA3 and get the most I could out of it. The result was nowhere near what I had hoped. I've read that the PCIe bus that the controller runs on can be OC'ed to get better performance, but I'm not really confident about it.

Overall Review: Make sure you download the motherboard's Manual from the manufacturer's website and read it in advance when picking out a MB so you know exactly what you are getting. Normally, I'm better about that, but was unaware of the issues with these SATA3 controllers until recently.