Purchases from these Sellers are generally covered under our Newegg Marketplace Guarantee.
5 Ratings (80% Positive)
Sold and shipped by: W&Y Network TechnologyContact Seller
Ships from United States.
5 Ratings (80% Positive)
On-Time
Delivery
80.00%
Product
Accuracy
80.00%
Customer Service
Satisfactory
100.00%
View All Seller's Reviews
This item is currently out of stock and it may or may not be restocked.
Out of Stock
Price Alert
Add To List 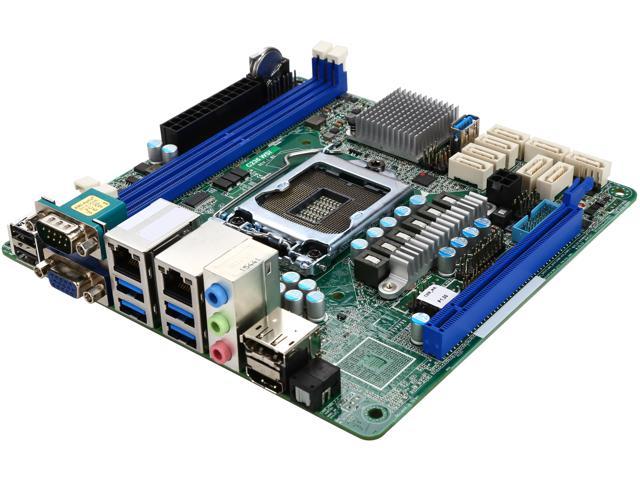 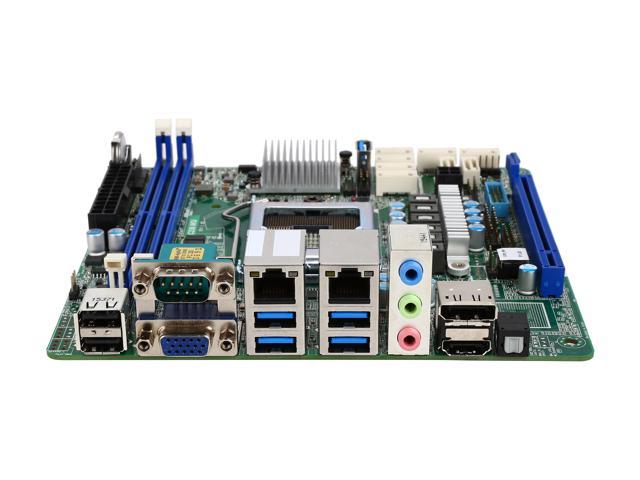 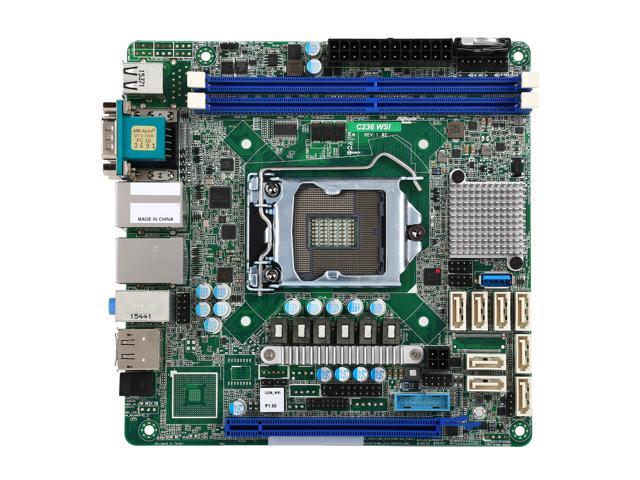 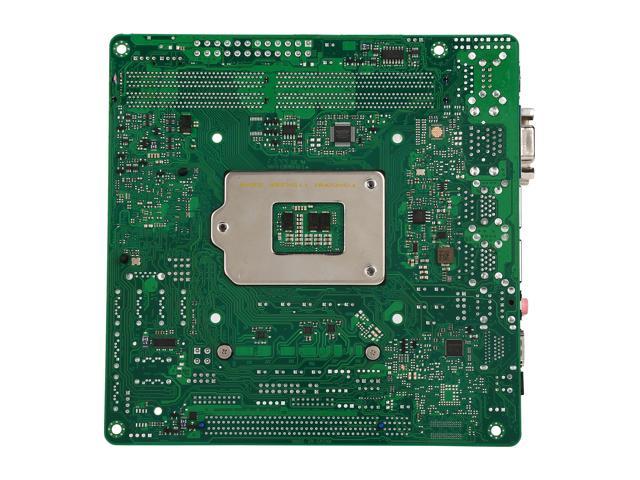 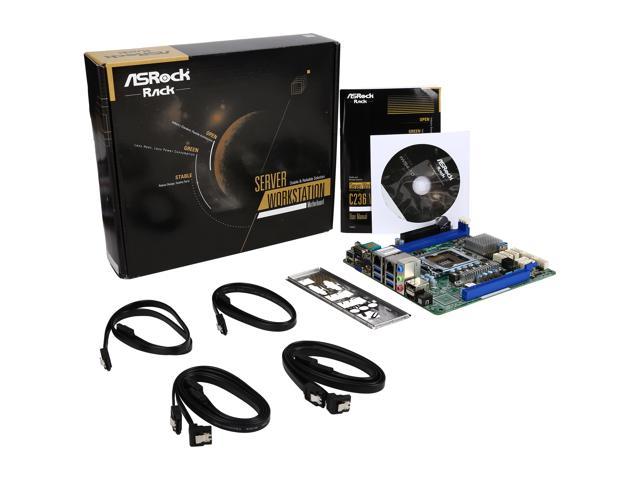 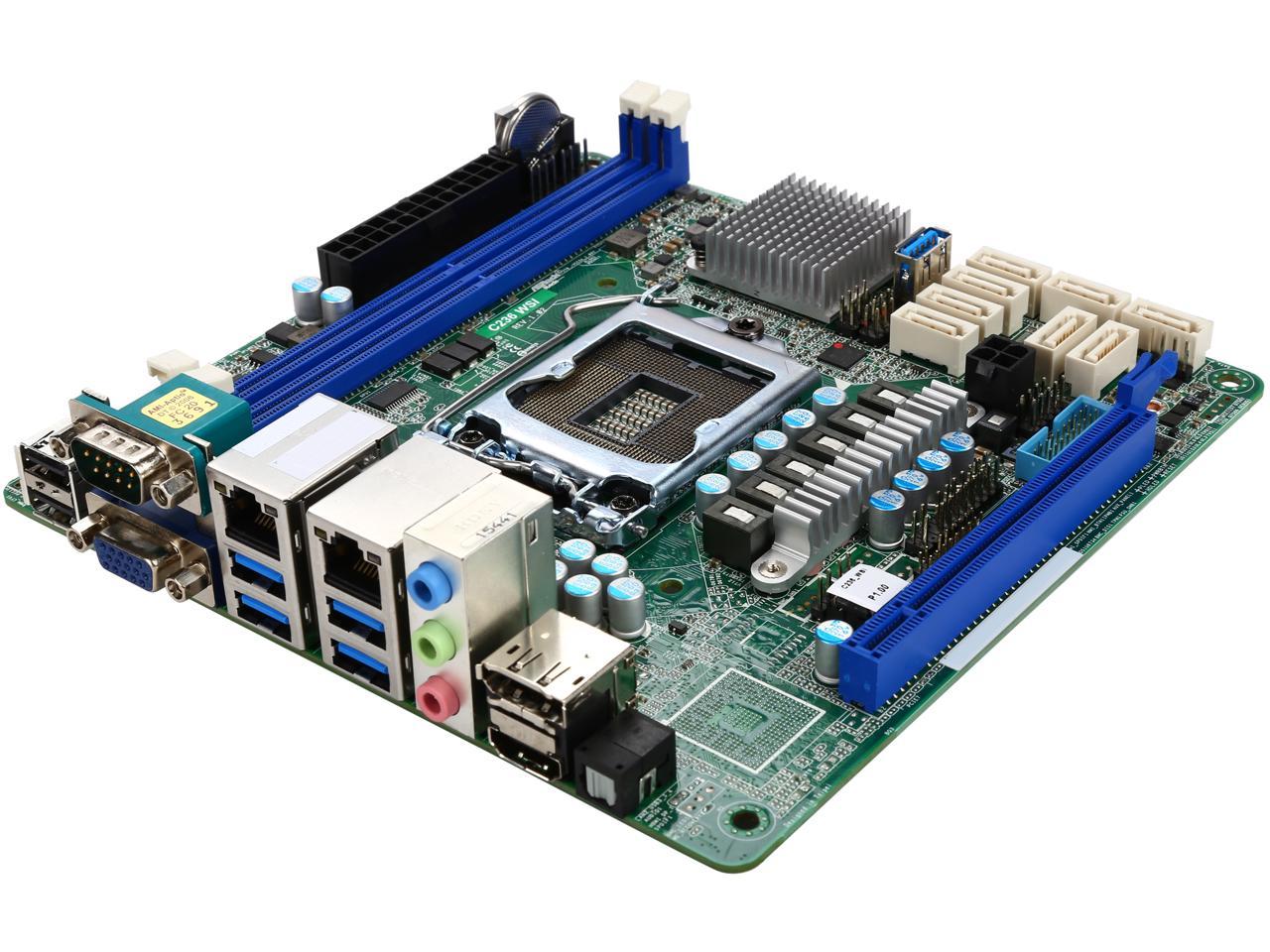 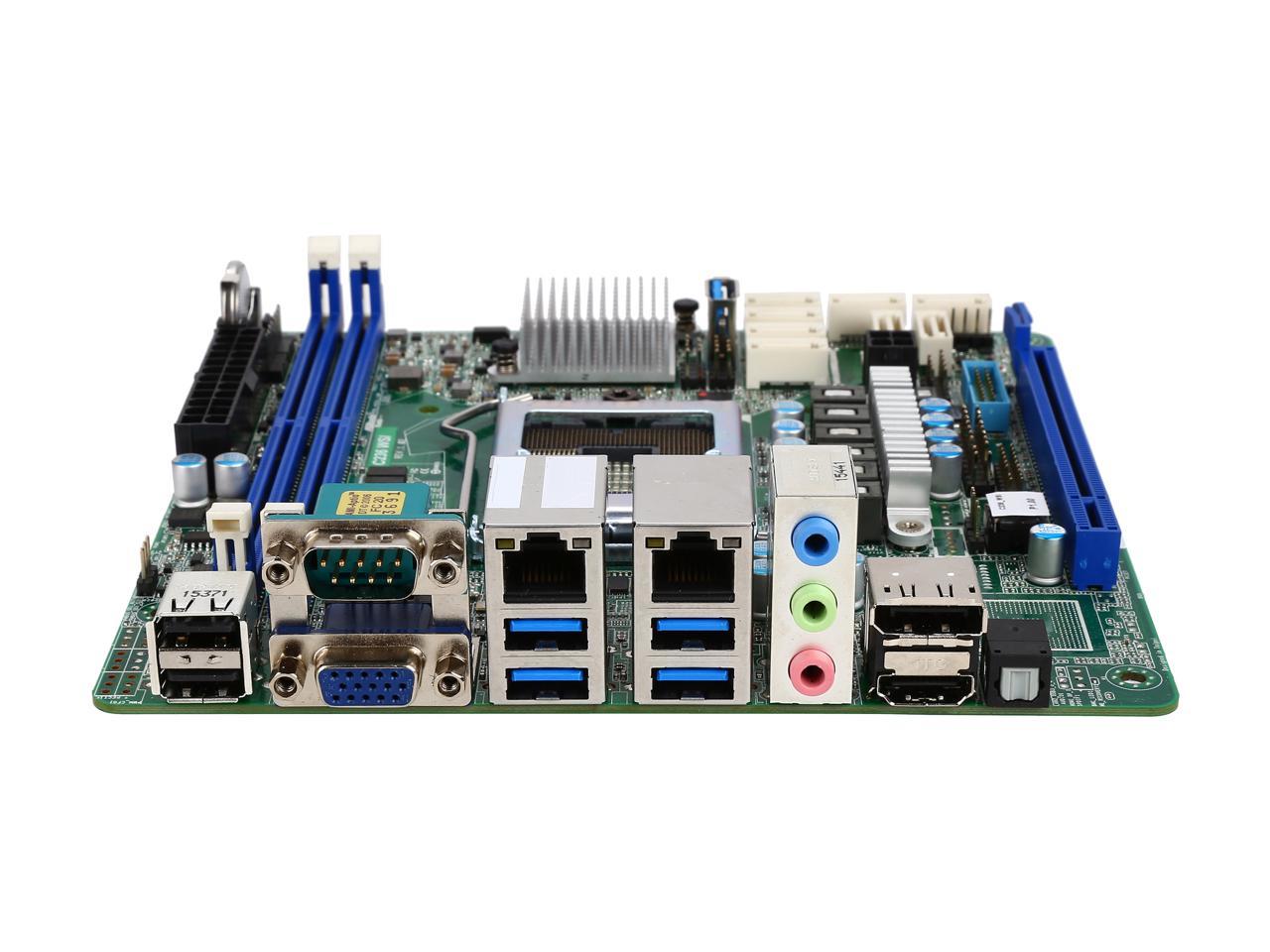 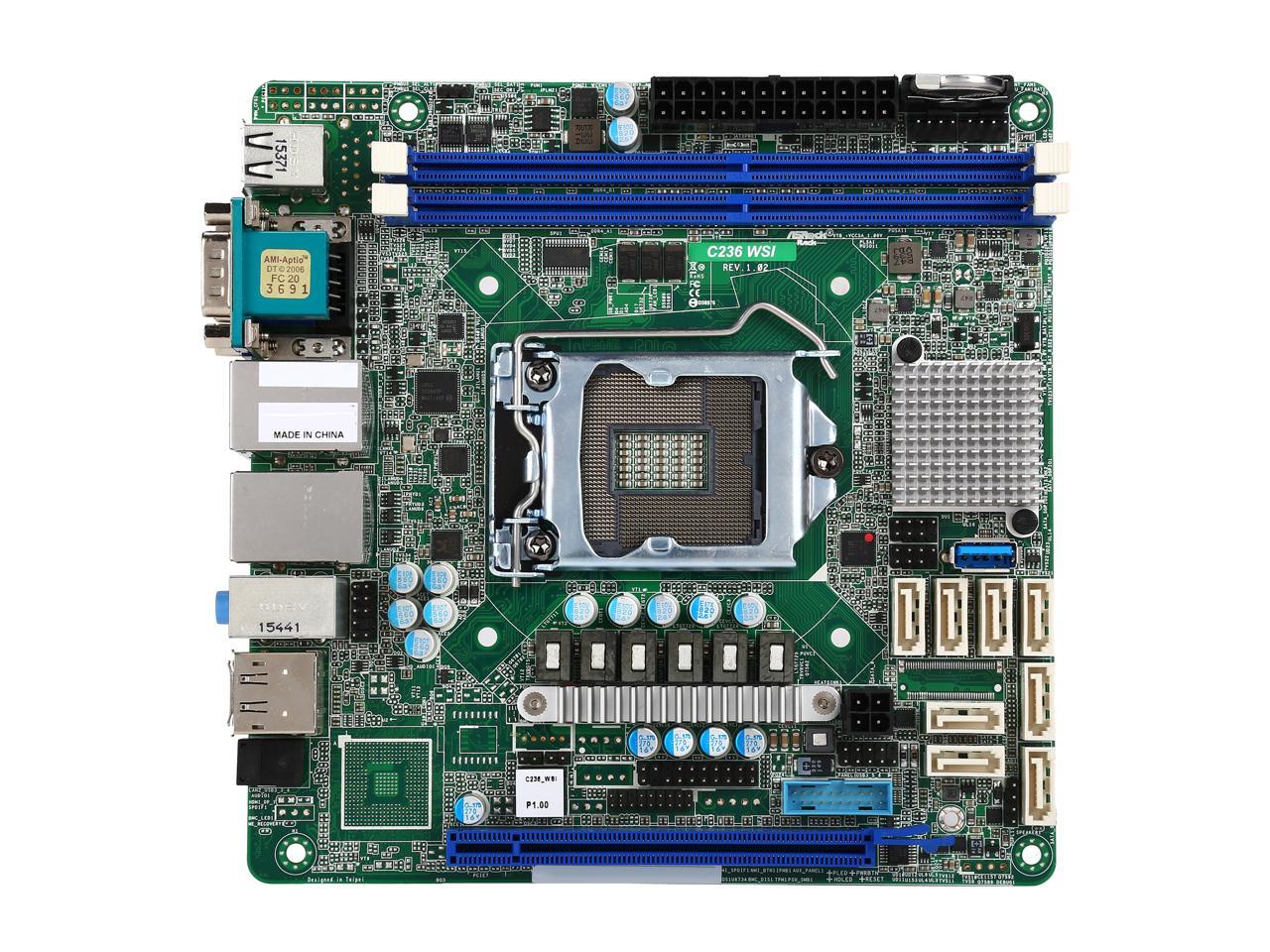 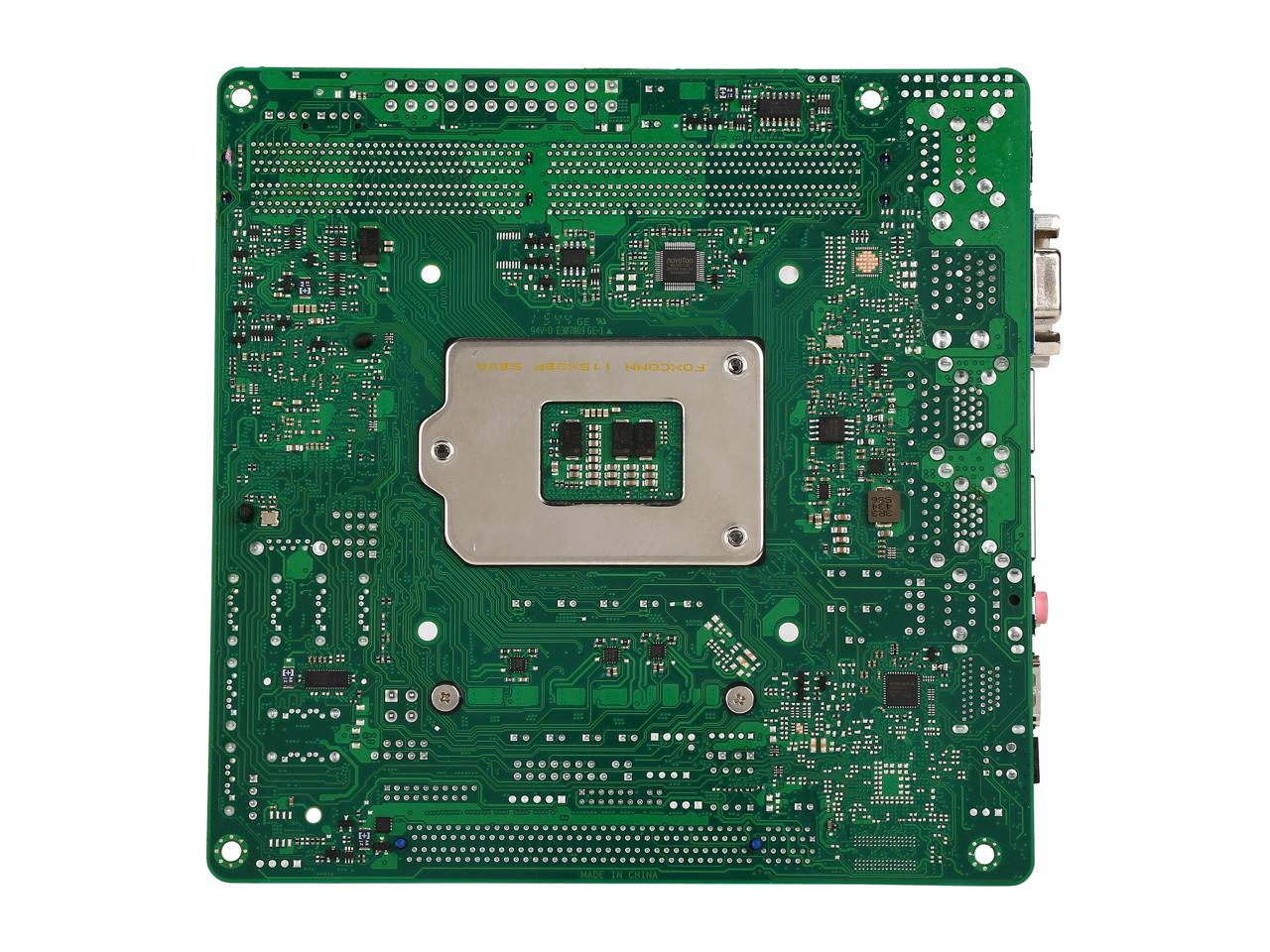 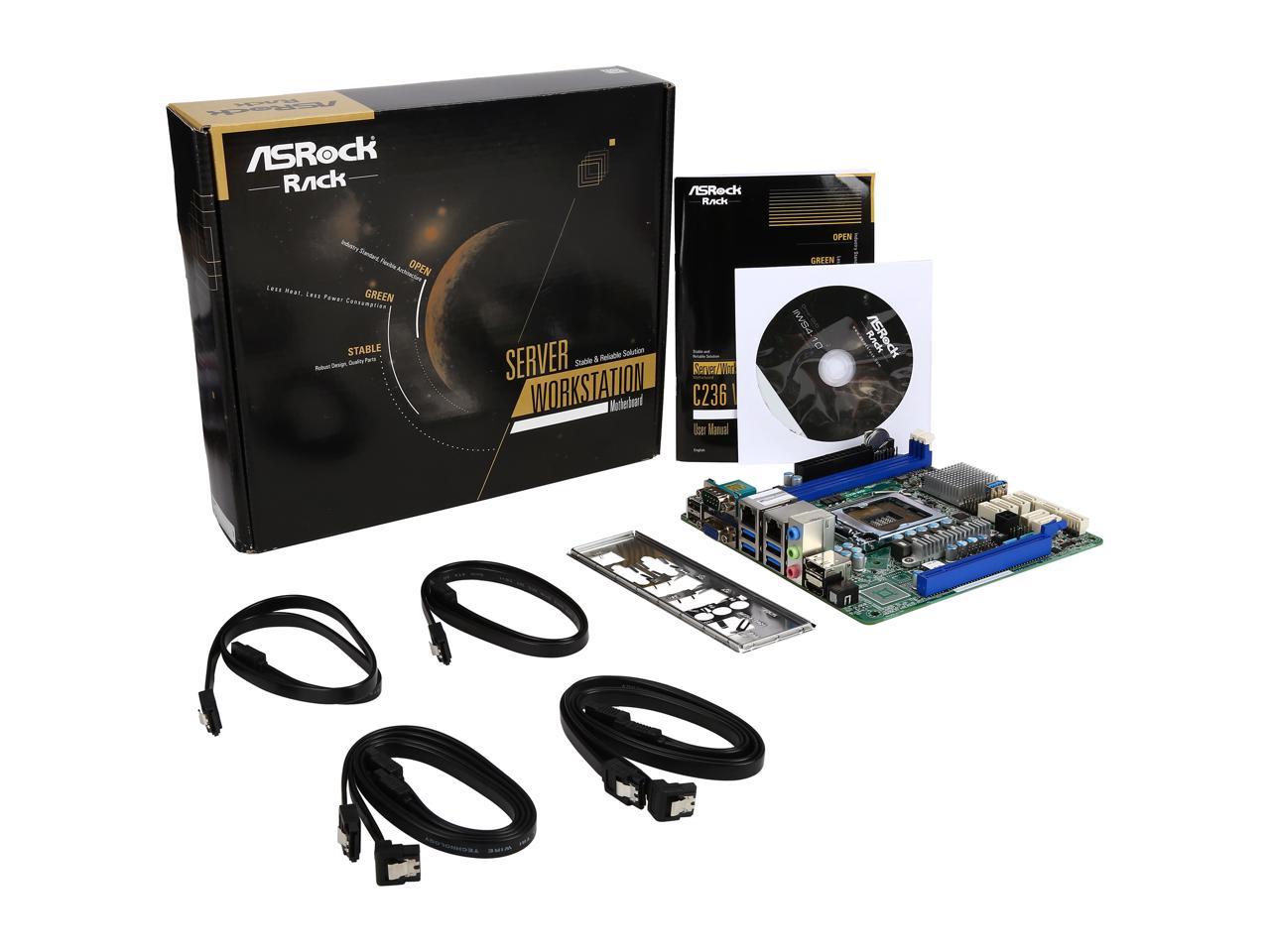 The C236 WSI motherboard from ASRock Rack is an ITX server motherboard designed for those looking to build a powerful, reliable and space-friendly server or workstation. Based on Intel C236 chipset, this single-socket board supports Intel Xeon E3-1200 v5/v6 Series processors in LGA 1151 packaging. It features a PCIe 3.0 x16 slot, and two DIMM slots that support DDR4 2133/1866/1600 ECC/non-ECC UDIMM memory with a maximum capacity of 32GB.

Despite of its small footprint, the C236 WSI comes with a comprehensive suite of I/O, like dual Intel Gigabit LAN, VGA/HDMI/DisplayPort, SPDIF (optical), and up to eight SATA III ports. And with proven ASRock quality, stability and durability, the C236 WSI is surely a robust yet compact platform for your new powerhouse. 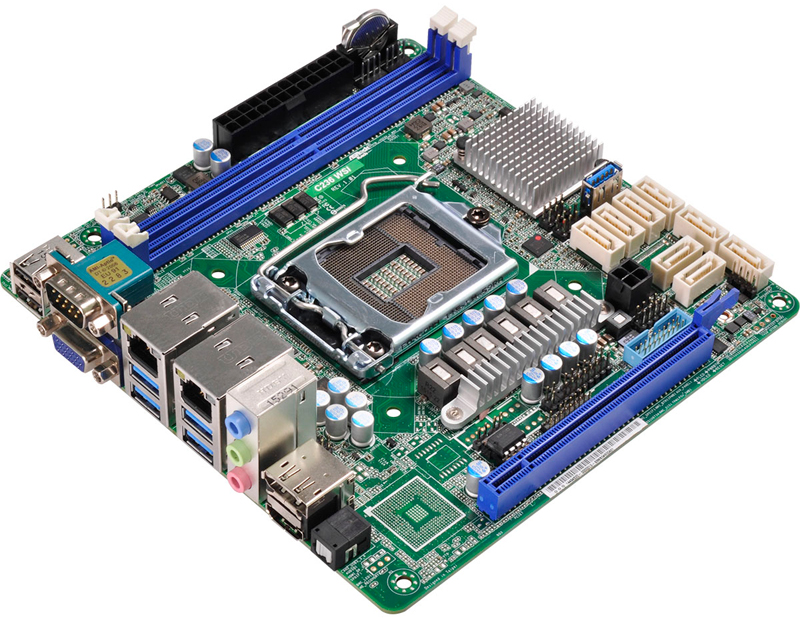 Cons: - Seriously, everything is awesome, but just a heads up, the only issue with this board is the placement of everything compared to a normal mITX board, but I used this to build a gaming rig so installing my big CRYORIG heatsink/fan is not normal and was a little tricky. I think this motherboard is meant for you to put the heatsink vertically instead of horizontally like most mITX boards, but I just had to install the RAM and smaller PSU cable before I mounted the heatsink horizontally so not really much of a problem. Also the same goes for the HD AUDIO connector, make sure you plug that in first before you install the heatsink and mount the motherboard to your case otherwise you'll need some tiny fingers.

Overall Review: I recommend this fully.

Cons: Not that it's a bad con but the 24 molex motherboard power connector is very close to motherboard ram slot which makes getting the power header connected easily if you have stubbier larger hands. An M.2 slot connector would be a nice additional feature but with 8 SATA connectors and 1 USB 3 on the motherboard for Flash drive booting it might be a con if you really wanted one.

Overall Review: Overall I'd buy this board again since I'm using it as a Windows 2012 Essentials File Server and CMS setup for Xprotect 4 IP Camera setup with plenty of room to grow. I have this in a Fractal Desgin Arc Mini 2 case and have 7 drives populated in it using the Intel RAID onboard controller. A zippier i5 cpu and flash OS drive and 16Gb of G.Skill RAM and I'm quite happy using this setup as a home IP camera recording/management system with two RAID volumes (1, and 10). It's not a game machine and is going to be a general 24/7/365 workhorse. If I ever need a bit more "power" I'll drop a Xeon processor in it and change our the ram for ECC ram. I could easily see this as one heck of a portable workstation in a smaller case used for a very stable desktop work oriented system. If you want to game it up and have a pretty UEFI GUI then I'd go for one of the other AsRock motherboards. I'm jealous I don't have this system on my desktop at work for GIS administration to replace an aging Dell Intel Xeon based workstation, but I'm very happy with this motherboard. Buy the right pieces and you'll have a very nice system that is more reliable than the uber game performance machines you can get for less money. If you want a rock solid sleeper that will impress you then I'd recommend this. I did contact support several times to have several questions answered about header pin connection and driver support and Asrock support US answered back in 24 hours and were very helpful. I'd say with performance, reliability, and support I'm quite happy with this motherboard purchase!

Cons: Terrible memory support, I blame BIOS bugs. I got Kingston with Hynix modules and MB would only boot with A1 slot populated, but not with both or B1 slot. I got replacement MB and the same behavior. I got replacement from Kingston with Micron modules and could barely boot with 2.40 BIOS. Over the months I noticed random instant restarts with "kernel lost power" in the event viewer and can't pinpoint the problem. Ran memtest and Intel CPU diagnostics tools and burn in, all pass. William from ASRock is responsive and sent me new BIOS versions to test including 2.60 which didn't boot. I found that I could only boot with B1 memory slot populated and not with A1 or both populated. What I found interesting in all cases is if I boot with only one slot populated and then in BIOS change memory speed from 2400MHz to 2133MHz, then MB boots with all slots populated and with all tested BIOS versions. If you flush BIOS, all settings are lost and you are forced to do memory pulling again. Look up reviews for ASRock E3C236D2I on NewEgg. Others have similar issues and the MB seems to be coming from the same designs. This MB has slight coil whine, noticeable if you have no moving parts in your computer.

Overall Review: I do NOT recommend this MB to anyone. I wanted to build a tiny workhorse, but the amount of time spent debugging it is just not worth it. It is almost impossible to find comparable feature set in Mini ITX form factor from other manufacturers. If I had to do it again, I would just go with Micro ATX from Supermicro.

Manufacturer Response:
Dear Maksim, Thank you for your feedback! Please rest assured, we are continuing to look into the memory stability and it’s believed that improvement could be done by BIOS update. Please check our BIOS update web page often to find BIOS update. And if I have the BIOS update first hand, I will surely contact you with it first. Thank you for your patience. William Lee ASRock Rack Support Email: william@asrockamerica.com URL: http://www.asrockrack.com Support Email: http://event.asrock.com/tsd.asp?ln=en
Robert A.
Ownership: more than 1 year
Verified Owner
Smooth setup, still a few nits3/7/2018 9:23:55 AM

Pros: Lots of SATA connectors, good amount of USB 3.0, ECC support. Despite being a two year old product, they updated the BIOS for the Spectre/Meltdown stuff.

Cons: Windows 7 event viewer complains of memory corruption coming out of sleep. It seems like it is supposed to be harmless, but might be sloppy bios code. Initial board eventually had to be replaced due to issues returning from sleep. William was quite helpful and responsive for me too. Power LED output does not seem to work on my board.

Overall Review: Upgraders note that ITX confines mean no USB 2.0 header, only USB 3.0. Also, after about a year developed instability. Magically, about that time a new BIOS came out and returned it to the usual rock solidness.

Pros: 8 SATA ports internal USB 3.0 port so you can install OS on flash drive and have the drive inside the case. dual gig-e ECC (unbuffered) support xeon support overall great board for building a freeNAS setup

Cons: You need to pull the ram to be able to unplug the main power connector. Could use an extra set of system fan headers to support NAS cases that use more than one system fan. Had to replace my NAS case fans with fans that could run off molex power to work around the issue.

Pros: The motherboard does everything it's supposed to do without any issues. There's not much else to say about it. The main reason I'm writing this review is to express how pleased I am with their customer service. When I originally purchased this (about 9 months ago), it didn't support Kaby Lake CPUs yet. In fact, the updated BIOS wasn't even available on their website at the time. Unfortunately, I didn't realize that until it was too late and was stuck with a non-functional system. I called ASRock Rack support and they mailed me a new BIOS chip with beta Kaby Lake support, completely free of charge. Everything worked fine after that. Another thing which was reassuring was that yesterday, I emailed them to ask if they had any plans on releasing an updated BIOS to fix the recent vulnerabilities that were discovered in the Intel ME (see: Intel-SA-00086). They confirmed (the same day) that they will be releasing an update and that it's currently a work in progress. While this may not seem like a big deal, there are other vendors who basically abandon support for their products after a few months.

Pros: Had this for 5 years now with no hiccups. Run a usenet plex server off it with 6 drives in a ZFS pool

Overall Review: Running this on a server with a little 350w FSP PS. Runs like a champ.

Cons: First board was DOA. ASRock replied to my review trying to pass the blame onto me, saying I could be using the wrong processor, and suggested that if I was using Kaby Lake that they would sell me a new BIOS chip. This wasn't the case, I was using an i3 6100, which is compatible out of the box. Newegg replaced the motherboard, now the 2nd one has died 3 months later. Board simply will not power on. I've tested the PSU and other components, it's definitely the board.

Overall Review: ASRock is getting a lot of praise these days for their Ryzen boards, but we simply cannot ignore their history. One generation of good products does not excuse a history of failures. This is now the 4th ASRock board I've had problems with and you can check reviews on a lot of their other products prior to Ryzen, they have never been a good manufacturer. I can assure you, I will never buy one of their products again. I should have went with SuperMicro for my server. Don't make the mistake I did, pay a little more and get a better board.

Manufacturer Response:
Dear anonymous, We don’t blame user for whatever reason unless there was a physical damage. What we have suggested instead was check the BIOS version that came with the board. If it’s not the latest BIOS version that supports Kaby Lake CPU, we are always happy to send you a preflashed BIOS chip replacement, as you also mentioned. If it was a blame, we wouldn’t have genuinely offered a BIOS chip. As far as our server products go at this moment, we do not have one platform that runs on Ryzen. You were talking about two entirely different platforms here. So, apple-to-apple comparison is not applicable in this case. If you have run into an issue to the C236 WSI, simply send us the unit. We will help you test out the unit and verify with you whether or not we could duplicate the Power On Failure. Thank you! ASRock Rack Support Email: http://event.asrock.com/tsd.asp?ln=en