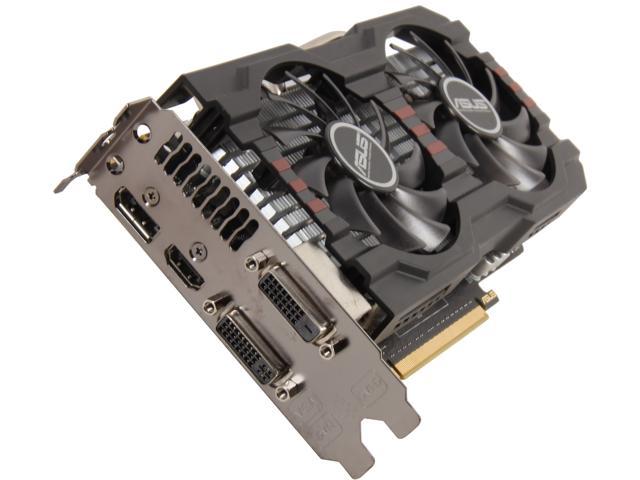 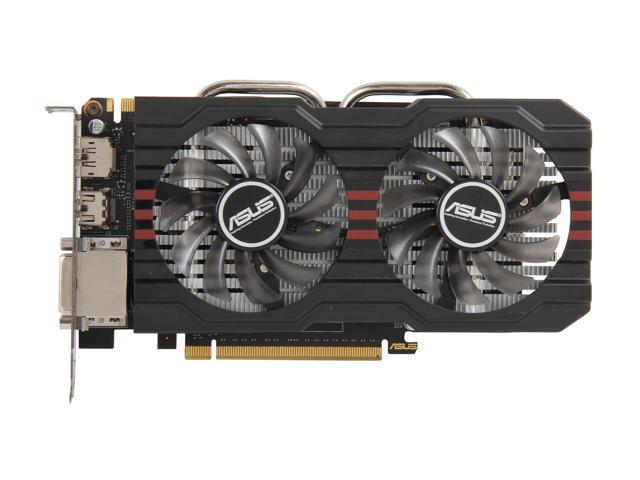 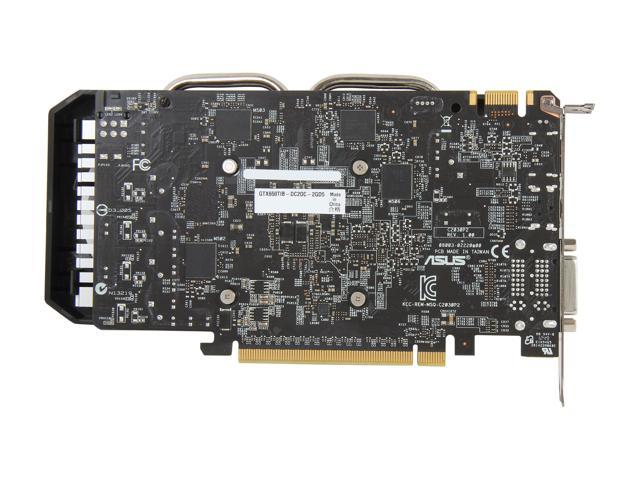 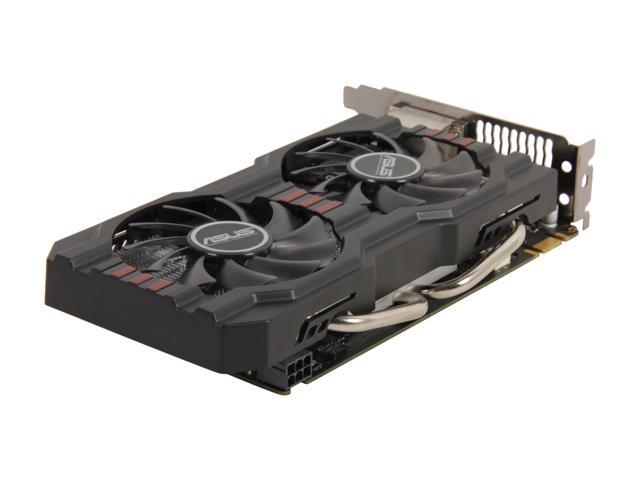 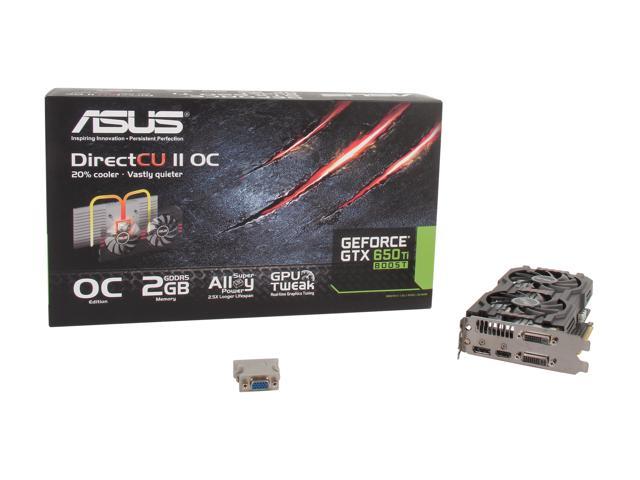 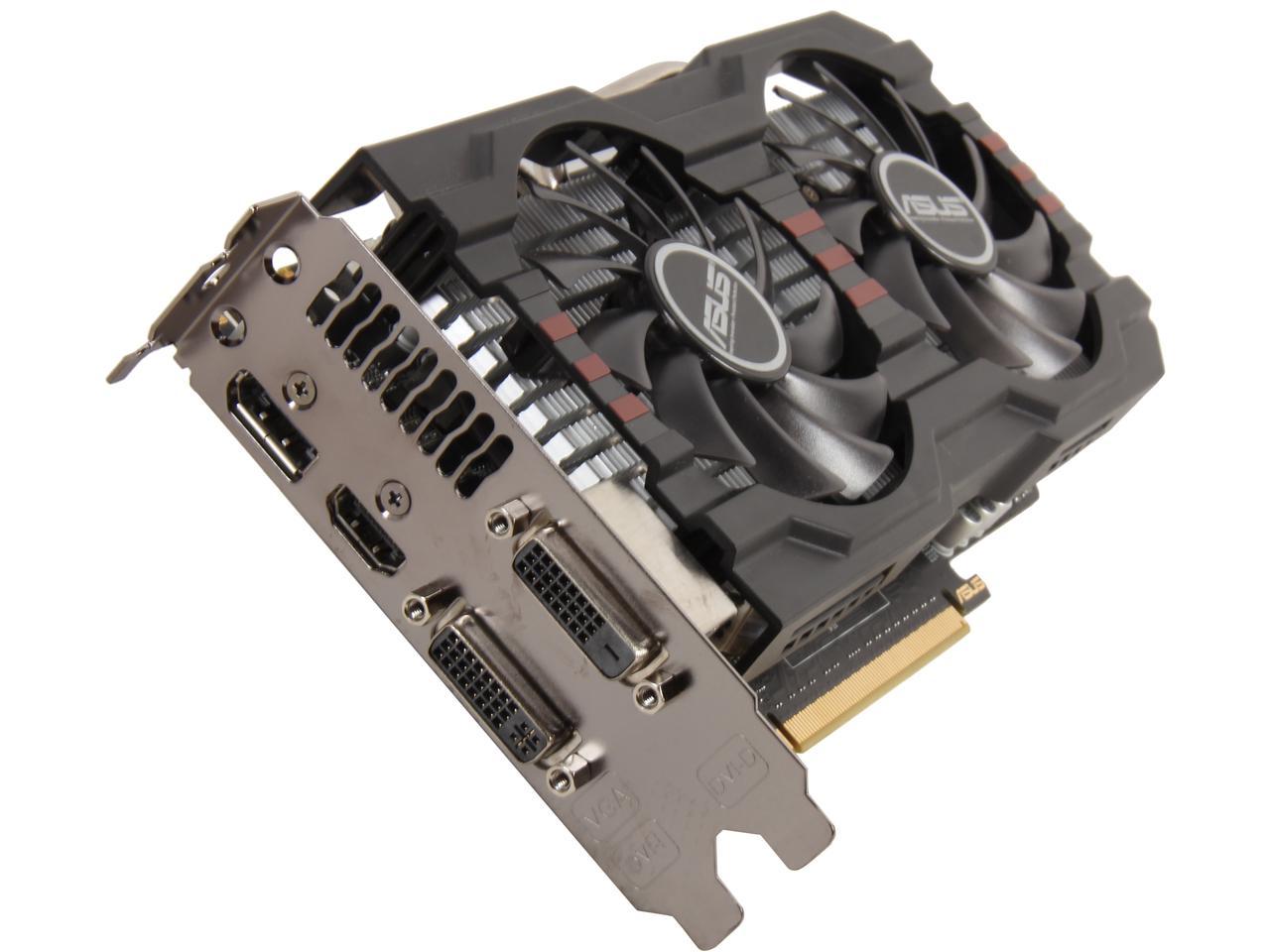 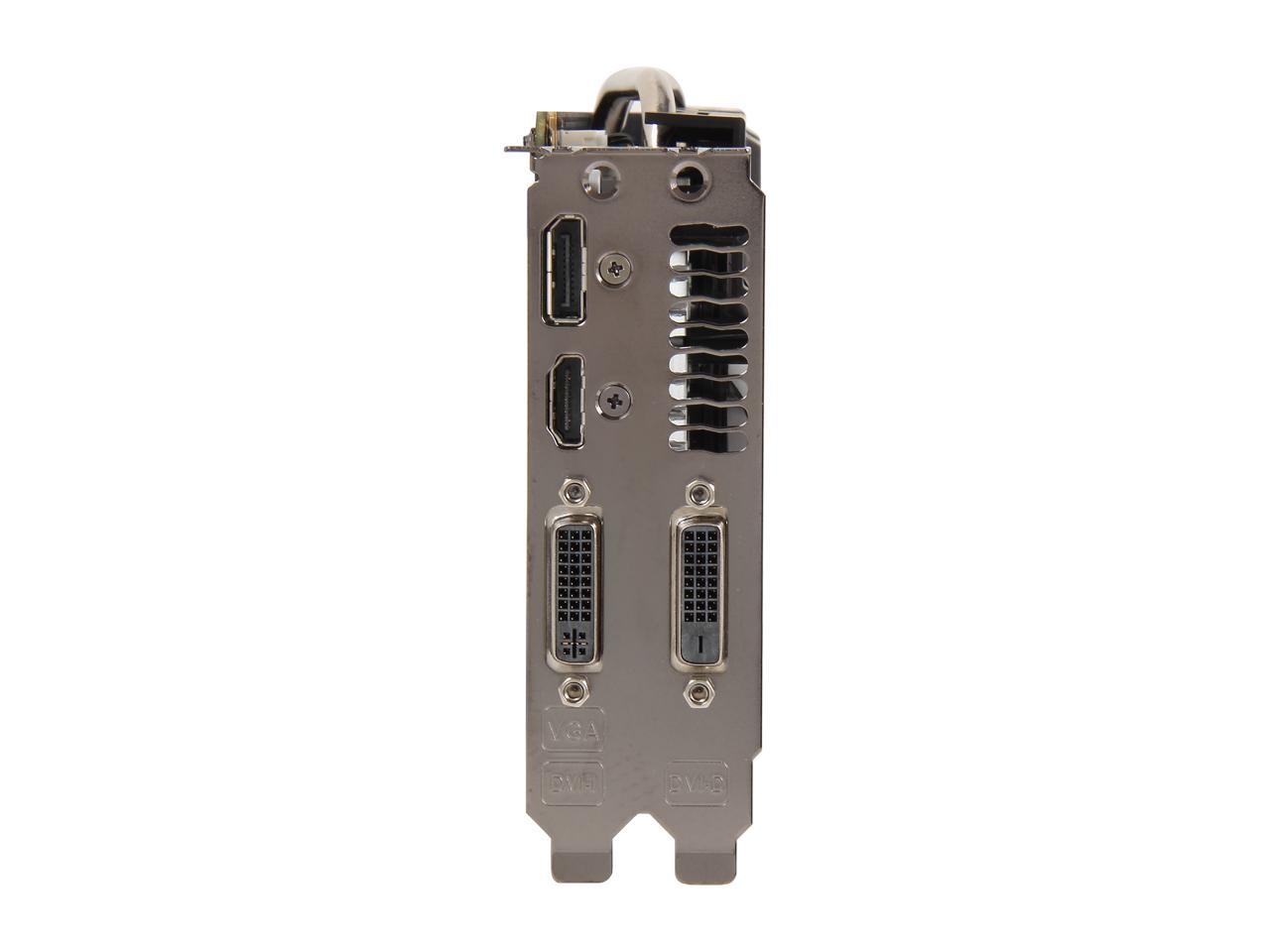 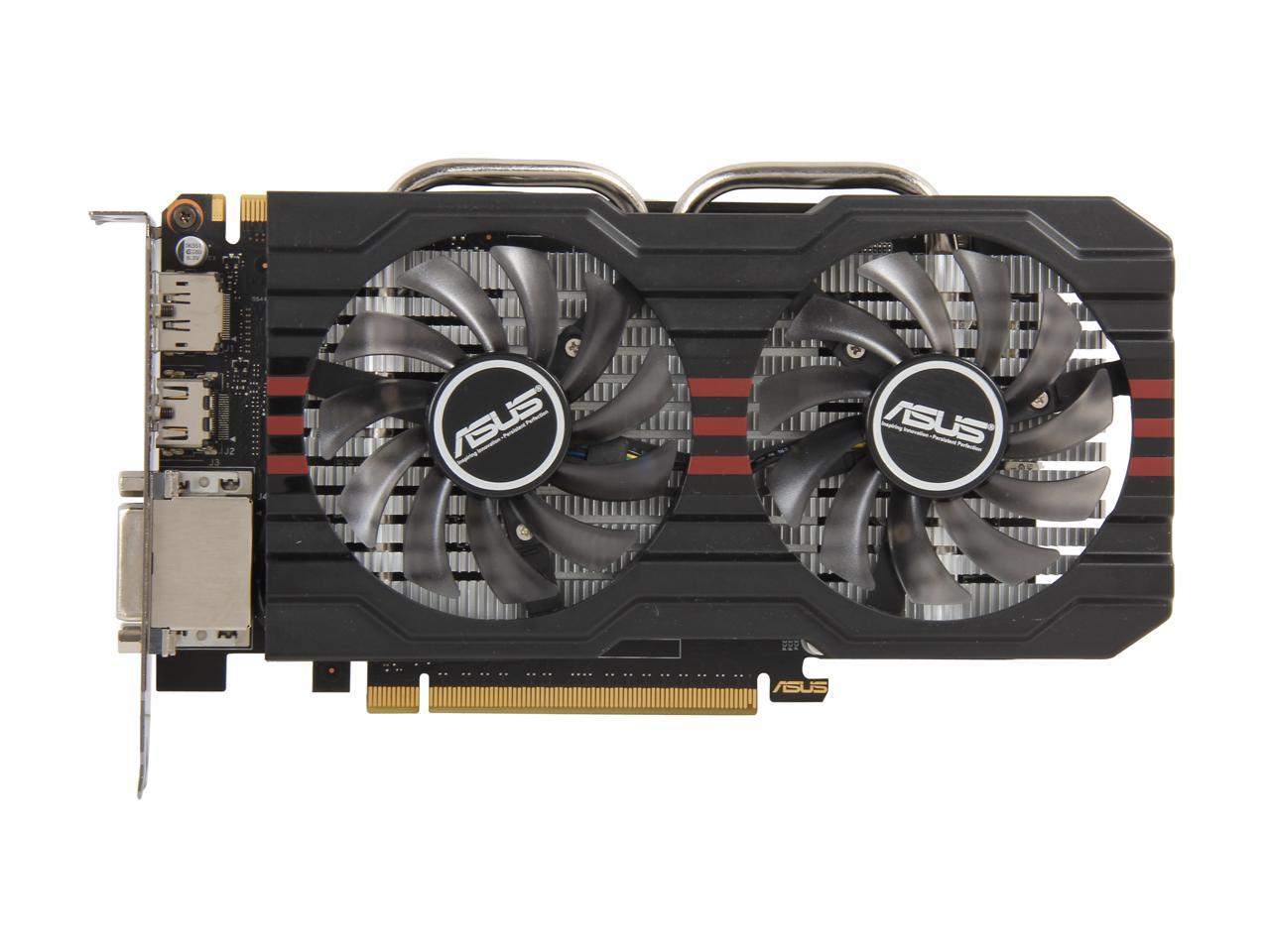 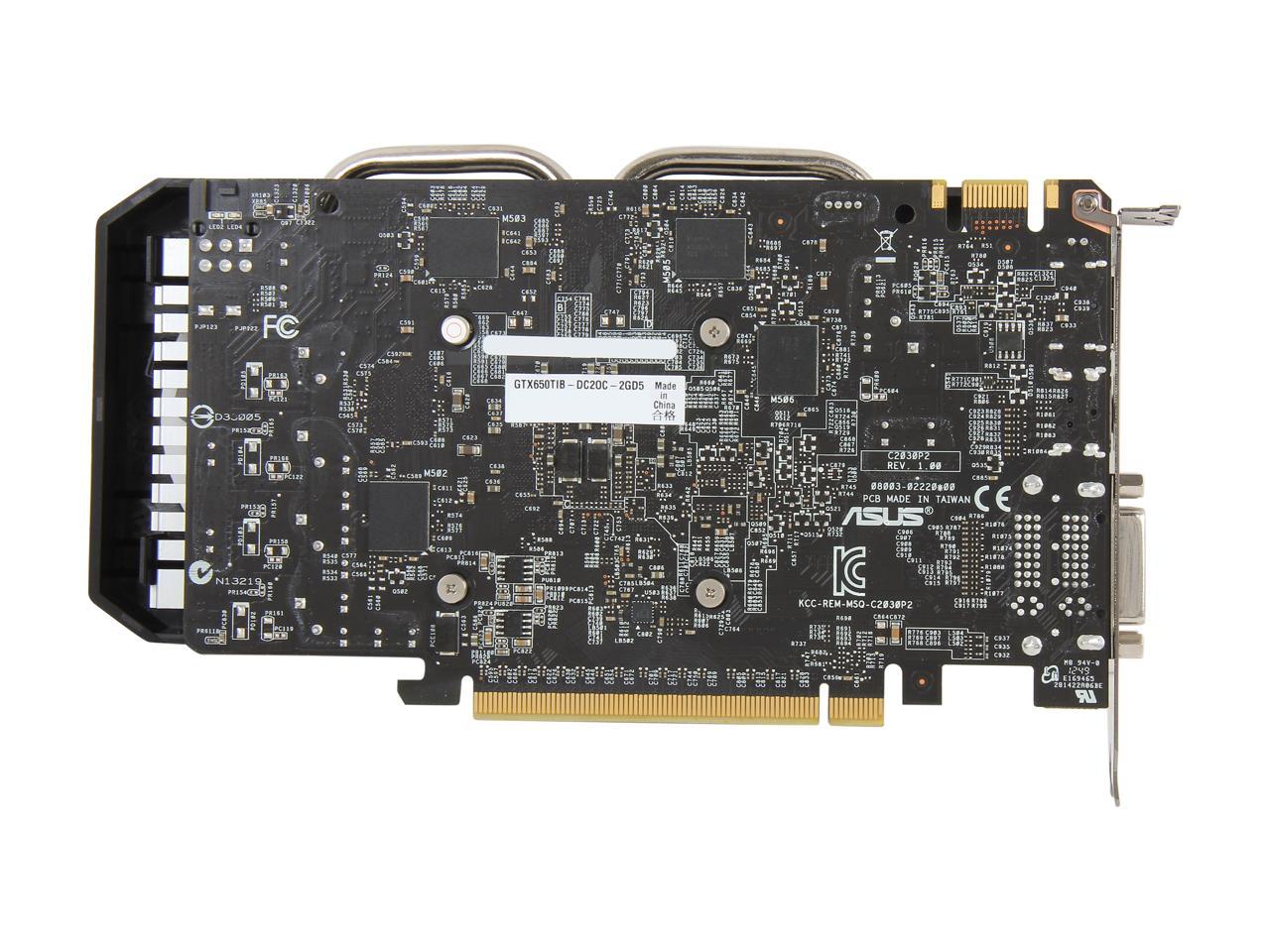 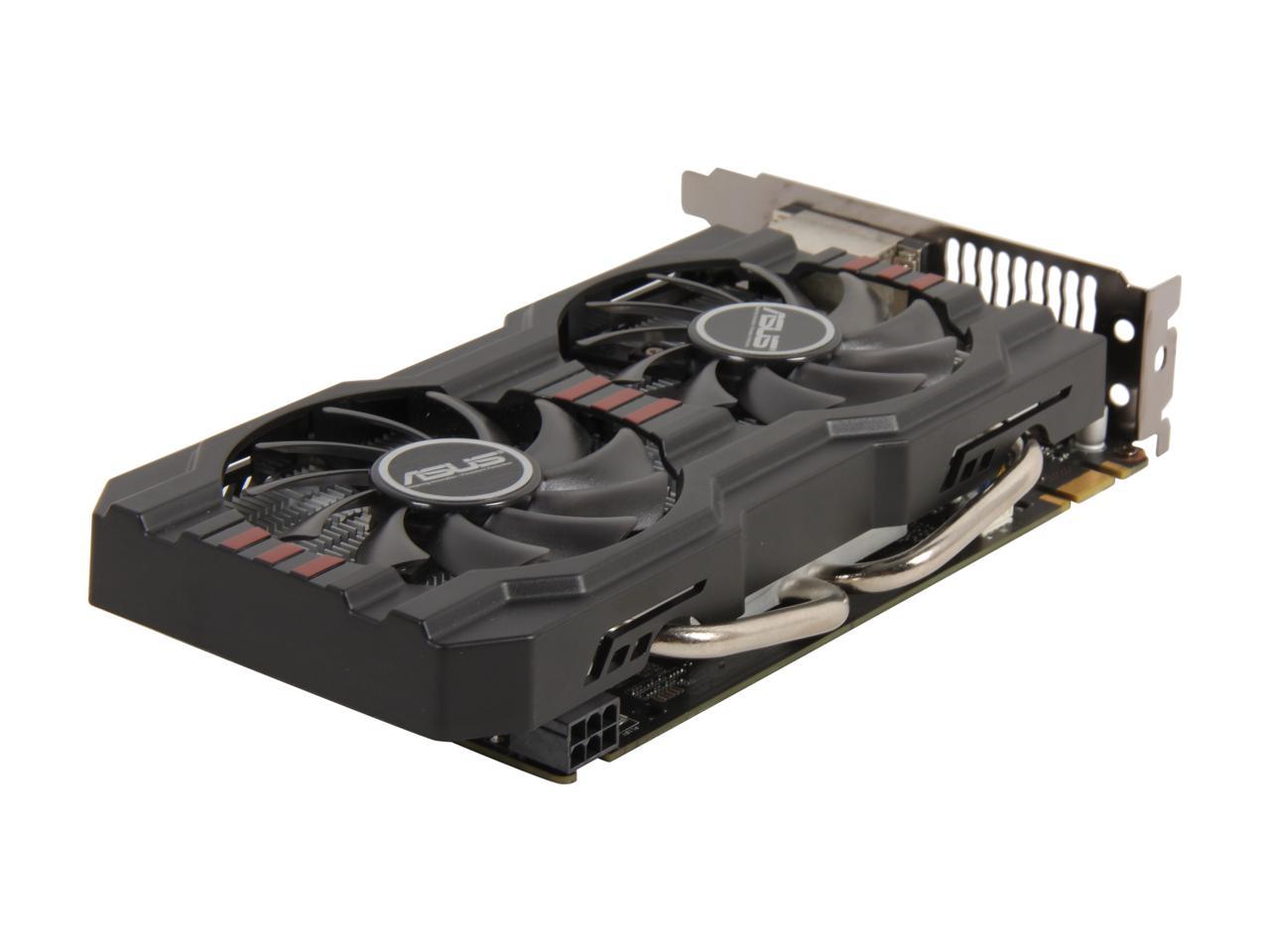 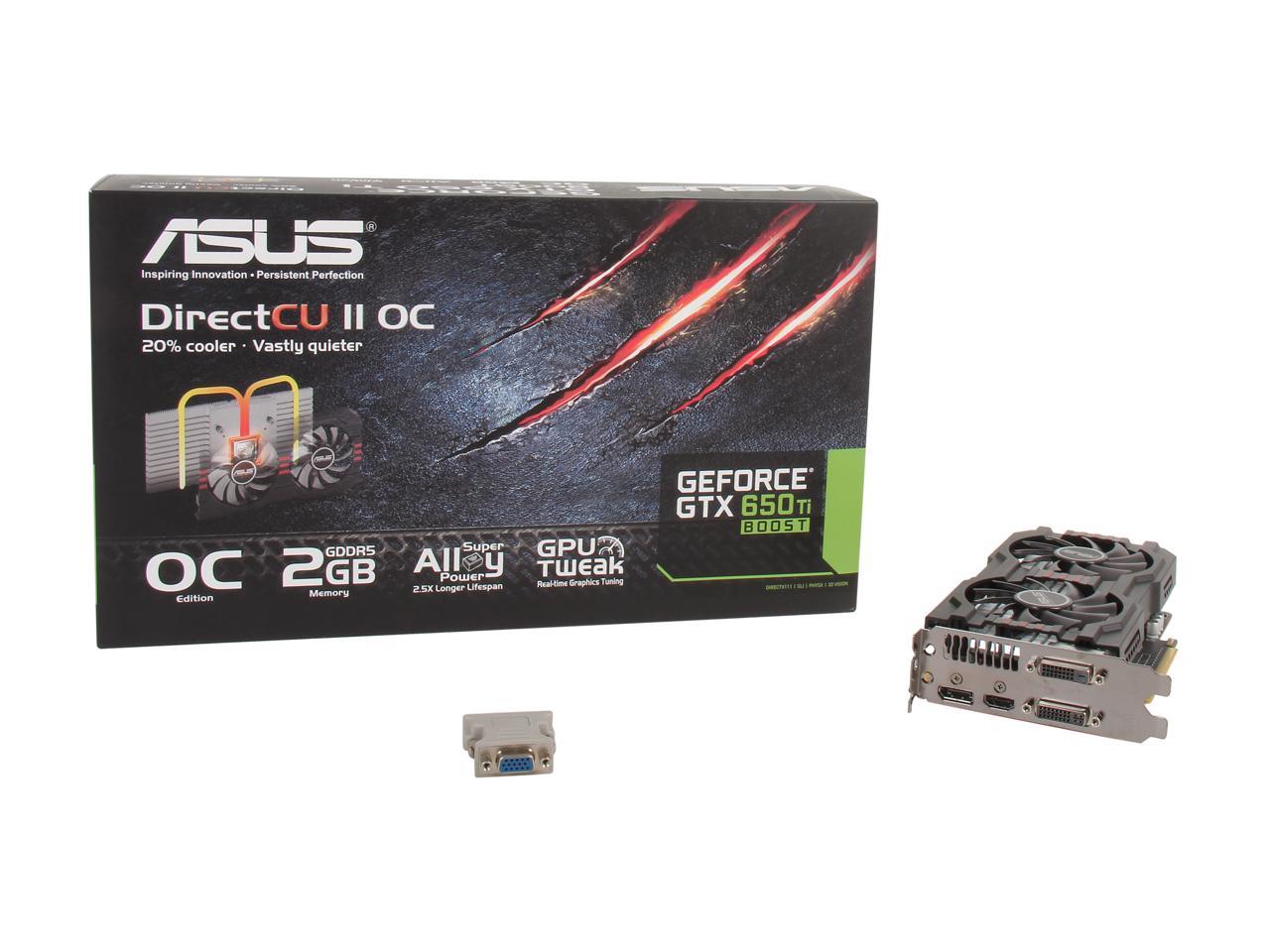 This ASUS GTX650TIB-DC2OC-2GD5 card features OC-selected 1085MHz core - a 52MHz increase - for smoother gameplay. Premium alloys in power delivery components defeat the heat and last two and a half times longer than their predecessors. Dual fans with direct-contact copper heatpipes ensure superior cooling capability and ultra low noise level. The proven ASUS build quality and reliability rounds out the reason why this card is a must-have!

Learn more about the ASUS GTX650TIB-DC2OC-2GD5

Pros: Just bought another for SLI and it's working great. I did 3dmark and noticed a big improvement. Low power consumption allowed me to have two video cards on a corsair 500w Power supply

Overall Review: Did have a minor issue with the driver. After installing the card and drivers my PC booted to a black screen. Hard reset and re-installed the drivers and everything is working.

Manufacturer Response:
Greetings, Thank you for your review on the GTX650TIB. We appreciate all of our customers' feedback and this is no exception. Should you have any questions or comments about the video card, please let us know, we are here to help. Your reference number for this case is 3130556. For support information, please visit http://support.asus.com. For service, visit http://service.asus.com. For warranty, visit http://www.service.asus.com/#!Graphics Card Warranty/c26b; Refurbished products/accessories: http://www.service.asus.com/warranty.aspx#!refurbished-warranty/c16us. For RMA status, visit: http://am.eservice.asus.com/rmaweb/search/rmCustomerQueryAction.do?. Regards, Mark ASUS Customer Loyalty cl-mark@asus.com
Anonymous
Ownership: 1 day to 1 week
Verified Owner
Worth the Extra $$4/8/2013 10:08:05 PM

Pros: I bought 2 cards, these cards come overclocked from the factory and paired with an ASUS motherboard these cards overclock themselves even further. A wise investment if your building an Asus system, just make sure you get a Gen3 Motherboard for PCI-E 3.0.

Cons: Not much to complain about here I have to admit.

Overall Review: Asus has the BEST RMA process and warranties on the market you will be taken care of if your product breaks.

Pros: I bought two of these and have them on an ASUS M599FX PRO 2.0 Mobo and an AMD Phenom II x 4 965 processor with the OEM cooler, 32 GB Corsair 1866 RAM. I turned in a 3D Mark/Firestrike benchmark of 3266, granted, everything was overclocked close to max, but that even compares very well against a single GTX 770 reference card. I can play Metro Last Light, WoT on the highest settings. My CPU doesn't like that with the stock cooler on it, but I'm not reviewing the cooler. I absolutely would recommend two of these cards to anybody on a lower mid-range budget. I love ASUS quality in all their products and these cards are no exceptions

Cons: I have had zero problems out of either of these cards even when both the Boost and Memory clocks are nearly maxed with the ASUS GPU Tweak.

Overall Review: Buy one and if you can't afford it right away, save and get a second. You won't regret it.

Cons: None yet... Other than the fact the price dropped $30 in the last couple weeks!

Pros: This card can run pretty much any game on high to ultra aka Battlefield 4,Crysis 3,COD Ghost and Batman Arkham Origins, I was replacing 2 Slied Gtx 460s that went out on me out of no where and i have to say this card is 10 times better, it's more quiet and cooler. I haven't used the Asus Gpu tweaker yet but when i have to from what i seen after installing it, it'd be easier to get more power out of the card. Also i was scared buying this card looking at it in the screenshots and even getting the box made me think it wasn't gonna fit in my case but when i got it out of the box it was smaller then 1 of my gtx 460s and they only have 1 fan on them. Last Pro this card only uses a 450watt PSU i was in the market for buying a 700 series card but finding out they need way higher Power supplies i said screw it and went for a 600 series TI card and this was well worth it.

Cons: I haven't seen any and i don't think i will. Um i'm not sure if it's just my card or not but i don't hear the fans (which is awesome) on it but when i run a game like BF4 or something that needs a lot of power to run the GPU fans make a werid noise like something is hitting the fans but not effecting it in anyway more like when you take a piece of paper to a high speed fan and it makes that kind of noise. That 75 dollar ingame card is worthless to me and should of been replaced with a video game worth 59.99 and not ingame content on 3 games i don't even play.

Overall Review: I bought this card for 149.99 and 1 day after it went up 20 dollars or 30ish that's with tax. which isn't a big deal for me but funny how they just do things Still really hate that Nivida geforce game card worth 75 dollars.....

Pros: My build: Intel i7-4770 CPU with stock cooler (not overclocked) Asus Z87-Plus motherboard 32 GB of Kingston KHX16C9P1K2/16 RAM (4x8GB) - from Asus compatibility list for this motherboard 2x2TB internal hard drives - WD Caviar Black WD2002FAEX Pioneer BDR-2208 Blu-ray drive (retail, includes software for Blu-ray playback) Asus GTX650TIB-DC2OC-2GD5 GeForce GTX 650 Ti BOOST graphics card SeaSonic M12II 620 Bronze 620W power supply Windows 7 x64 I am not a gamer but interested in 3D from the point of view of software development. I initially used graphics built in Intel i7-4770 CPU but frame rate was low (sometimes about 1-2 FPS) on some of the advanced 3D demo applications. So all I wanted is noticeable improvement in 3D frame rate for reasonable price and in quite package. This card delivers just that. In 3D Mark tests it delivers 4x-6x frame rate improvement comparing with i7-4770 graphics ***FOR GRAPHICS BOUND TESTS***. This is important to notice because some of the tests are CPU bound and you will not see any improvements there. Hence, your composite score may not be 4-6x higher. When idle the card is inaudible to me. When under the load it is still very quiet. It can drive 4 monitors itself and and can work in combination with your on-CPU graphics card BUT when I was testing it in combination with on-board graphics I had some strange screen flickering at some point (not all the time). Never investigated it much because I don't intend to use it in this mode. I use original Nvidia drivers.

Pros: The card is perfect, It's my brothers early Christmas present and he loves it. I installed it and no issues since then.

Cons: Newegg... When I purchase a NEW part I expect it to come in a properly sealed box. This box had obviously been opened and the card was handled. It was even missing some of the rear I/O covers. Had this card come in a sealed box it would have been under the tree Christmas morning. Because it was opened I had to test it earlier to make sure it worked properly.

Overall Review: I got my stepdad's PC after he bought a new one last year. It was 7 years old, running a AMD Phenom II X4 940 along with a 8800GT OC by BFG. I got an upgrade and it was noticeable. The old card ran Arma 2: DayZ Mod on pretty low settings, and I had to play on low population servers while getting around 15 FPS. I get 30 on max now of servers with 60+ players on now. Also ran BF4 Beta at around 30-40.