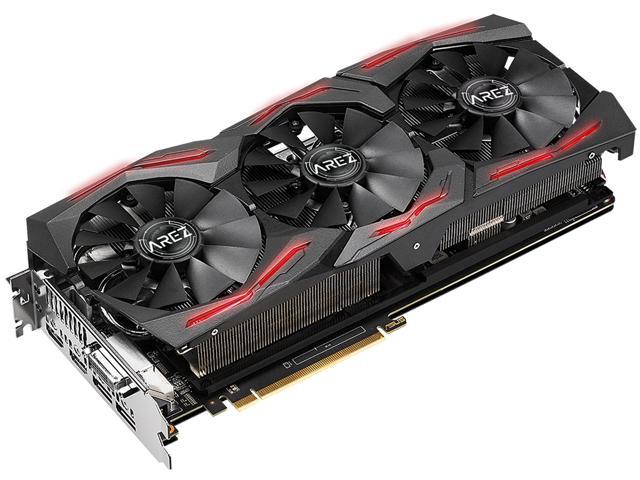 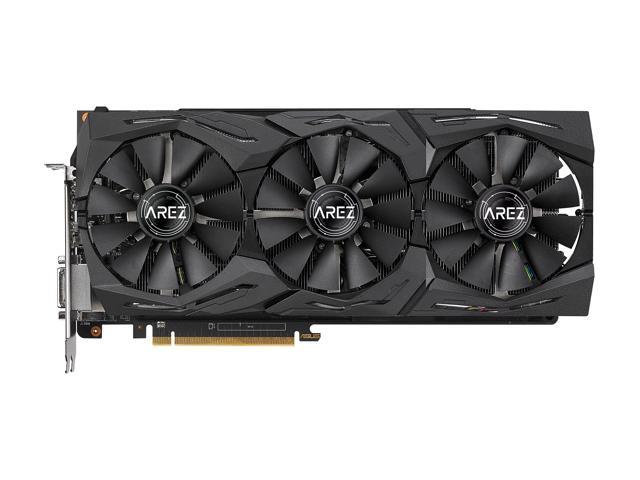 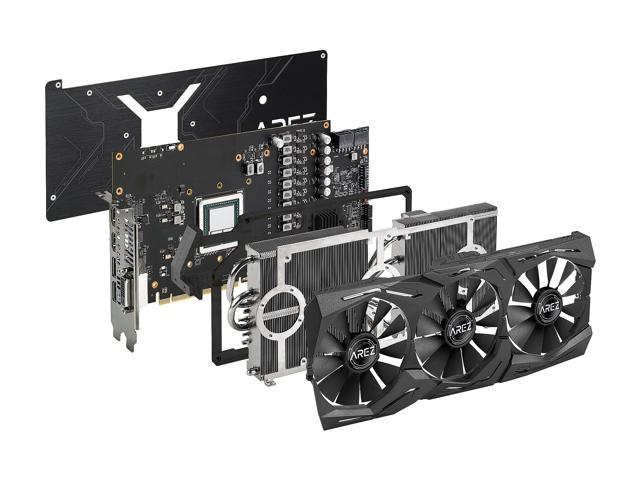 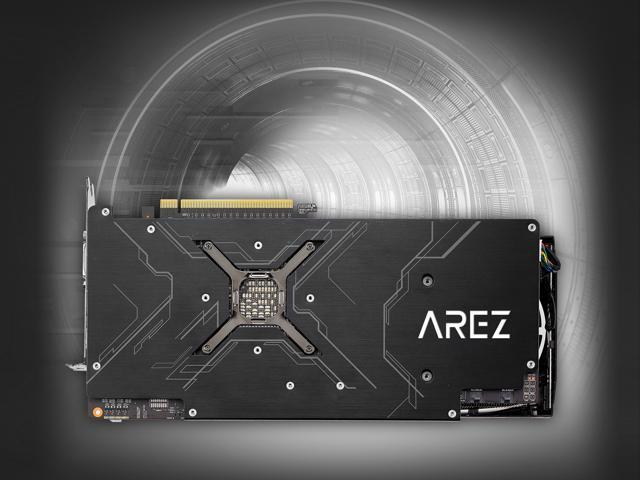 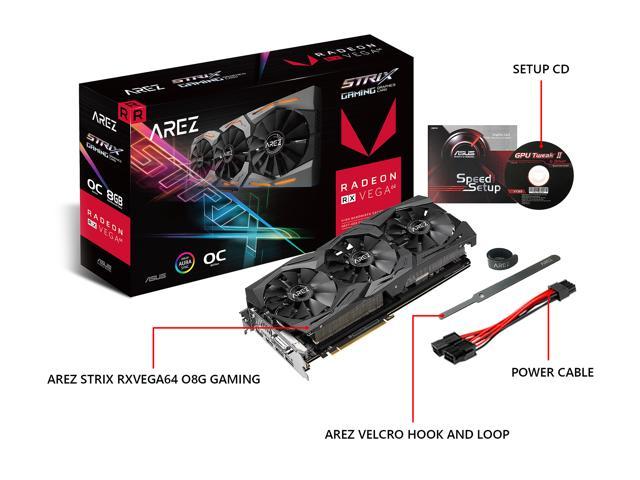 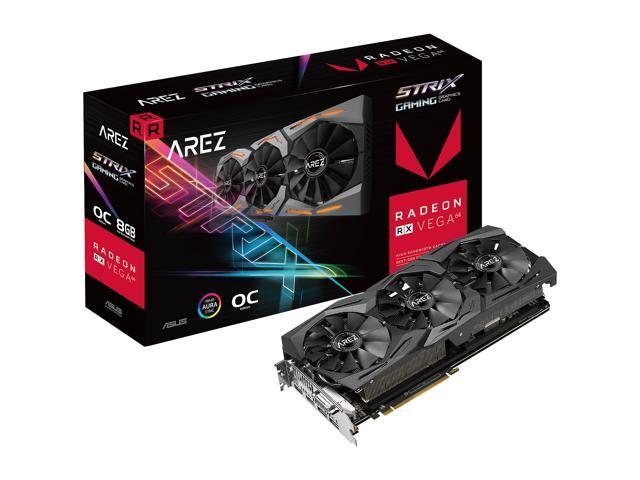 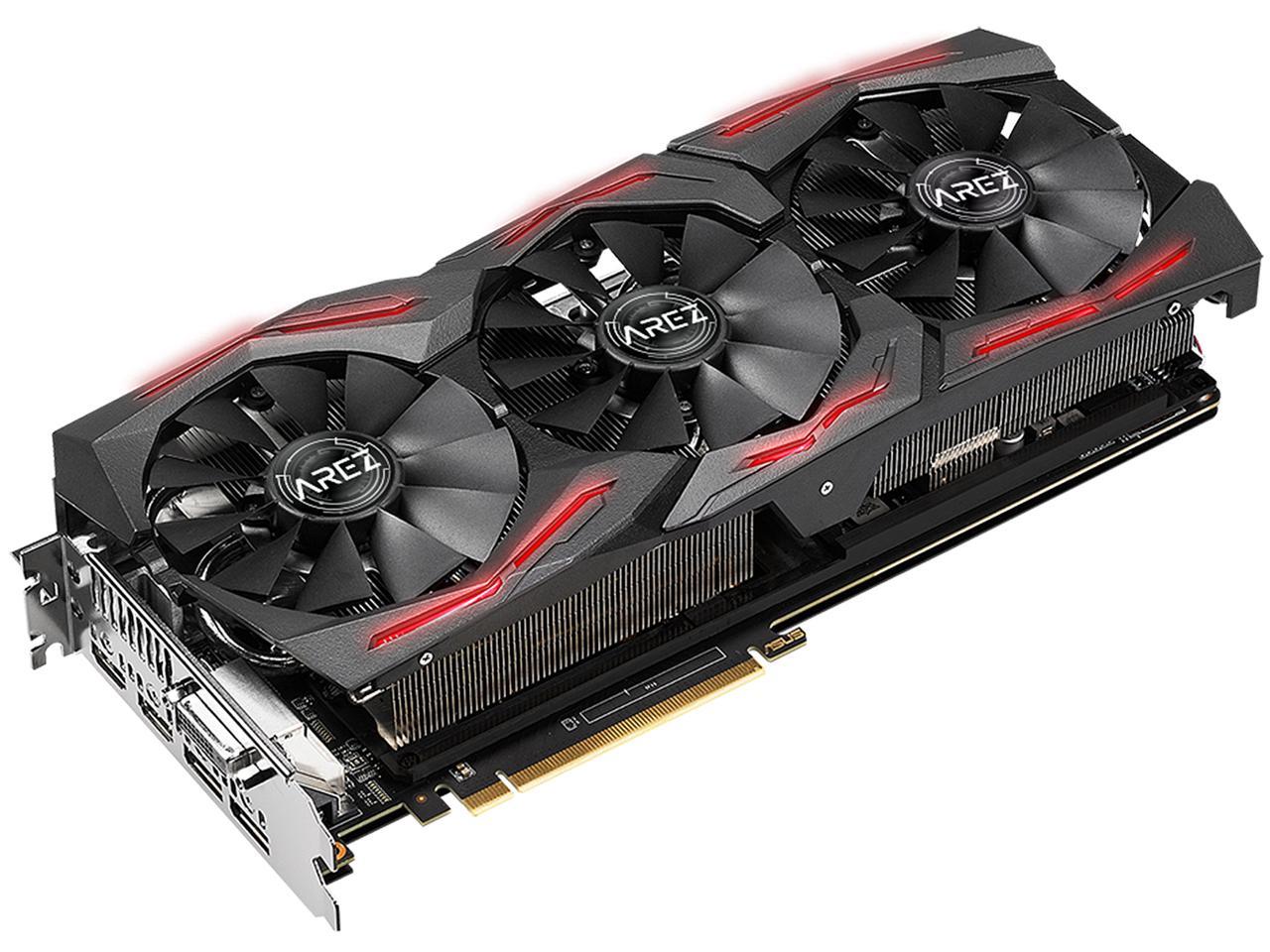 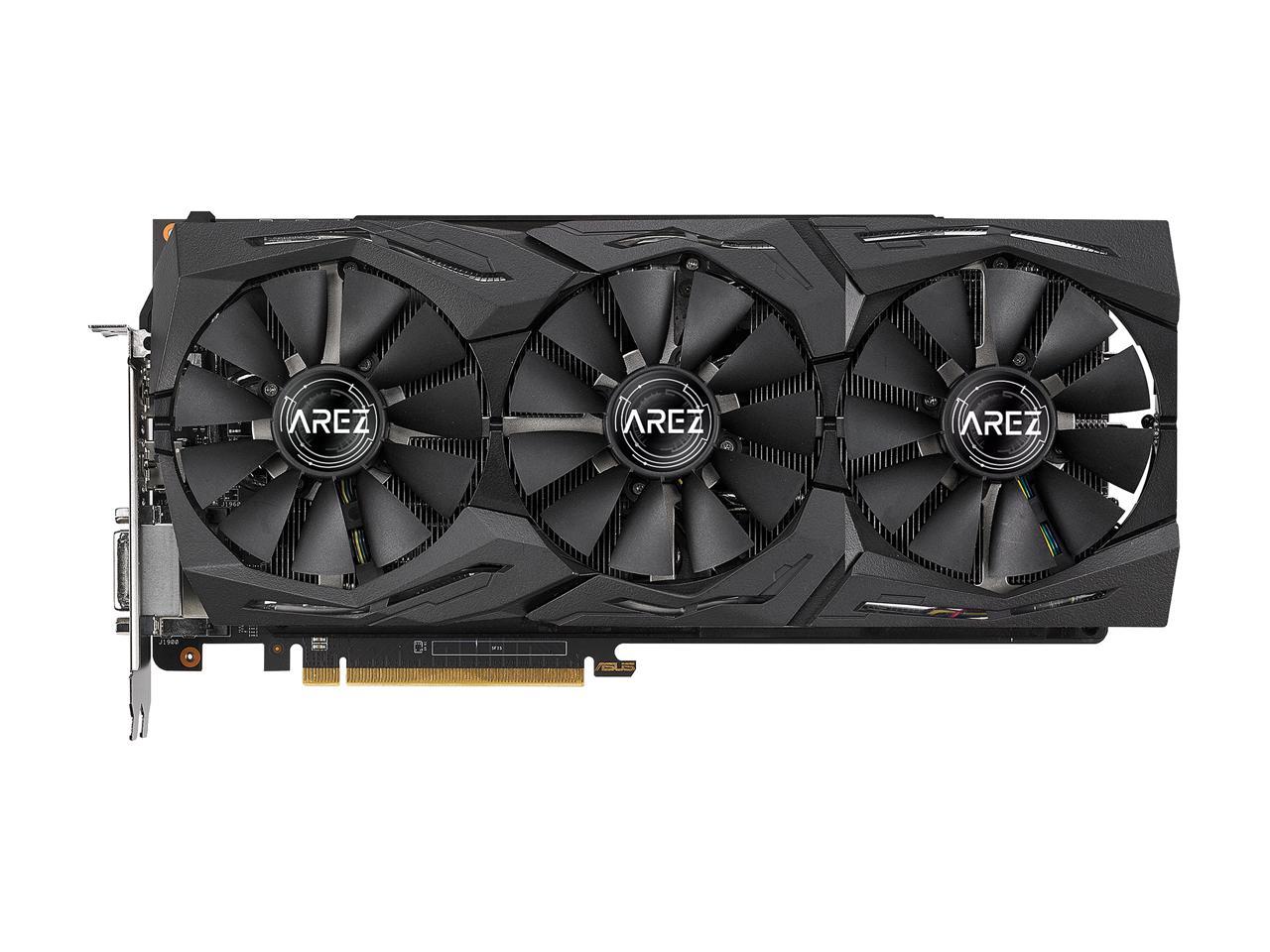 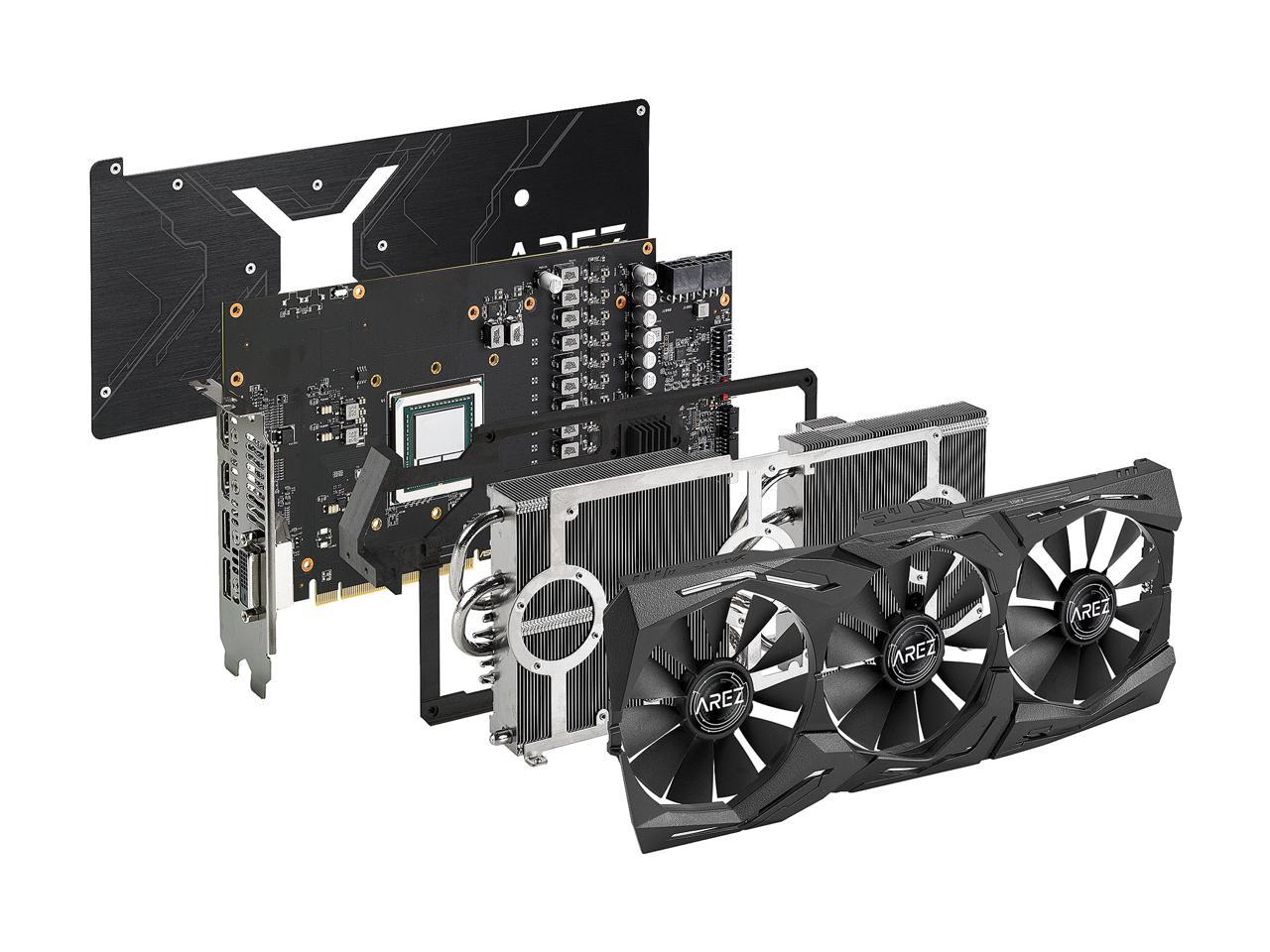 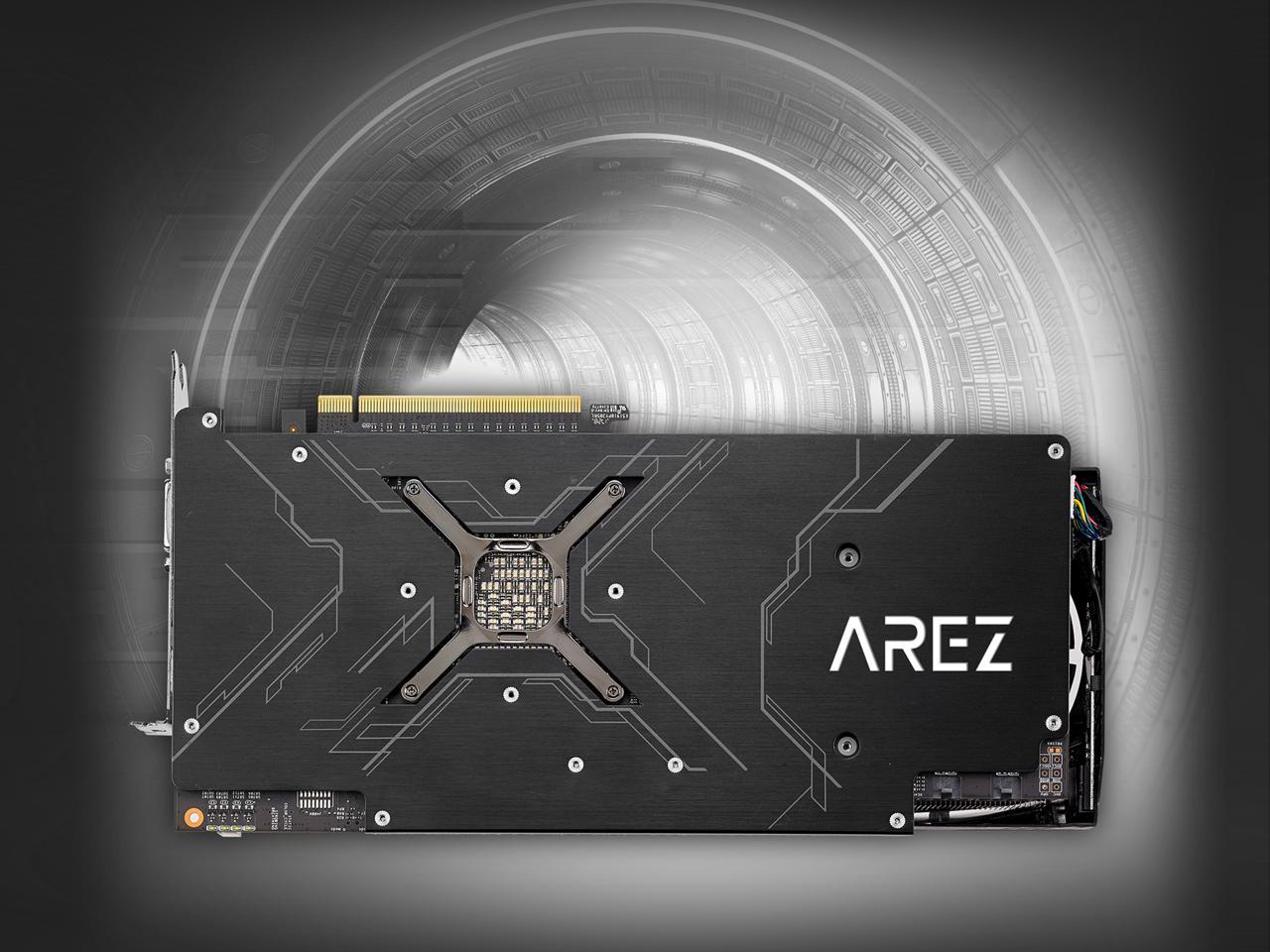 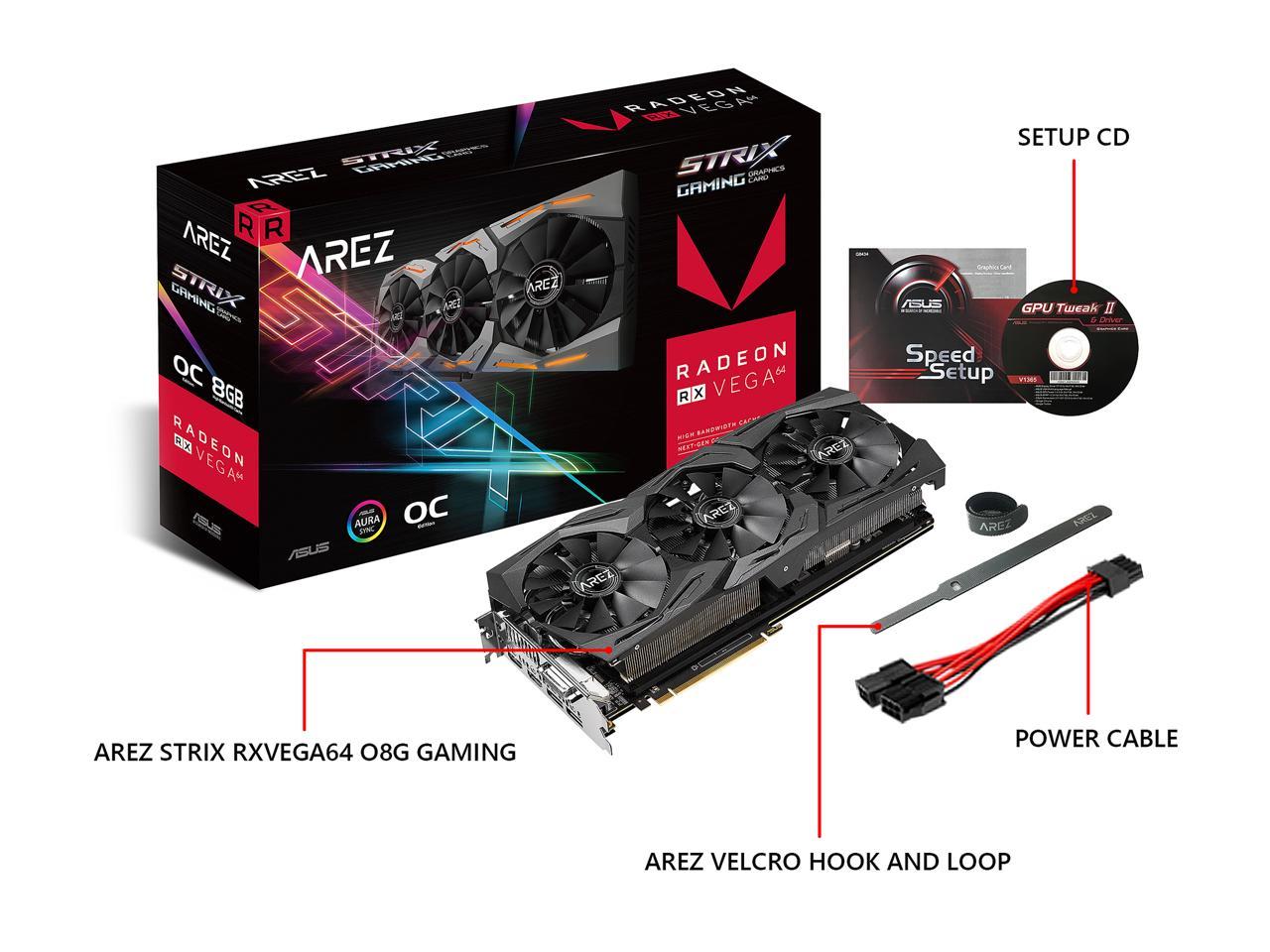 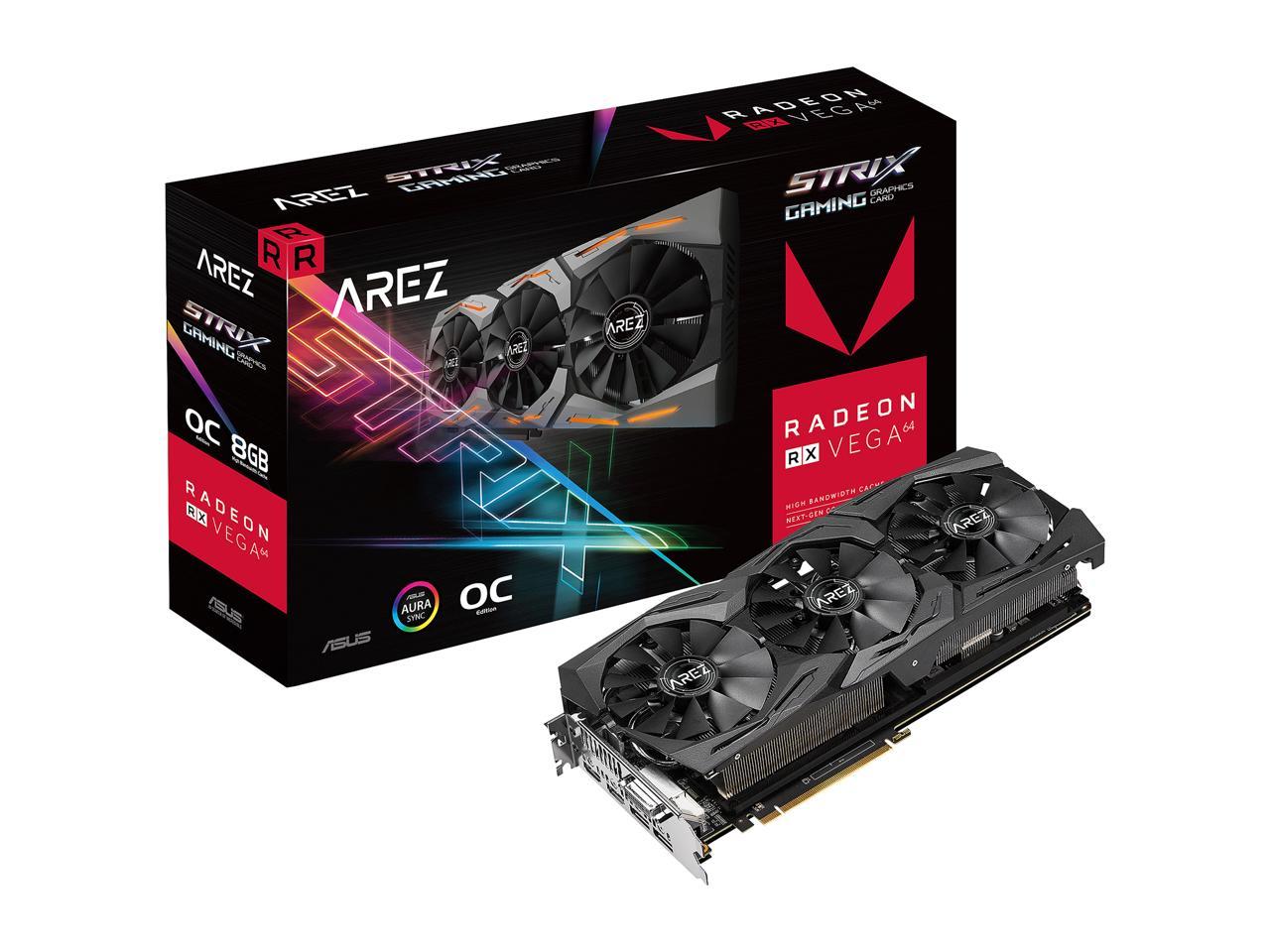 Learn more about the ASUS AREZ-STRIX-RXVEGA64-O8G-GAMING

Cons: - The price can be a little high, but I think it's worth it.

Overall Review: - Vega really shines when you raise the power limit and keep the card cool. I raised the max RPM of the fans to 2200 from 1600, it might be a little loud for some.

Pros: Pros: - Almost twice as capable as my prior R9 390 - Sale price, $435 out the door + 3 free AAA games, one of which I was definitely going to buy anyway at release - I'm not going to lie, with Vega VII right around the corner with a $699 price tag, seems stupid but + the platform upgrade, I feel a made a decent mid-term choice here before the rest is up to par. (AMD FX 8750 currently) - HBM2 Memory - No real experience with an nVidia 1080 to compare to but dang, this thing is a beast. RE2 Remake has the best graphics I've ever seen in person. All my slightly older games that would get choppy, nope. Smooth as butter. - Stays cool as hell (lowest idle clock I've ever seen but cons may prove a detriment) - Pretty good and functional RGB customization / modes. and a side pro, not investing in nGreedia with a purchase but I digress. It isn't perfect.

Cons: - I bought this right before Radeon 7 is about to release ($400 for a ASUS ARES (ROG) 8gb HBM2 card + 3 games) though am still up in the air about if I should kick myself or not. This review is pre-embargo for tech media so time will tell. - It's not able to support the same 3 displays i've had before (2x 3840 x 2160 + 1x 1920 x 1080) without crashing. To be fair, this might be a power draw issue as the Vega uses two 8pin PCI-E power connectors and hasn't been known to have the greatest TDP - A slightly noticeable decrease in FPS on LCD TV's despite being the same resolution with picture rendering set gaming, no adaptive sync.

Pros: Able to run a lot of the game I throw at it, at Ultra 1080p. Keep's cool even under very heavy gaming Looks Beautiful with RGB and backplate

Cons: I've been getting some coil whine from the card recently. Not a big deal, but it can get annoying sometimes.

Overall Review: Heavily optimized Nvidia titles such as FF XV tend to run badly on this card for some reason. There is some major lag during in game. Not sure what would be the exact reason for this.

Pros: Got it on sale for $589, which is still a little overpriced for an aftermarket card, but is built really well at least. This thing is much better than the blower style cards initially released. I’ve only seen mine hit 67c while gaming using stock fan profiles which are set for silence. I’ve only had a chance to play pubg and doom atm. I have a 1440p 144hz freesync monitor. Paired w/ this video card is amazing. Freesync in pubg appears to be fixed, I’ve had no issues w/ it hit that game is a perpetual work in progress. Upgraded from a gtx 970 and it is totally worth it. I plan to play with under volting / overclocking it but seriously don’t see a need to atm. I owed a geforce gtx 480 and it would go 90c + if you didn’t have the fan ramped up to super loud levels. I see vega compared to the gtx 480 a lot on forums. Not true by any means with this card. The blower style Vegas maybe. I have no regrets from me. Freesync is a major factor for though and it is worth it.

Cons: Video card prices in general suck and a good card is now 50% of a system build budget. Then came along the miners.

Pros: its quite, it's very cool, Freesync is gorgeous, its powerful, it's just perfect... btw I really like the adrenaline software it's way better than geforce

Pros: Card is extremely quiet, even under load it's barely audible above case fans. Graphics are extremely awesome, very vibrant. I think that the graphics are actually better than my EVGA 1080TI, though the card isn't as fast.

Cons: I haven't had the card but a month, however so far there are no cons. Note that the card is LONG, and it requires adequate space to mount it. It's also probably the heaviest Video Card I've ever purchased.

Overall Review: Benchmarks are inline with the 1080 video card, the 1080TI is somewhat faster, but again, I believe that AMD's graphics are superior

Pros: Great card and after undervolting can keep up with the 1080/1080ti. I haven't had the blower version of this card but I hear those are incredibly loud and can run a little more on the hot side. Has some cool RGB on top and side of the cad showing off the "AREZ" brand. Free-Sync makes up for whatever power it lacks and looks beautiful on a 240hz Free-Sync monitor. Definitely lacks power compared to my previous RTX 2080, but like I said free-syncs graphics and performance boost somewhat make up that margin of difference. Runs about 35-45 degrees Celsius idle in my Cooler Master RGB LIte 5 Case.

Cons: Okay, so i just got done praising the card but there are many flaws in my opinion. For one, the card is pretty humongous; the biggest and heaviest card I have ever had for sure. Having to mess with the voltage wasn't too fun either, but just something you have to do with these cards. Wish they would do that from stock settings, but it lies on the consumer to get it done if you want better performance/lower temps. Even after undervolting I still have higher temps than I ever did using NVIDIA cards ranging from 65-75 Degrees Celsius. If you aren't too tech savvy, might just want to go with NVIDIA cards where you can just plug in and play, but these AMD cards are not that way. Even playing a game as low demanding as CSGO I will hit 70-75 Degrees Celsius and it does get pretty loud and hot around my computer area. I could have been wrong about how I went undervolting and that is the reason it is so loud and running a little hot, but then again I shouldn't have to do that in the first place. All in all, a great card and worth the $450 I spent on it at the time.

Overall Review: I would purchase this card again and I would recommend it to my friends who already do overclocking/undervolting as that is what is necessary to make this card reach its full potential. I hope this review is helpful as I wrote it as something I would have liked to read before going out on a limb and buying this.