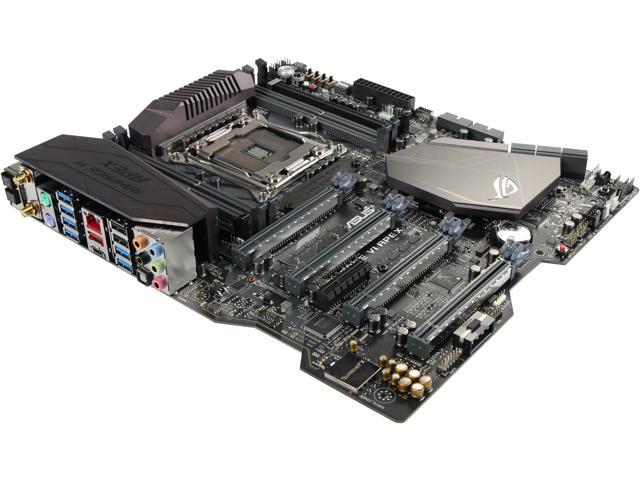 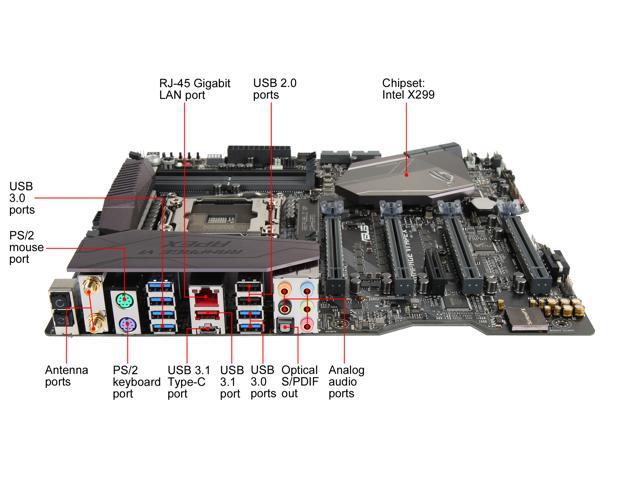 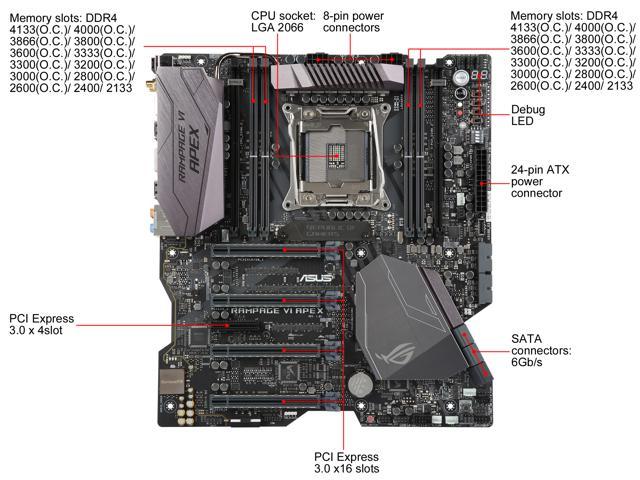 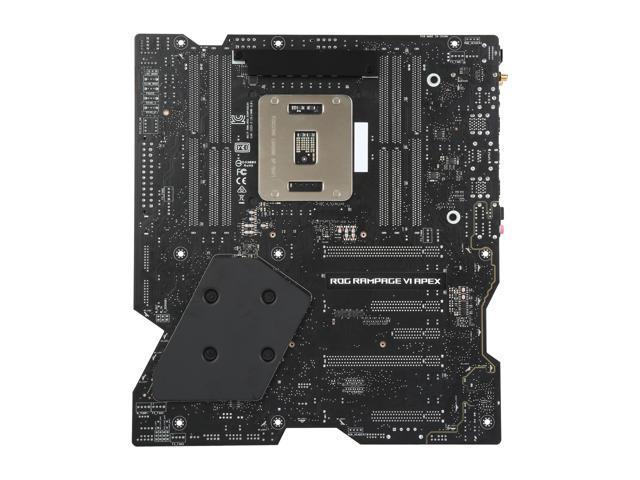 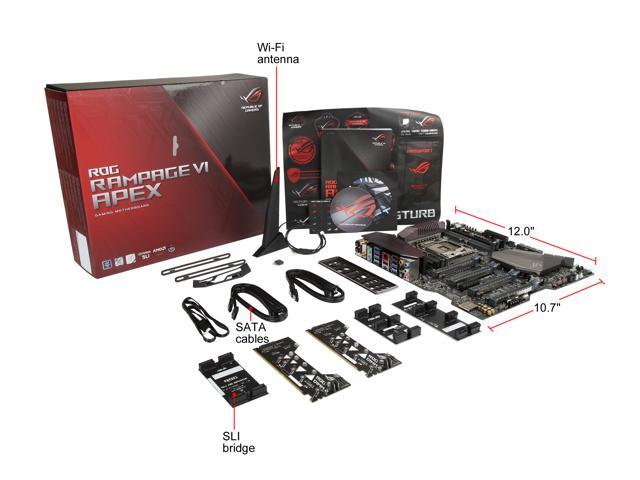 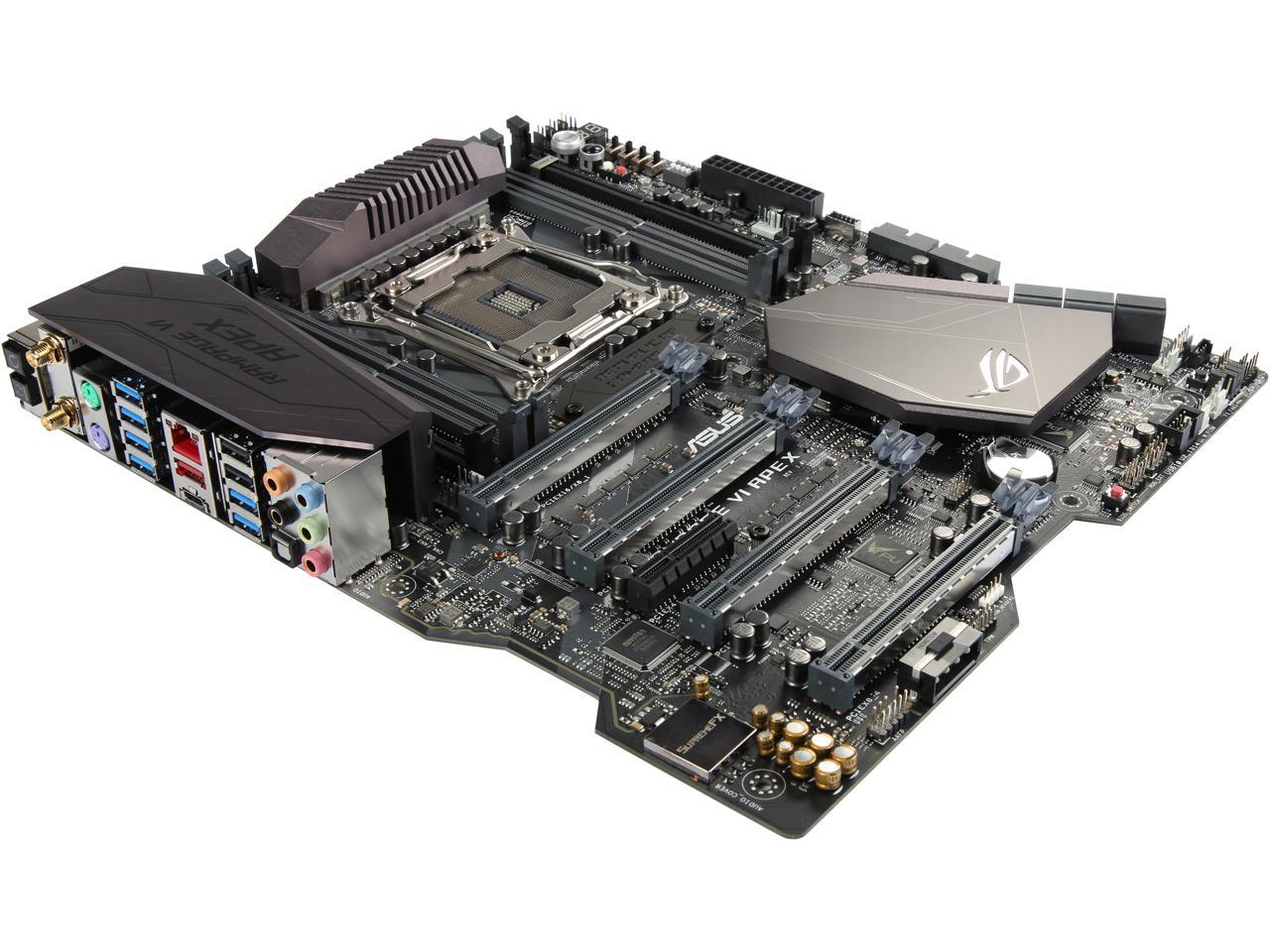 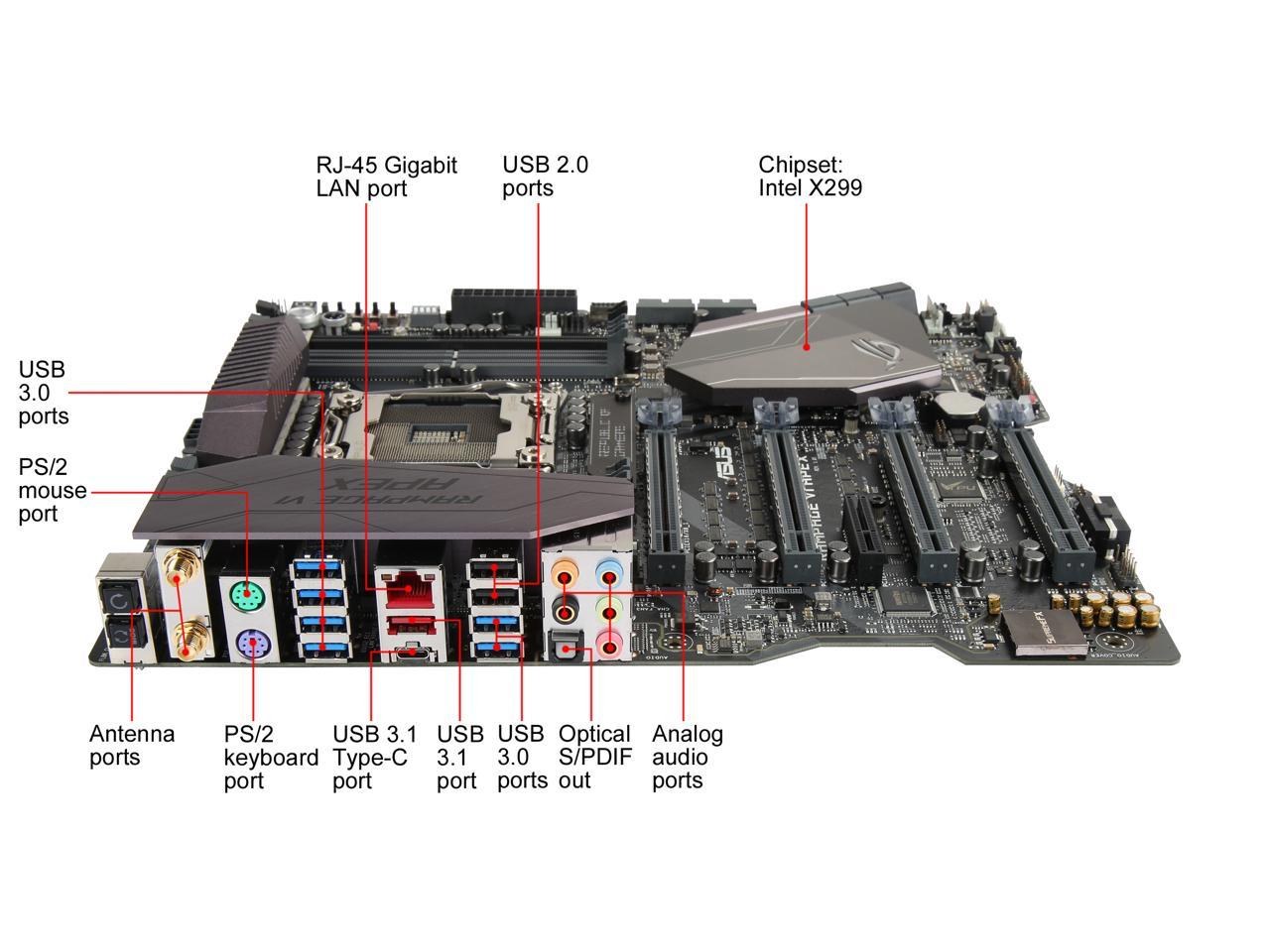 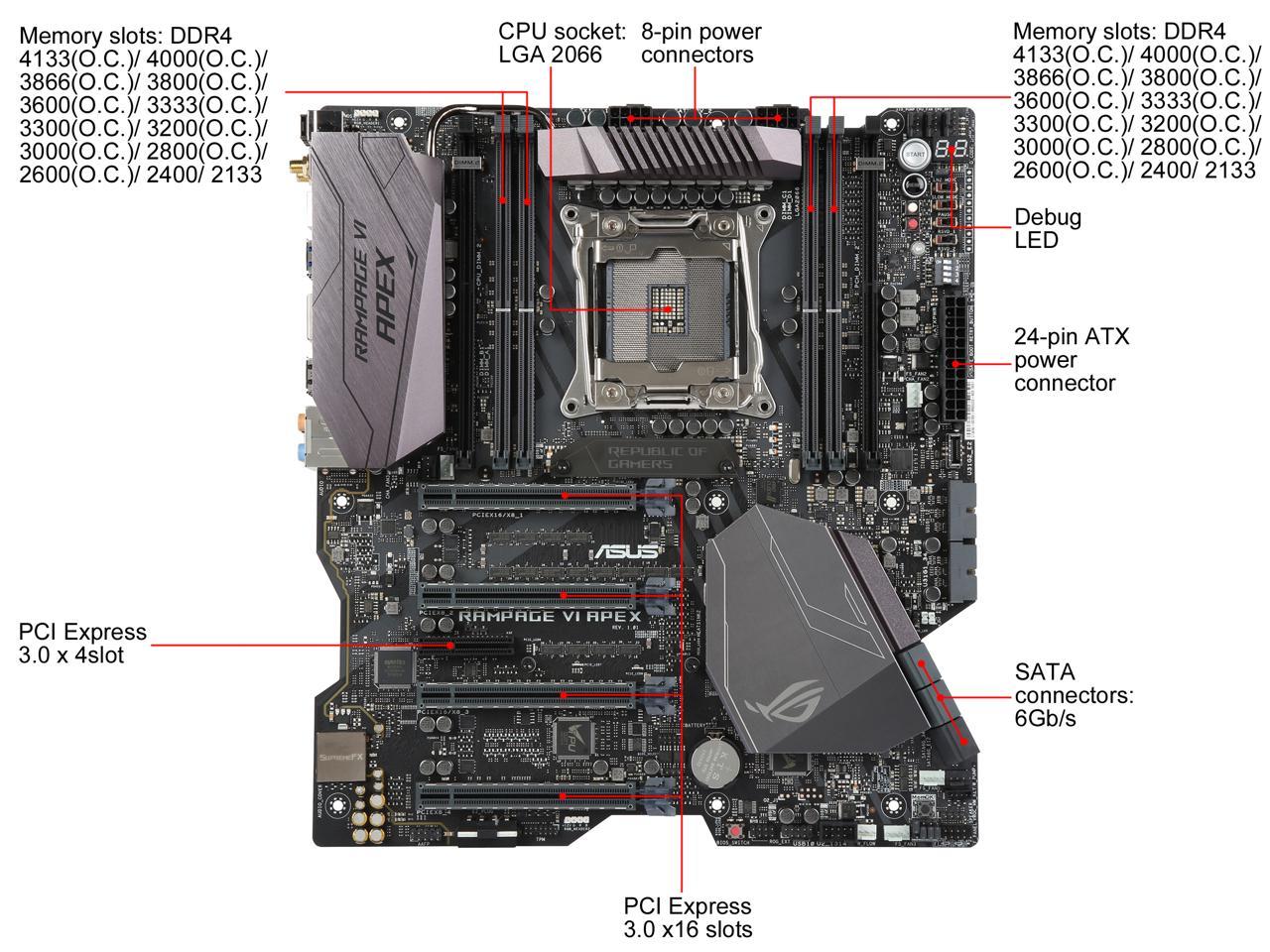 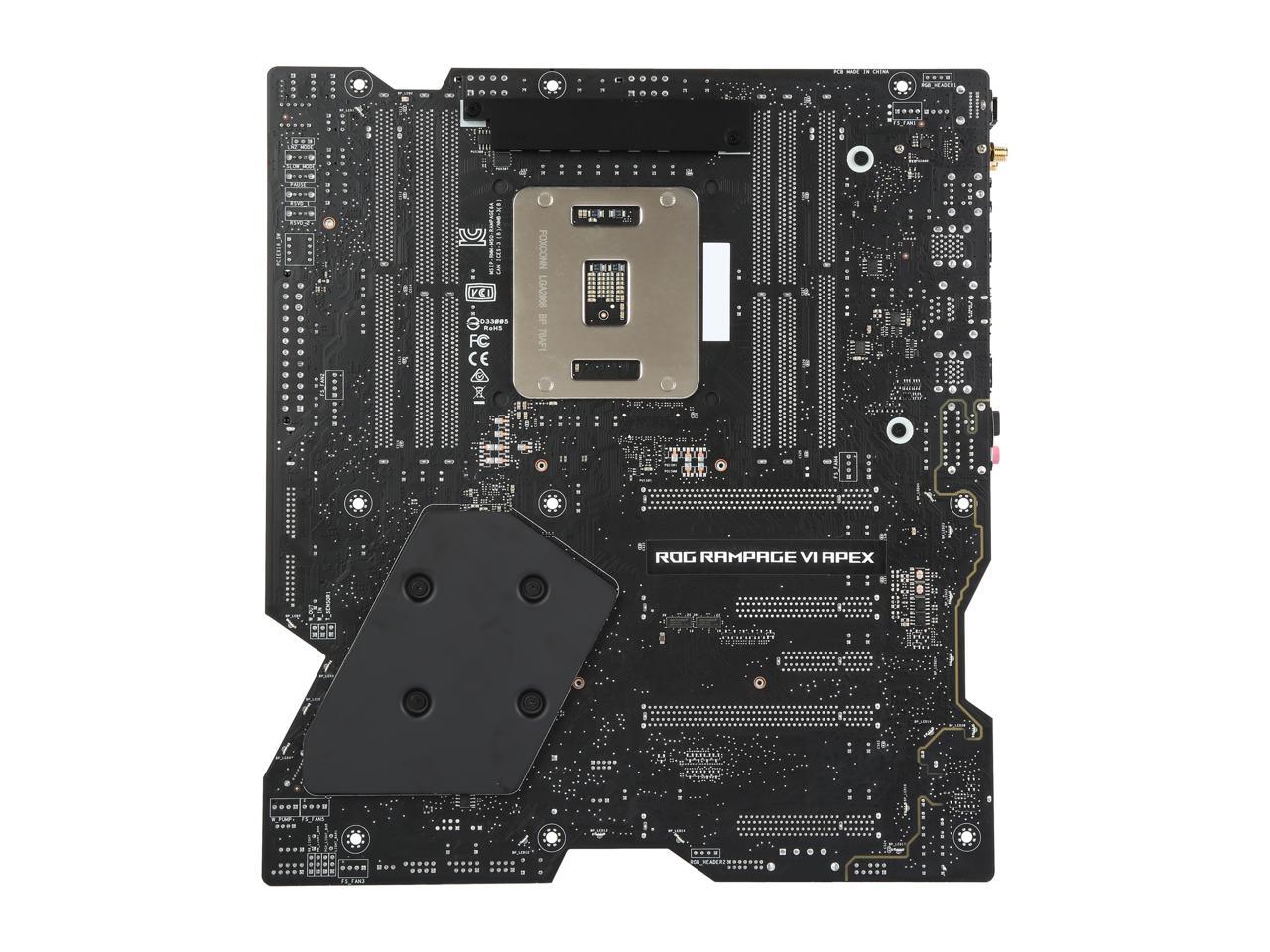 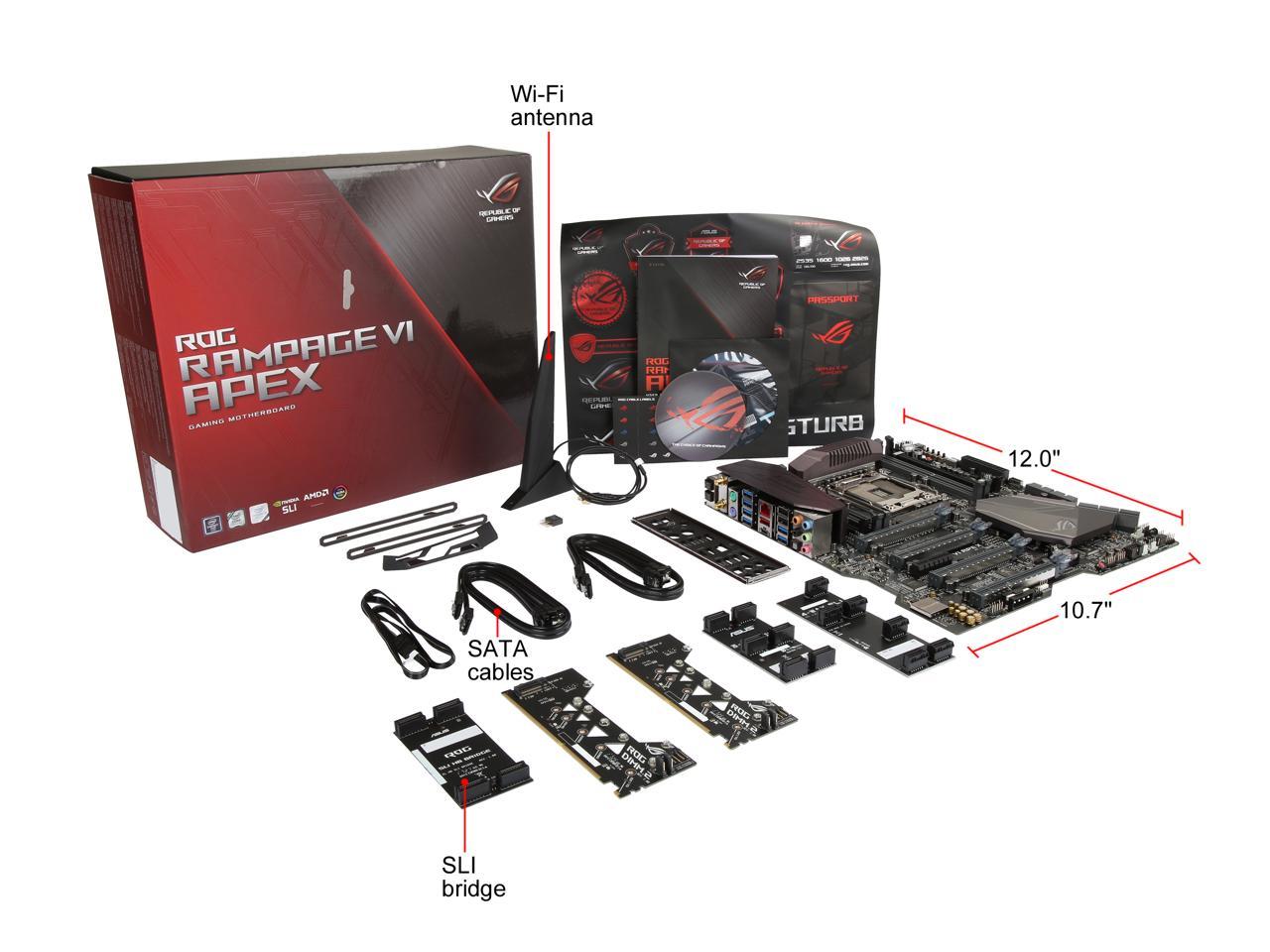 Pros: - Works great with my 7980XE at 4.4GHz - Works well with the 3866Mhz G. Skill Trident RGB (2x16GB) - Tons of fan headers - Intel Optane Memory support - Works well with my HGST He10 - VRM temps Don't go over 55C (During WPrime 36 thread 1024M), and I am not even using the fan bracket - Works Great with my EVGA FTW3 1080 Tis in SLI - Everything runs wonderfully and stably in Windows 10 Pro. - Works well with my Enthoo Elite RGBs - Not a single firmware stability issue. Great job ASUS!

Cons: - Wish I could set the Minimum duty cycle in the Q-Fan settings lower. (Won't allow lower then 20% and even that is forced as the BIOS will complain of a CPU fan issue every startup cause its set to 20%)

Overall Review: - Yes i would recommend this product to other people - Used to dislike ASUS for firmware stability issues. Decided to give them and their R6A another try cause of how well it preformed with VRM temps. The fan bracket is really what won me over, the irony is, i never actually used the fan bracket. Very happy that they have ironed out there issues with firmware. Would definitely continue buying from the Rampage line. :) - Hoping ASUS will release a BIOS update that will remove the Q-Fan soft limit

Cons: USB ports are flaky. they all seem to work well with keyboards and mice, but not so good with my capture cards. infact only one port will work with them. The type A port next to the usb c port is the only port that has proper signal. Allowing my capture cards to work proper! The other ports seem to work OK for the most part but i have had some USB flash drives get corrupted when using other ports! I have tested with no overclock and the board seems to be have the same.

Overall Review: I have had issues with other recent intel boards as well with usb ports. how ever so far the 2 amd systems i have seem to work great on all usb ports. I do not know how many others are having issues but i know of at least 2 others that have capture card issues on there intel based systems. \o/ My old x79 intel system works great as well all usb ports work with capture cards. sooo for what its worth there you go i shared my experience.

2 out of 2 people found this review helpful. Did you?
Manufacturer Response:
Dear Chris, Thank you for taking your time in writing this review, we value your feedback. It is unfortunate that you are having issues with your USB ports. Is your BIOS up to date? Also, have you tried updating your USB drivers? Let me know if this helps. Sorry for the inconvenience. If you have any questions or concerns, you can contact me at cl-justin@asus.com, or to speak to an ASUS live support agent 24/7 at http://bit.ly/AsusLiveChat. I'm here to assist our customers with our products and dedicated in bringing a resolution to all issues that they may come across. Your case for reference is N180374981 Thanks for choosing ASUS Regards, Justin ASUS Customer Loyalty
Michael G.
Ownership: 1 week to 1 month
Verified Owner
Best performance X299 motherboard.9/2/2017 12:15:52 PM

Pros: Best overclocking you will find on any X299 motherboard period. I got my 7900X to 4.8ghz easily and even got my 64gb Trident Z kit from 3200mhz to 3800mhz with no effort. This board is like the track version of the Extreme with all the prosumer features stripped off in favor of more overclocking tailored ones. I highly recommend this motherboard if you are serious about overclocking your system for 24/7 use. Aura instantly syncs all of your RGB devices.

Cons: 4 memory slots instead of 8 make some memory kits not compatible however this helps with shortening the traces allowing for better timings and higher clockspeeds. Limited amount of controllable fan headers. You will need a fan hub if you have a waterloop with lots of radiators.

Pros: I'm a happy camper. Having read all the negative reviews, in particular quality issues, I'm happy to report that the Apex is up and running without any issues. Combined with an Intel 7900, G.skill F4-3200C14Q-32GTZSW, Corsair 850H, there were nervous moments when powering up. All new, what could go wrong? Just waiting on Caselabs BH8 and a water cooling solution . .

Overall Review: Recommended IF my purchase is representative of current production quality.

6 out of 9 people found this review helpful. Did you?
Anonymous
Ownership: 1 week to 1 month
Verified Owner
A great board hampered by Asus odd handling of flagships11/28/2017 9:18:25 AM

Pros: - 8+8 power connector - plenty of NVME space on 2 DIMM risers - on board and BIOS options for overclocking/LN2/water are helpful

Cons: - limitation of 64GB is a colossal error, because memory clocks aren't hampered by trace length on x299. Ends up being the only advantage of the Rampage Extreme, which has the colossal error of 8+4 power. The fact that at least three other board makers were able to do 8+8 AND 128 gb on the same board, while Asus split the features across two flagships, is absolutely mystifying. - fully stocked with DIMMs and NVME's, the airflow around the CPU is cut drastically. Ive noticed that R6A and R6E boards run hotter than every other board, and it may be due to the "ROG" bling underneath the CPU creating a temperature well. Not sure.

Overall Review: - good board if you like to OC or have a lot of NVME storage, or require high power for a 7980XE. But the Rampage Extreme can also handle all those cases, and also has 128 gb. A great board hampered by a terribly conceived memory limitation.

Pros: The build quality of this board feels like stone. It's solid. This might be one of the heaviest eATX boards I've encountered. Obviously it's PCB has more copper. and the aluminum heatsinks add to the weight. One buyer beware I see here is you will need a higher end power supply with two EPS/CPU 8-pin connectors. This is a non-issue for someone who knows the ropes or has high end equipment, but this is something for a new builder to consider. The final deciding factor that made me pick this board was having 2x 8-pin connectors and the ability to install a monoblock on to the motherboard. I already have a real W/C setup with a GTX 360 Black Ice radiator and a Supremacy EVO waterblock. In the future I would like to upgrade to the 10 core- 14 core Cascade lake processors and I want something that will power a chip like that with no issues. This board is one that should be able to stand up to excessive overclocking for a long period of time. I have the Asus Rampage IV Extreme that housed a 3930k, 4930k, and a few E5-1600 v1/v2 which was overclocked to the voltage limits for a couple years. (When I say voltage limits, I mean 1.375, 1.4, 1.5 vcore, while using a fan to cool the VRM.) That RIVE board is still ticking. I have had other boards from the Deluxe and WS lineup that couldn't stand more than a several months of prolonged overclocking. So far the Rampage and Maximus lineup has treated me very well. After overcloking both a 7820x and 7940x (both delidded w/ Custom loop and a monoblock with the 7940x) this board has some can't miss features that are addicting to use. My personal favorite is being able to set a clock speed limit and voltage limit to each individual core. Another thing I like about these high end ROG boards is I can set or disable power limits, which I can't do on my "Dark" board. The BIOS is very robust.

Cons: Asus quality control and their ability to repair defective products is terrible at this moment of time. They really need to quit treating customers like they're out to rip off Asus. Shipping costs are very high so it's not conducive for us to send anything to Indiana. We just want motherboards that work WELL and work RIGHT the first time. Actually, This was the 2nd RVIA I bought. The first one I bought at a big box store which always has limited stock. That board was failing out of the box. I ended up returning the RVIA the next day but I was unable to exchange the board due to it being the last one they had in stock. So I refunded the CPU and bought the same parts at newegg for $100 cheaper. As of late I've had nothing but problems with Asus products. I also bought a Crosshair VII Wifi board which I had to send back to Asus. On top of that I just got back a Maximus VIII Hero board from Asus that they didn't touch because they couldn't recreate the problem I was having, which was the board taking 30 seconds to POST and the USB 3.1 port not working correctly. It should have been very easy to recreate the problem I was/am having. Thankfully this 2nd RVIA board has been working well. I also bough a Prime z370-A and a Maximus X Apex board that's been working great.

Overall Review: Yes, so far I would give this the nod if you want to buy into the x299 platform. There aren't too many x299 boards that I see that I would buy. The build quality of this board is on a whole other level compared to others. If you are going to overclock then this one is a no-brainer. It's super fun to be able to FINALLY set the clock speeds to each individual core. My 7820x isn't a great chip but the reason for that is Core #6 doesn't overclock all that well. Cores #3 and 8 can manage to hit 4.8ghz stable at 1.28v but Core #6 won't do 4.7ghz at this voltage. The RVIA lets me set voltage limits so I can weed through the good and bad cores, instead of being hobbled by 1 bad core.

4 out of 12 people found this review helpful. Did you?