FREE SHIPPING
Sold by: Newegg
Shipped by Newegg
Newegg’s gift-wrap service is the ideal solution for making your gift special! Select your item as a gift, then add your message. Your gift will also be discreet with no prices being included on the packing slip.
Price Alert
Add To Wish ListFound on 86 wish lists 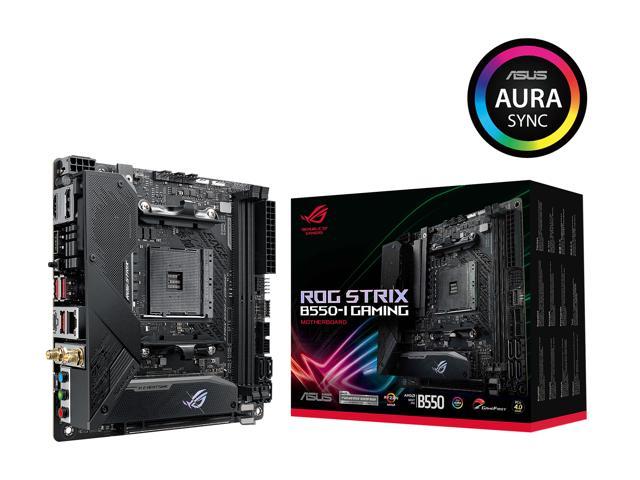 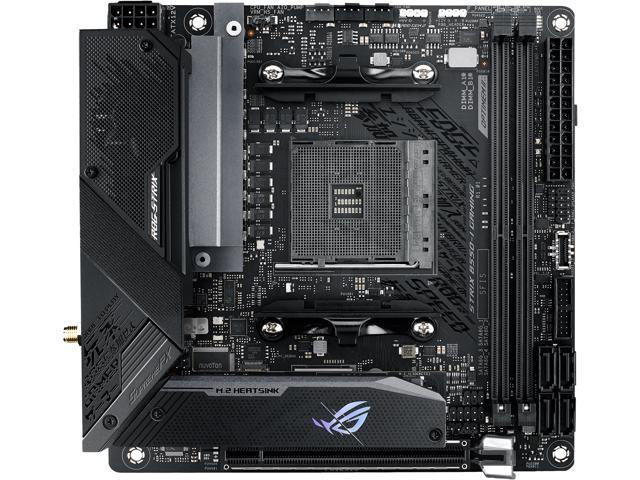 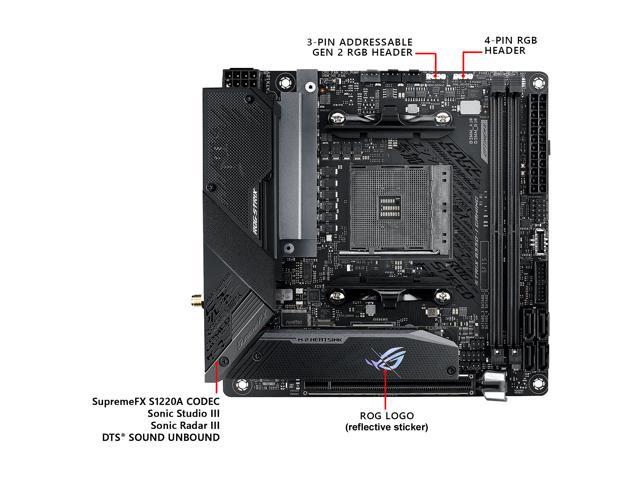 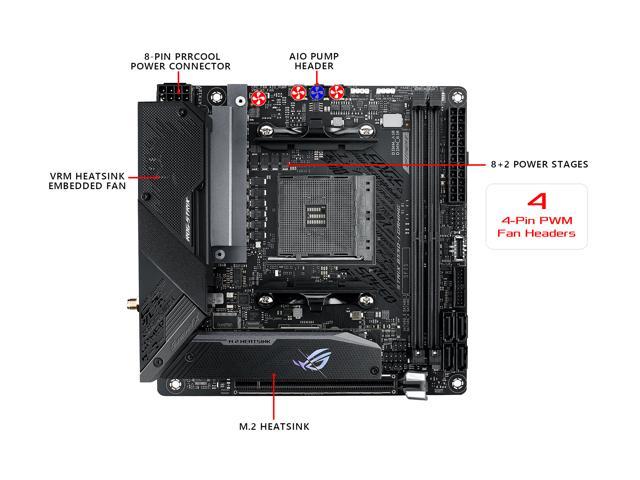 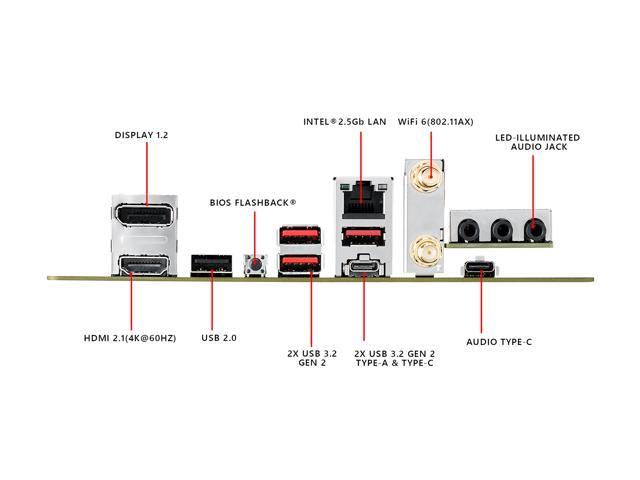 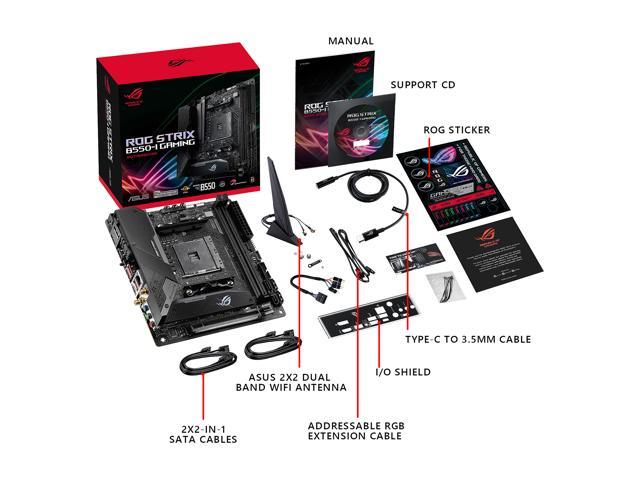 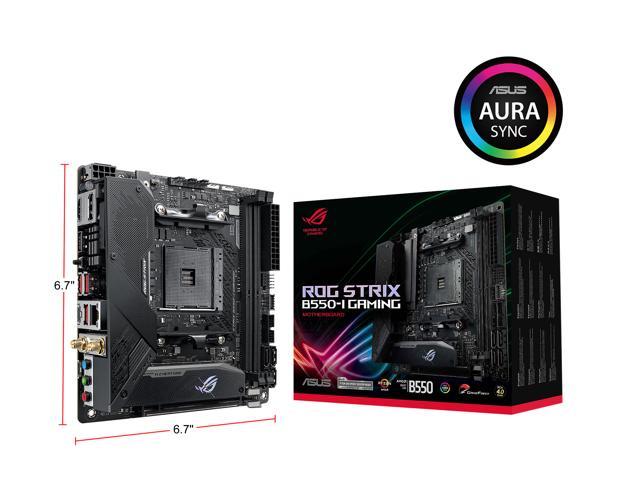 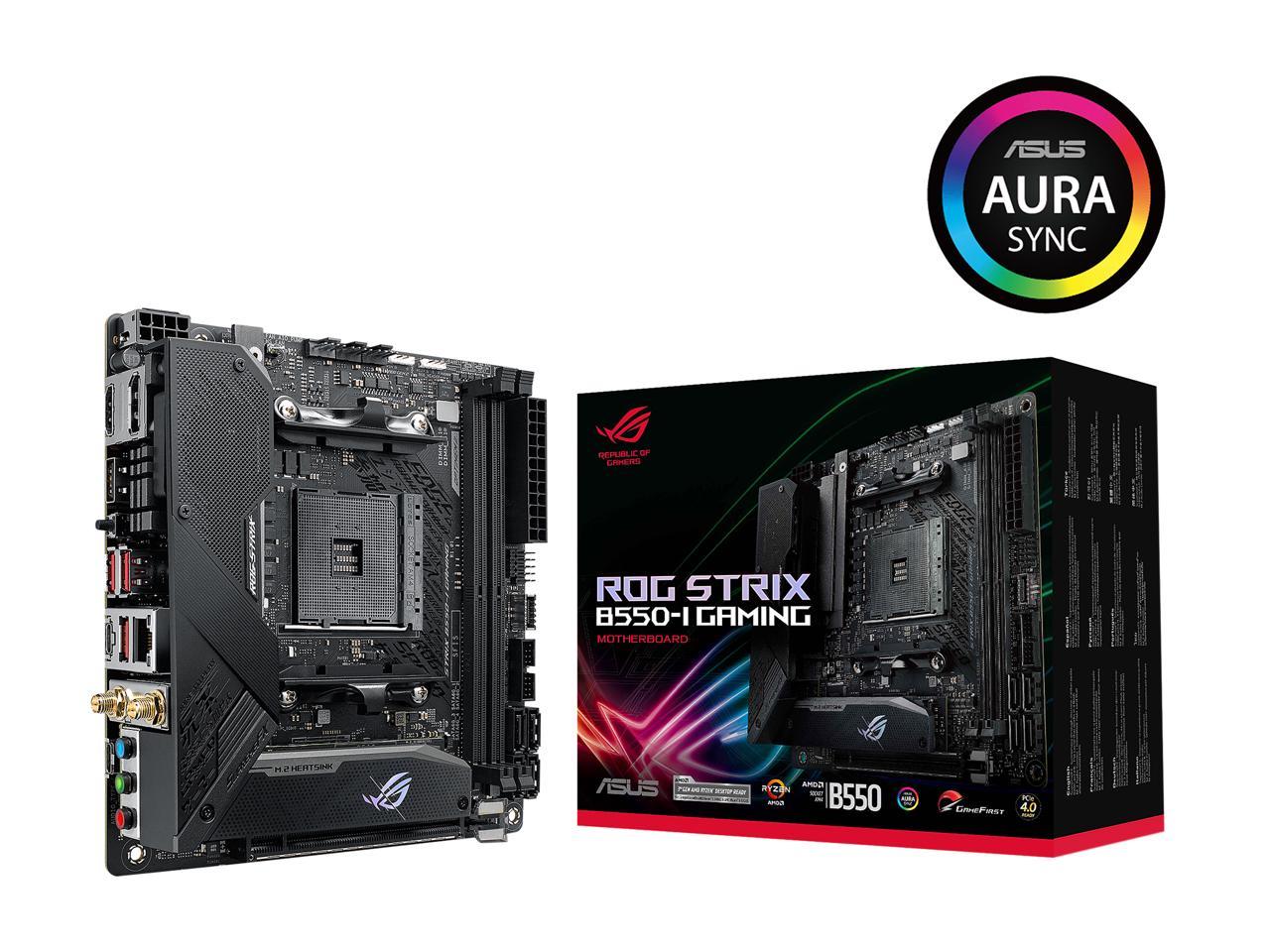 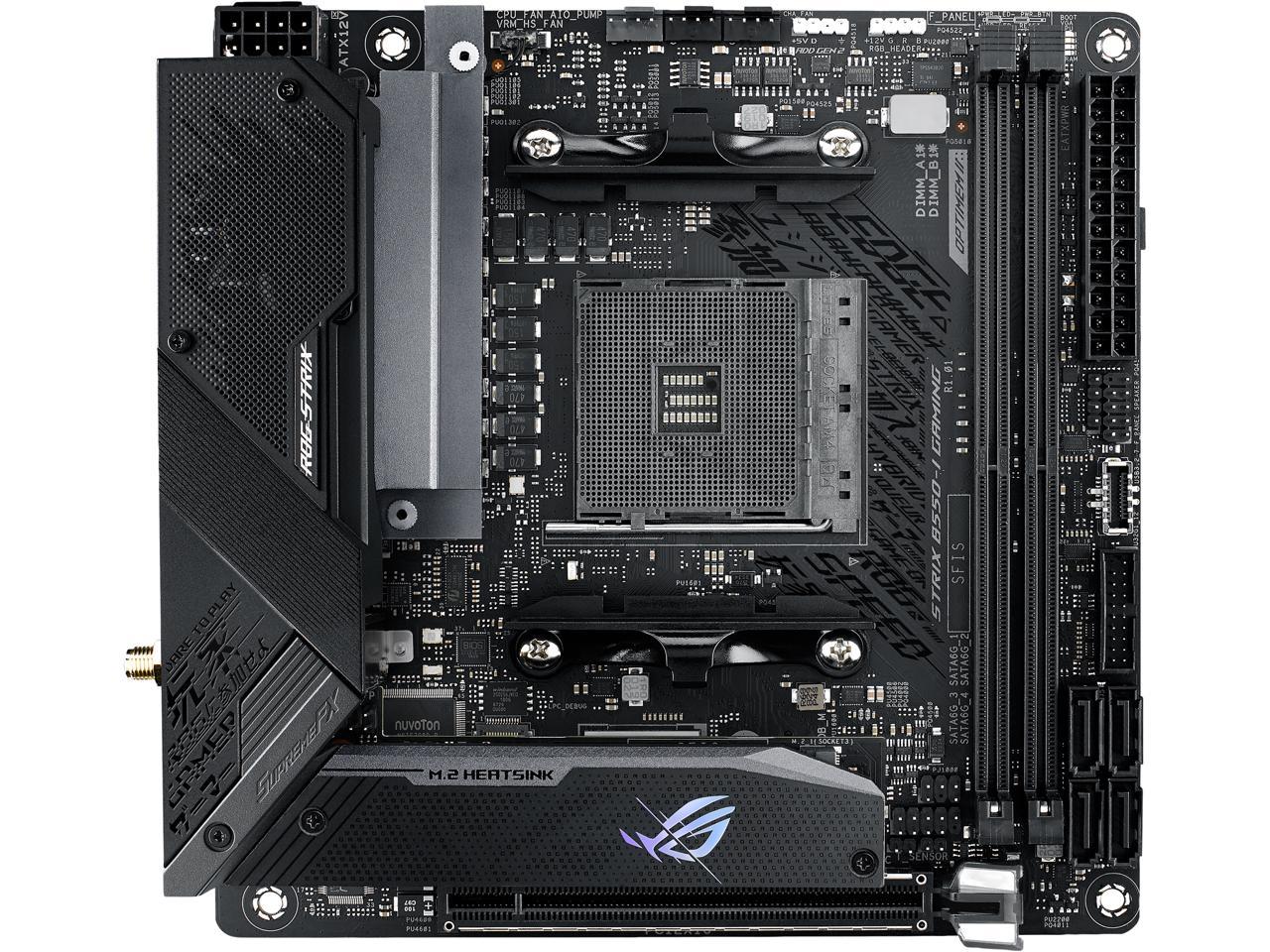 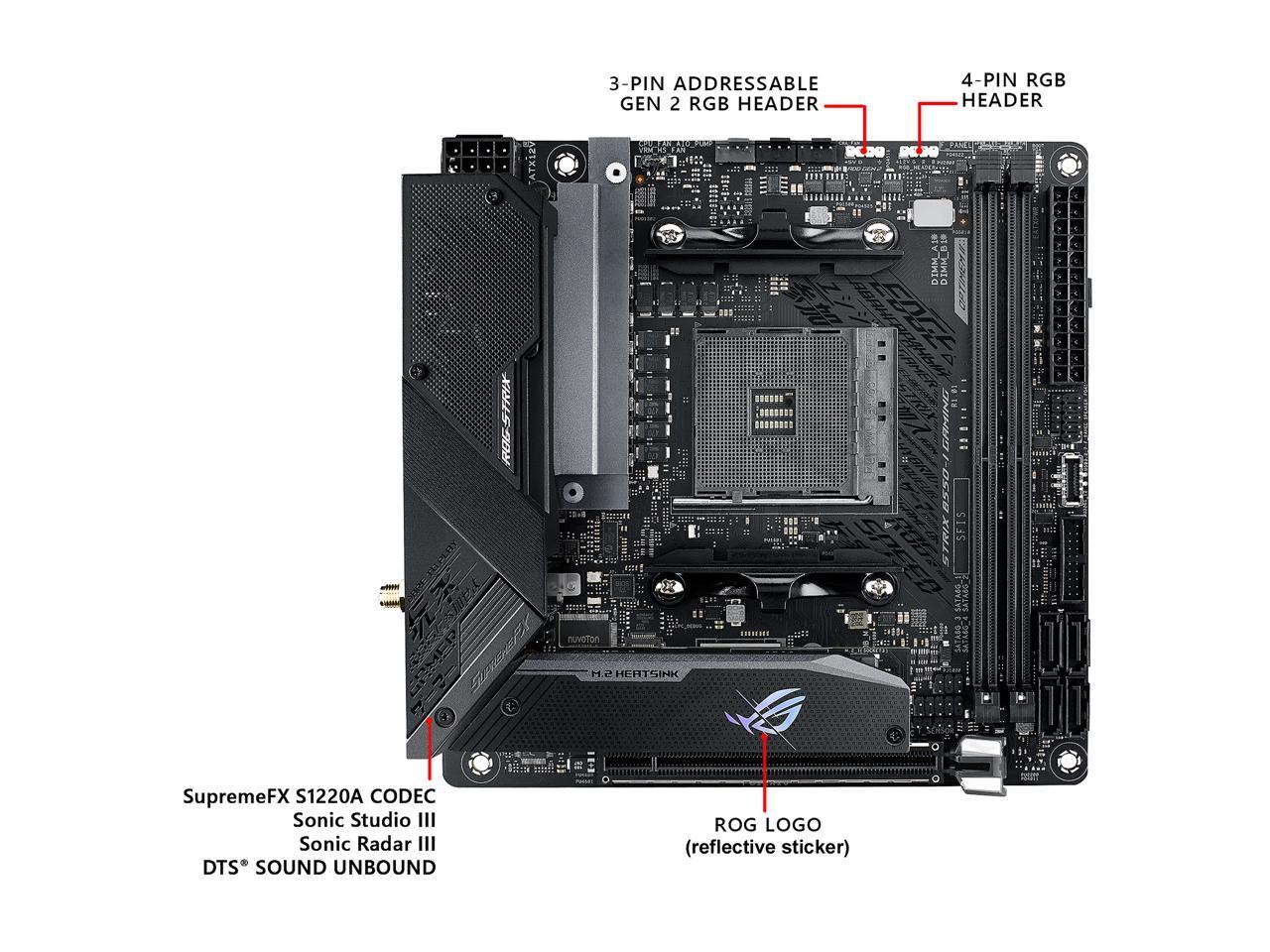 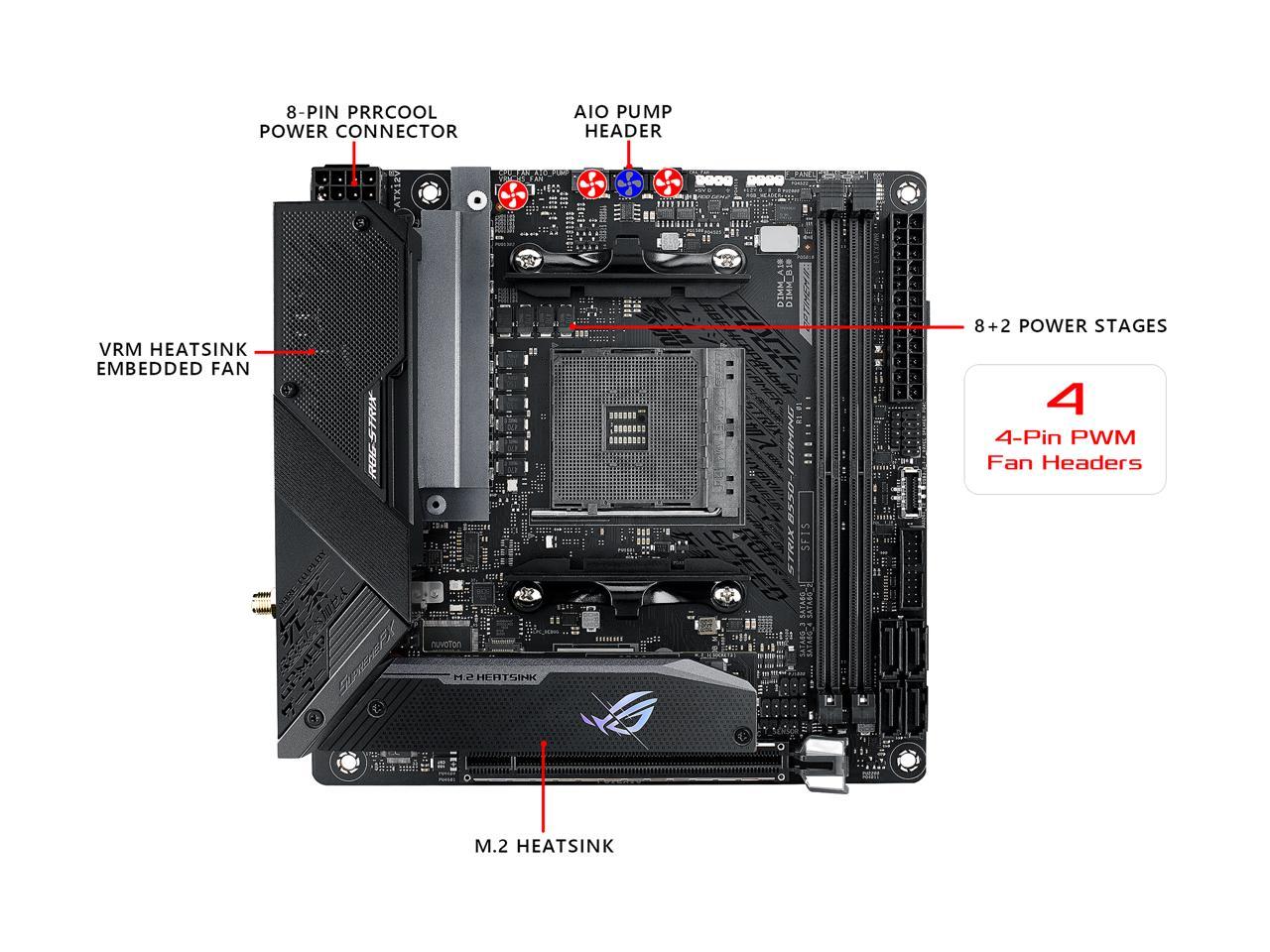 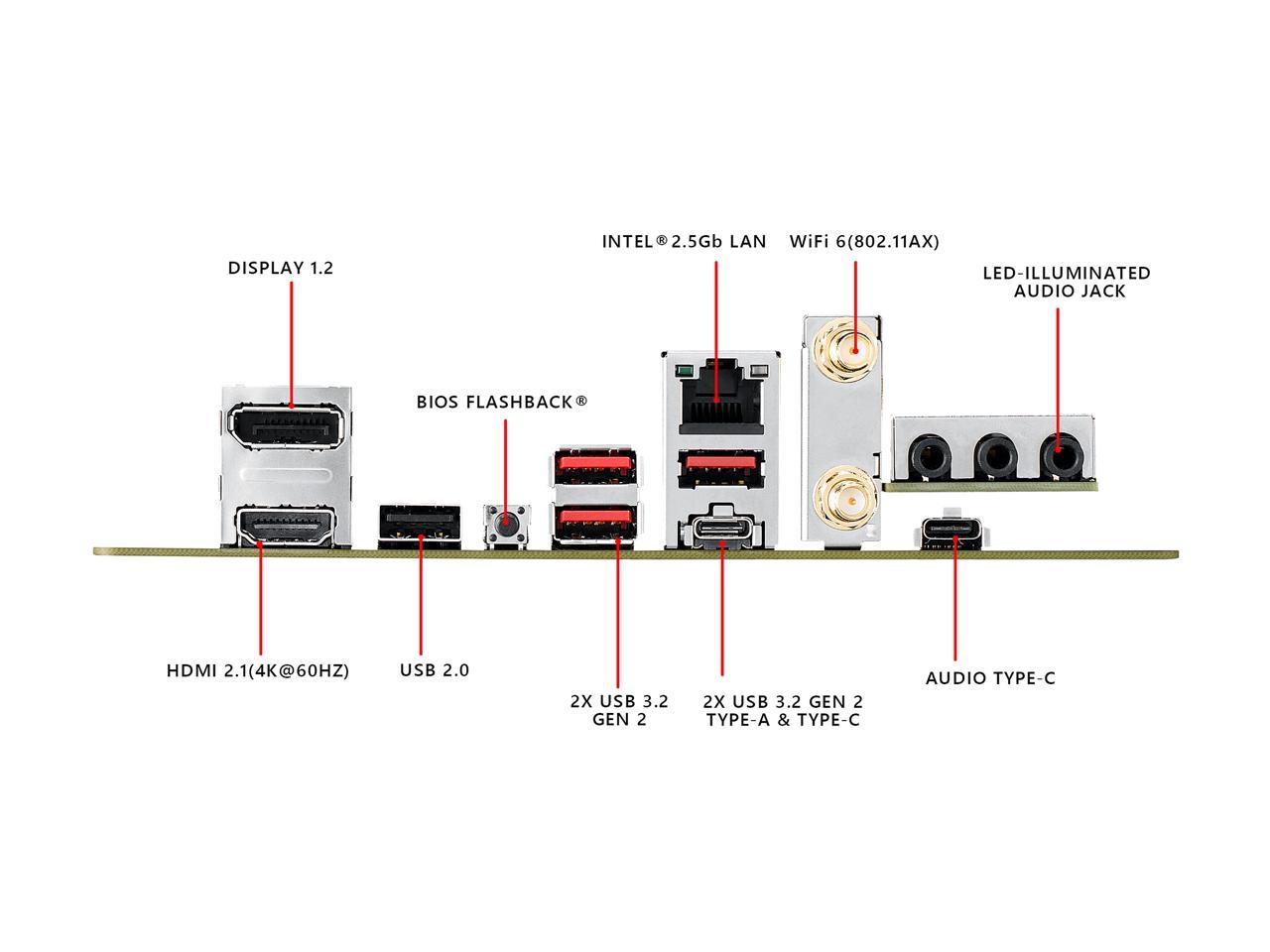 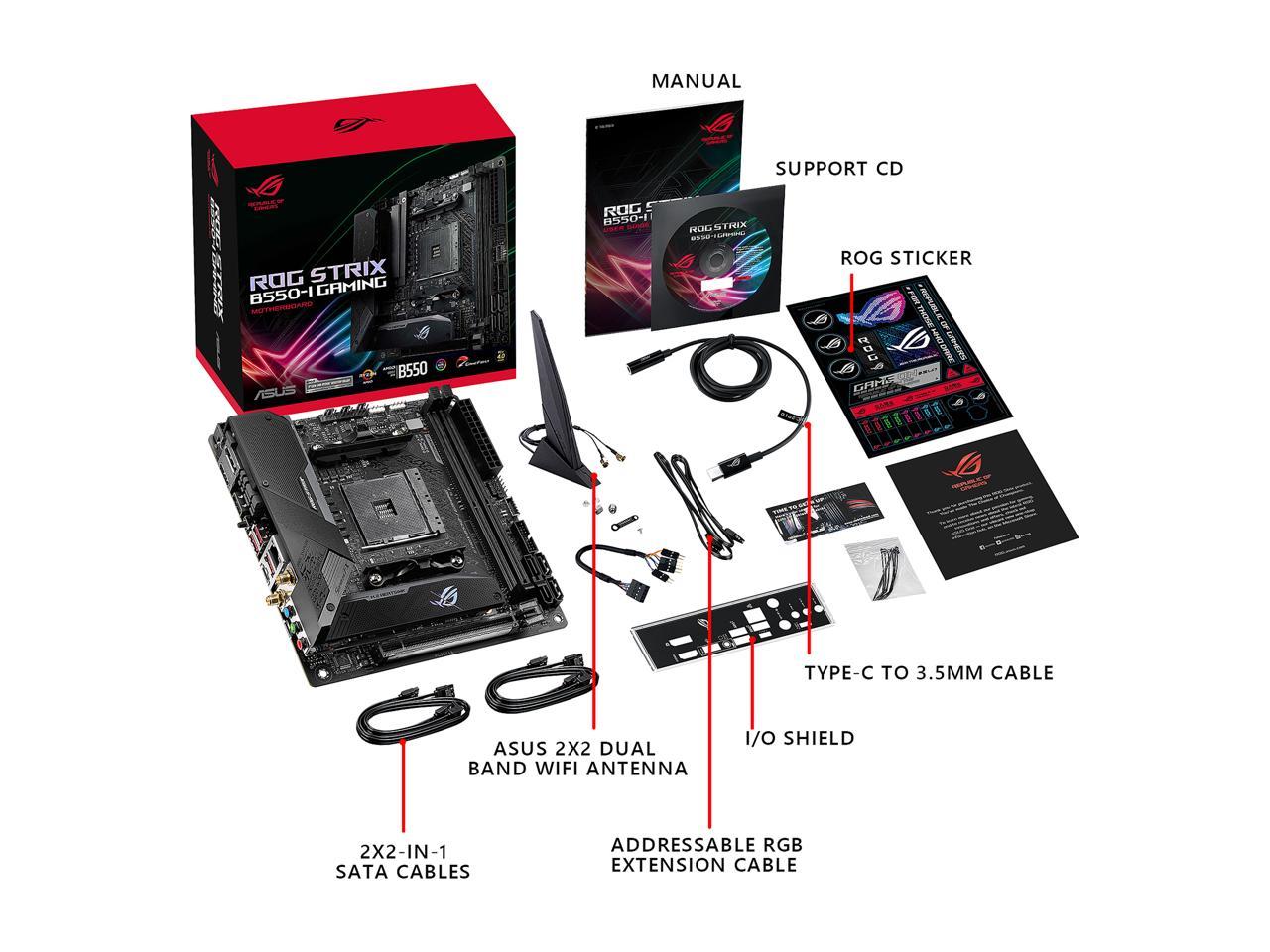 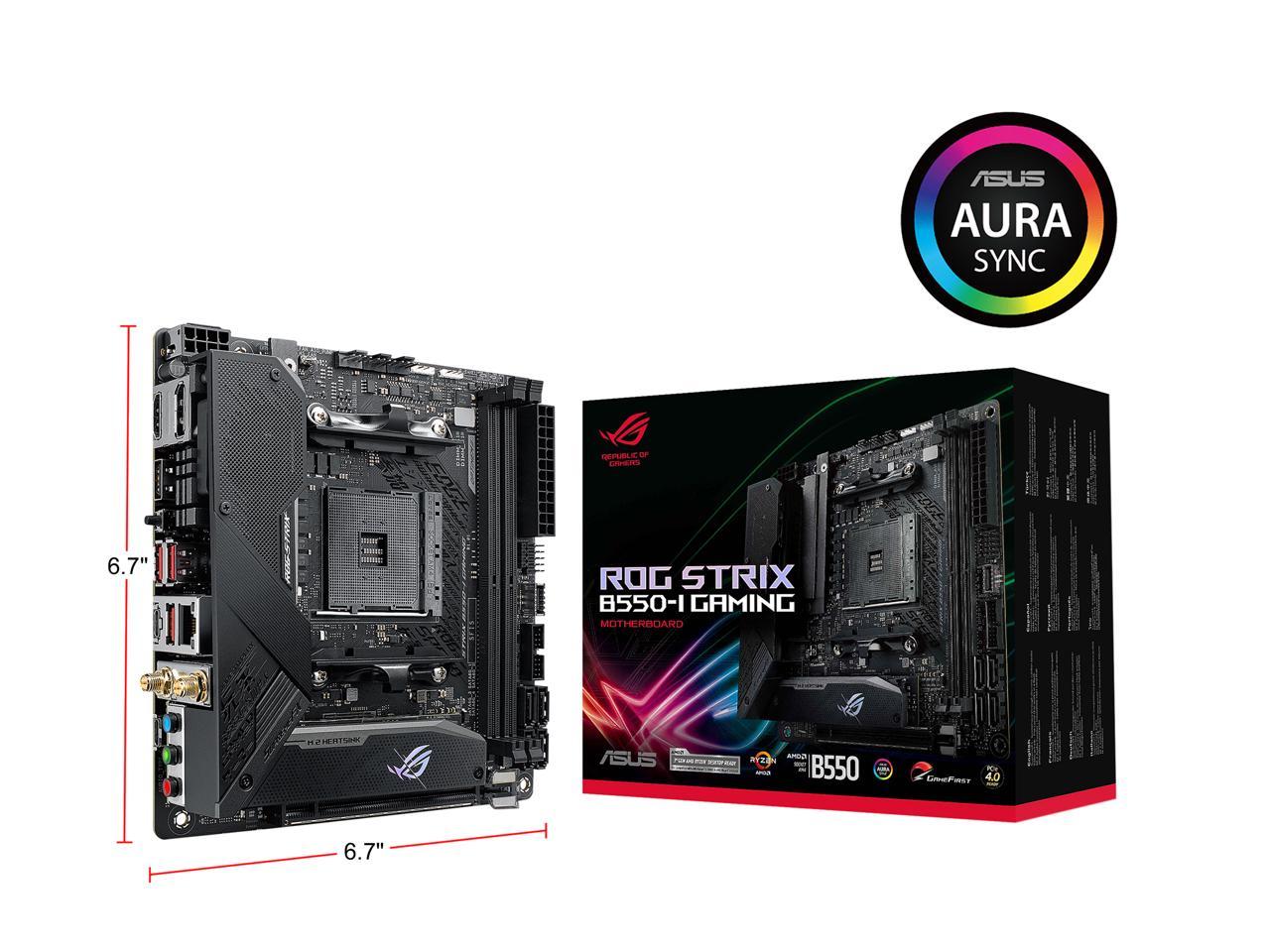 Pros: -Vrms have no trouble with an enhanced 3900x -Silent vrm fan (I've never heard it turn on) -Easy to use bios -Troubleshooting leds were a LIFESAVER (I'll never buy a board without them) -No memory issues (32GB at 3200MHz cl16)

Cons: -Onboard audio driver conflicts with userbenchmark, so you cant use that for troubleshooting (until realtek works out the issue anyway) -Chonky non-magnetic wifi antenna (works fine, just looks and feels cheap) -TIGHT m.2 screws (only an issue if you try to install m.2 inside the case) -Most included software utilities are pretty useless, but that's news to nobody IMPORTANT WARNING -used the gen3 pcie riser that came with my case (Phanteks shift air) and a 5600xt. The board does not post in this configuration. Needed to use an rx580 to get into bios and change the main pcie slot to gen 3 speed from "auto". Updating the bios brought the no post issue back so I had to grab the rx580 again. This isn't really an issue with the board, but it would be really helpful if future motherboards would try connecting to the gpu at gen3 speed after failing to do so at gen4 speed.

Overall Review: I recommend this board only if you are using a non-sandwich style case (without any PCIe riser cables.) Not everyone has an old gpu lying around, and PCIe4 does not have the same signal integrity that gen3 had. Only use certified gen4 riser cables with this board.

Overall Review: I've been using this board for 2 weeks in my new NCASE M1 / Ryzen 3700X build. I was concerned about the little VRM fan making noise, but so far it doesn't run during regular desktop use. It might run during games, but the GPU and CPU fans spin up and I wouldn't be able to hear it anyway. System runs cool and quiet, silent unless gaming! Very happy. - I removed the SSD heat spreader, that's not needed. - Some pins are tight, but that's to be expected.

Overall Review: Great board, love the features and look of the board. I really wish it had more than 4 usb type a ports. I would have purchased the x570 version of this board but it didn't have the USB type C front panel connector.

Cons: - Not now, will update in one month

Cons: - pricey (go for X570-I if available because the price difference is insignificant - I only bought this one because the higher end one wasn't available at that time) Some minor ones: - might be the case's fault, but the ports shield is 1-2 mm too far from the board and it's not trivial to plug in the USB-C port (needs some pushing around the shield) - software support (Armory Crate) spins forever while installing drivers; had to install them manually

Overall Review: I value quality and stability and this board has proven to have them both.

Pros: Plenty of headersPlenty of VRM horsepower for stock 3600 (kind of an overkill)

Overall Review: Not the cheapest, but plenty of support fot my ITX build. USB 3.2 Gen 2 Type C header: Check Separate CPU, Chasis, AIP headers: CheckNow, be warned about the location of the front panel 9 pin audio header. You must remove the m.2 heat sink, the two part VRM heat sink cover, etc. in order to access it. So I strongly suggest to either get a cable extension to connect it, or a case with ample room to do this surgery with tiny screws. Or of course, give up. The irony is that the motherboard comes with a cable extension for the power switch, HD/power LED and reset button, which is easily accessible, but not for the audio header which is not. Go figure. Not giving it five stars for this reason.Enabling DOCP (XMP), is a bit tidiuos since you need to know what you are doing when maxing your memory clock speed..Other than that, so far so good

Pros: -Easy to use BIOS -Heavy and sturdy construction -Looks great -VRM fan is quiet -The sound chip blows my old motherboard's out of the water -Illuminated rear audio ports are a neat feature -The included front panel breakout cable was easily my favorite feature. It really simplified the install. -Error code lights

Cons: -Bluetooth completely disappeared after just a few days of use -The bundled Armoury Crate software isn't really helpful. Most of the drivers are outdated and the extra software it wants you to install is useless bloatware. -The I/O cover plate's padding is extremely thick. I had to force the motherboard into it to get the mounting screw holes to line up and the I/O cover actually bulges out of the back of my case slightly. -The manual does not explain any of the BIOS features like my old Gigabyte board did

Overall Review: Despite it's price being a bit more than other Mini-ITX B550 options, I chose this board because it checked all of the boxes as far as features go. Upon receipt, the first thing I noticed was how heavy it is. It felt really solid and well made and came with a lot of extras (4 SATA cables, RGB cable, extra M.2 mounting hardware, and a breakout cable for the front panel connections). I paired it with a Ryzen 7 3700X and 16GB of Corsair Vengeance LPX 3600 CL16 RAM. There is a generous amount of room on all sides for a large CPU air cooler. My Noctua NH-U12S fit with a good bit of room to spare and no RAM clearance issues. The BIOS is pretty intuitive, even in Advanced Mode, and I had no trouble getting it set up. D.O.C.P. and PBO worked as advertised with no crashes. I've only noticed noise from the board's chipset fan once, and that was when the computer was asleep. I was prompted to install Asus Armoury Crate upon first boot. I quickly found that the drivers it offered me were outdated as Windows Update promptly updated all of them again. I also tried out the GameFirst VI app it offered me. The app blocked my connection to multiplayer games' servers and I couldn't even log in to the games until I uninstalled it. A few days later my Bluetooth icon disappeared and Bluetooth was gone in Device Manager too. I tried everything I could think of (uninstalling/reinstalling the driver, disabling/reenabling it in the BIOS, Windows troubleshooter, repairing Windows, reinstalling Windows) to no avail. Windows troubleshooter says the board has no Bluetooth capabilities... bummer. I do have a USB Bluetooth dongle I can use for my phone/Dynamic Lock and I can always plug in my controller, but I did pay for a board that already had Bluetooth to use these features... I haven't decided yet if I'm going to try and replace it again (first one arrived damaged) since the process took so long.

1 out of 1 people found this review helpful. Did you?
Manufacturer Response:
Dear Matt M, We certainly value your feedback on this matter, and I will be letting the related department know about the issues you are experiencing for continuous improvements to the product line. Feel free to contact me at cl-adrian@asus.com, and I will help you to the best of my abilities. I am here to assist our customers with our products and dedicated in bringing a resolution to all issues that they may come across. Your case for reference is N2102029307. Thank you for choosing ASUS! Best Regards, Adrian ASUS Customer Loyalty – US Support
lawlaw
Ownership: 1 week to 1 month
Verified Owner
Lots of small issues here and there, probably due to early manufactured batch of brand new product?7/19/2020 8:41:51 AM

Cons: Possible early manufactured batch issue / bad lemon for the board I got: - The Wifi 6 / Bluetooth chipset, when configured via BIOS as BT-only (so Wifi-disabled) is working intermittently, and often times may just disappear from the bus on boot-up. - The whole Realtek S1220A audio is a massive nightmare. Driver feels unstable, and worse the audio jack doesn't properly detect audio cable insertion, so one of the audio port is locked in line-in only mode, preventing me from being able o connect my 5.1 audio setup. Also possible early manufectturing issues resulting in lots of background noise through speaker-out. Going through my GPU's HDMI-out audio removes all these problems, but then that defeats the purpose of the high-end audio chipset. :( Poor User SW stability (this is not new, and is there for all Taiwanese mobo vendors): - Armory Crate and online website drivers offer slightly different versions - Aura sync and Armory Crate sometimes conflict with each other and brings down the on-board Aura connected LED lighting - Audio Driver is a massive bloatware that installs too many tools and apps, and does not allow the end user to choose what to install instead

Overall Review: Go the board delivered just a few days ago, and having wasted too much time trying to get this board to work right. :(

11 out of 13 people found this review helpful. Did you?
Manufacturer Response:
Dear lawlaw, We certainly understand your disappointment with the quality of the product that was received and the inconvenience this may have caused you. ASUS products undergo intensive quality control testing and final inspections for both hardware and software before we release it worldwide. ASUS provides warranty for the unit in order to fix or repair any isolated factory escape defect. Have you already contacted your Place of Purchase for an exchange? Please provide me with more details on this situation so we can take the appropriate steps to get these issues straightened out. You can reach me at cl-adrian@asus.com. Your case for reference is N200766274. Thank you for choosing ASUS! Best Regards, Adrian ASUS Customer Loyalty – US Support