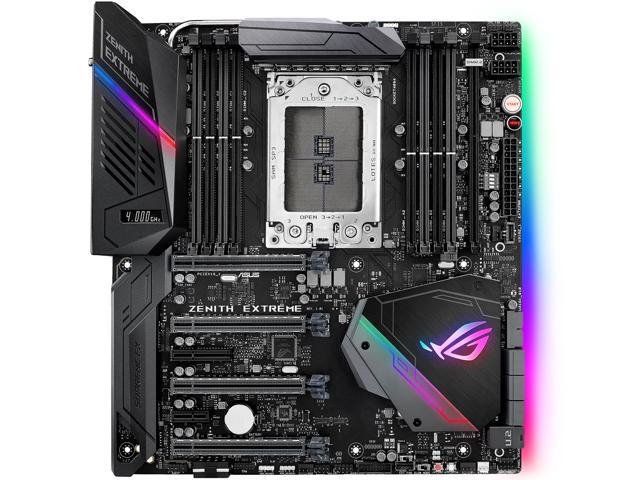 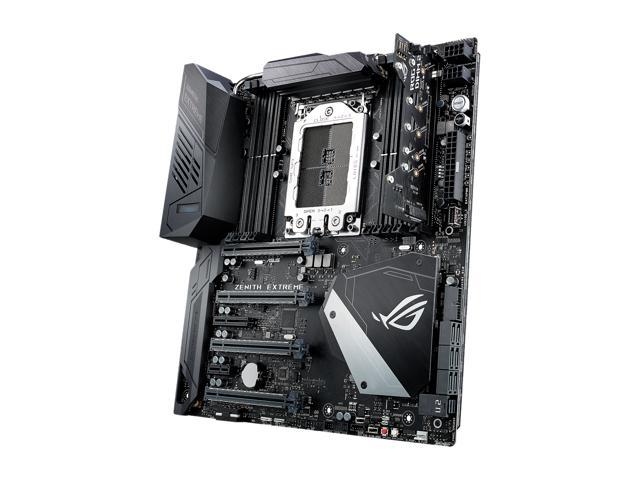 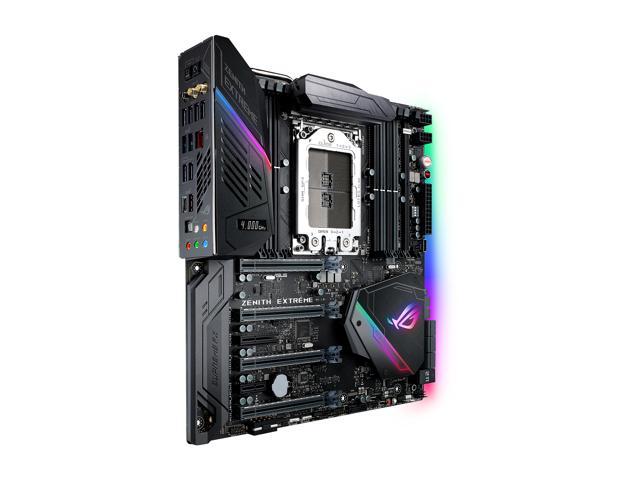 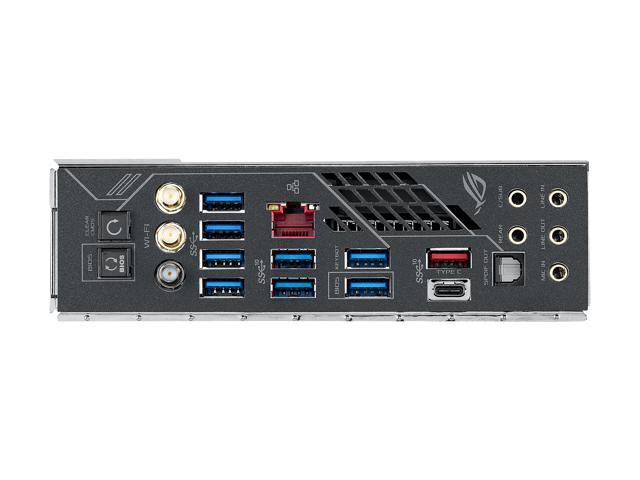 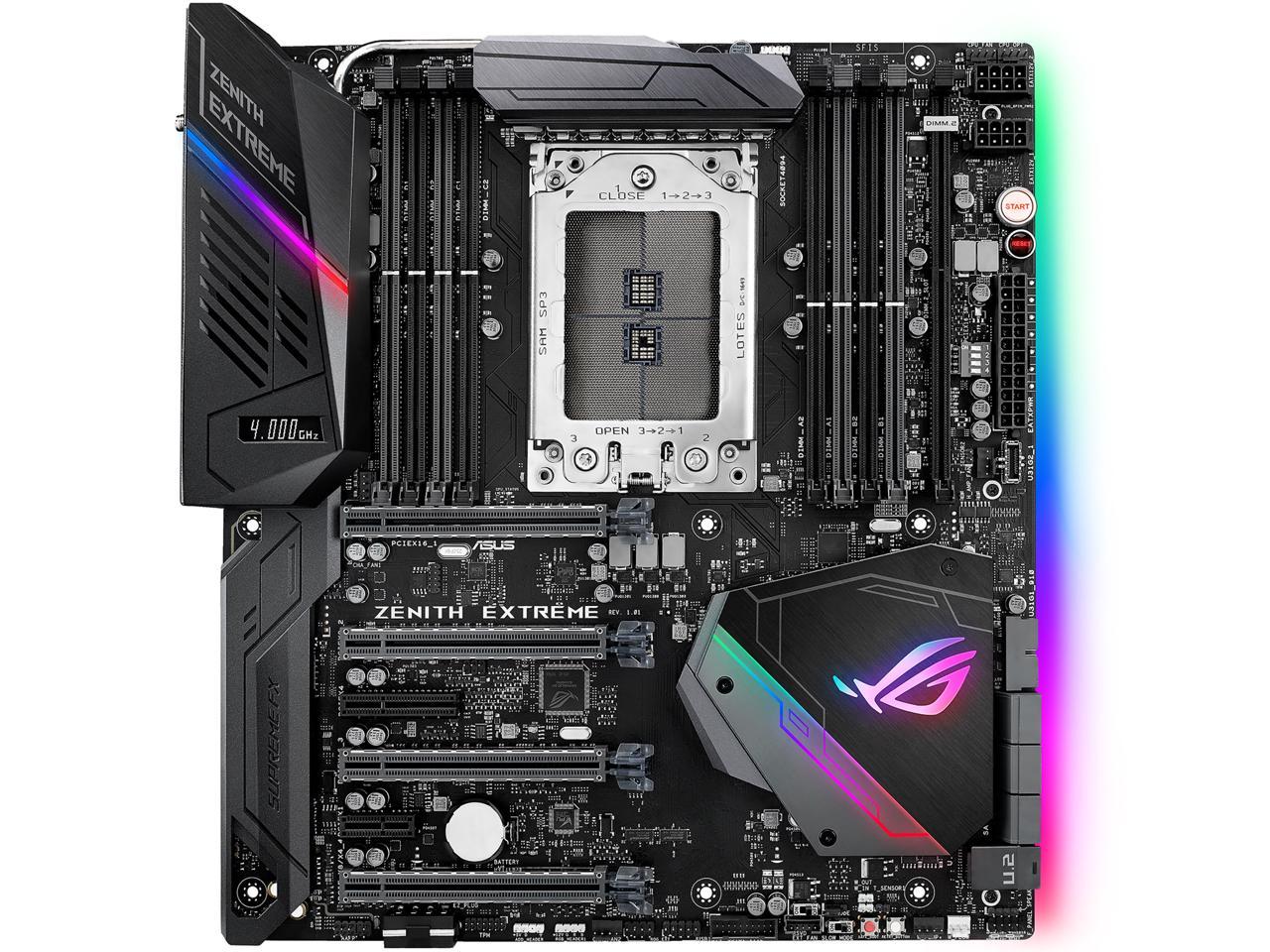 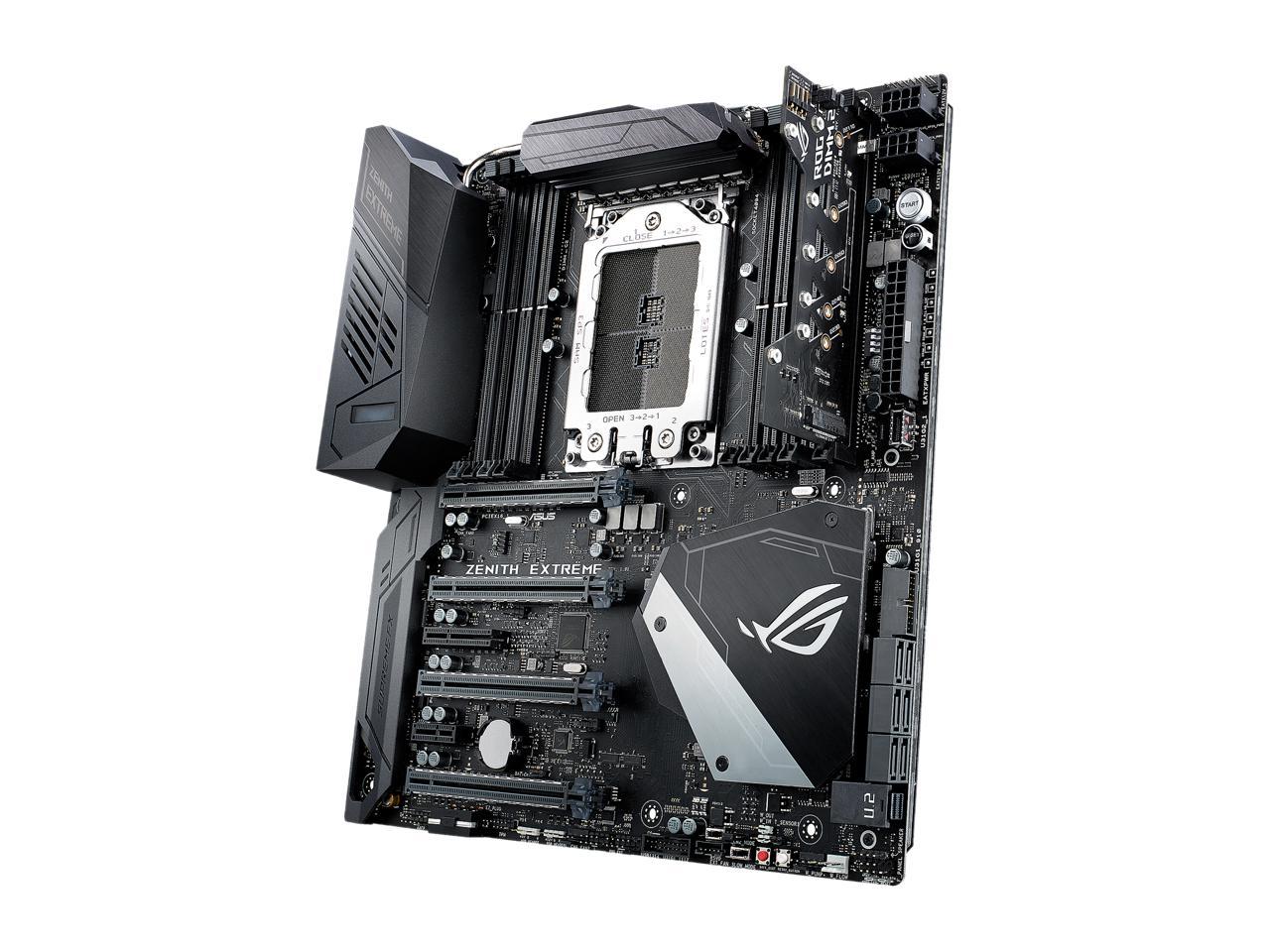 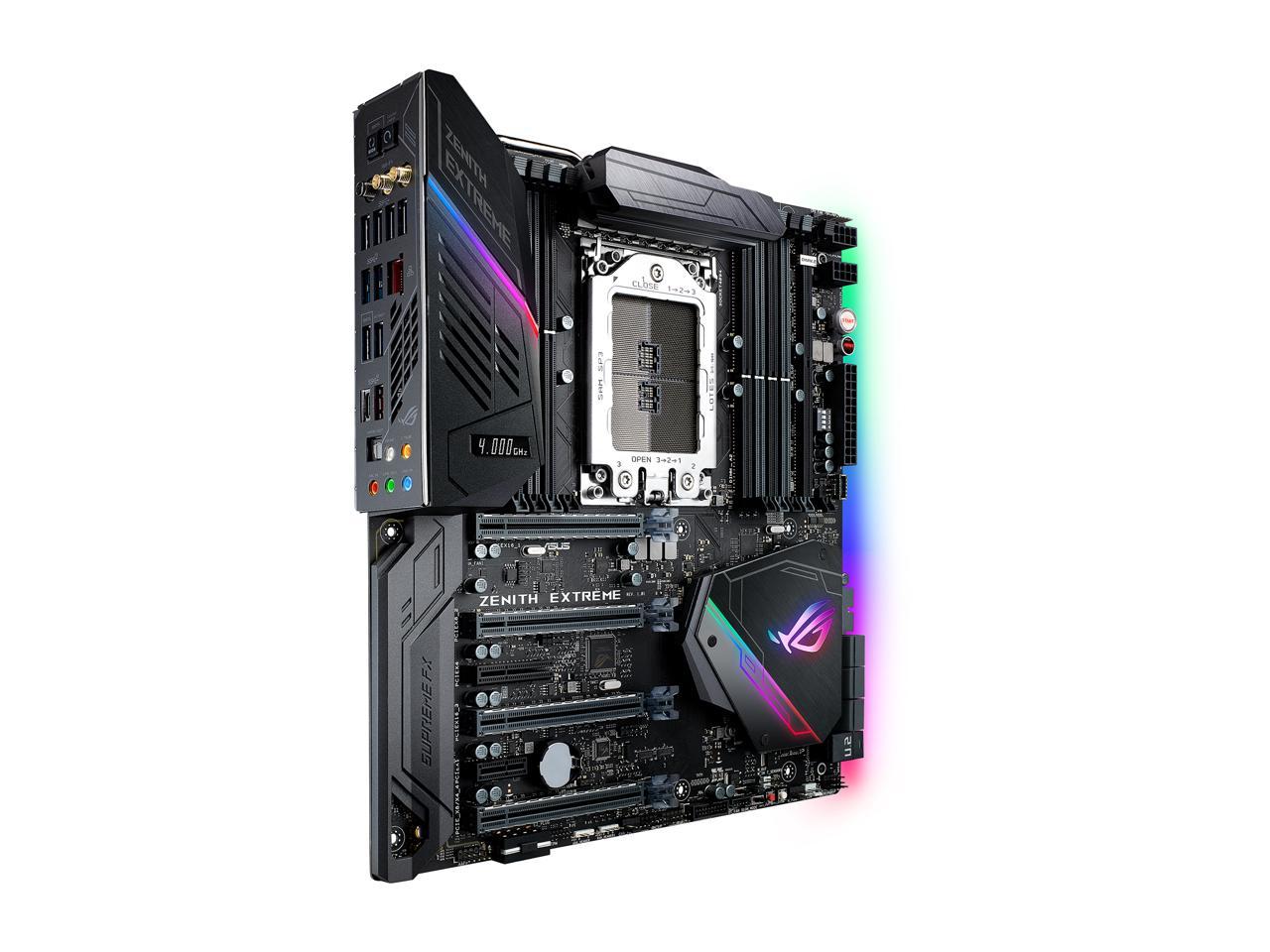 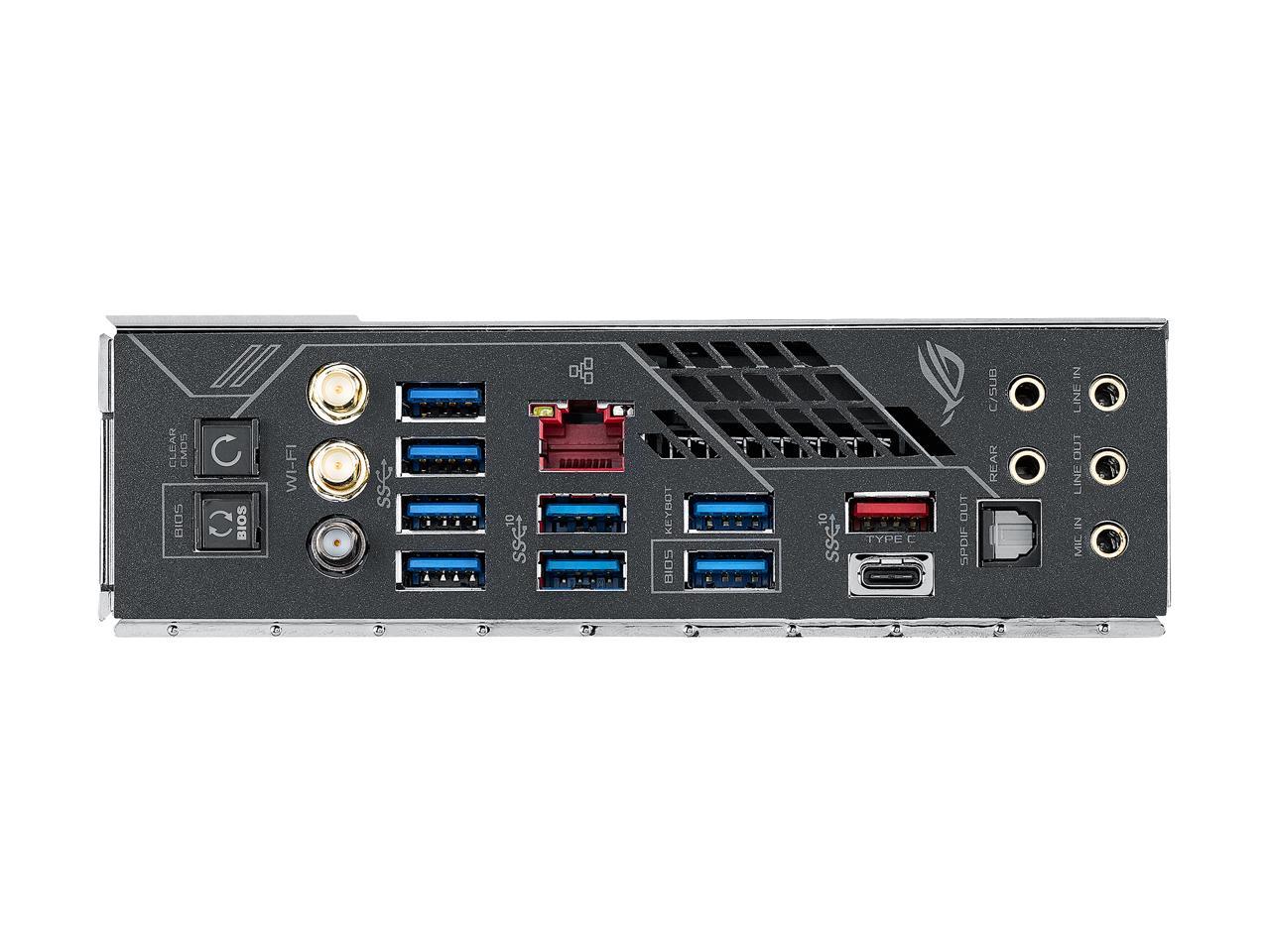 (69) Write a Review
OUT OF STOCK.
LOADING...
Overview
Specs
Reviews

Pros: OLED Trouble shooting screen BIOS is astonishing!!! You wont believe how far we have come in technology!!!! BIOS flashing is easy! so easy its scary!!! STABLE!!!!! I use this as a workstation that never sleeps!! STABLE is not a strong word enough!! Full of features and the 10G card is incredibly stable as well, coming as a "free" add on in the box i was skeptical but no more! that thing is FAST. Memory support is insanely good got my 32GB(F4-3000C14Q-32GTZR, you can get the 16GB variant too, it works like a charm!!!) RAM at 3200MHz with one click!!!!

Overall Review: In conclusion, THE best MoBo i have ever messed with, its insanely good. Truly it is. Only handicapped by a stupid CPU bracket that ASUS has no control over!! Dont RMA, dont change your RAM, after i finally posted my CPU correctly and was able to boot i tried several kits of ram memory all worked first try!! take your time, stock up on thermal paste, play some chill music and get ready to reaseat the CPU several times..... unless of course you have the LOTES bracket and it works from the first time!!!! I WILL REPEAT AGAIN IF YOU ARE GETTING ERROR 00 or C0 DONT PANIC!!!!!! THE BOARD IS NOT DoA!!!! RESEAT THE CPU and go again! :))) P.S ( shout out to level1techs ) !

Pros: It looks nice. Inclusion of a 10Gb NIC is a step towards bringing faster networks to mass market if you can afford a 10Gb switch. The status screen on the IO shroud is nice.

Cons: UPDATED: It didn't work at first, even after resetting the bios. It worked after I removed the CMOS battery for a minute and replaced it. Screws on socket are kind of a pain - it may just be the design of the retention mechanism.

Pros: I got it and all I can say is it's a beautiful board that's feature rich. The added OLED display is kinda cool. Windows installed seamlessly and now I'm pretty much taking advantage of all the power my 1920x has. The added 10G ethernet adapter is a big plus as well, and taking into consideration how much those usually go for, you're paying a lot less for the motherboard itself. I like the Dimm slots for the m.2's also. They make my m.2's run a lot cooler than my previous board.

Cons: I had trouble initially with POST when I had all 4 RAM sticks attached. I removed 2 and flashed the BIOS and I was able to use all 4.

Pros: - Excellent build quality on the board, two 8 pin CPU will provide a lot of power to the board (other motherboard’s only have an additional 4 pin) - Three NVMe slots with heat sink and raised card provide good air flow (this is very important to get full speed from the drive) - The attached back plate makes for easier install into the case - 10g NIC card is awesome (I like getting 500+ MBS on copies to my NAS, which is also 10G) - 6 fan headers let’s me hook up multiple fans - I was able to overclock the CPU to 4 GHz and RAM to 3200 easily - The OLED on the motherboard makes it easy to see your CPU temp - The RGB lighting on the board adds nice flare - BIOS flash was extremely easy with the back USB port

Cons: The screws were a pain to install on the CPU. The reason I did not deduct 1 - 2 eggs was this is an AMD issue and not ASUS, I have seen other motherboard reviews that with the same issue. I watched several videos on how to install the CPU and knew the trick not to torque down screw #1 but tighten #2 and #3. It did not work for me, I had to put all my force to get #2 to catch (this was a bit unnerving) but once it caught the rest was easy.

Overall Review: This is my first AMD build (for the past 15 years I have done all Intel). I am very pleased with the layout of the board and all it has to offer. ASUS ROG ZENITH EXTREME CORSAIR HX1000 Series CP-9020139-NA AMD RYZEN Threadripper 1950X AMSUNG 960 EVO M.2 500GB NVMe G.SKILL TridentZ Series 64GB EVGA GeForce GTX 1080 Thermaltake Floe Riing RGB 360

Pros: - Let's be honest: It's gorgeous. It's built really well (feels very sturdy). - M.2 Heatsink has significantly cooled my 1TB 960 EVO which sat under my very hot GPU on my last board. - Fan connectors everywhere. - WiGig support (Keep in mind 802.11ad is not widely supported by routers and has a limited range). - 10GbE support (Cat 6a/Cat 7 cables are cheap) which allows nice and quick local traffic even though externally my speeds don't benefit (Huge benefit with NAS).

Cons: - ASUS has a confusing download page for drivers & software, under "Wireless" you'll find both your 802.11ac and 802.11ad drivers however they are not marked as such - 12.0.0.309 is your 802.11ac driver and 1.1.5.89 is your 802.11ad, both are named "ASUS WiFi Driver" and only the 12.0.0.309 driver is shown on page-load (you must expand the wireless section to view the other driver) - ASUS doesn't have any way of viewing the description of things on their drivers & software page. I have not deducted an egg as I feel these issues are not a significant downside and don't directly relate to the board (though they should be rectified if time permits).

Overall Review: I'd buy it again. Although admittedly probably after 8/25 because that's when the free 120GB SSD offer kicked in which I unfortunately missed out on.

Pros: Solid construction. Board layout is nice. I really like the placement of the power connectors. Includes lot of extras as it should considering the price. I installed beta bios 503 first. The bios is easy to navigate. I’m running 4 x 8 gig G.SKILL Flare X Series 16GB @ 3200 with no issues at 1T. Over all I am pleased with this motherboard. I'm a long time user of ASUS motherboards and ASUS has always given me top customer service when I have issues. I'm confident this issues will be corrected with bios updates.

Cons: To those having issues with the cpu screws. Barely start the screws just enough to get some traction. The problem with mine was the screws need to be about 2-3mm longer. Like with any metal or plastic, tightening one screw(as directed via the instructions) does move the mount even if you cannot see it. Since the screws are barely long enough to connect, this is what causes the issues many people have described. If you start each screw then you will have no issues mounting the bracket. ASUS if you are reading this please add longer screws which solves this issue. Some software is still not Threadripper ready. Not a big con as it is to be expected with a new platform.

Overall Review: My Windows 10 Pro ran like garbage when I installed it on this board. My Samsung 950 pro m.2 literally was running about half speed. The whole system was sluggish and ran bad. The solution was to disable hpet in windows 10 which made a world of difference. The x399 drivers do not install AMD SATA drivers. You got to update the drivers manually and point to the AMD driver folder. Easy fix but should auto install. ASMedia® USB 3.1 Gen 2 controller does not have drivers provided. Windows 10 detects and installs it perfectly but I am not sure they are optimized to take advantage of this controller.

7 out of 7 people found this review helpful. Did you?
jean-francois b.
Ownership: 1 week to 1 month
Verified Owner
Solid motherboard with a few quirks that will be fixed in future BIOSes8/27/2017 7:11:16 PM

Overall Review: I had the choice between the AORUS (received first) and this one. I finally decided that the Zenith will be my definitive board. The overclocking is pretty good, even if the BIOS has more option than for the AORUS. I've been able to O/C @ 3.9GHZ 1.25VCORE without any problem. (temps with 23 degrees room; 25 idle / 45 active / 65-75 stress 100% with a "simple" H100i v2 ) The only drawback is that I can't put the G.SKILL @ 3200, so for now it stay at 2666Mhz. which isn't bad because the computer stay pretty fast. It's just a question of a future BIOS update. Physically speaking, what I haven't liked in contrary with the AORUS is that the DIMMs slots were all pretty tights, and put the sticks in them were really a pain (seriously). Some were OK but about 40% of them were really difficult to use. Anyway all is OK, but I wouldn't like to change a stick in it. I didn't have any problem of this kind on the AORUS. Anyway overall, a pretty solid motherboard.

Pros: I heart you ASUS!! Though you about lost me lol

Cons: As for the cons. I got the Threadripper Gen2 2990WX and got everything installed/hooked up and fired it up. Would not post. Was getting at first, D0 error and was saying Detecting Memory. So I tried using only one, two, three memory sticks. Same error. I have the Corsair Vengeance Pro RGB 32000 (Side note, currently seems the Memory isn't detected by Aura Sync :( Hope that gets fixed) Anyway, I digress, I have a buddy that has the same board and is using the Triton Z 32000 and his all works, lights sync and so one. So I borrowed a couple of his sticks of memory and tried them on my board. Fired it up with two in, and got a C0 error and the computer would keep shutting down and starting up. Tried with one stick of his memory and would still get the same error C0. It didn't keep shutting down, but wouldn't post. Started looking on line for possible causes. Some say to keep trying to re-seat the processor a few times. Tried that about 8 or 9 times, no luck. Only thing that happened was me almost stripping the screws on my AIO. Others would say make sure your memory was in the correct slots for what you are putting in, that was not the issue, and so on and so on. So I decided to have my buddy put the memory I got in his system and it worked just fine, other than the RGB sync. So the memory wasn't the issue. So I was like, whelp, i'm throwing in the towel and just going to get the MSI Creation board and send the ASUS back, which bummed me out as I completely dig ASUS. A couple days after ordering the MSI board, my friend and I were looking for anything else that could cause this. Came across a post on how to update the bios with a processor. So, we were like, lets update the BIOS and see what happens. Did the BIOS update, plugged all my memory in and BINGO!! it started working!!! I have since got Windows installed and everything is running great!! I will no be holding on to the ASUS board and will be sending back the MSI board for a refund.

Overall Review: So if you are experiencing these issues. Check out how to update the BIOS with out needing a processor and, at the time of this, 1402 is the latest version. Once updated fire it up!! I hope this helps!! ASUS, lets get the Corsair Vengeance PRO RGB memory compatible with Aura Sync! If it is, then I am missing something lol.