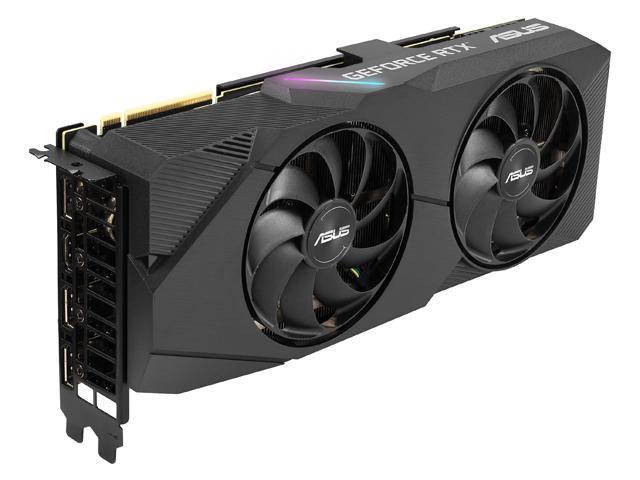 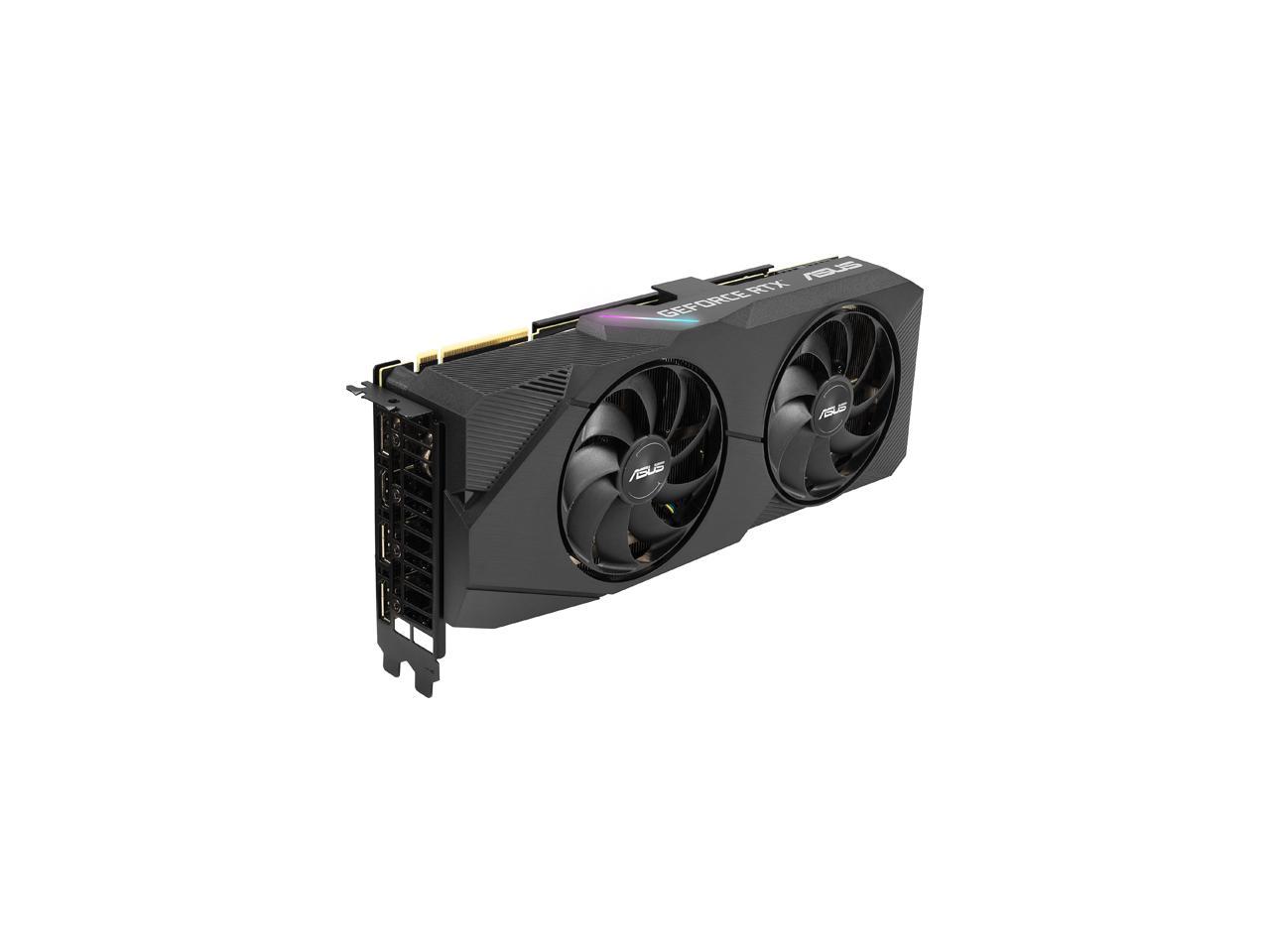 Learn more about the ASUS DUAL-RTX2080S-O8G-EVO-V2

Pros: Review: This card is replacing an old MSI GTX 980 ti whose life I stretched for as long as possible with overclocking. But it is now time to pass the crown, at least for a short while, to the RTX 2080 super. Out of the box, it was easy to setup. Though admittedly I opted out of using ASUS tuning software and went with MSI Afterburner instead. With the OC Scanner in afterburner I managed to get an easy overclock of just above 2ghz on the core clock but the memory was untouched and may lead to more gains but for now, temps never get above 73C in game or stress testing so I am leaving memory alone. I would suggest maybe picking your own fan speed though as the stock profile could make it get a little spicy in there and if you have some airflow impedance in your case, it could end up leaving warmer ambient air inside which isn't nice. So I put the fans up to 80% which is actually about equal with my case fans so pretty easy to tune it out. Another thing I am liking is that the card itself seems a little more rigid than my old 980 ti and seems to have almost zero sag on the plug end and I am very happy about that because I don't need to use any brackets to keep the GPU straight (not that it's necessary, it just drives me nuts to see sag) the old 980 TI would get 3dmark time spy scores in the 6500 point range which is respectable but that was with overclocking the card to darn near its limit. RTX 2080 super scored 11,300 in the same time spy test. So for someone coming from an old GTX 9 series card, this will be an enormous boost in performance before doing any in game tests. RDR2 - quite surprising just how hard that came is on hardware, but with the settings maxed out (not touching the advanced settings menu) I am able to get solid 60 FPS just about anywhere in the world on a 2k screen. Whereas my 980 ti, I could only have the settings on a mix of medium/high in order to get close to 60fps constant. So for that game, I'm happy I upgraded because the visuals are absolutely worth the hassle. GTA V - similar story to RDR2. It's an old game but still pretty intense on hardware and now I can run the game maxed out and close to or above 100 fps. Though I've kept it locked at 60fps just for consistency and it is less strain on the card. Fallout 76 - Now this game can give any card issues because of its online nature and poor use of system resources, however, this card did seem to help out a bit on areas that are hard on vram and overall the experience was a lot smoother. But ultimately your mileage may vary with this game. NOTICE: I put "good" in quotes because while this is indeed a very powerful card, it is not the best bang for your buck. So unless you are in a more financially secure point in your life, the better deal may be going for a 2070 super instead or waiting for nvidia's 3xxx series later this year.

Cons: The light on top of the card does not seem to be programmable so it seems you are stuck with a pink/blue scheme on top. Unless I've missed something.

Overall Review: Really wish it was cheaper but if you have the money, you won't be disappointed. Unless of course you are upgrading from a 2070 or 2070 super.

Pros: Card was great while working. Ran games like Warzone and AC:Valhalla on ultra settings with great frames.

Cons: Died in less than a year (purchased April 2020). System shutoff randomly, would not boot if the GPU was plugged in. Swapped out to a brand new power supply to be sure, same issue. Computer boots up with spare GPU's and integrated graphics. Card is pre-overclocked, and I made no changes to anything (including CPU, ram, etc).

Overall Review: While the card is great, it really depends how my RMA process goes. Will update once I reach a resolution.

Manufacturer Response:
Dear Adam, It is unfortunate that your video card is no longer working after a year of use. It looks like you have already tried troubleshooting to no avail. If you did not know, we offer 3-year warranty on our graphic cards. If you need help with getting that processed, feel free to contact me at cl-justin@asus.com and I will help you to the best of my abilities. I'm here to assist our customers with our products and dedicated to bringing a resolution to all issues that they may come across. Your case for reference is N2102075797 Thanks for choosing ASUS Regards, Justin ASUS Customer Loyalty – US Support
Anonymous
Ownership: more than 1 year
Verified Owner
DIED AFTER 1 YEAR & 7 MONTHS11/10/2021 6:24:26 PM

Overall Review: So I owned the card for 1 year & seven months had no issues until one day it suddenly black screened. I took it to a local Memory Express & they checked all the components. It turned out to be a worst case scenario and was the graphics card I dont think Ill trust ASUS graphics cards anymore.

Pros: Stay pretty chill and quiet under load, has led lights at this price point.

Cons: There is a little bit of sag, and the light can’t be configured to anything but the stock color of purple

Overall Review: Amazing card. Upgraded from a 1060 3gb and its a huge improvement

Overall Review: Overall it’s my second graphics card ever after the GTX 1070 and the step up made my gaming experience exponentially greater. Both performance wise and visually. Using this card has been a dream for the past month and I couldn’t have picked a better card! My only nit pick is how it just perfectly goes over my motherboard fan. But honestly I don’t care because my thermals never go above 69c. I love how it looks and I he thickness of it even though it’s the smallest con.

Pros: Runs quiet Great for a small form factor build that can fit a 3 slot graphics card Can easily keep temps down with a slight undervolt

Pros: Never had any issues with this card its been probably a steady 2 years that Ive had it and it runs like a champ. Theres also an asus program that makes overclocking dummy easy with the press of a button! Overall great product but easily overshadowed by the new RTX3000 series.

Cons: A bit expensive.. with the new rtx 3000 series coming out this videocard pretty much lost its bang for its buck. You can pretty much get the same power out of a RTX 3060 for 300$ less than the rtx 2080.

Overall Review: Great but if youre able to get your hands on a rtx3000 series go for it. Much better card for cheaper price but good luck finding one.