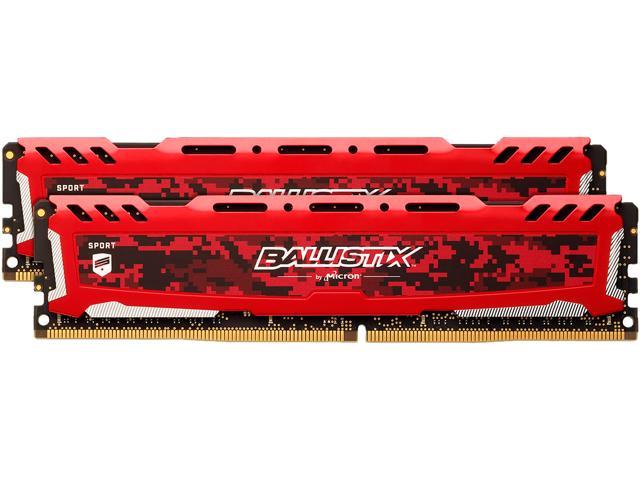 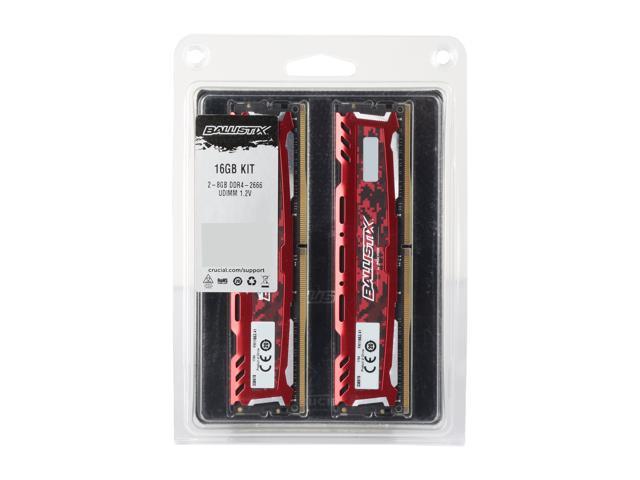 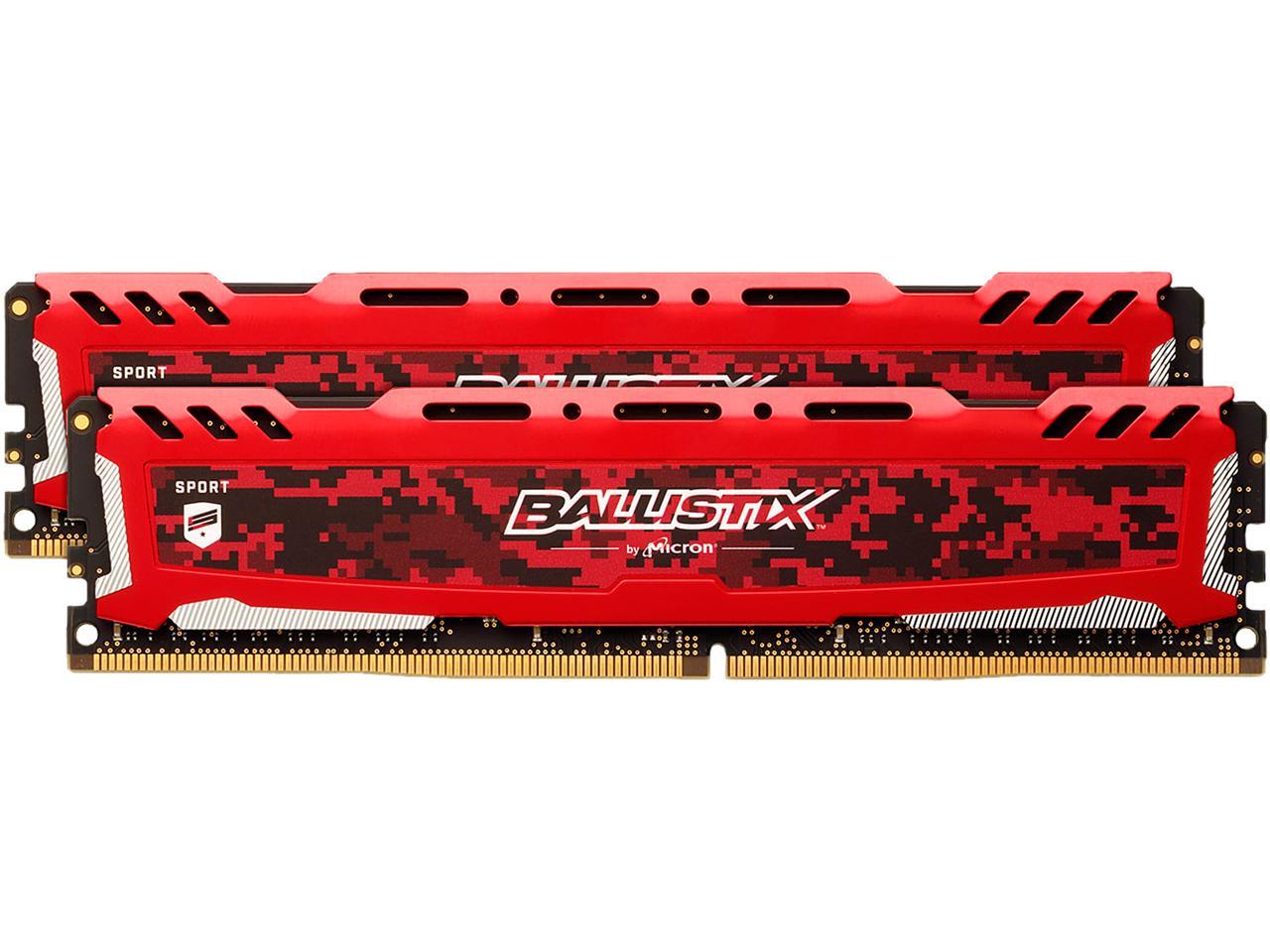 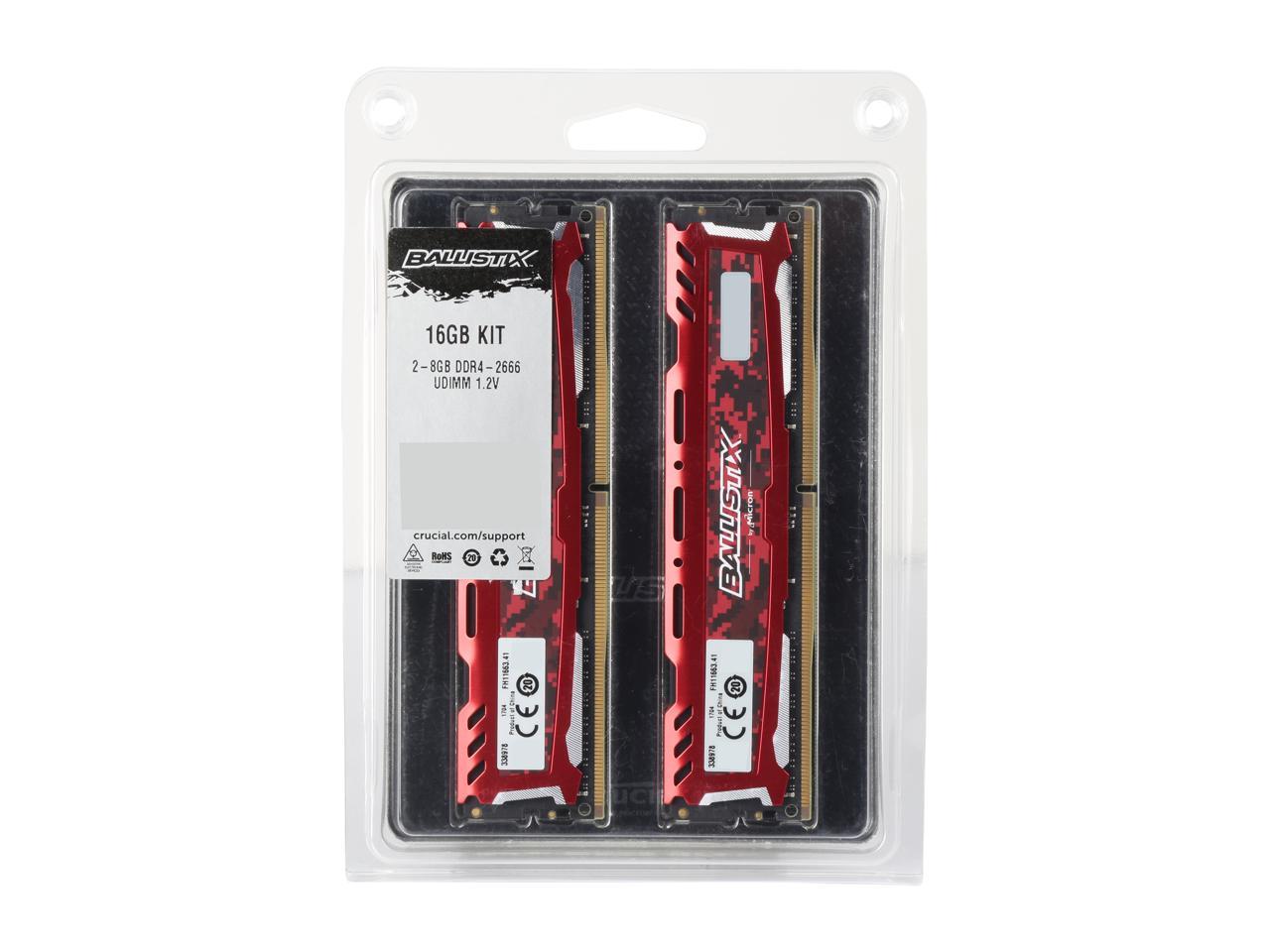 Learn more about the Ballistix BLS2K8G4D26BFSE

Overall Review: I wanted to squeeze more timing out of it but the above is as best as I could do at 2933mhz. A perfect gaming speed and timing combo!

Pros: I used the RAM on a new build with a Ryzen CPU and ASRock Mobo. The RAM was inexpensive and the system started up without issue. It's been running for 3 weeks.

Pros: No issues, RAM was discovered by the BIOS right away. This is as fast as you can go with stock DDR4 voltages. Worked fine with an ASUS Prime X370-Pro. While this only appears on the ASUS QVL, I would imagine other Ryzen boards based on the X370 should have compatibility with this RAM. Unfortunately that motherboard gave up the ghost after three months, but the RAM works good. Memtested for 12 hours with no problems. Also, the heat spreaders / decorative metal is low enough to fit under a horizontally mounted Noctuna cooler for those of you who have not migrated to water cooling yet.

Cons: One of the four sticks was DOA. Newegg should be sending me a replacement shortly.

Overall Review: Curiously, one stick had a sticker that said MADE IN THE UNITED STATES. And the other three had stickers that said MADE IN CHINA. For what its worth, one of the Chinese sticks was the DOA one. Also when checking with a HWinfo the USA made chip had all its fields filled out in the ROM so the stick told me when it was made, in what plant it was made, what tech worked on it, the results of the QC testing, etc. The Chinese made sticks reported no useful information where queried. I would like Newegg to offer me the option to specifically request US Made versions parts if such an option exists instead of "luck of the draw"

Pros: Popped it into my MSI b350 gaming pro motherboard and it just worked straight away. No need to adjust the clock settings in the bios.

Cons: I wouldn't mind a bigger heatsink, cooler is better! But if I want to custom air cooler, these won't be an issue. So eh.

Pros: very stable ram, the fastest speed with the best performance, do not get any faster than 2800mhz. the cost performance ratio starts to decline.

Cons: none so far with crucial ballistix sport lt ram, one of the one ram models I buy.

Overall Review: great ram, recommend, very stable, have not tested it in overclocked mode, but I'm sure it would do fine. I only use Crucial Ballistix sport, G.skill ripjaws 4, teamgroup elite, and Corsair Vengeance ram. crucial is the best price, but it could be better.

Pros: I was able to step up the speed to 2800 in BIOS and its stable! Low profile, i have a hyper 12 EVO CPU cooler and this ram has about 3mm between CPU fan and RAM heat sink where other ram ive tried required me to slide the fan up which affected cooling Low cost. Nice aesthetics. Stays relatively cool.

Cons: These are nit picky but; Hard to seat into RAM slots, takes A LOT of force to get these fully seated, i had to remove my mobo and do it on a piece of foam on my coffee table (i know it takes quite a bit of force to actually break a mobo but when it flexes in the case its unnerving) Heat sinks tend to slide when you go to remove the stick, its an issue you can avoid by grabbing in a different area but its still annoying (told you, nit picky) Thats it really, these are great ram sticks, i will be buying more once ram prices go down