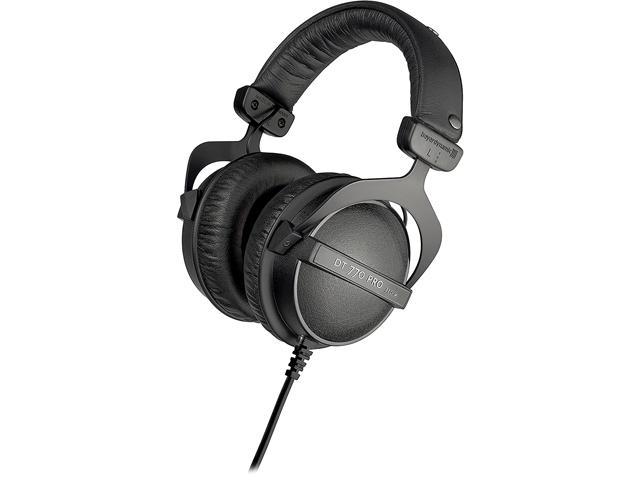 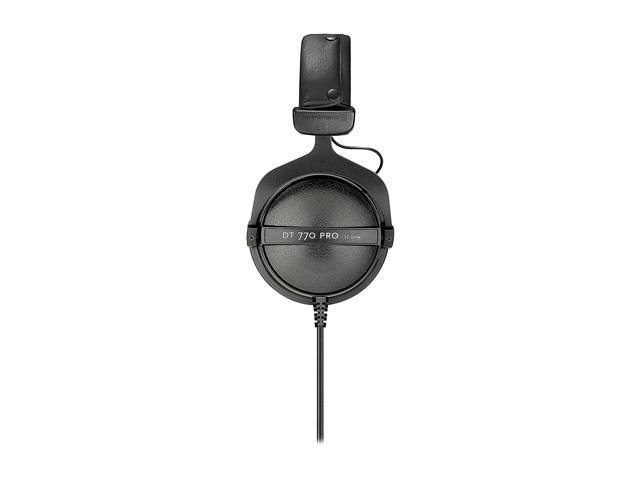 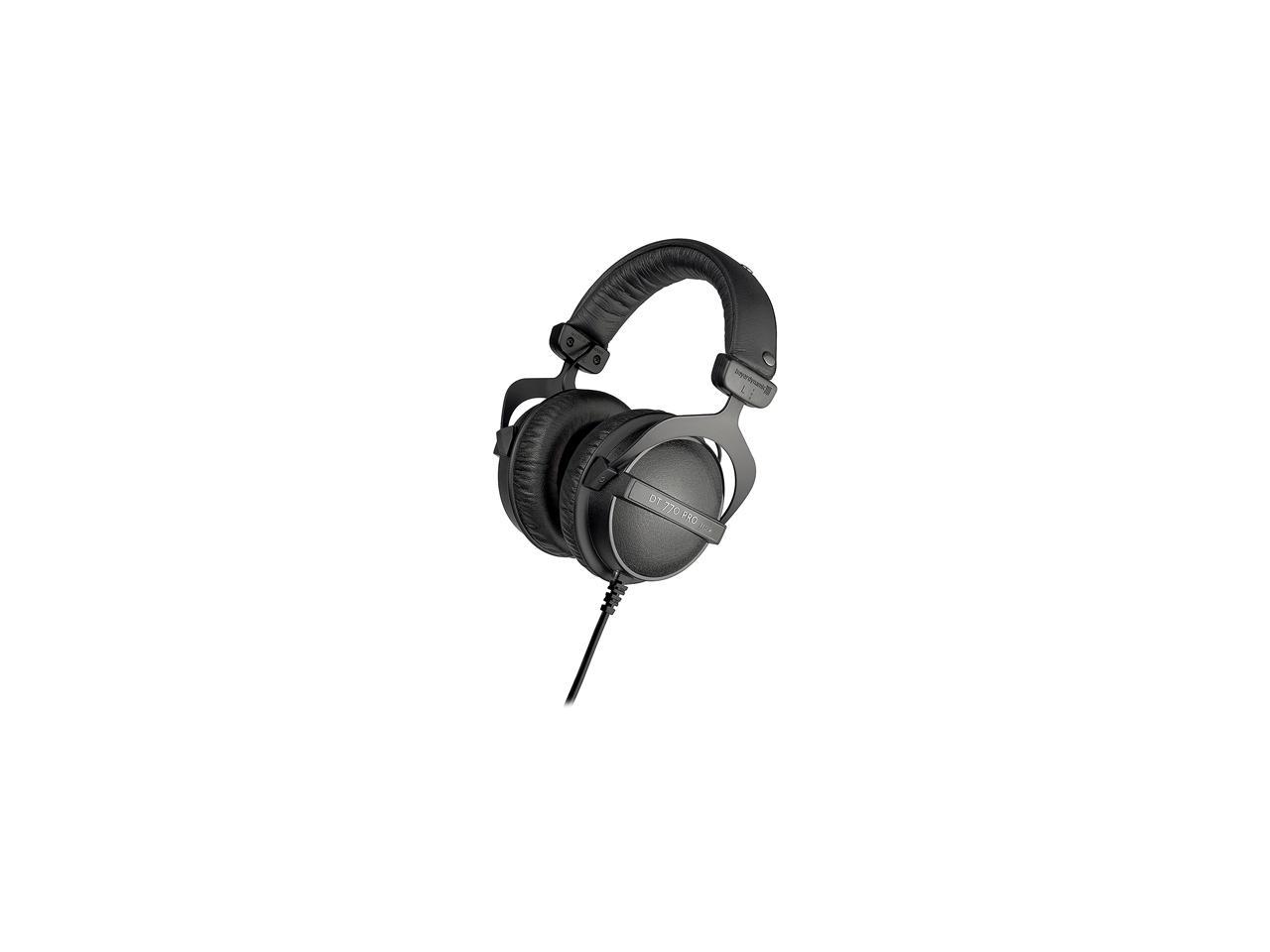 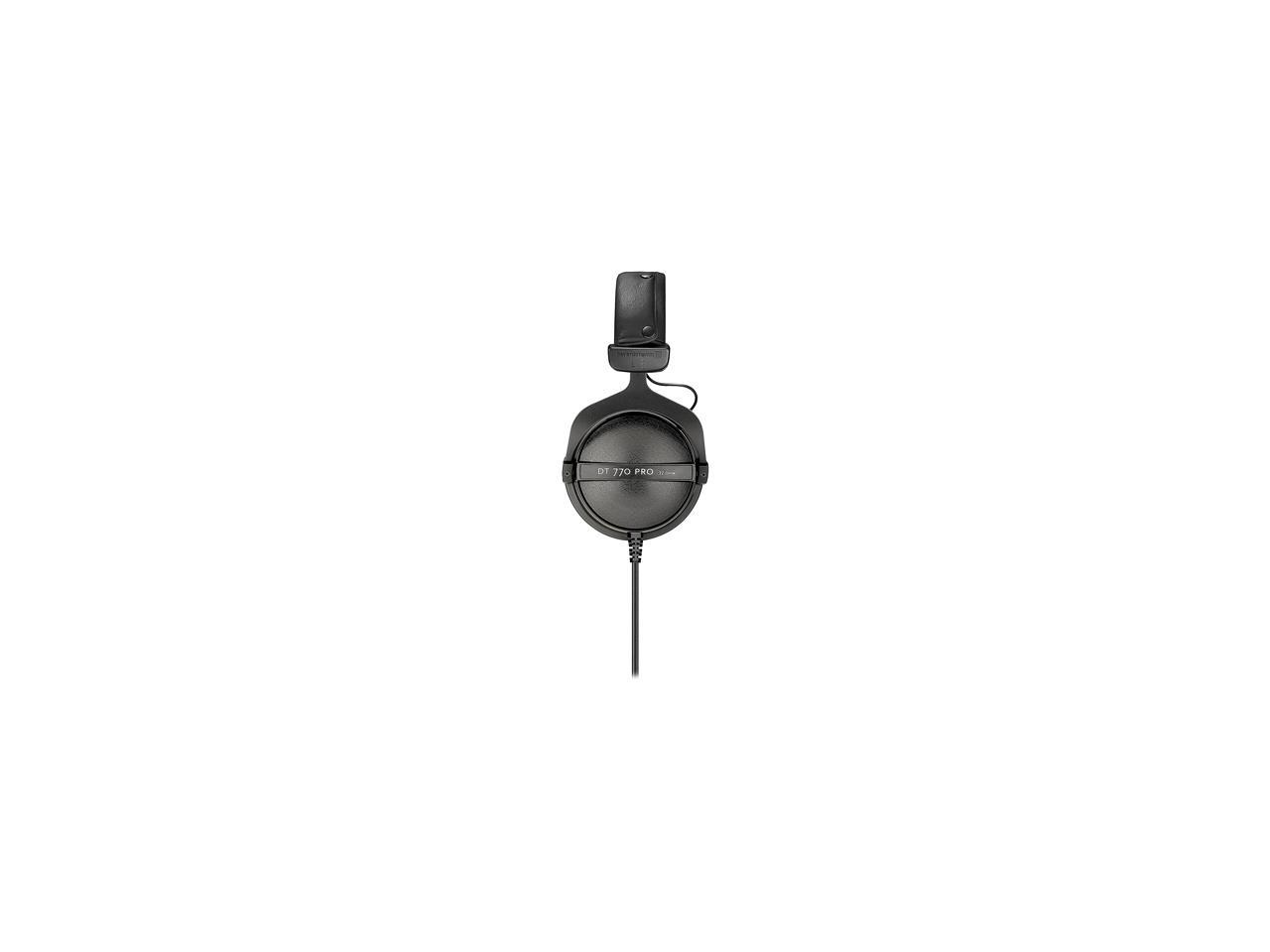 For decades now, professional users all around the world have placed their trust in our classic range: DT 770/880/990 PRO. These benchmark-setting studio headphones, available in three different models, boast extremely detailed resolution and very transparent sound.

The DT 770 PRO headphones is the range’s closed-back model and offers maximum flexibility and detailed sound that you can rely on. The beyerdynamic DT 770 PRO headphones have established themselves as a firm favourite amongst music producers, sound engineers and broadcasters and are used in studios all over the world. They reproduce the entire frequency range with incredible precision, and even reproduce low frequencies in punchy detail. The headphones are designed for critical music and sound monitoring, providing a perfectly neutral listening environment with exceptional isolation and top-notch impulse response. High frequencies are translated into an analytical and differentiated sound. Ultra-low bass sounds are defined and reproduced crisply. The robust spring steel headband ensures a secure fit for the wearer. Soft ear cups mean that the headphones are comfortable even if worn for prolonged periods. The single-sided cable allows the headphones to be put on and taken off frequently without cables getting tangled.

Headphones for when you’re out and about but not prepared to compromise on studio sound.

These 80-ohm headphones are the ideal choice for a range of studio applications.

With an impedance of 250 ohm, the DT 770 PRO headphones are perfect for mixing in the studio.

The DT 770 PRO headphones are and always have been handcrafted in Germany. The materials and component parts used are painstakingly made by hand and can be replaced if necessary.

Pros: I am not an audio specialist. As a total ignorant in that field I am really satisfied by this product. I use it with a MonoPrix DAC. I am sure this amplifier is not high end quality but the difference with my previous Kingston headset directly plugged to the motherboard sound chip is huge. Sounds are crystal clear, powerful and you can hear small sounds, details in the background. The headset is comfortable and isolates pretty well from external sound, typically cars outside, my computer fans and the fridge not that far from my PC.

Cons: The plastic which makes it feel a little bit cheap

Pros: Deep crisp sound. Didn't realize how good they true are till I tried my Bose headphones again and it wasn't even close. Bass is very good on these headphones and do pretty good at cancelling out sound outside of headphones.

Cons: The cans are pretty big and take a little bit to get used to. Not quite as comfortable as the audiotechnias my buddy has.

Overall Review: I had sound problems with my MOBO and Graphics card so I didn't get the full package due to not enough power to them. So I bought a sound card. Since then Couldn't ask for anything more with these headphones. I absolutely love them.

Pros: Great stereo field and separation. Makes it a nice reference for mixing and a good choice for playing FPS games. Good detail in the highs and high mids. Haven’t noticed any hyping of the high mids or anything else that would accelerate ear fatigue Bass is respectable. Not as deep as, say, ATH-M50s but definitely better than I’d been led to believe of these headphones. Very comfortable. Doesn’t pinch at the temples or dig in if you have glasses on. Nice soft sort of velvety fabric over the ear pads. Coiled cable- convenient for a large desk with gear/controllers/electronic instruments all over it. Doesn’t get tangled up around other gear (or itself) like straight cords.

Cons: I’ve read that these aren’t an especially neutral headphone, at least as far as monitoring headphones are concerned. I haven’t had them long enough to really get a feel for where they have peaks and dips, but I did notice that most of my mixes sounded better on these than most of my other headphones. Part of that is because of the superior stereo image, but some of it might be a favorable response curve as well. Makes them great for audiophiles, and still very good for audio engineers or musicians, but I’ll be sure to compare them against other things while mixing The plastic piece that connects the headband and the actual headphone feels cheap. When I first opened these up I thought I’d have to send them back. The left phone would wobble a bit, and the plastic connector piece would make a clicking noise when it did so. It seems this only happens when they are fully retracted, which is too small for my head, but I’m keeping an eye on it during the return and/or warranty period. It’s an unfortunate blemish on an otherwise solidly built product.

Overall Review: I’m quite impressed with these already. Could very well be the best set of cans I own, overall. The excellent stereo image is a real highlight feature for me.

Pros: -Audio is crisp and clear -Bass is solid -Loud -Comfortable to wear -Surprisingly low amount of plastic. The band is even metal, but covered in a buttoned-up pleather sheath I purchased the 80 Ohm version and I'm not using an amplifier, but honestly they beat my pair of Audio Technica M50x easily.

Overall Review: Seller was fast at shipping and even responding when I had troubles with USPS. Would order from them again for sure!

Pros: Great bass (80 ohms). Tight with great extension. Very comfortable. The earcups cushion your ears well. I did feel a little discomfort cause of glasses that I wear and the clamping force was tad higher. I reduced the tension by holding the headband and pulling it for few seconds. These are fun to listen to, definitely recommended. Note:

Cons: They don't fold and are bulky.

Overall Review: Cable runs long and is not detachable. You might need an amp for portable sources although I won't recommend these for portable use. I was using Sony MDR-V6 as my daily driver and these replaced them. MDR-V6 still reigns for $50-$60 range imho

Pros: Very strong lows, Good mids, And exceptable highs. Build quality is very nice. Removable headband/Ear cups. Nice metal construction where it counts. The earpads are some of the best stock I have ever seen.

Cons: None detachable Cable. Rubber wire, Not fabric/Braided. Non folding, But that last one isn't really a con.

Overall Review: The Fiio EK10 DAC/Amp is a small power house and a perfect fit for these. grab them together if you can.

Cons: Proprietary 3.5mm to 1/4" phone jack adapter I want to attach a picture of the adapter, but can't seem to do it here on newegg.

Pros: Been using for a few weeks now. So far I haven't used an amp with them yet but just running it off a laptop and a desktop they sound great and are plenty loud for casual listening. Haven't tried using a phone with them but I'm sure they would work just fine (But might use a lot of battery life due to high Ohms). I'll update my review once I get a proper amp. Has a good headband and feels sturdy to use. Doesn't feel flimsy or like it is going to break easily. Cloth earpads are much better than usual faux leather that fades and chips over time. A good purchase knowing there are replacement parts for headband padding and earpads.

Cons: The only negatives are that they are a bit tight for the first week for people with larger heads, but once broken in its fine, and that the adjustments for the headband are plastic and feel like the flimsiest part of this mainly sturdy headset.

Overall Review: Overall It's a great headset for the price and would work best with an amp, but one isn't necessary.