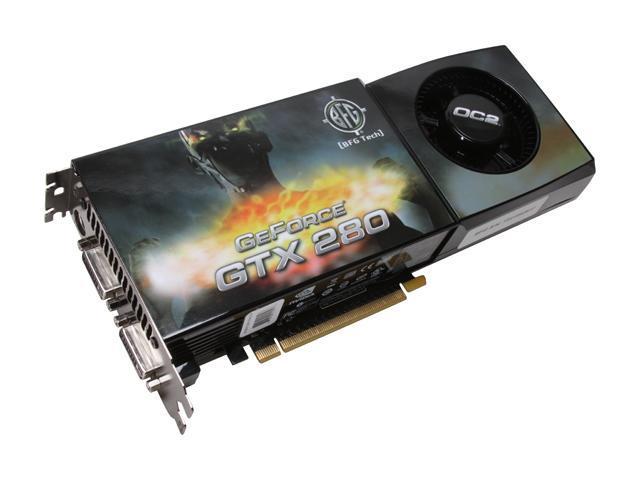 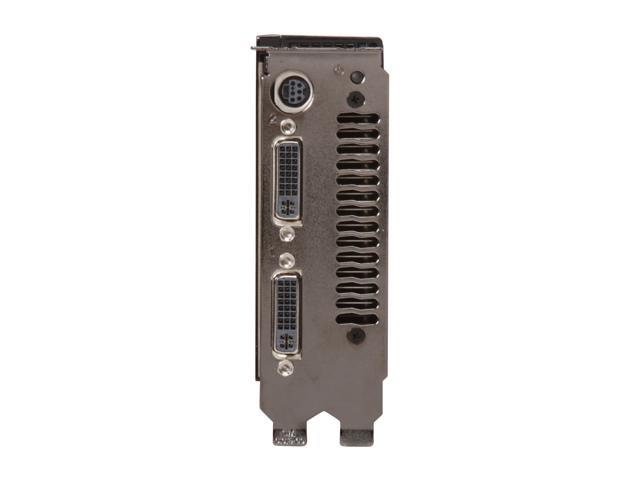 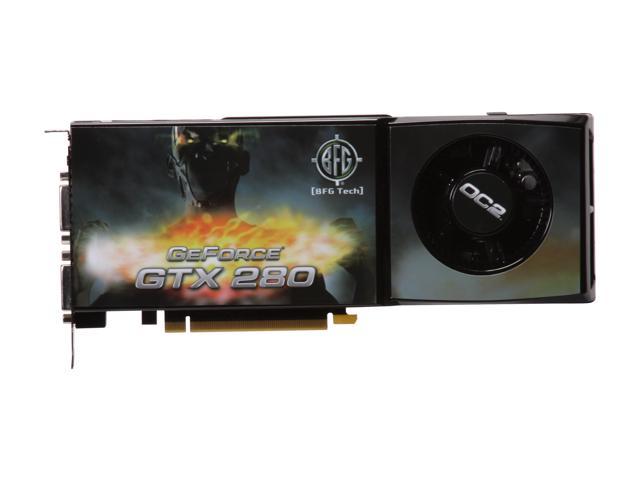 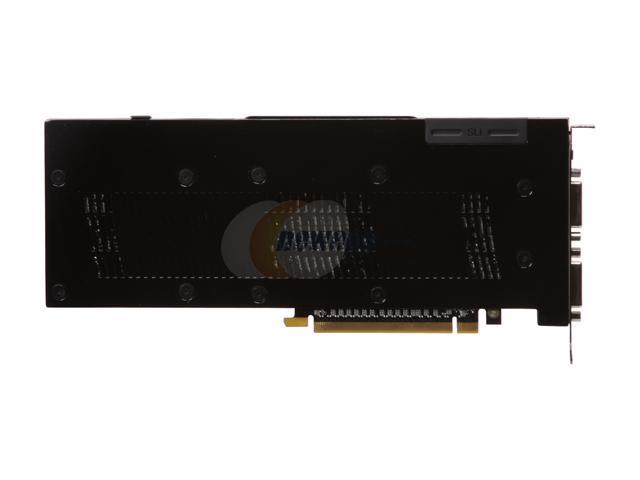 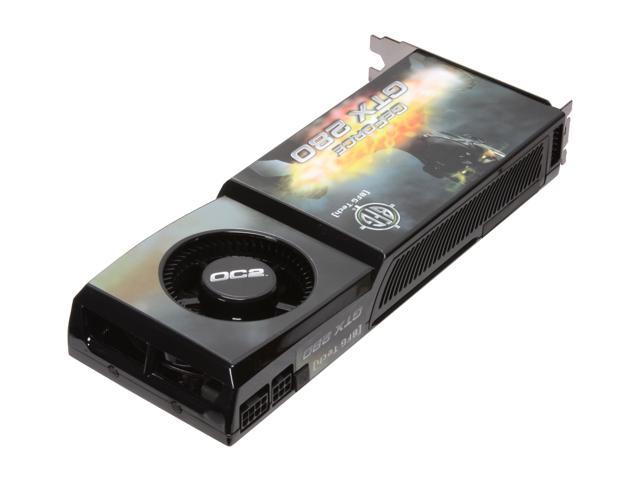 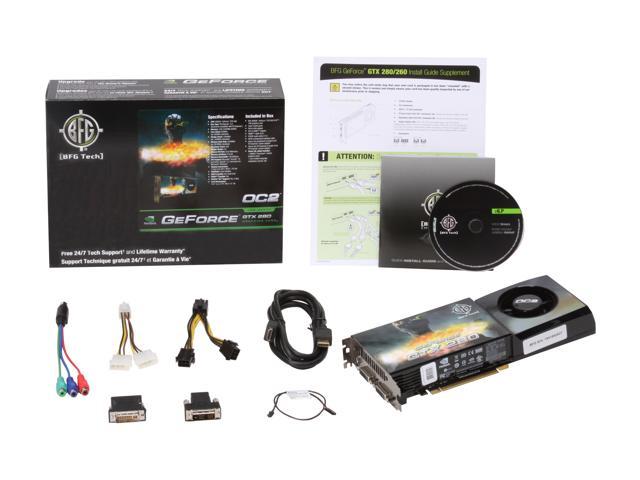 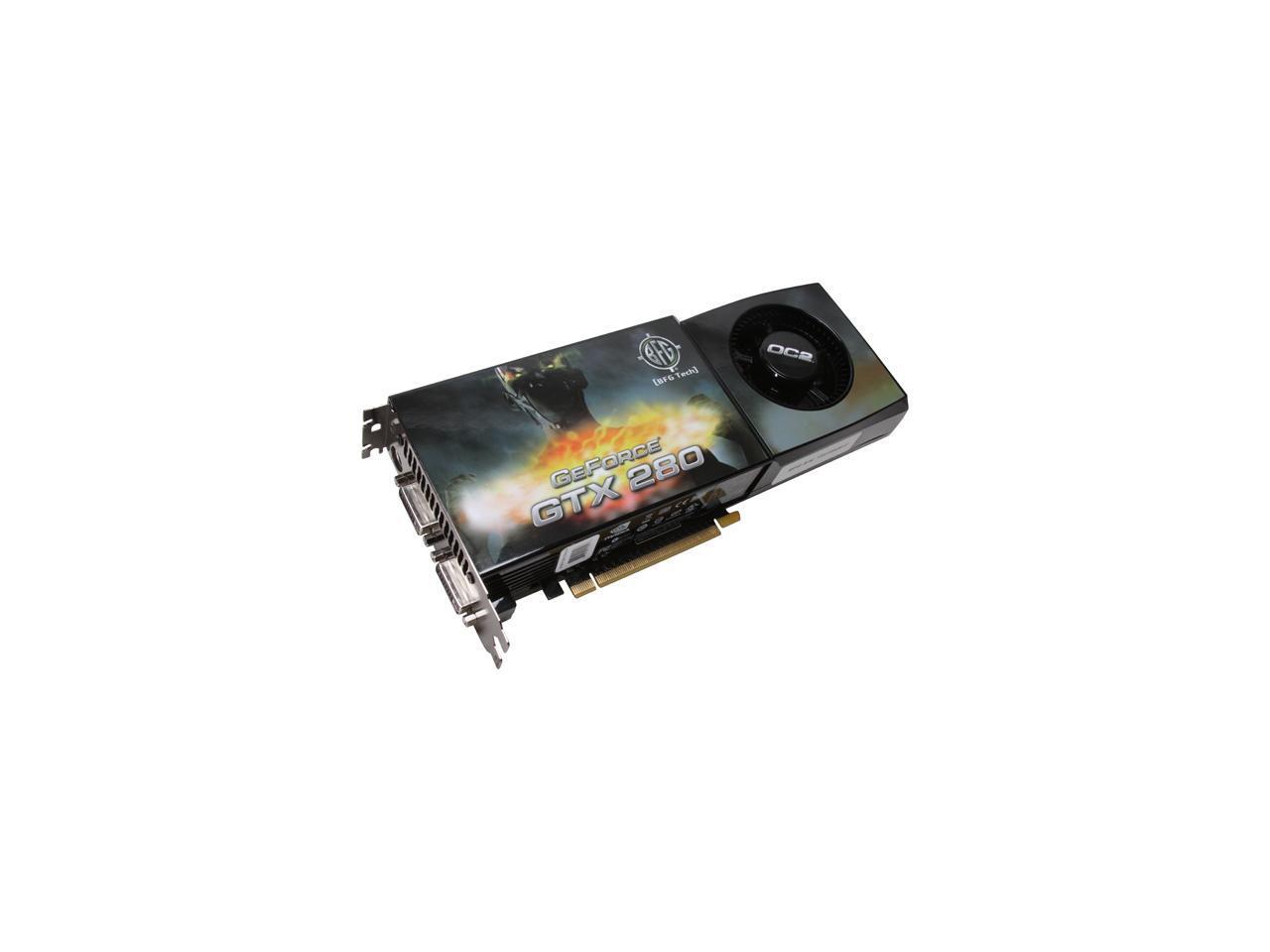 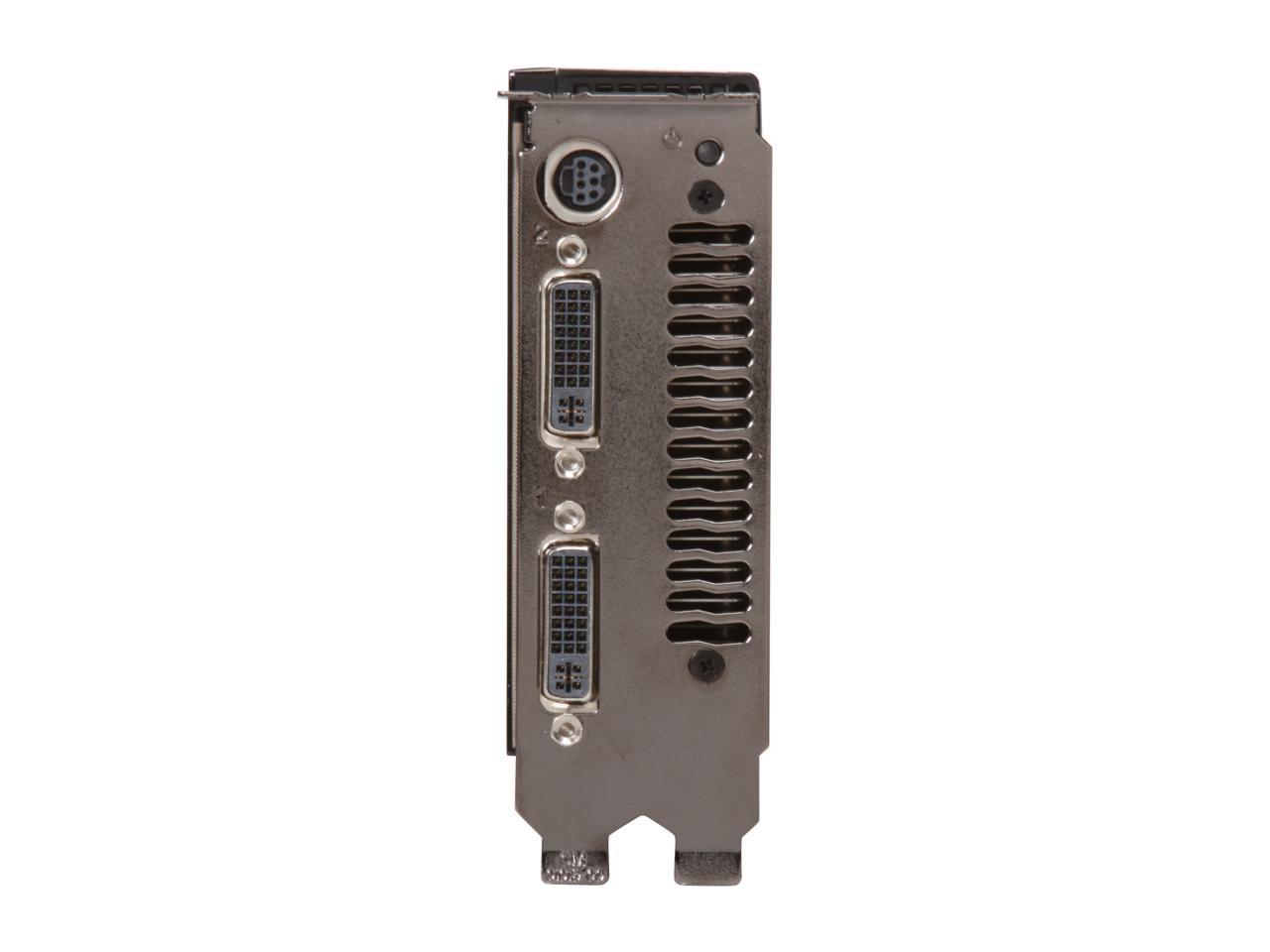 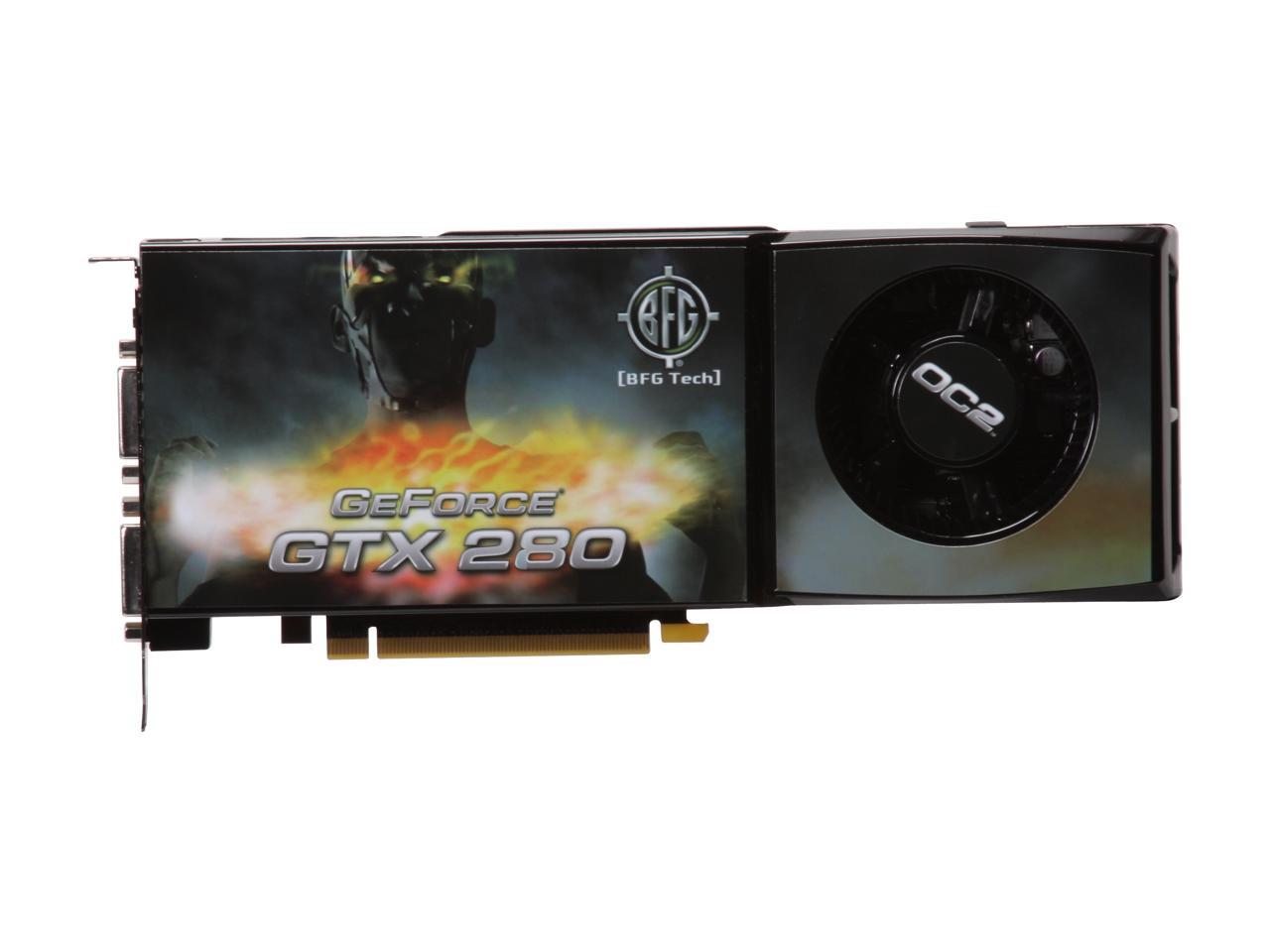 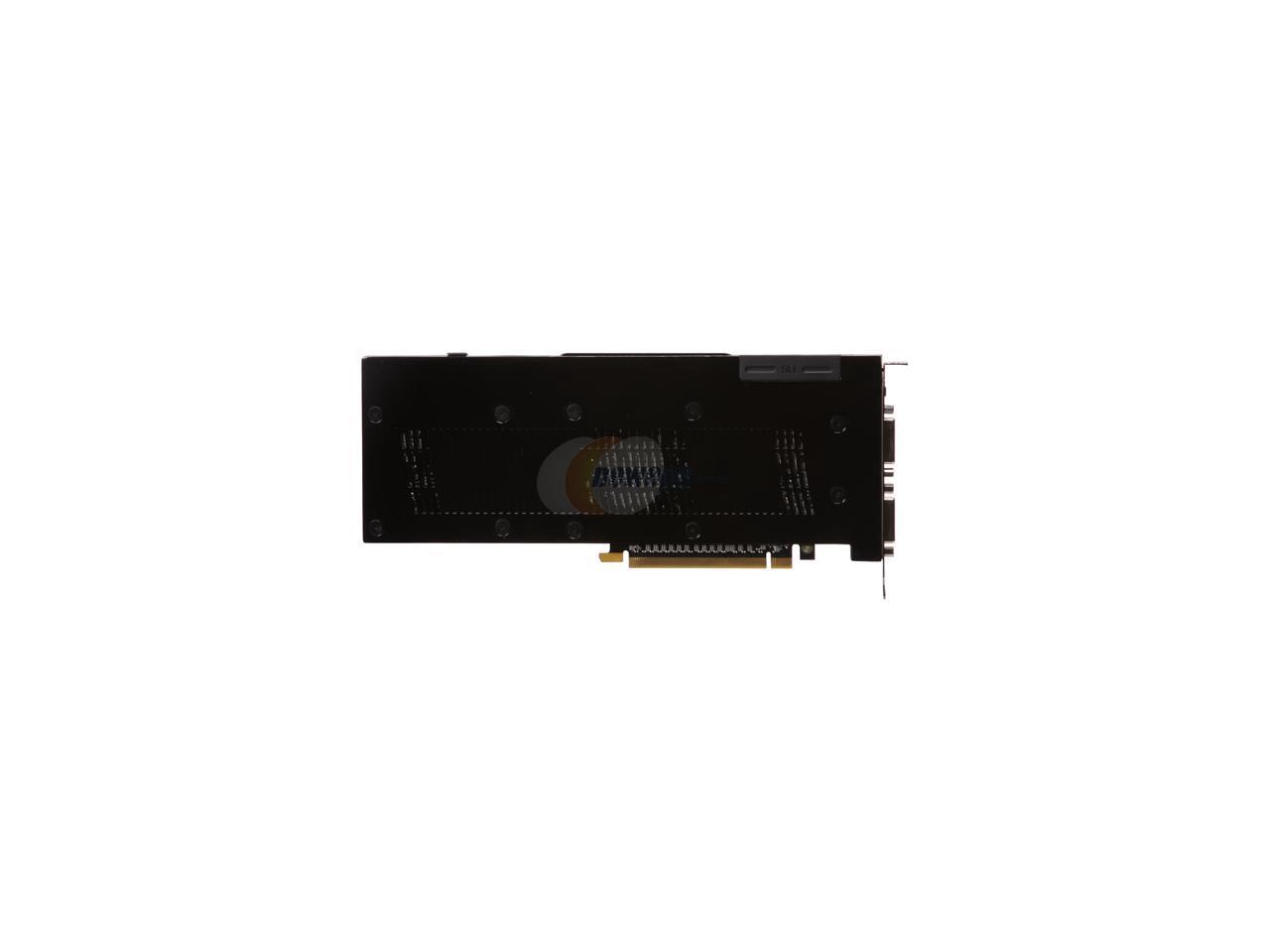 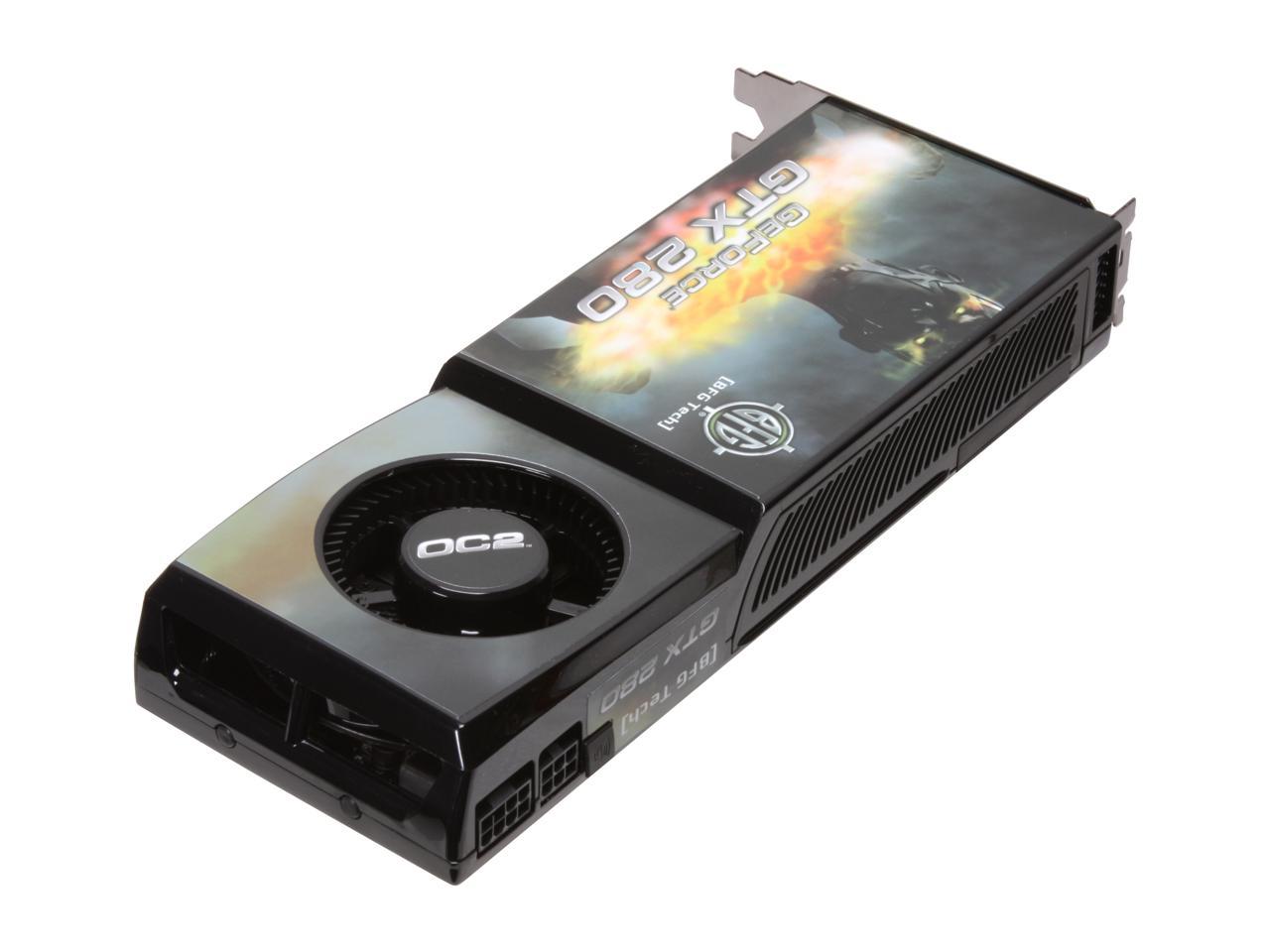 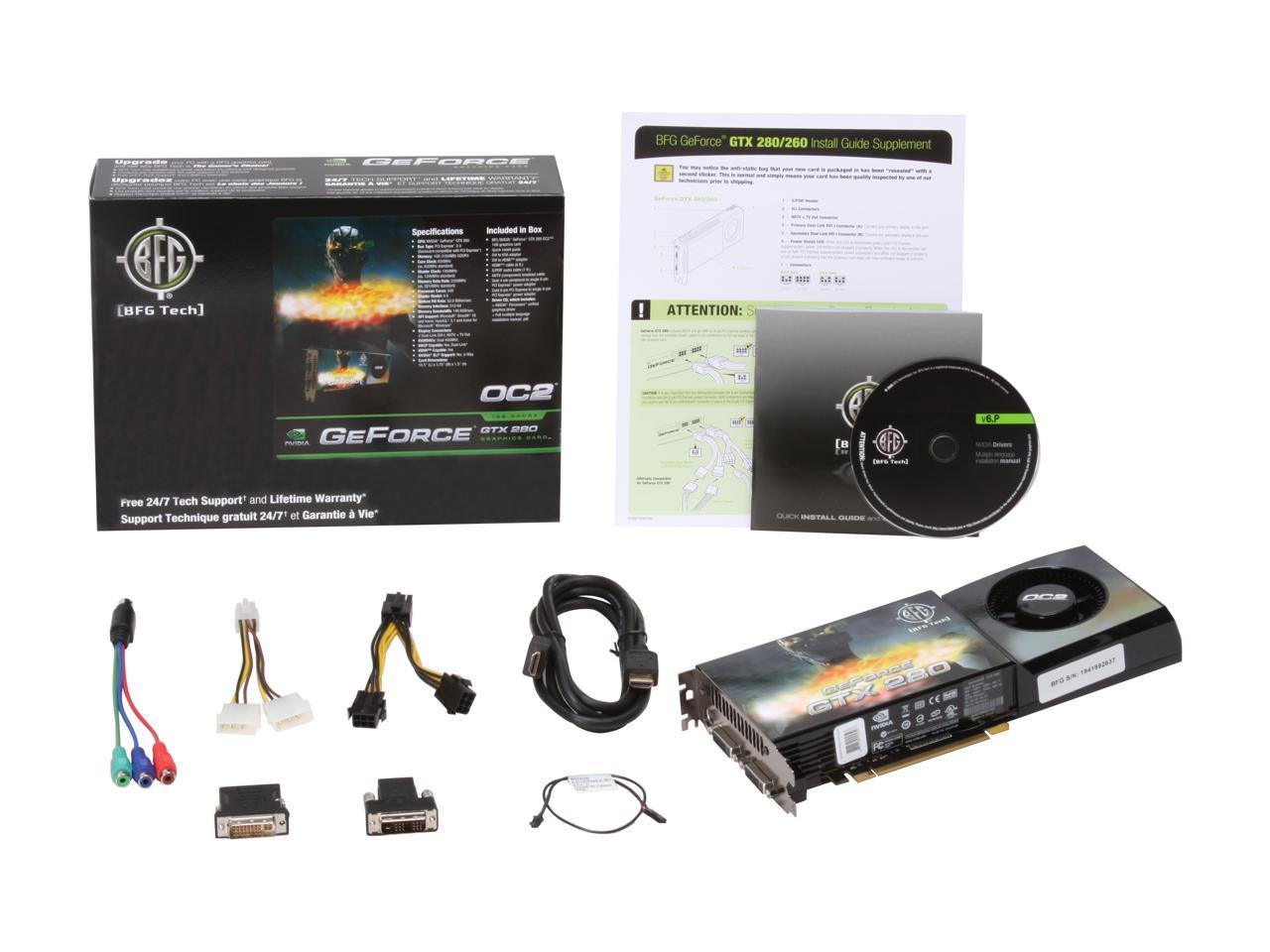 (60) Write a Review
OUT OF STOCK.
Overview
Specs
Reviews
NVIDIA's 200 series of graphics cards combines cutting edge technology and advanced capabilities for best-in-class performance. The GTX280 boasts a 2nd Generation NVIDIA Unified Architecture solution for all your most demanding graphic needs. It’s Microsoft Vista ready and equipped with a PCI-Express 2.0 interface. The GTX280 supports 3-way SLI to seriously crank your performance options by using up to three graphics cards for insane flow rates.
The card's core clock runs at 650MHz, relieving your CPU of pixel crunching duty. Data surges through the GTX280's 240 stream processors fed by 1GB of 512-bit 2326MHz GDDR3 memory. Twin dual-linked DVI and 400 MHz RAMDAC lets you display 2560 x 1600 resolution video and graphics on even the largest monitors. Support for DirectX 10, OpenGL 2.1, NVIDIA's PureVideoHD, CUDA and PhysX-ready are built in to render even the most intense environmental effects or HD DVD video with brilliant clarity.
The GTX280 delivers fluid frame rates and HD video with solid performance. If your motherboard can take it, the GTX280 can dish it out.

Cons: Both cards appear to be artifacting after less than 10 hours of use. No overclocking and good temps (sub 60 load). Will be RMAing shortly. Very disappointing, but can't wait for the replacements, still love the cards.

Overall Review: Why do people post reviews that are nothing of the sort? Don't submit a review unless you've used the product...seriously...

Pros: This is a monster card. I can run Crysis 1900 x 1200 with everything on 'very high' and get a good 30 fps, which in crysis is very good. It will run all games on highest settings with a smooth outcome. It's the best single card solution from nvidia so far, and is apparently great for SLI too. It has a higher bandwidth than the 9800 GX2 (thus makes gameplay a little smoother) and isnt AS power hungry.

Cons: This card is huge and heavy, but will fit in all mid-tower cases with lots of room. I haven't had any problems of it slipping out of the slot. It is also very hot but thats to be expected of a card of this calibre. When i run crysis it heats up to about 70 degrees C and when not running any games its about 50 C. If your airflow is pretty efficient it should be fine. Also, a big concern i had was it requires a lot of power. Im using a 700 w PSU which is more than enough but it doesnt have any 8 pin PCI connectors so i had to use the 2-6 pin to 8 pin adapter and the two molex to 6 pin adapter. This item DOES come with both of those adapters, but just make sure your PSU has any of those.

Pros: OK, since they dropped the price this is the video card to own. You can read all the reviews you want about frame rates and power consumption but, until you power it up and run your games you won’t know what it really is like. It is a beast! Plain and simple, went from an 8800GTS 640mb and that was a great card itself hours of good play. There is only one game to really test it on and that is Crisis, runs it without an issue. Everything on very high on a 22inch monitor with 2XAA on; and not one hiccup even in high fight action cuts.

Pros: Don't believe any negative comments about this card. I ordered 2 of them and run them in SLI. I have thrown everything at it cranked up all the way (Crysis Warhead, Total War II, Supreme commander, etc) and have never had a problem except what is listed in the cons section and the reason for the 4 and not the 5.

Cons: I knew these cards would run hot, but the cards did not regulate how fast their fans would go. They would sit fairly idle and would lock up my computer. I ended up loading Nvida System Tools to crank the fans up while I was playing games, and they did not miss a step. As far as I could tell there was no documentation on this (not that I needed it, but it would have been nice) so I had to find out the hard way.

Pros: What can I say, it's the fastest card on the market right now. I haven't found a game yet that this card can't breeze through at 1920x1200 resolution with all settings maxed.

Cons: This is the biggest card I've ever seen. My 8800 GTS card fit into my case without any problems, but this card just barely squeezed into an Antec 900 case. Needs both an 8-pin and 6-pin power connector.

Overall Review: Nvidia's beta drivers caused my computer to crash until I uninstalled them. So despite what some people have said here, you may not want to use the beta drivers.

Pros: this card is fast, destroys every game i throw at it! it chews them up and regurgitates them in spectacular glory through my screen to my eyes! oh the shaders! they oc'ed it to save me the trouble! got me a free game with it! (farcry2 its terrible, graphics are nice, but i drive around back and fourth all day its boring) oh did i tell you it came with adapter cables?!!! shoot i wouldnt have been able to power this baby without those, on those came in handy... dude it even comes with a hdmi sound cable to attach to your mobo! dude it even comes with a dvi to hdmi adapter! how cool is that

Cons: its big, bigger than my head, not as big as my foot, might not fit in you cases but fits perfectly fine in my full tower, funky cover art, not really a con but im warning you now, i hide mine away behind a hunk of steel thats my door

Overall Review: this thing is nuthing but great, sure it takes up most of my case and 2 slots but its worth it, shoot it even has its own exhaust! buy it, the only thing that i had a problem running at max with this card was the nvida testing thingy with the rolling ball, how odd

Pros: This card is awesome, especially upgrading from my 7950GT (<<still a great card)! After installing this I ran Crysis on ALL Very High settings and the cards potential wasn't even being fully utilized! The only thing that bottle-necked this game was my Athlon X2 5000+. Running on Very High the graphics looked REAL and ran very smoothly with the occasional loading pause and physics overload to my processor (Both cores running at 99%).

Cons: The rebate system is truly a scam, don't expect to get your money back! Even if you meet every requirement for the rebate they will send you a very nice letter "Apologizing" for the rejection of your rebate....how nice :). This card runs in the 60C+ temps under near full load even in a well ventilated case but this doesn't seem to have any affect on the graphics quality or processing speed.

Overall Review: I don't know how well NVidia's new PhysX software works with their GPU's but I'm pretty sure no load was taken off of my poor CPU when playing PhysX enabled games :(. Also, in Adobe's most recent Photoshop (CS4), they have enabled GPU acceleration for the rendering of pictures when scaling, moving, rotating etc.. It seems that CS4 really doesn't the GTX280's very efficiently, making this the slowest version of Photoshop....ever. If you are experiencing these problems, don't blame it on your nice new GTX 280 because it's all Adobe's fault :D! This is a great price for a beast of a GPU, I would highly suggest it! Also, make sure the card fits in your case BEFORE ordering, it is approximately 10.5 inches long and requires a 6-pin AND 8-pin power adapter, but don't fret! Included with this card is a 6-pin and 8-pin adapter! If you cant find all of the plugins for these in your PC, I can almost guarantee that your PSU will not be able to handle this card.

Pros: Life time warranty can't go wrong with that. Bring all supply needed to get this baby ready. Fan on the card runs veiry quiet.

Cons: Did have little problem with the HDMI, my monitor keep turnning off on some reboot on HDMI connection. Switch over to DVI problem solve. Also had problem with the lates driver update from Nvidia I had to rolled back to the original drivers on the disc. beside that nothing else.

Overall Review: This card is huge so if you a have small board consider a smaller card. Also you have to connect both 6 and 8 pin power cord, good thing it include the 3 way adpater for those who have only 6 pin connector.