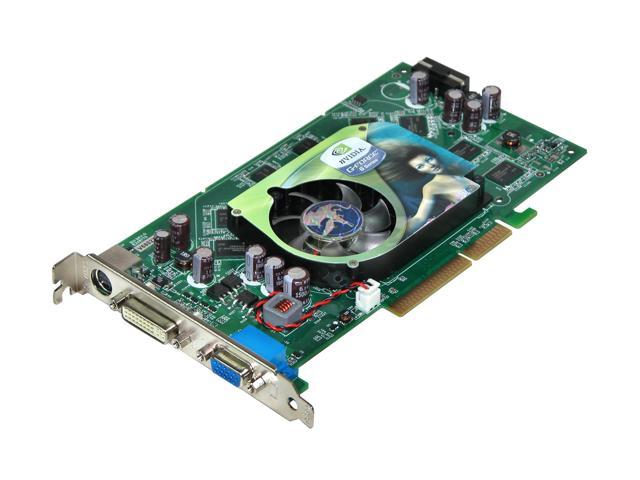 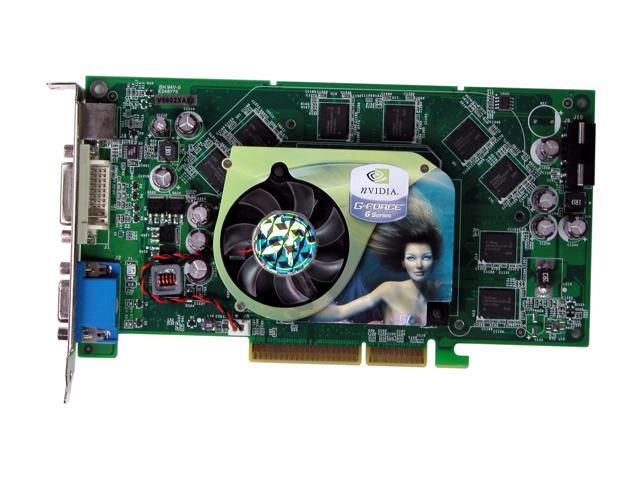 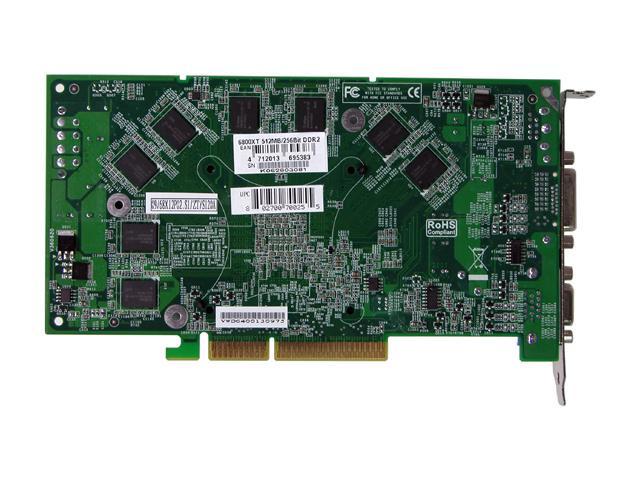 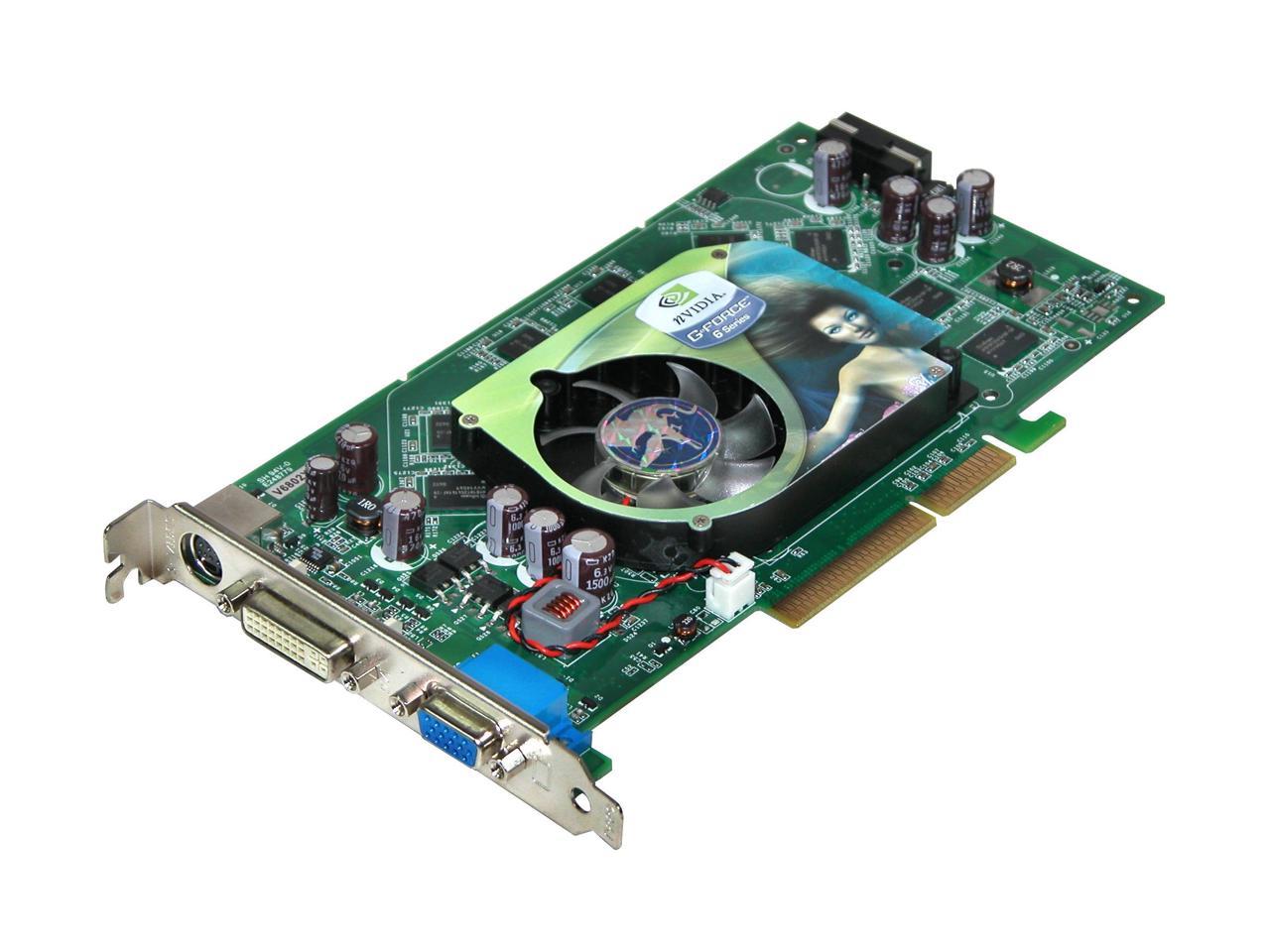 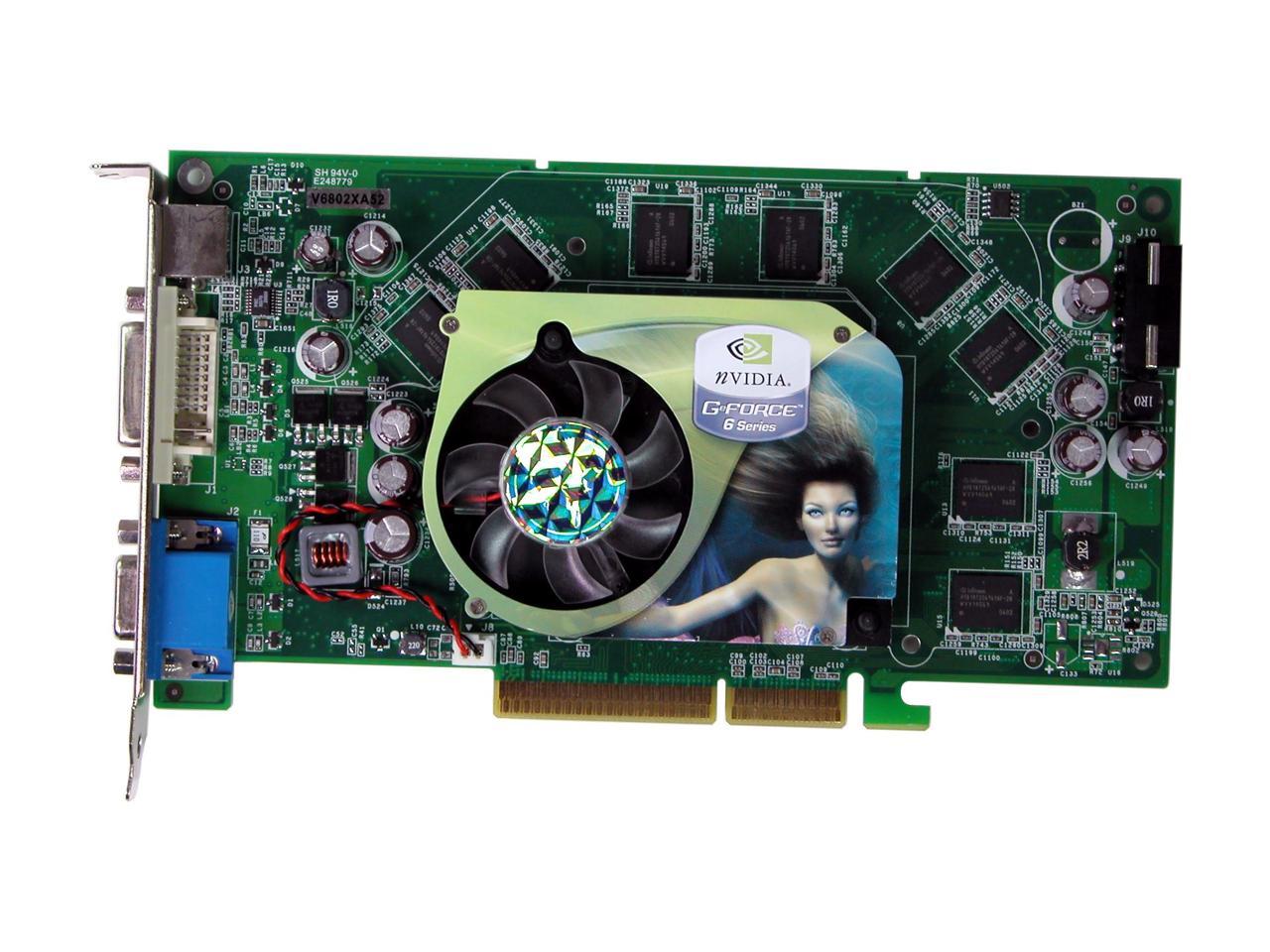 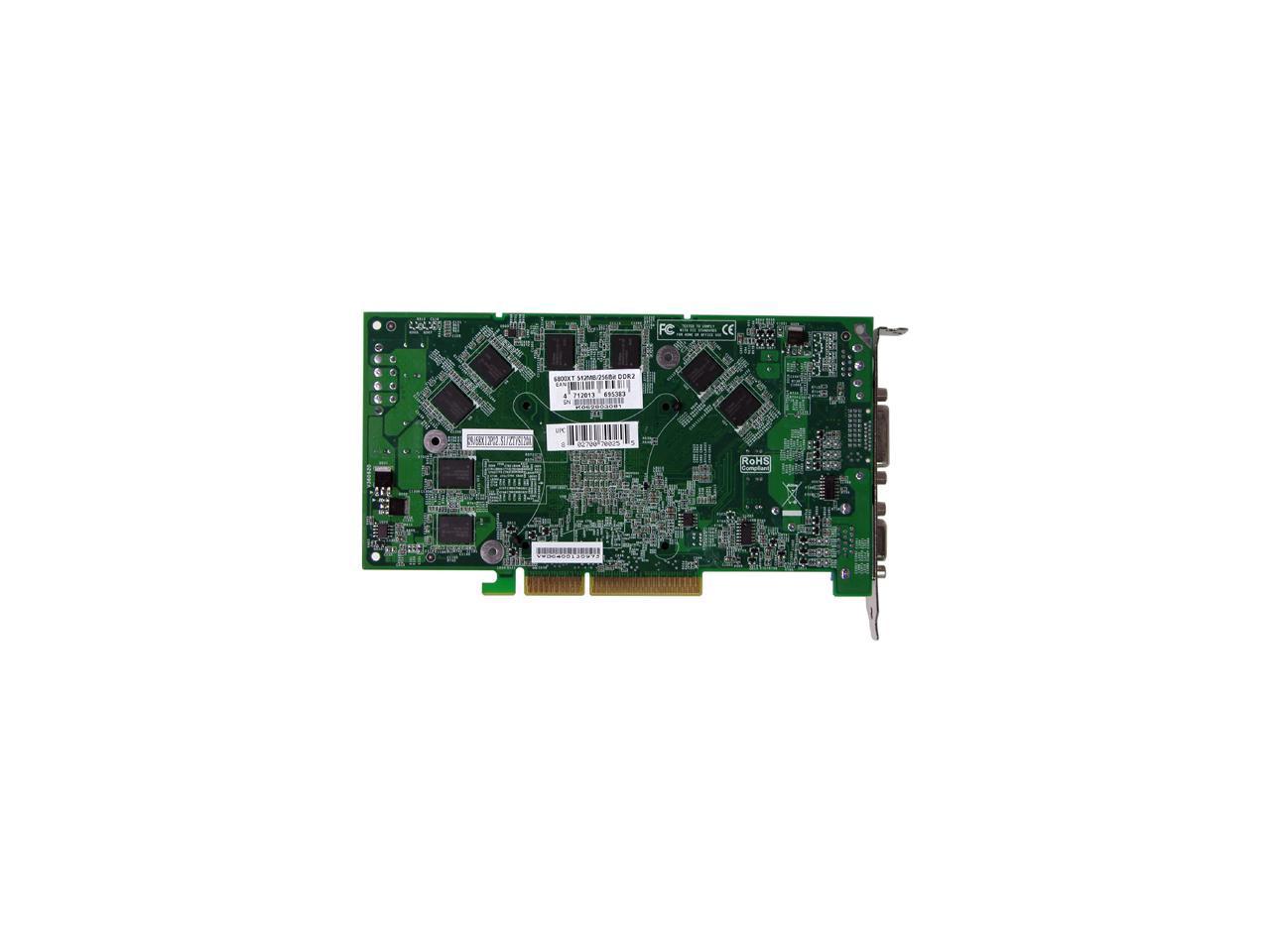 Learn more about the Biostar V6802XA52

Pros: The card functions as advertised. No complaints for this "fast enough" AGP card. I haven't had any problems with a little over-clocking, so I can't comment on the goodness or badness of the fan. It does what it does to my satisfaction.

Cons: Biostar has a history of not paying their rebates. A third-party fulfillment company stonewalls any requests for information, saying..."When we get paid, you'll get paid." It's December 13, 2006. I sent the rebate info in before the end of July 2006. Phone conversations with staff at Biostar are rife with excuses and promises, but nothing happens. At this time I'm well-convinced that I will never see a check for my rebate. I advise that you avoid purchasing products from this company if you are considering them on the basis of their rebate.

Pros: Excellent value for the money! 512MB of DDR2 RAM running on a 256-bit interface, and the potential to unlock 8 extra pixel pipes and 2 extra vertex pipes... I, myself, was able to unlock 4 pixel pipes (the other four were defective) and the two vertex pipes for a total of 12 pixel pipes and 6 vertex pipes, and overclocked the core to 345 MHz and the memory to 811 Mhz, and it runs at a cool 48c on load! Mind you, this is with an aftermarket Zalman cooler, so keep that in mind when considering a purchase. Can run almost any game at maximum settings, and even with AA and AF enabled. Incredible value for the money.

Cons: Stock cooler is merely adequate. As I said, I strongly suggest getting an aftermarket cooler for this card, especially for overclocking. The clock speeds are lower than my old 6600GT's, but the memory and the extra pipes more than make up for that loss.

Overall Review: UPS shipping sure took their time... Ordered on Thursday, recieved the card on Tuesday (with 2-day shipping)! Not impressed. This has nothing to do with Neweegg, however - processing was extremely fast, finished only a few hours after I placed the order!

Pros: Wow. Wonderful step-up from a 9500PRO. BF2, America's Army. Wonderful new life has been breathed into my P4 system. I would give this card a 5 if it were PCI-e. For an AGP card, this is the best I can find!

Cons: Stock cooler is inadequete at best. I run all my settings on medium, and I have to unlock the xtra Pipelines. Won't do it until I get a watercooling solution.

Overall Review: Great card, just make sure you invest in an aftermarket cooling solution if you want to overclock, unlock, or otherwise step up it's performance. Google search -The Best Case Scenario- for ideas and tips on how to install aftermarket cooling or configure these cards safely.

Pros: Fast for not a lot of $. Tried Riva Tuner, most of the disabled stuff was pure junk and properly disabled at the factory on this chip? Unlucky? Maybe so, but unless you like artifacts . . . Upgraded my power supply before I installed it so I am confident of my power. It did overclock a little with Biostar VGA overclock utility.

Cons: I read the reviews and because they say the card runs hot I replaced the heat sink with EVERCOOL EC-VC-RHC Ever Lubricate VGA Cooler - Retail Item #: N82E16835119064 (that worked great) After I had it like 1 day less than a year if you consider the shipping time, the card went completely belly up. Since I could not locate the factory fan setup Biostar refused to honor my warranty and I had to pay them $3X for out of warranty repair. That make 2 out of 3 biostar parts I have bought that have died (bought 2 mother boards and one died at about 7 months: dead stock setup and never touched after proper anti-static install 7 months prior) So for my money I will go with a vendor that honors their warranty and does not need it in the first place.

Overall Review: Biostar claimed larger heat sinks cause flexing and breaks the internal traces on the boards? Is that likely? I do not know, but I do know I bought an XFX board at the same time and it had a MUCH better cooling system stock and is still running fine. Maybe the real problem here is Biostar cheaped out on the heatsink/fan. In any event, they have lost a customer and gained yet another negative feedback on this card.

Pros: This card works fine for a couple of months.

Cons: The first card we received died after about three months, taking the power supply with it. The culprit was a vented capacitor. Newegg kindly and efficiently replaced the video card. We replaced the power supply with a top notch Fortron unit and the second card lasted two months. The culprit was, again, a vented capacitor. While I do not doubt that Biostar was just using a bad batch of caps, we do not have the time to keep replacing this card, occasionally blowing up other parts of the computer. Thus, we are out the money and will replace it with a card that has better reviews.

Overall Review: We got this card on our IT departments recommendation so that we could go up to two monitors. The IT people no longer recommend it. Other Newegg reviewers seem to have had similar problems. Buy it at your own risk.

Pros: Inexpensive card that works as a decent replacement in a pinch if you have an AGP system that still has some life in it.

Cons: Stock cooler is weak beyond words. Make sure you factor in the cost of a cooler when pricing. I got a Zalman cooler to put on it and it still ran hotter than it should have and died within 9 months even though I didn't overclock it. Even with latest drivers there were artifact issues and framerates were not the leap I expected upgrading from a radeon 9700.

Overall Review: There is no reason to buy this card when you can get something like an x1650xt for about $20 more after rebate.

Pros: Technically, a lot of bang for the buck. Looks great on paper. Once you install build 91+ drivers from Nvidia, the card cruises like a bat out of you know where, but the drivers that came with the card are next to useless.

Cons: Doesn't deliver the promise of it's potential.Runs HOT-89 C at idle, 109 C under load (Aquamark 3D, Battlefront, Doom3, Madden 06). Definitely requires a hefty power supply, the 300W supply in my son's case kept shutting down under load-swapped out my own 600W from my pc and it was fine, but now I need a new ps for mine since I have two of these cards-one for myself and one for my son's pc.

Overall Review: I recommend aftermarket cooling options for this card-it rocks if you can keep it cool. I've got 7 fans in our full tower cases, and this card still runs hot. A little disappointed that the 512 mb of memory made little difference in performance, my almost 2 year old first generation 6800 GT w/256mb still out performs this card, but still has the same heat issues (actually it runs a LOT hotter than this version, so I'm not all that disappointed in the new card). If I had to do this again, I'd buy an ATI card-lower power requirements, less heat, par performance with the 6800, but I've been a loyal nvidia fan that it's hard to switch sometimes :-)