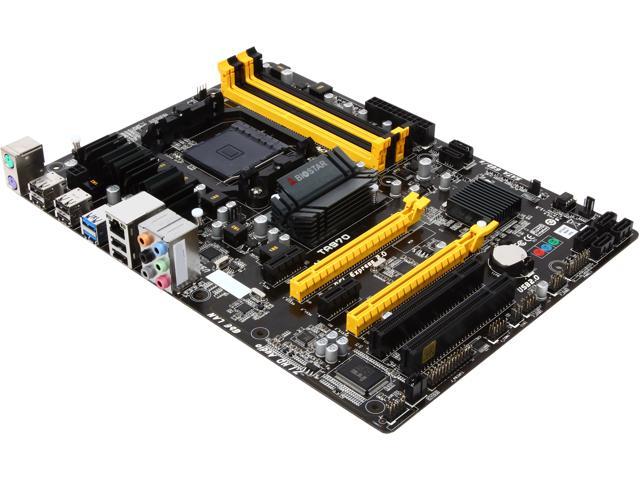 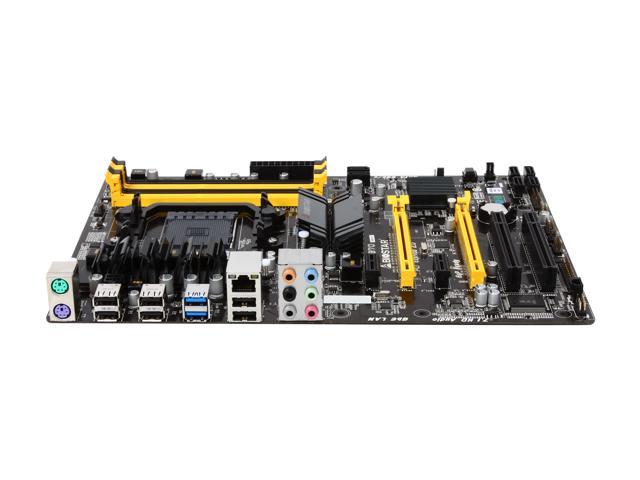 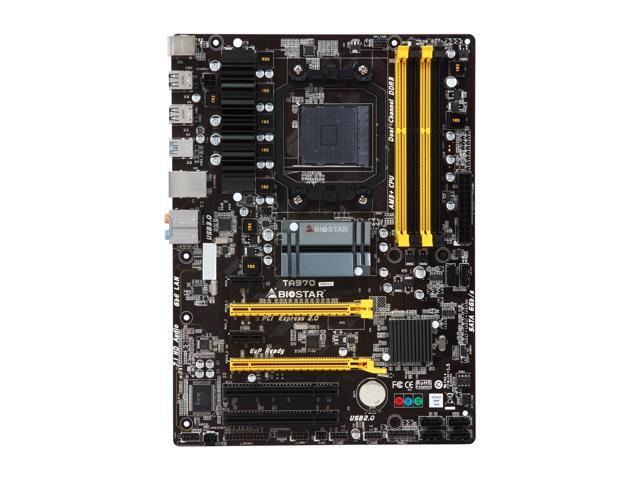 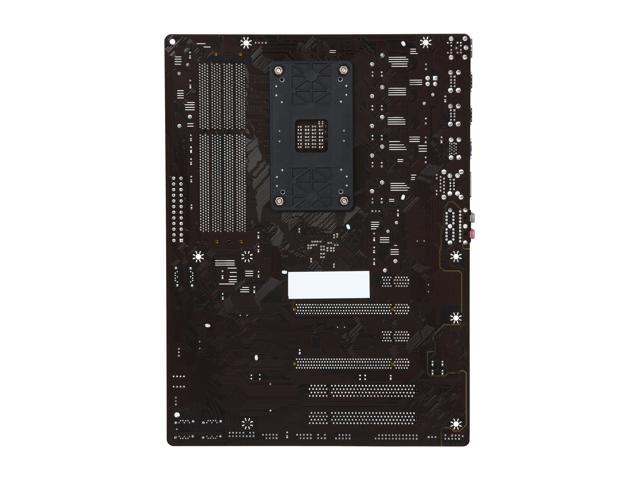 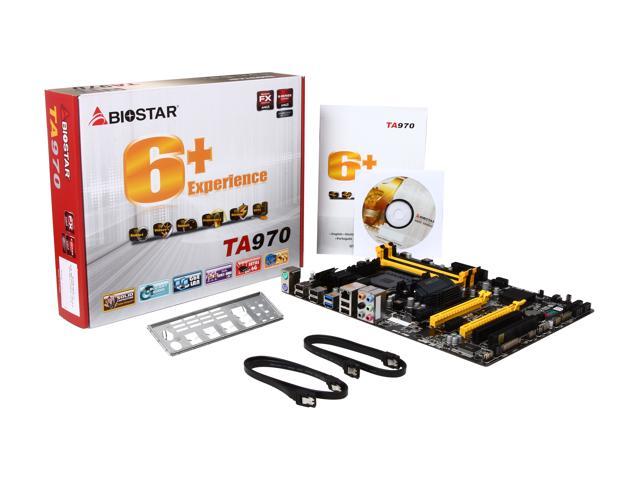 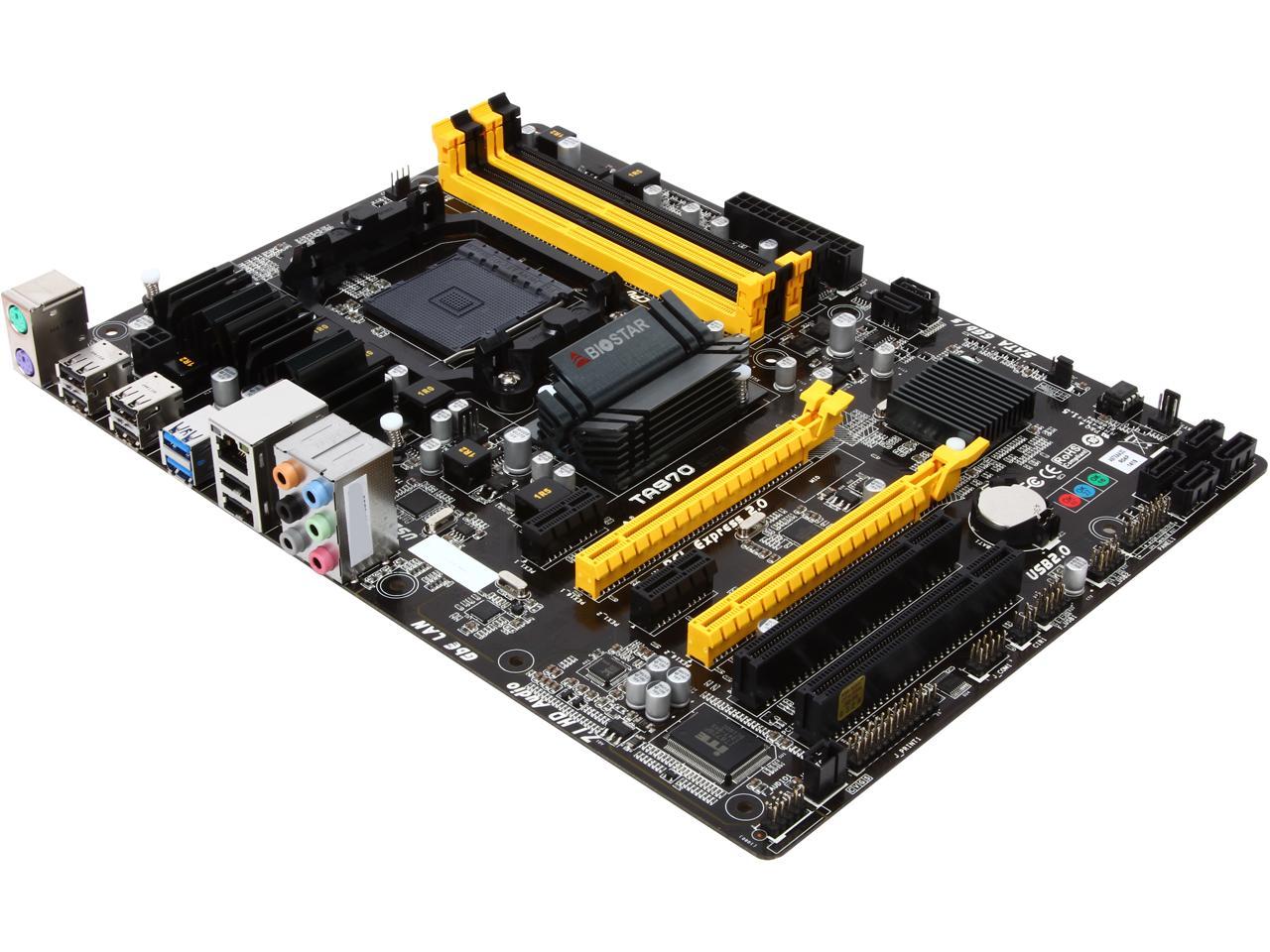 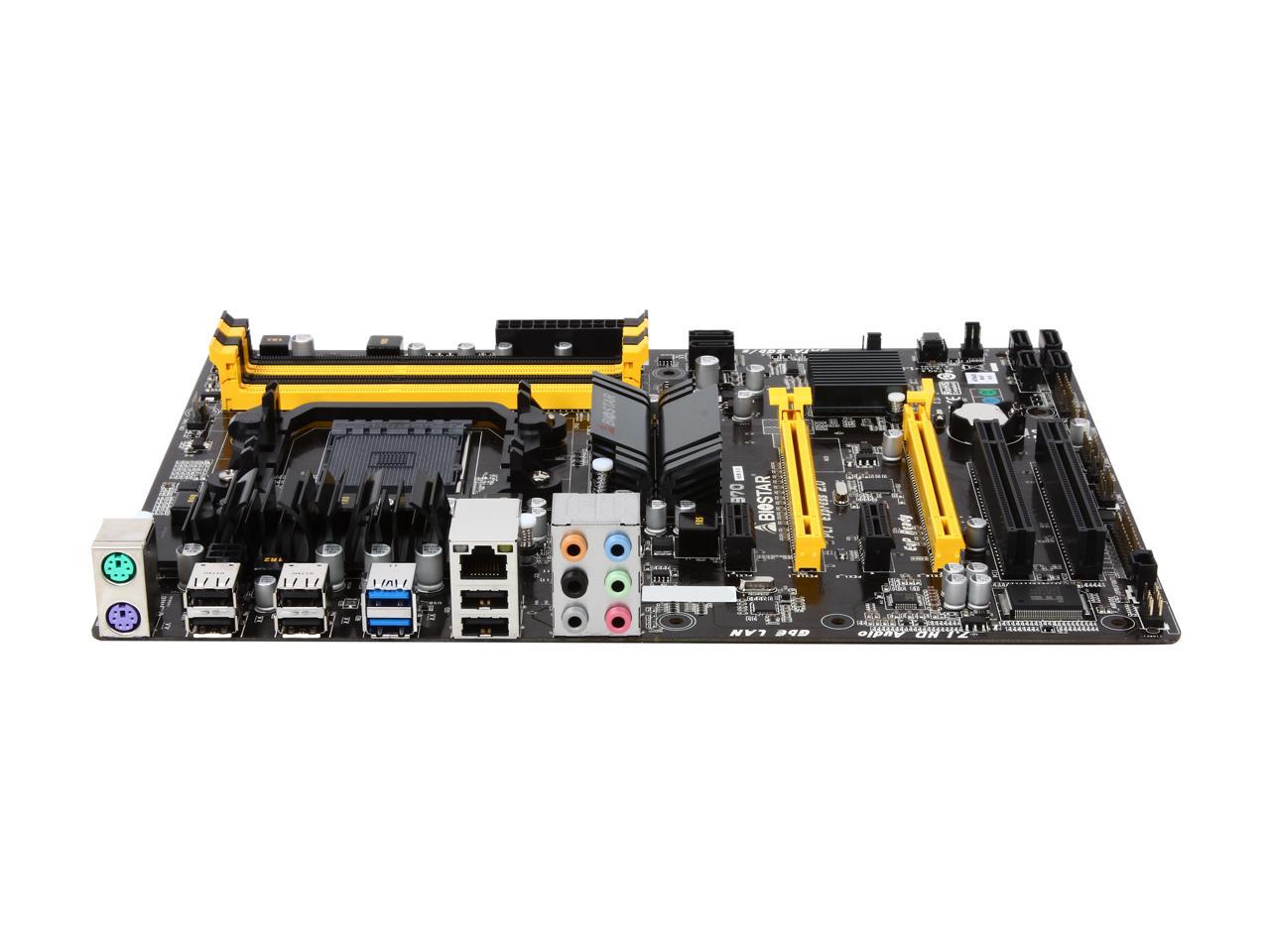 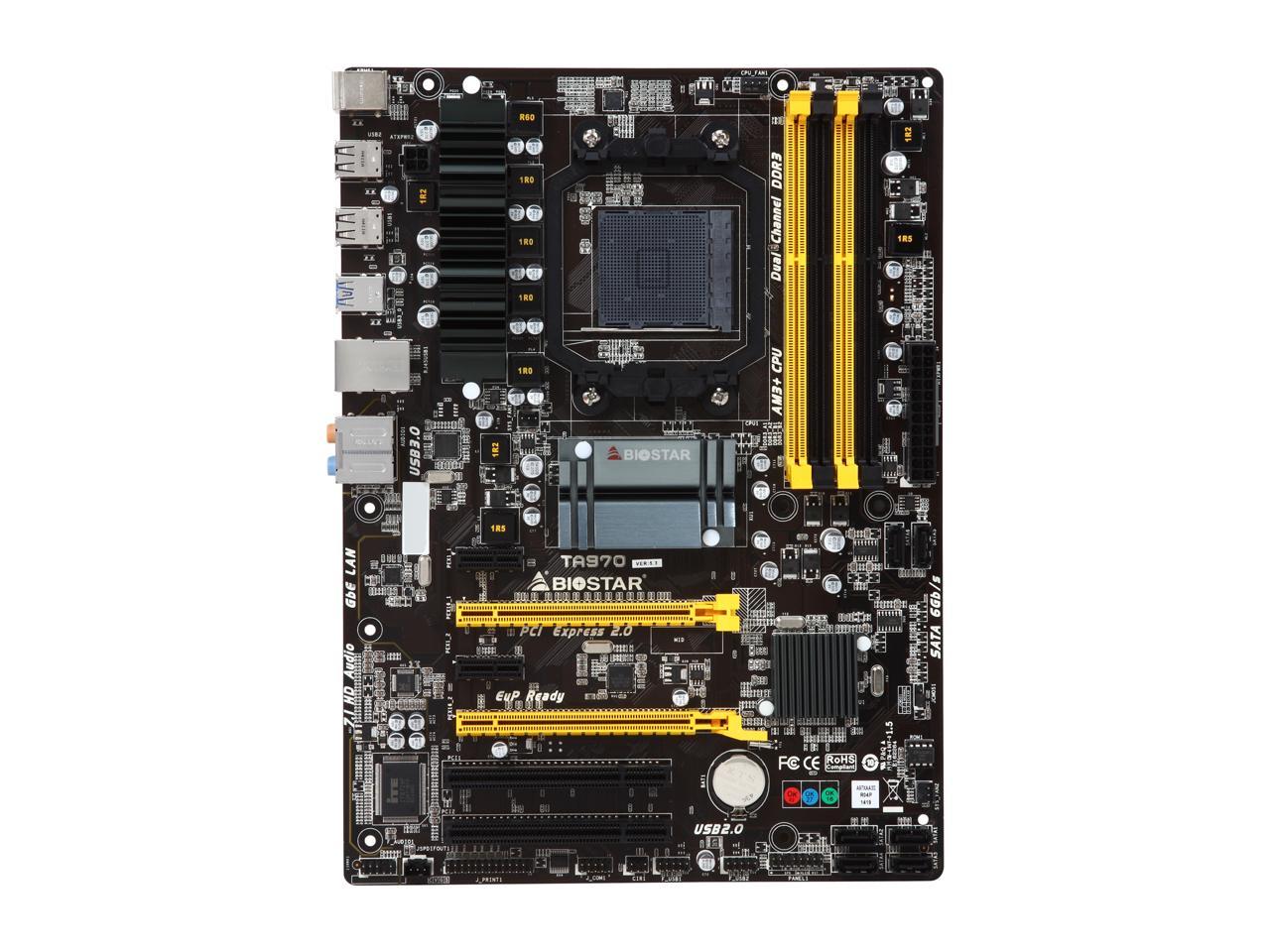 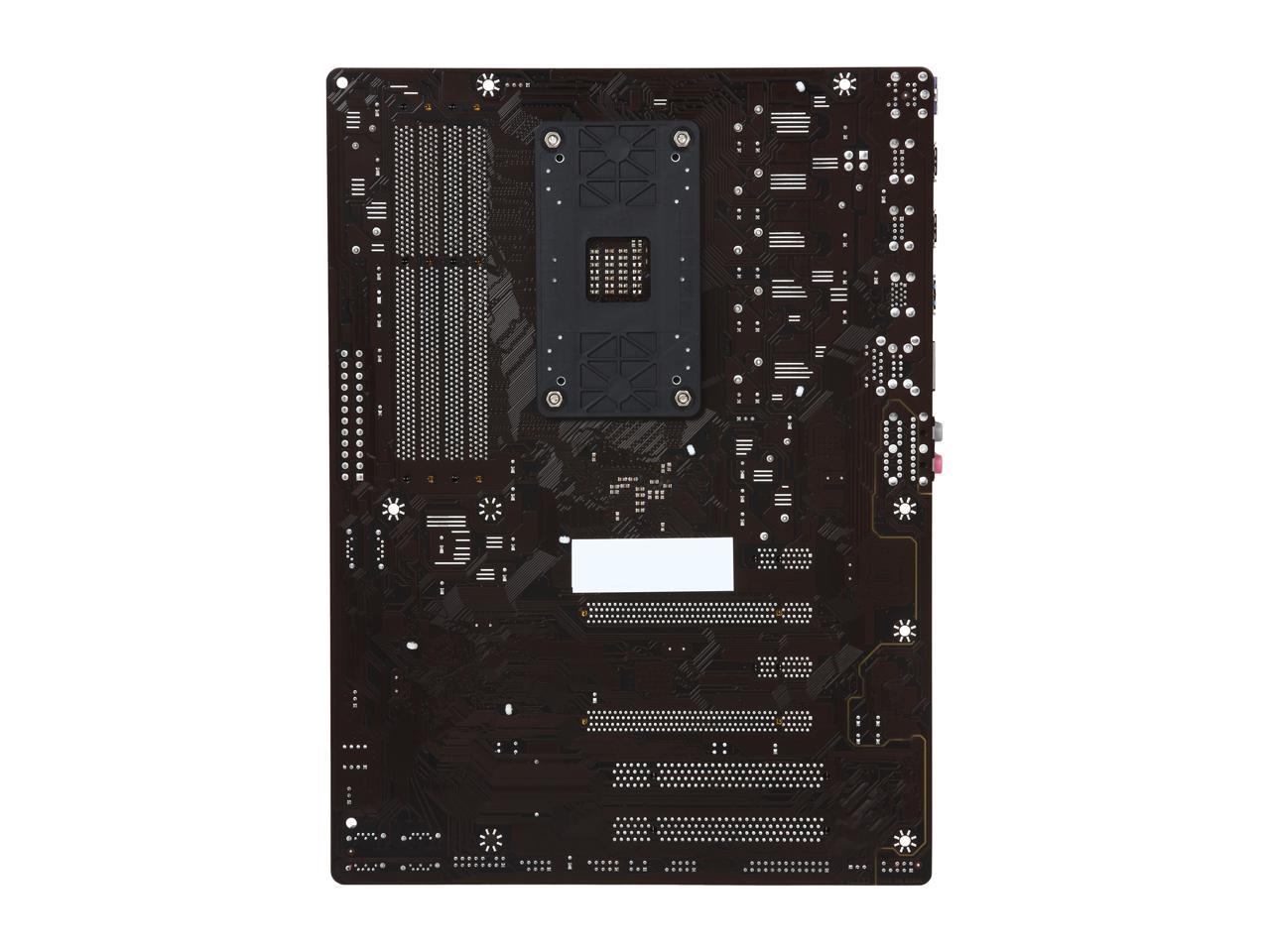 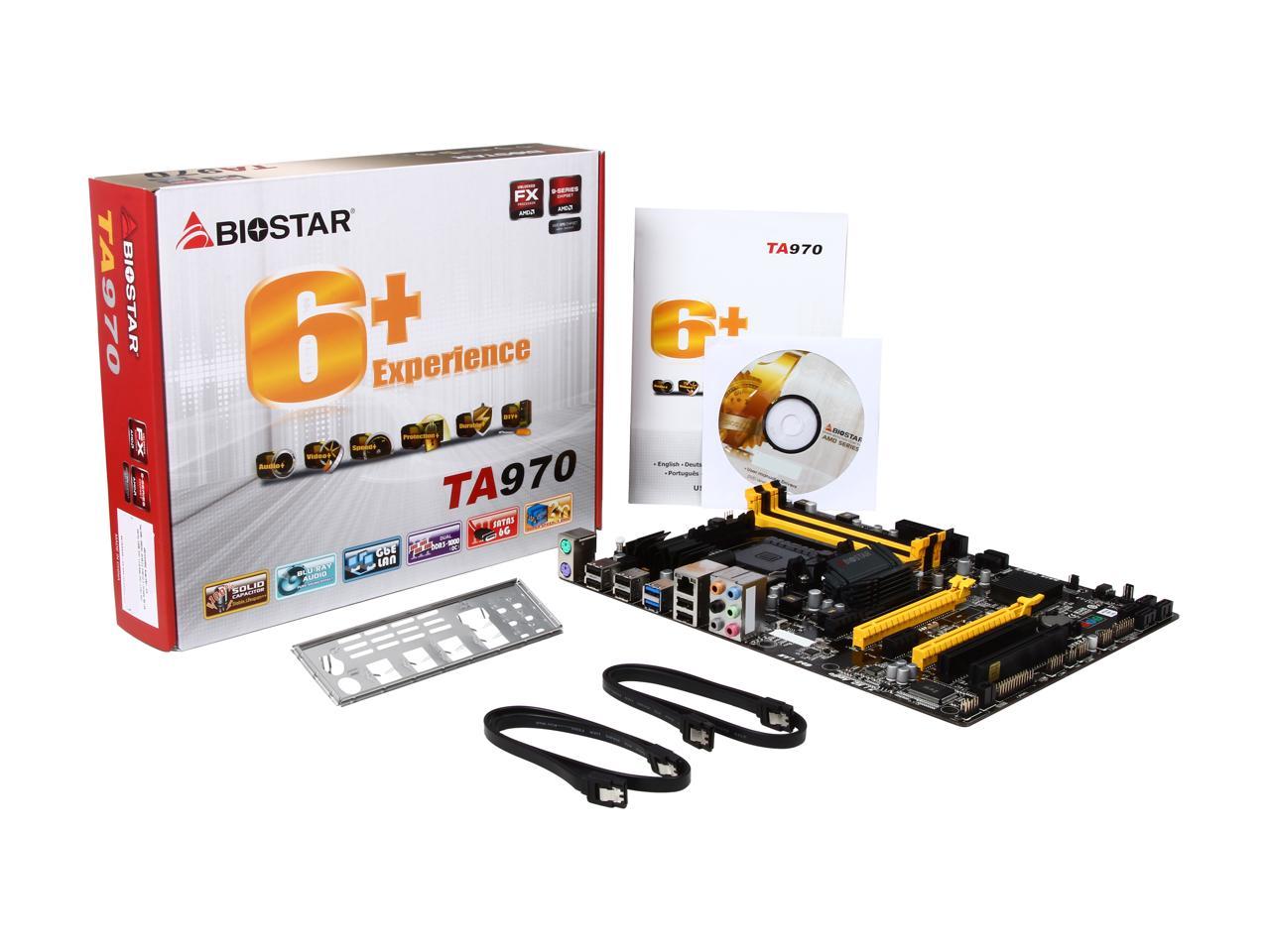 (486) Write a Review
See more "am3 motherboard"
In stock.
Ships from China.
Most customers receive within 4-22 days.
Overview
Specs
Reviews

The BIOSTAR TA970 motherboard is a great choice for those wanting to build a powerful yet budget-friendly AM3+ processor based system. It's powered by AMD 970 Chipset, and supports Socket AM3+ AMD FX/ Phenom II/ Athlon II processor. The latest USB 3.0 and SATA III allow you to transfer and retrieve data at blistering speed. With CrossFire X, you can scale the graphics performance by incorporating two VGA cards into a single system.

Performance is just part of the story. The Blu-ray audio redefines your listening experience on a PC. This board is designed to be a tough guy, with moisture-proof PCB, ESD Protection and OC / OV / OH Protection circuit. Five-phase power design and 100% solid caps take stability and overclocking potential to the next level. An array of user-friendly software is provided, to streamline and optimize your everyday use. Moistureproof PCB
The popularity of PC usage and working environment is getting deteriorating and moist (rural, coastal, etc.). The PCB will be oxidizing easily by damp or absorbed moisture, and ionic migration or CAF (Conductive Anodic Filament) will be generated. Moisture-proof PCB meets high density and high reliability requirements for moisture proof.

5 Phase Power Phase Design
5-phase VRM design with high quality power components such as low RDS (on) Mosfet for lower temperature has the advantage to raise the overclocking ability.

100% Solid Caps
With armor-plated Biostar Technology, all capacitors are placed with 100% solid capacitors that have a lasting life cycle, durability and stability for crucial components.

ESD Protection
ESD (Electrostatic Discharge) is the major factor to destroy PC by electrical overstress (EOS) condition, ESD occurred by PC users when touch any devices connect to PC, which may result in damage to motherboard or parts. ESD protection is designed to protect the motherboard and equipment from damage by EOS.

BIOS Virus Protection
When enabled, the BIOS will protect the boot sector and partition table by halting the system and flashing a warning message whether there's an attempt to write to these areas.

SmartSpeedLAN
SmartSpeedLAN is a free software application which monitors and manages your PC's network behavior. With user-friendly GUI, it allows you to select and prioritize different types of network traffic, including gaming, media streaming, communications or web surfing. You can also set any specific applications, choosing to prioritize or block accordingly. SmartSpeedLAN can feature automatic management options that use adaptive networking intelligence to ensure that you are getting the best online experience possible.

Charger Booster
Charger booster is the best and efficient charger solution for Apple devices such as iPad, iPhone. Basically, Charger booster Technology is able to boost the charging time to be more efficiency and faster once any Apple goods connecting to the Motherboard. With charger booster technology, you are able to charge your Apple devices up to 42 % faster.

Blu-ray Audio
Upgrading your Audio performance in the easiest way is choosing BIOSTAR ultimate Motherboard. It does support Blu-ray audio DRM (compatible driver/software) and provide the higher audio output of 24 bit/ 192KHz than the 16 bit/ 48KHz from the normal MB. You will experience the high quality sound effect with pure Blu-Ray Audio.

BIO-Flasher
BIO-Flasher is a convenient BIOS update tool. Just launch this tool and put the BIOS on USB pen driver before entering the OS. You can update your BIOS with only a few clicks without preparing an additional floppy disk or other complicated flash utility.

Pros: Good Price and Feature Set for current generation AMD CPUs. Windows 8 boot from SSD in 5 seconds or so. Awesome.

Cons: Some "got yas" on the setup. Make sure the memory is in the red slots (A2 and B2) and make sure you've got at least one system fan plugged in. Bios starts in a very 'default mode'. Make sure you configure all the SATA and memory settings to your preference to get the best performance.

Overall Review: I built (3) of these for a client and all booted on first try and have run flawlessly. I'm just chiming in because this is a great Bang for Your Buck board. Just follow the instructions above, and in all the other reviewer's notes and you'll be golden.

Pros: $65 for a 970 Northbridge around 4/2013. Bios settings are large, bios update was easy All six SATA III. Motherboard runs cool. CPU was super easy to install. The RAID boots really really fast. The whole bios boot loads very fast (this is the part of a computer bootup that precedes the OS bootup).

Cons: I got lucky and saw the bios reset pin and fallen out. I replaced it and didn't think anything of it. Apparently from the other reviews, this will prevent your motherboard from posting. It falls out very easily and is buried under the GPU and close to the SATA connections. Icky for over clockers in need of a reset. There are only 2 3.0 USB. They are NOT NOT NOT where they are advertised to be (next to the LAN), they are right next to it. They are the ones with the blue internals. But that's not the worst part. The worst part is that the connections are only external on the back side of the motherboard. Oh, if you download the driver file for USB 3.0, rename it to .zip; then unzip it to extract the .exe file. That wasted 1/2 hour of my life figuring out. The SATA connections face each other so forget using elbows. This is problematic with my long GPU card.

Overall Review: The bios update is for all versions of motherboards, which doesn't seem to be an issue even though I think I have a slightly older version. To pair off your memory, remember to space them apart like the motherboard booklet says. Leave HPC off, that is for turning off half the cores so you can over clock the ones that are left for gaming. Up to you ultimately, if you feel you need it in 2015.

Pros: I've used this board for over a month and have had absolutely no issues with it. This board is very stable with my build (specs below). When I bought this board (for 55$) it was the cheapest board that I could find that had usb 3.0 slots and SATA 6gb/s slots.

Cons: You must follow instructions in the instruction booklet that came with the board if you want it to run successfully. To make the board run successfully you must put your RAM sticks into the red slots first before filling in the black slots. Also, put your GPU in the black slot not the red. Also, you have to have fans plugged into both the cpu fan slot and the system fan 1 slot on the motherboard for the board to even run. These 3 requirements are all explained in the instruction booklet and are most frequently not followed by buyers. Make sure you do these 3 things.

Overall Review: System Specs: CPU - FX 8320 GPU - GTX 650 superclocked RAM - 4GB (2x2) G. Skill Rip Jaw @ 1600hz PSU - Antec 450 Watt I've been running this computer with the components above for over a month and have had no stability issues whatsoever. I've even downloaded the updated BIOS from the Biostar website and everything continues to be stable.

Pros: I bought 3 of these motherboards and use Linux as the operating system. I use one at work, one at home and one as a server. They work great. Linux such as ununtu, kubuntu fully detects the motherboard hardware. The usb 3.0 works excellent. I had an ASUS high end mothere board where Linux could not reconize usb 3.0, but this Biostar is great for Linux. I do not use UEFI, I use 256GB SSD as the os drive and 4TB HDD as storage in AHCI mode formatted in GTP table and XFS as file system. I dont care about UEFI and dont need it. The bios also allows you to update itself from it using a usb drive. I have been using this motherboards for a while with AMD FX 8 cores with 32GB of ram and using preload in Linux which buffers my software in 20GB ram so they start instantly.

Pros: Where else can one buy a functional and decent AMD 970/SB950 MB for less? Have purchased two of these in the last month from NewEgg. Each has functioned flawlessly, and both have withstood hours of non-stop full-bore torture testing, without a hiccup. A good "value" board that I will be buying more of to use in future builds.

Cons: Not really a con, but know what you're buying. This is an 4+2 phase MB, not an 8+2 (or more), and is not suited for all-out, pedal to the metal, over-clocked gaming. The UEFI BIOS, is *not* graphical, does not operate with a mouse, and is not on a par with more expensive MB BIOs' in this class. That said, it's a usable BIOS, but not one for noobs. Lastly, the size of this MB is smaller than many ATX class MB's. Installed one board in a new Rosewill Galaxy 01 case, and the other, in a Thermaltake Versa II. In both cases, a couple of the "east-side" mounting holes did not line up correctly, leaving the RAM/Power Plug side of the board with out good support (where it's most needed). Easily remedied though. I simply fashioned some plastic supports out of some material I had, and used those.

Overall Review: One board was installed with an AMD 965BE (over-clocked to 3900Ghz), and the other, with an FX6300 (over-clocked to 4000Ghz). Cranked at 100% for hours, all temps stayed below, and within spec. Be sure, if you're overclocking, to get your BIOS fan settings right, first, by installing a decent monitoring program, like HWiNFO64, which gives *correct* readings of the NB (where heat could be a concern).

Cons: I received my box in great condition. No damage done to the exterior so everything shipped nicely, however, upon opening the box I noticed the SATA 4, on the bottom right corner of board, was very badly bent. I'm upset that this was overlooked when it was packaged, but it didn't affect the board from working.

Overall Review: It's a good buy, I just had bad luck when it came to the SATA port.

Pros: Very stable board. Thought I had a bad one, but ended up being old video card (video_tdr_failure). New card solved problem.

Overall Review: Would buy this board again, and recommend to others.

Cons: S3/S4... Getting this thing to sleep/hibernate under any OS seems to be a lost cause. Windows hibernates but doesn't sleep, Linux sleeps but doesn't hibernate. This conjunction means absolutely no hybrid-sleep capabilities.

Overall Review: I read alot of reviews about this particular board being DOA, but I didn't have that problem. I'm really thinking the people writing those reviews are incapable of actually installing a motherboard or understanding it's technical specifications. Another thought, I wish it had more actual USB 3.0 ports, but then again it does come with a 3.0 header.