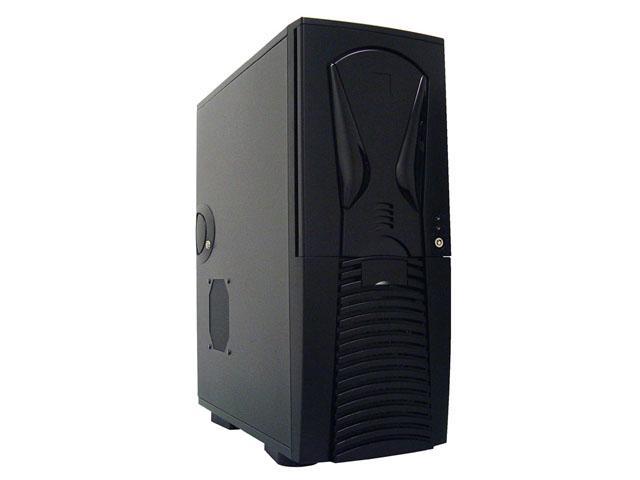 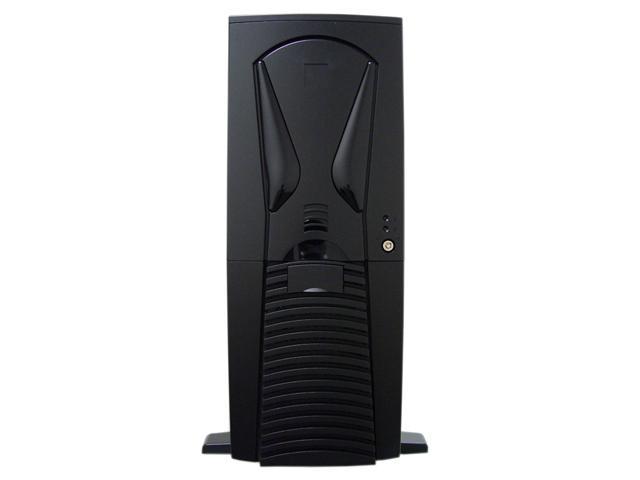 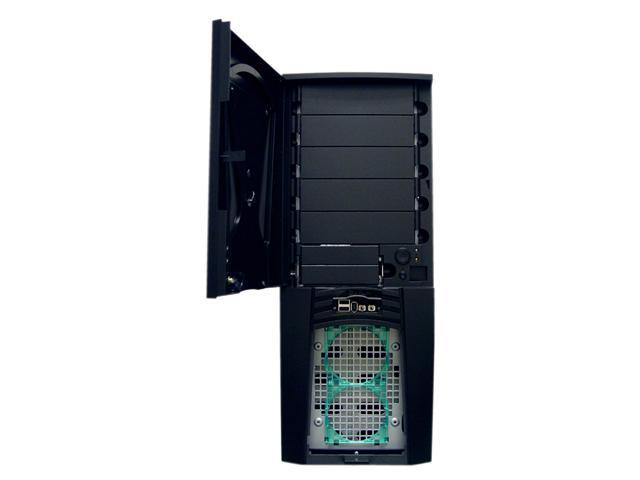 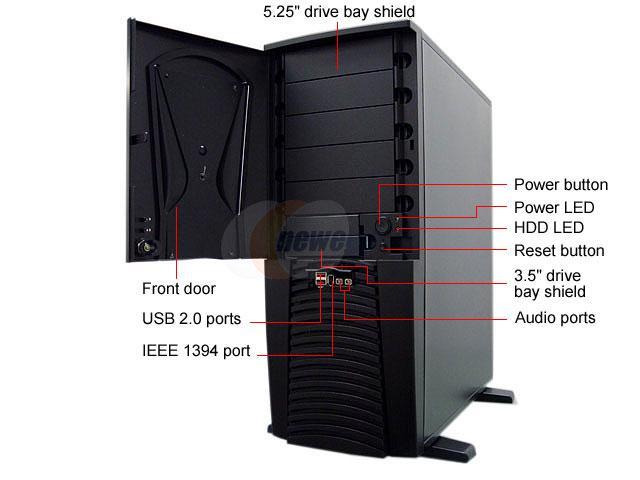 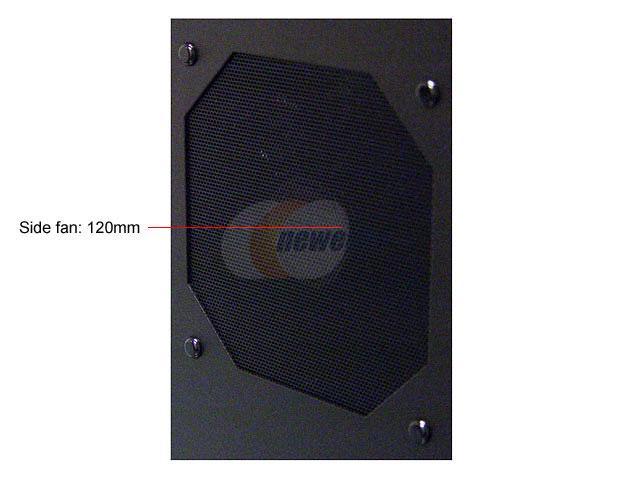 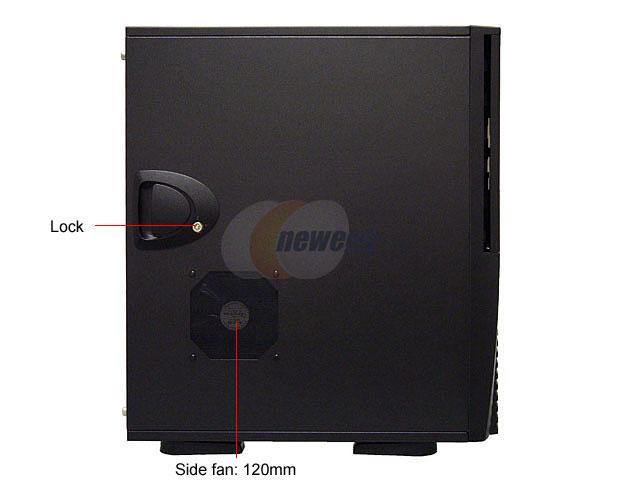 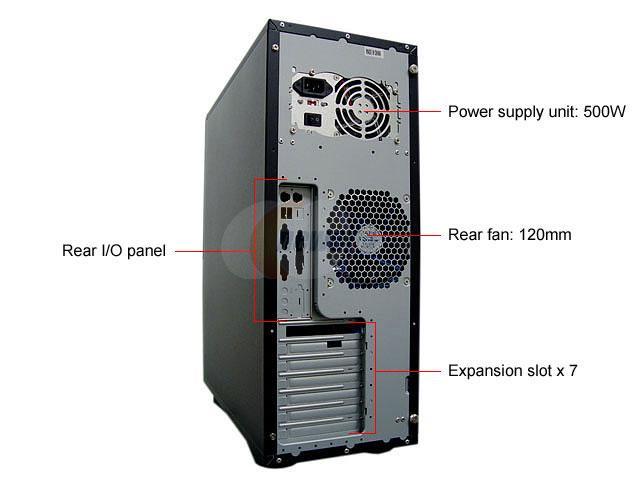 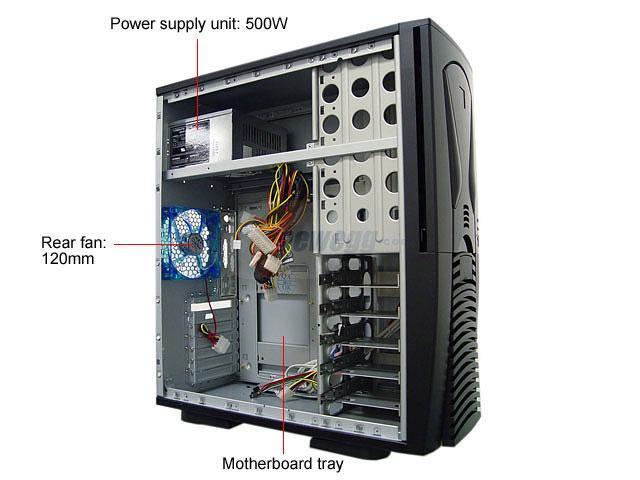 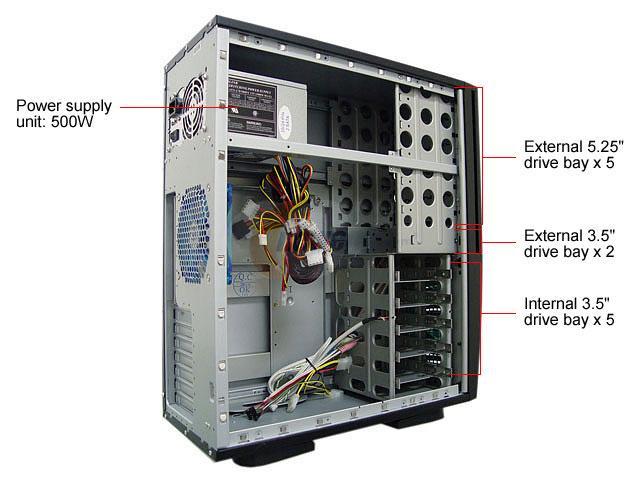 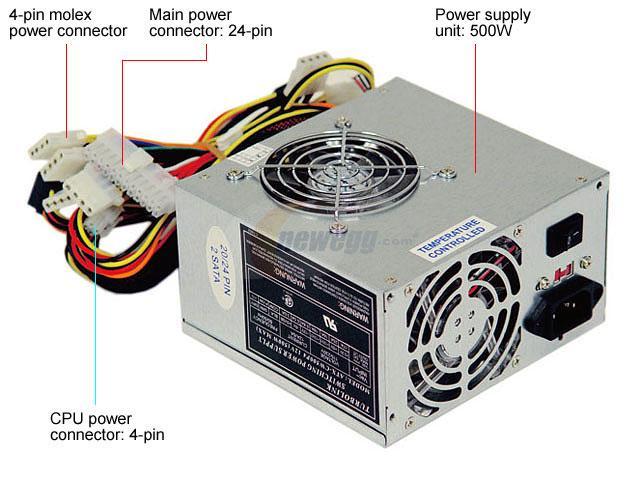 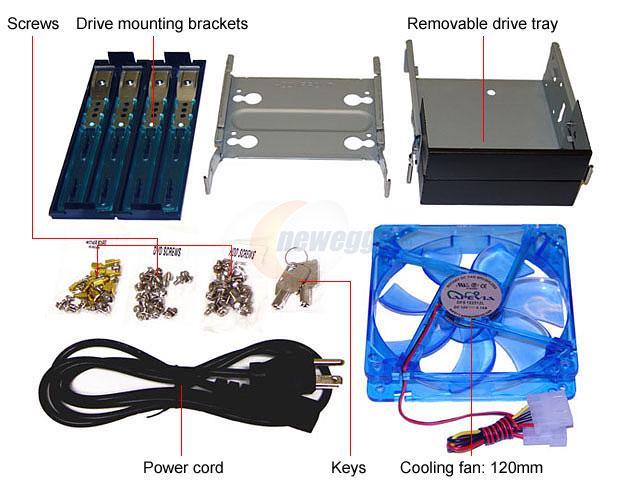 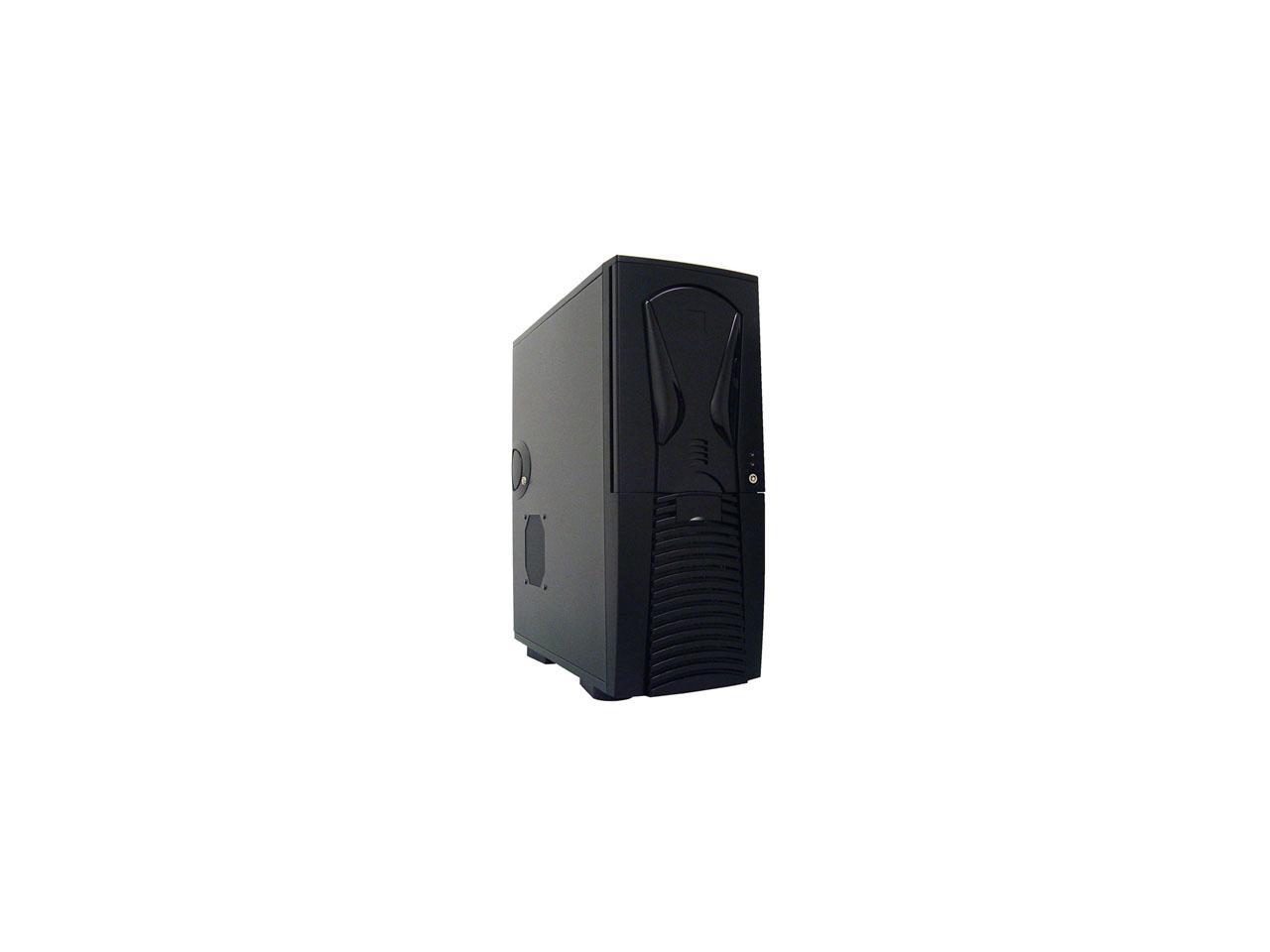 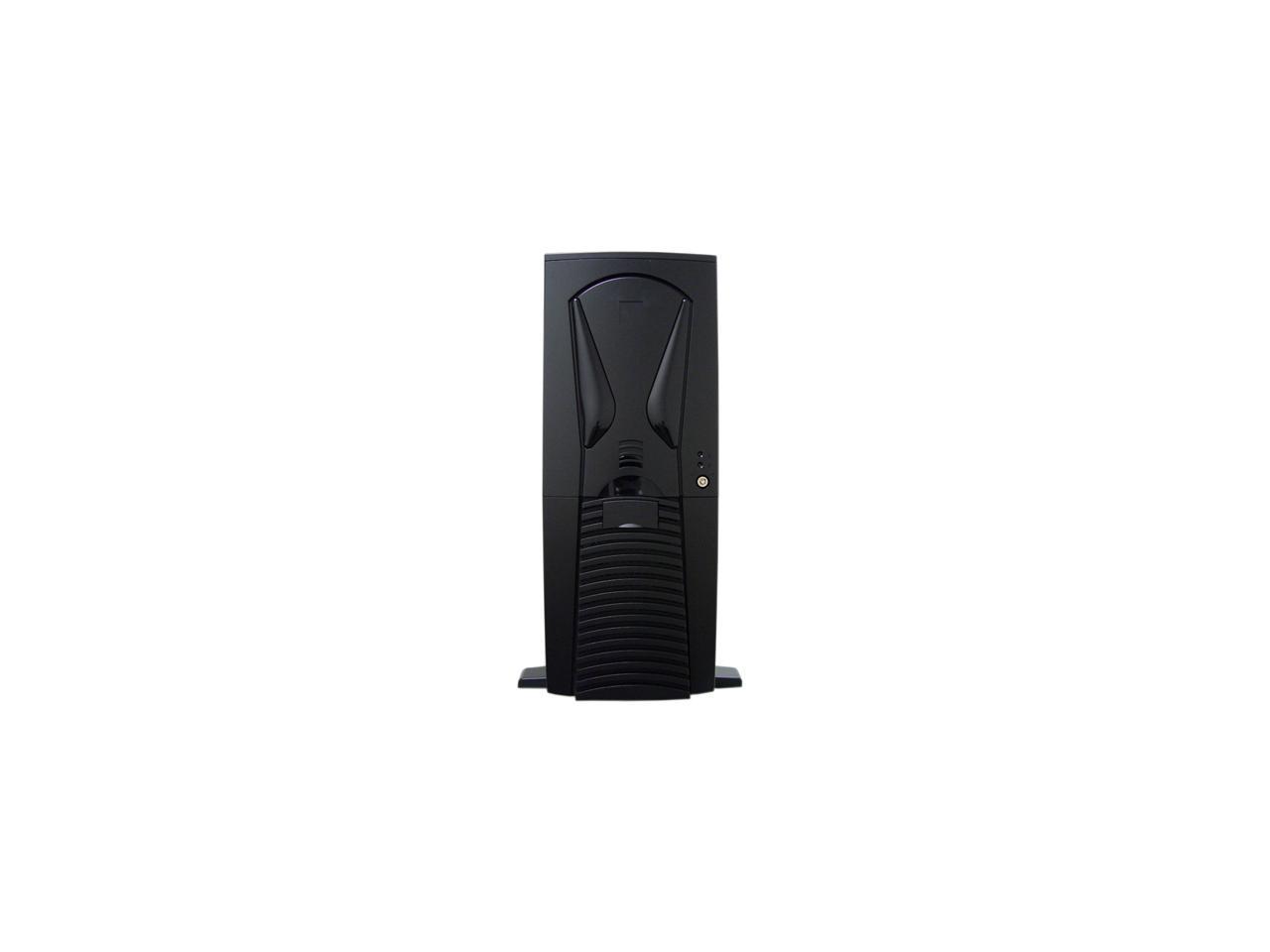 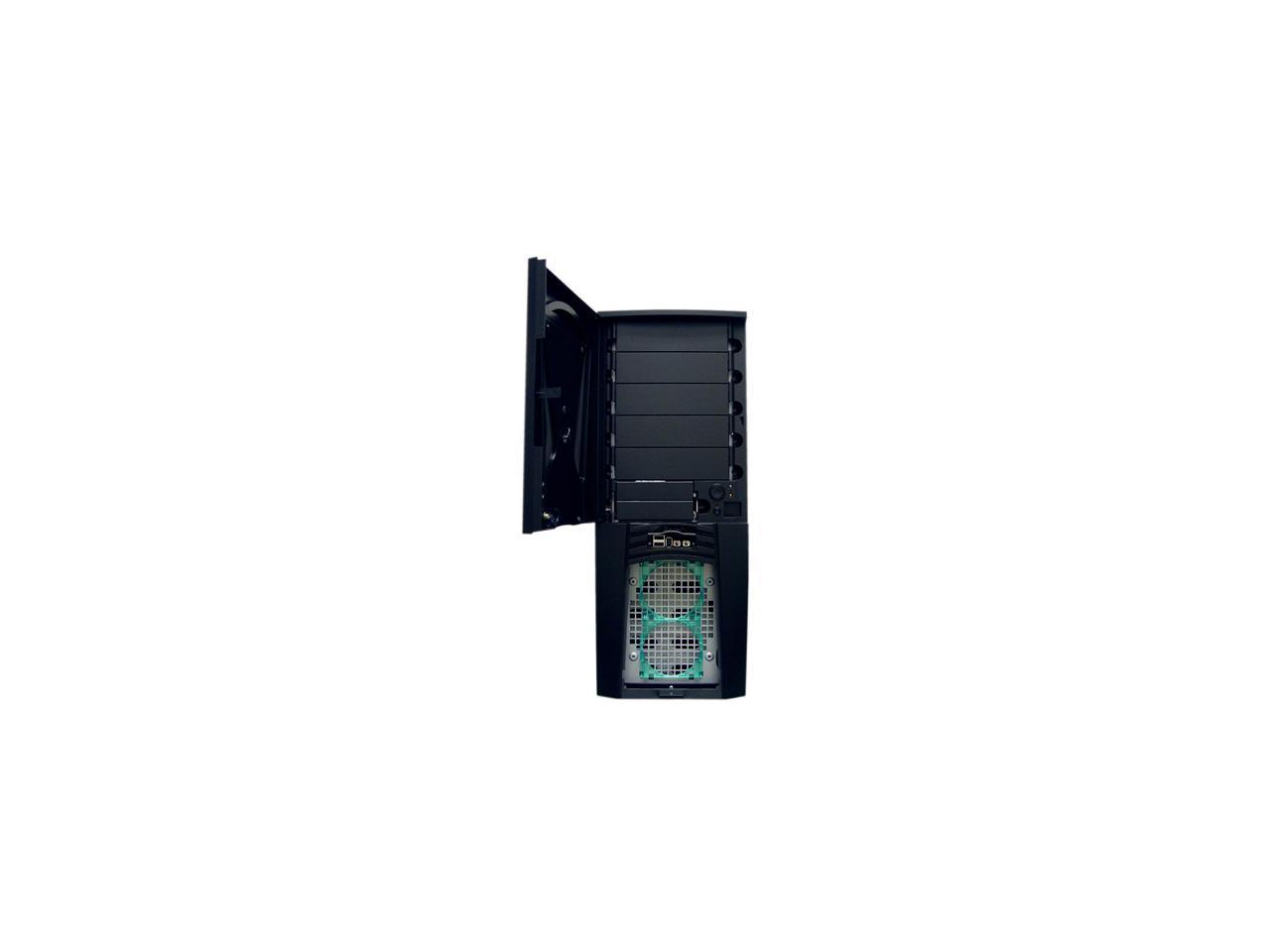 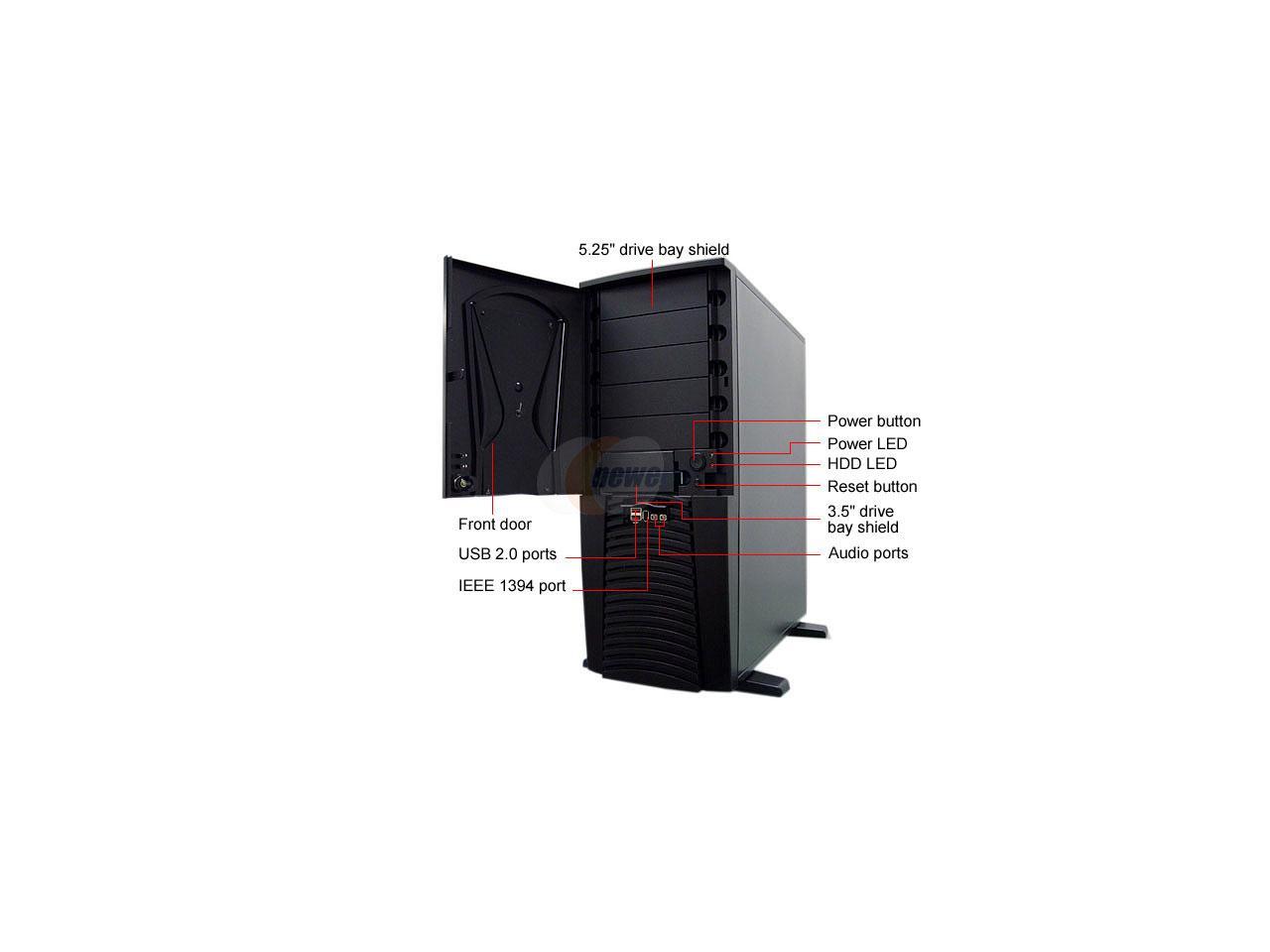 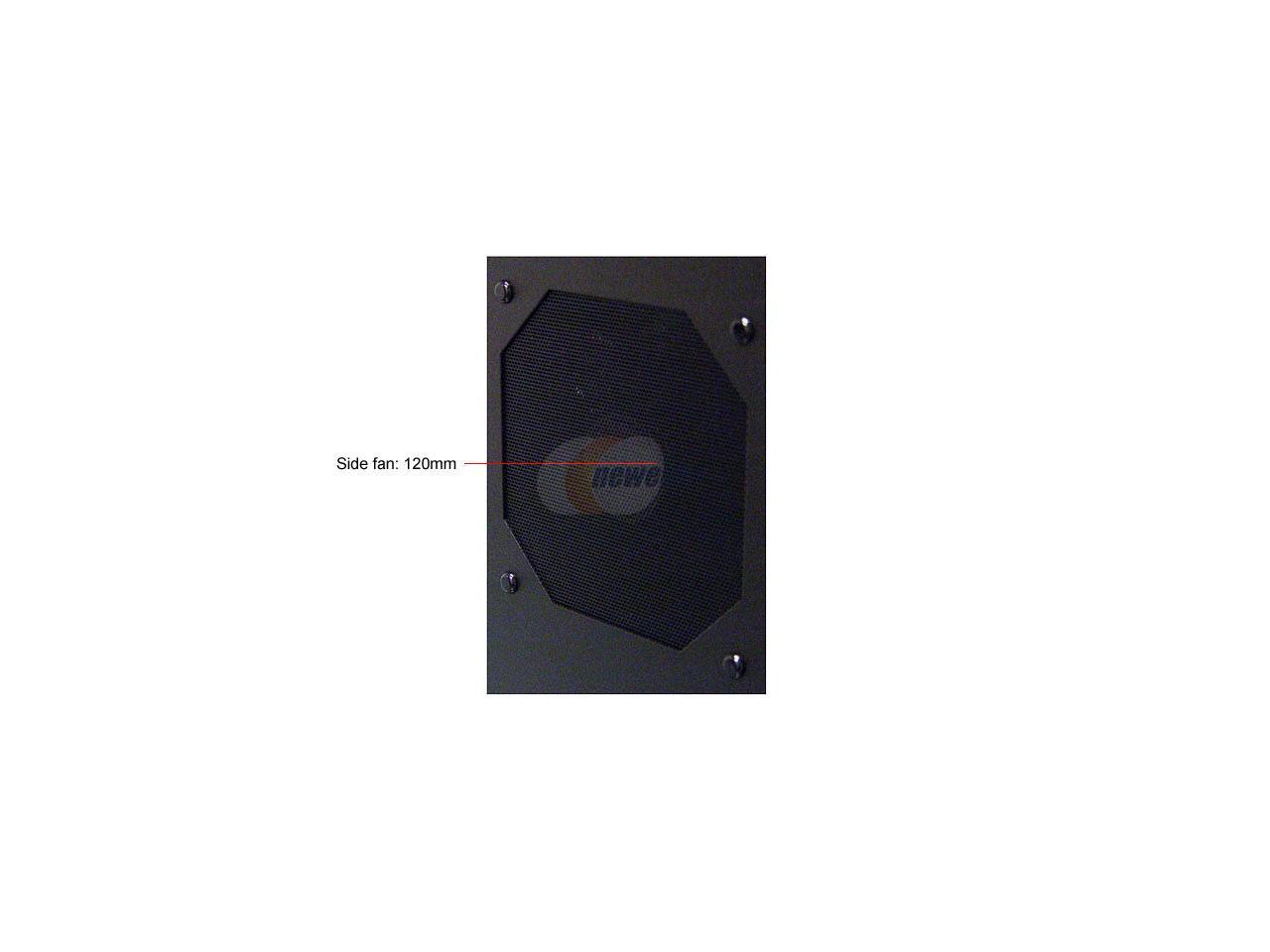 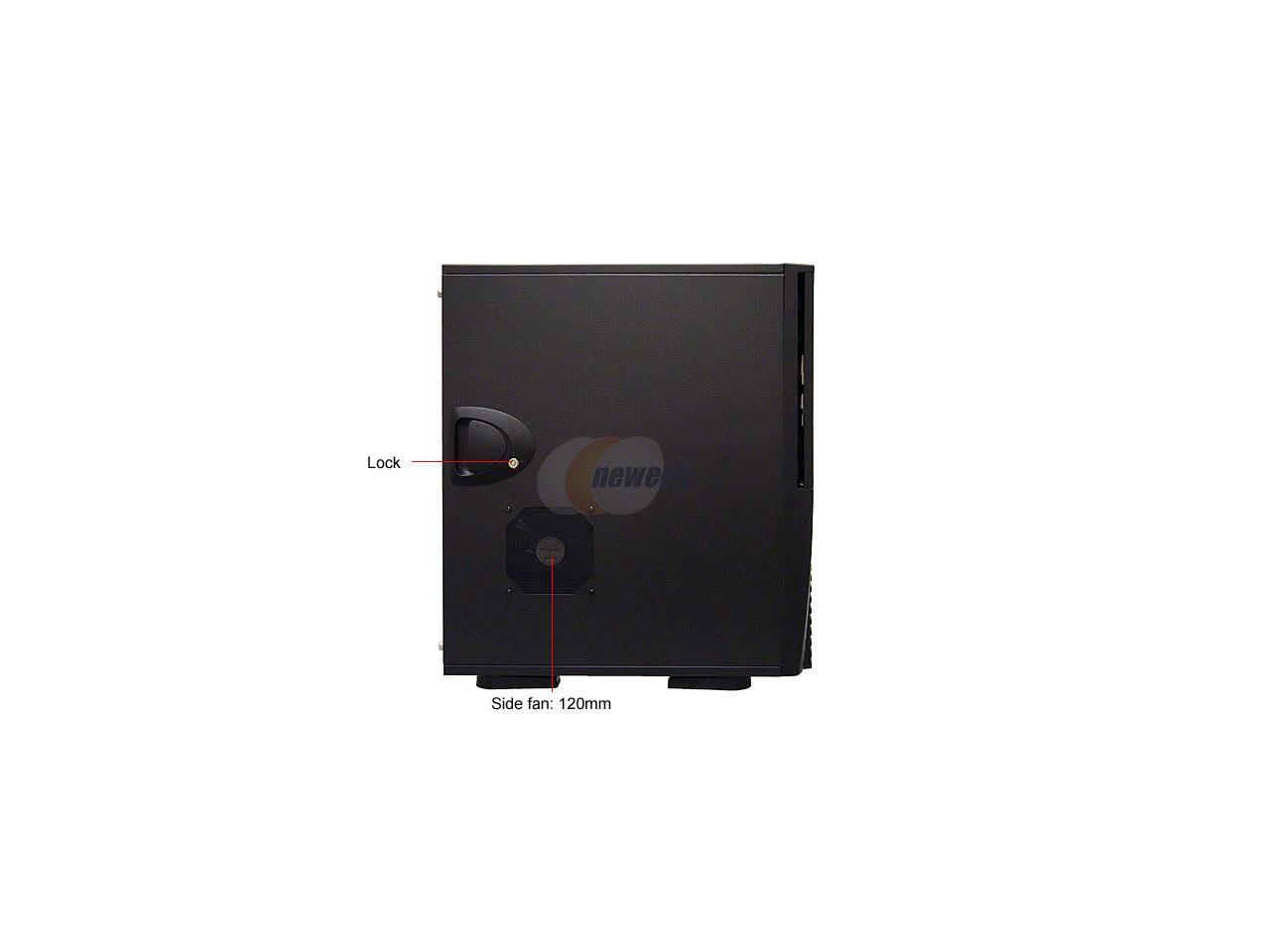 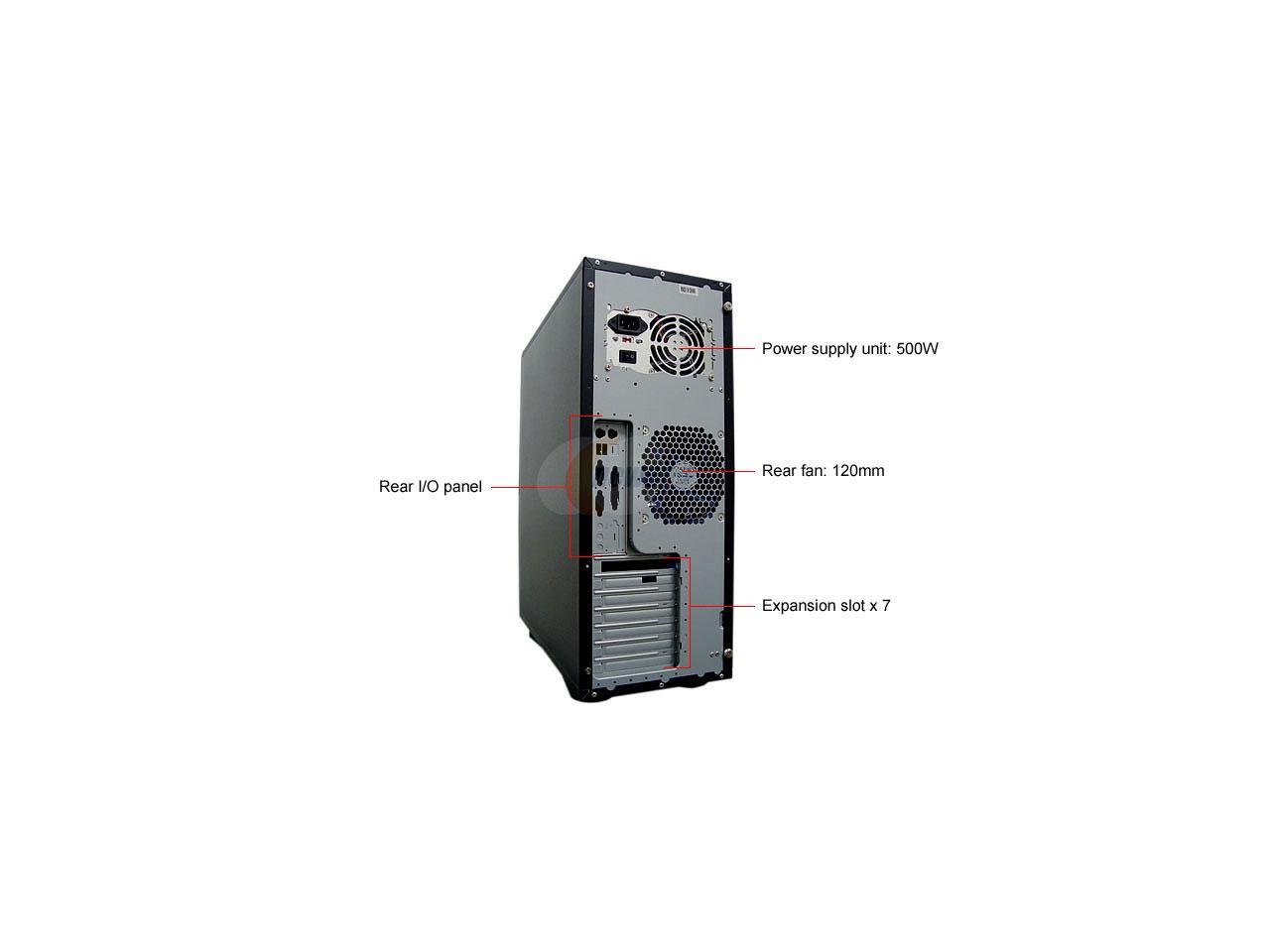 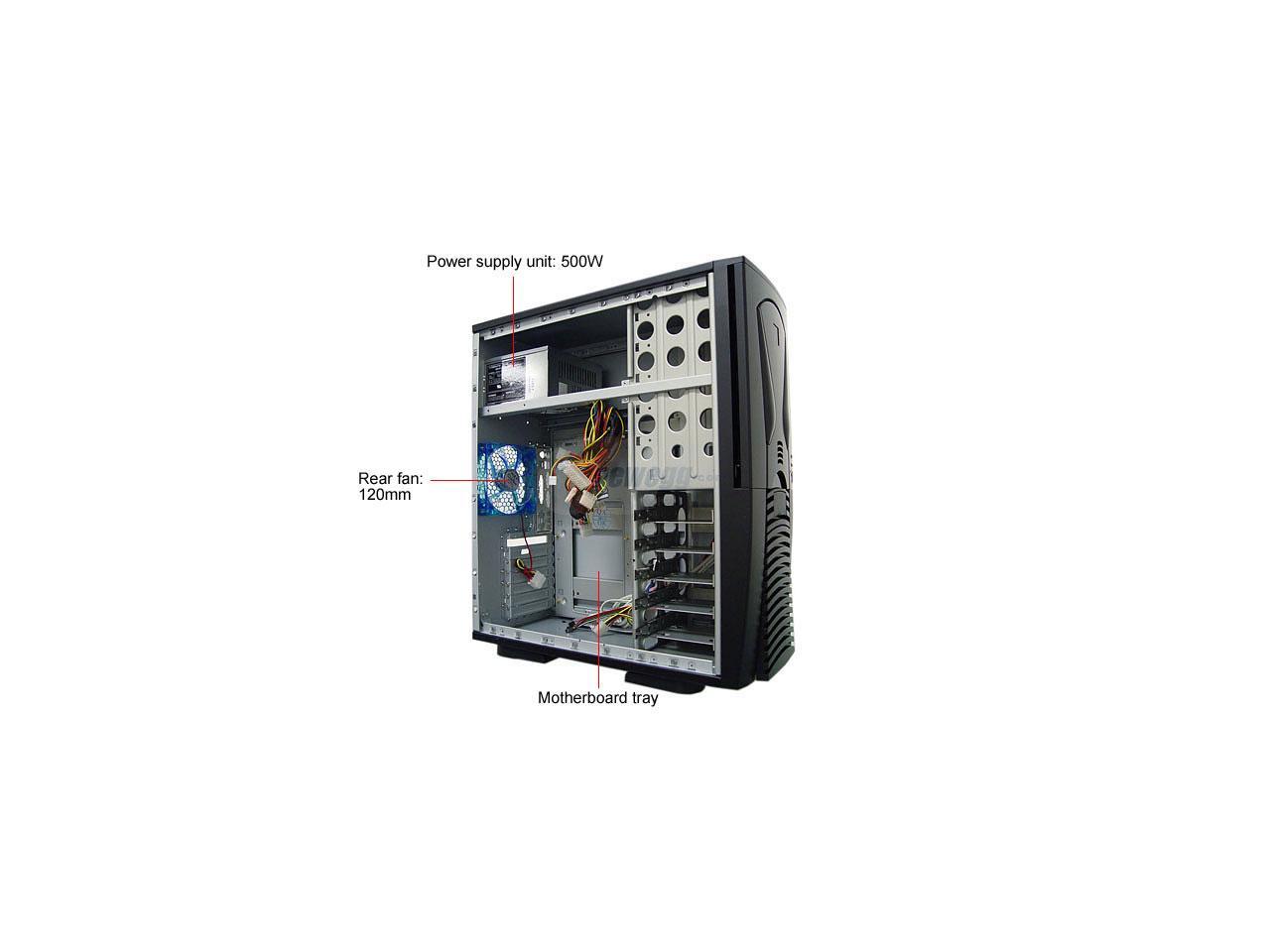 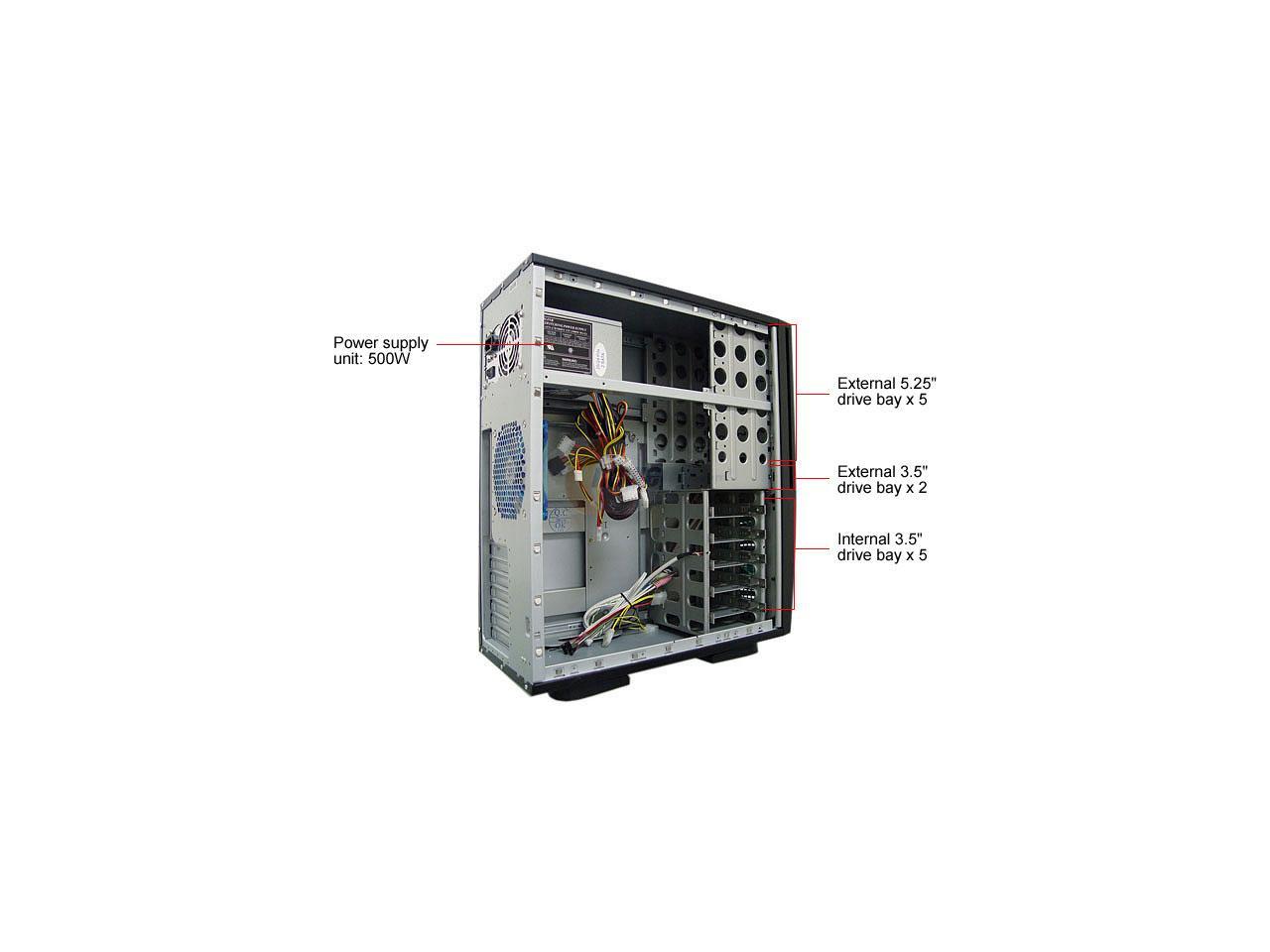 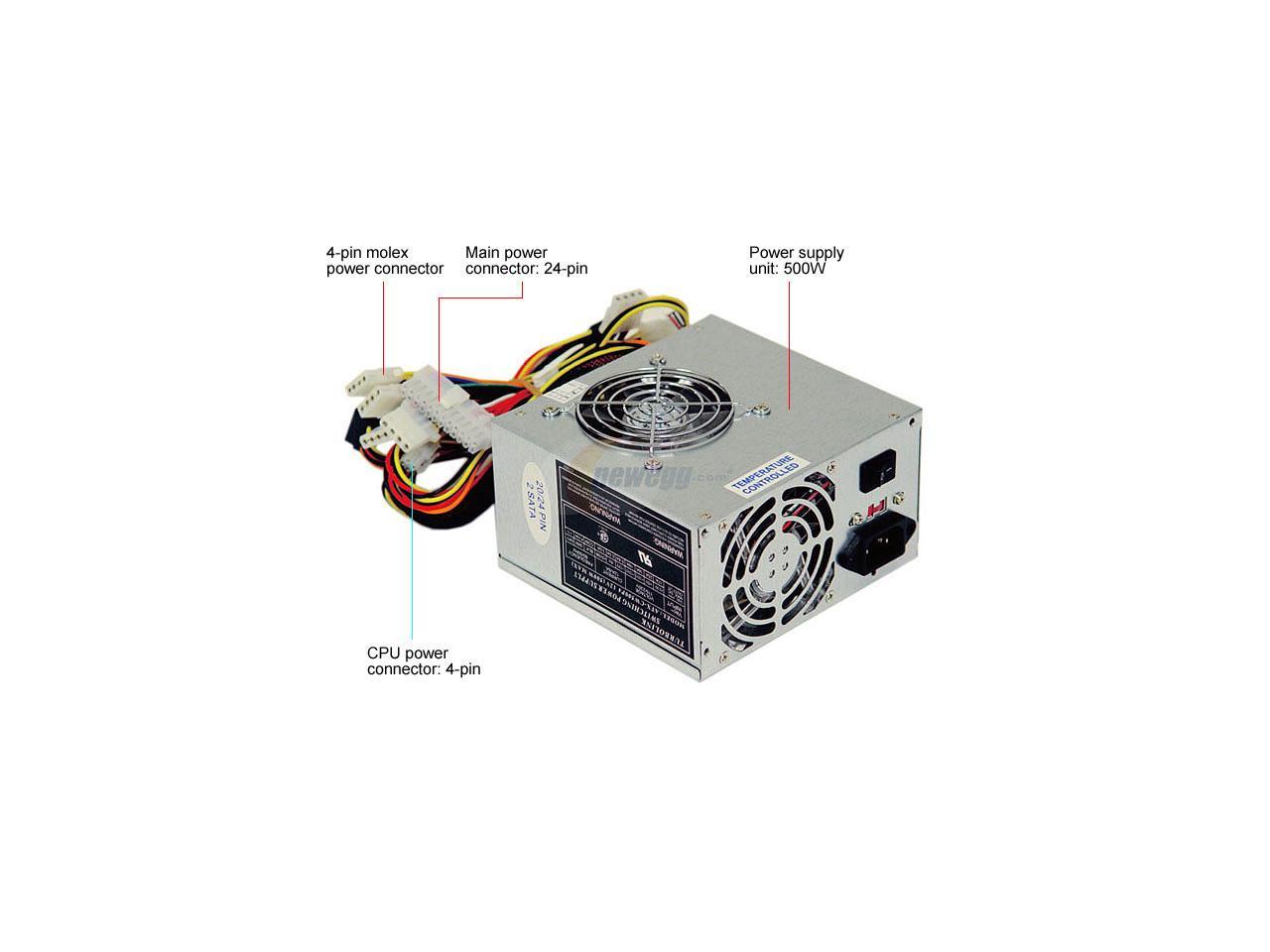 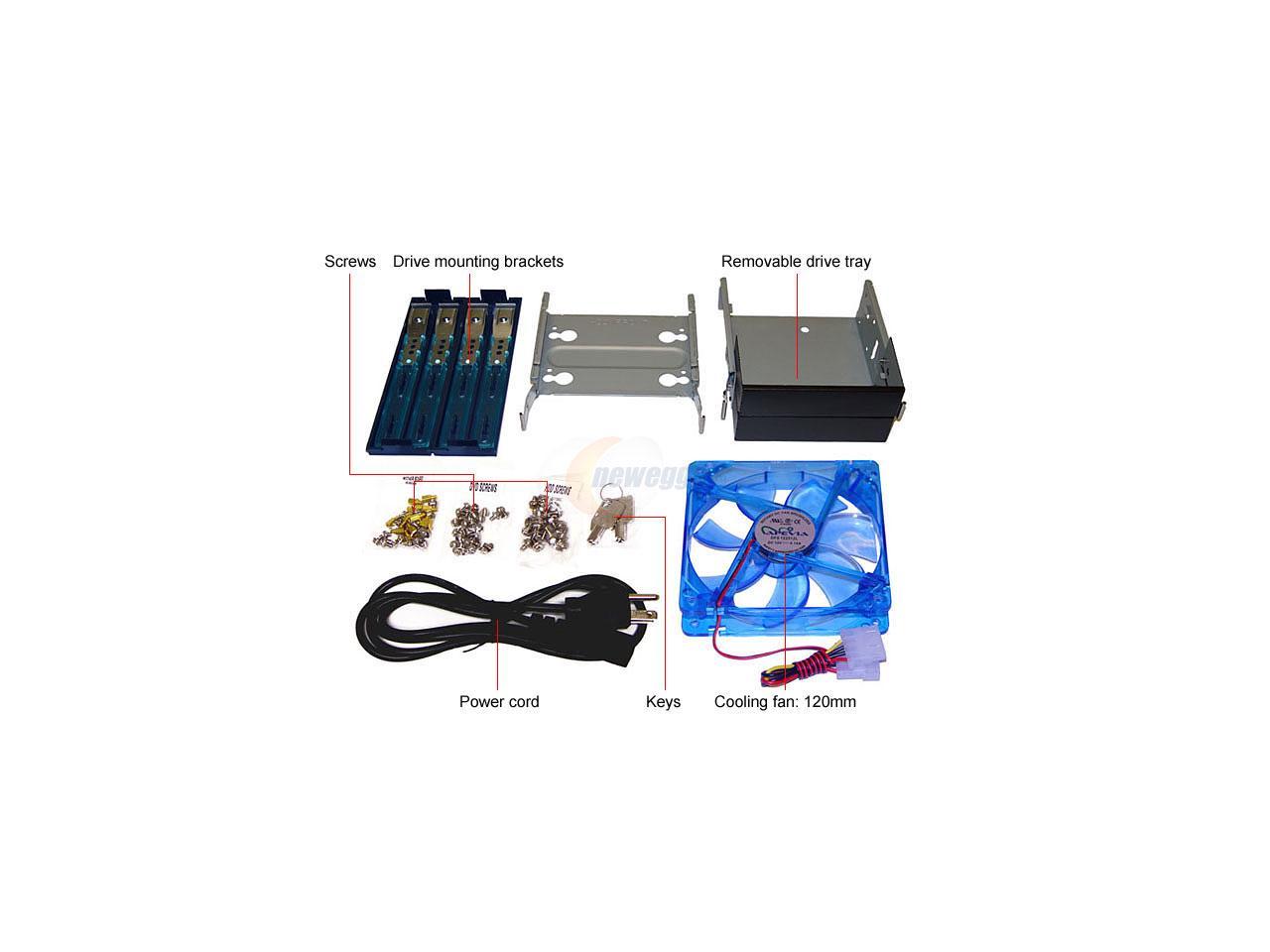 (67) Write a Review
OUT OF STOCK.
Specs
Reviews

Cons: Flimsy front bezel, cover for front audio, USB, Firewire, came off while mounting front case fans.. need to contact manufacturer as it doesn't pop back in. 500(watt) no name power supply doesn't appear to be completely stable. While not going too far out of spec to raise a real alarm it varies enough even when connected to a UPS to deem it NOT worth the risk. I had to physically modify the mainboard tray in order to get it to mount properly with a mainboard mounted to it. Problem was the board would not align properly to the I/O shield. While not a major modification, you shouldn't have to do this on case that costs anywhere near $100. Cost... This is a clone of an earlier ANTEC, and Thermaltake and numerous others. Both of the aforementioned appeared to be of better build quality, and both included a Name Branded power supply.

Overall Review: Not a bad case, but not stellar either. If you can get it for $50-$60 then your ok... Definitely not worth $100 pricetag. If you can find the Thermaltake or ANTEC versions you probably would be happier with the build quality. Powersupply was not an issue as I replaced it with a Corsair anyway. For the price they should have tossed in the 80mm front fans as well. Summary.. there are better cases in this price range but not a total loss.

Pros: This is a VERY well-engineered product. Anyone that had to "mod" the removable tray to accomodate mb got a case that was dropped during SAH & is warped (not the person, the case :)- the removable tray is flawless and you will LOVE it. Plenty of places to hide the unused cable clumps. Rolled edges everywhere means monstrous power supplies w/ a billion cables pose no threat- I can route them any freaking where I want. Accomodates a giant Vendetta 2 fh plus a 120mm side case fan??? You've got to be kidding me. The front panel connectors actually plug into my mb w/ no modifications as if standardized- wow.

Cons: Other reviewers have listed the following cons: "heavy", "big", "not a small case" and "don't under-estimate the size of this case"... THE CASE HAS 5 EXTERNAL 5 1/4" BAYS, IS MADE OF QUIET ROLLED STEEL AND HAS SIDEWAYS-MOUNTING HARD DRIVE BAYS!!! OF COURSE IT'S BIG & HEAVY!!!

Overall Review: I can't stress this enough- this case is the result of years of trying to get it right. I am a picky snothead and I will find something wrong with every case on NewEgg because I've tried them all, but I ain't got nothin' on this case- best case I've ever purchased. I couldn't wait to get online and give this thing 6 out of 5 eggs. Apevia: why wreck a perfectly awesome case by throwing in a junky-a power supply? Scrap the stupid power supply and throw in a bunch of silicon rubber case fan mounts and enough nice case fans to cover what the case can handle! You can't tell me that a power supply is cheaper than a few silicon case fan mounts and a couple extra case fans... come on! You know what? This case is so good it's hilarious. Suggesting improvements would be just downright rude.

Pros: Great price point since it includes a 550W PSU. This is my first replacement case in 10 years. I am very happy with the quality of the case, no sharp edges, thumbscrews. Lots of room. Each 3 1/2" bay has its own rail mount for fairly easy installation. 5 1/4 uses rails too, they are hidden behind the drive bay panels.

Cons: None really.....Could be cheaper?

Overall Review: Manual is a one page sheet. If this is your first build this can be an obstacle. If you've done this before, who needs it? Except to find the 5 1/4" rails. That one took me by pleasant surprise.

Pros: No expense was spared and no detail was overlooked on this case. The paint and finish are very high quality. I still haven't managed to scratch it even after multiple moves and trips in my messy car trunk! The aluminum construction is very rigid. Elsewhere the plastic components are strong and non-intrusive. There are no 80mm fan mounting points, only 120mm. This is a major reason I bought this case; larger fans output a softer, generally quieter sound. Ideal for my bedroom. The sliding snap-in drive rails make for painfully easy removal of drives. The motherboard tray slides out easily too! The included 500W power supply has managed to last over a year and a half. It powers: Core 2 Duo E6550, Intel DP35DP (P35) board, eVGA GTX 260 (2x 6-pin cable required), ASUS Xonar DX (12v rail required), Hauppage WinTV Tuner, D-Link Wireless N, 6 HDD's, 1 SSD, a Flash Media Bay and a slew of USB devices. The side door latch and locks (front) are just icing on the cake.

Cons: I always try to make a fair, unbiased review. However I'm at a loss for any cons on this product. The price seems quite fair.

Overall Review: I can't say enough about the quality of this case. It's perfect for every day use and quiet operation.

Pros: 5 5 1/4 inch bays, 5 internal 3.5" bays. 3.5" internal bays are sideways mounted and on individual slide in/out trays. 3.5" trays accept both sizes of newer/older style 3.5" hard drives. Took me a minute to figure out that I had to mount my 2 new SATA Seagate drives from the bottom, but eventually figured it out. Also 2 external 3.5" bays that are completely seperate from the internals, so 7 3.5" bays total. Removable motherboard tray is a nice feature during initial build. Both side panels are removable as well which I feel is another nice feature. Accepts 2 80mm fans from a removeable panel in front, nice touch during routine maitnence. The PSU included was powerfull enough to swap out on my parents ULTRA pentium D box, and saved me from having to buy a new PSU for thier box. Since I put a new PC power and cooling PSU in my new rig.

Cons: Had to remove front panel completely since they mount the 5 1/4" mounting brackets behind panel covers, they fell of during shipping, and were rattleing around inside between front panel, and actualy chassis. the way the wires are routed for the front USB/Firewire conflict with the installation of 3.5" internals, completely removed front panel and removed the front plugins, considering replaceing them in the future if I can figure a more logical way to route them. Also, 5 1/4" mounting brackets only thick enough to accept 1 screw from a vertical stand point, worked well on my DVD Burner, 2 Hard drive trays, and front panel from my Sound Blaster Fatal1ty front panel, But for my Scyther Kaze master ACE fan controller, it lacked luster. The bracket for mounting worked well enough on longer devices that could accept 2 screws horizontally, but my fan controller could only accept 1 screw horizontally on either side, It was originally designed to take 2 screws vertically.

Overall Review: All in all, good case for the price. I think perhaps they should offer a version of this case with no PSU since most newer setups with only base requirements will be starveing for power, not to mention if you plan on filling all 5 5 1/4" bays and all 5 internal 3.5" bays like I am doing. Included instruction manul could leave less to the imagination since it is only a piece of paper folded up with a series of pictures on it, at least it was in english tho. The 5 1/4" mounting brackets could be thicker to accept 2 screws vertically since it would not efficiently accomidate my fan controller, and it can move slightly up and down if you apply appropriate pressure. The mounting brackets were why I gave it 4/5 eggs, other than that, I would of given it 5.

Pros: Good case for the price, design is well thought out, as long as you're not going for a build using newest ( longer ) video cards like the 260 GTX. I like the "no bling" look of the case, just a nice,sleek design.

Cons: The con is really my fault which is why I still give the case a decent score. I didn't do my research before i bought it.This was going to be a new gaming pc built around the 260 GTX.Like the response from the manufacturer below states, it only accommodates cards up to 10.2 inches. The newer cards like the 200 series are 10.5 inches. Maybe if you're up to some moddiing, might be able to make it fit, but I'm not the modder type. Also, a legit gripe. The psu is junk, they shouldn't even have bothered with it. Be better if they'd left it out and put in more fans. there's space in front for 2 optional 80 mm fans ( why not just 1 120mm fan instead?).

Overall Review: I would still say this is a good case if you're going with a smaller video card like the 8 or 9 series. I'm still kicking myself for not reading up more or asking questions before I bought it. I just figured ( wrongly) that being a tower it would hold anything.

Pros: first of this is a big case, but that make it simple to work on. the remove able tray for the mother board for stress free situations. also the hard drive bays are removeable as well. it eelevers out standing circulation for reduced heat.

Overall Review: If you are looking for a great case, easy to work on, and provides great circulation this is your tower. i have put in 2 different computers sence i have had this tower and i love the easy axis

Pros: It's big! Ya ya ya. It's not small! no no no. I'm really pleased with this case. It has a small footprint for its size, and tons of interior room. Easy HDD rack that uses the individual slide-in drive trays, the full height bay rails utilize screws which I like. Rather than fumbling with screwless rails. The rails conveniently stow on the back of unused external bay covers. Keeps things tidy and you don't have to worry about keeping track of random case hardware. Otherwise, screwless drive installation. This unit does have sata powerr connectors, but no 8-pin. Get a $2.00 4-pin to 8-pin adapter while ordering. Power supply has been solid and reliable so far. It looks sharp, no dumb windows flooding your room/office with blue light. Steel contruction aids in reducing fan noise, with the 2 provided fans it is pretty quiet. The side access is removable not hinged which I also prefer. Front access door its heavy duty but requires very little force to open and close. I would buy it again

Cons: Fold out feet are plastic but haven't caused a problem, and don't need to be deployed anyways.