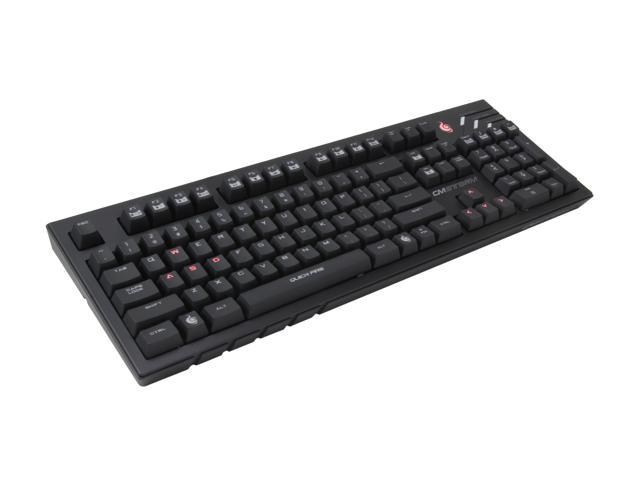 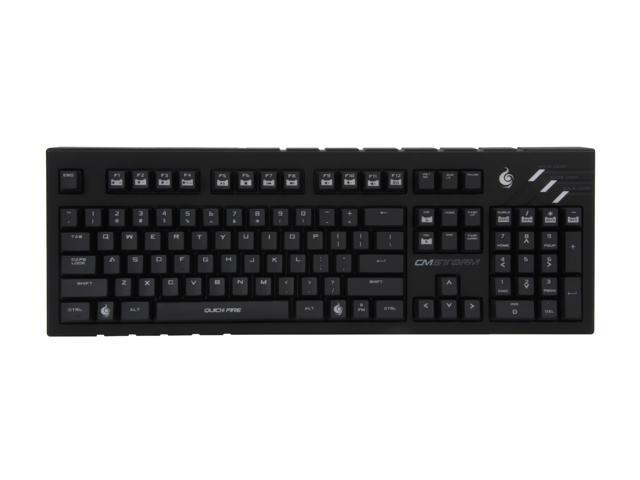 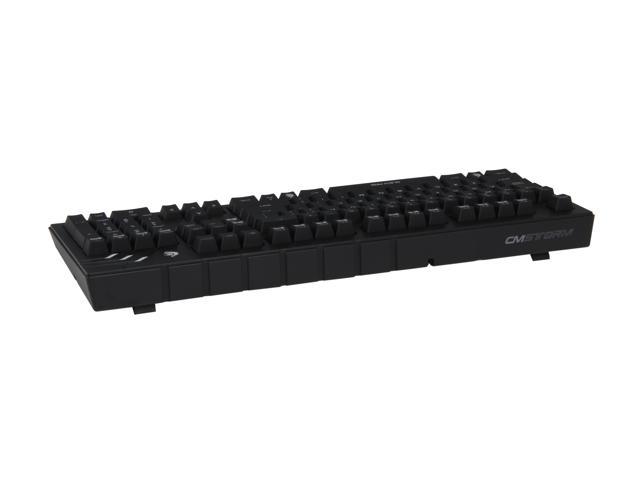 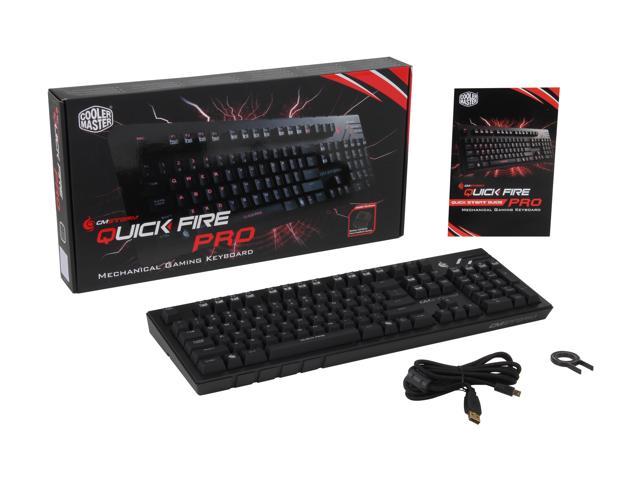 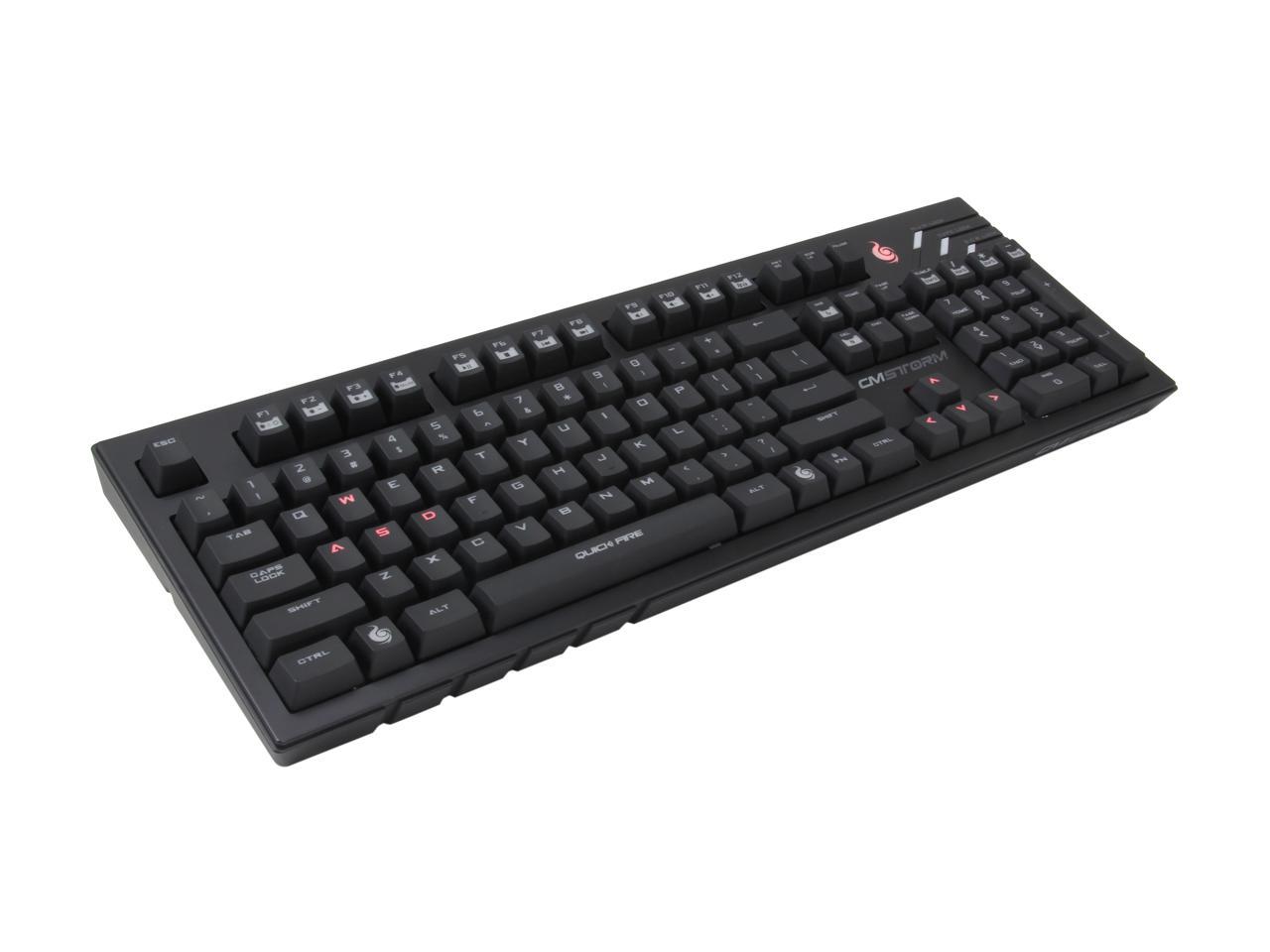 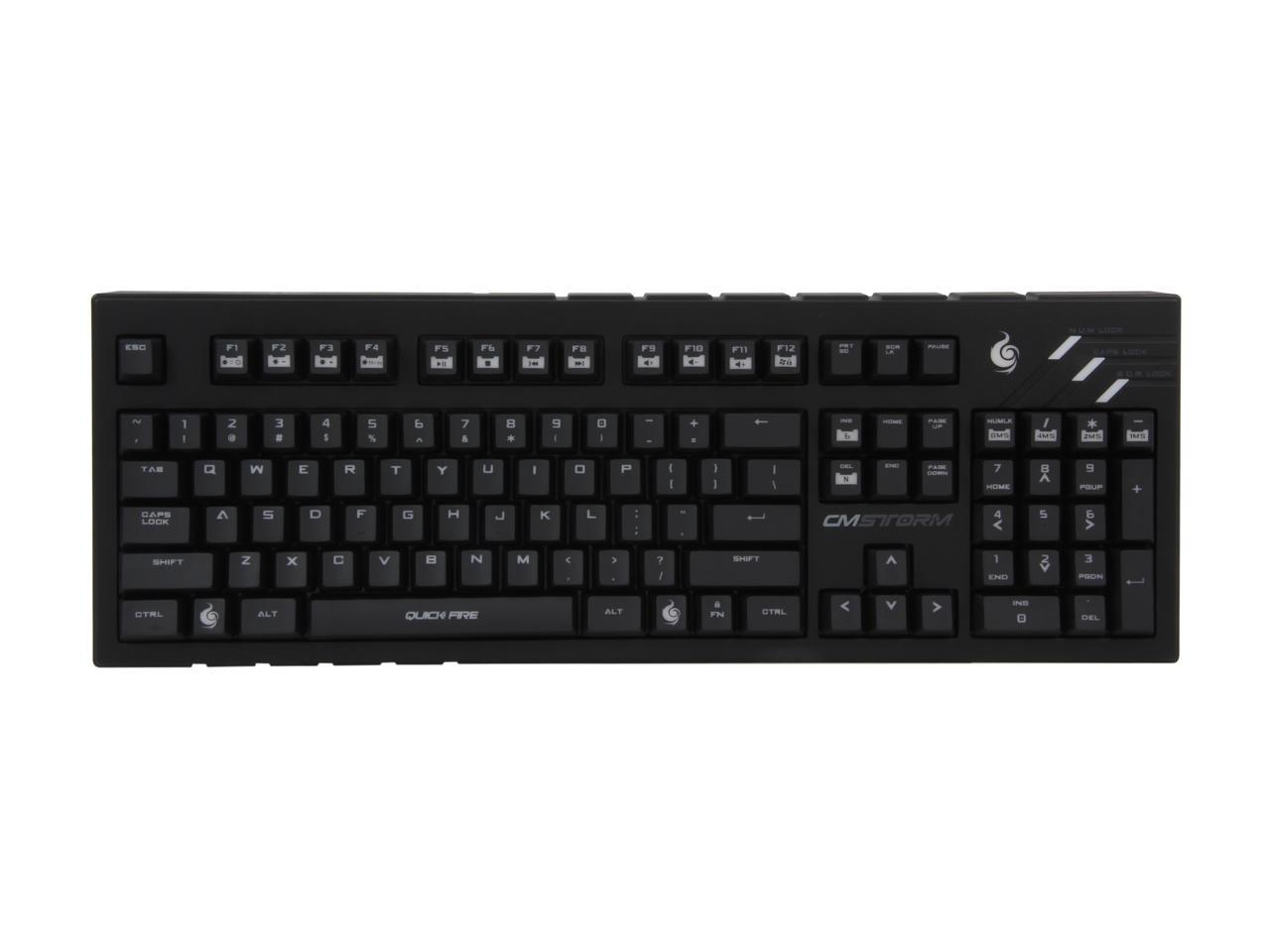 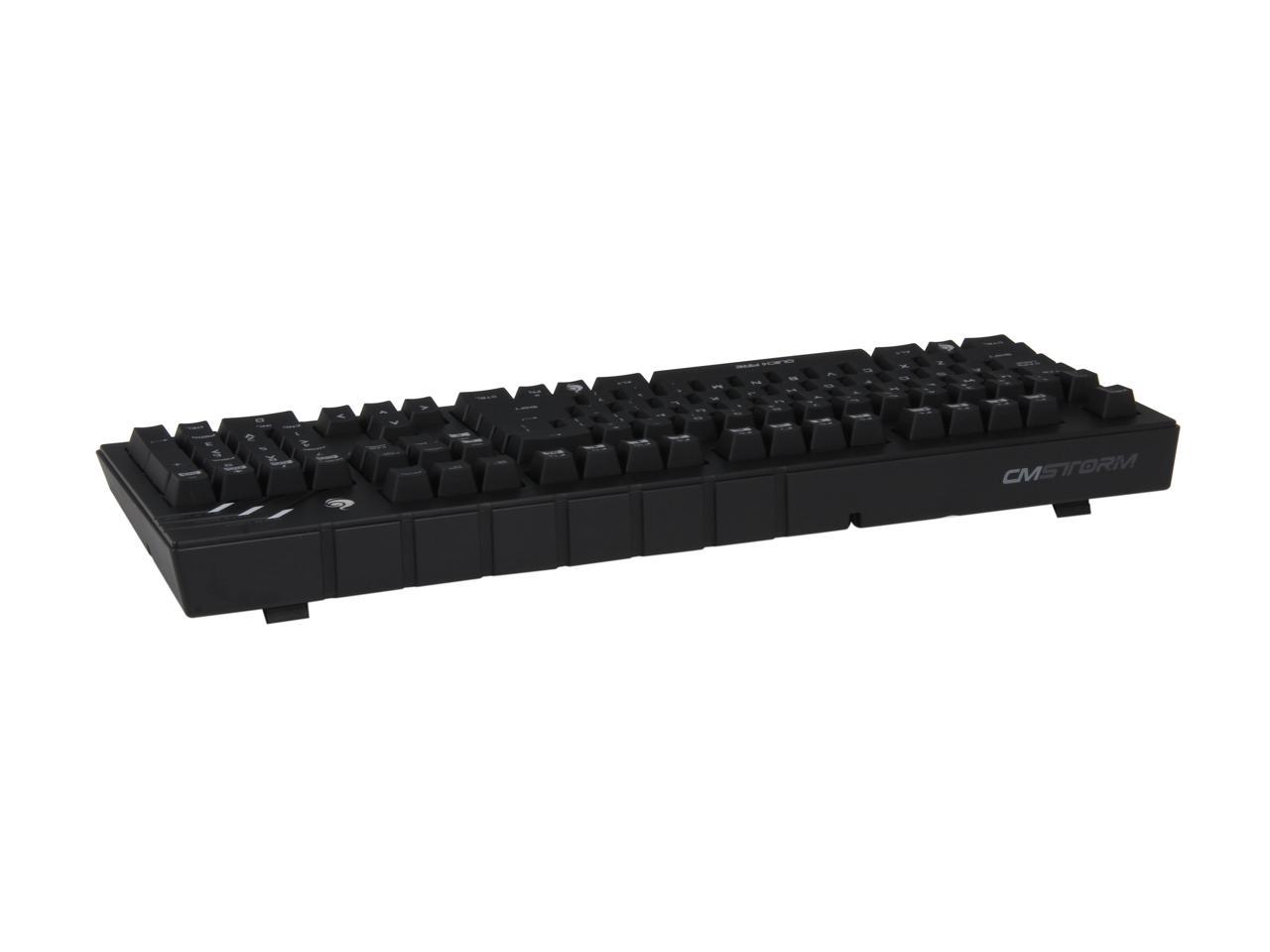 (191) Write a Review
OUT OF STOCK.
Overview
Specs
Reviews

Mechanical keyboards are becoming an essential piece of hardware for anyone who takes their PC gaming seriously. CM Storm aims to provide gaming enthusiasts the ultimate gear to assure them victory. The QuickFire Pro comes equipped with ultra-durable mechanical Cherry MX switches, guaranteed to survive at least 50 million taps. The anti-ghosting tweaked matrix, NKRO support VIA USB, and fully backlit keyboard ensures that you never miss your opportunity to win − even in the dark.

The QuickFire Pro is available in 4 versions (Black, Brown, Blue, or Red Cherry MX switches) so no matter what type of feedback you’re looking for, we got you covered. The competition begins and ends with the QuickFire Pro.

Cons: I don't really have any major complaints about this keyboard. -mini-USB cable requires a little bit of effort to insert all the way and I can see why people thought this was DOA -I would have preferred a different font style for the keys -not all the keys are backlit (if that is important for you)

Overall Review: I needed a keyboard that would work well for typing and occasional gaming. I spend about 8-12 hours daily in front of my computer and thought it would be worthwhile to get a new keyboard. This is my first mechanical keyboard and I have been surprised how pleasant and responsive the keys feel. If noise is a concern, these keys are louder than a silicone switch despite being labeled as silent. The mx cherry brown switch does not make a click as the key is actuated, but the noise comes when I bottom out the keys. I think the noise will be less when I learn not to bottom out my keys. I will look to get O-ring dampeners to soften the noise.

Pros: If you're looking for a sturdy, matte, and Cherry browns, look no further. -Backlighting is awesome -Feels very sturdy -Matte finish

Cons: USB cords are a little weird, sometimes it doesn't work in the BIOS, restarts will fix it though, and honestly, CM should have just made the whole thing backlit

Overall Review: I got these after I tried the Razer BlackWidows. These keyboards were night and day. The Razer felt cheap, was not backlit (and more expensive), and had a glossy finish. In just the few days in which I used it, dust and food began to build up noticeably on areas of the keyboard, not to mention the fingerprint markings.

Pros: Cherry brown is still clicky but not nearly as bad as I feared and aside from the noise the spacebar makes it's close to what I had previously. Another part to that is that I've noticed I'm not banging on the keys quite so hard even after this first week. My typing speed has improved some and my accuracy went up. The keys are NOT as wiggly. Kudos for making a solid keyboard (so far)

Cons: There IS an acclimation period to a mechanical keyboard that's built somewhere near as solid as this -- couple of weeks from now I'll be a lot happier I have this and may have to get one for work. Keys still feel a little closer together than they did on my previous keyboard, and a lot higher. I don't miss the side macro keys from my gaming keyboard (though I never really used them) but I do miss the multimedia ones. The function key combo for the volume control works fine, but it's not nearly as convenient as others I've had, plus the mute. There is no palm/wrist rest present on this keyboard -- I don't generally use a wrist/palm rest but I'm considering changing that (or changing my armrest height on the chair, but that has other cons)

Overall Review: I use the keyboard for both work and play. When my last one died (and I held on to that one for close to 5 years), I went looking for replacements. As a work keyboard, even as a script coder and an IT admin, this has been a good keyboard to use over the last week as I broke in to it. As a gamer, there has been some difference in my first person gaming, specifically FPS from the NKRO -- I don't think I'd realized I was stuck on some of those issues until I didn't have them anymore. Don't let me construe this as a hardcore gaming review, others can give you better feedback. It is, however, a very solid keyboard. Would buy again.

Pros: -Solid construction -Cherry MX browns means you have a great keyboard for typing as well as gaming -Some LED backlighting - a very natural key alignment and not tenkyless -fully mechanical (be sure to check for this when shopping for your mechanical keyboard, it is sadly not always the case)

Cons: -no wrist pad for ergonomics -your only LED color option is red -Some are having trouble with the mini usb connector(although I personally have not) -LED is only partial -Perhaps a bit too much branding (see spacebar)

Overall Review: If the price is right don't hesitate, this keyboard has everything that you should care about.

Pros: It's a very good, solid, and durable board. If you love a good gaming mech kb with cherry mx brown switches, this is the one. I also love how I'm to disable the windows button so it won't mess up my gaming. The LED lighting is pretty cool, and I find it pretty handy that you can control how bright you want the keys to shine.

Cons: When I got this keyboard, I was almost about to return it...but I wanted to test my luck and use a different USB cord instead of the one that was provided in the box. Suprisingly, the keyboard worked when I did it..which makes me believe that a majority of these keyboards have a problem with the original USB cord, or the jack on the board itself. I advise anyone who buys this keyboard to try using a different USB cord before saying it's DOA.

Manufacturer Response:
Hi Aster, Thank you for your comment. The problem with the usb is that most users are not plugging the usb into the keyboard all the way, and therefore, the keyboard as not functioning properly. As we've troubleshooted many of these returned product and found this was the main issue. If you have any other concerns, please contact us on live chat. Provided link below. Respectfully, CMUSA Customer Support

Pros: This is a very good, high-quality FPS gaming keyboard. If you mostly play first person shooters this board certainly won't let you down in an intense firefight. I personally find the CHERRY MX Brown keys to have a very subtle feedback, but if you have strong fingers you'll barely feel a thing. The Brown switches are good if you also like to type. Includes the number pad cluster that the Quickfire does not have. Partially backlit keys on WASD cluster (extended) with LED controls. Up to 1ms polling rate and NKRO.

Cons: The keyboard sits 3/4" above the desktop surface so unless your palms are naturally padded you will definitely need to purchase a cushioned palmrest (I took 1 egg off). In FPS games, your left hand will always be on the WASD cluster so you WILL need a wristrest of some kind. FN key must be engaged to use the multimedia keys, including volume control. I don't mind this so much as there doesn't seem to be room left on the keyboard for separate keys but I never had to do this with my Logitech. No macro keys, no software utility whatsoever (not an MMO keyboard).

Overall Review: Partially backlit keys only on the WASD cluster means this keyboard is not marketed torwards MMO gamers, but it does perform flawlessly for FPS use. I'm actually hoping that Cooler Master decides to makes a FPS wristrest for this keyboard. If you decide you really need complete backlighting, a wristrest, and macro keys on a keyboard, I'd suggest you purchase the CM Storm Trigger which costs only a bit more.

Pros: -uses costar stabilizers just like the most expensive boards you would have to import! -Standard layout so you can replace keycaps -Driver-less design makes it easy to use on any computer. -FULL USB PORT, I can't stress this enough the ones the micro usb end up breaking period, i've had two break on me from two different manufacturers this one will not.

Cons: -Doesn't light up, I knew this when ordering so not really a con -Driverless design means driverless, no custom settings. -Will not make breakfast for me no matter how much I yell at it.

Overall Review: It was either this or a $300 keyboard, I'm glad I went with this one it has the same build quality built by same people with a little cm storm logo on the back I can live with! I wish I would of ordered the green switch one just to try it out i've tried blues and browns and have liked both!

Pros: This keyboard is absolutely, positively awesome. The tactile feedback of the brown switches is phenomenal. The keyboard is solidly designed and surprisingly heavy. I do not really care for the backlighting, but that is really not the reason why I purchased it.

Cons: This is where the glowing review ends, unfortunately. The second I put the keyboard on my desk I realized that it cannot sit flat on my desk. I tried setting it on different flat surfaces in my home to ensure it wasn't my desk. Indeed, the rubber feet at the bottom of the keyboard are not a uniform height so it cannot lay flat. I have a folded piece of paper underneath one corner as a temporary fix to the issue. These things happen, so I reached out to Cooler Master support. Upon registering my keyboard, it showed that my keyboard's warranty expired in 2002. Mmmmkaaaaayyy, that must be a mistake. I opened up a live chat and spoke with a frustrated yet helpful representative who tried to do everything he could. Apparently Cooler Master is working with a new system and he could not even issue an RMA for me. I was advised that I was the first and only person on a new list of people that will be contacted once they figure out how to use their new non-functional "system".

Overall Review: I will continue to use the keyboard because I cannot really tell anything is wrong with it as long as I have paper folded up leveling the keyboard out. I will not be purchasing another Cooler Master product in the near future. I hope to hear back from them soon but you never know. I will update this review if/when I hear back from them.