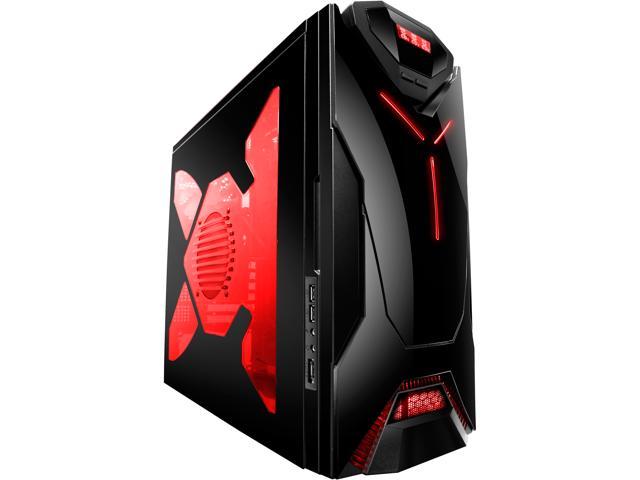 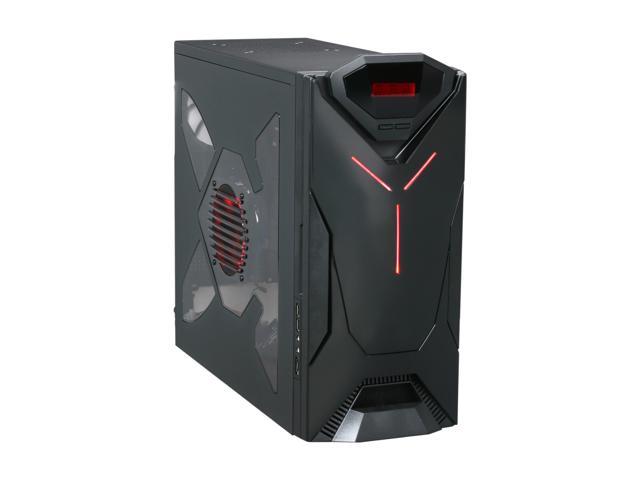 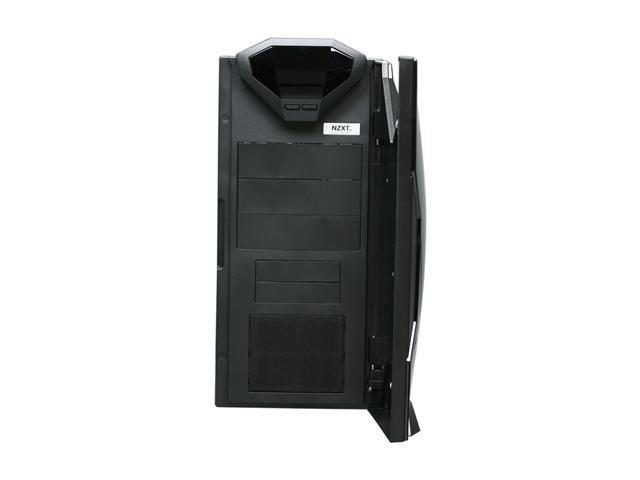 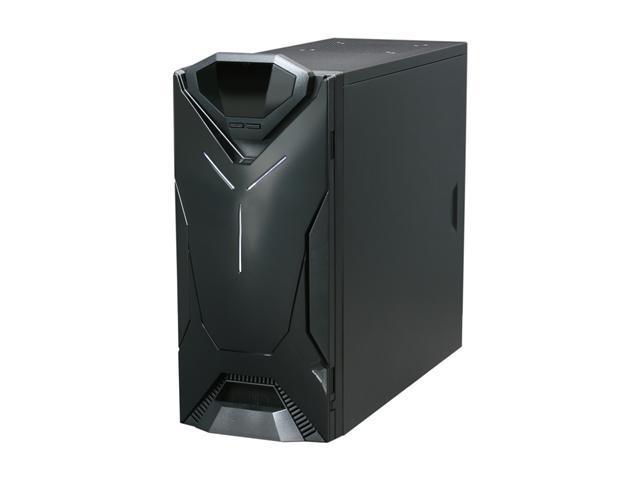 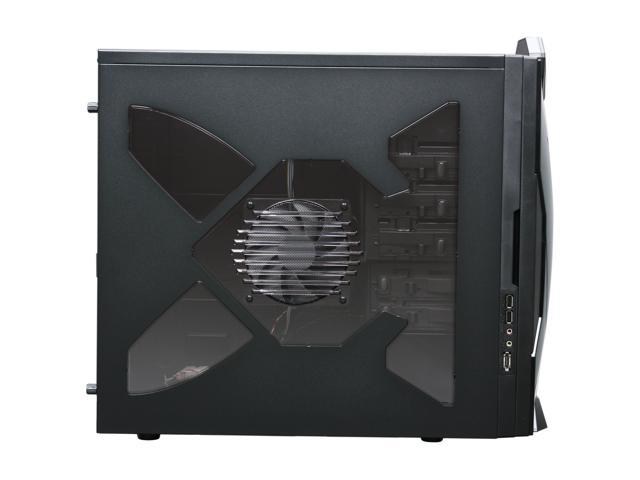 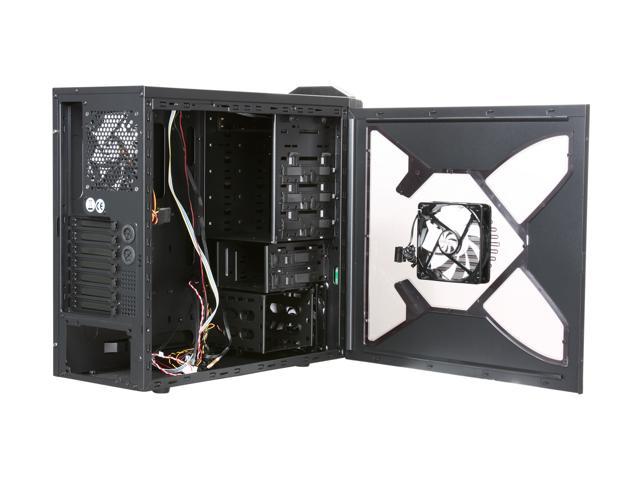 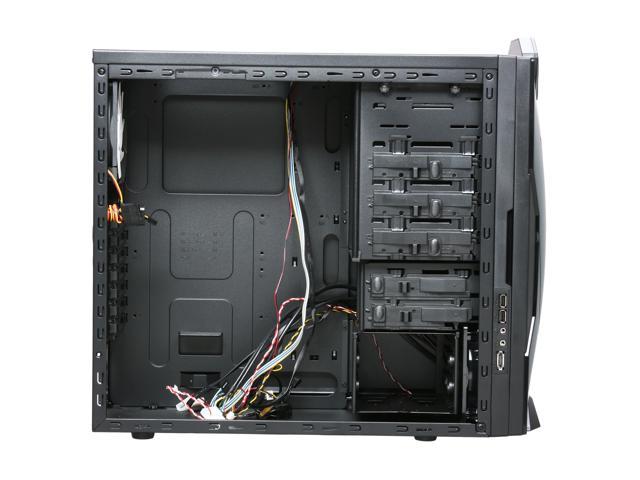 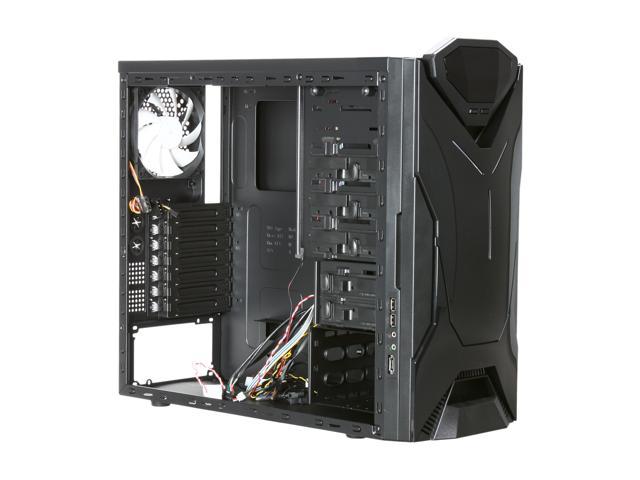 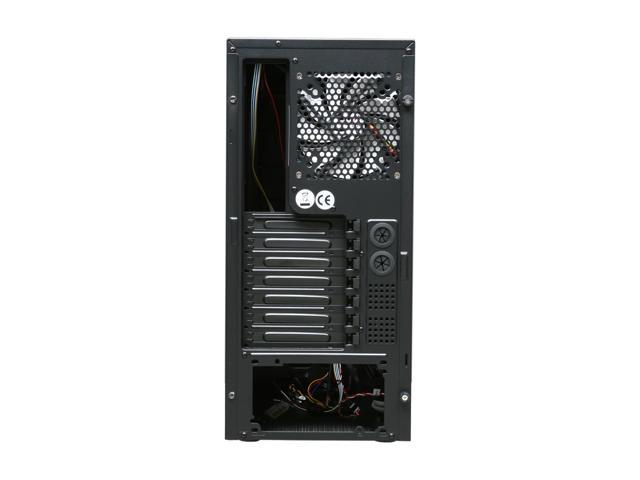 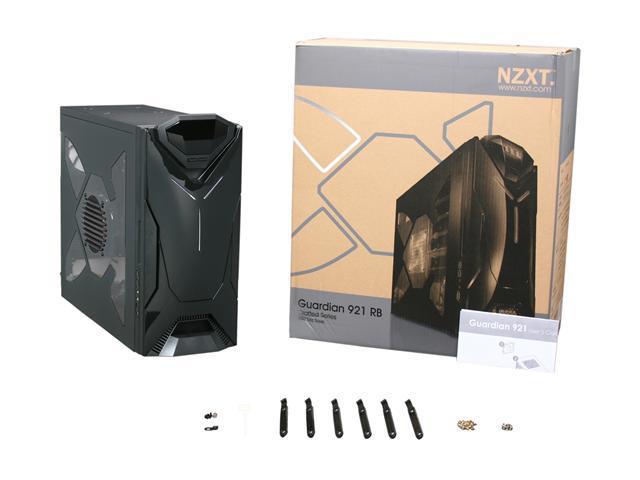 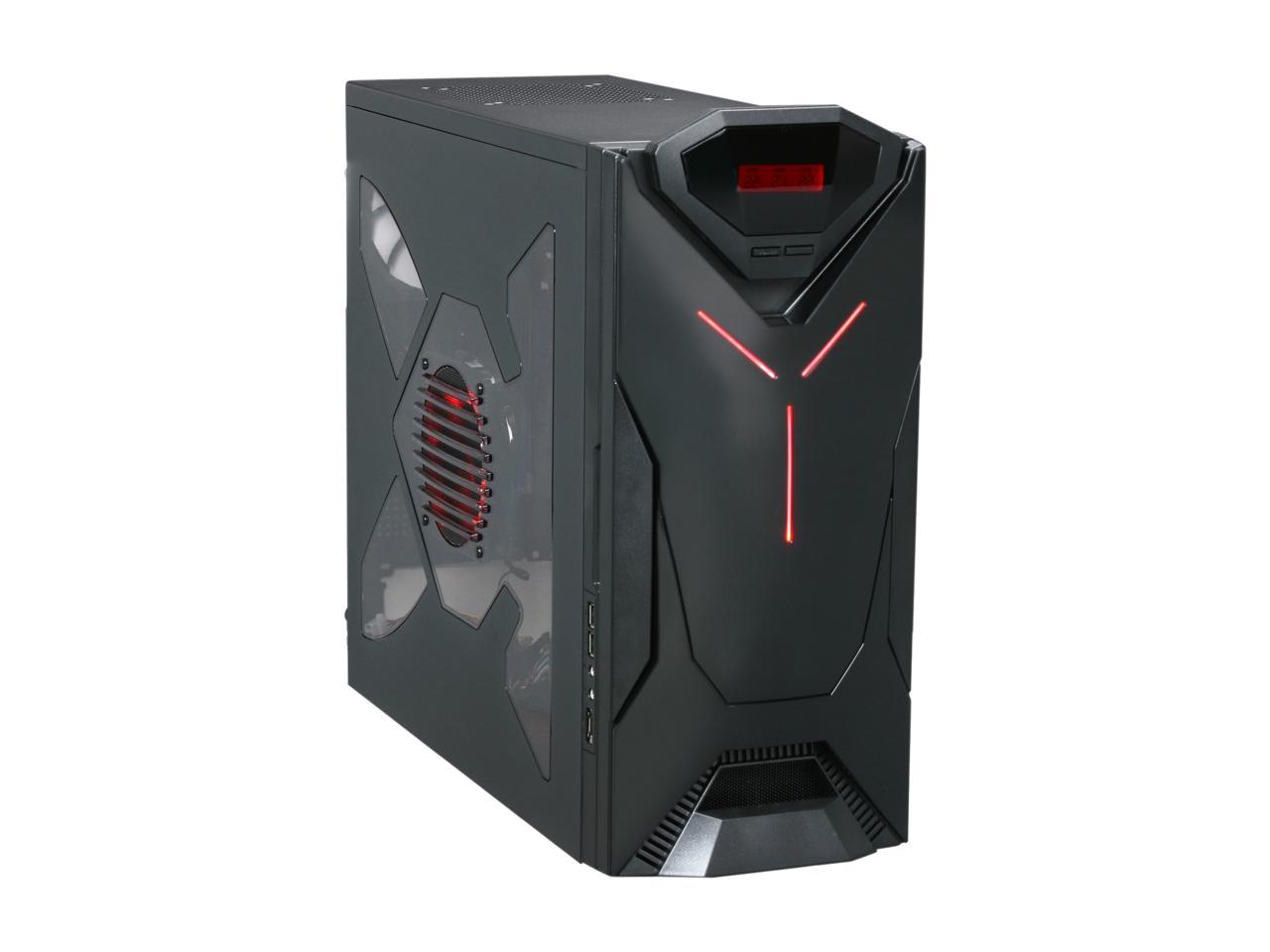 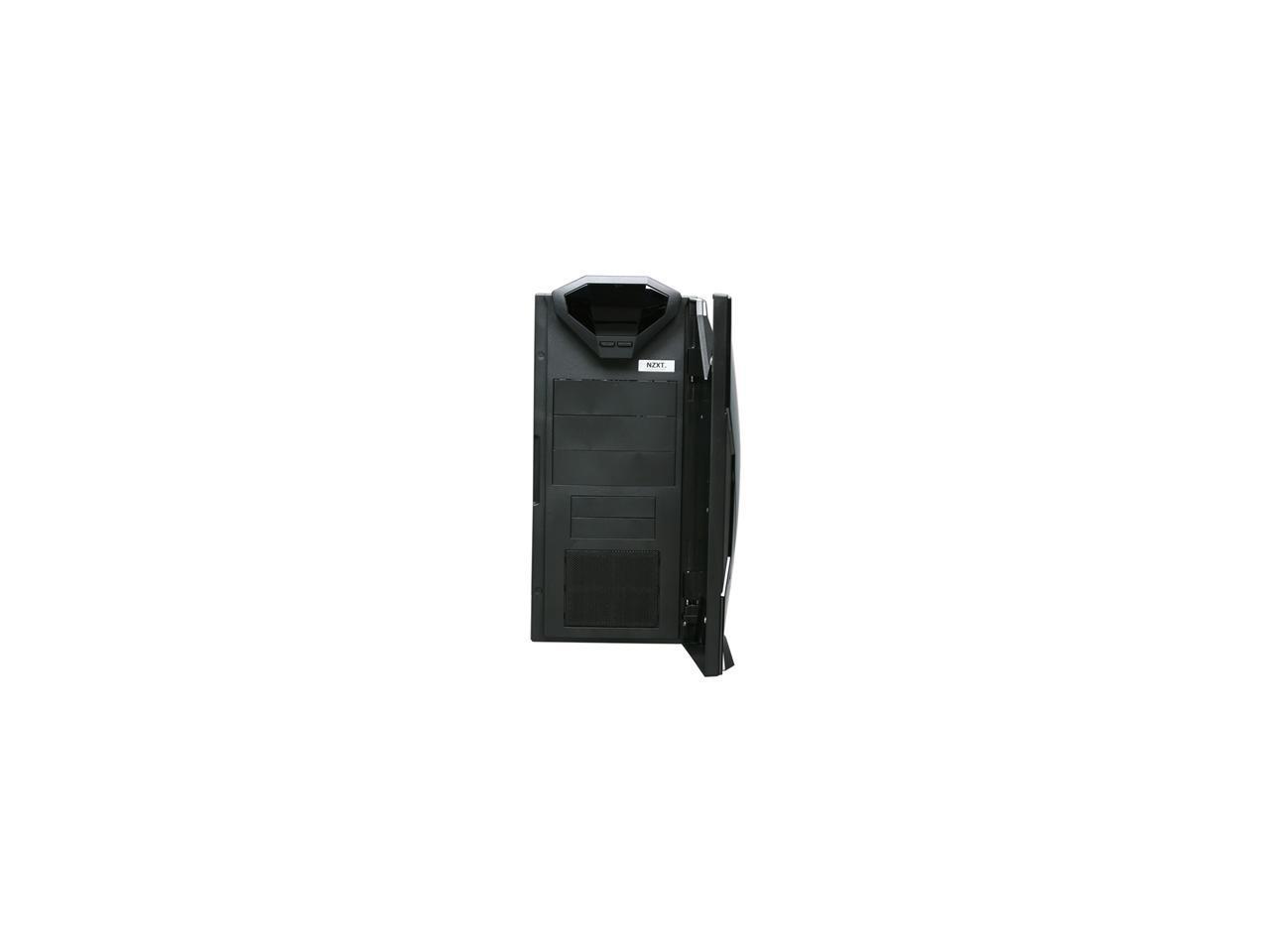 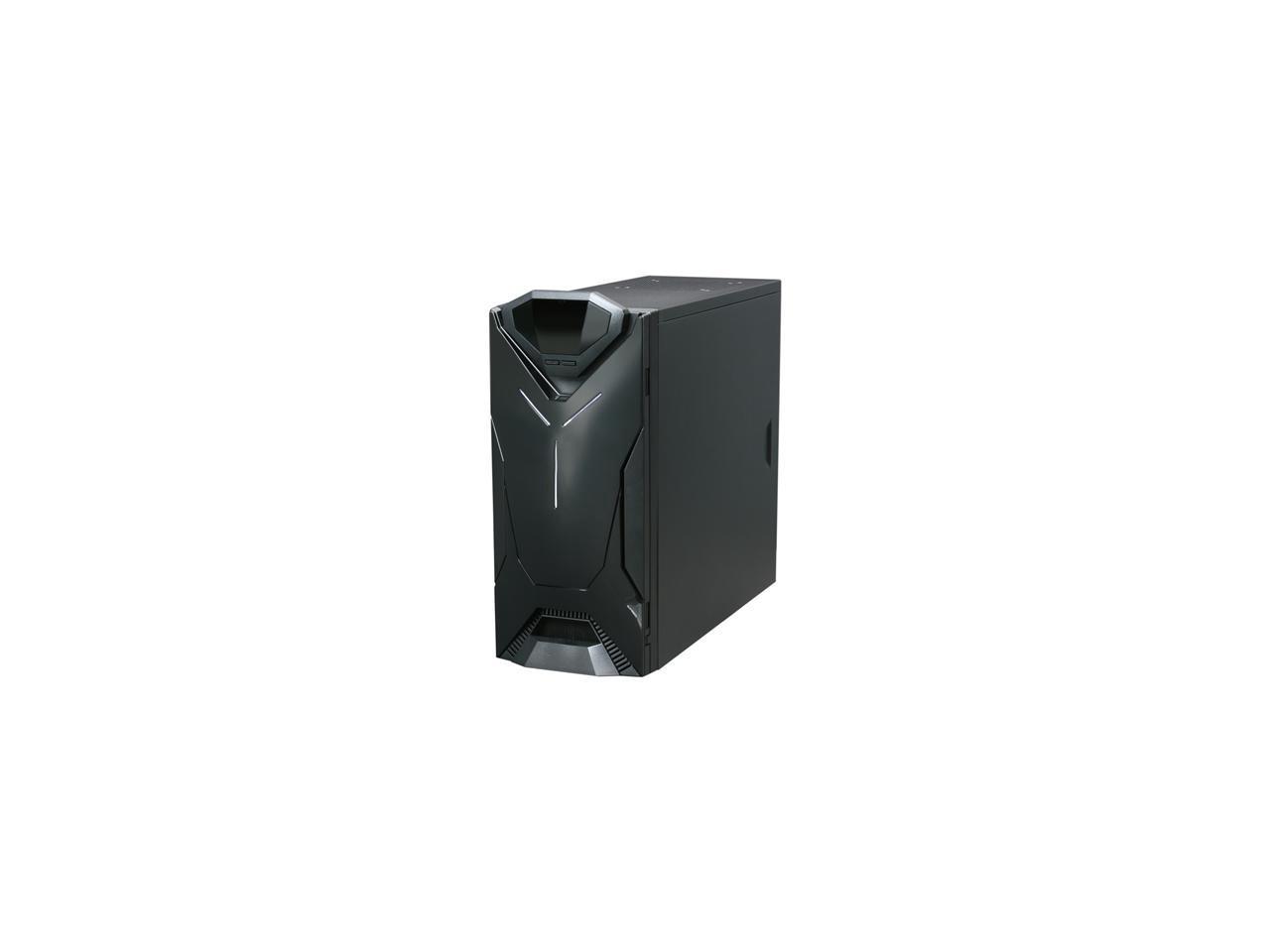 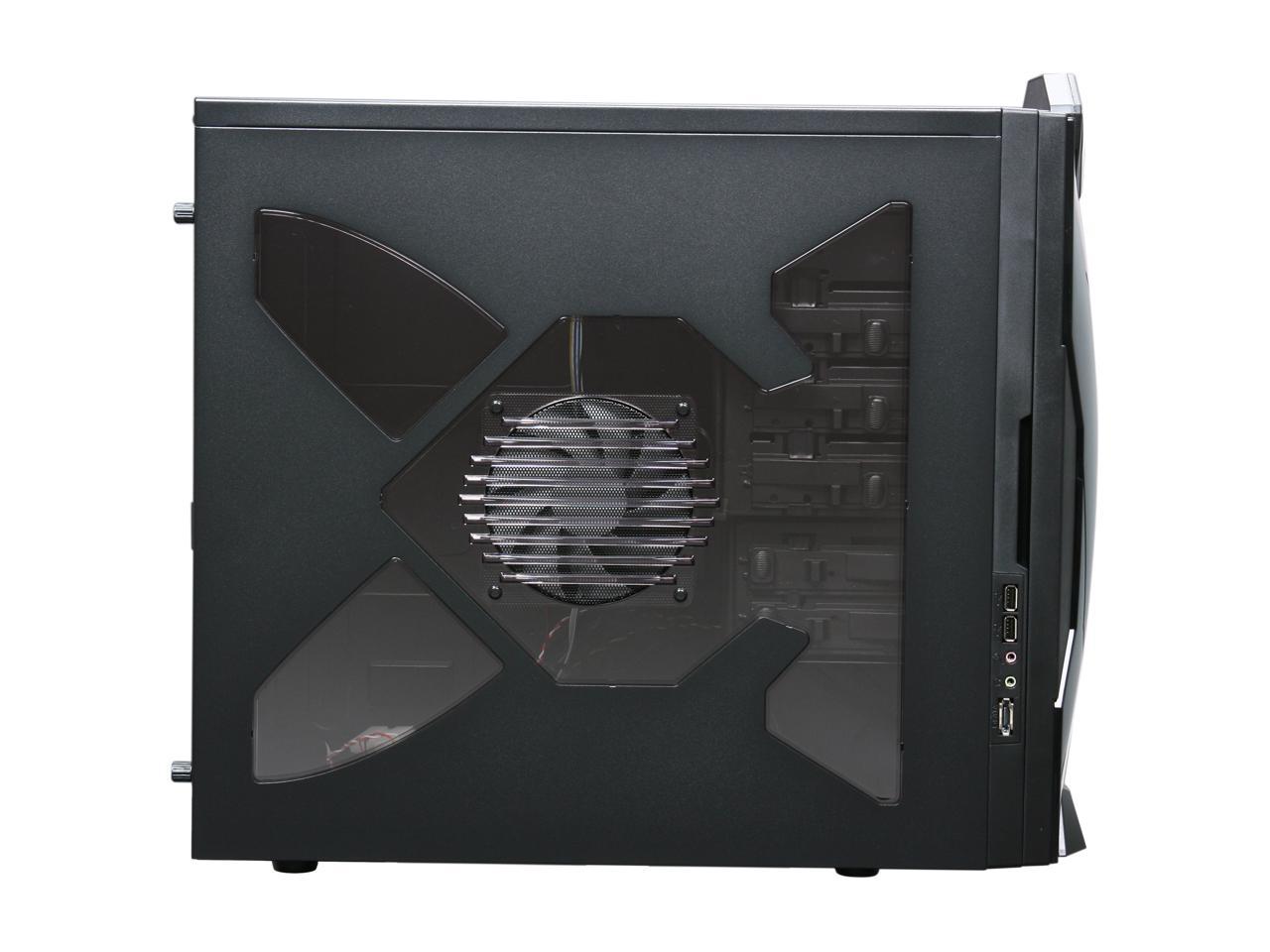 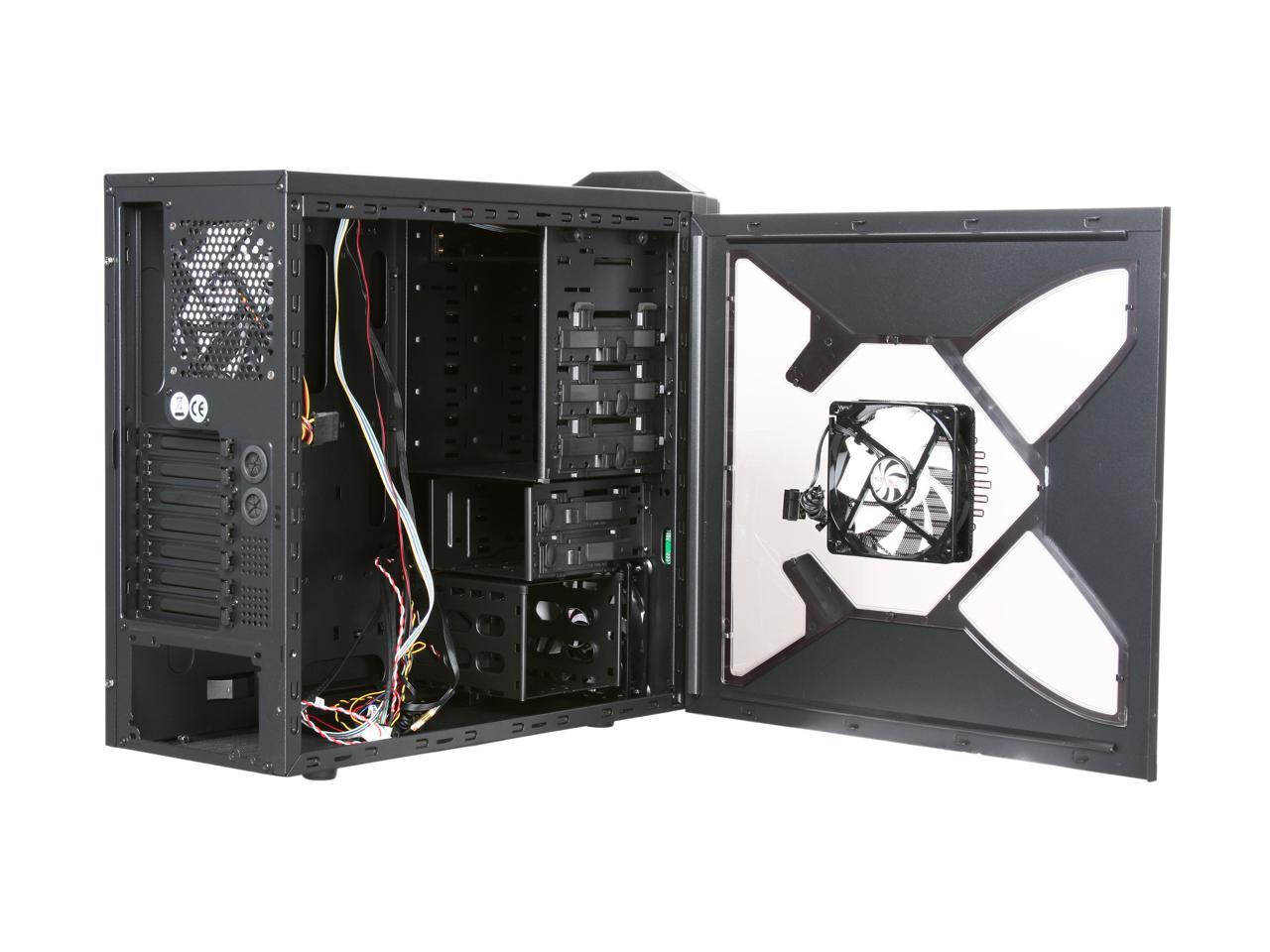 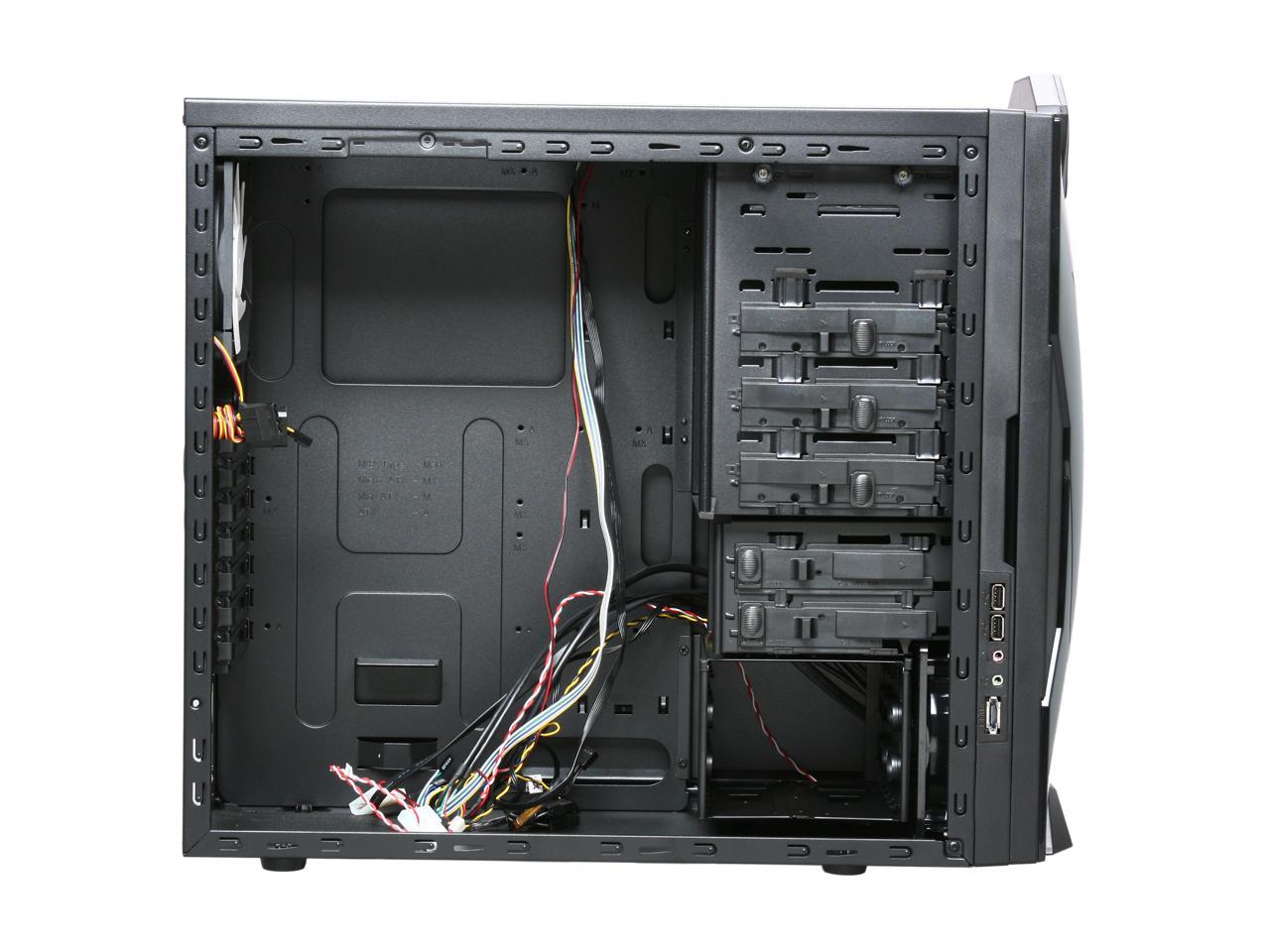 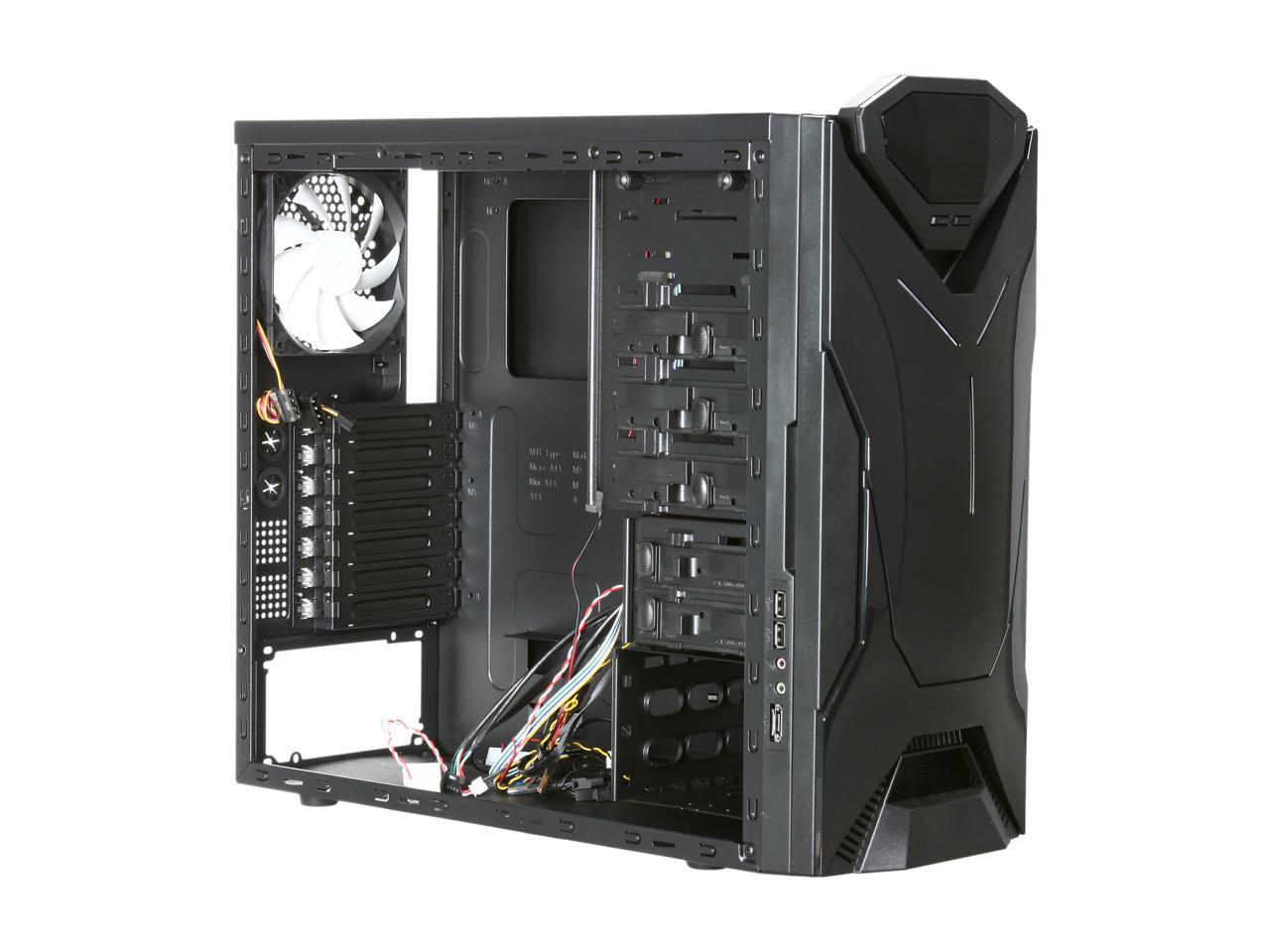 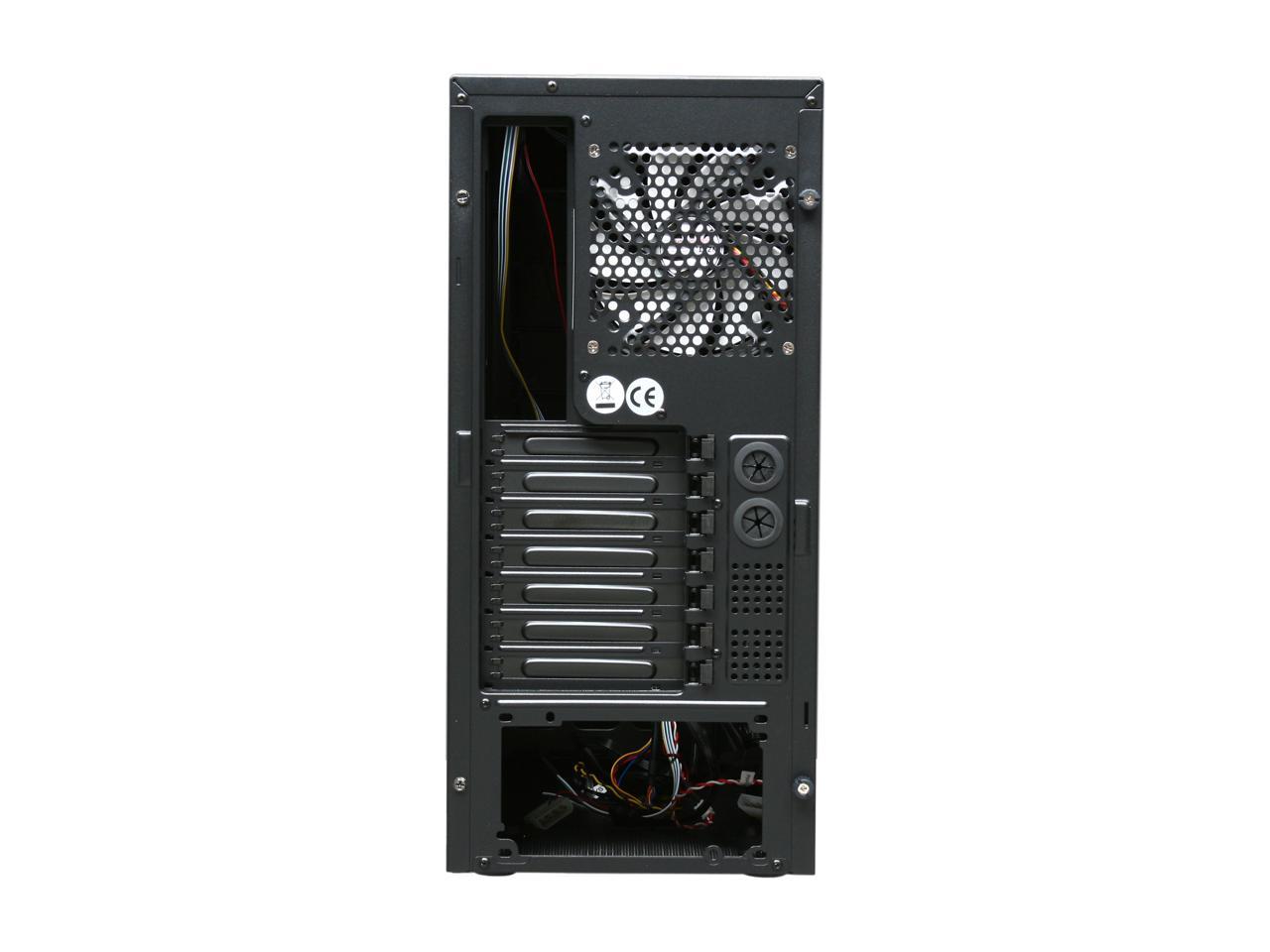 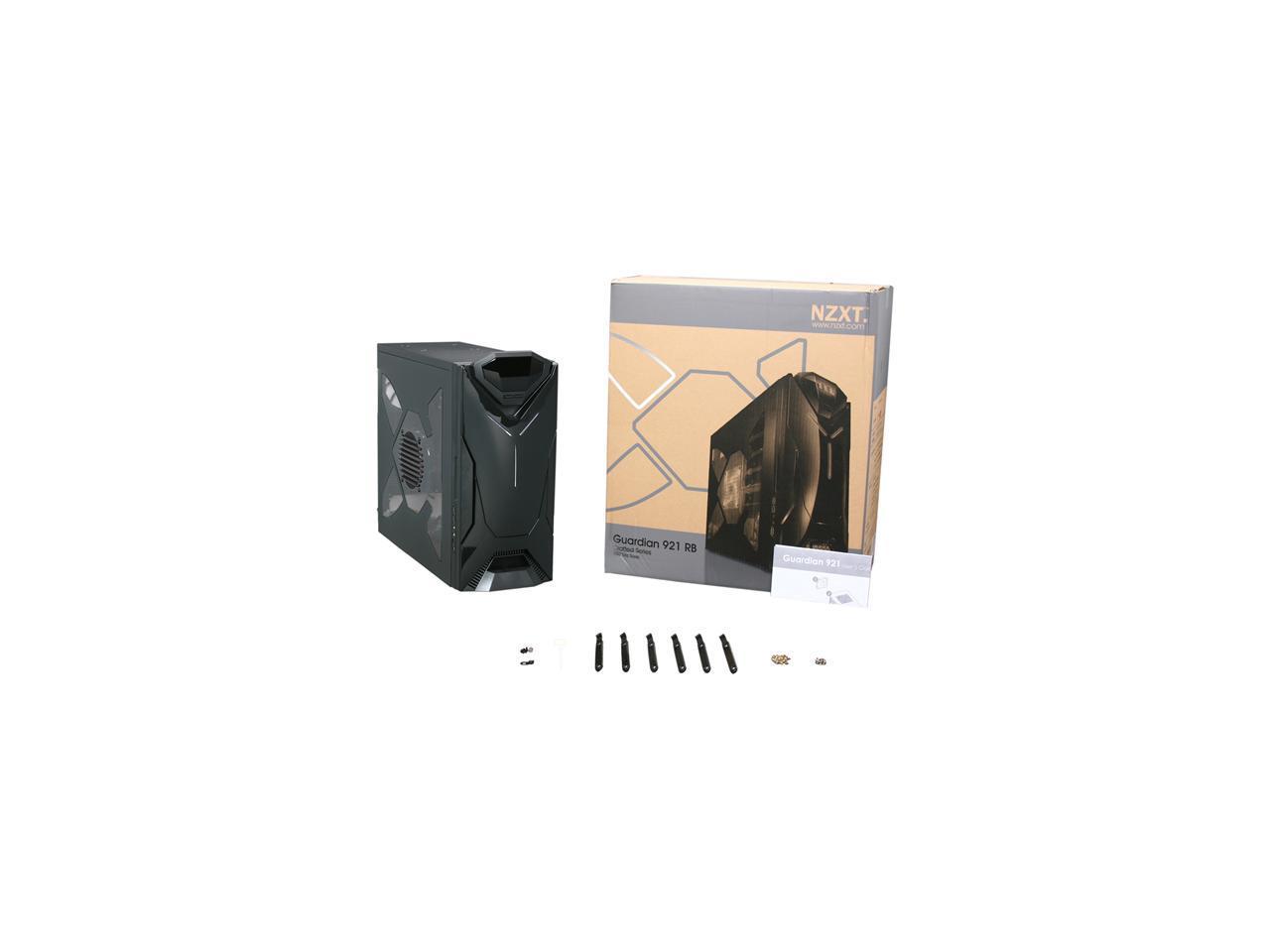 (218) Write a Review
OUT OF STOCK.
Overview
Specs
Reviews

Game beyond your limits with Guardian 921RB. Pros: I have no regrets in buying this product. It was really cheap, yet very sturdy and high quality. There is plenty of room for everything, the built in sensors update INSTANTLY (blow on one and the readout changes). It sucks they're in Celsius, but you I just looked up acceptable Celsius temperatures for my computer and everything was A-ok. Also it looks really cool, people ask me if it's an alienware all the time. Overall it is very high quality( mostly metal) and I would recommend it to anybody.

Cons: There is nothing wrong with this case. There are no situations where I had to improvise, or otherwise perform this build in an odd way. I had no case related hiccups during the build.

Overall Review: Been running linux on the completed computer for 6 months, no cooling problems. Buy this case it's unbeatable.

5 out of 5 people found this review helpful. Did you?
Manufacturer Response:
We want to thank you for being a customer of NZXT and we appreciate you taking the time to send your feedback and will continue to strive to make our products better.
DUWAYNE S.
Ownership: less than 1 day
Verified Owner
Unreal !!! Amazing !!! Sweet Case !!!3/4/2011 1:52:01 PM

Pros: Ok, All I can say is amazing... This case is Beatiful Flat black inside and out,with shiny parts in the right spots... Lots of room... Comes with 3 x 120mm's and I bought the 140mm by NZXT for the top exhaust... Lower drive bay removal is a sinch to add air flow,(four screws easily gotten to)...I plan on using only one HDD at the moment... Yes, the included instructions suck but everything is tagged and clearly labled... Even the standoff holes are stamped into medal as to what to put where, mATX/ATX... As for the temp sensors they are clearly labeled SSD/CPU/SYS,pretty self explanatory... Has built in MB speaker pre wired so no worries about needing the MB Speaker,(this is not mentioned in the discription)... I will be updating this review once build is done to report some temps and how well the build went...' At this point with this case I can forsee no issues what so ever... Ohh, my last build was 6 years ago...Wish I had had this case then... Simply Amazing...

Cons: As usual UPS beats the heck out of your boxes...The box for the Guardian did just that, Guarded it well... Other than a scratch in the clear side window about 2 inches long that had to come from the factory...The case is perfect...Reason I know it had to have happened in the factory is it is on the inside and had some plastic dust covering it to look like a smudge...Nope it's a scratch and being OCD as I am it is going to drive me nuts...But...No way am I going to RMA for this and delay this build... For some reason The Egg took a whole week to get this to me w/rush processing(they are refunding the 2.99..YaY >=)...Ordered Friday 02/25/11 just receaved today Friday 03/04/11... =(

Pros: This case is wonderful. Probably one of the most sleak thought out design and features. The fans are really quiet, there is plenty of room inside the case, (you just have to neatly sort the power cables and keep them together) plently of HDD Bays, CD/DVD Drive Bays, and 2 Floppy bays if you ever need to RAID drivers OR have a card reader and you want to put in you can. 1a. Like the USB/eSata on the side which is an okay idea.

Cons: 1a. (could be else where) BECARFUL of the plastic see through cover as it can be easily scratched by something and or break.

Overall Review: When you recieve this case you will notice a few things. The sweet front look of the case with the plastic still on it and you have yet to take it off. The sweet clear seethrough side panel of the case with its plastic still on it. - The expansion slots seem to have the most problem with a lot of people and I dont really understand why. So heres my tip: when you get the case there should be a white box inside. There are some screws you can use for any large PCI cards for you. There the silver ones. The way you release the plastic lock is to press firmly onto the tredded button from the inside and you should notice it release and pull it out, from the other side. Do the same for the other slot as well to fit your double sloted GC(Graphics Card) then insert the card and screw it in to the case. leave the plastic locks out or you may risk on either popping them out or break them. But you can use these locks on smaller cards (Sound cards etc.) Please take my word for it! Thanks

Cons: I would have liked to have seen the whole inside be lit up like it is in the picture. After receiving it I was disappointed that I would have to buy separate LEDs to view the inside. Furthermore the side panel that is transparent is quite poorly made. Just setting it against the case when I was building made it scratch. It is nothing more than cheap plastic. This is my first case with a glass panel so I am not sure if it's standard for cases.

Overall Review: The case is amazing especially since it costs a measly 70$. It looks quite nice and it's built very well. Be sure to buy separate case LEDs from NZXT if you want that glowing effect.

Pros: This is a great case for gaming in this price. Its feels really solid and doesn't feel all flimsy. Has great airflow and good features all around a solid budget case. Plus it looks awesome!

Cons: The biggest con and really the only con i can think of is cable management. It doesn't have cut outs for routing cables behind motherboard but the space between the motherboard and the side isn't much. you really need a modular powersupply to make it work. I don't have a modular psu unfornately. My cables are also mesh and i have alot! of cables. So my cable management wasn't so great i'm going to have to rework the whole thing. If you have a modular or a psu with not alot of cable then this may not be a con for you. is kinda lame that they could of made the case half an inch thicker to make cable management alot more manageable for all. thats why i took the egg off.

Overall Review: So far i'm very sastified with this case besides the whole cable management part but like i say may not be a problem if your psu is modular. The case looks great and unlike some reviews people had problem with the fan lights going dim. I do not have that problem and also the light on the fans aren't really that bright but it still looks great! so i don't see that being much of a problem. also don't buy this case for the temp monitor thinking its 100% accurate its not going to be 100% accurate but it does come probably 3c off actual temps depending where you place the probes. SO it will let you know if your cpu is overheating. Its very useful. Its a great feature and works very well for what it's meant for. oh yeah did i mention it looks awesome?

2 out of 2 people found this review helpful. Did you?
Manufacturer Response:
We want to thank you for being a customer of NZXT and we appreciate you taking the time to send your feedback and will continue to strive to make our products better.
Anonymous
Ownership: 1 month to 1 year
Verified Owner
Great Case6/13/2012 11:25:00 AM

Cons: Virtually none. The only thing that comes close to a con is that the temperatures aren't dead on accurate but that's to be expected and they are only 1C-3C off.

Overall Review: Definitely worth every dime. I'd buy another in a heartbeat. This was also my first build. Everything fits perfectly and I'm fairly sure it would fit a larger GPU. I have a GTX 460 which is only about medium sized.

Pros: Good Cable management-- so many inexpensive cases do not have space for cable management. Comes with three quiet blue-LED fans and has space for another 120-140mm fan on the top. The side window has a a really neat shape. The intakes have filters Screwless drive bays The temp LCD is a nice touch The whole case looks really nice and has mostly good build quality, especially for the price. Nice front panel USB and audio placement, if you keep you tower up on your desk like I do. Keep in mind the ports are on the left side though, so you probably couldn't put your tower to you left very easily, unless you wanted to run your headphone cable around.

Cons: The plastic fasteners for the expansion cards don't secure the cards very well, though I used to screws anyway, so maybe that's how it's supposed to be. Also one of the aforementioned "plastic fasteners" broke off when I was fiddling with it, but it in no way effects the function of the case, and it breaking off may very well have been my fault, so I won't take an egg. This isn't much of a con, but the side intake fan comes extraordinarily close to hitting my HD 6970's power connectors-- like there's hardly a centimeter to spare. When I originally installed the side the fan was buzzing a bit because the +2 connector on the 6+2 fell into the fan. It's certainly not not a major issue, but keep that in mind if your card has its power connectors on the side.

Overall Review: I bought this case as an upgrade for a very cheap low-end case I had that was starting to warp under the strain of all my parts. Also, I had no idea how to install the temp. probes and the case documentation didn't say how, though I looked it up somewhat easily. I had no idea you literally tape the probes around inside the case :P