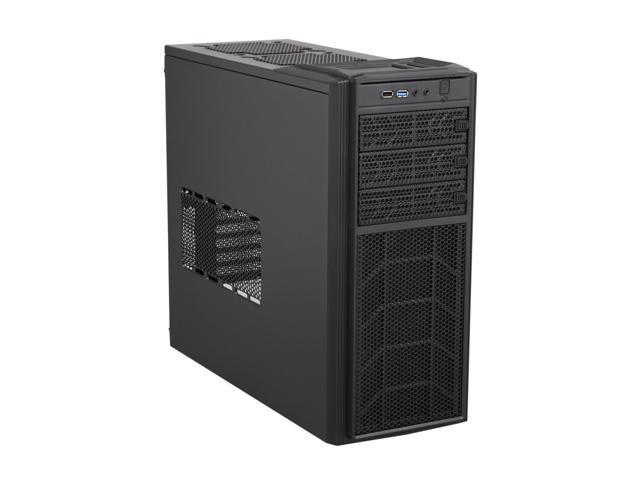 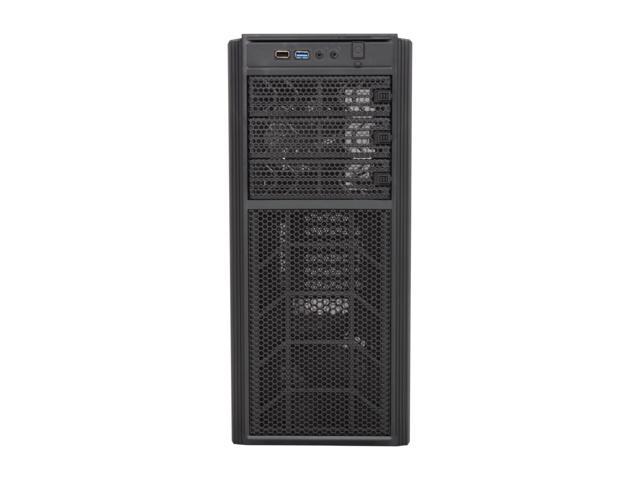 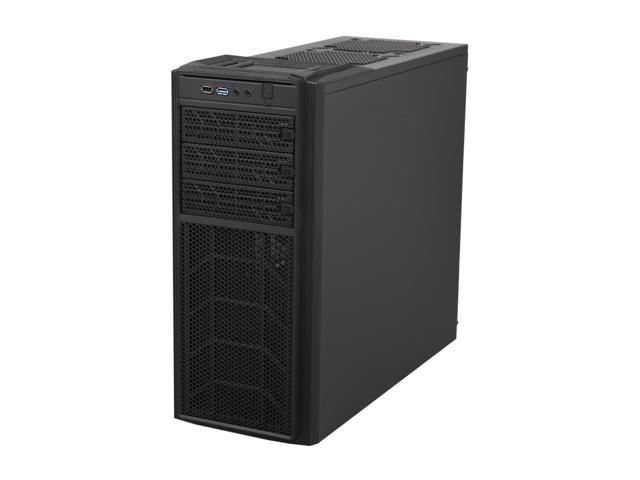 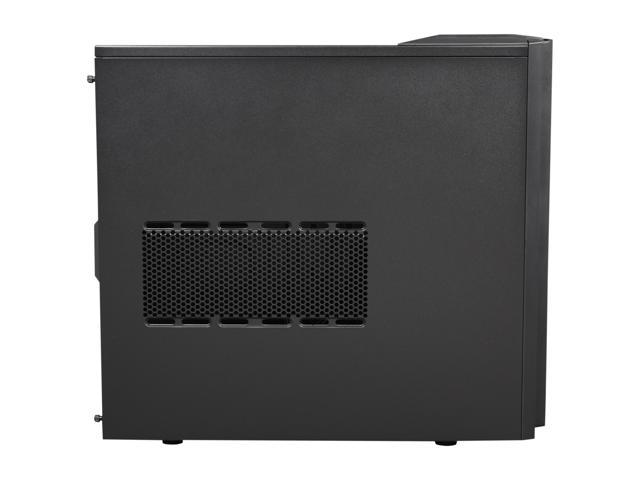 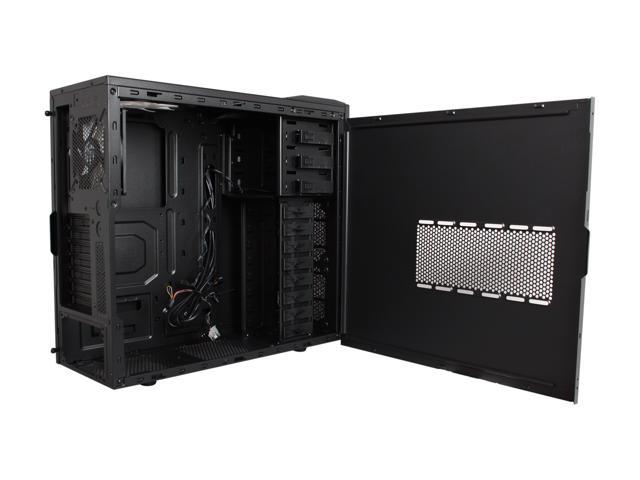 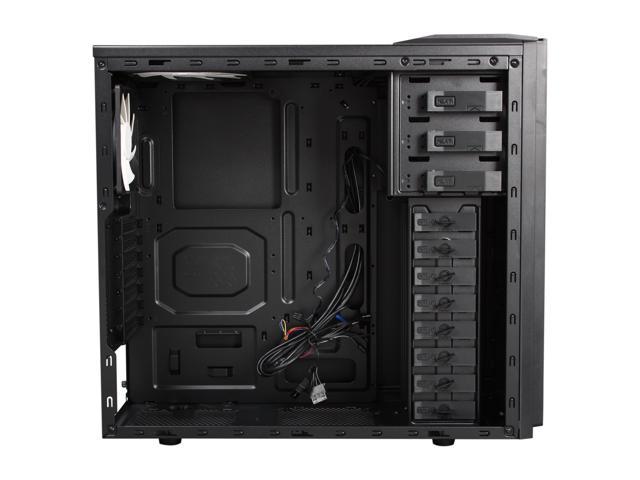 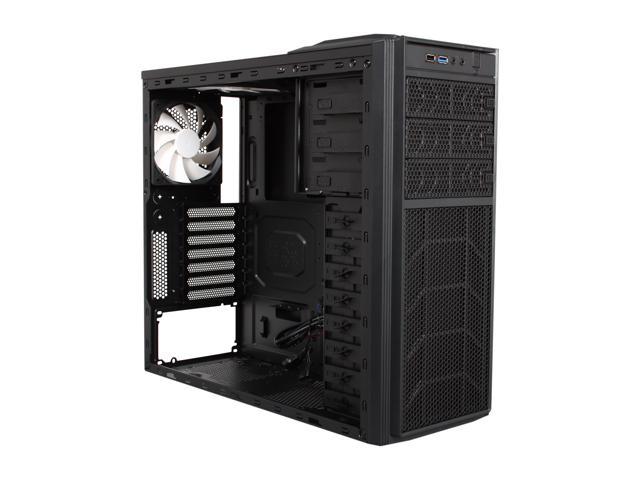 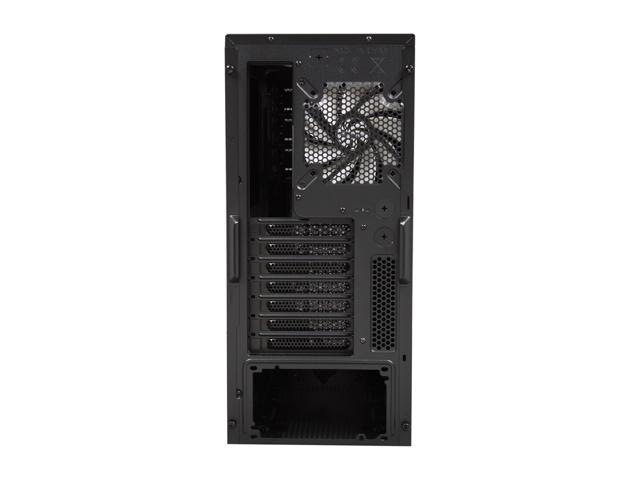 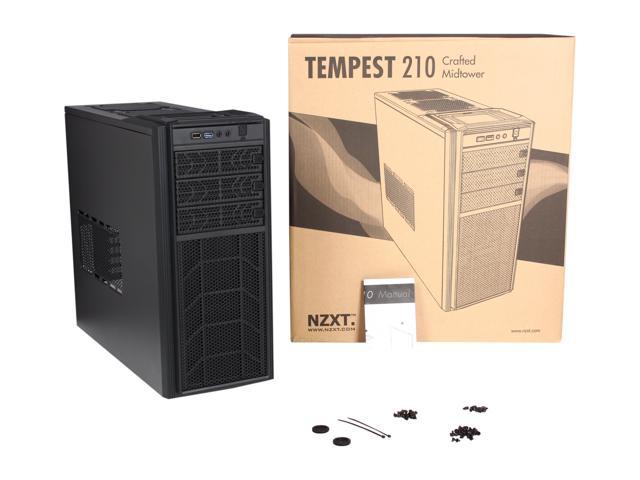 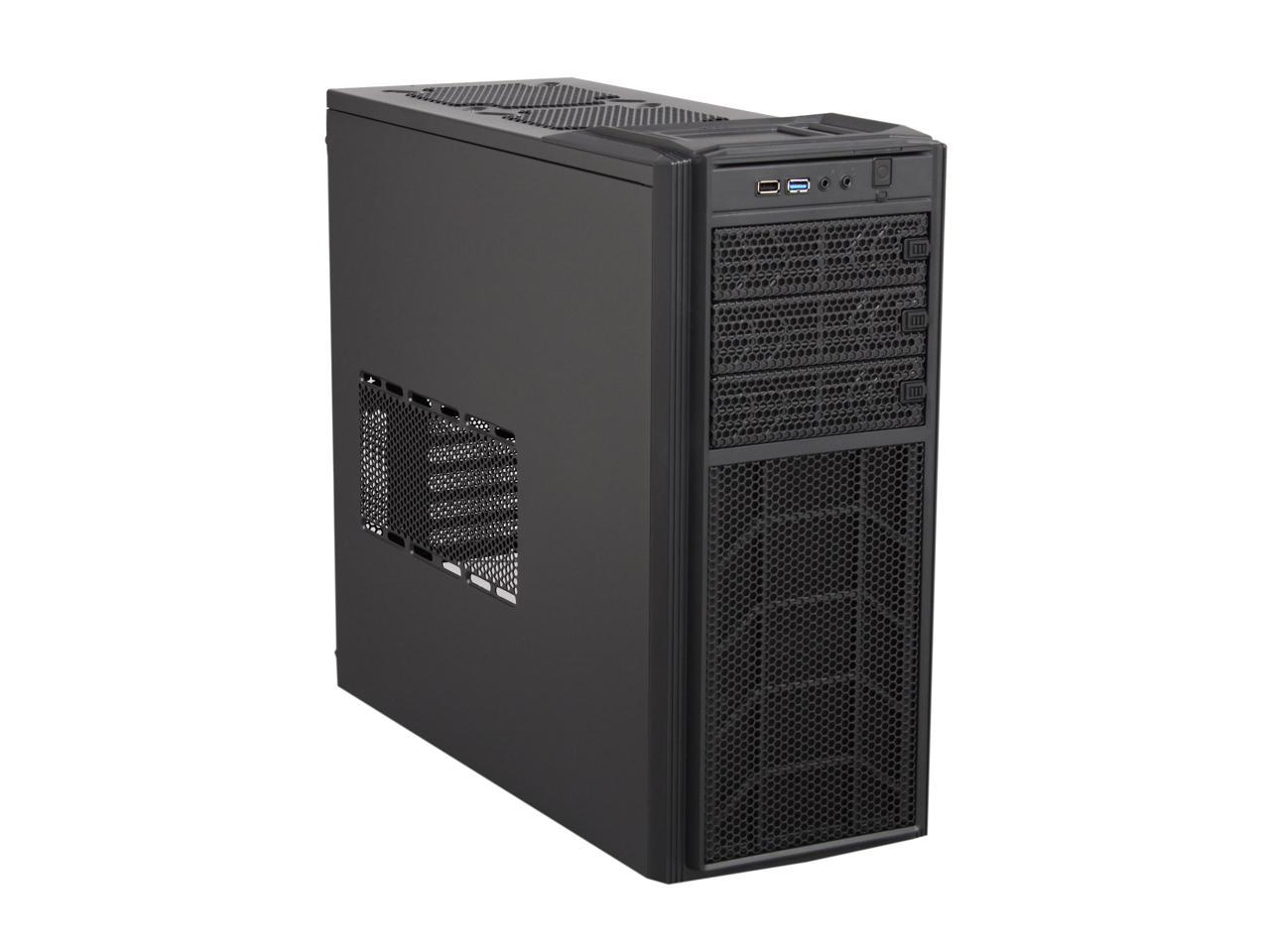 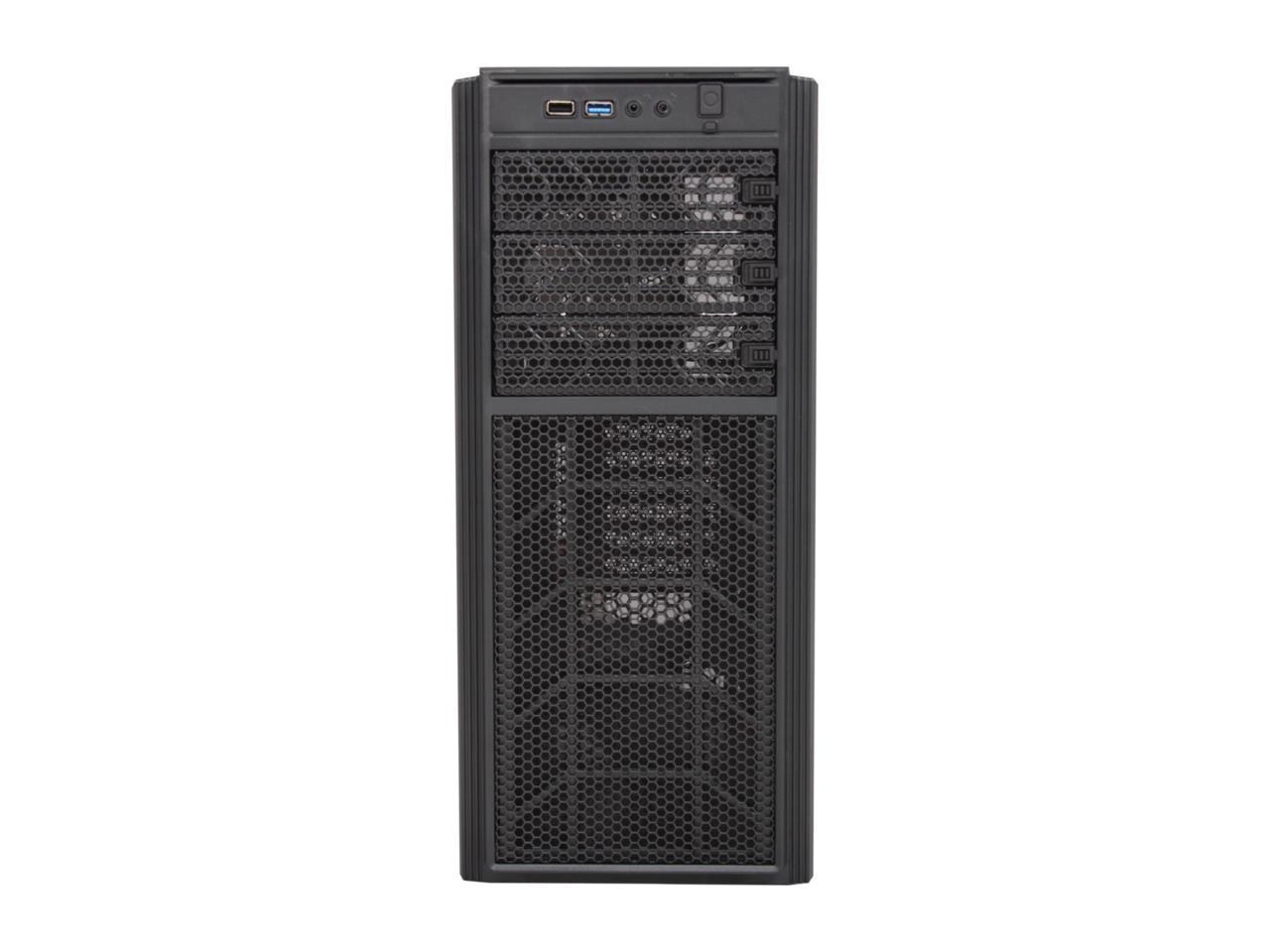 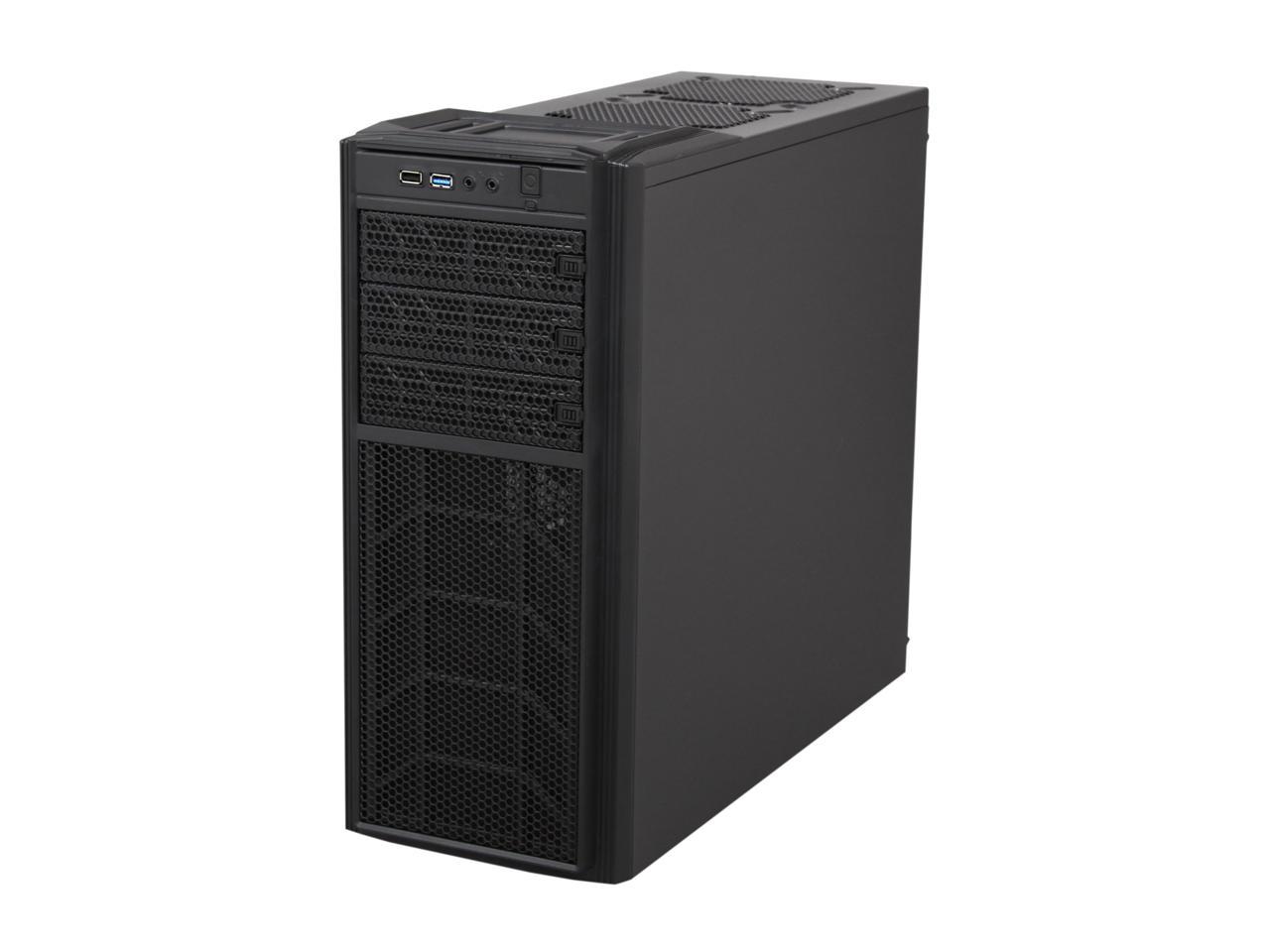 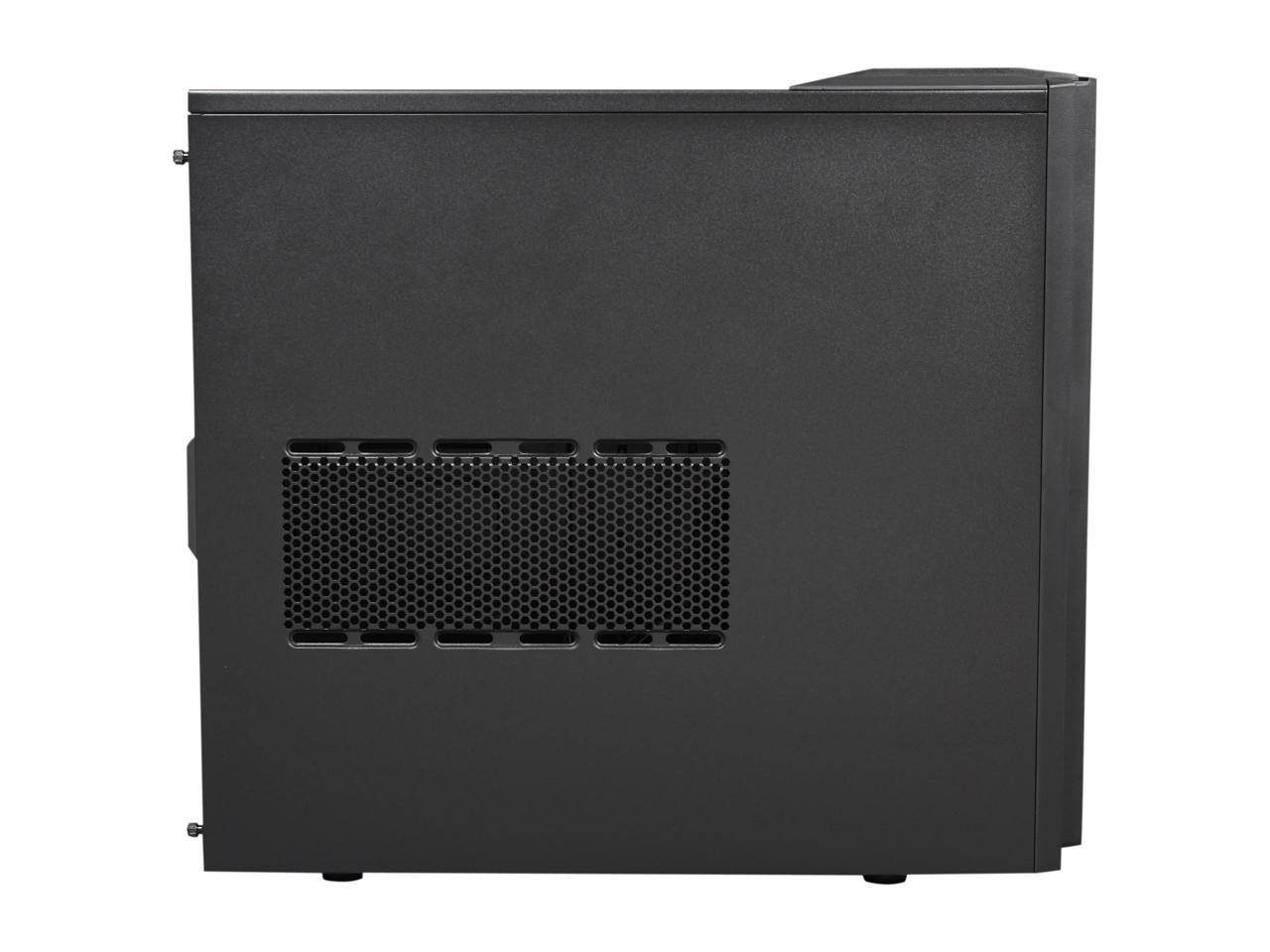 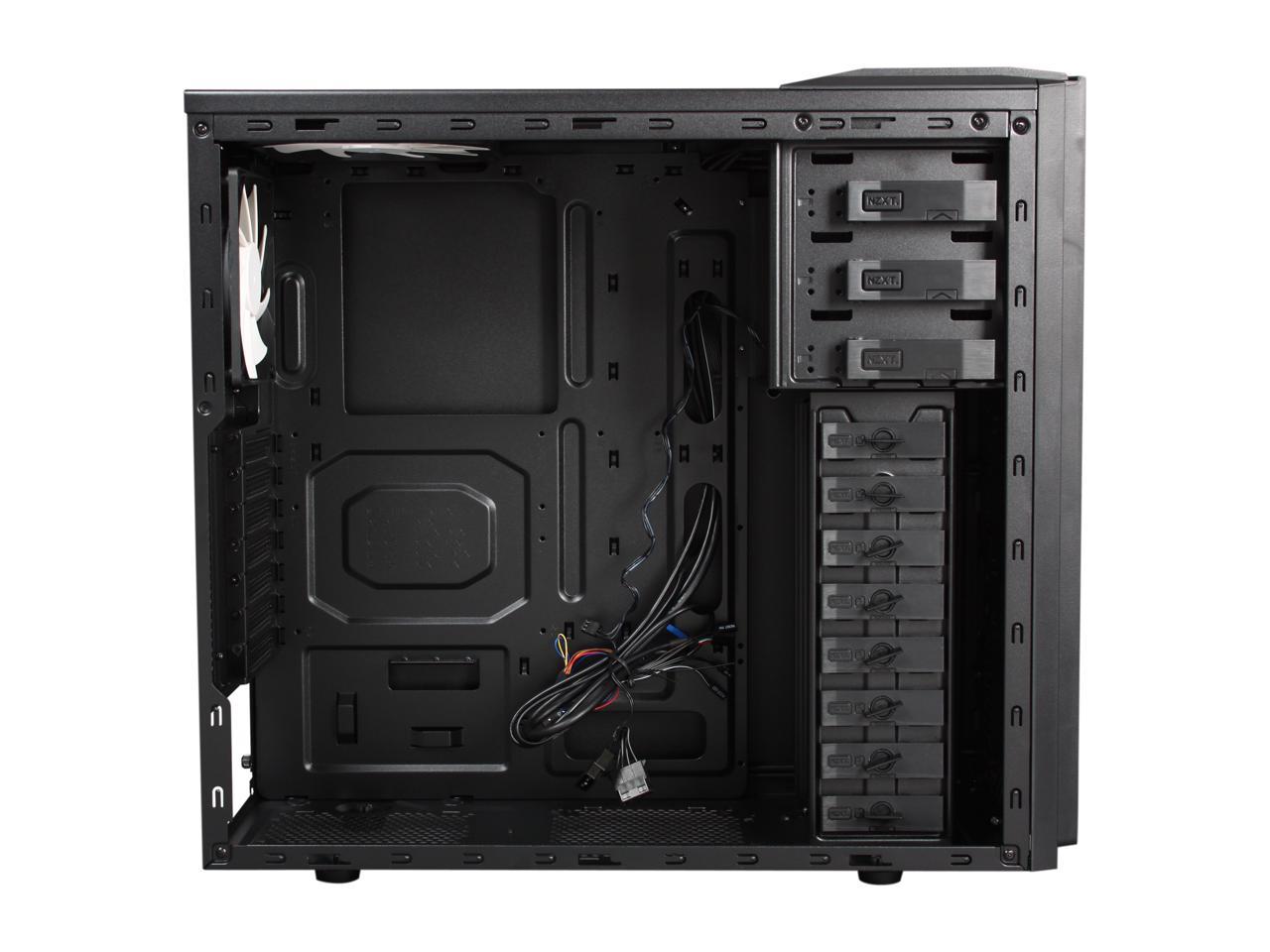 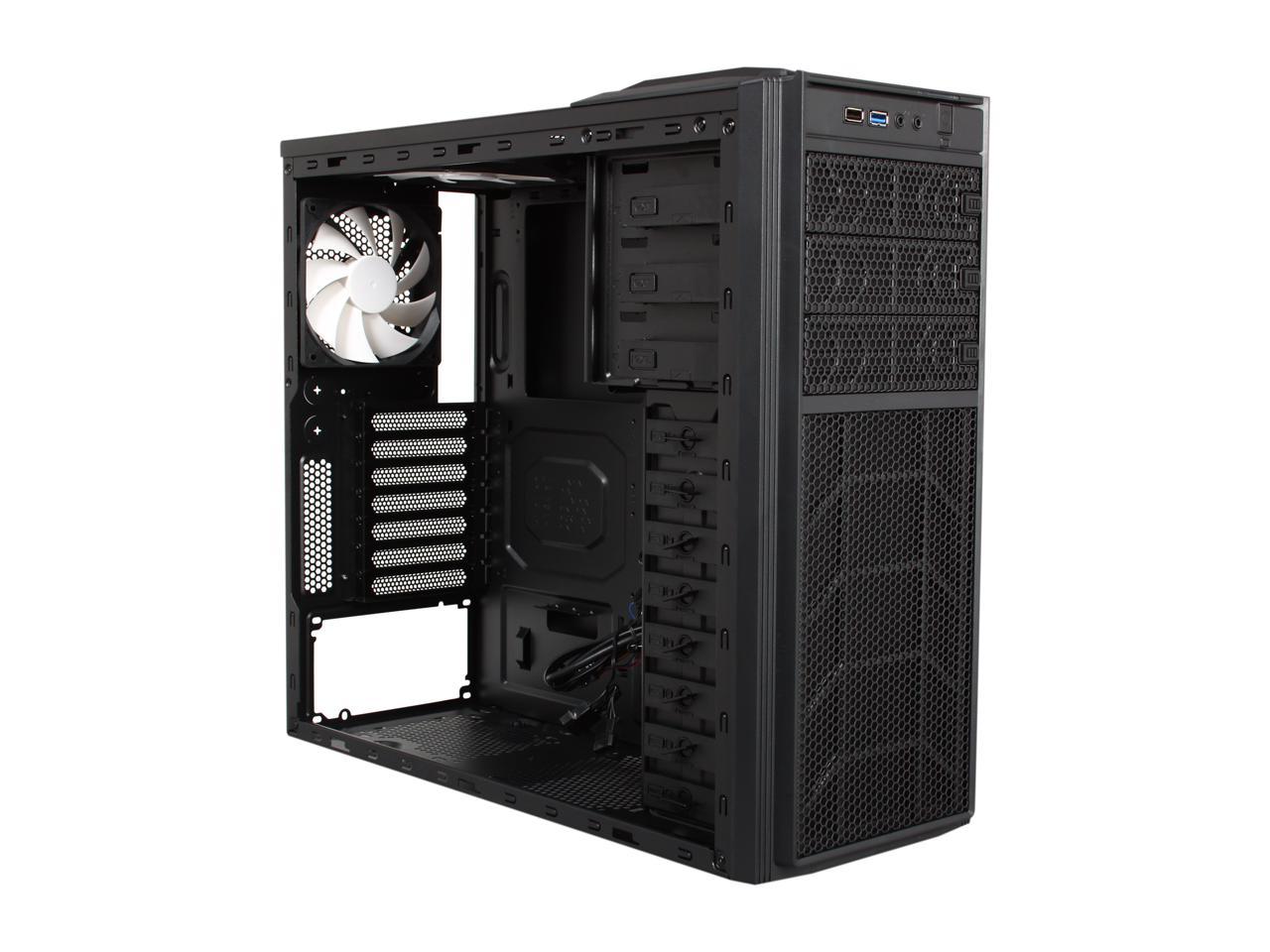 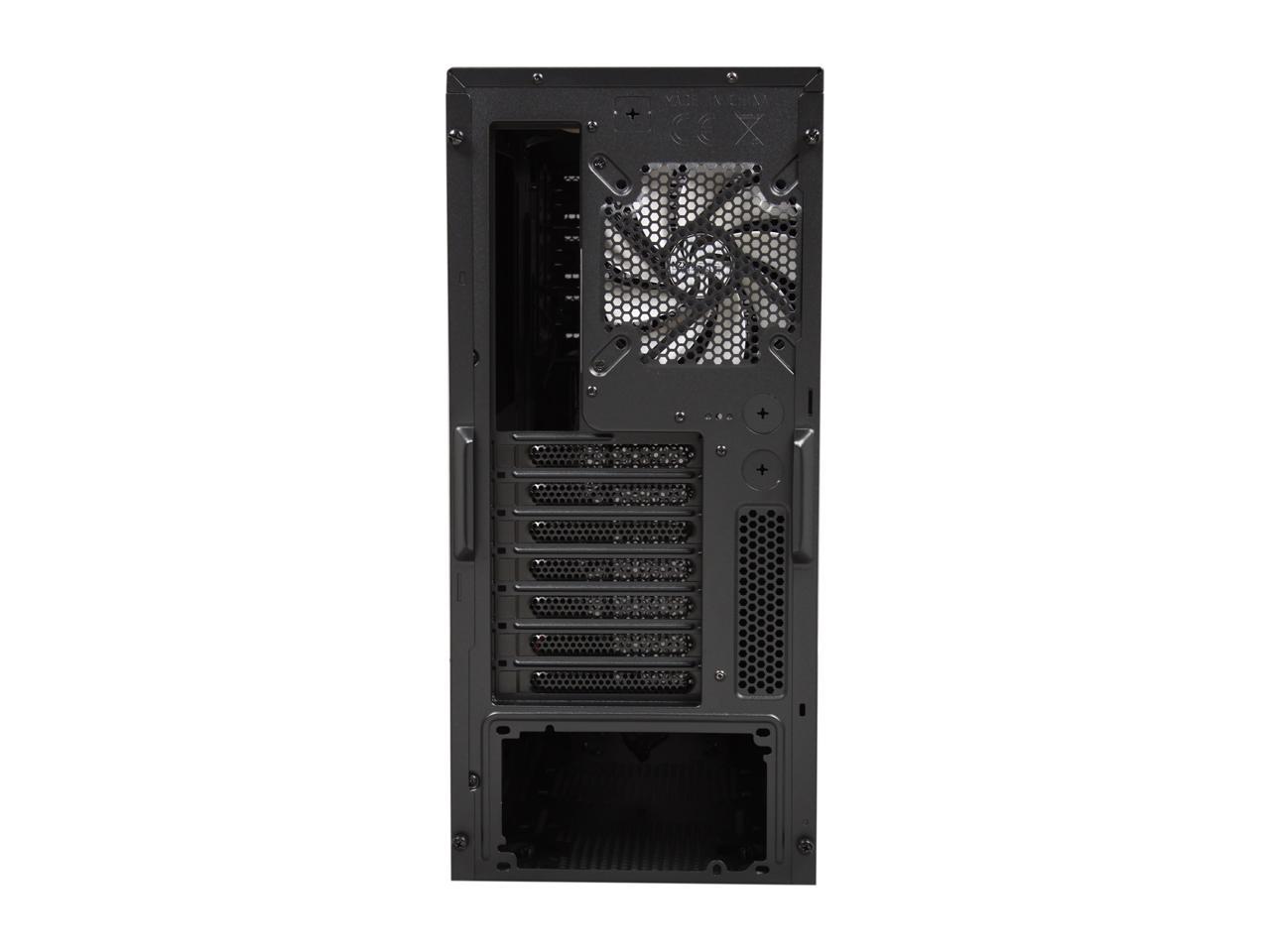 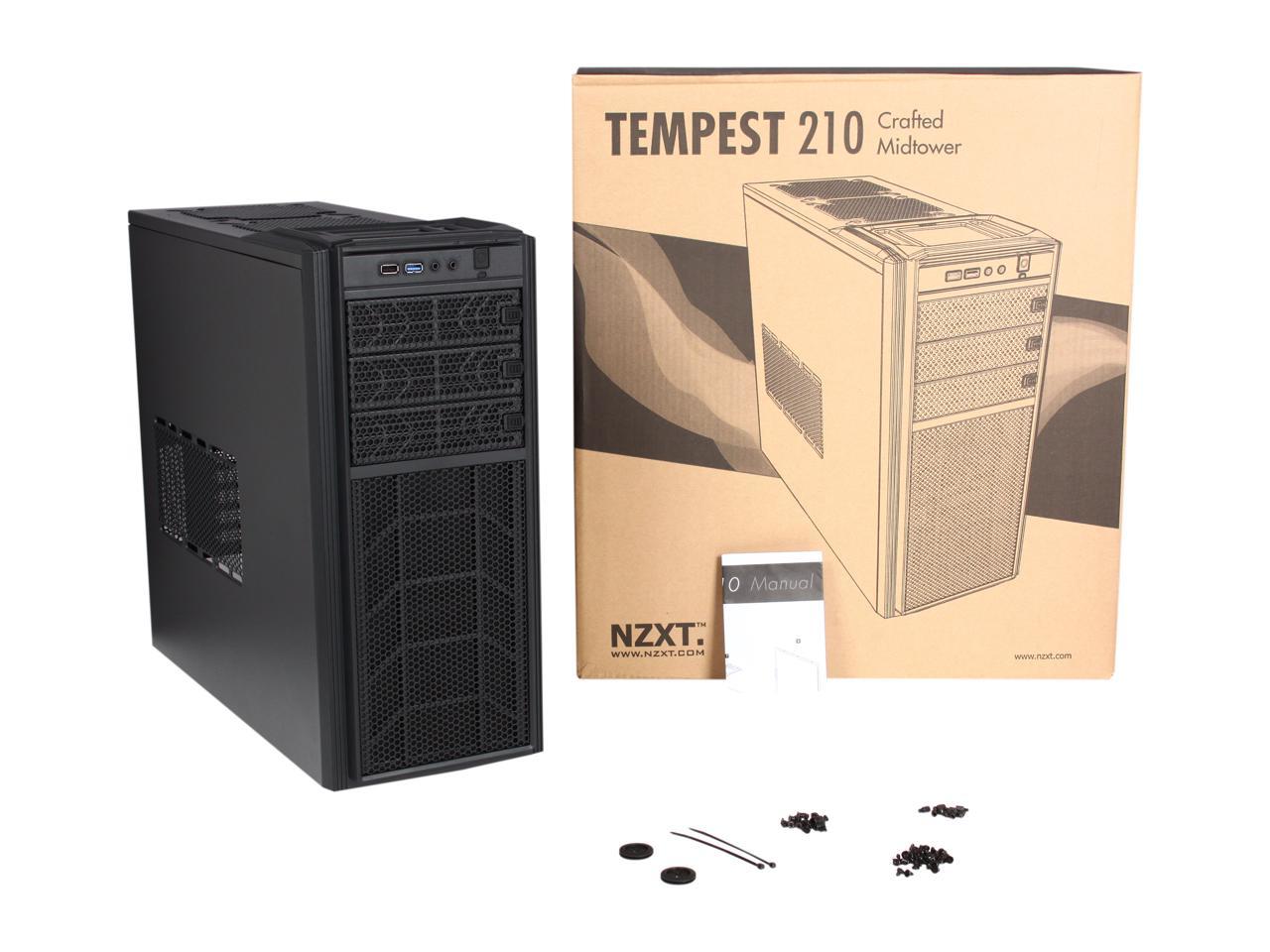 (77) Write a Review
OUT OF STOCK.
Overview
Specs
Reviews Let's face it - gamers' rooms get extremely hot. Between your monitor and intense 1v1 matches, your entire environment is trapped with heat. This becomes problematic because not only are you affected but your PC is in danger as well. All that raw power needs to be contained and cooled. The Tempest 210 is the ender to your heat issues with its mesh design. The massive mesh design maintains a constant stream of fresh air inside your case while keeping the hot air out. As a bonus, this case has the capacity to mount up to eight fans with the ability to change positions on the side fan. Get rid of your heating issues by investing in the Tempest 210 as the master of chilling. Pros: If I wanted a space ship for a PC tower I would have ordered parts from NASA. What makes this case so great is how inexpensive it is but how great the design quality is. Amazing air flow. Simple yet spacious design. No sharp edges. When I was buying this tower I was debating to go with a full tower or this. Well I'm glad I bought this because I realized, "Why the F would I need a giant case that costs upwards of $100 when everything fits in this case?" Do yourself a favor, unless you're set on a full tower, get a mid tower. NZXT did an amazing job making this case simple yet loaded with all the enthusiast features you could desire at an unbeatable price. 1) It isn't a space ship 2) it stays COOL 3) Its very light (~15 lbs) 4) Has plenty of 3.5" - 2.5" bays 5) Design is simple and satisfying 6) Sturdy and rugged (97% metal 3% plastic) all you could need out of a gaming tower without all the extra bull-hockey ;)

Overall Review: It doesn't come with a dust filter for your PSU, however I'm not a helpless buffoon. I can fashion my own dust filters. So unless you really have a negative persona there really isn't anything wrong with this case. Its an impressive case.

Pros: Case itself looks really nice. I like the LED light in the front when it's on. The screw-less slots are a bit of a pain to work with, but they aren't a deal breaker at all. Roomy enough for my cable management.

Cons: One of the fans that came with the case had a frayed wire, making it useless. Now I have to get a new one or see if NZXT will replace it for me (i already built the computer so i can't send it back).

Overall Review: Other than the fan issue, it's a great case. I might buy NZXT again, depending on how I resolve the issue with the fan.

Manufacturer Response:
Hi Jasper :) first of all thank you for choosing NZXT! we appreciate you as a customer and would love to help you out with the defective fan in your case. please contact us through our support page.. www.nzxt.com/support/ and we would be more than happy to replace this fan for you free of charge. we also have live chat available from 9am to 6pm California time :) We look forward to hearing from you Best regards, NZXT TEAM
Michael F.
Ownership: less than 1 day
Verified Owner
Intelligent Design3/6/2012 3:03:28 PM

Pros: Having built well over a dozen PC's in the last 15 years or so, I know a good case from a bad one. This is a good one, especially for my purpose, which is a dedicated machine for Folding@home. That requires good cooling of two graphics cards, while not neglecting the CPU on which I will be running BOINC/World Community Grid. In addition to the top fan, this case has vents for not one, but two side fans; very nice, though I probably won't need both. However, one of my gripes with cases is that the side vent is often placed too high, so that the bottom graphics card does not get much air flow. At first, this case appeared to be the same way, but when you see that the power supply is on the bottom, it is clear that the side fan will be in exactly the right place. And while there is a place for a front 120 mm fan, that is mainly to cool mechanical disk drives, and won't be needed for my build, which will use only an SSD.

Cons: Since Newegg expects a Con, I will mention that a couple of the screws in the rear were stuck. So I had to use pliers on them, with a towel to ensure that they were not scratched, to remove the side panels. Probably the paint got stuck.

Overall Review: I always cringe when shopping for cases, since I am past the point where Darth Vader spaceships have any appeal to me. And the stupid things they do with case designs are amazing. USB ports are put in ridiculous places; vents are not where they should be, the fan sizes are wrong, etc. This one is very intelligently designed, in the U.S.A. I might add, though of course made in China. But everything fits well, and it has a good finish. At first, I thought that the lack of 3.5 inch external drive access was strange, but then I realized that you don't need it. It just wastes space inside the case, which could be better used for more 5.25 inch bays. If you need to use a 3.5 inch flash reader or whatever, you can usually get an adapter to fit the 5.25 inch bay, but you can't go the other way and widen the 3.5 inch bay. It is another example of the NZXT designers not following the herd but thinking about what they were doing, which is always an unexpected surprise.

Overall Review: I have this case full, 8 1TB drives in a hardware raid 5 using an LSI MegaRAID 8308ELP. The card with 8 drives and two fans up front fit snugly, but they fit and there is good air movement so i'm happy.

Pros: Looks great, not overly obnoxious...I'm done with LEDs and side panel windows...so 90's right? Case is well thought out, cable management is great with plenty of room behind the mobo for excess cables, and it is very quiet while still moving a ton of air through the case. Stock fans make very little noise. I removed the 140mm top fan (seemed like overkill in my system) and put another 120mm silent fan in front for my HDDs. Temps stay very cool and the only thing I hear are the HDDs spinning up and the Cooler Master EVO 212 when I'm encoding movies w/CPU at FULL load. Would absolutely purchase this case again.

Cons: Not a con, but I think I'm retarted or something because the USB 2.0 cable threw me for a loop for a minute. It's only got ONE 2.0 port up front and ONE 3.0 port. I've only ever had cases that had a connector for TWO USB ports up front. This made me think that the 4 pin cable for the USB 2.0 was a mistake, but it's only because it's ONE port DUH! I felt pretty dumb after I realized this...

Overall Review: 12V 8 pin cable was a pretty close reach for my PSU. I ran the cable behind the motherboard tray for cable managment and it BARELY made it. I'm using a SeaSonic S12II 520W PSU and an ASUS P8Z68-V Pro Gen 3. It did reach though, but I had to bend the cable a little more than I would have liked.

Overall Review: This is an excellent case! and the price makes it ten times better. The two fans included are REALLY REALLY QUITE and it keeps all my components cool. I would recomend this case to anyone this beats some of my friends Coolermaster $100+ cases. Rock on NZXT!

Pros: It came with everything required, the all black construction works well with any color theme, It feels pretty sold. Front USB 3.0 is a HUGE plus, remember to buy a Motherboard that supports it.

Cons: Needs more cup holders. The water cooling grommets are kinda loose. I am not using them though.

Overall Review: I haven't built a computer in a while so I did some research and came upon this case, for the price it can't be beaten. ASUS M5A99X Athlon II X4 3.1Ghz GSkill Ripjaws 16GB DDR3 1333 Sapphire Radeon HD 6850

Pros: Similar to the other positive reviewers. The case seems plenty sturdy to me, with plenty of screws provided. There is a front air filter. The fans are very quiet.

Cons: The manual consists of pictures and parts identification in many languages--it is not very helpful.

Overall Review: Some hints from a 1st time builder: 1) The correct locations for the motherboard stand offs are labeled for different styles of motherboards (ATX, MATX, etc.). The labels are difficult to see since everything is painted black--look closely. 2) To remove the front air filter, bend the filter NOT the holding clips. The clips don't bend and you will break them. 3) The connector to the power LED are marked + and -, but the HDD LED connector is not marked as clearly. The small triangle is the POSITIVE side. 4) All of the no-tool mounts for the 3.5" drives are shipped on the right side. Take one from the right side and use it on the left if you don't want to use screws on the left side.