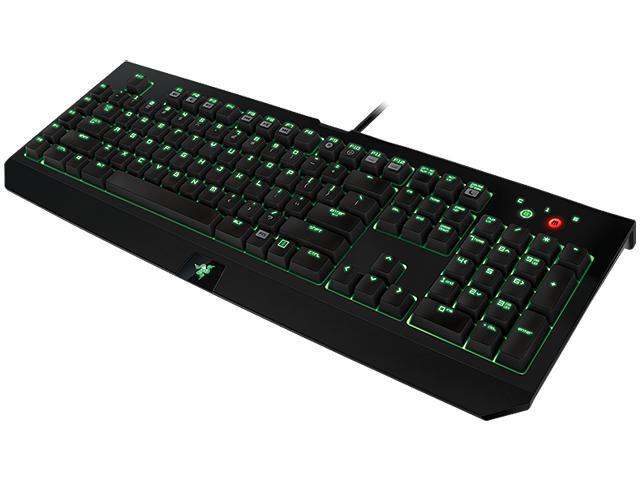 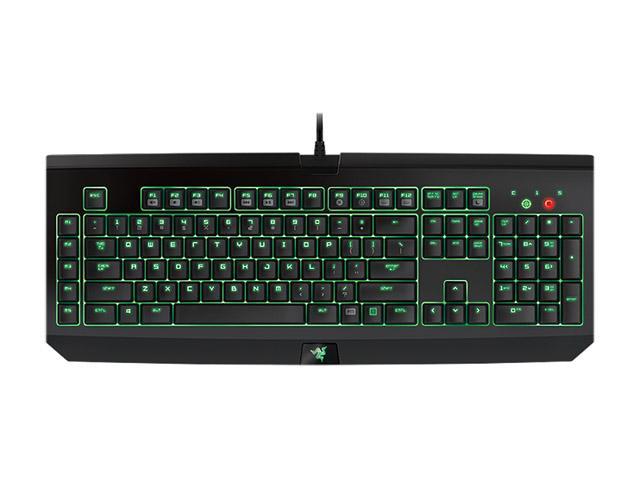 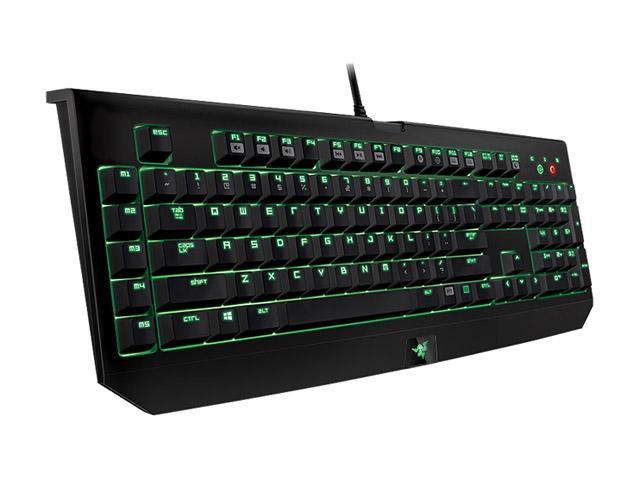 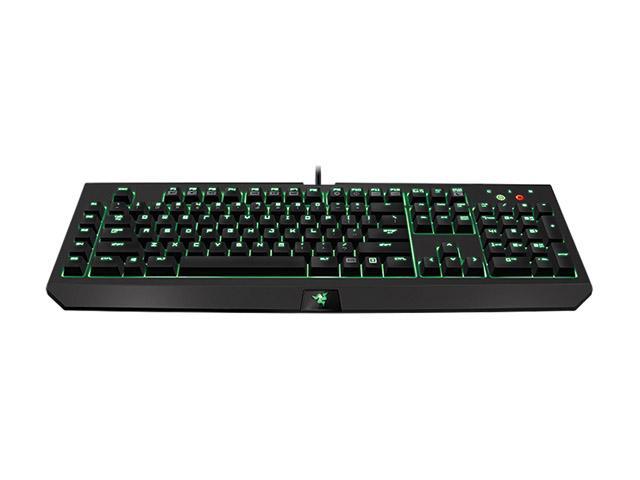 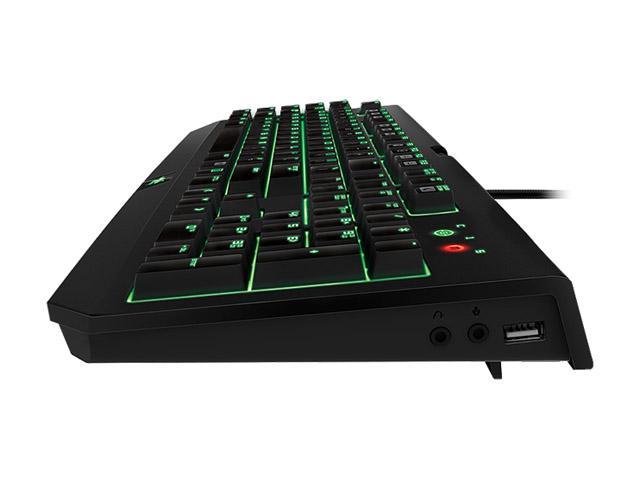 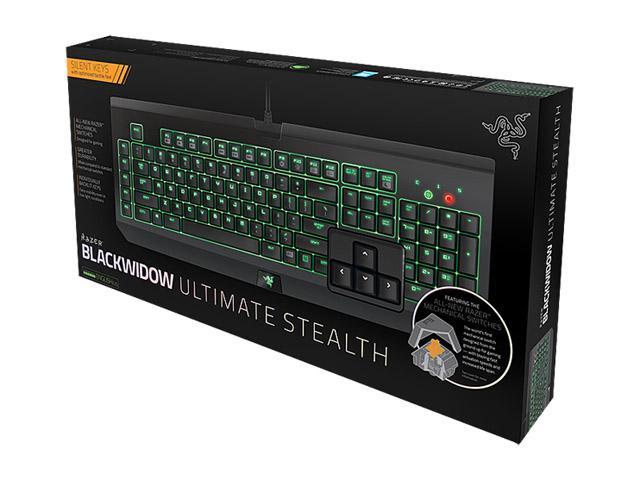 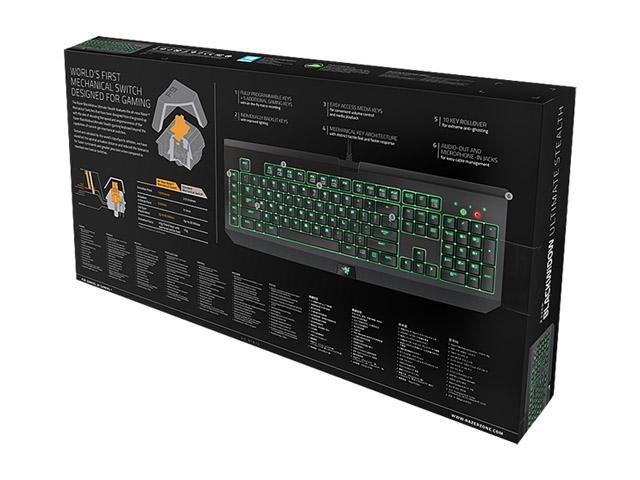 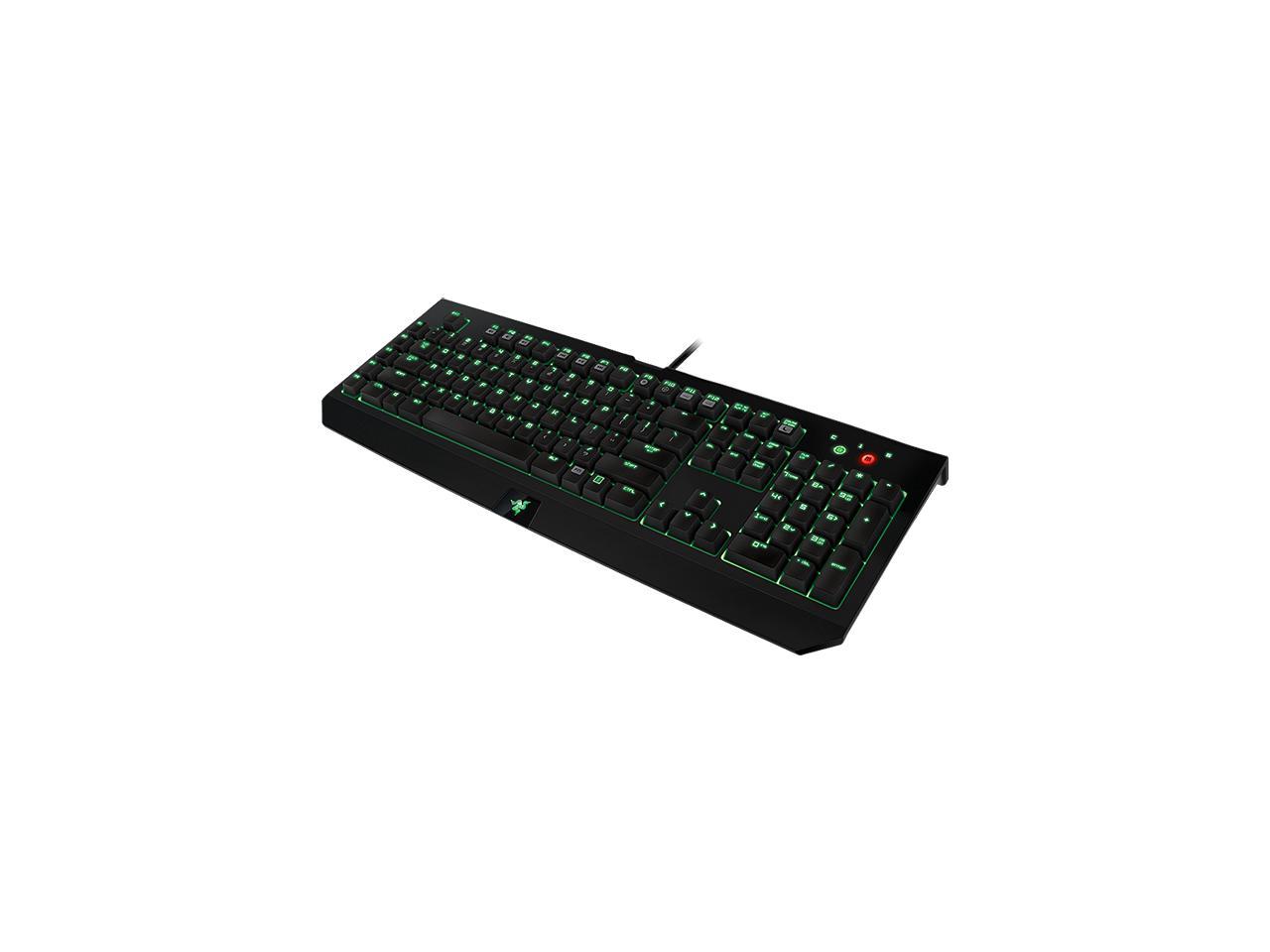 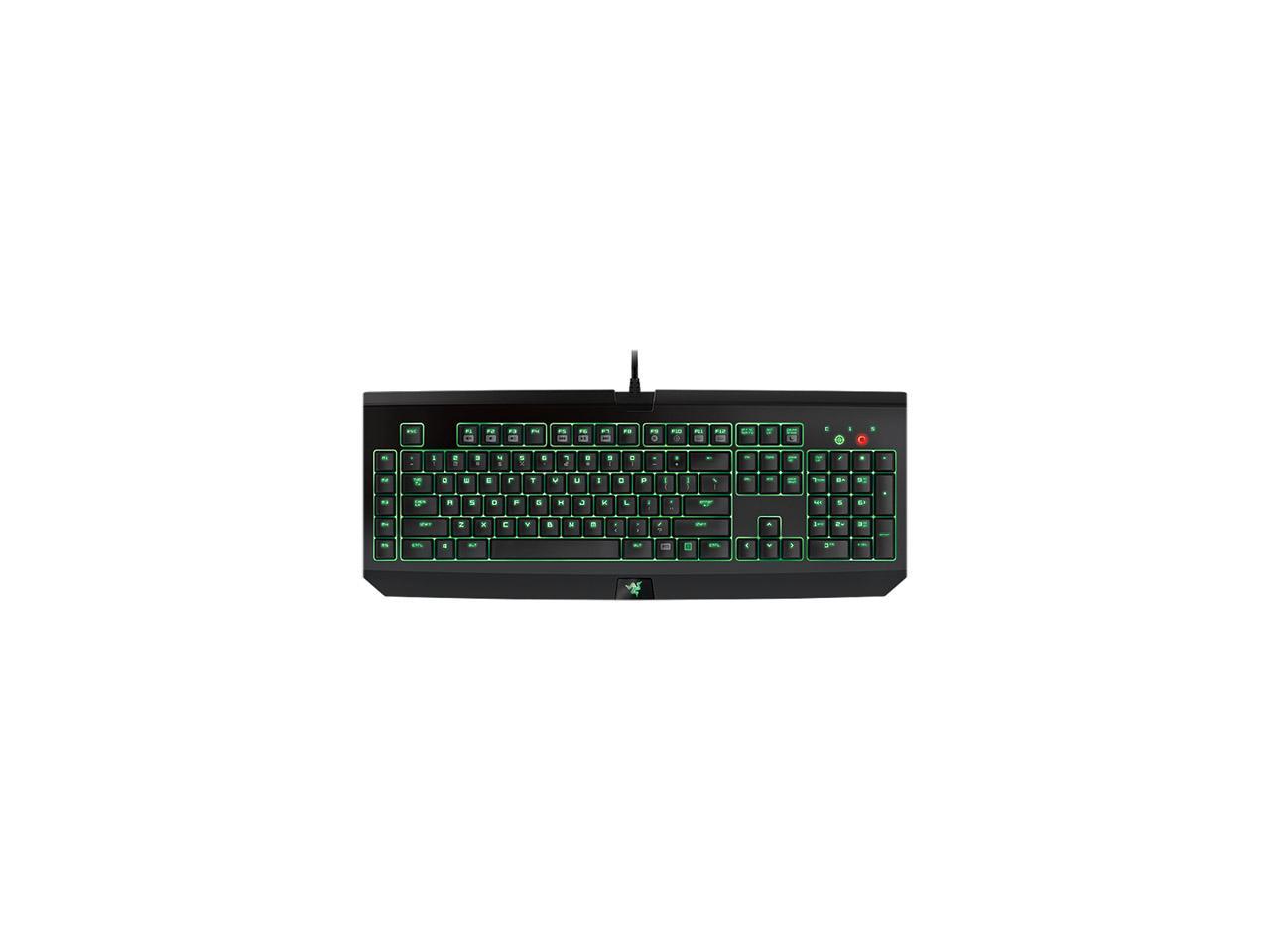 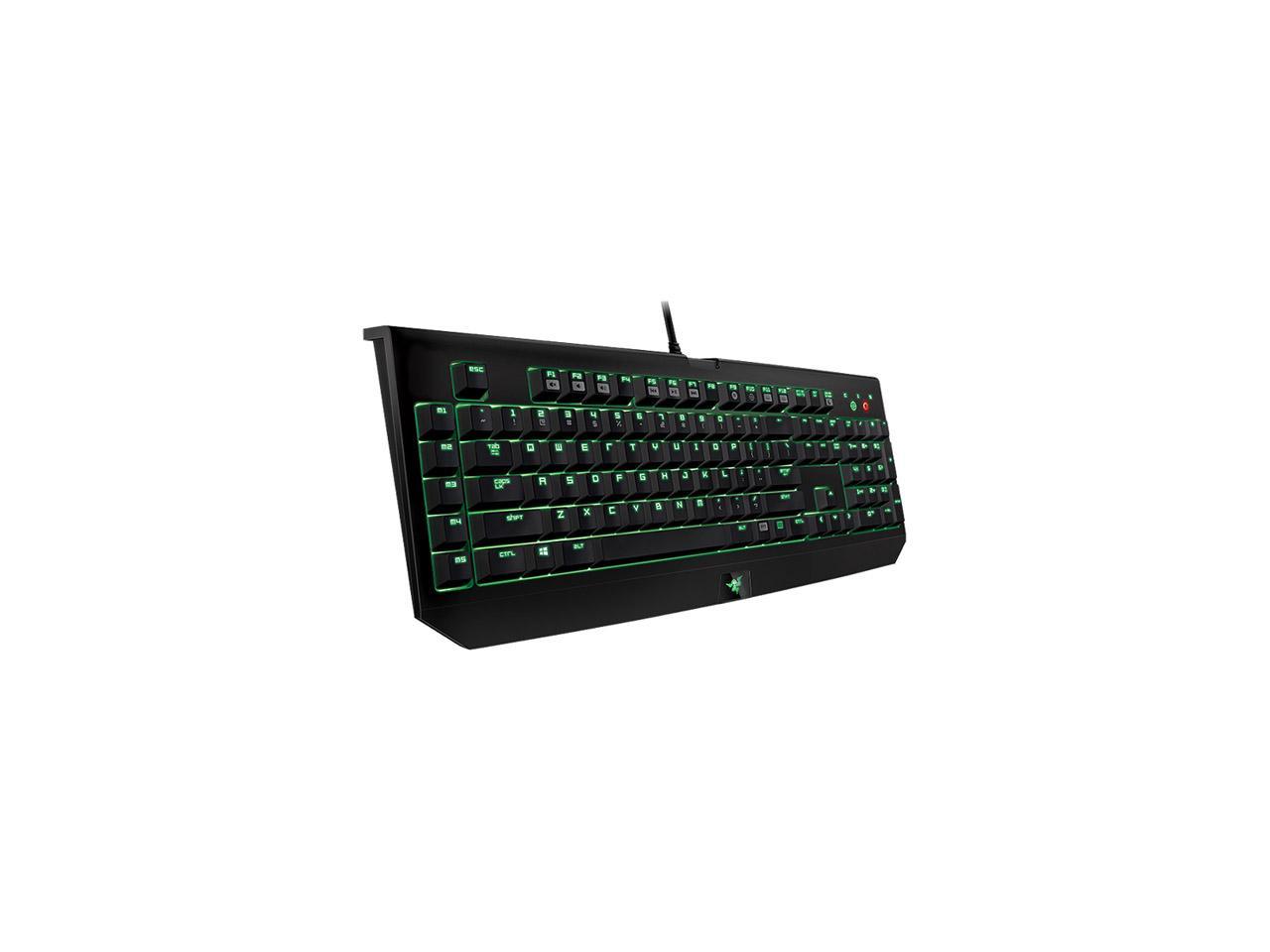 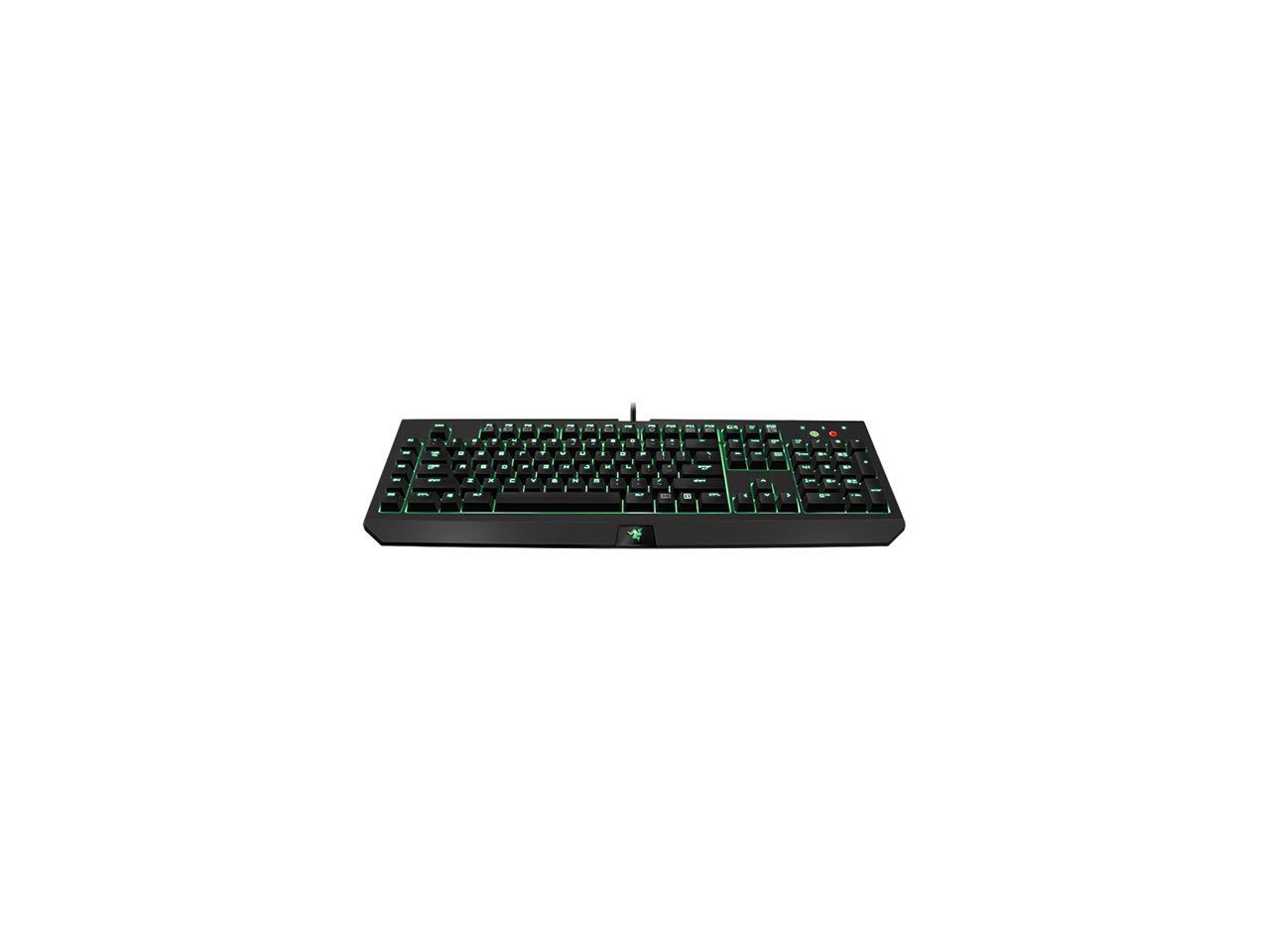 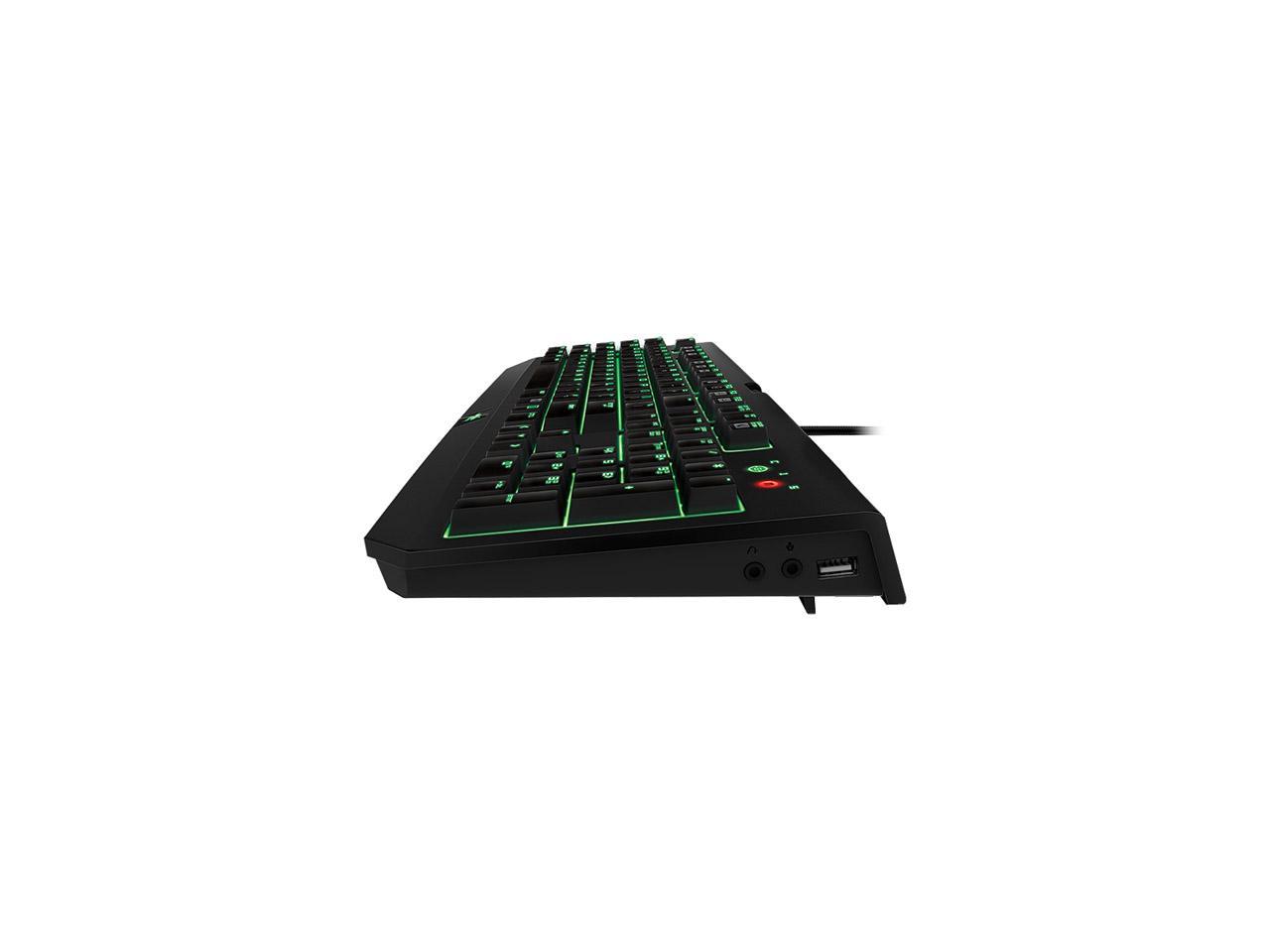 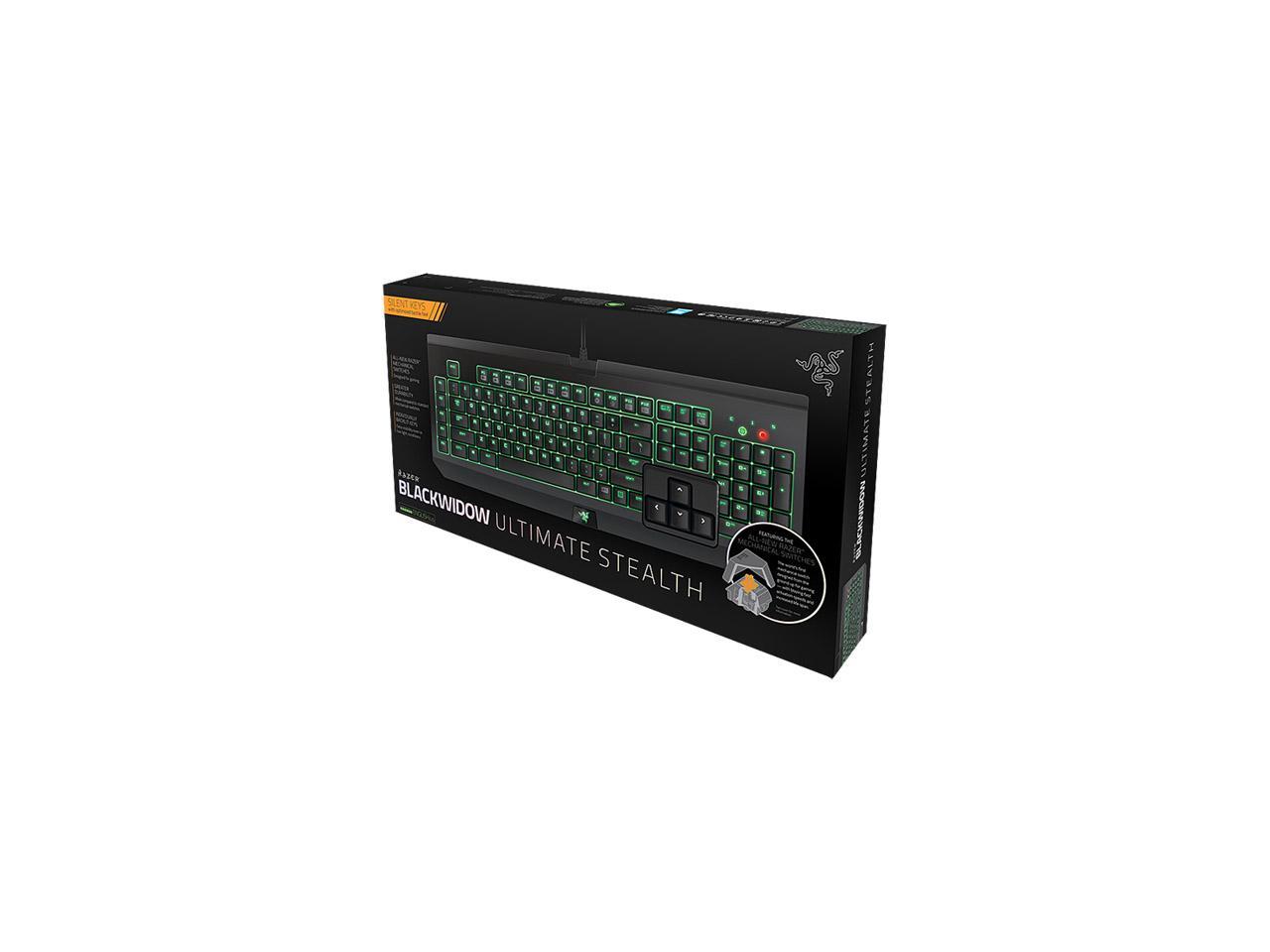 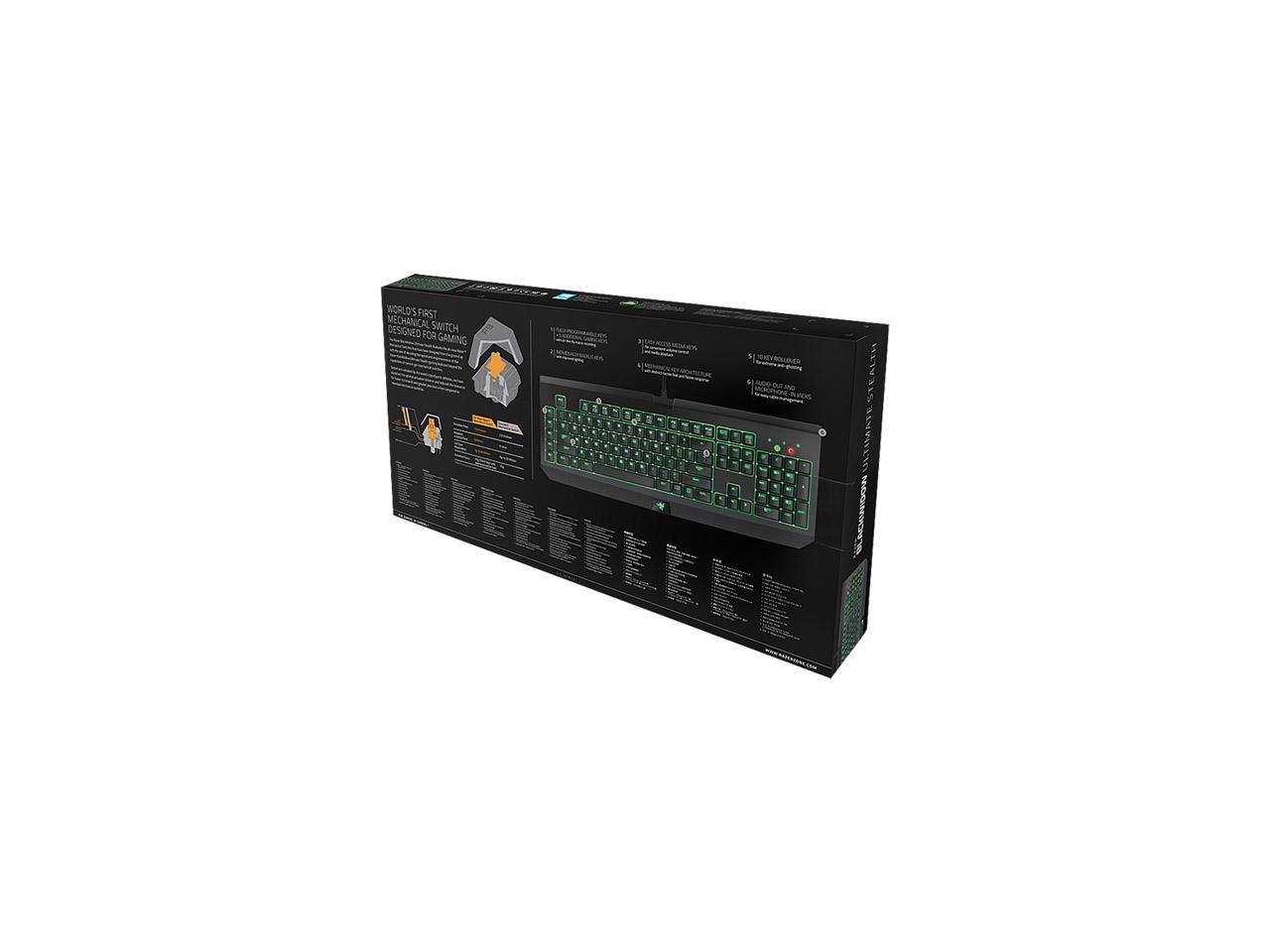 (74) Write a Review
OUT OF STOCK.
Overview
Specs
Reviews Designed specifically for gaming, the all-new Razer Mechanical Switches actuate at an optimal distance, giving you speed and responsiveness like never before. No matter how intense your gaming marathons get, each Razer Mechanical Switch is engineered to withstand up to 60 million keystrokes, so you'll enjoy the Razer advantage for longer.

Whether you're gaming under low-light, or no light, individually backlit keys ensure you never misclick – after all, it could very well be the difference between victory and death. Pros: -Nice feel, you really know when you hit the keys. -Really good lighting -Loud enough that you know that you hit the keys but not as loud as the non stealth model that has the clickers installed.

Cons: -The FN and special keys (volume up and down, gaming mode and light brightness) are painted on instead of black lit. It can be hard in the dark to adjust those because you won't be able to see them.,

Overall Review: -I just replaced my Razor death stalker expert with this one. The lighting is way brighter and it is all around easier to type with. With the death stalker I would feel like I had to hit the key just right or it wouldn't register not the case with this one. Also I'm not a big fan of noisy keyboards and this one has some but I would have to say it just right. I would happily recommend this keyboard to someone else.

Cons: Loud but tolerable. Keys eventually produce duplicate key presses, and in some cases quit working. Does get a little dirty, then again which keyboard doesn't?

Overall Review: Great product but eventually keys wear out. I game every day and each keyboard lasts me about 1.5 years. I have purchased 2 of these keyboards.

Pros: This thing is heavy. Like it isn't moving without you trying to move it. The keys have a sound to them, and you only have to push them about halfway down to make them fire. Key reliability and durability is very high. Brightness settings can be changed with an "FN" key on the keyboard.

Cons: The audio cables/ports are pretty useless unless you are only using headphones. There's enough circuitry on the extra USB pass-through port that it requires a driver. This will sometimes mean that certain other drivers won't work through it (I'm looking at you, Samsung Android devices). Razer Synapse - It's a collection of marginally useful tools that do nothing but push your settings "to the cloud". Macros do not work and cannot be recorded without it though. The keyboard has built in memory/processing and could store them, but for some reason, it doesn't. Only the "primary function" of each key is backlit. For example, the "1" key above Q. "1" is lit, "!" is not. So in the dark you can't look at the keys and see what they are. Oddly, the exception to this is the numpad, which has the primary and secondary functions side-by-side and lit.

Overall Review: If I had to do it over, I would not recommend Razer products. It's a good keyboard, but not worth the prices. If you are going to buy this, please don't buy it for the macros. You will likely be disappointed. This product doesn't necessarily make sense hardware-wise, and the software is baffling. Also, updates to the software can and do install "extra" things that you have to seek out and remove.

Overall Review: Really enjoying typing on this keyboard so far (it's been a few days). The key feel is more "Apple2" as opposed to "IBM." (Clacky vs Clicky). Keys don't stick and they have a distinctly satisfying feel and pressure.

Pros: This is my first mechanical keyboard. My co-workers at work all have mech. keyboards, so I was recommended to buy one. Though I didn't buy it on newegg (bought it in Best Buy), I was testing between 3 different keyboards (The K70, the Logitech G910 and this one). I ultimately chose this one because of it's color Been using this for about over a year and I absolutely love it. Use it for gaming and work. Very responsive and if you like keyboards because of the clicky sound, this is the one to go. For $100, you get a full keyboard ( with number pads), microphone port and a usb port. Would definitely buy another one.

Cons: Cannot think of one

Pros: - Very responsive, even to light touches. - Has a very satisfying "click" as you press each key. (Wife says it is therapeutic to listen to) - Programmable macros and gaming mode - Side pass-through USB & Audio jacks - Software automatically syncs settings to/from cloud. SUPER HANDY because I use this keyboard on two separate computers with a KVM switch.

Cons: - Acts weird if you don't install the drivers (Repeats keys/freezes every 10-15 minutes)

Pros: -Very good looking keyboard, nothing crazy like gargoyles or angel wings sticking out from the side. Simple, no frills, very Razer in design. -The backlighting is very nice with a large range of brightness from "off" to "retina-searing radioactive fallout". -Heavy. There's no way you're going to accidentally bump it and send it flying across your desk. -On-the-fly macro recording -Very robust cable. It's about a 1/4" thick with a fabric braiding around the outside, not anything you'll wind up damaging over time if you're careless every now and then like I am. -Relatively quiet. The key switches are similar to Browns (but Razer's "variation"), and are much quieter than the version of this keyboard with the Blue switches. I actually got the keyboard with the Blues first, but the noise from the keys was so annoying that I swapped it for this one.

Cons: -Lacks a wrist rest. This keyboard is one of the tallest I've ever used, but lacks a wrist rest. This can result in cramps if you start to use it for an extended period of time. -Synapse. Luckily, this keyboard works without the Synapse driver system installed. When I installed it, I found that it constantly ran in the background as well as began at system start up. The option to disable either of these is not in a very intuitive location, but Razer has told me that it is there. I wound up uninstalling it and it runs just fine (macros do not work, however I never used them). -Not very comfortable for extended writing sessions. I write news articles for multiple websites, and this keyboard induces fatigue quickly due to the rather heavy keys and lack of a wrist rest.

Overall Review: I feel I should mention that my time spent using the keyboard is fairly balanced between typing and gaming, and the gaming time is not heavily-competitive games, so the majority of the review centers around typing specifically. I got the keyboard to replace a Logitech G15 and if the G15 wasn't dead I would probably switch back to it. It took me a while to find a switch type that I liked. I find the noise from the blue switches to be very irritating, and luckily this keyboard lacks the "click" from the other switches. Still, these keys aren't exactly comfortable for typing in my opinion, and lack the tactile feedback that the G15's keys provided. After about 30 minutes of straight typing, the keys start to feel muddy, losing the small amount of tactile feedback they began with. It is a very nice keyboard, and I'm sure there are many people who will find this to be their perfect keyboard, but I am not one of them. I have found over time that I do not like the feel of mechanical keyboards, and will likely revert back to either a rubber dome or membrane keyboard when it's time to replace this one.

Pros: While I was looking around for various keyboards, this one and the non-Stealth keyboard's stood out to me. I went with the Stealth, only because the keys would be a little bit quieter, than the standard keyboard. I knew this would've been a nuisance to the Mrs, so I didn't want to throw more fuel onto the fire, on top of paying for all of my new expensive toys. One of the biggest benefits is the illuminated keys. I don't need to have the lights on at night, in order to play on the computer or play video games. This makes those late night sessions, that much more enjoyable. While many others has it, and this isn't just something Razaer brings to the table, with this keyboard, it's a huge factor (Which I'll explain in the con section). I think probably the main reason I went with the Razer keyboard is because I know they make & design high quality keyboards. Now having this keyboard for almost a month, my opinion of them hasn't changed one bit. In fact, I can now see why folks say that once you get Razer stuff, there is no going back to anything else. How the keys, how the keyboard is built, you can't get much better than this.

Cons: My only true con is the spacing of the keys. I know this has to be the case because of the illumination. However, coming from many years of non-illuminated keys, with tighter key placement, I'm having to re-train my brain, into memorizing where these keys are placed. If I had to put an example to it, I would say it best feels like you're typing on a typewriter. The key placement are about the same, and the typewriter is even mechanical, so it seems to be the best way to explain it. Granted, this isn't a show stopper for me, as I will continue to buy Razer products, from this point forward, it's definitely something to be mindful of, when purchasing this keyboard.

Overall Review: While I won't completely state what Newegg did (Thanks again to Daisy T.), but I will say that I've been shopping with Newegg since 2007. I've always valued their inventory as some of the highest in the industry. The first time I went to them with a concern, they easily resolved my concern, without any questions. That, to me, shows they value their customers, and will go to great lengths to prove it. As such, they've garnered a customer for life, and will be sure to always look at Newegg first. In regards to the keyboard, if you have the extra cash laying around, I'd say do yourself a favor, spend the extra money, upgrade to this keyboard, and be ready to play video games like never before. My only warning to you, once you buy the full Razer setup (I currently have this keyboard, with a Naga 2014 MMO mouse, and a Goliathus mouse mat), you'll never want to go back to a standard setup every again.