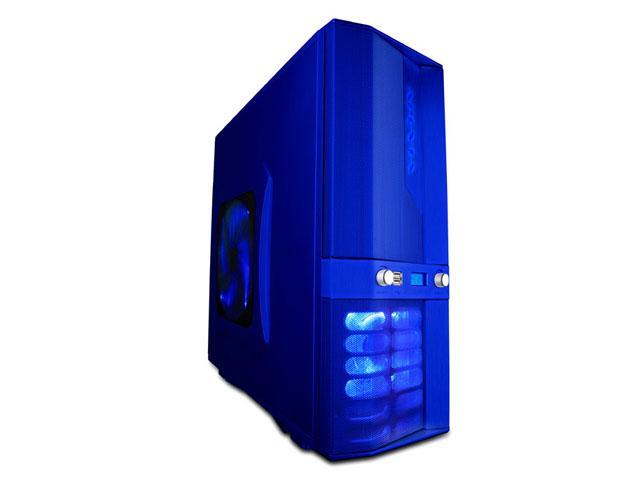 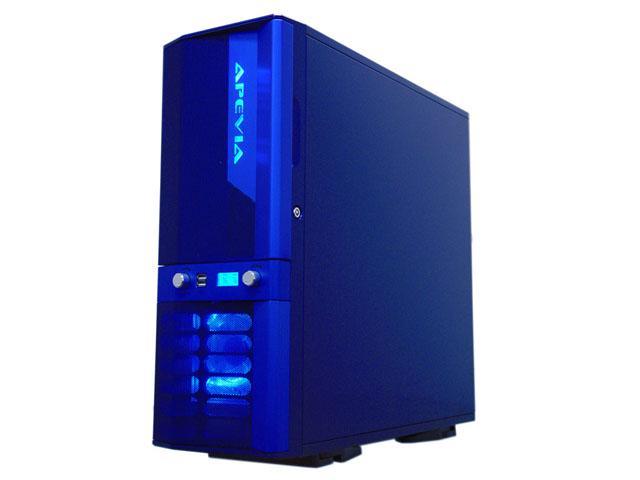 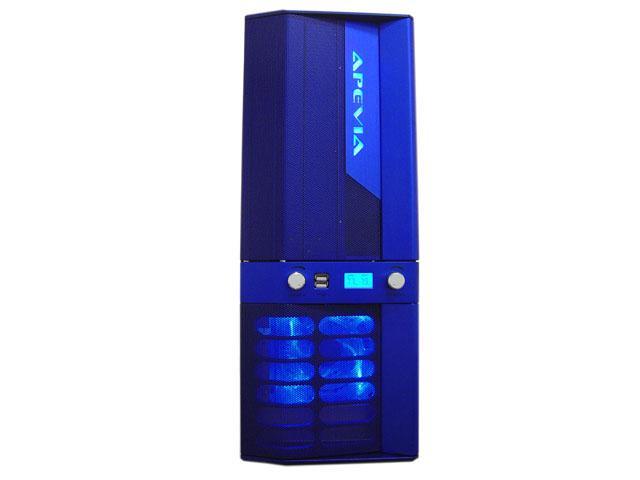 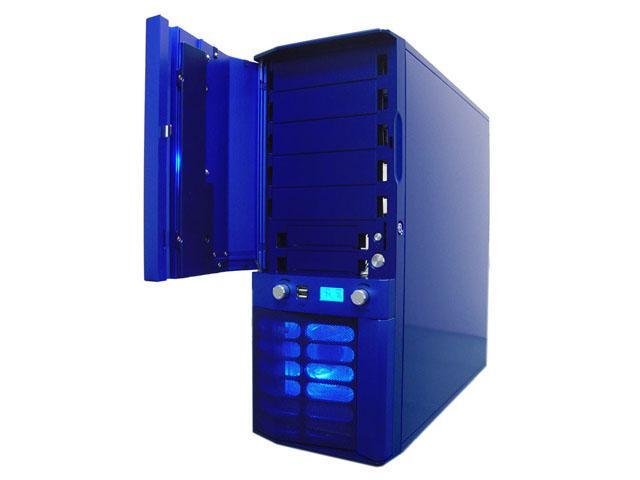 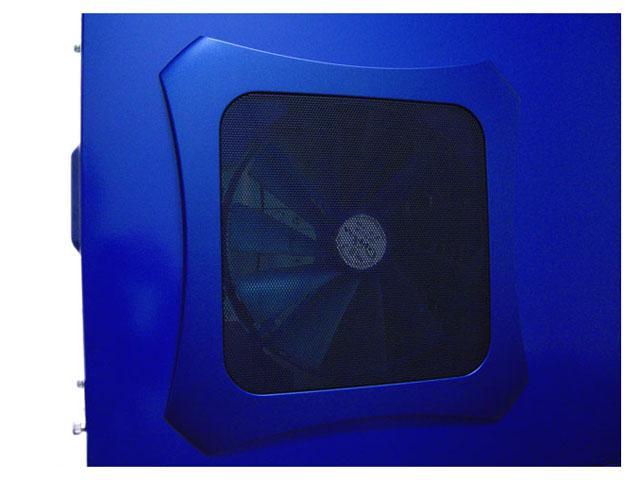 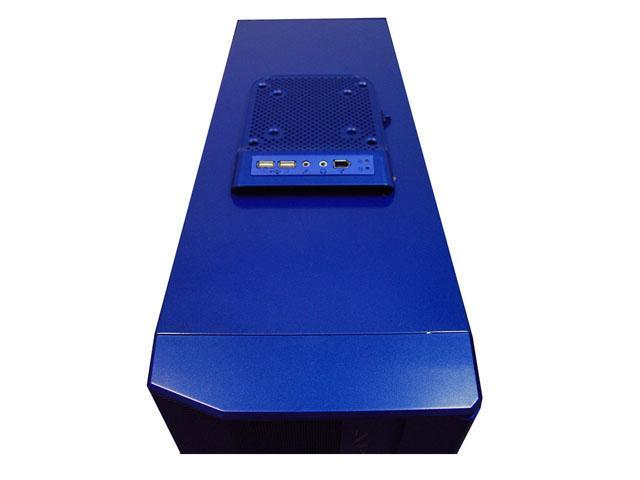 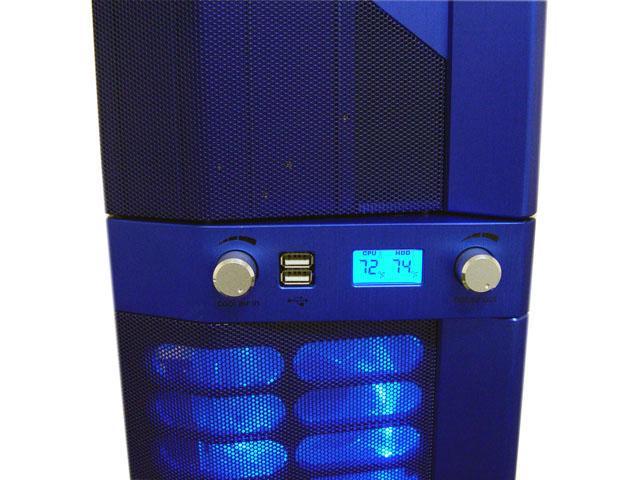 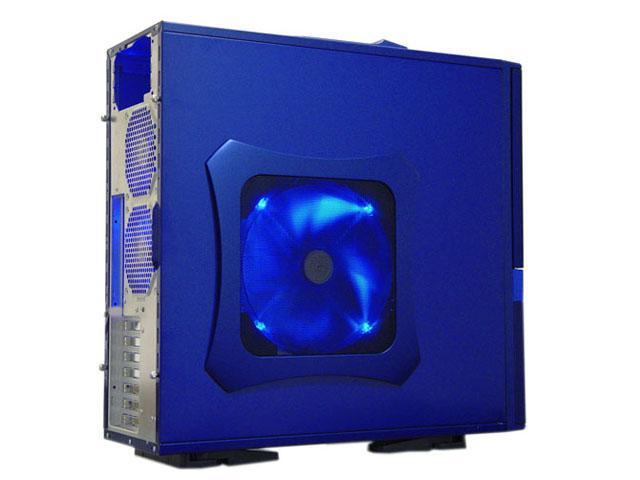 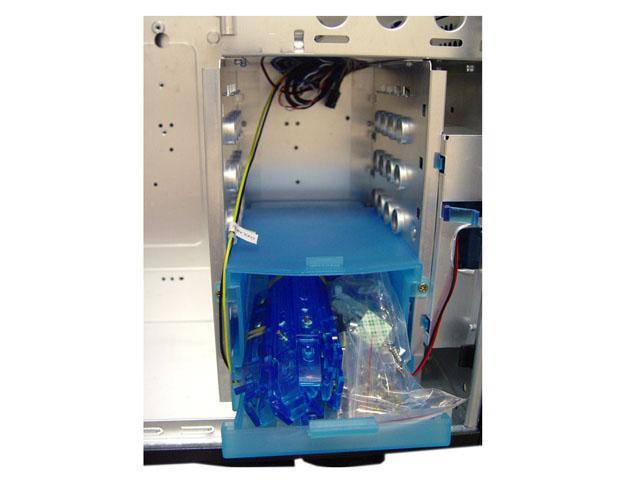 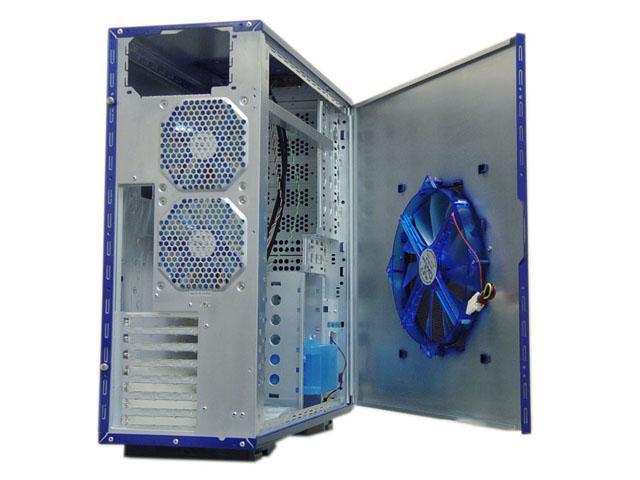 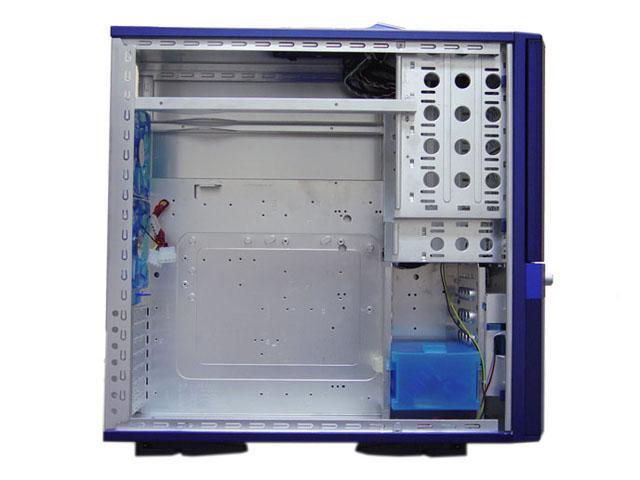 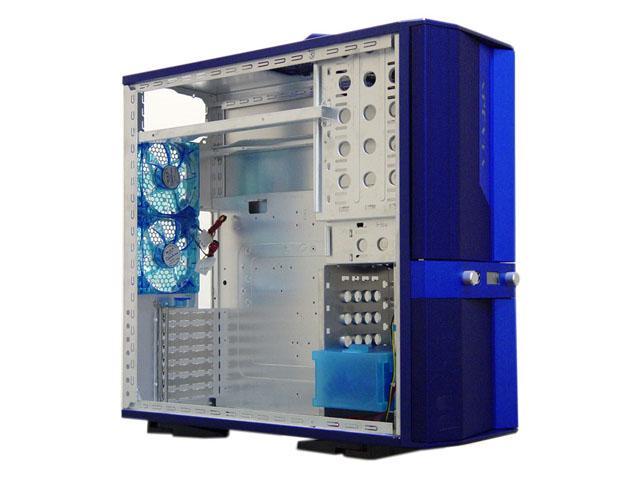 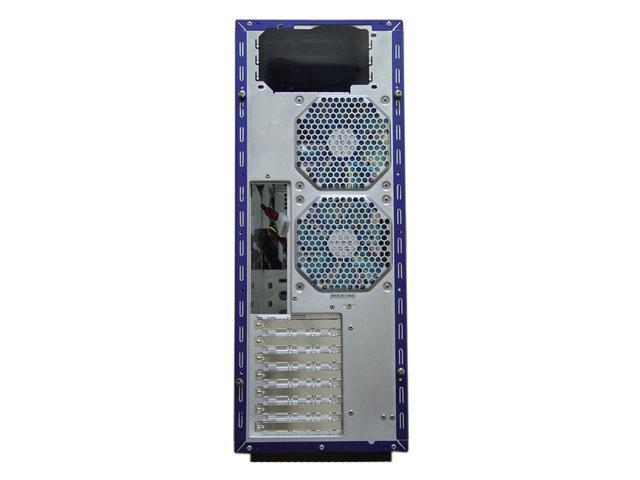 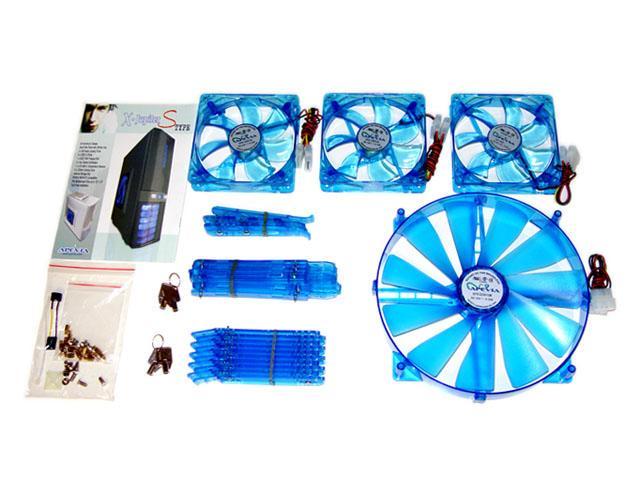 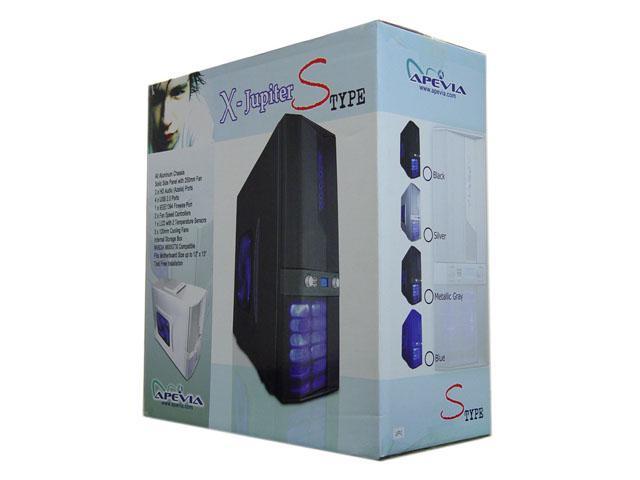 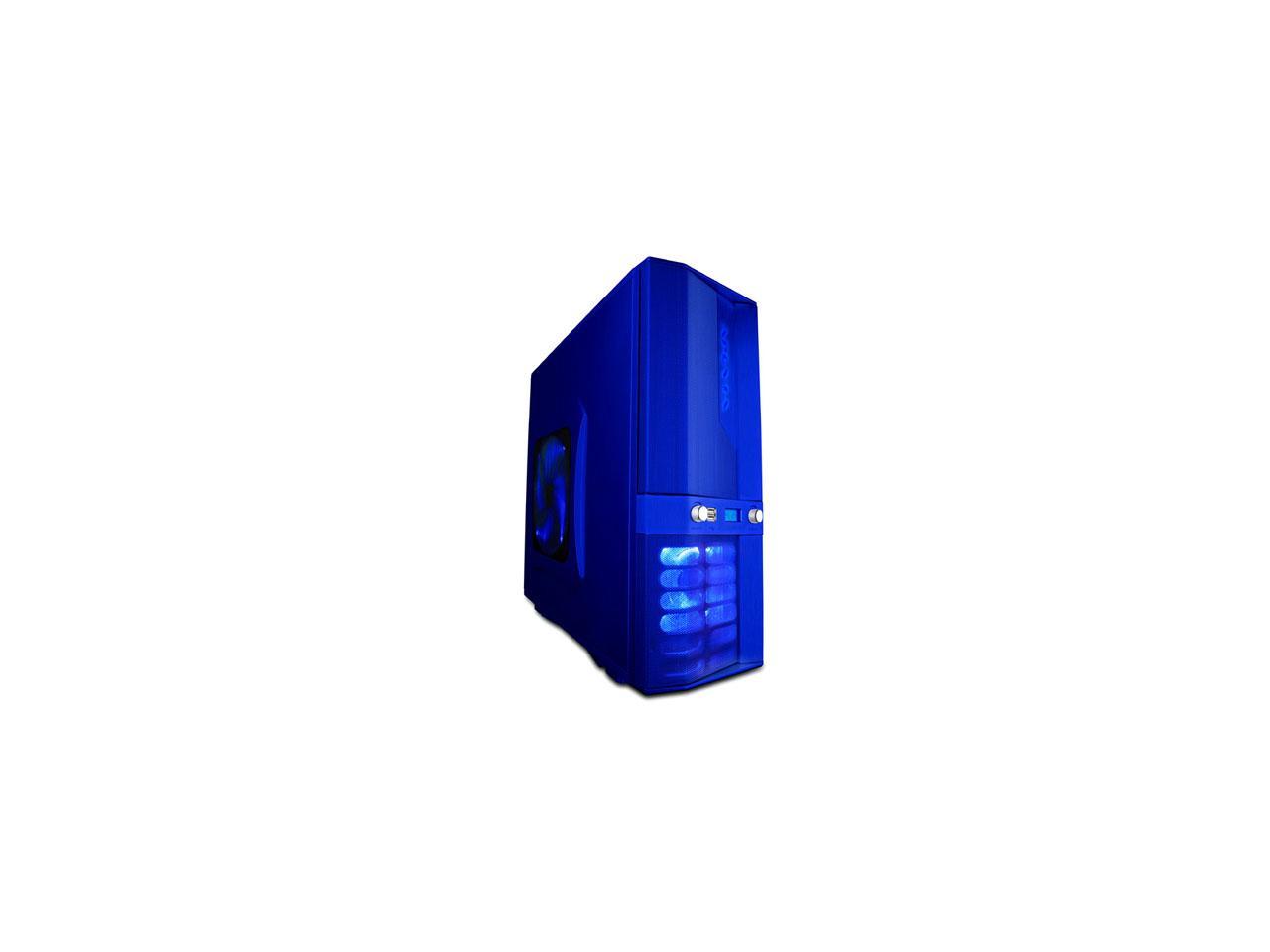 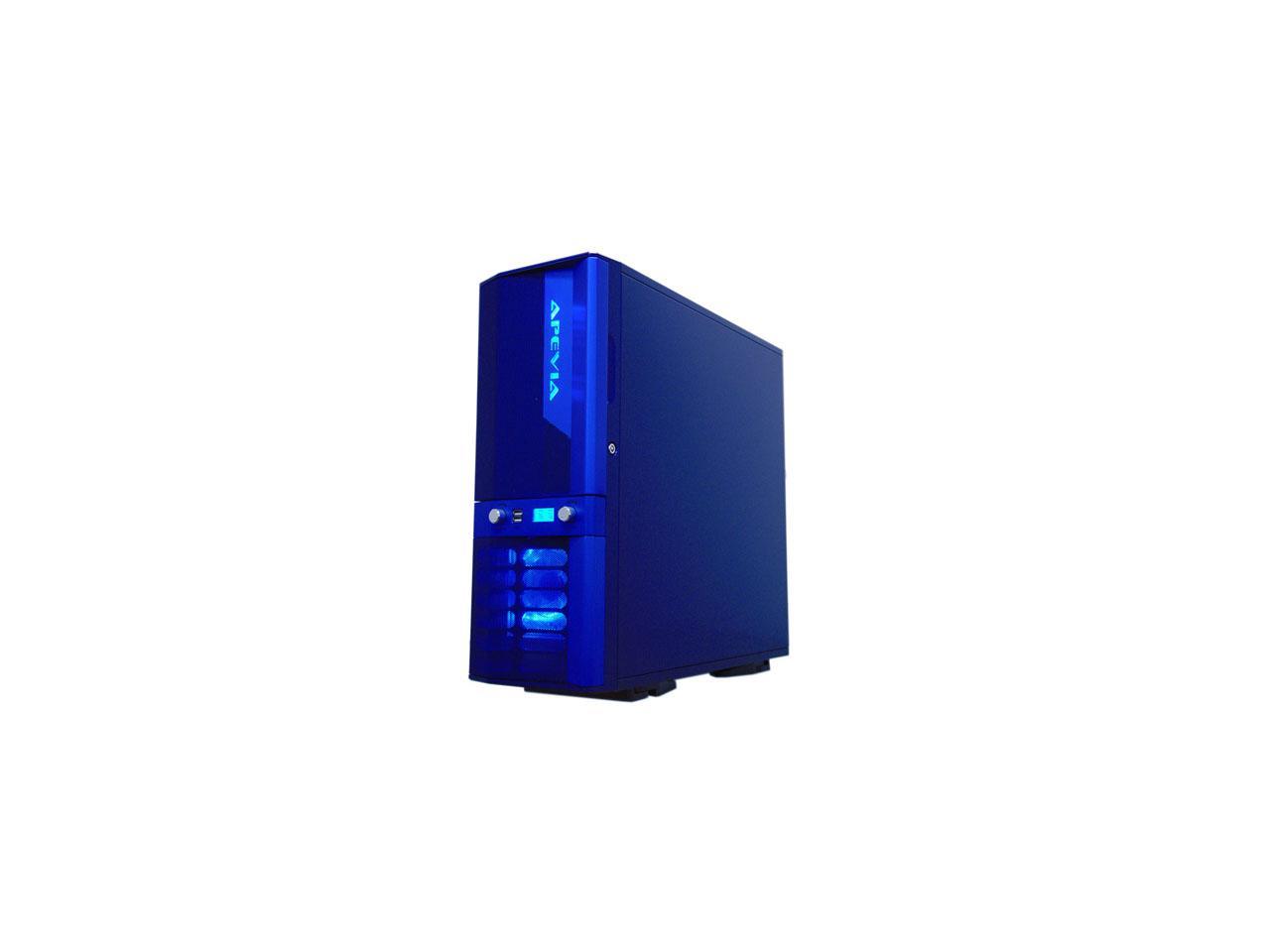 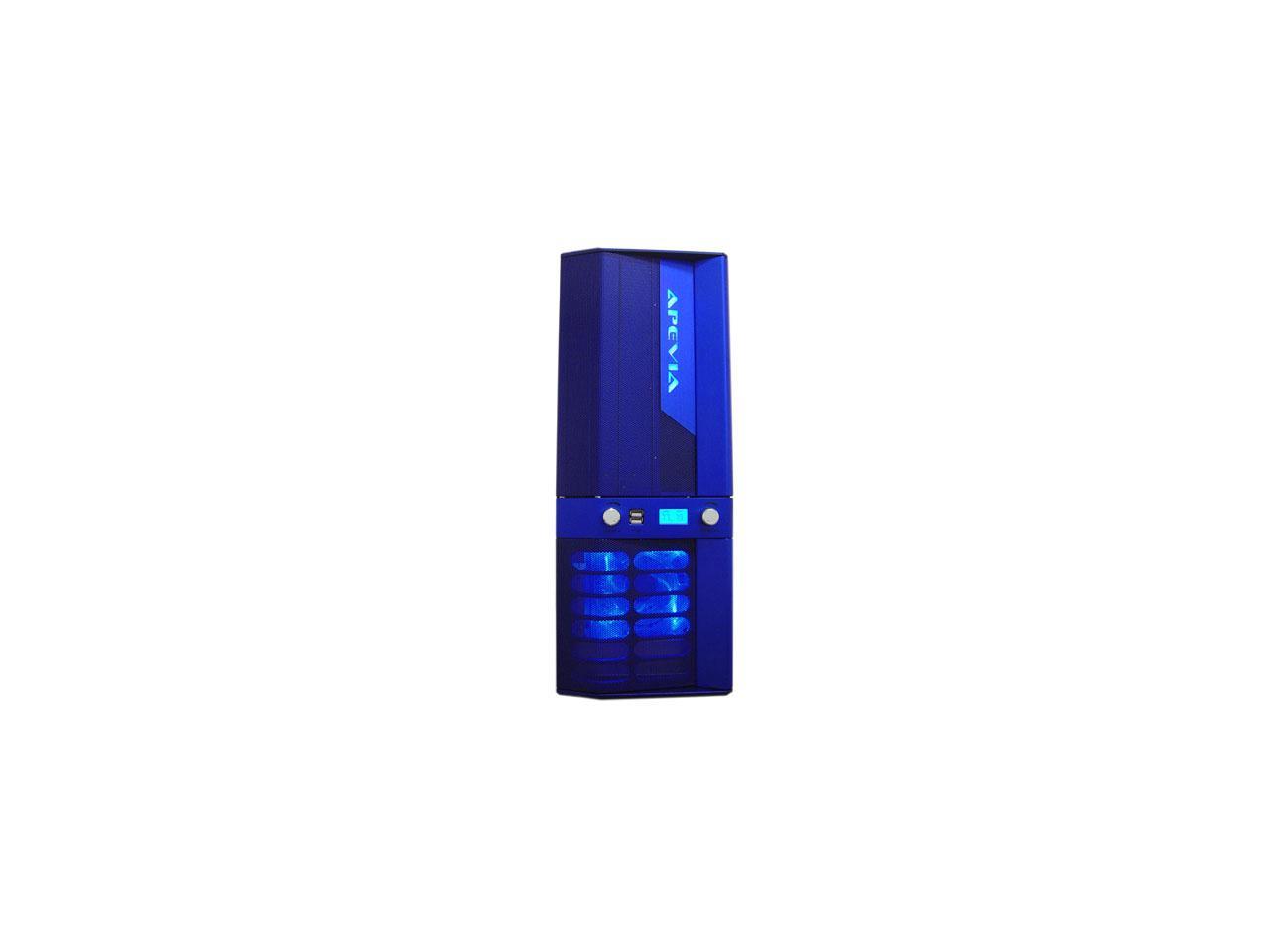 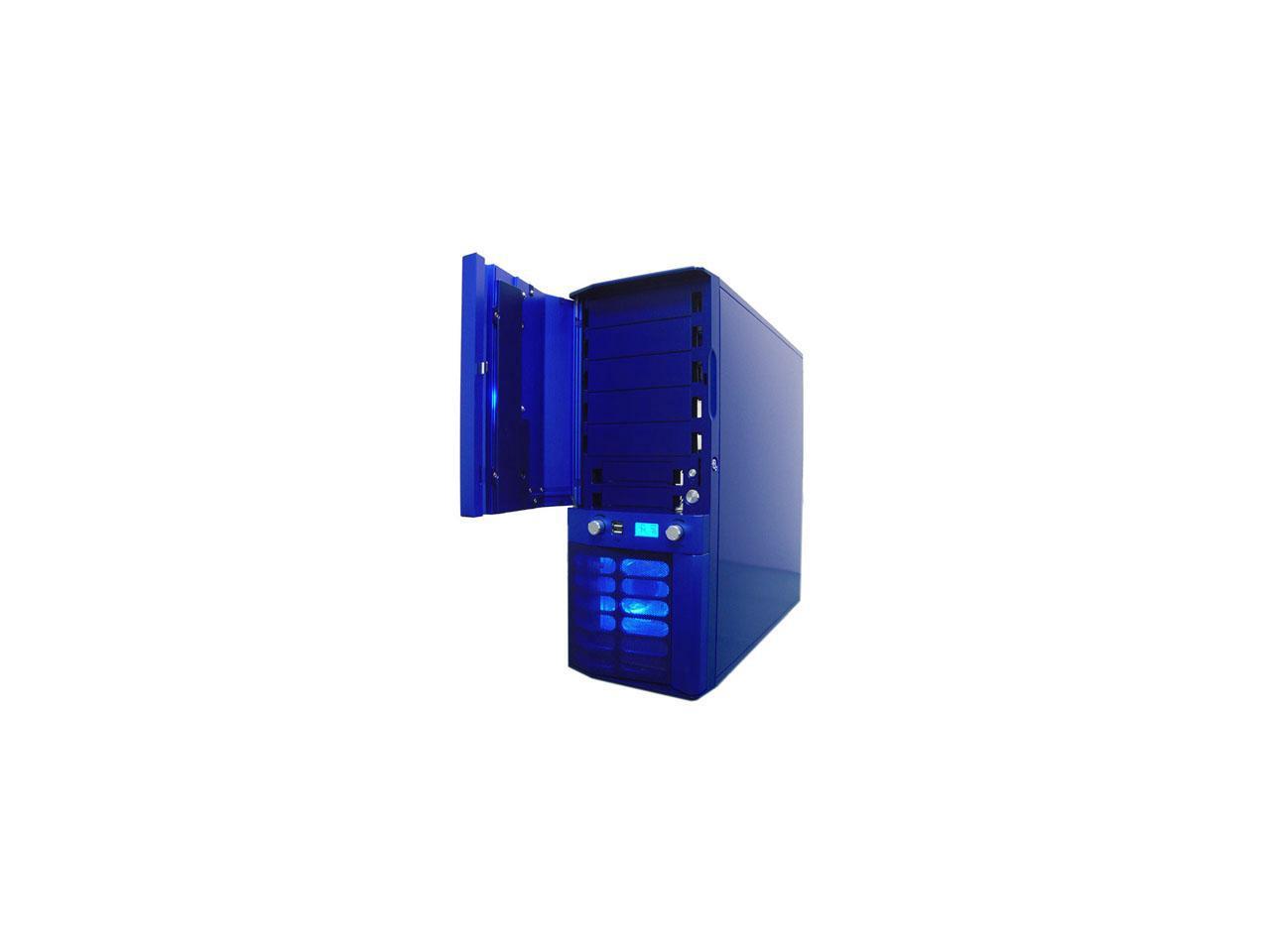 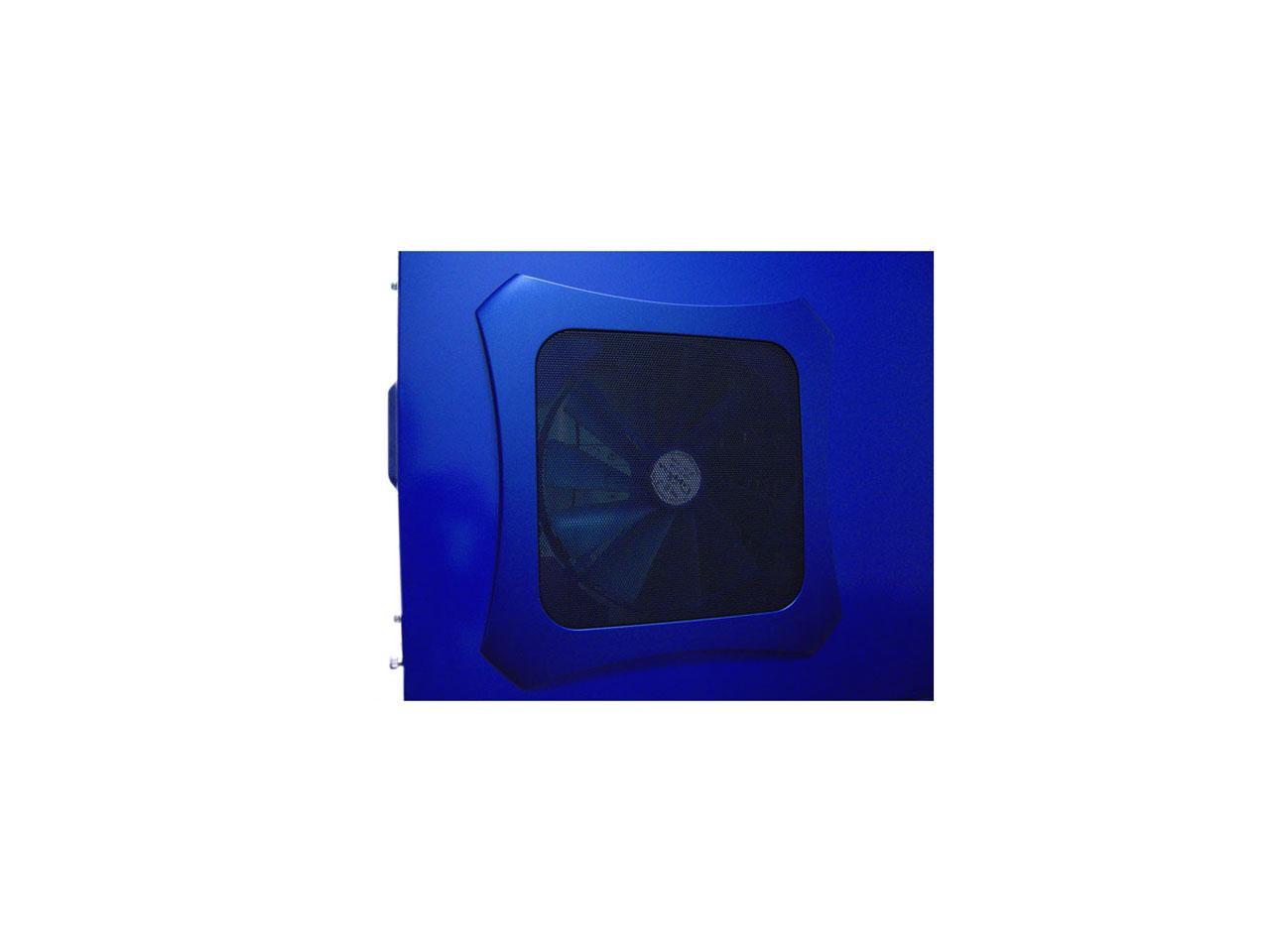 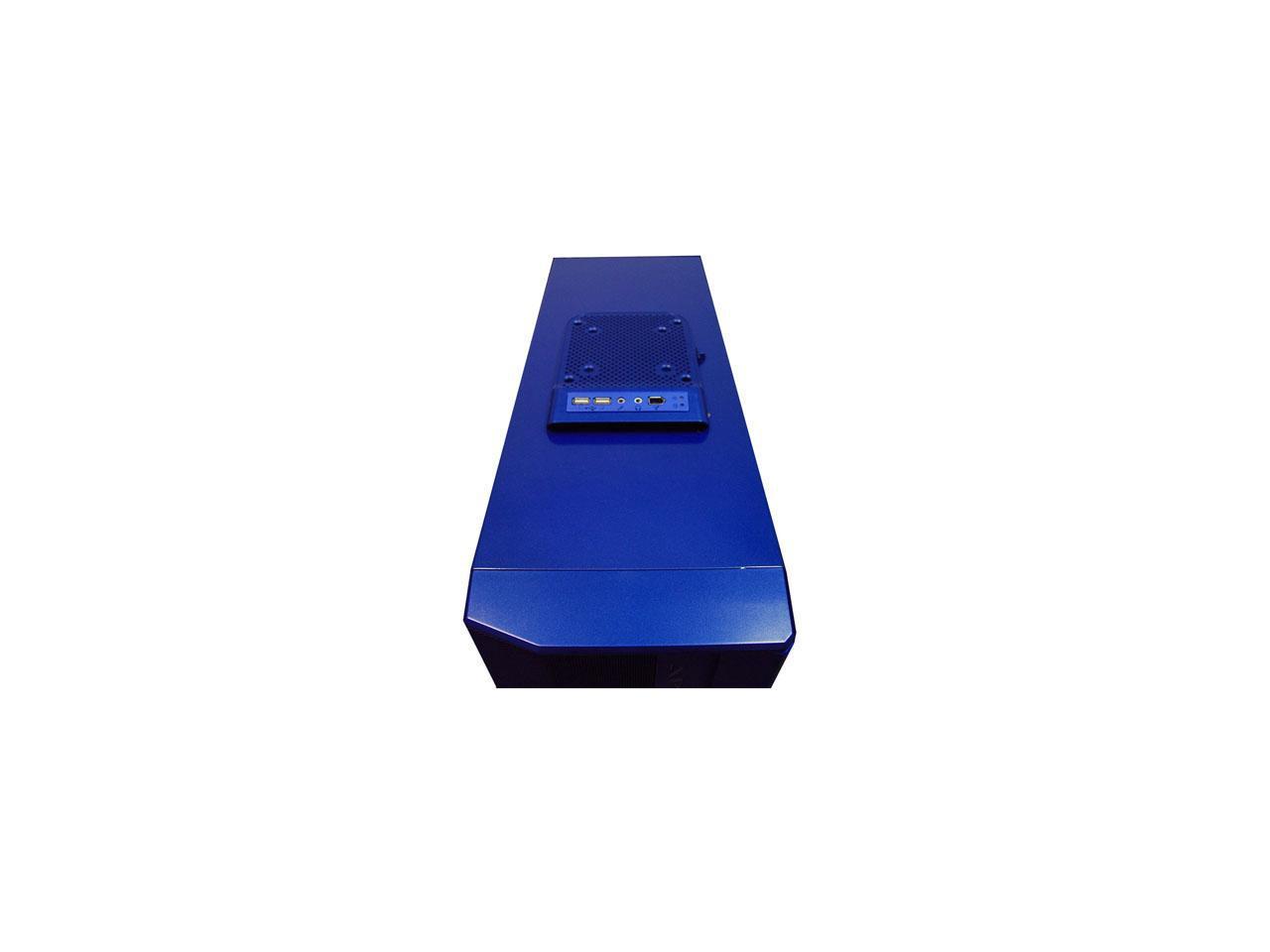 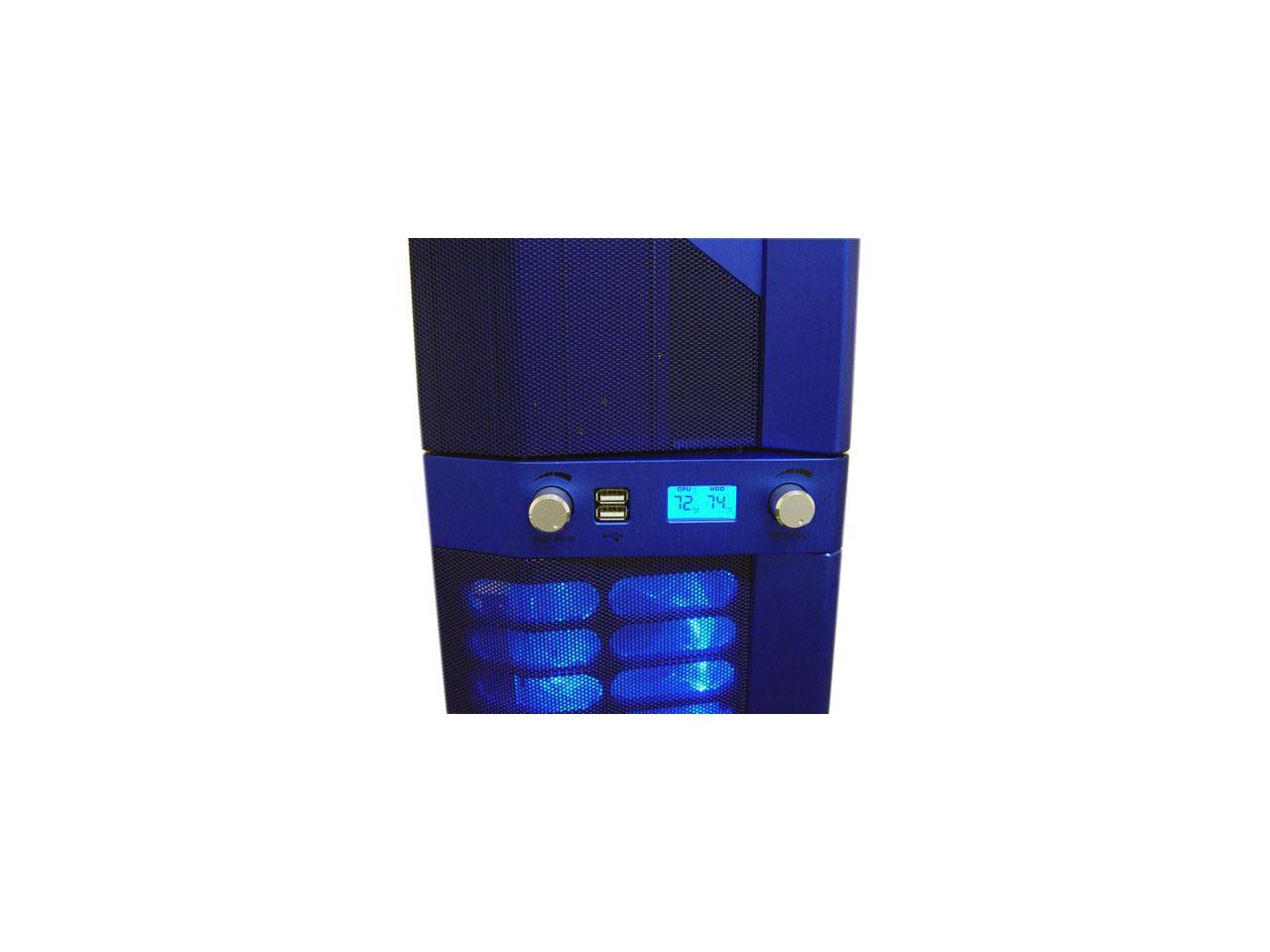 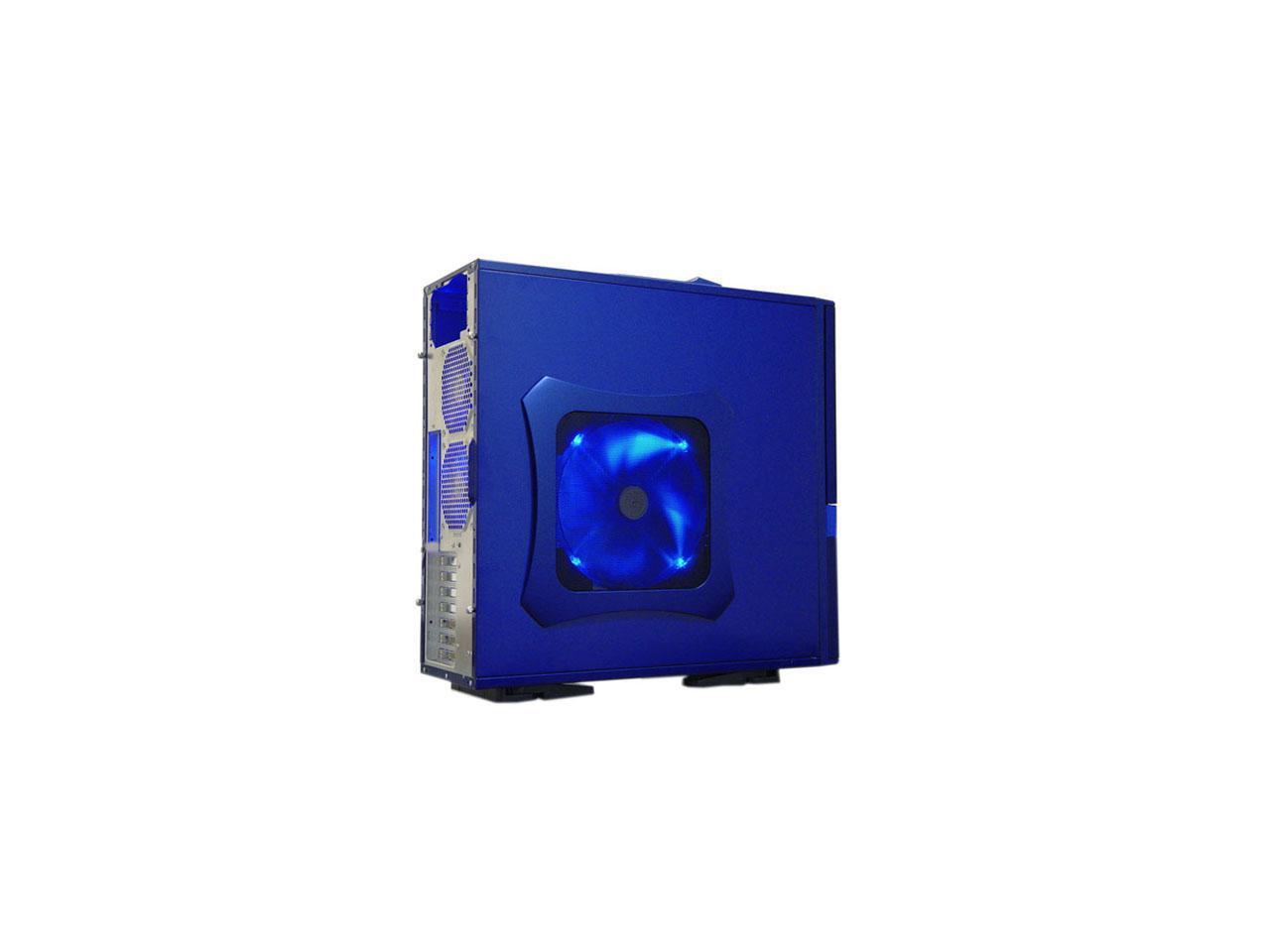 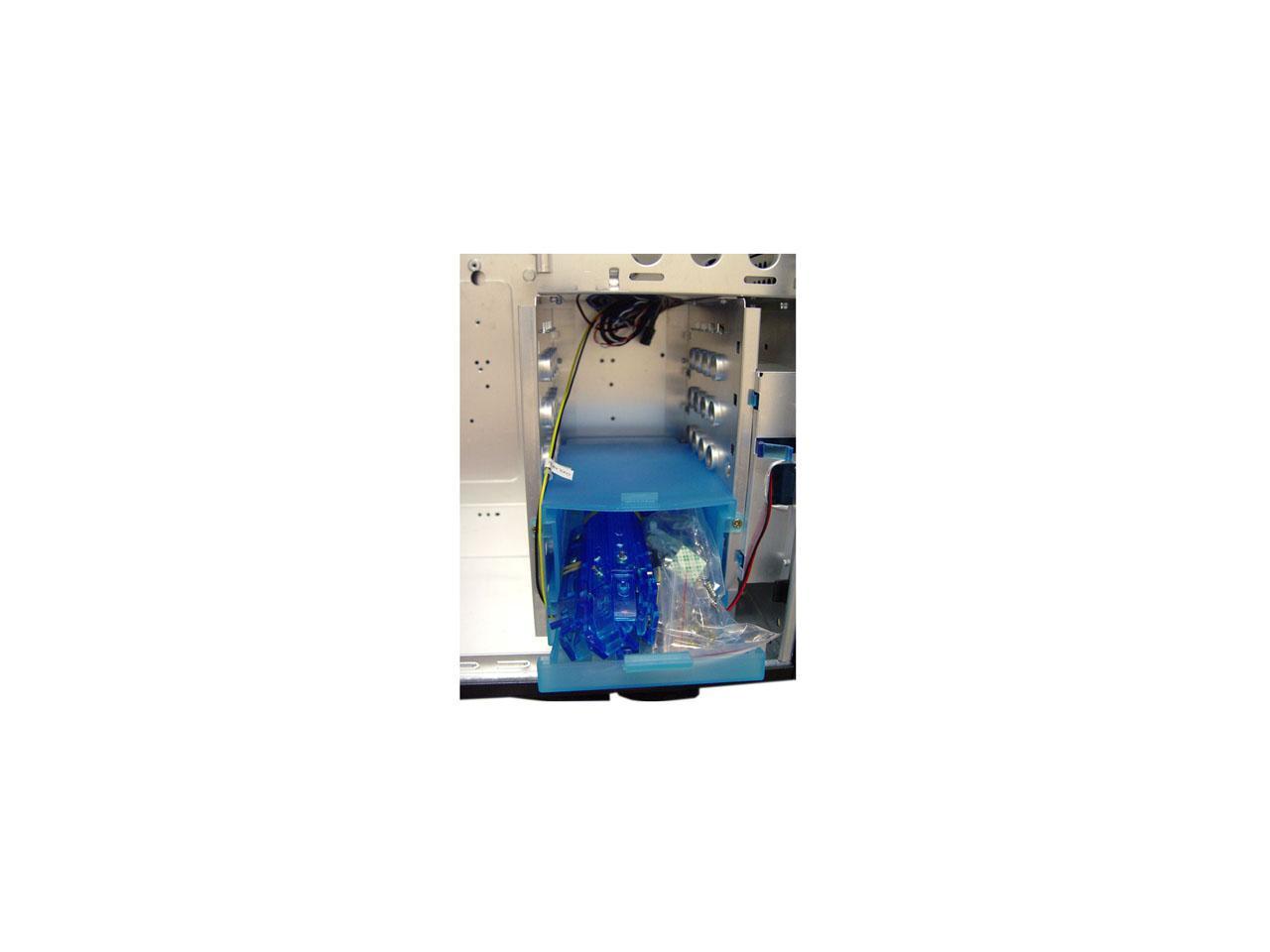 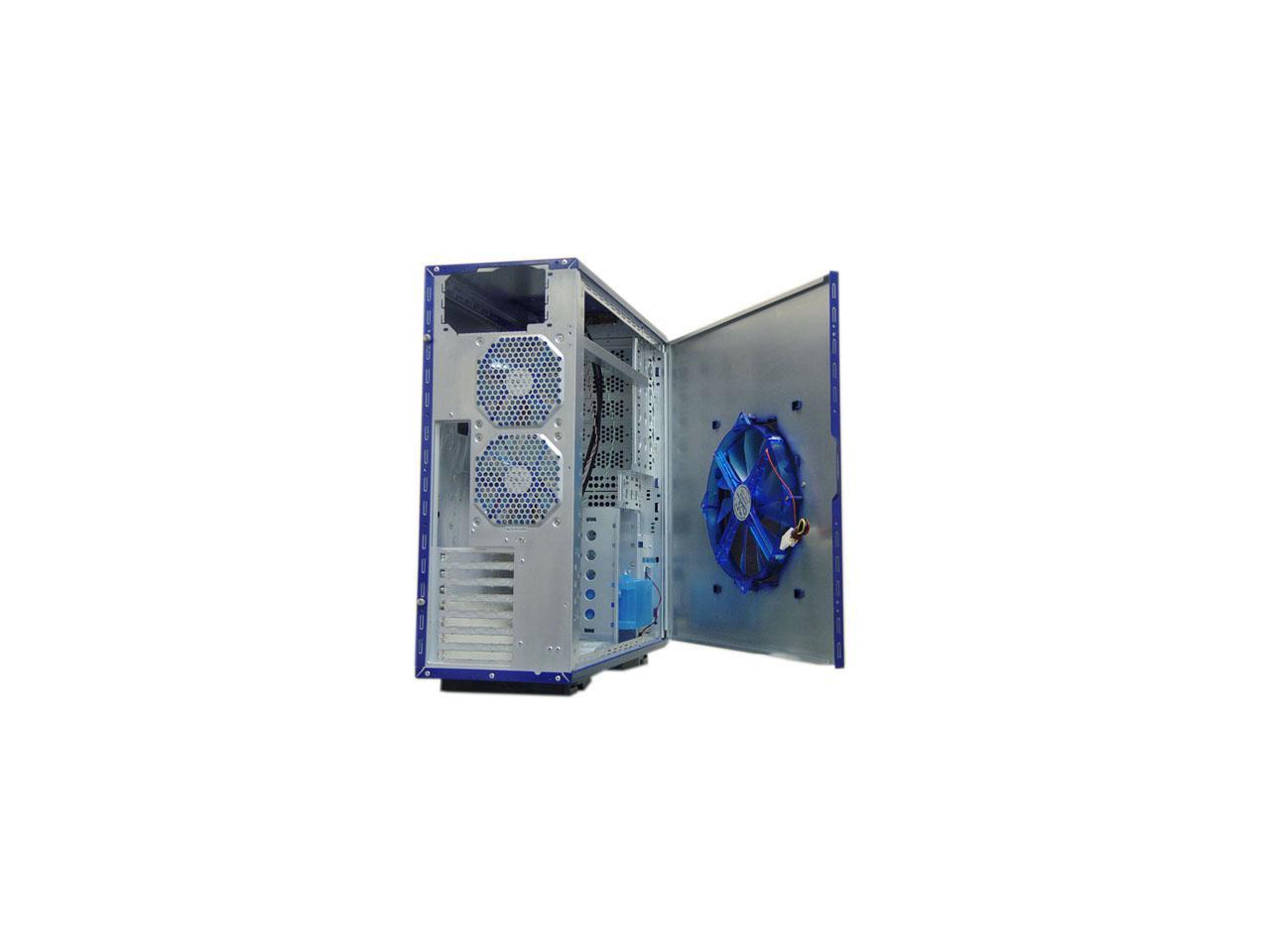 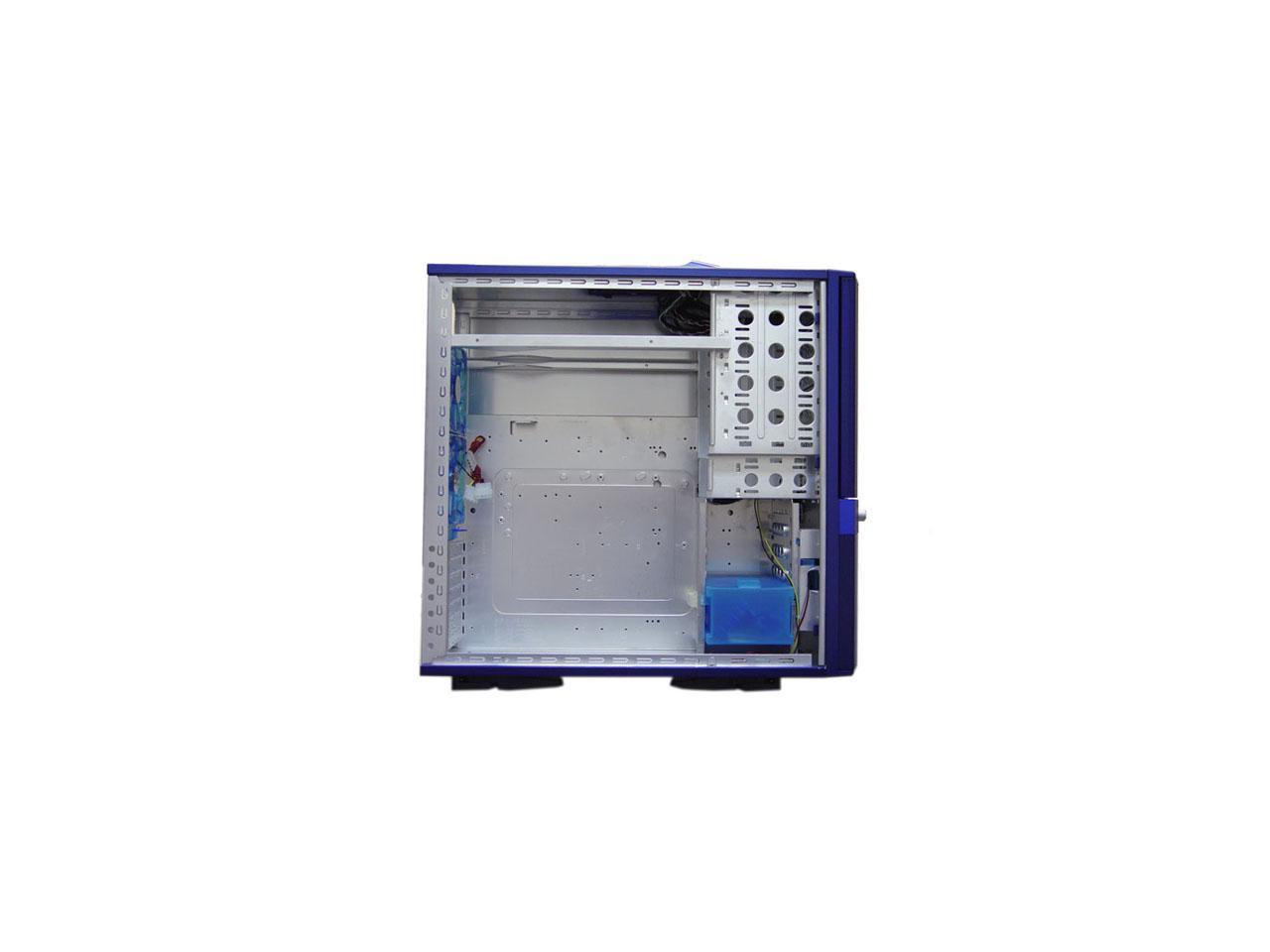 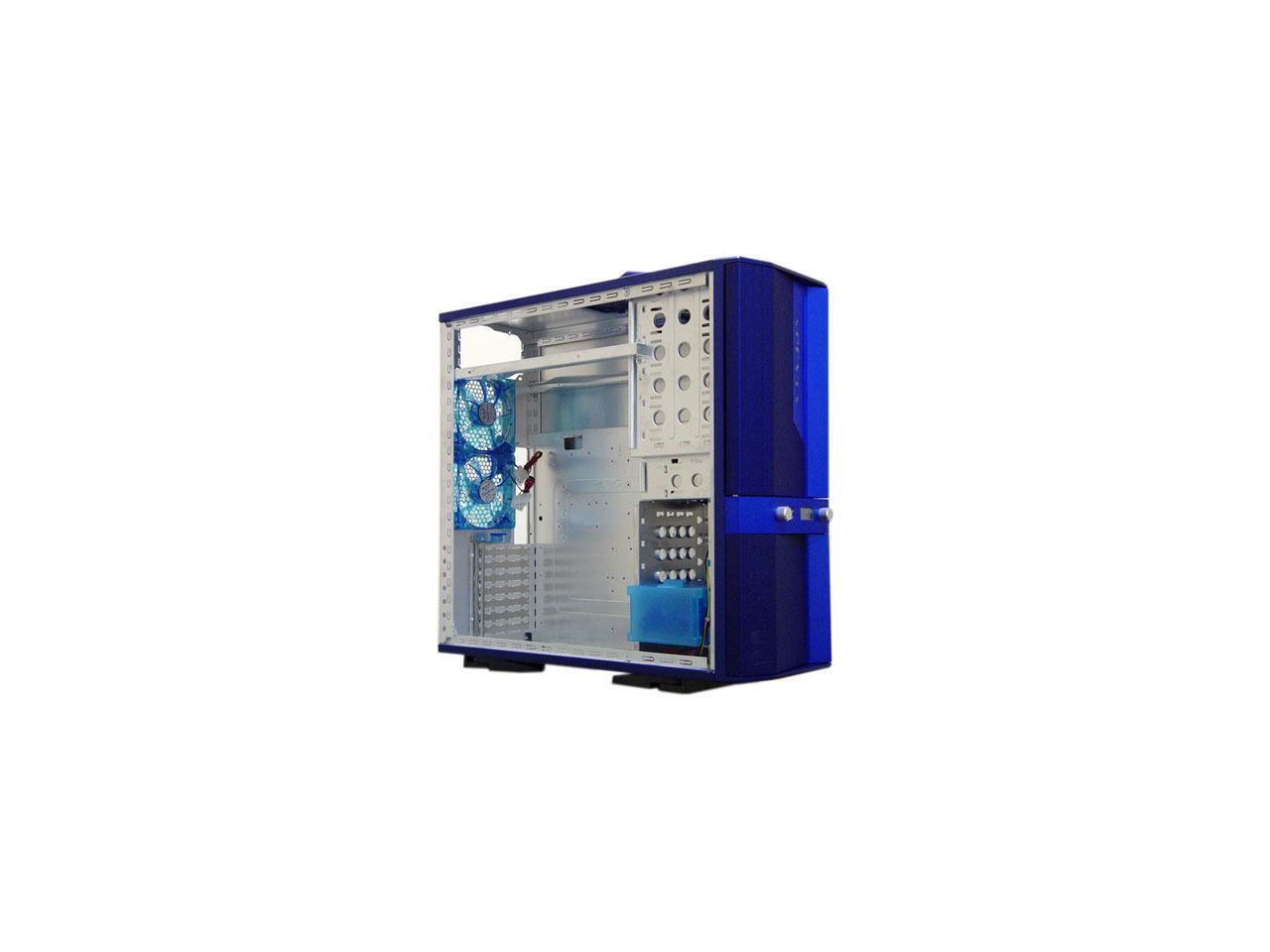 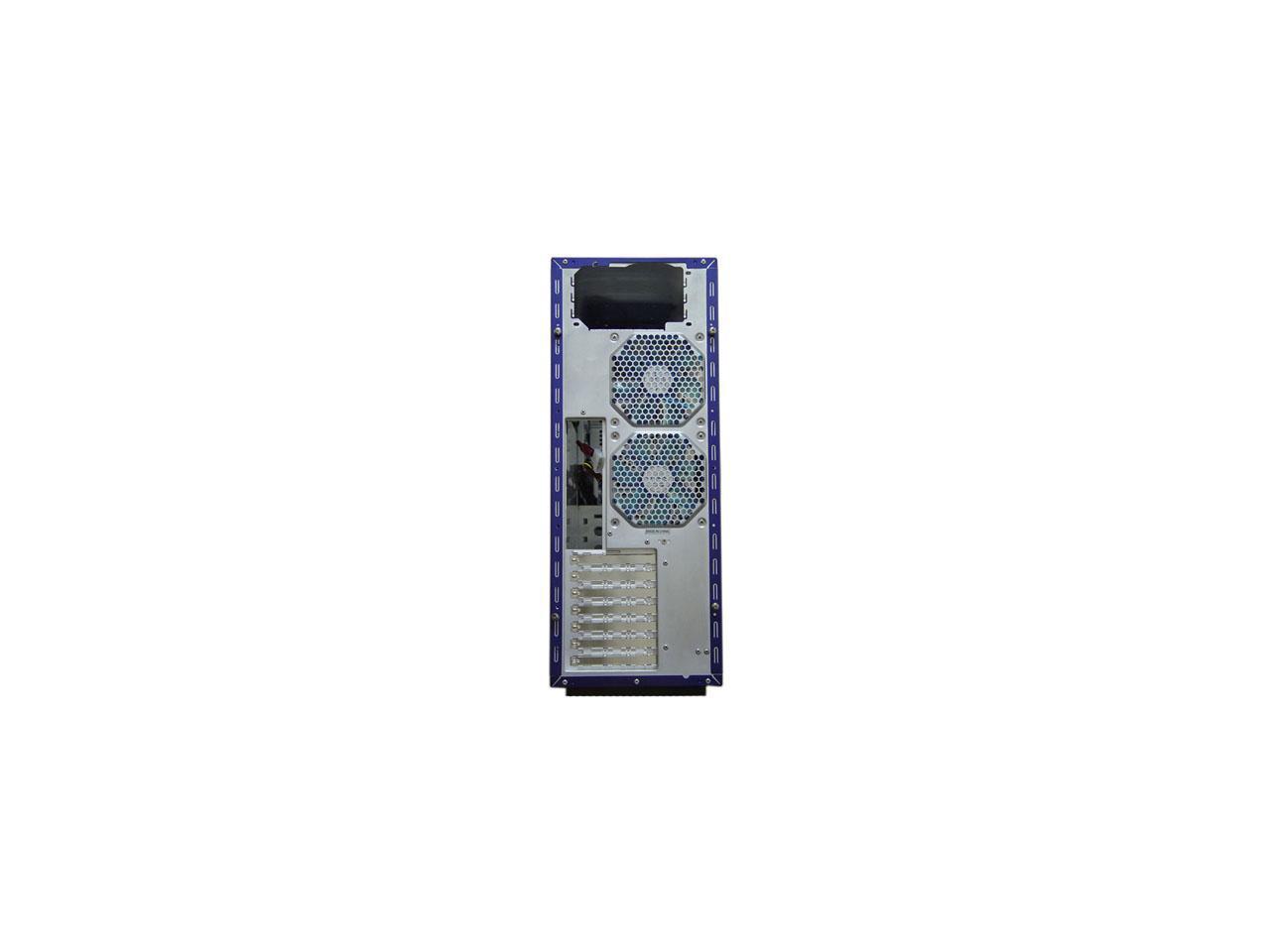 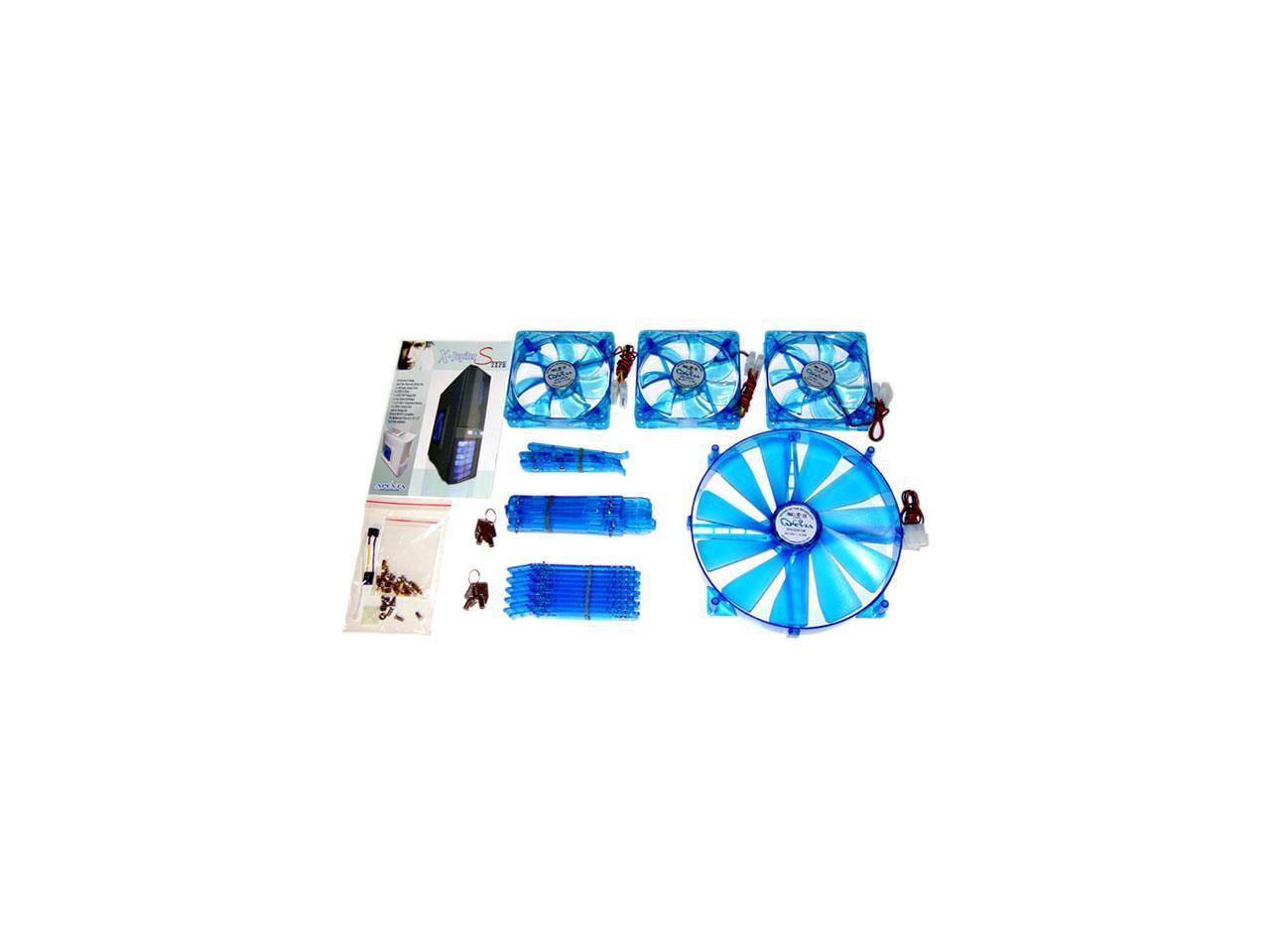 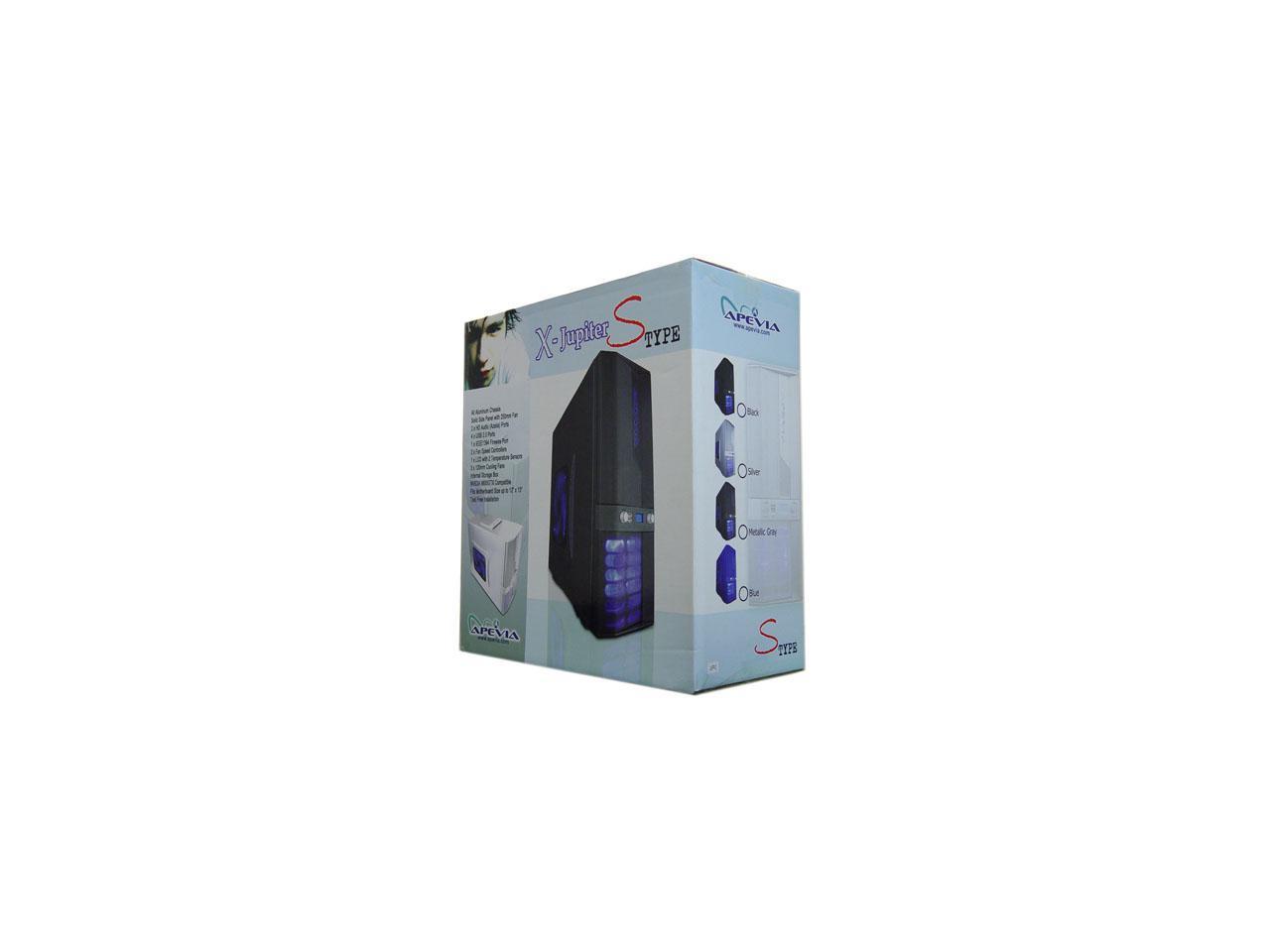 Pros: This case is HUGE..much larger than what I expected but I wanted something big for optimal airflow and room to expand. The USB,Firewire and audioports at the top of the case are very nice. The huge fan on the side keeps my hardware running cool. The standoff holes are labeled for easy mobo instalation. There is also a little storage compartment in the case for extra cable ties,screws,etc.This case looks GREAT will definently be an eyecatcher at any LAN party. This is a geat case for any SLI or Crossefire rig.

Cons: The CPU temp display on the front of the case is not that accurate there was about a 10 degree difference from what it said to what my BIOS was telling me but this may be my fault since the instructions said to use thermal tape and i just put the censor as far into the HSF sidefins as I could. No biggy just if you want a true reading check your BIOS or use one of the many temp. programs out there. Another small issue is I would have liked to see somewhat larger holes on the side of the case so I could hide my cables easier by running them outside where the side panel goes once again... no biggy just get plenty of cable ties.

Overall Review: After researching for a long time this was the best case I could find for my budget and it made my first build EASY.

Pros: Huge and I like it. This case is so big and has so much space I might move in with my parts inside. You access every part without bending your hand six different ways. The fold out stabilizers on the bottom (it has fold out stabilizers?) make it extra sturdy.

Overall Review: snapping in the parts was nice and easy with the screwless system.

Pros: The case does have a very nice blue color to it. The 250mm fan on the side is nice and keeps everything running cool. The front fan controls do not work. No matter how you try to set them up they don't control the fan speed. Be prepared, this is a full case. Much larger than a mid case. The Motherboard tray is nice and clean. Very sturdy construction, best price. It lights up the entire room when no other lights are on.

Cons: The blow hole on top doesn't come with a fan. I purchased an Apevia 120mm fan for the top. Case and cpu temps dropped 2 degrees C. The door only opens one way and is not reversible. Since the HDD's mount side ways you will need to have 90 degree plugs or its hard to close the side panel.

2 out of 2 people found this review helpful. Did you?
Manufacturer Response:
To set up the fan speed controllers, you would hook up the fans that you would use as intake fans together and those that you would use as exhaust fans together. Then, you would locate each corresponding "OUTPUT" connector ("cool air in" for the intake and "hot air out" for the exhaust) and connect that to the remaining male end of the the fan assembly. Finally, locate both male "INPUT" connectors and hook those up to the power supply. The fan speed controllers should work properly after that.
Aaron G.
Ownership: 1 week to 1 month
Verified Owner
THIS CASE IS A BEAST!9/24/2008 5:43:04 AM

Pros: This case can easily hold anything you can throw at it and then some. I like the side facing hard drive racks for easy removal of HDDs, the Temp LCD on front with the Fan controller (although i still dont think i have it working correctly, the directions are kinda vague). Not all the fans are LED lit, but this thing is a blue monster as it is, the front logo LED and the huge 250mm fan LED are enough to make your presence at a LAN party known. All in all this is one case with all the new funcitonal goodies, this is one great case for your new performance machine!

Cons: Few minor issues...I'm using this as an AMD/SLI platform for gaming, so i bought the huge CoolerMaster Hyper 212 Heatsink, and when i first put it together on the ASRock motherboard, the top of the sink was making contact with the huge side panel fan, so i ended up filing some of the copper tubing ends down so they wouldnt make contact. Also, the huge 250mm fan looks cool, but its more cosmetic, it just doesnt turn fast enough to really pull or push any more air in or out, the other case fans and the heatsink move a majority of it. The blowhole on the top doesnt come with a fan either, would be nice if it did to turn this thing into a wind tunnel.

Overall Review: Better instructions for hooking up the fans to the controllers, im pretty savvy but this took me a while to figure out. As a side note, my AMD 9950BE is running at about 35 degrees in heavy loads, probly as a result of heatsink and case together, but ive heard averages of 40-50. Specs: Apevia X-Jupiter case, AMD 9950BE CPU, ASRock 780aSLIx-WiFi MoBo, 8GB Kinston Hyper-X Mem, Coolermaster Hyper212 Heatsink, 4x Raptor HDD 150GB Raid-0+1, 2x XFX 9600GT/SLI Video, Vista Ultimate 64 Bit

Pros: It's a full size ATX case with a slick paint job. The screwless drive mounting system works. Intake and exhaust fan speed controls right on the front of the case. Speaking of the fans, they are nice and quite. You can barely hear them when they are turned all the way down. At full power there really isn't much more noise. Case door is also metal. The entire case is aluminum, so it's lighter than you would expect. Good stamping, so there aren't any sharp edges inside the case. USB ports on the front and USB, firewire, and audio ports on the top. Place for an extra exhaust fan on the top. LCD screen built in to monitor, well, whatever you put the probes to.

Cons: None, only some general comments (see thoughts).

Overall Review: There are only a couple of things about the case that I would change, but I wouldn't call them cons. I would get rid of the quick release over the card slots. It just doesn't hold them tight enough, although it probably would with a little work. It just didn't feel secure enough for that ridiculously big GTX 260. I would also like the header cable for the front and top panels to be longer. They were long enough to reach, but a little more length would have allowed me to do some better routing.

Pros: Awesome tower!!! Has room for everything, including my big hands to work where I need to. I would reccomend this style of tower to anyone who needs the space to work and keep things cool. The fans are doing the job and then some.

Cons: I knew there would be some additional noise with the fans, but thats okay with me. Not bad noise, just some noise.

Overall Review: I like the style and the cooling. Maybe come up with an airconditioned unit?

Pros: large and very spacious inside so easy to move around at least until you fill up all your drive bays. then it is going to be as crowded as well any other tower. large 250mm fan on the door panel. option for a 5th fan on the top of the case for exhaust or intake. metal break away tabs are strong enough to hold yet easy enough to break out when needed and with little physical effort. plastic feet came not broken.

Cons: the tape used to label "cool air in" and "hot air out" fell off the wires well before i received the case and was only able to even find one of them when i opened the front panel to the external drive bays. so no idea which wire is which. one of the front knobs for the air flow control grinds when you turn it while the other knob turns smoothly. the tool box that comes with it had a broken tab where one of the two screws hold it in the case which i did not notice till i went to take the box out. two of the rail guides had there metal rivets fall out due to an over stressing of the poor quality plastic that they sit in. one of the guides passed QA even though it was clearly cracked all the way threw the plastic where the rivet sits and threw half the height of the guide. aluminum stamping for stand off holes for the mother board are so light that some did not stamp and others cant be read.

Overall Review: very light and thin aluminum in comparison to my store bought HP that was a prefab not sure if one could consider this a pro or a con so much as a showing of craftsmanship. i have not put anything into the case yet. and as such have not yet tested the fans or electronics. while i have listed more cons than pros i still expect the installation process to not be to difficult. and most obstacles can be overcome with patience and a gentle hand. but again unfortunately the quality of the plastic used for the rails and tool box is to low for the force used in the factory assembly process to prevent breakage. or at least it was on my example.

Pros: It does every thing it says. no problems w/ install. I was shocked to know how big the side fan was.

Cons: The wire came tangled, but thats not that big of a deal.