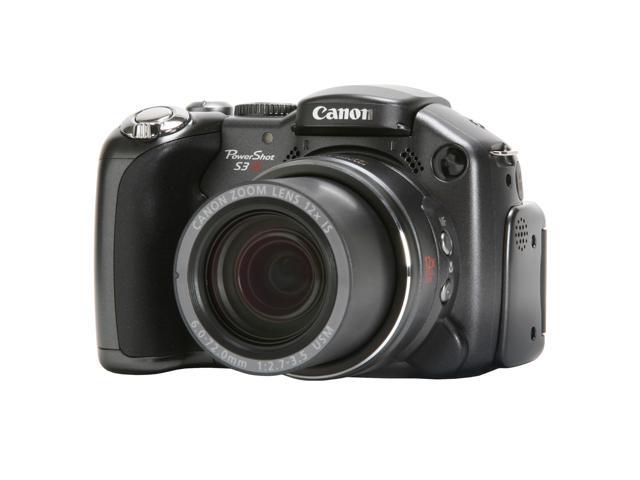 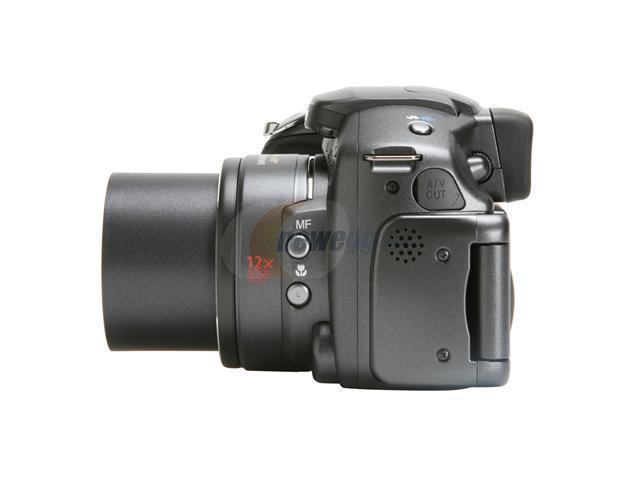 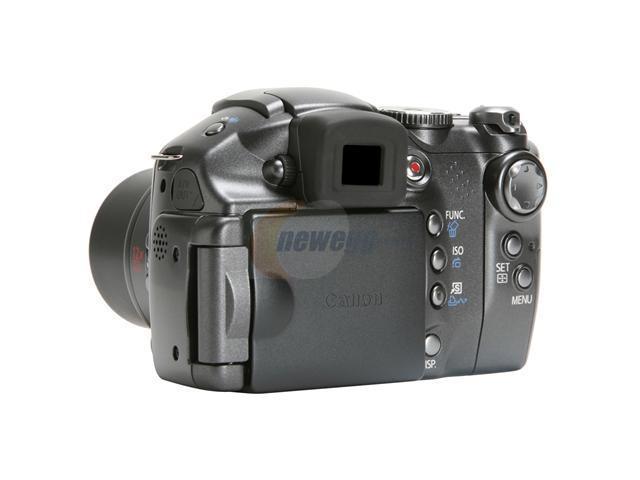 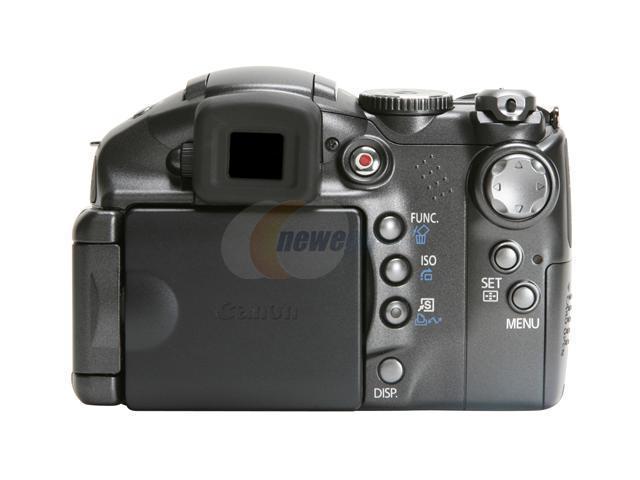 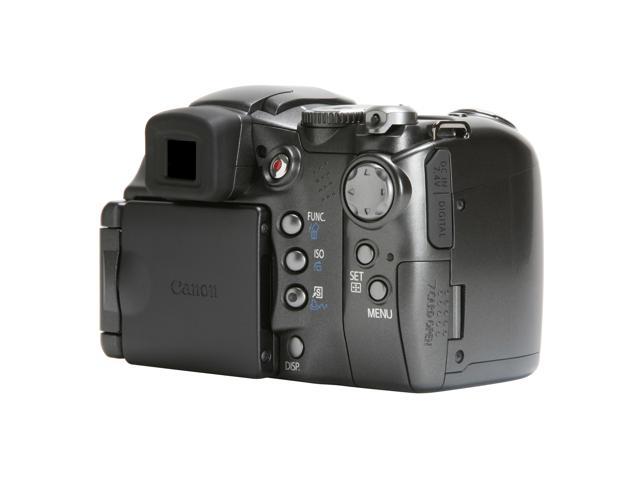 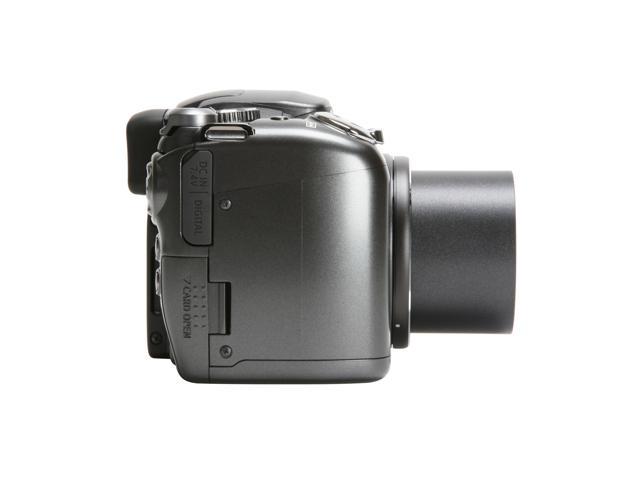 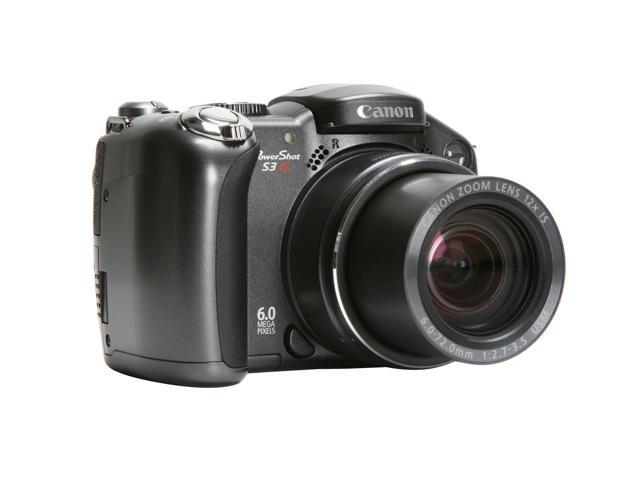 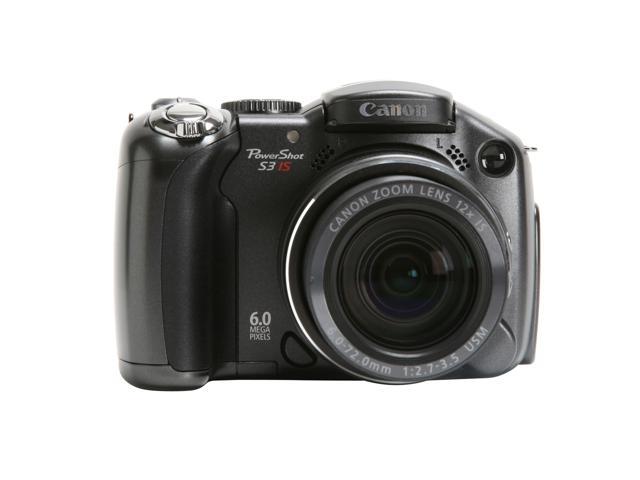 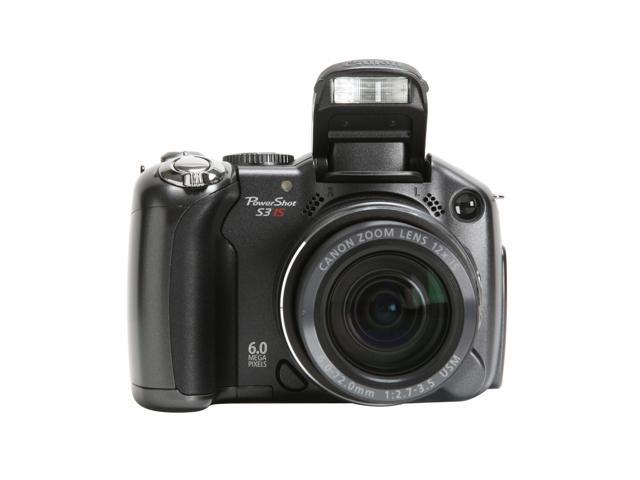 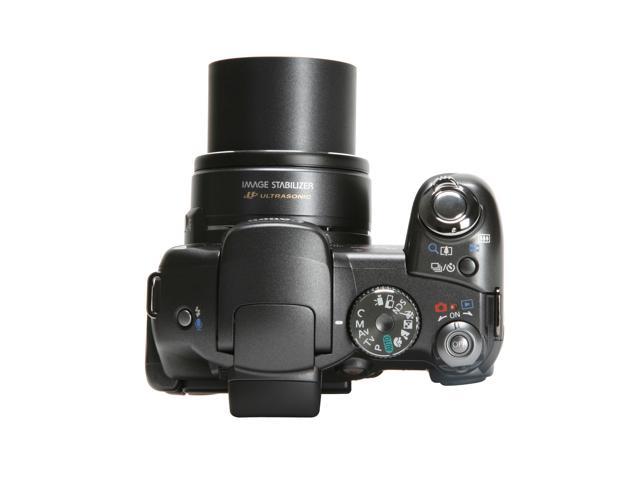 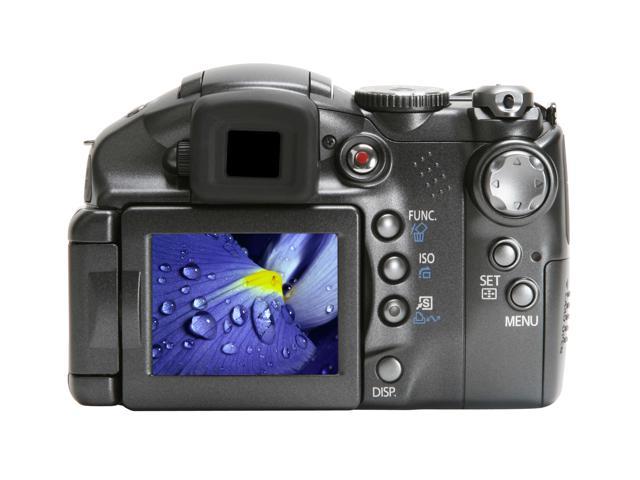 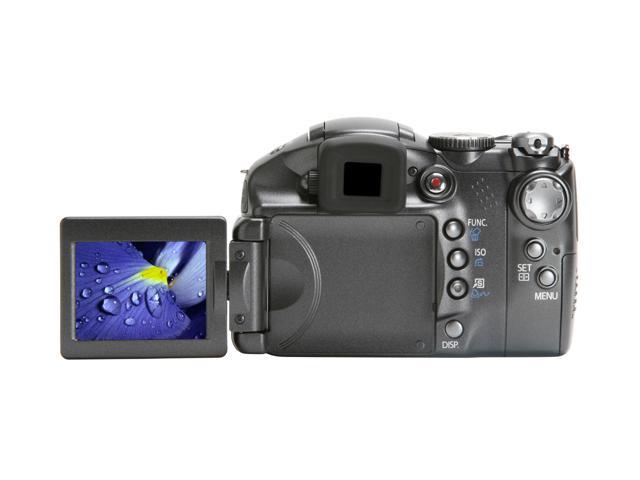 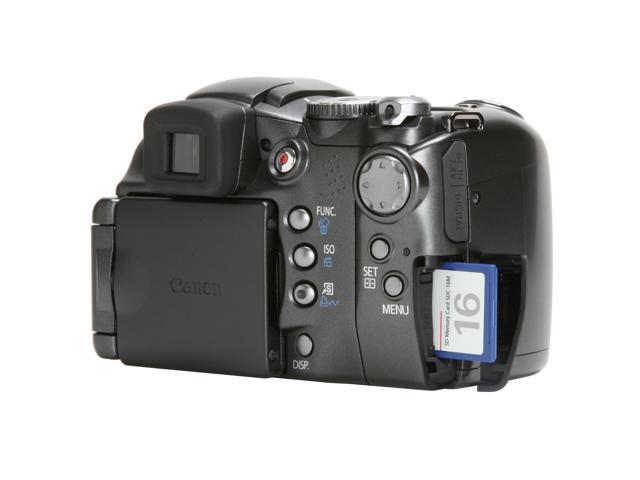 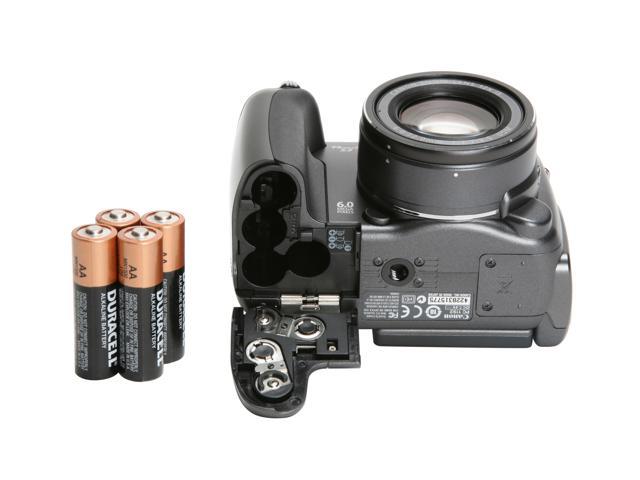 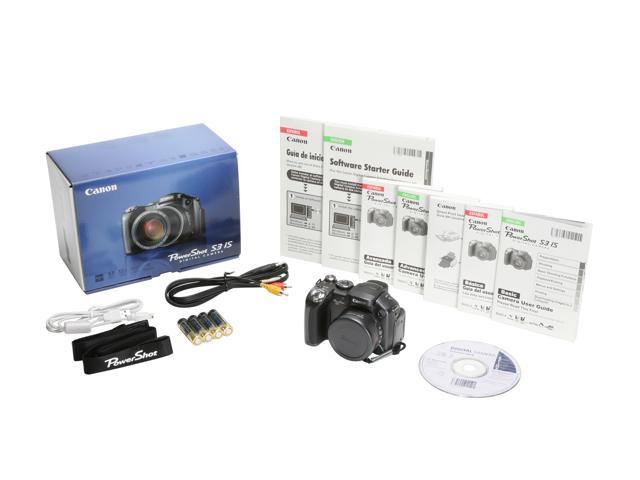 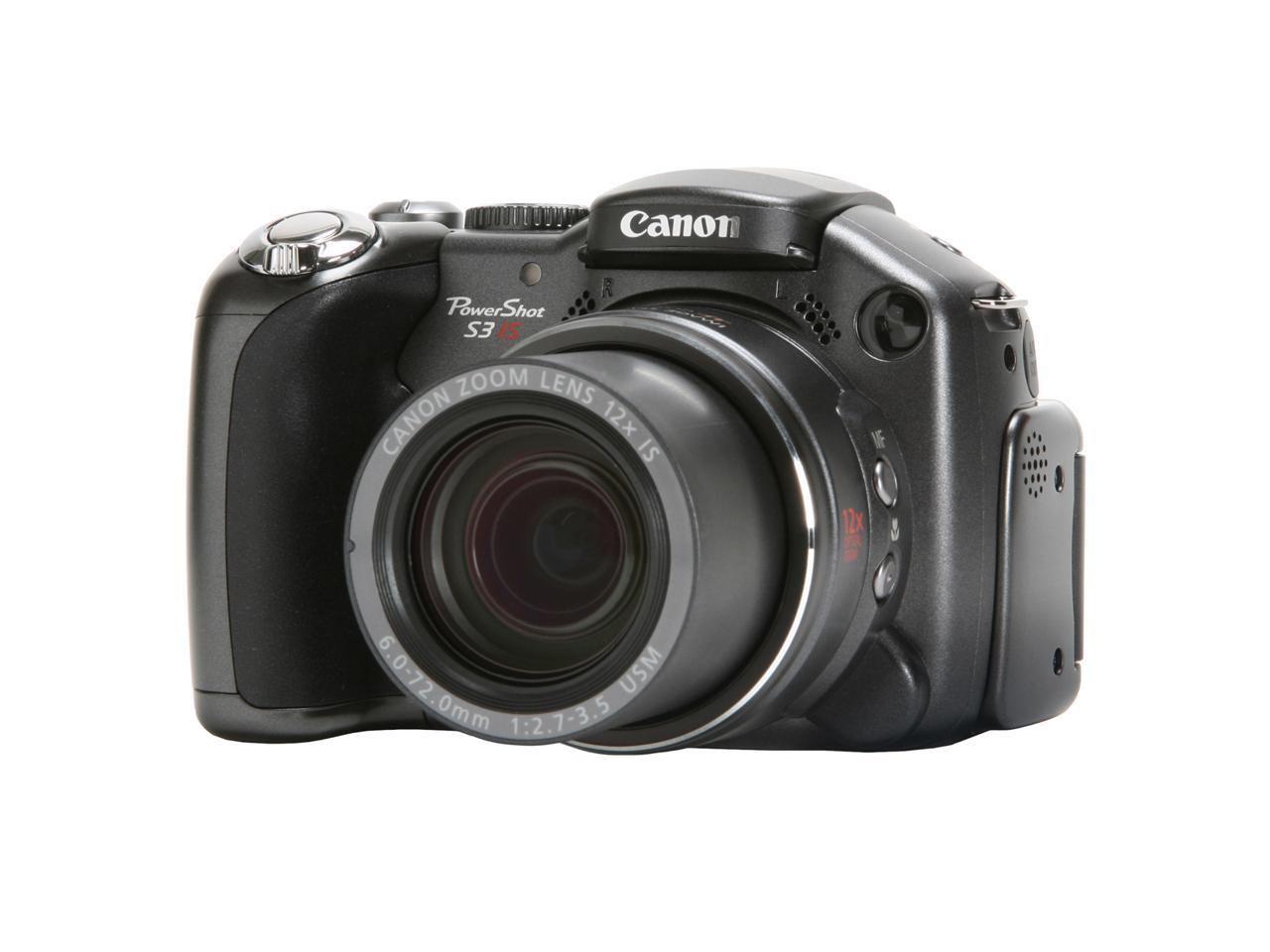 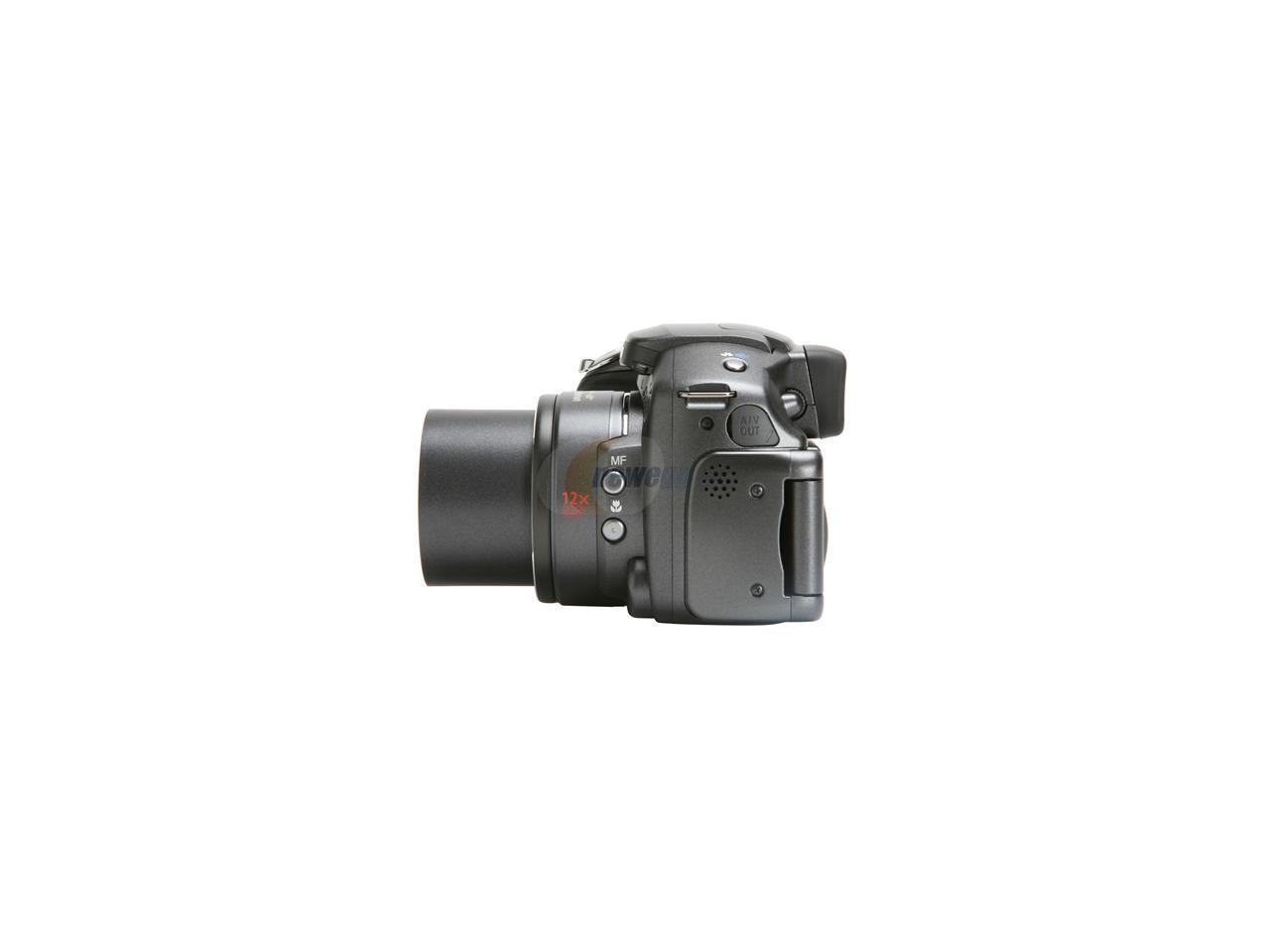 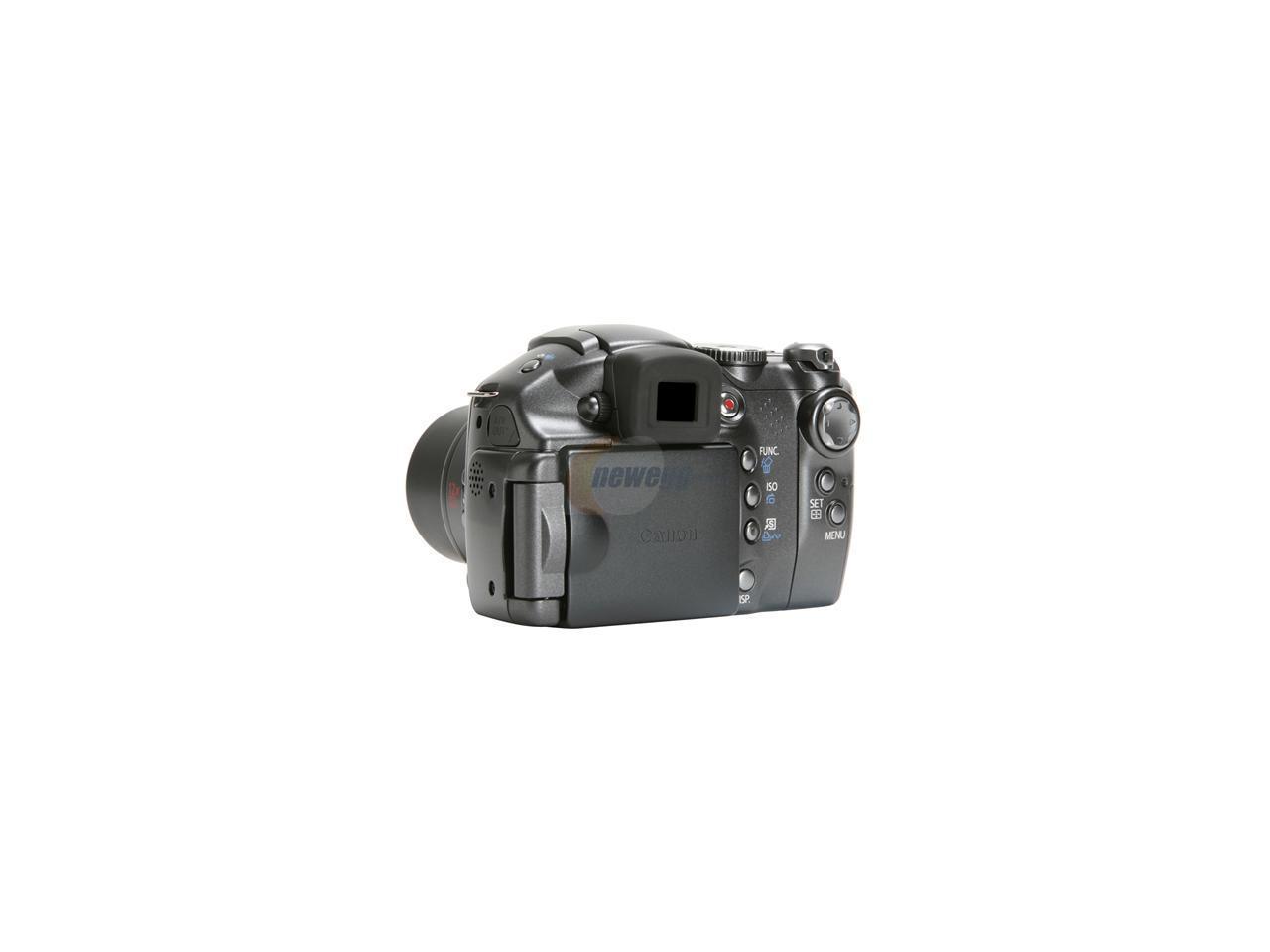 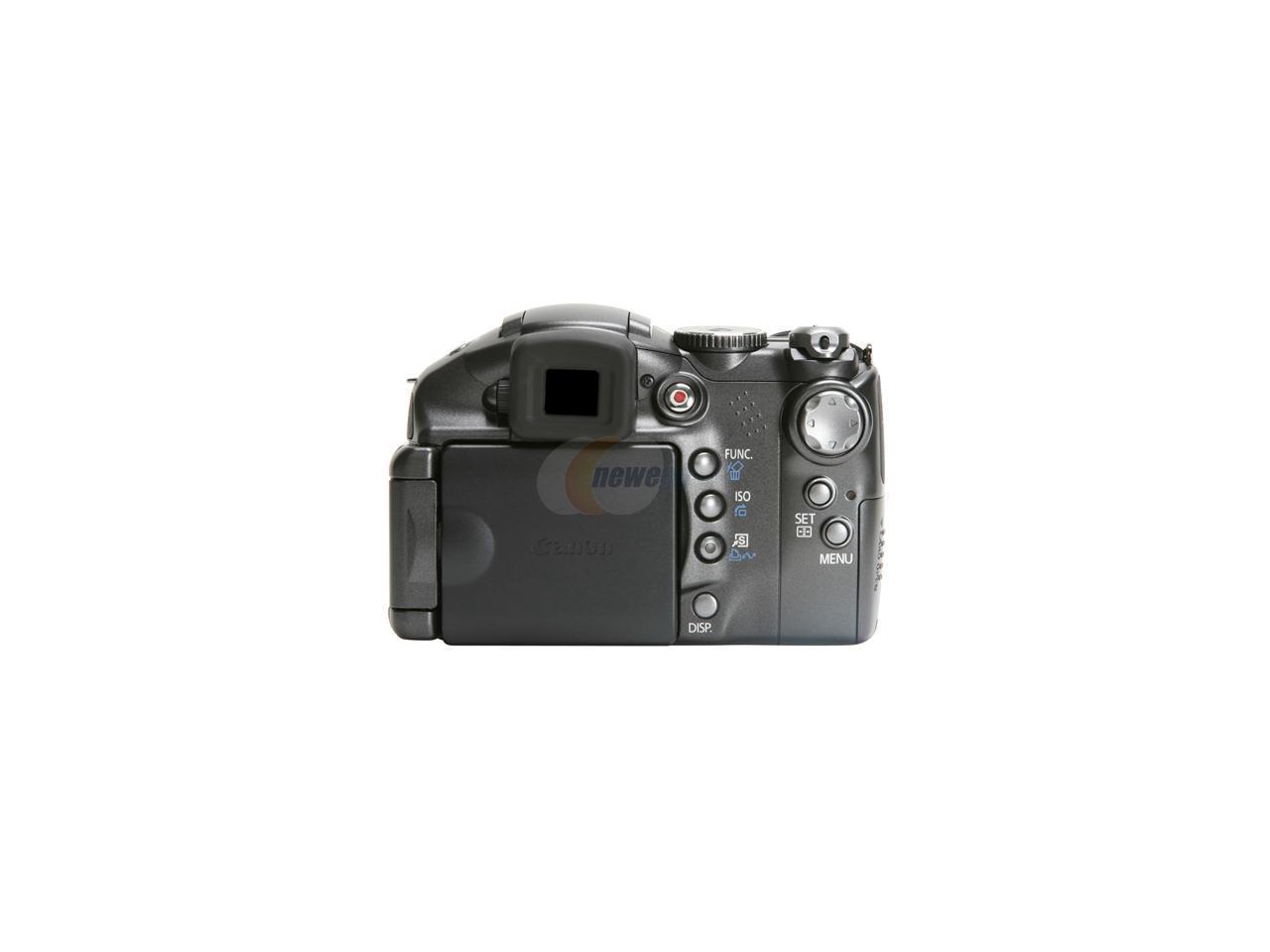 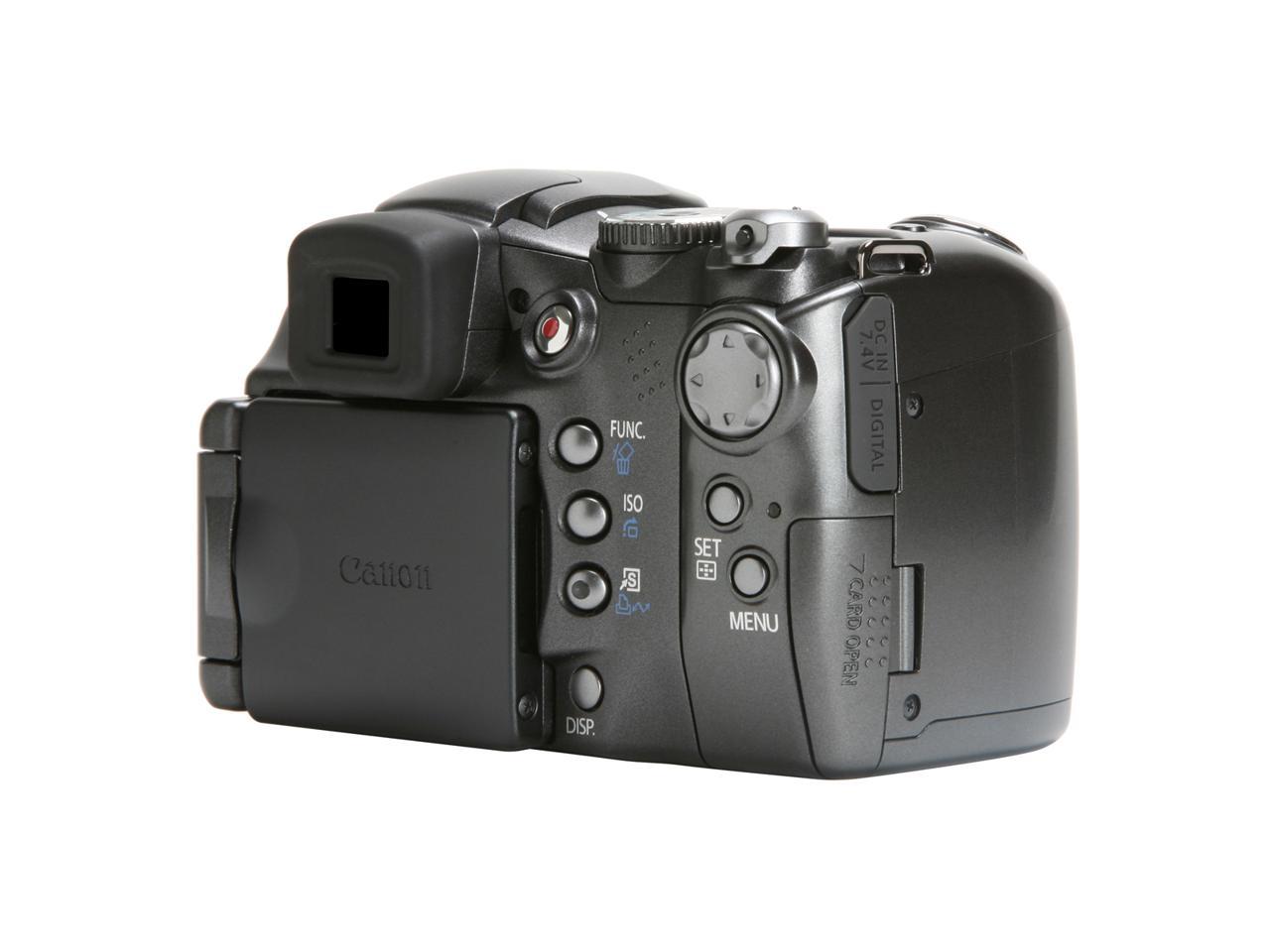 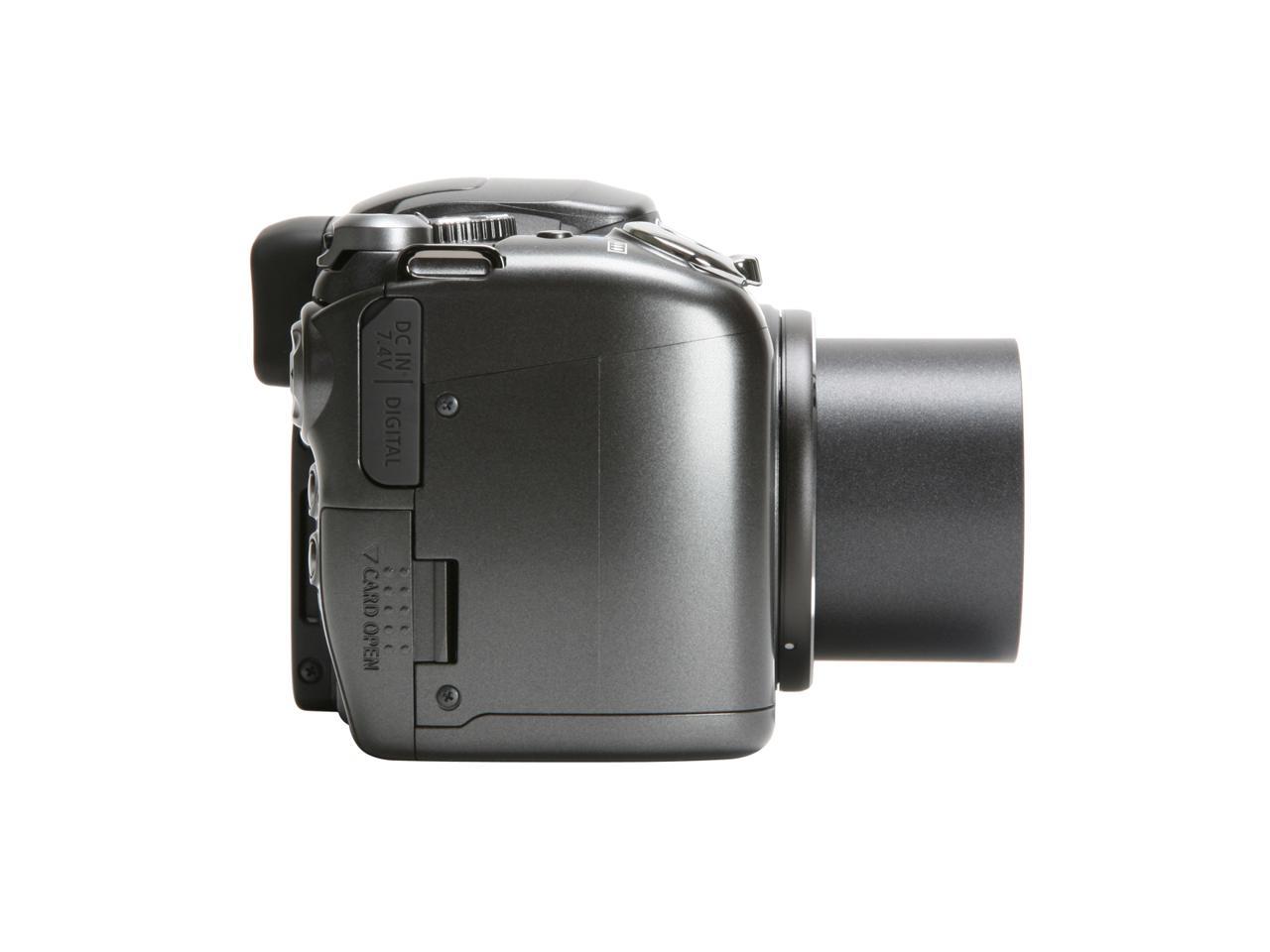 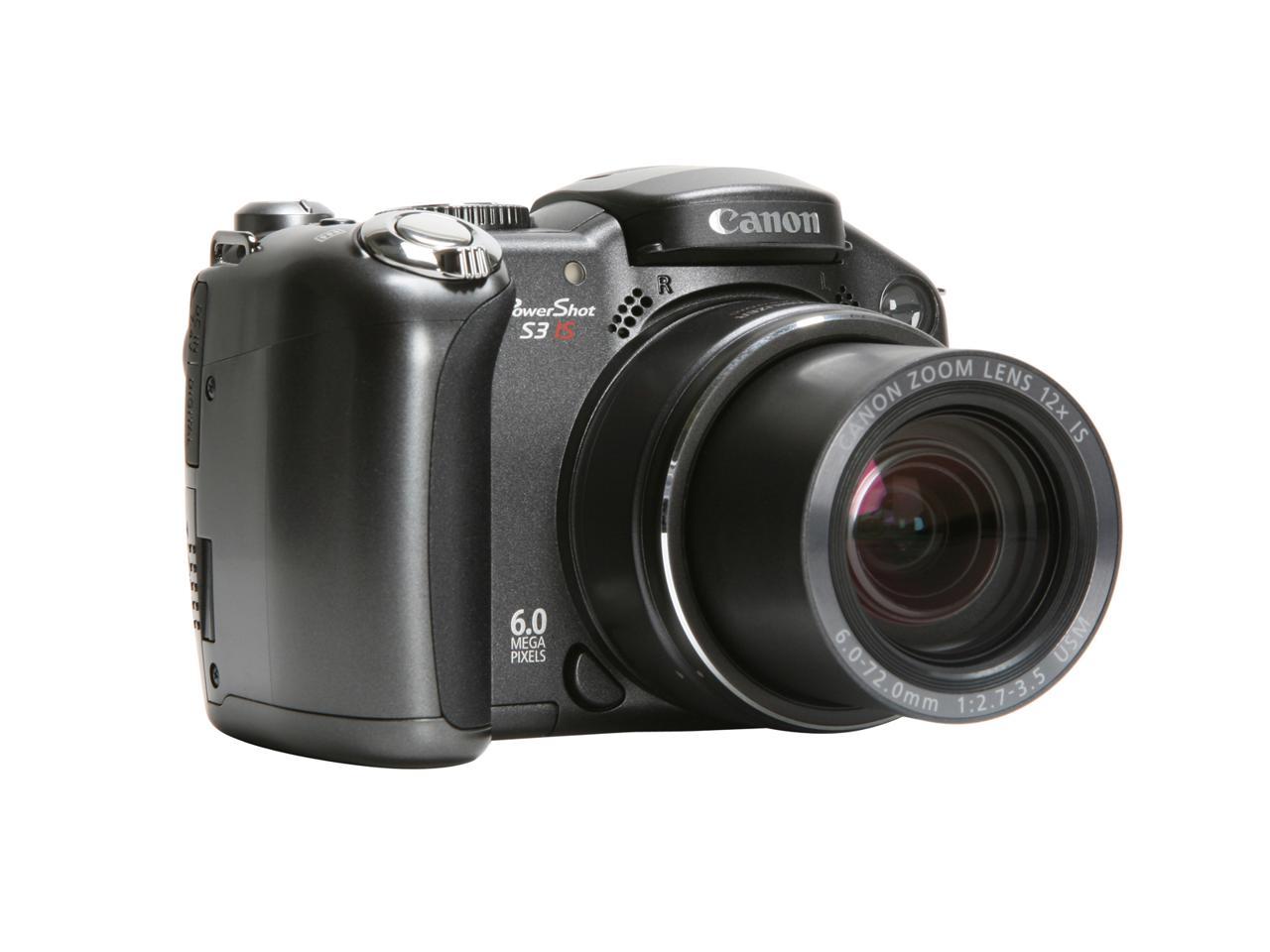 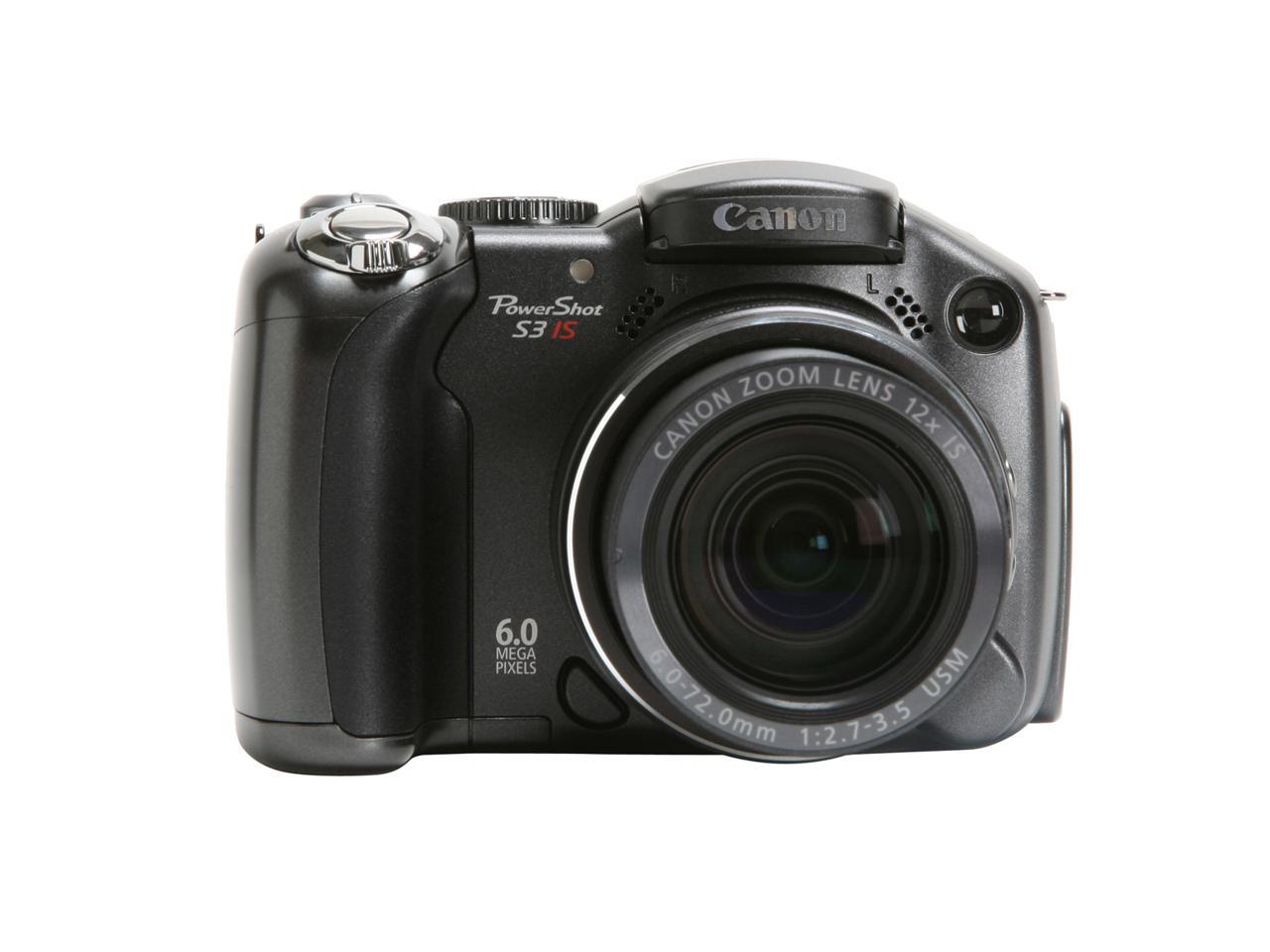 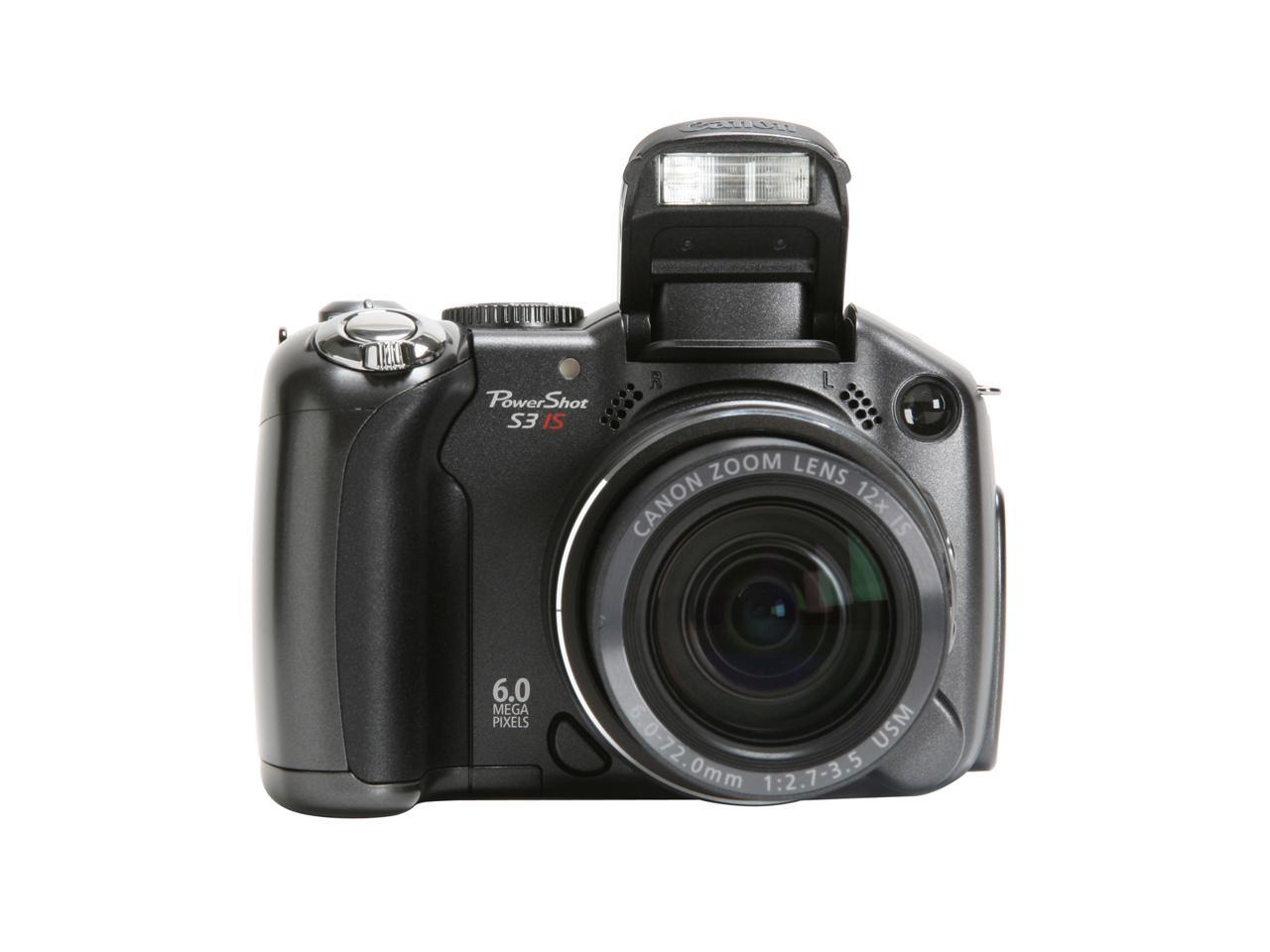 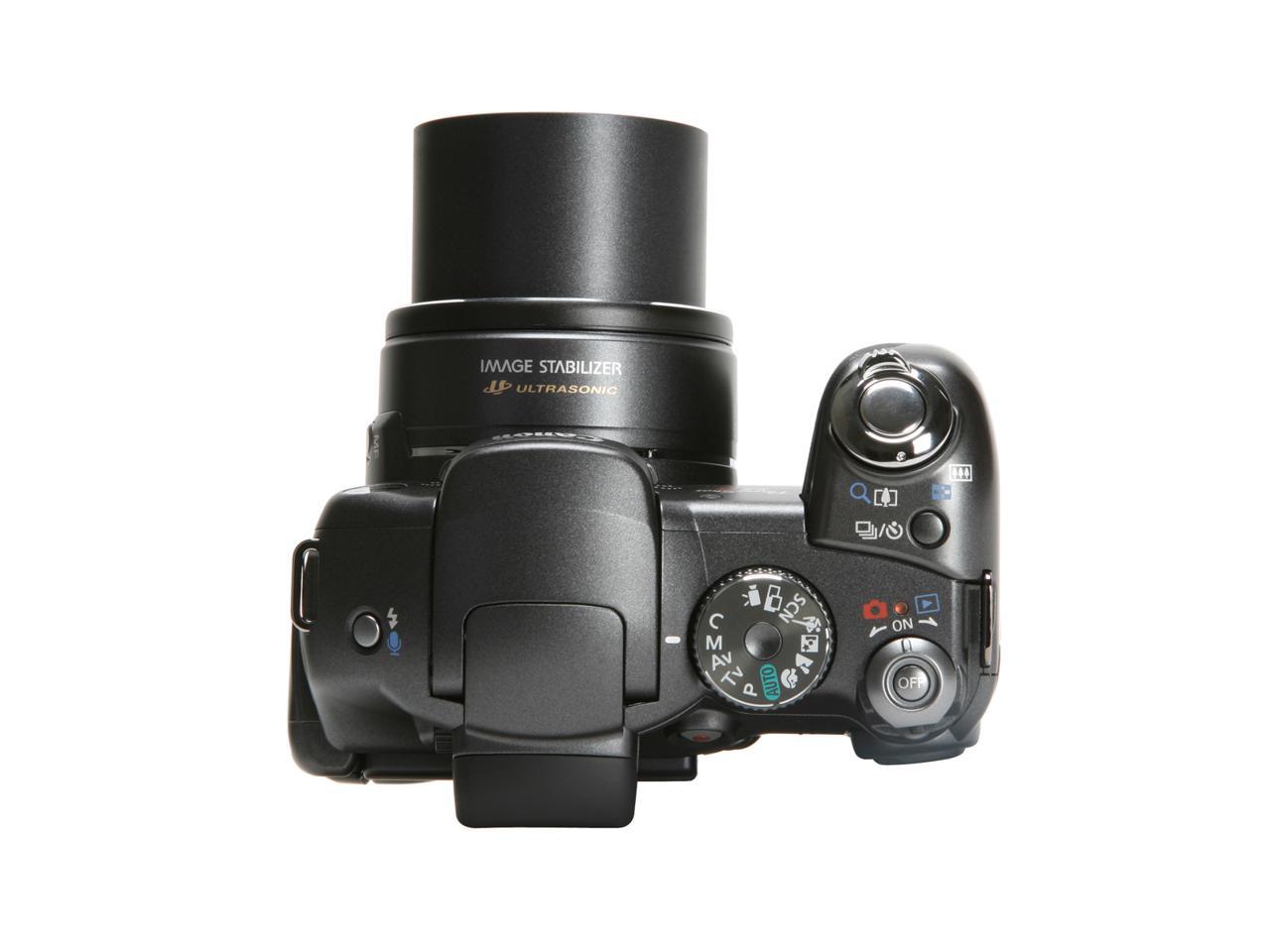 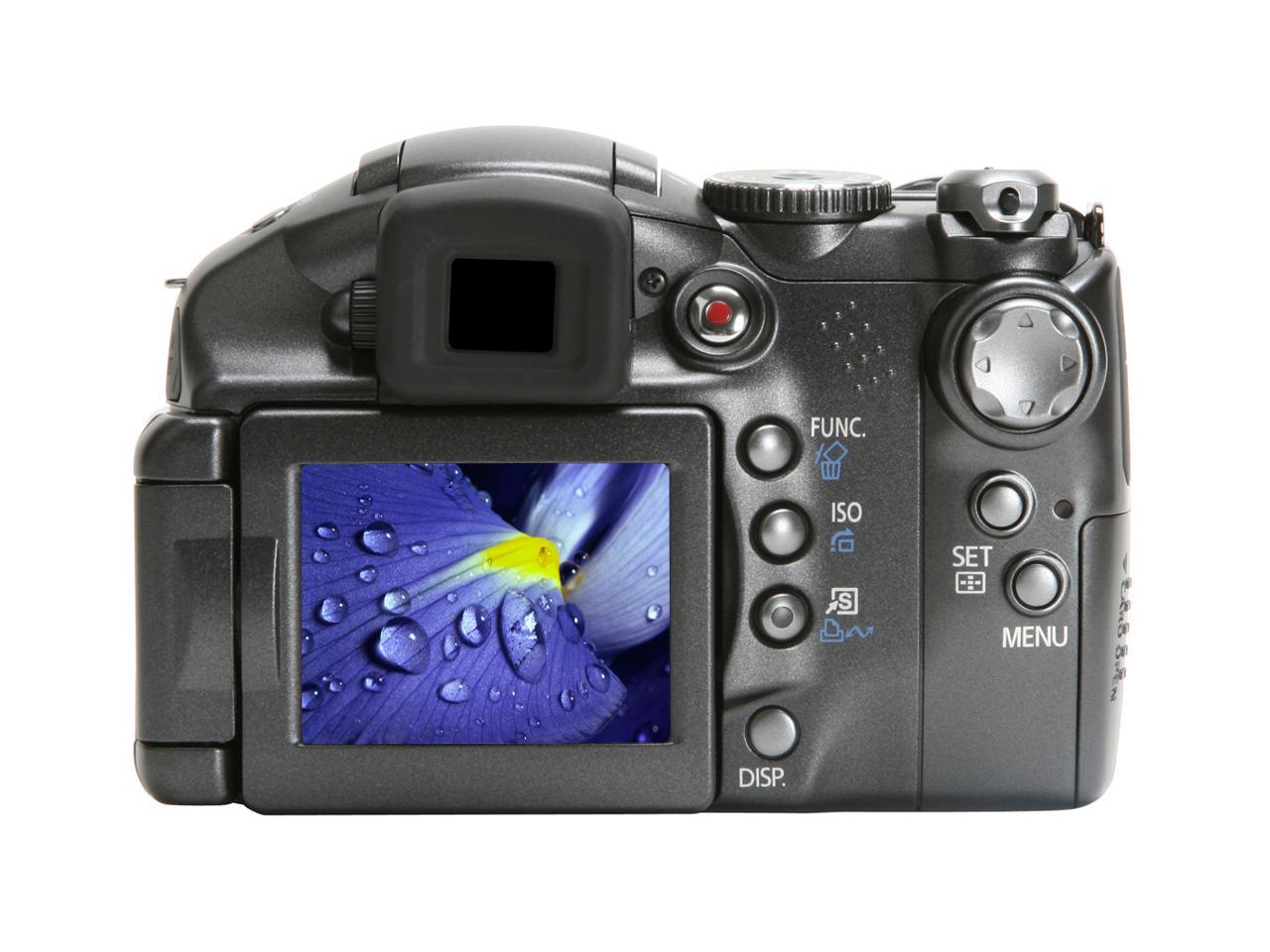 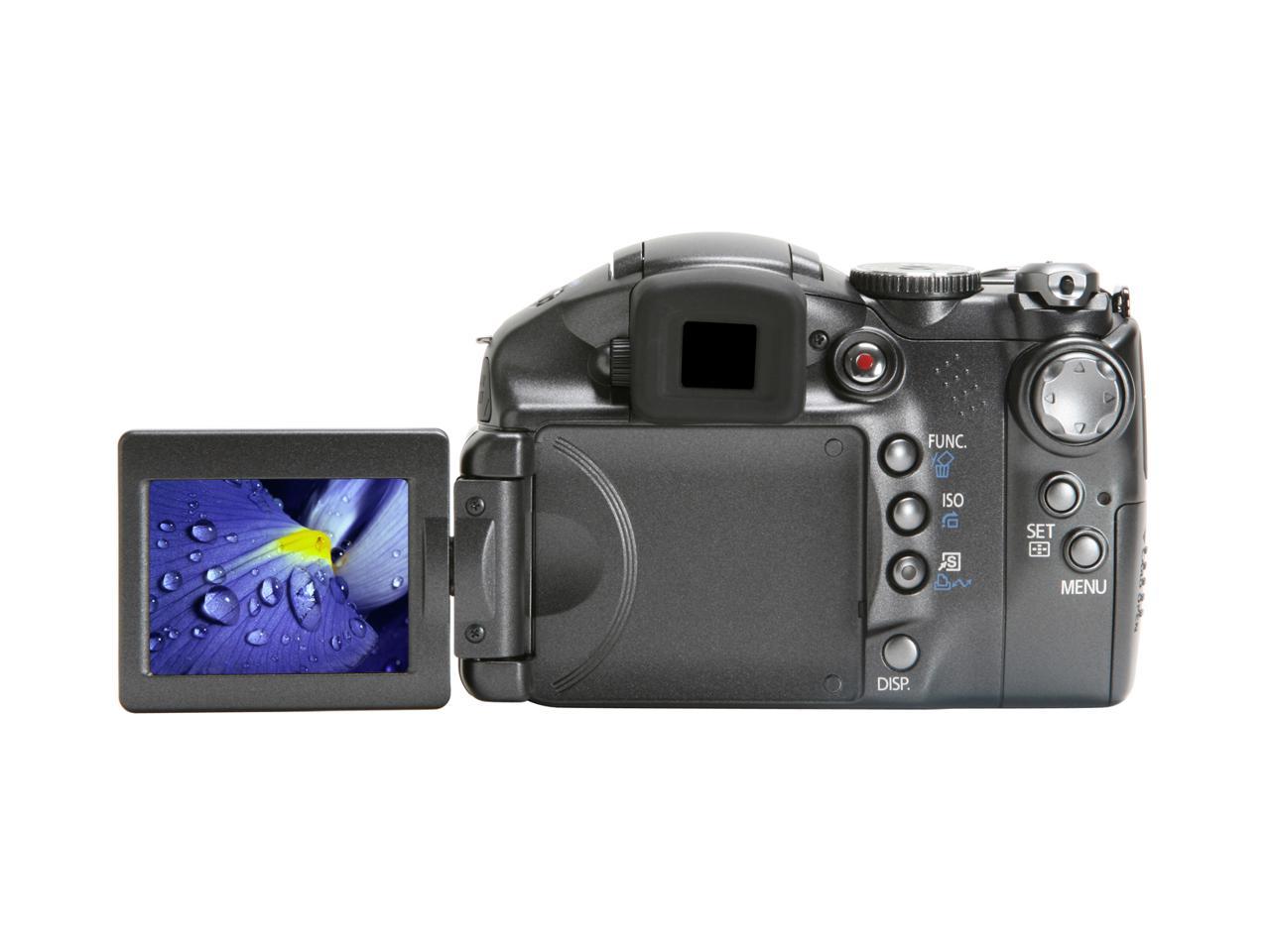 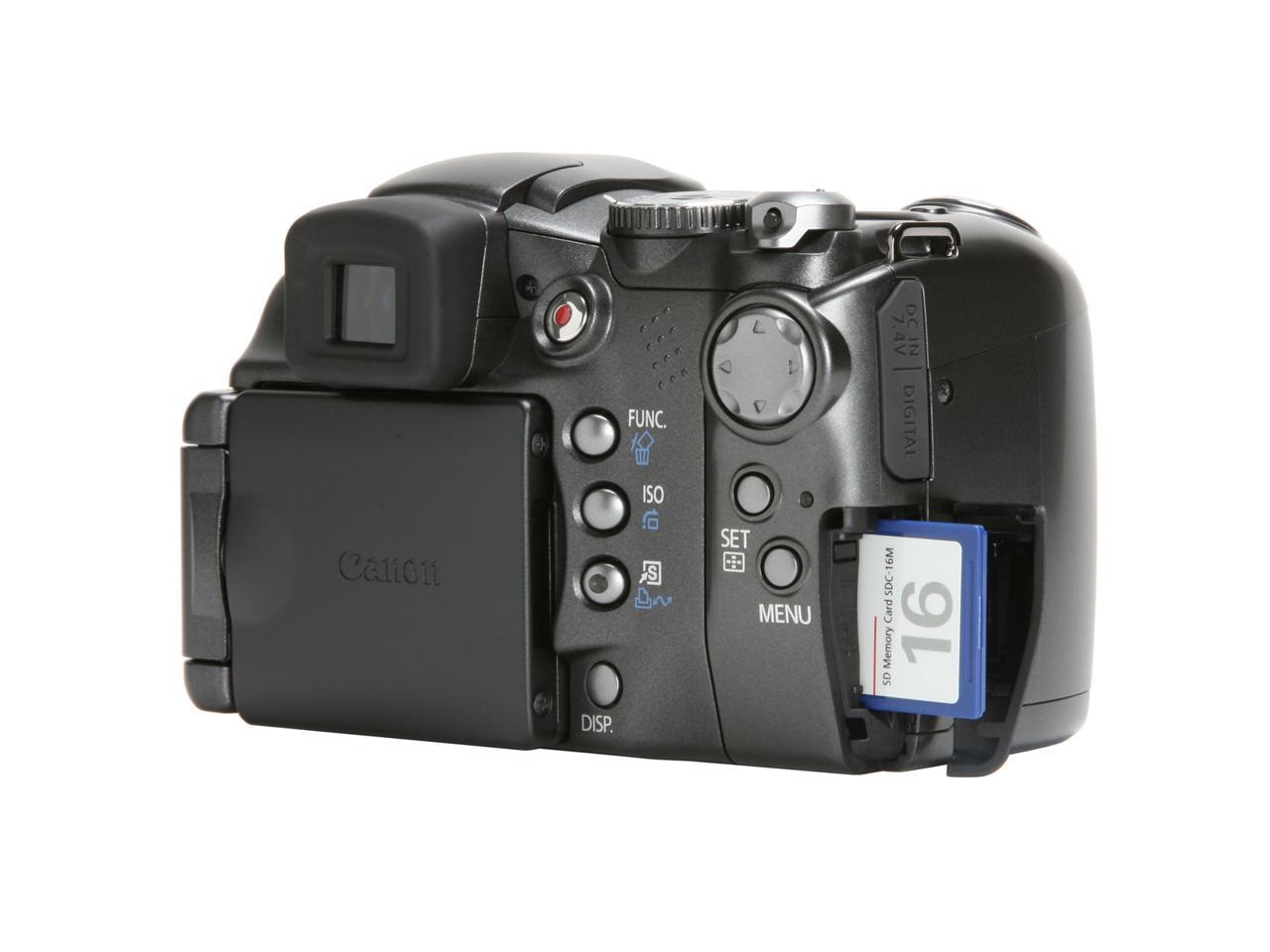 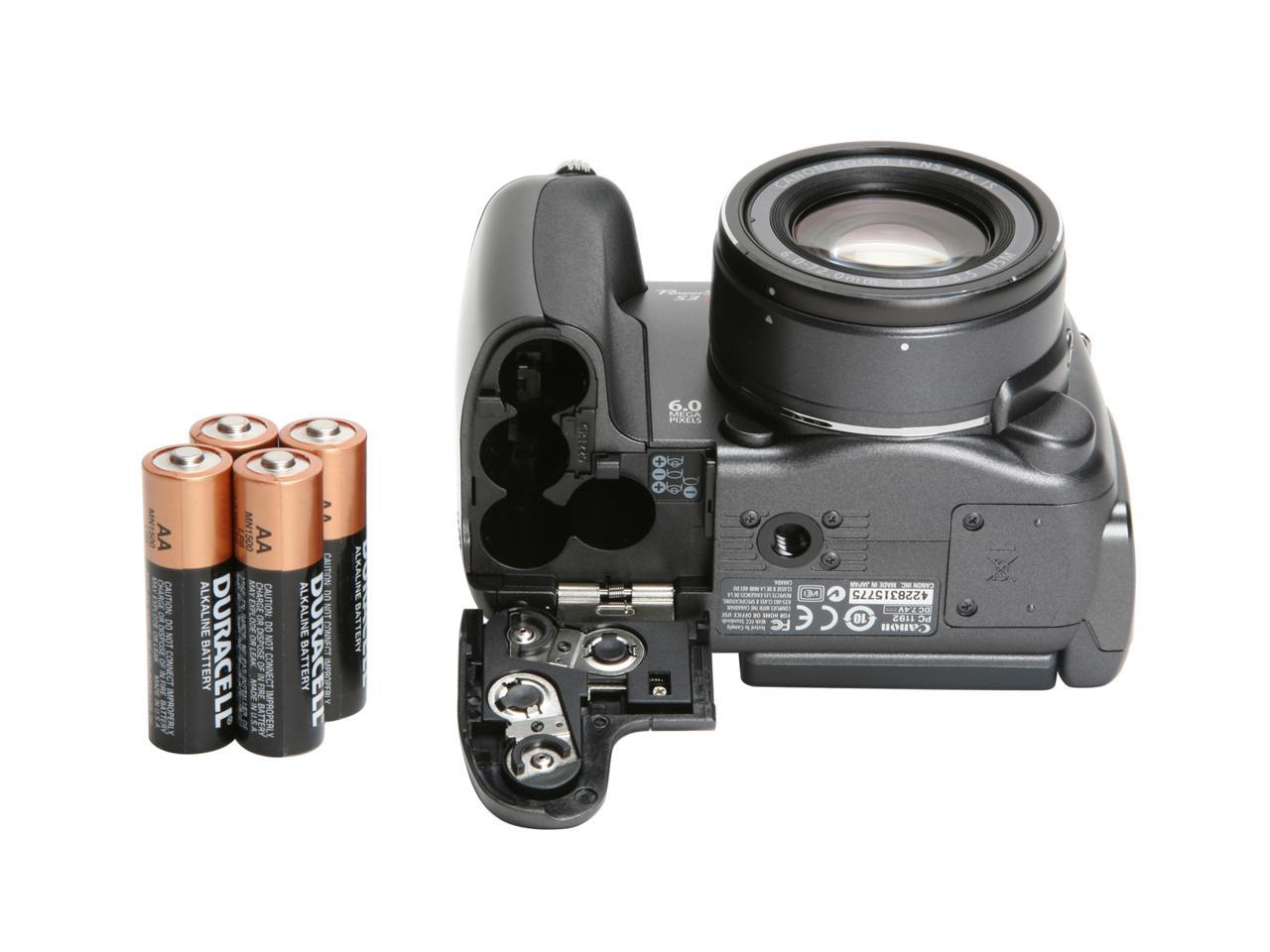 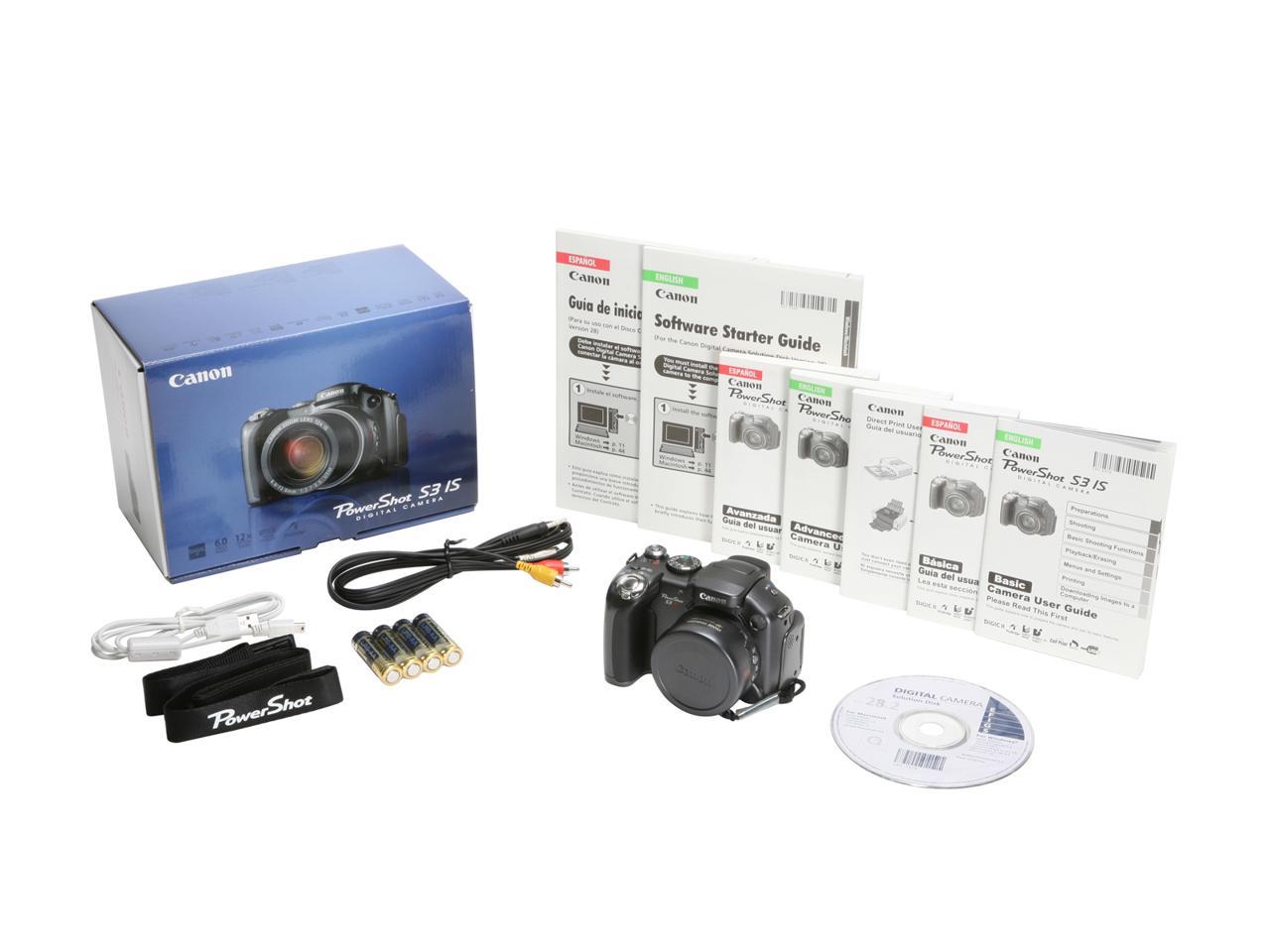 (154) Write a Review
OUT OF STOCK.
Overview
Specs
Reviews
This version of Canon's flagship image stabilized ultra zoom PowerShot has been wildly popular since the day it was released. Unlike the S2, the PowerShot S3 IS is a relatively minor upgrade to its predecessor, much more of an evolutionary change than a wholesale reinvention. The basic spec (aside from the sensor) is pretty familiar; 12x optical zoom, flip 'n' twist LCD, tons of photographic control and advanced movie mode with stereo sound. The amazing Canon DIGIC II processor optimizes image quality and makes image processing faster than ever, and the ultrasonic motor makes the zoom function almost silent.
With a full range of shooting modes for the novice, and precise control for the experienced photographer, this great addition to the Canon line is great in almost any shooting situation. Spontaneous video recording is available at the touch of a button, at 60fps for up to an hour. Still shots can even be taken while shooting video using the proprietary MovieSnap feature, making this a fully featured photographer’s dream in a compact model at an excellent price.

Learn more about the Canon S3 IS

Pros: This camera is really nice, and the lens is better than my S1-IS. A far superior Auto Focus in low light than the S1, and far faster write speeds so the cycle time between shots is greatly reduced. The 12X optical shots are extremely good with only slight red fringing on white surfaces under certain lighting conditions. Adjustment of the white balance might take care of this, but it is only noticable when doing a heavy zoom on the computer picture. I use a Raynox 1540pro 1.54x tele-extender with this camera, and 18x optical with this lens is also very good. The Macro capability of this camera is incredible. 0 to 10cm range in super macro mode .. DOH .... Tried it out on a very small agate at under 2cm, and was very impressed.

Cons: My S1 has a remote shutter controller, but the S3 does not offer this option. I will miss the remote feature.

Overall Review: Canon did not have any of their plastic S3-IS adapters in stock, and they only make a 58mm adapter anyway, so I used Lensmate adapters and am very happy with them. The lensmate adapters are 6061 aluminum, and come in both 52mm and 58mm. The 52mm adapters allow the use of 52mm filters from my S1, and reduce the shadowing caused by the 58mm system when using flash fill at close range. I did not see any vigneting using 52mm instead of 58mm accessories. An additional benefit of the 52mm is no AF interference when using a rubber lens hood.

Pros: Image stabilization, movie capabilities, lens flexibility, manual controls, and flip-out lcd are the reasons I bought this camera for our leasure camera. I also have a canon 20D, but sometimes I just don't want to haul all my big gear, and the S3IS leaves me with a good portion of the manual controls I'm used to on the 20D. I find the camera to take consistently good shots in medium to good light. The IS is really effective, and the movie quality is really good in good light (IS helps there too), sound on the movie mode is exceptionally good. The movie quality is just as good as m very expensive JVC GC-MC500U in good light, actually better with the IS, it's just not quite as good in low light. Also good battery life is nice

Cons: It's not a pocket camera, but it's light enough to take anywhere. The ISO performance is about average to good for consumer cameras, I find up to ISO 400 is good, 800 is a last resort. For ISO performance reasons, it's not the best indoor lowlight camera, Fuji's F30 or F10 or and dSLR is much better in this regard. Also I've noticed focus up close to at times miss, but not bad. Finally, I wish the video mode was MPG, while the AVI quality is excellent, it also produces extremely large video files, better invest in some big cards and hard drives if you plan to do alot of video, hopefully canon goes to mpg in the next release. I also don't like the manual flash pop up, it should beauto pop, my wife constantly take pictures without flash that really needed it because she didn't notice the raise flash message.

Overall Review: I bought this camera because for my needs it's one of the best all around performers. Great lens will give you the reach you need outdoors, IS will help on the long end and with low light scenery. The movie mode is also of good enough quality that for short segments (minus the large file size) it could easily substitue for a camcorder. This camera will never replace and SLR, but it gives you a whole lot, really an amazing amount when you consider the price difference.

Pros: First of all, I love looks. Many of the "s3-type" cameras from other companys, just look and feel cheap. The s3 is my first digital camera and I really like it. It takes great wildlife pictures at good resolutions. I had to do alot of reading on Digital cameras so I could understand ISO speeds, color schemes etc. Once you get the hang of it, this camera is a great bang for the buck. The video quality is excellent, but the way it is compressed and the size, could have been better. At max res, on my 512 mb card I can only squeeze in about 4 minutes of video. And for max video, its about 32 minutes at the resolution. I recommend this product to anyone looking to buy a HIGH quality camera, for a great price.

Cons: For a non SLR, if you dont know anything about photography you can be confused and upset. When i first started I couldnt understand why i was recieving grain in my pictures. I am still learning to this date, but please if you buy this, READ the manual so you dont have bad experiences. I had problems with my card and formatting it, but I figured it all out. After you get the hang of using the camera, give it a few weeks, and I cant think of anything BAD about this camera. I love it.

Pros: Based on my research, this camera is the best compromise available for under 400 which can take both quality movies and quality photos. It also has a wealth of features.

Cons: While it takes both quality movies and quality photos, there are other digital camcorders/cameras that can do a better job on either one of these individually. Also, the movies require a lot of space. We got a 4 GB PQI 150X card from NewEgg at a great price that works fine in this camera.

Overall Review: I was very pleased that NewEgg readily replaced the first camera we received. That unit emitted a whining noise in movie mode. The replacement is much better, although a whine is still sometimes noticeable.

Pros: I have always been impressed with the canon company... They pack a lot of functionality and detail into this machine. The usability has incredibly increased since my last model I bought years ago - the A40. Using the buttons is a smooth process.. it all centers around the little direction thumbpad. This has full camcorder quality video functions - 30fps at television resolution and 60fps at youtube resolution. It also functions as a sound recorder... A one gigabyte card can do 1½hours of high quality sound... enough for a long lecture. The quality of the recording is miles above older technologies - such as microtapes. There are lots of preset options for taking excellent quality photos at dusk, of greenery, of sporting events, etcetera

Cons: The camera will boggle your mind with all it's detailed functionality - so be sure to spend a few evenings curled up with the manual

Overall Review: As some have mentioned below the lens cap is not attached by anything except the vacuum which is created by the shape of the cap and the lens. This is a good reminder to handle the camera with honor and care.

Pros: This camera takes absolutely fantastic shots with the "auto" mode if you just want to point-and-shoot. The Image Stabilization is wonderful - it really helps me out, as I have pretty unsteady hands.

Cons: The instruction manual is a little bit difficult to deal with. It takes a while to find specific things, such as manual focus, or how to set it on macro mode for extreme closeups. This might be my fault more than the manual.

Overall Review: I have owned and used a few other brands of cameras that were purchased in a similar price range, but this one is far and away the best digital camera I've used. It's gotten me excited about taking pictures again.

Pros: The Super Macro function on this camera because does such a great job with macro shots. Image Stabilizer, 12x Zoom, 15" - 1/3200 Shutter speed just to name a few of the great features on this camera. Overall great camera.

Overall Review: Most people think that the higher the megapixels on a digital camera, the better the picture, but that really isn't true. Megapixels has to do with how much you can enlarge the picture before it becomes pixelated. Picture quality has more to do with how good of a lens the camera has. Being a Canon, this camera has a great lens. So, even though this camera may seem like it has a relatively low MP rating for the price, don't let that fool you, it takes great pictures. I definitely recommend this camera and once again I recommend Newegg.

Pros: Lottsa features, great camera to take you from point/shoot to dSLR (which I plan to do at some point). Put in some time, and you'll learn not only the camera, but photo techniques as well. I like the focus, the flash output control, ISO control, and that you can control aperture and shutter speed together in Manual mode. Great zoomer. I haven't used Auto mode since the first week I had the camera.

Cons: Manual focus is awkward to apply; flash output control is available in only three levels in Manual mode (silly), while in other modes, you can control it in 1/3 stop intervals. Build quality is good, but shutter button feels quite loose.

Overall Review: Spend time with the manual, and get a book on digital photography. Don't get this camera if you plan to point and shoot your life away. This camera is a great learning tool. It will teach you photography and camera basics, and you can use that knowledge to taske better pics with this camera.