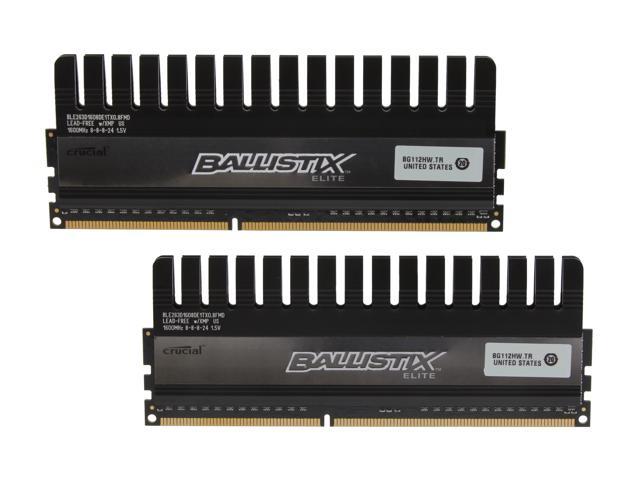 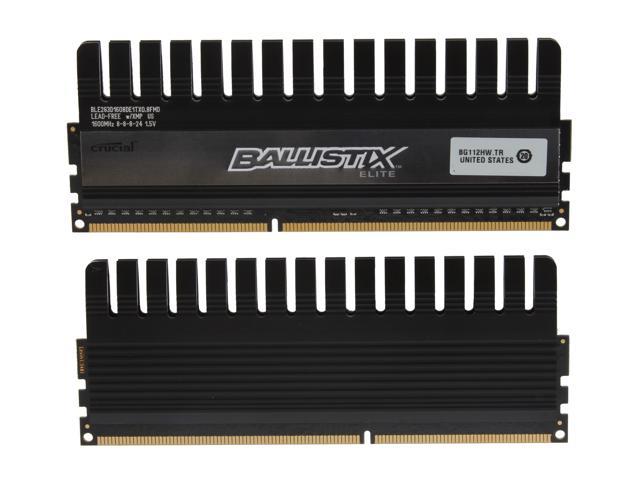 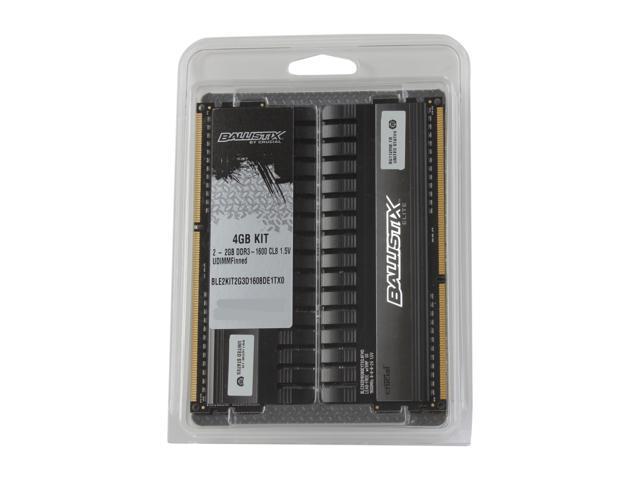 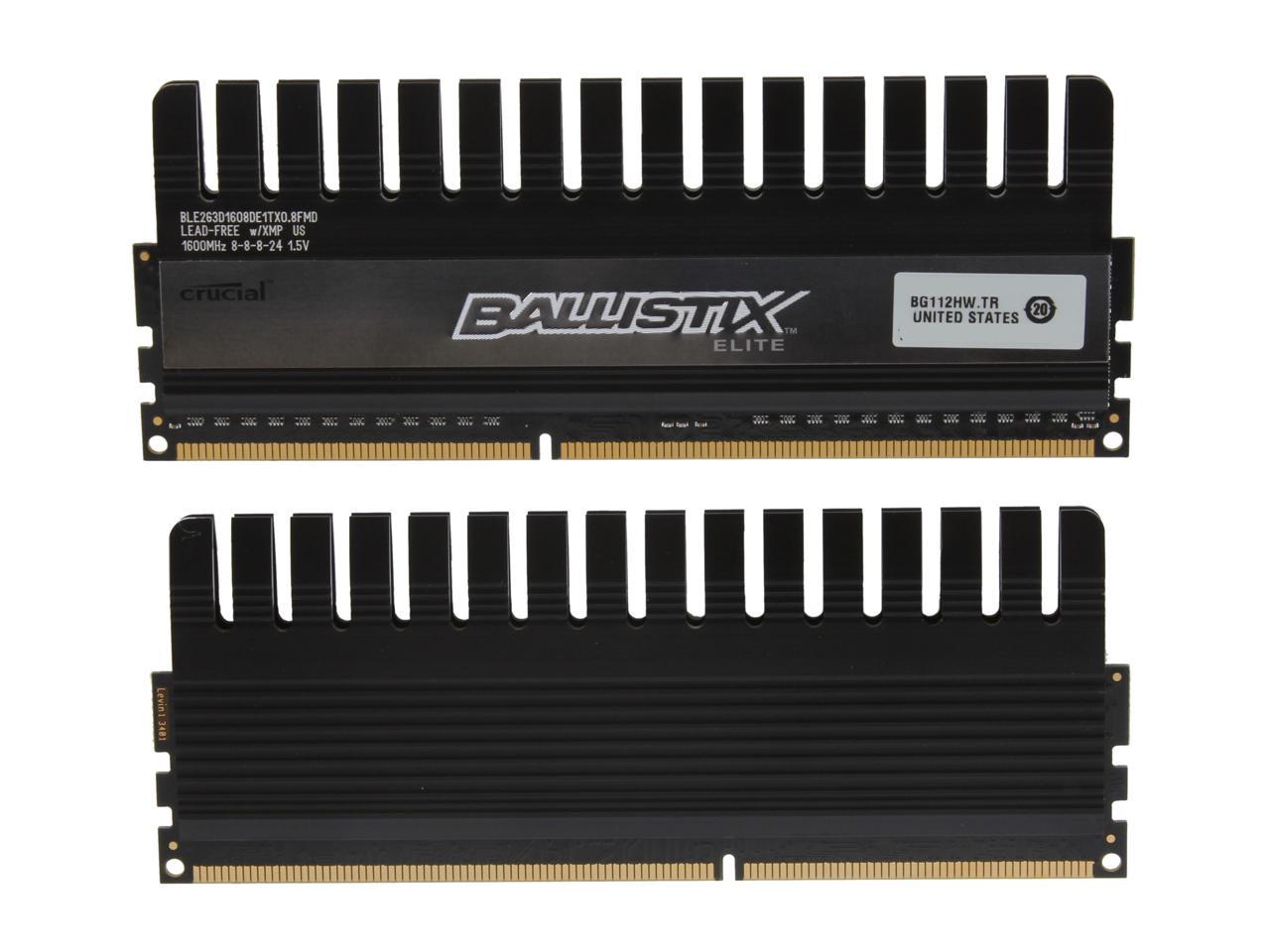 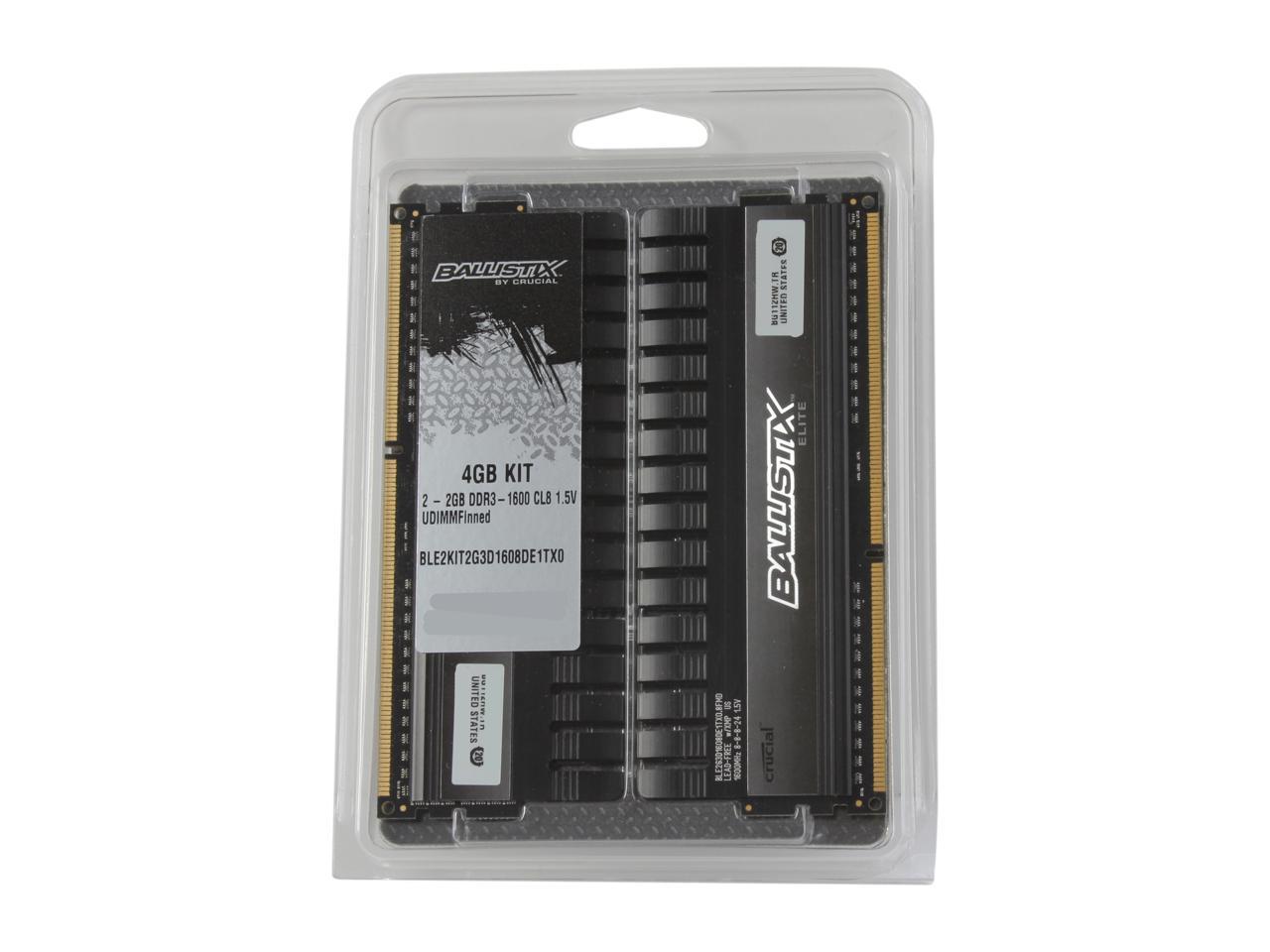 (7) Write a Review
OUT OF STOCK.
Overview
Specs
Reviews
Designed for performance enthusiasts, gamers and power users, the Crucial Ballistix Tactical series provides increased speeds and lower latencies. With style in the forefront, this series features a black PCB and an integrated heat spreader for improved thermal design. Additionally, the new Ballistix Tactical series provides users with reliable memory in a variety of speeds and densities that are ideal for system stability and compatibility while ramping up performance.

Learn more about the Crucial BLE2KIT2G3D1608DE1TX0

Pros: Ordered from best attributes to lesser. Note: (I bought two kits of this memory) Temperatures -- The big heavy heatsink on these allows them to stay cool much better than most kits I've used, as such I imagine they could handle pretty high voltages without incident. I upgraded from an eco kit that had been over volted for too long (my mobo doesn't go below 1.5v) and these make them look like kids meal toys when comparing their weights. Fast speeds -- I was able to get these kits to 1950mhz with loose timings (10cas) and only 1.6v (although I don't like overvolting ram). Also they operated at 8-7-7-17 with factory clocks (however, they wouldn't go beyond that using the same timings). I haven't fully dialed these in, but I'm running at 1800 mhz with 1.52v with i believe 9 cas latency. I could get away with more, but I haven't had time to run stress software yet. Appearance & feel -- These sticks scream quality build especially when being handled, due to the weight or overclocked.

Cons: Upgrading from my old kit it was looking RMA at first, my bios wasn't very good at auto-setting these up. I'm not sure if this was required, but in the end I had to add one stick at a time, loosening timings until they were all operating together. I'm pretty sure that these run at better timings at 1600 than 1333 and that conflicted with my "safe" settings. So word to the wise: set your timings, mhz, and volt to what the package says with 1 stick in, and then add the others. There were no actual cons beyond setup, and this is more of a mobo problem.

Overall Review: I'm very satisfied with these two kits that I bought, also I was able to get a 2+ bulk deal which made the price extremely competitive with even lesser kits. Notable info: ASUS Striker II Extreme motherboard (nforce 790i) & Intel Core 2 duo e8400+ 45nm

Cons: ugly as all hell I hope that heat spreader is doing something other than being an eyesore also the heat spreader is very large it fit fine with whatever heatsink came with my fx 6300 but I don't know about other large aftermarket heatsinks

Overall Review: bought it due to being on sale

Cons: Only 4GB, but enough for my Windows 7 machine

Overall Review: Would recommend to others

Pros: It worked, didn't eat a whole in the wallet.

Overall Review: Used in a budget PC, so far so good. Does what RAM is supposed to do. It isn't pretty or the fastest stuff on the market but fits it's intended purpose.

Pros: only model and type of ram i can overclock my core 2 duo e8500 with and set the base ram frequency at 1333mhz which in terms runs at 1532 mhz with my oC profile on my asus P5G41T MLX board set at 15%. Wow core2 duos are still wickedly fast even in todays standards if you pair them right

Cons: none crucial is the bomb

Overall Review: works , does the job and then some , i highly recommend

Overall Review: This is my first time purchasing from Crucial and the rams worked fine for the first few weeks. Now my computer is crashing with blue screens.

Manufacturer Response:
Hello, Thank you for your feedback. We're sorry to hear our memory may be causing issues. Blue screens can be tricky to troubleshoot so please contact our support at 1-800-336-8915. We can help determine if this is a memory issue. Our support team will assist you as best as possible and if needed gladly RMA and exchange product. Regards, Crucial