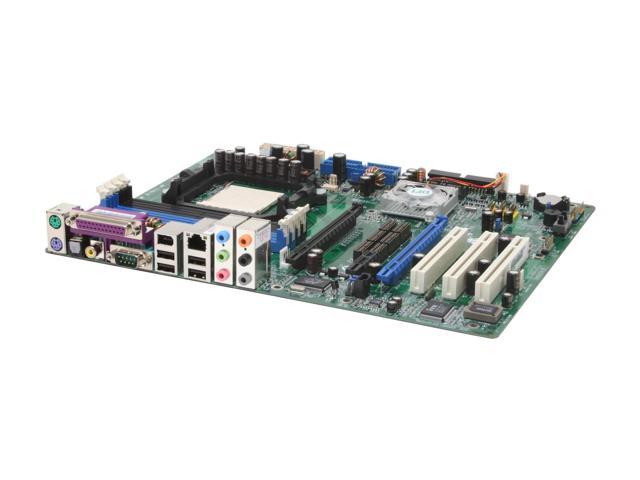 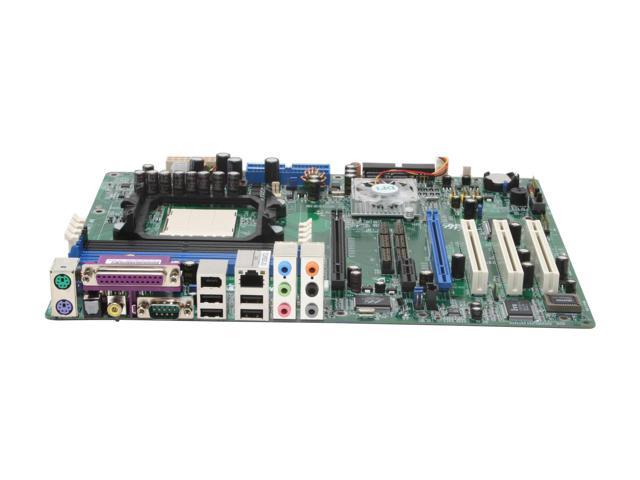 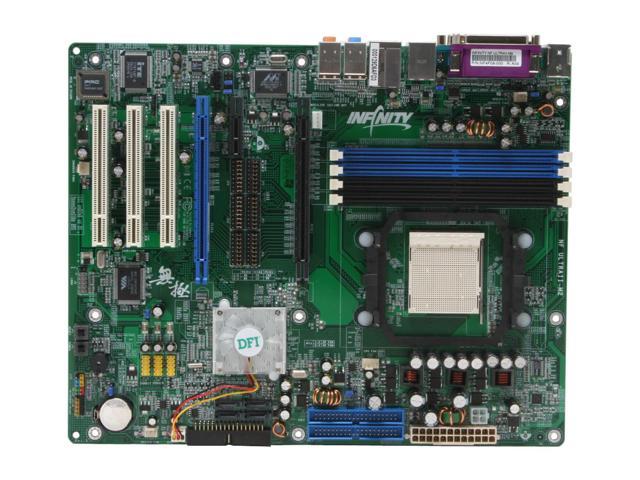 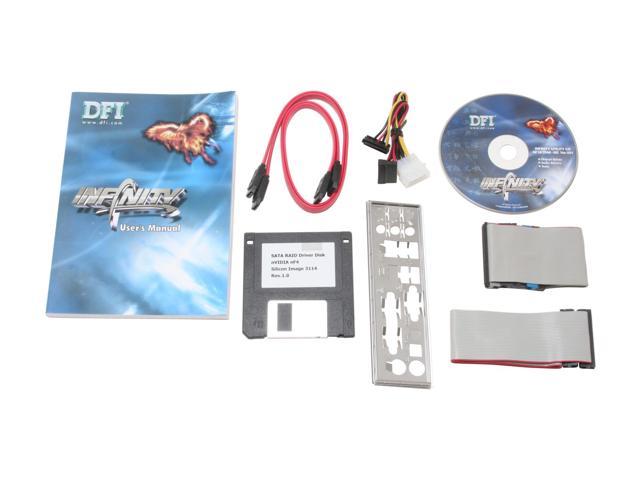 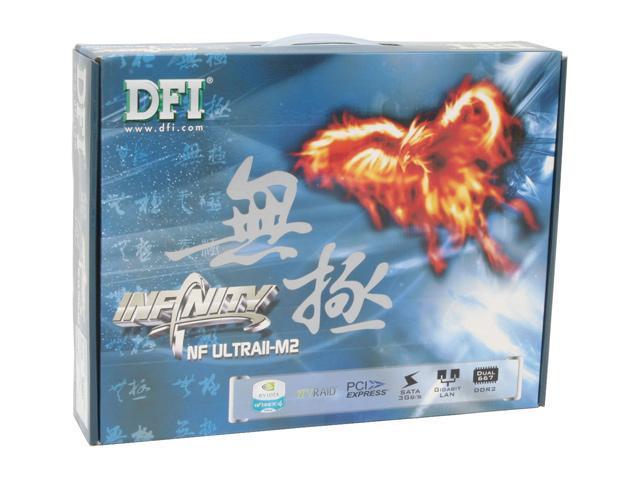 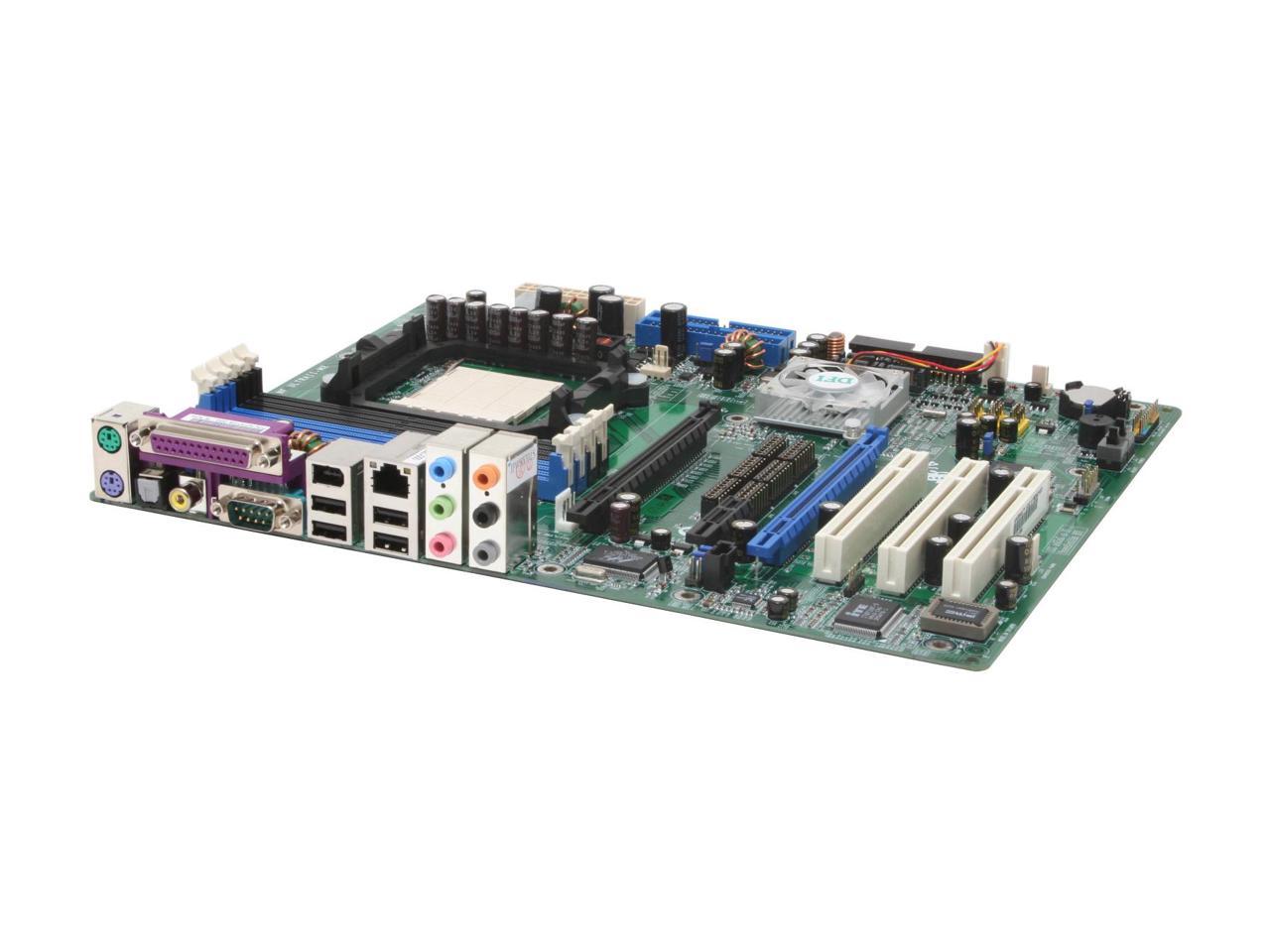 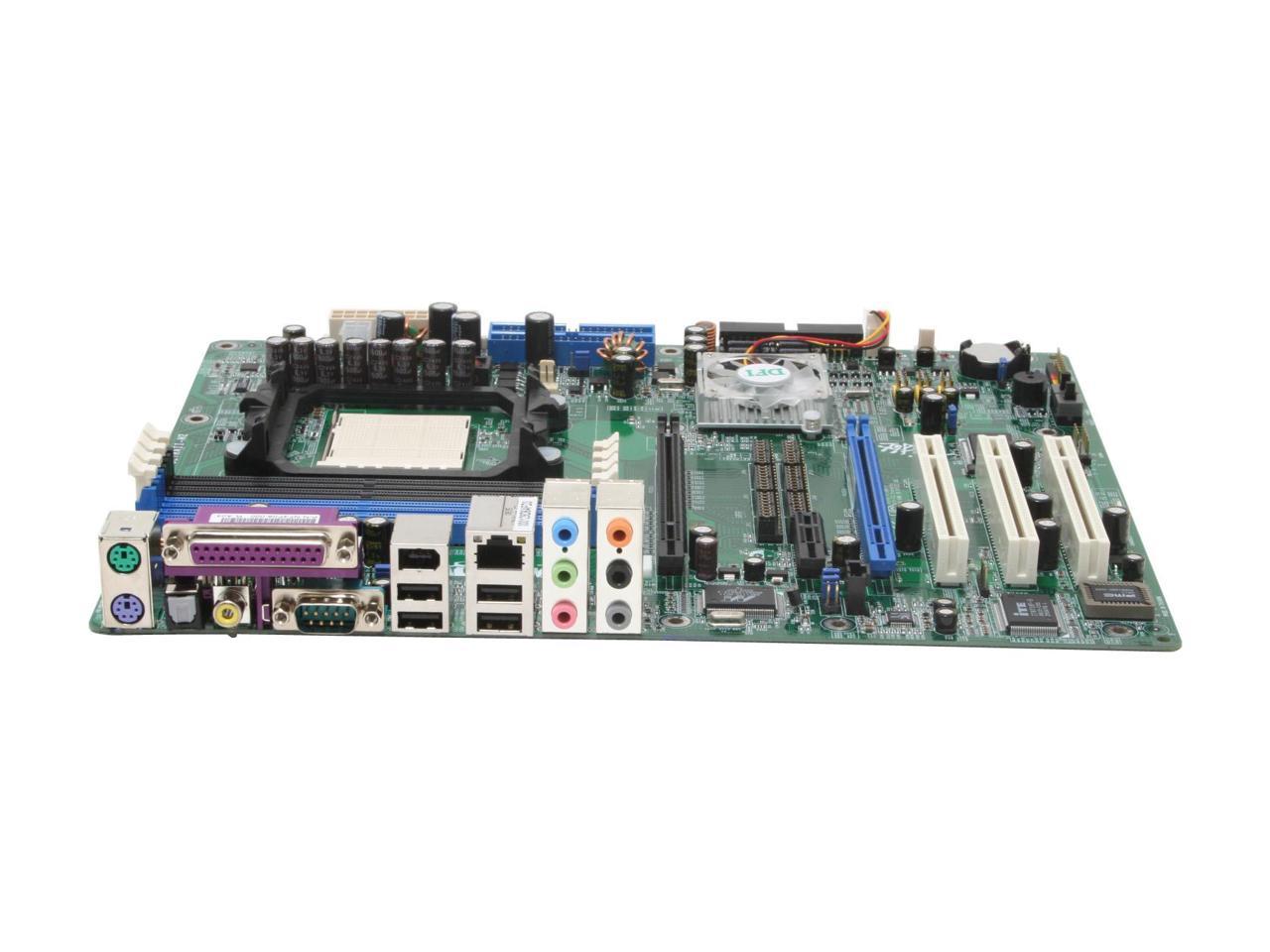 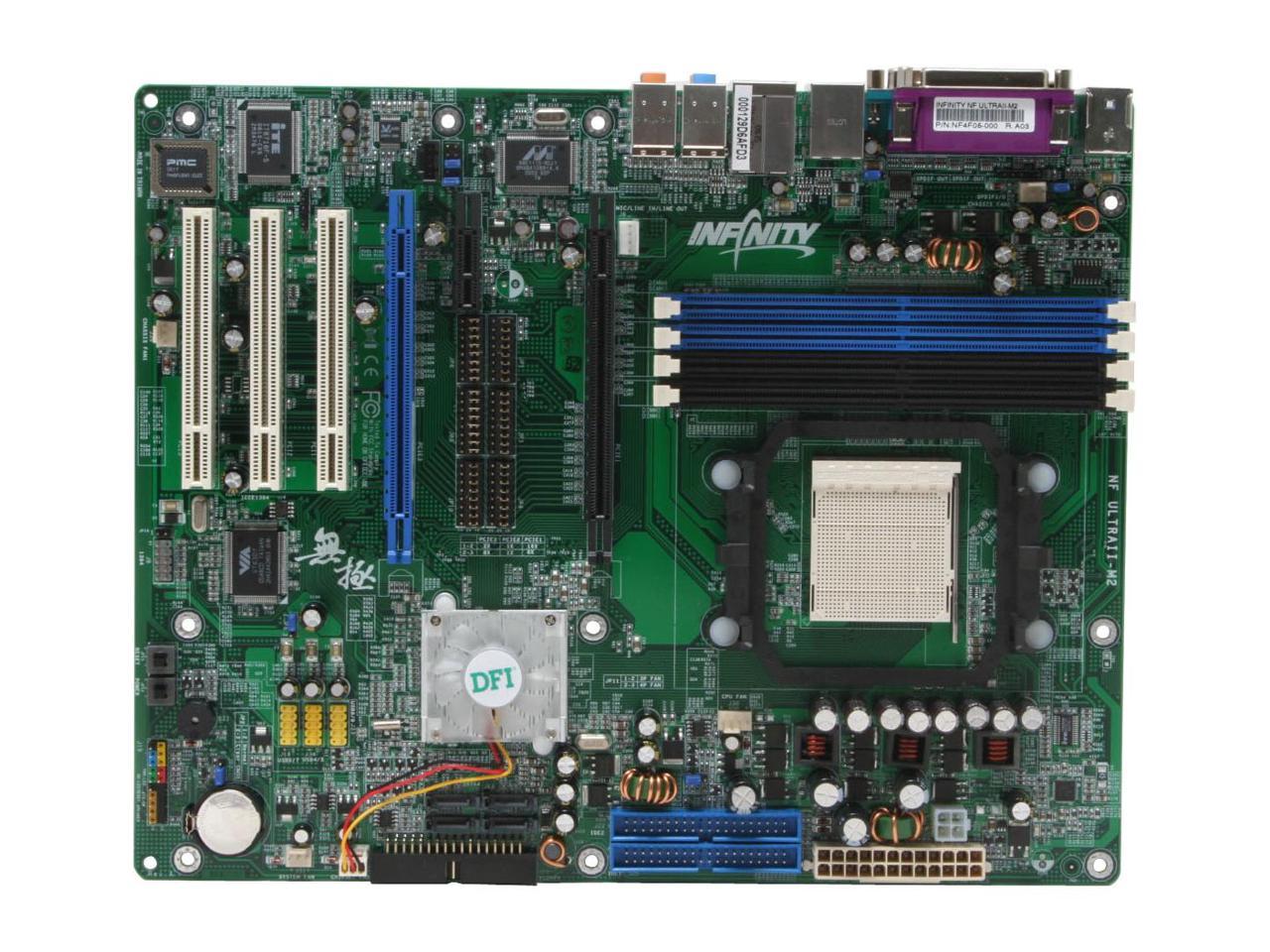 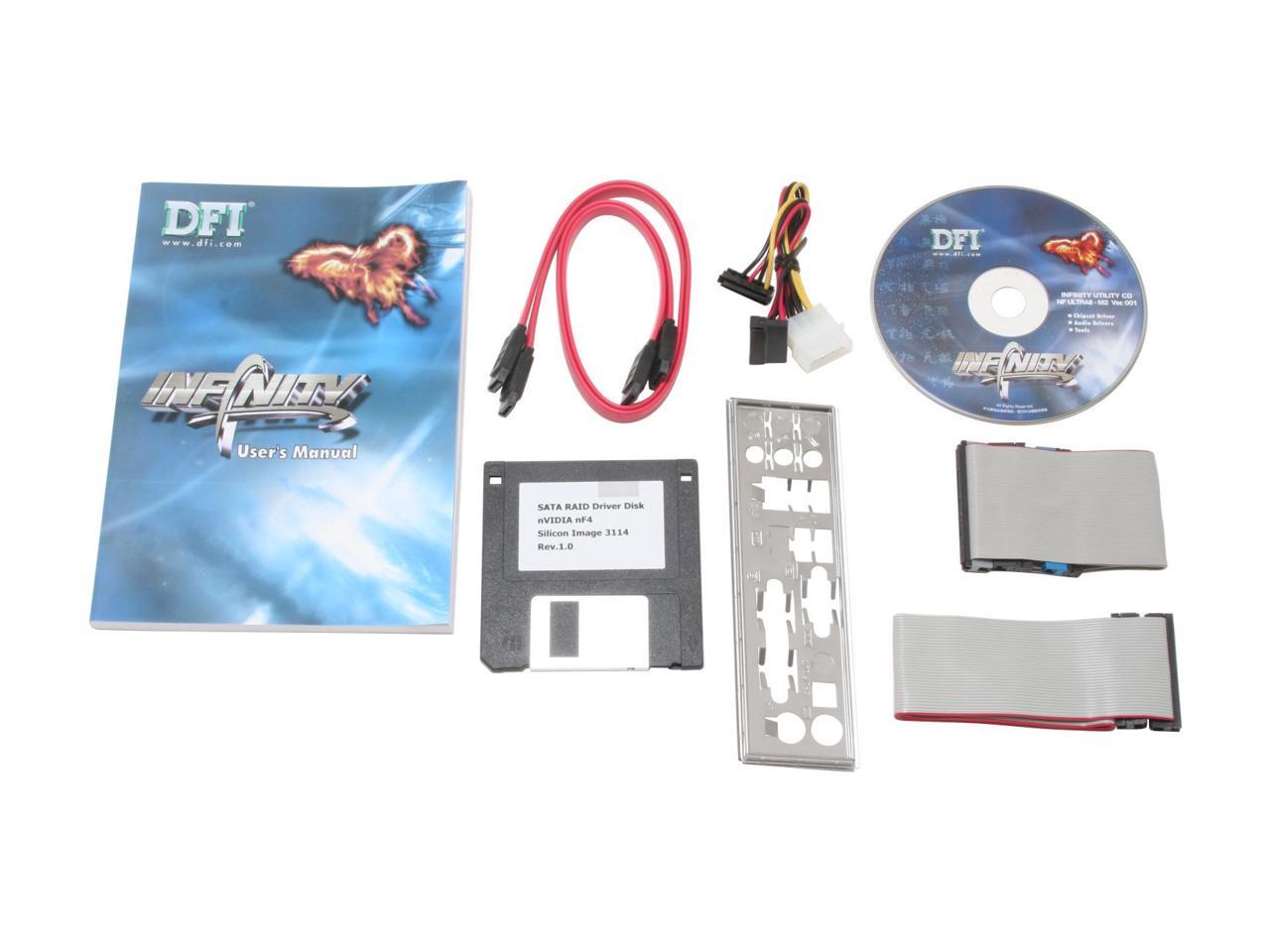 (92) Write a Review
OUT OF STOCK.
Overview
Specs
Reviews
the DFI Infinity NF UltraII-M2 is a full featured motherboard with plenty of "oomph", great for anyone needing to upgrade or replace their system. Equipped with an AMD socket AM2, suitable for Athlon 64 processors, including the X2 and FX series, it can manage anything you have room for! Using the Nvidia nForce 4 Ultra chipset, it can hold up to 4GB of DDR2 memory to give you powerful support for memory intensive applications. It also includes a gigabit Ethernet port, 7.1 channel onboard sound, and 4 SATA ports.
You can use these ports for a variety of storage solutions, because this great board supports RAID 0, 1, 0+1, and JBOD. The Infinity NF UltraII-M2 has multiple expansion slots to use including two x16, and one x1 PCIe slots, plus an additional three PCI slots. Go ahead: build the system you want, you're getting a great, solid foundation.

Overall Review: Thanks to the other reviewers, I knew to call DFI (510-274-8000 Ext.117) and have them send me the current BIOS on a chip. Newegg was clueless as to how to exchange for a more recently manufactured board and just wanted to RMA the whole MB/CPU combo. Hard to believe they "have no way to contact" the warehouse. More likely just lazy...

Pros: Great features on this board. Excellant customer service at DFI. No hold time on the phone and immediate solution. I haven't actually been able to post the board yet, so I will leave it for now.

Cons: Purchased the combo with Athlon 64X2 4000+. The problem was that the proc in the combo is a 65nm and the only way the board will recognize it is with the 02/07 bios update. Good luck flashing the bios when the board won't boot. Called DFI and they are sending me a new bios chip free of charge(this should be in the "pros" section).

Overall Review: I am still thinking I will have a solid board. I just wonder if some of the "DOA" reviews are not due to this problem. Beware and research before buying a combo deal because these are not tested to play nice together. Newegg rocks though and I will buy here again and again.

Pros: Fast board, even with Vista. It has enough USB for my needs, plus the header pins on the board for many more. I like the firewire port being available in the rear without the need to identify header pins on the board, even though you can do that too. DFI was very friendly on the phone and they quickly sent me the updated bios chip for free! The board seems pretty solid running Windows Vista 64-bit and my initial tests with Gentoo Linux also look promising.

Cons: It could use more SATA ports. I had to replace the bios chip before it would post with my AMD processor but it wasn't too hard to replace and DFI was really helpful (see Pros). The raid works but is more of a bios-software raid due to the NVidia chip. I had to download the drivers for Windows Vista 64-bit before I could install onto the raid. I put them on a flash drive and the install went smoothly. There will be some work to get Gentoo Linux on the raid as well. One more thing, I was confused about the + and - pins for the hard drive and power LEDs. They could have been better documented. All in all, I like this board but if I were a beginner then things would have been a little more difficult to get working.

Overall Review: I thought I would have the same "No Post" error that other's were having, so I called DFI the day I ordered this and they sent me an updated bios chip. This is the second DFI board I've had and I'm pleased with the performance and stability of the DFI products which I use.

Cons: The chipset does stay pretty warm (55-58C), but I have not yet encountered any instability or lock ups.

Overall Review: I waited to upgrade to AM2 until something like this came to the market, and I'm glad I did. This board has all the overclocking features you could ever want or need. Now if only they could make a MicroATX version....Can be hard or soft modded to SLI.

Pros: See my previous reviews. I received the updated bios chip from DFI after 1.5 weeks. Turns out they didn't mail it when they said they would. But, it works like a charm now. I would suggest that the reviewer below got a mobo with an updated chip already installed so hopefully Newegg has resolved the issue.

Cons: None, other than DFI not shipping the bios chip on time.

Pros: It posted without any trouble on my first try. Says it supports SLi. No problems installing cords or fans.

Cons: None so far, had trouble with SATA/RAID, but turned out to be one of the drives.

Pros: This board overclocks well, good laied out. For the money this board cant be beat! Instalation was a seamless. No bios updates needed, this is a plus these days. 3dmark06 scored over 5k with a x1950 pro! Could not be happier. This is my first DFI board and I will get another when it is upgrade time!

Cons: 2 PCIe x16 slots no SLI????? Sound plugs are wrong . You have to use Green and Grey, not Green and Black like it says. A better chipset HSF would be nice, but runs stable even while over clocked. Again NO SLI!!!!!

Overall Review: As normal ordered, 3 days later I got it!!! Keep up the good work!

Pros: Great AM2 board for the price. Easy install, all the hook ups are in perfect places.

Cons: Chipset gets hot, about 50c. The heatsink and fan on board is little loud, but is easy to replace.