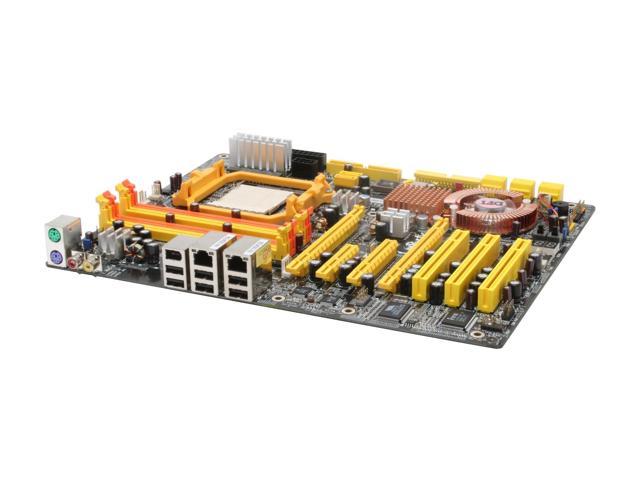 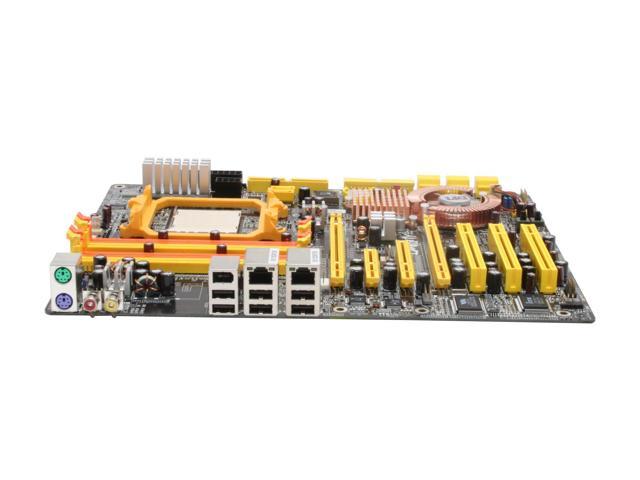 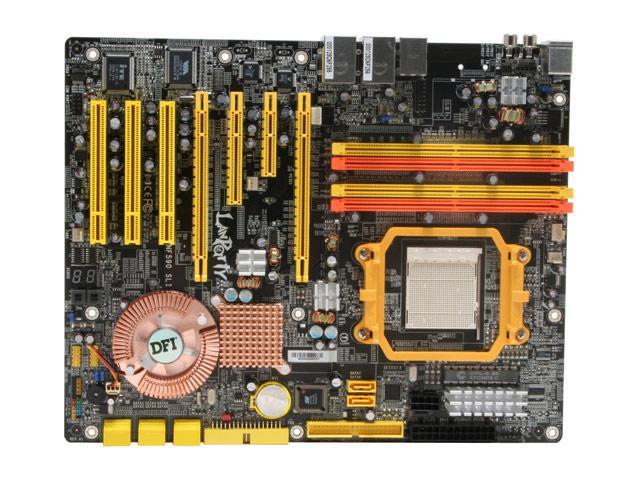 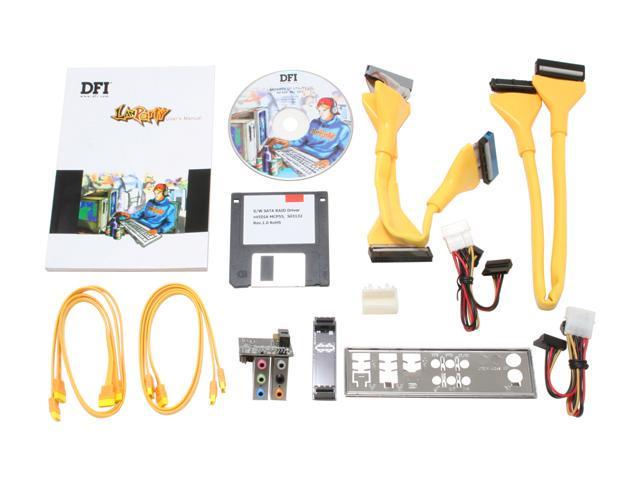 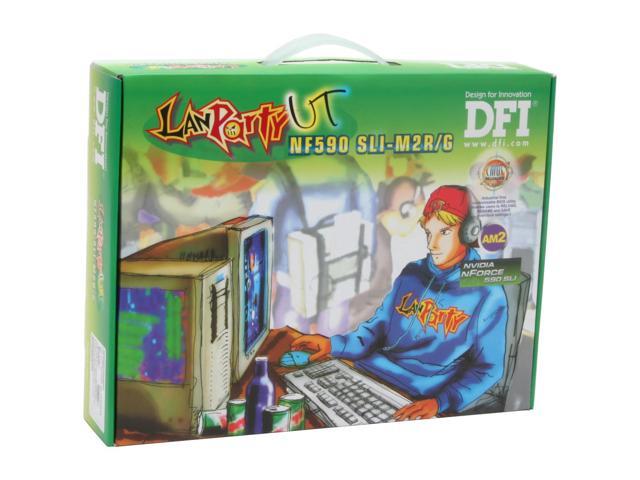 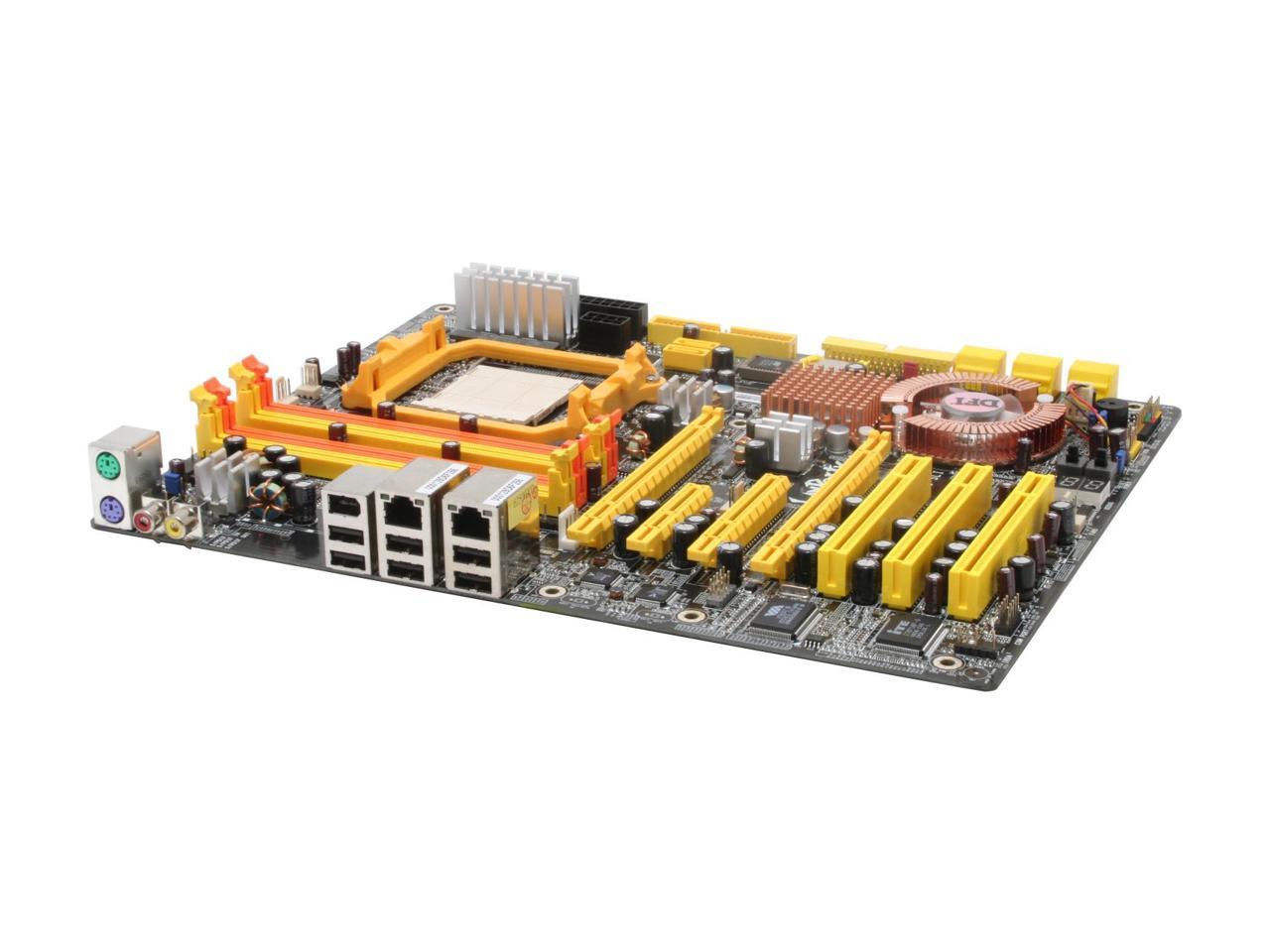 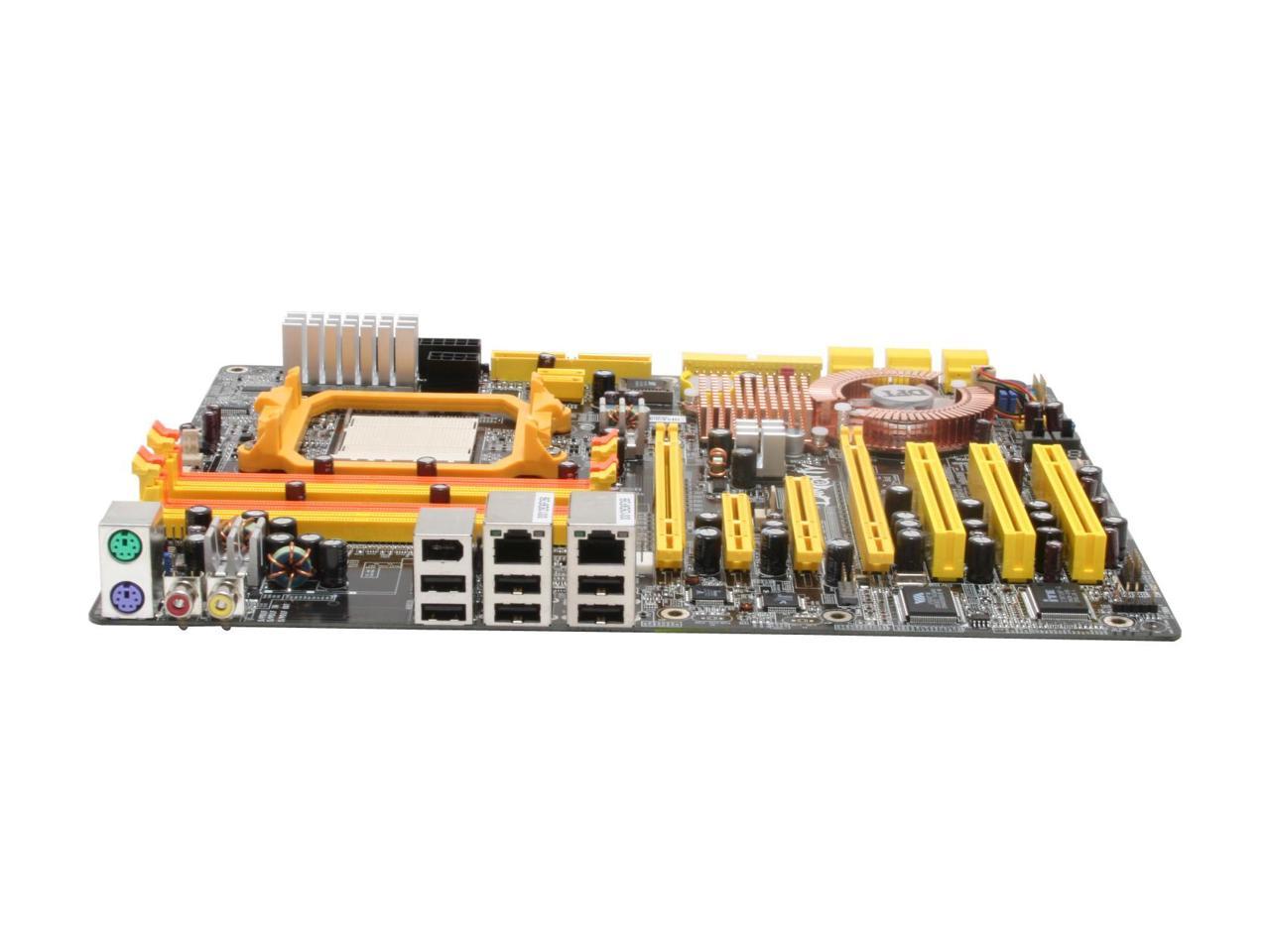 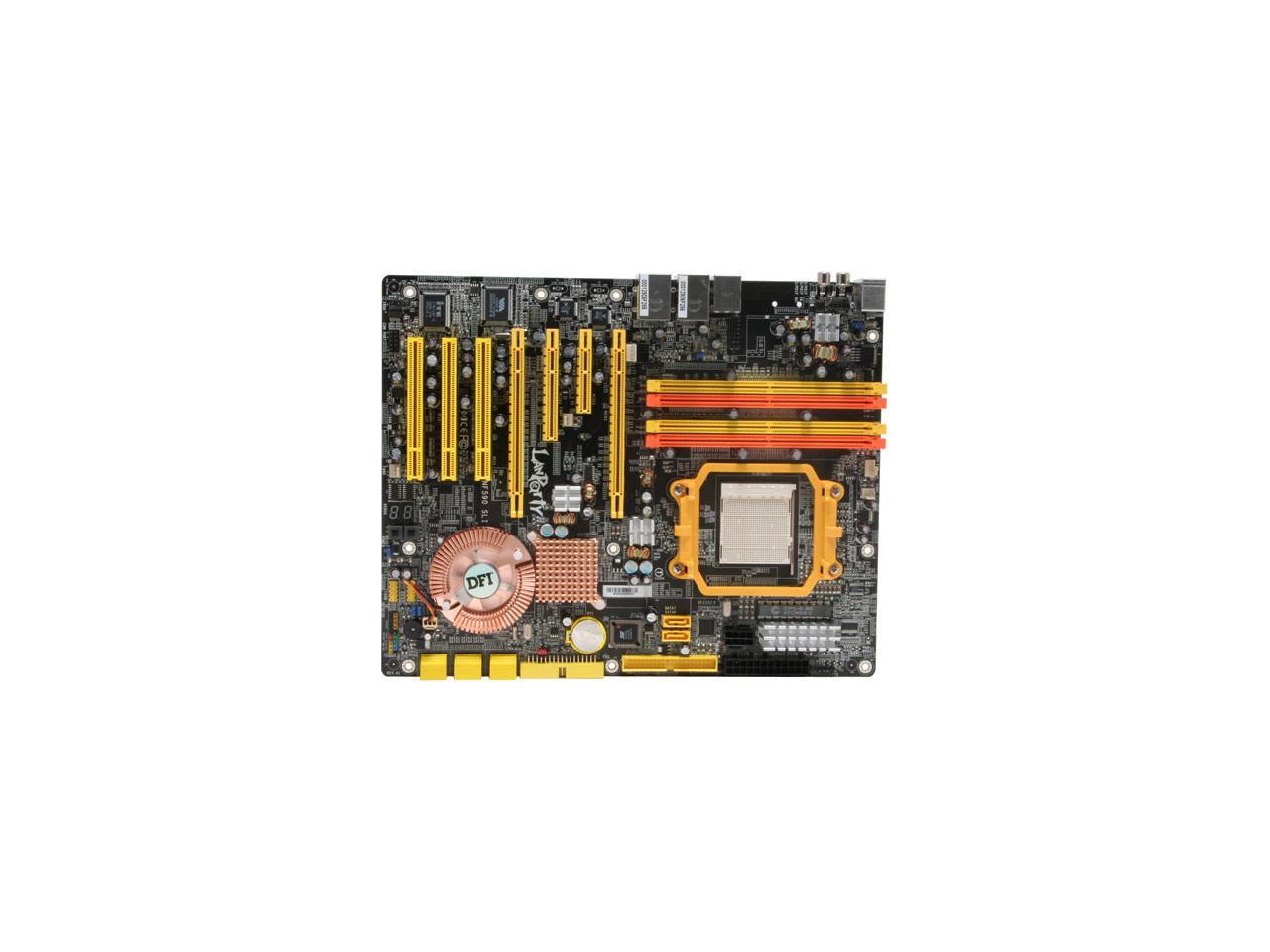 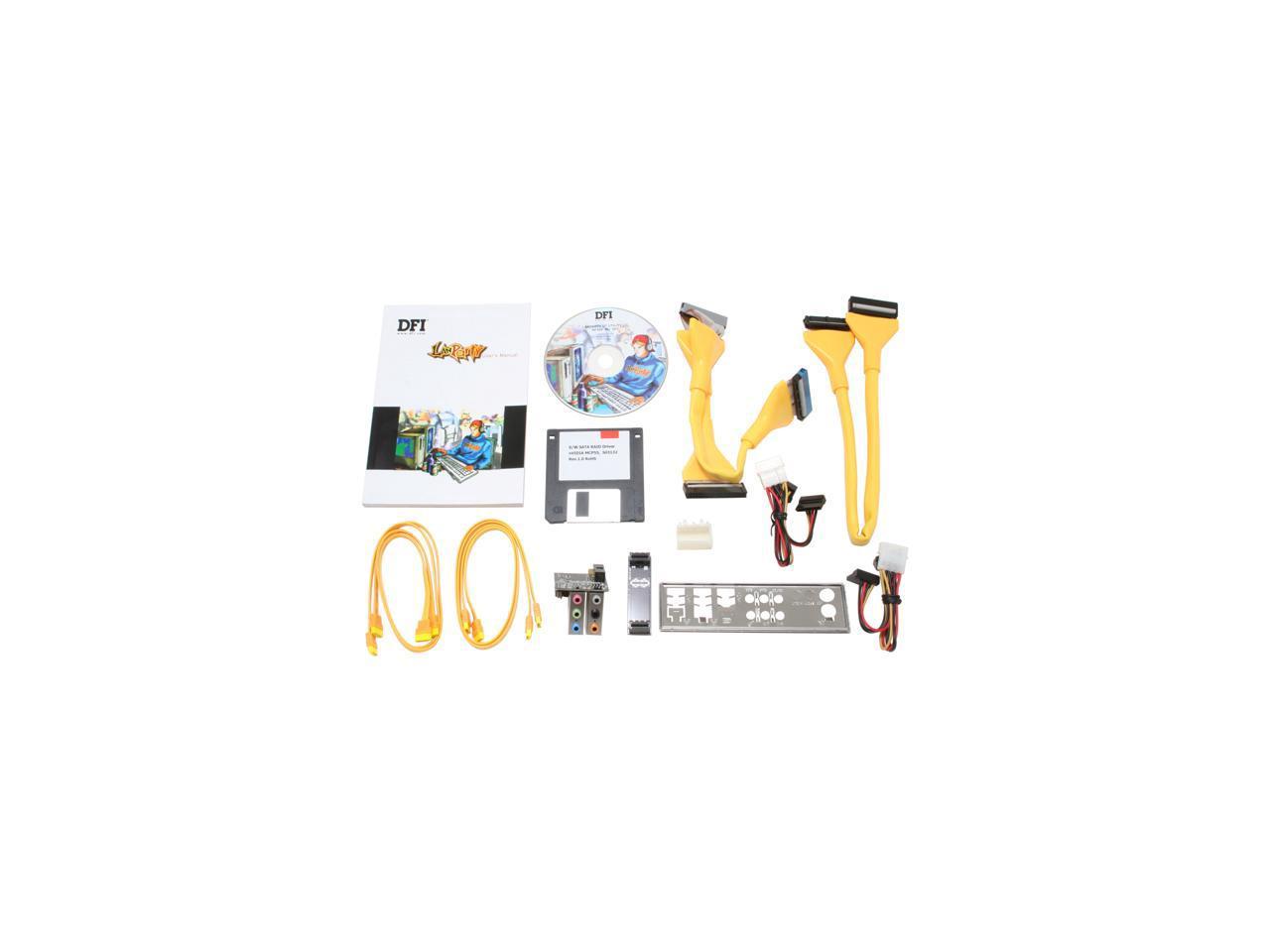 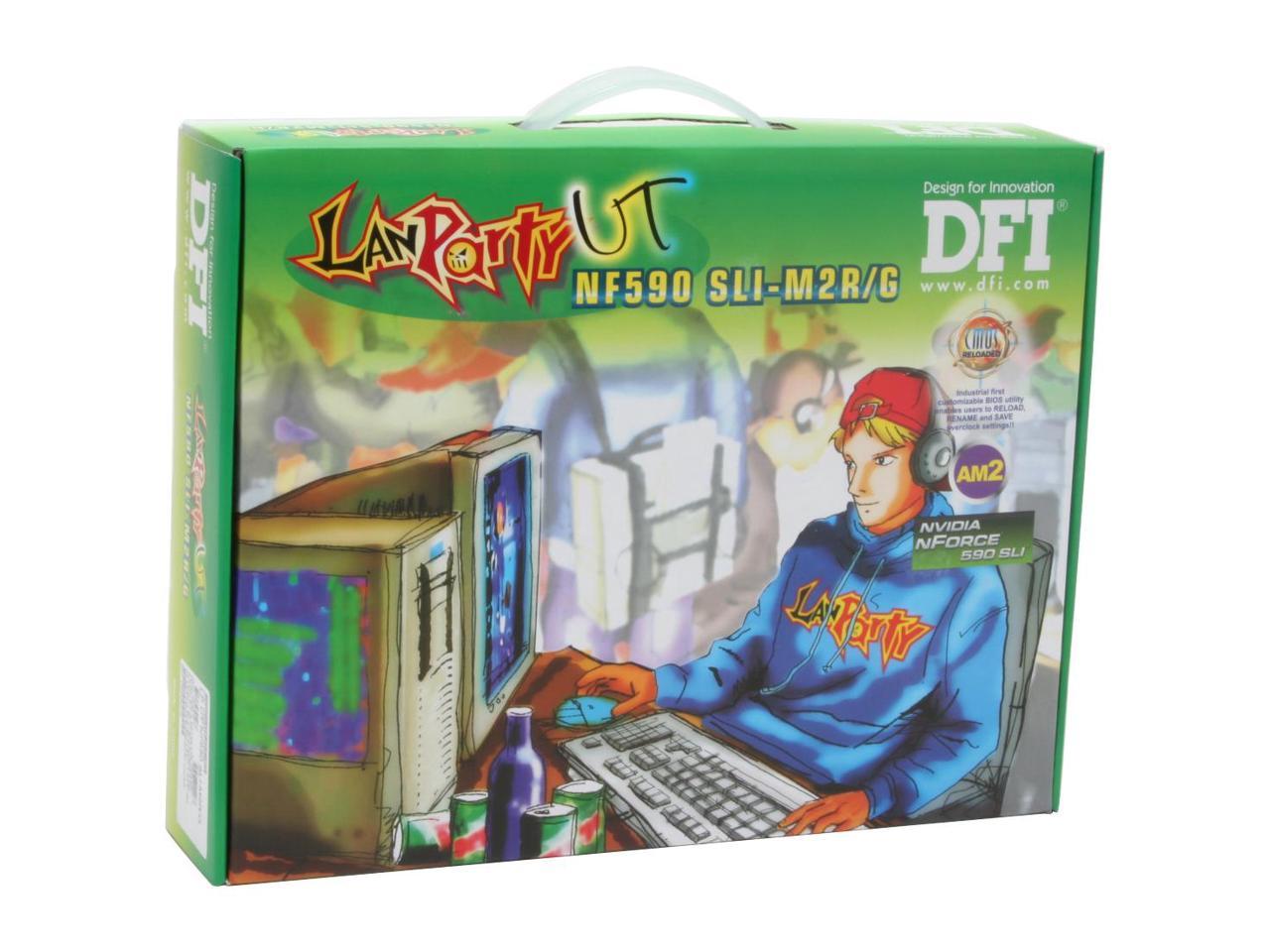 (110) Write a Review
OUT OF STOCK.
Overview
Specs
Reviews
An upscale full featured motherboard with plenty of power, the DFI Lanparty UT NF590 SLI-M2R is designed specifically with the gamer in mind. Equipped with an AMD socket AM2 suitable for Athlon 64 processors, including the X2 and FX series, the DFI Lanparty is more than capable of handling anything you may want to run. Using the Nvidia nForce 590 chipset the DFI Lanparty supports SLI which gives you the ability to use 2 graphics cards together for even more processing power. It also includes dual gigabit Ethernet ports, 7.1 channel onboard sound, and 8 SATA ports.
Thanks to those 8 ports, by adding multiple hard drives to the system the DFI Lanparty supports RAID 0, 1, 0+1, 5, and JBOD. For your expansion needs the DFI Lanparty has multiple expansion slots to use, including two x16 , one x4, and one x8 PCIe slots, plus an additional three PCI slots. For any gamer that wants to build a powerful system, the DFI Lanparty UT NF590 SLI-M2R is a great foundation.

Cons: Not a con for me but it does only have 1 IDE. However, one should consider the fact that both hard and optical ATA drives are going to be no more. This board is good if you have sata hard drives and ata optical drives.

Overall Review: I refuse to use any other company's board other than DFI. You can't beat them.

Cons: Very picky with memory settings. You must manually set the memory timings/volts to get it to work. Stock bios has alot of bugs. After os install update is needed.

Overall Review: YOU HAVE TO MANUALLY SET THE MEMORY FOR THE BOARD TO WORK!. Just give it time and do some reaserch on Diy-street and talk to them they will help.

Pros: Quality construction, nice layout, memory available made just for this board. Both PCIe slots are a full 16x. Chipset fan is now a nice size all copper heatsink with high speed fan. Basically a clone of the evercool gpu cooler that DFI owners would use instead of the cheap old DFI cooler. Quality components all around.

Cons: No support from DFI for this board. Official bios is bugged and beta bios is bugged. Both are incomplete and missing features. 2 bugged lame bios versions for this board, that's it and no word on a new proper bios. Official bios is from last July, as are the chipset drivers. No driver updates since release. OCZ made memory just for this board, but the bios doesn't know what to do with it. New support forum is useless and the onboard audio has major EAX problems. Use a sound card. Overclocking is poor due to bios flaws. Random reboots, system shutdowns and stability is horrid at times. Temp and voltage values not reported accurately. Wait until a full working bios is out before wasting money on a great board with poor support that makes this a poor choice right now.

Pros: Everyone says there are lots of BIOS options. It's no joke. This means it certainly isn't for everybody, but great for those who know or are willing to spend time learning. Lots to work with and pretty cool to look at.

Cons: Stock fan is a bit too loud for my tastes. Aftermarket vga fans can be cooler and quieter.

Overall Review: Don't install Nvidia's Network Access Manager as it causes many problems with this board.

Pros: The board is awsome. I ordered mine on 4 Sep 06. I switched to AM2 at initial release. I traded from teh Crosshair to this board as I have used DFI for a long time. So far every stick of RAM I have used with it works with out a hitch. OCZ has released a special edition fo rDFI DDR2 with AM2.

Cons: My board died but I am not sur eif it was the power supply o rmother boards fault. It is bound to happen. I do not hold it against DFI. That was the only thing keeping me from giving the board a perfect 5.

Overall Review: Those who are haveing issues getting hardware working need to take time and understand the settings and nature of DFI boards. Most want a plug and forget setup which is not what DFI is building. DFI builds tweakers boards, so if you buy on ebe read to tweak.

Pros: Looks nice, well packaged bundle, NewEgg got it to me quickly.

Cons: Does not work well at all with certain components. In my case a AM2 4600+ X2,and G.Skill F2-6400PHU2-2GBHZ Memory. 10+ hours of trouble shooting got me nowhere. Refused to load windows giving constant stalls and memory erros. Memory tests fine and is the latest G.Skill version that is supposed to work on AM2 according to G.Skill Tech. All this is powered with a PCP&C 510 SLI. I have no use for a board that will not work with such high end components.

Overall Review: The AM2 platform in general from all motherboard manufacturers is far from trouble free. My suggestion is to wait a while until AMD/Nvidia/Motherboard Makes get it all figured out, because right now its more trouble than its worth.

Pros: easy to install everything, works great love the 2 pci express slots, really easy to use BIO and the manual explans everything

Cons: the audio doesnt work with my xp so i had to buy a sound card

Pros: just a GREAT mobo. Ran cool and was a pleasure to build on. I especially like the side mount Satas. DFI comes through again.

Cons: Its not Red