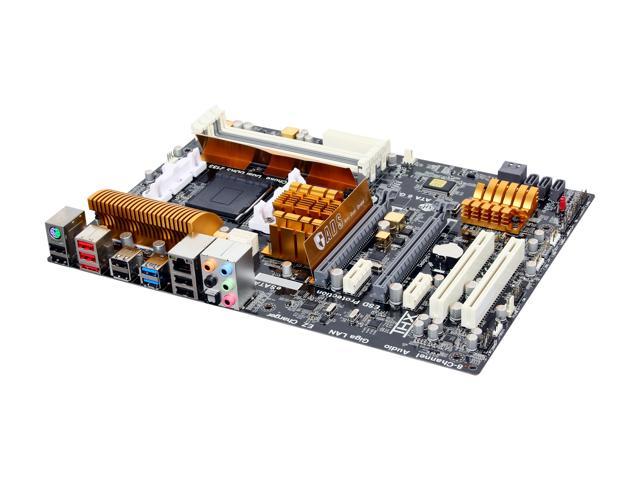 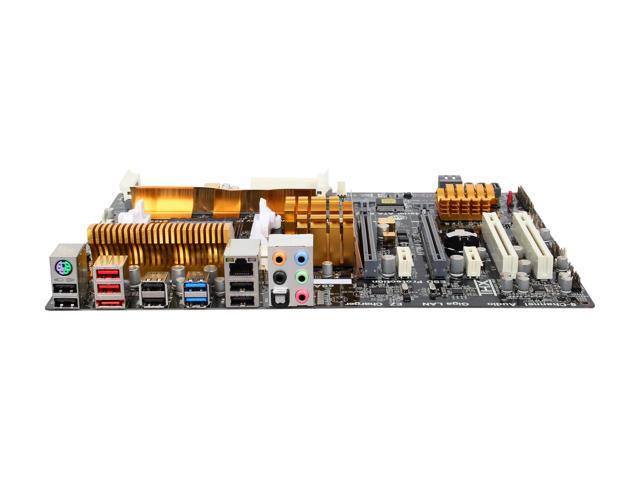 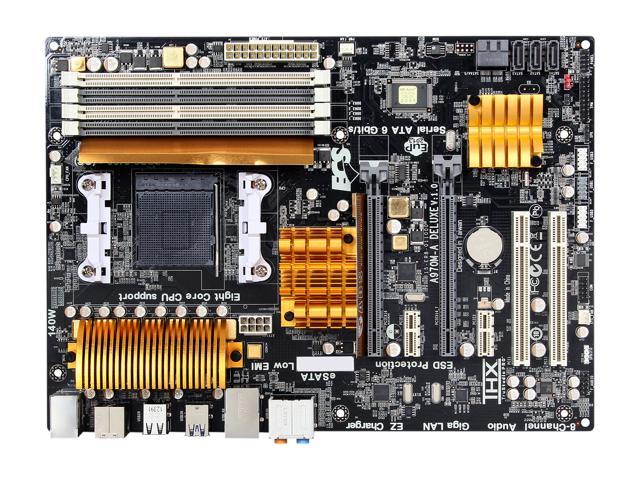 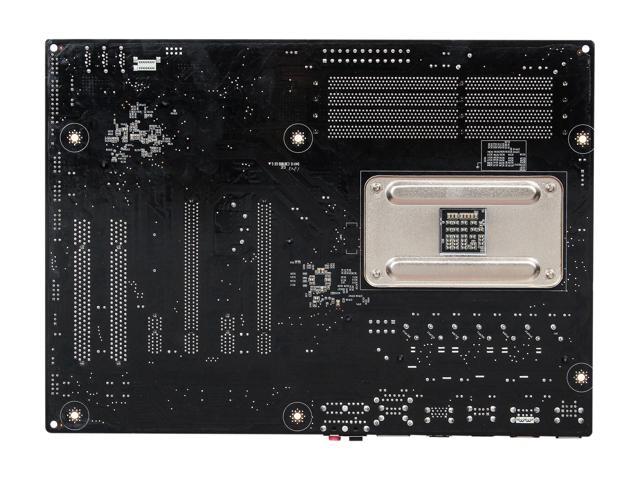 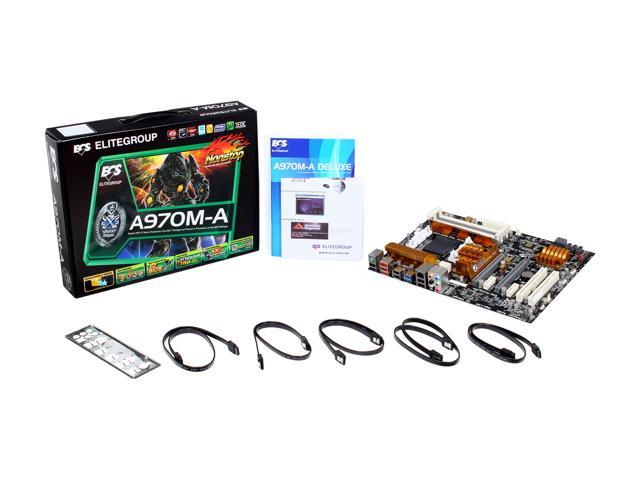 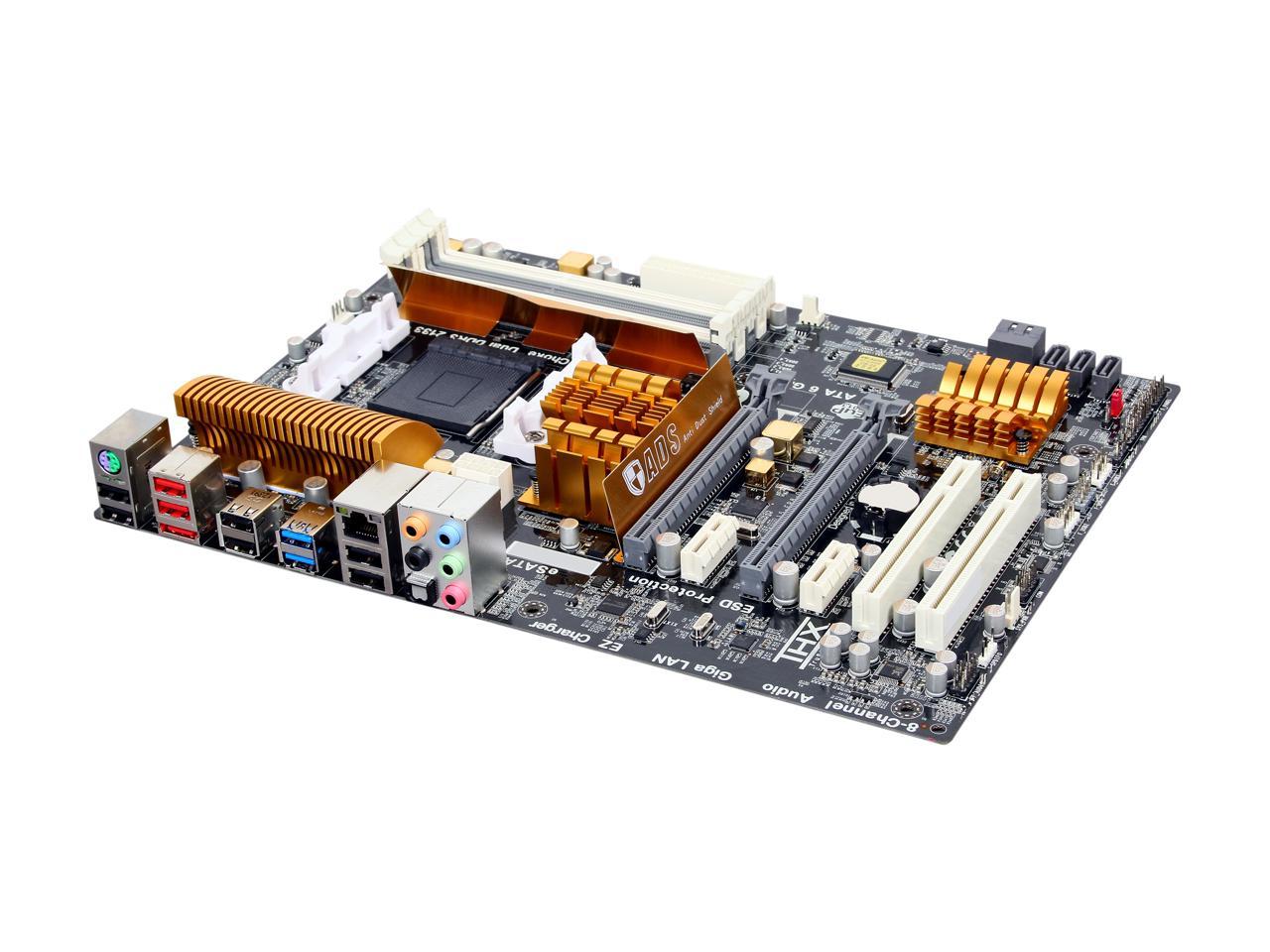 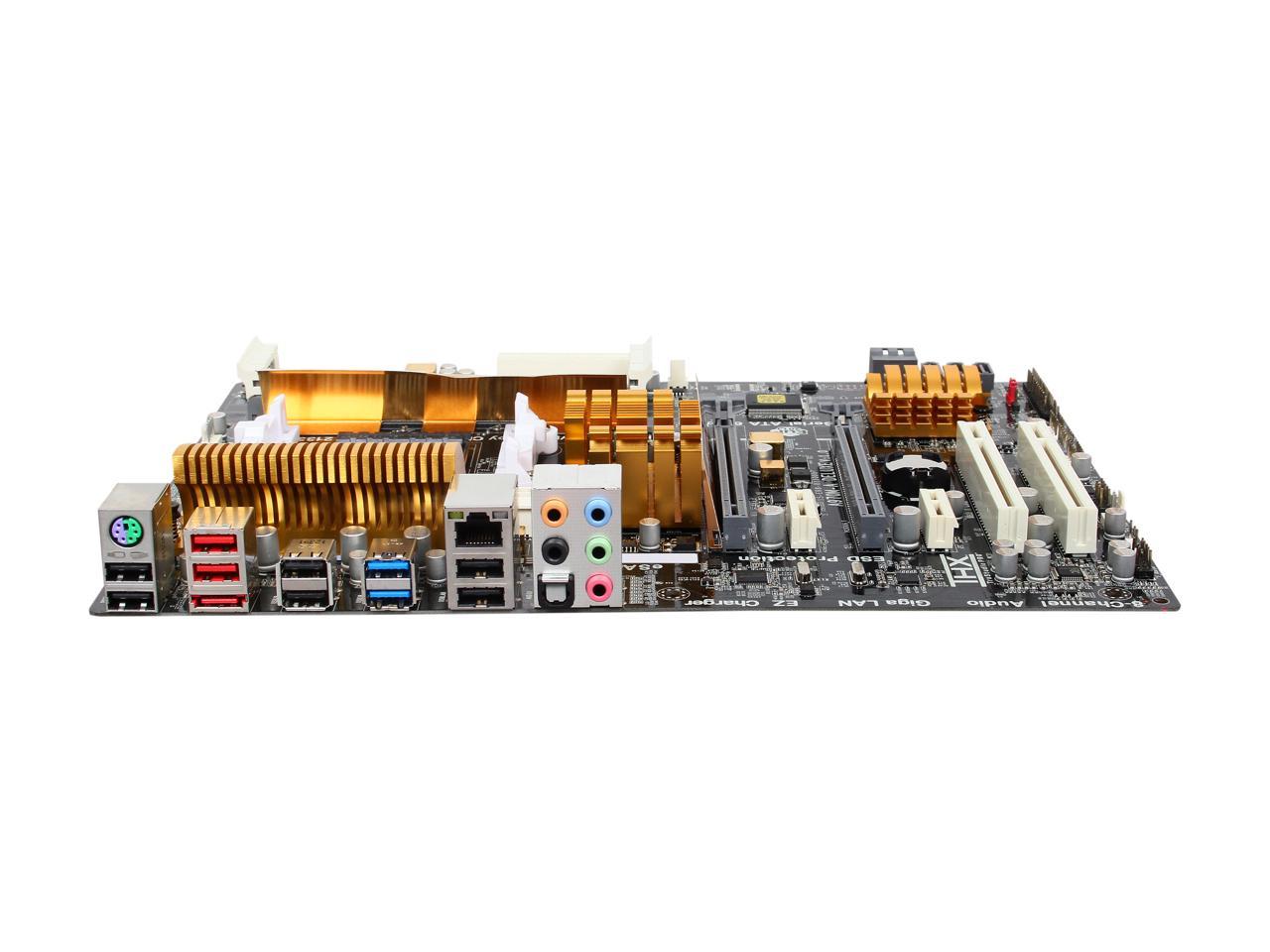 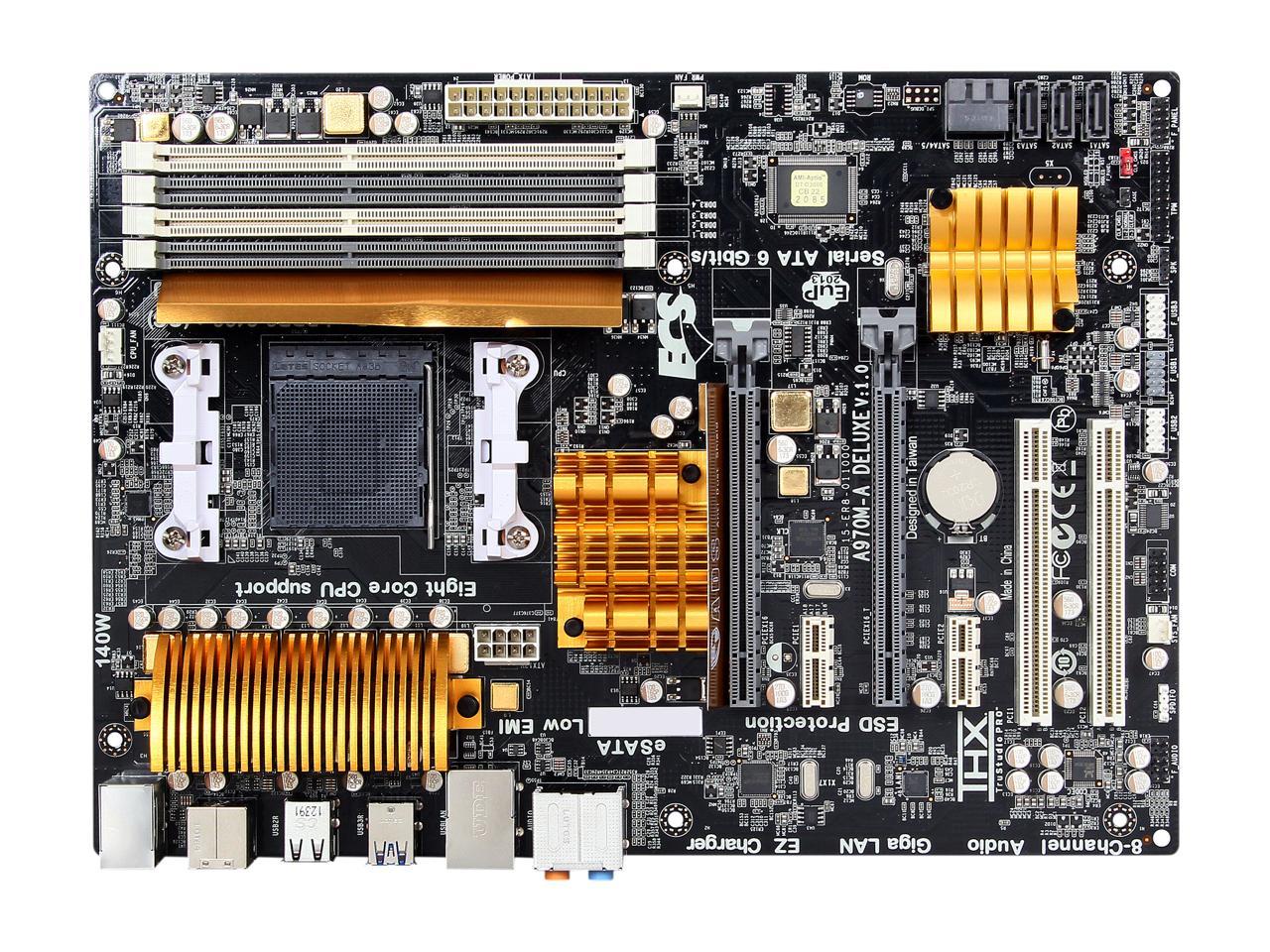 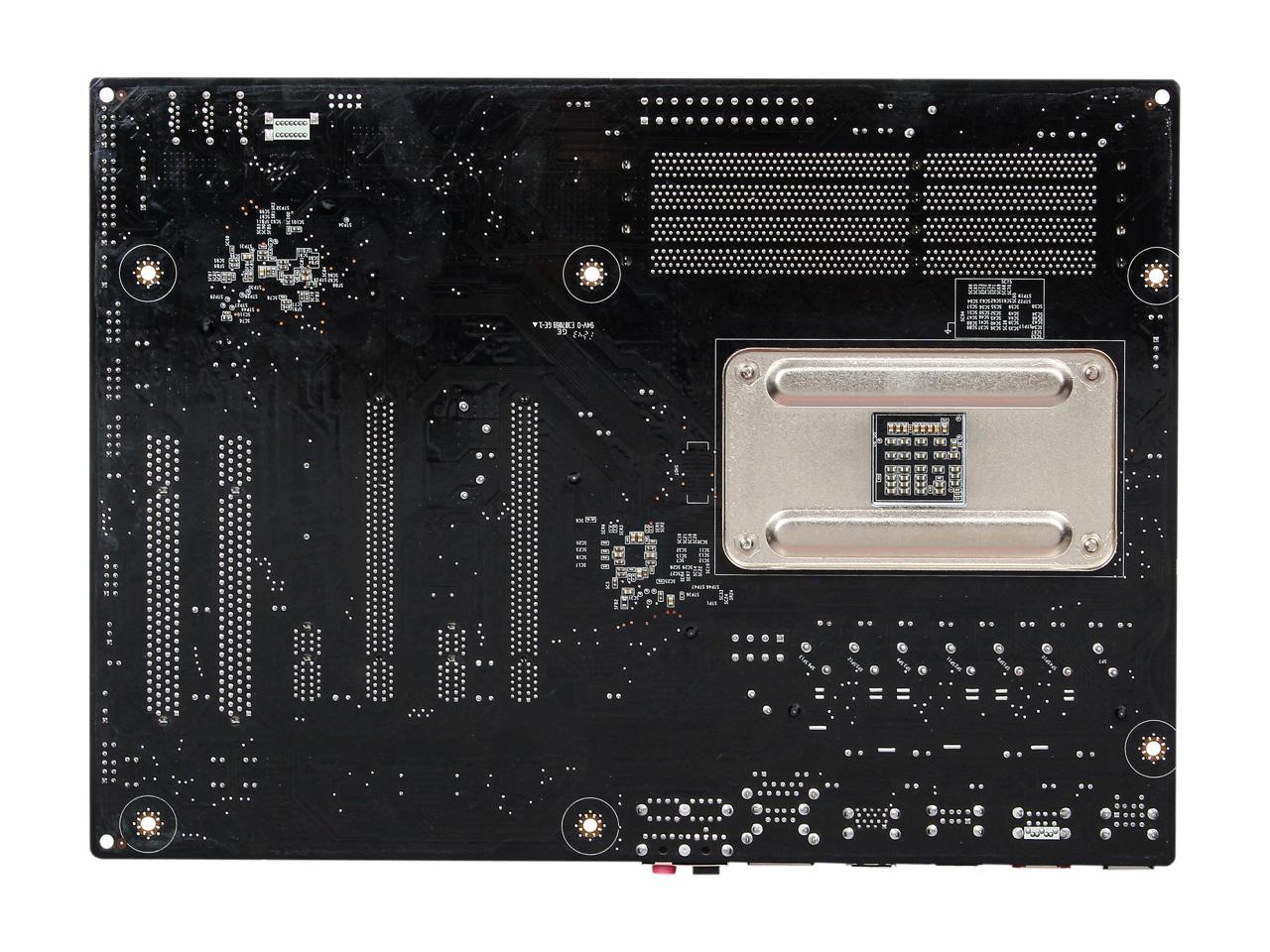 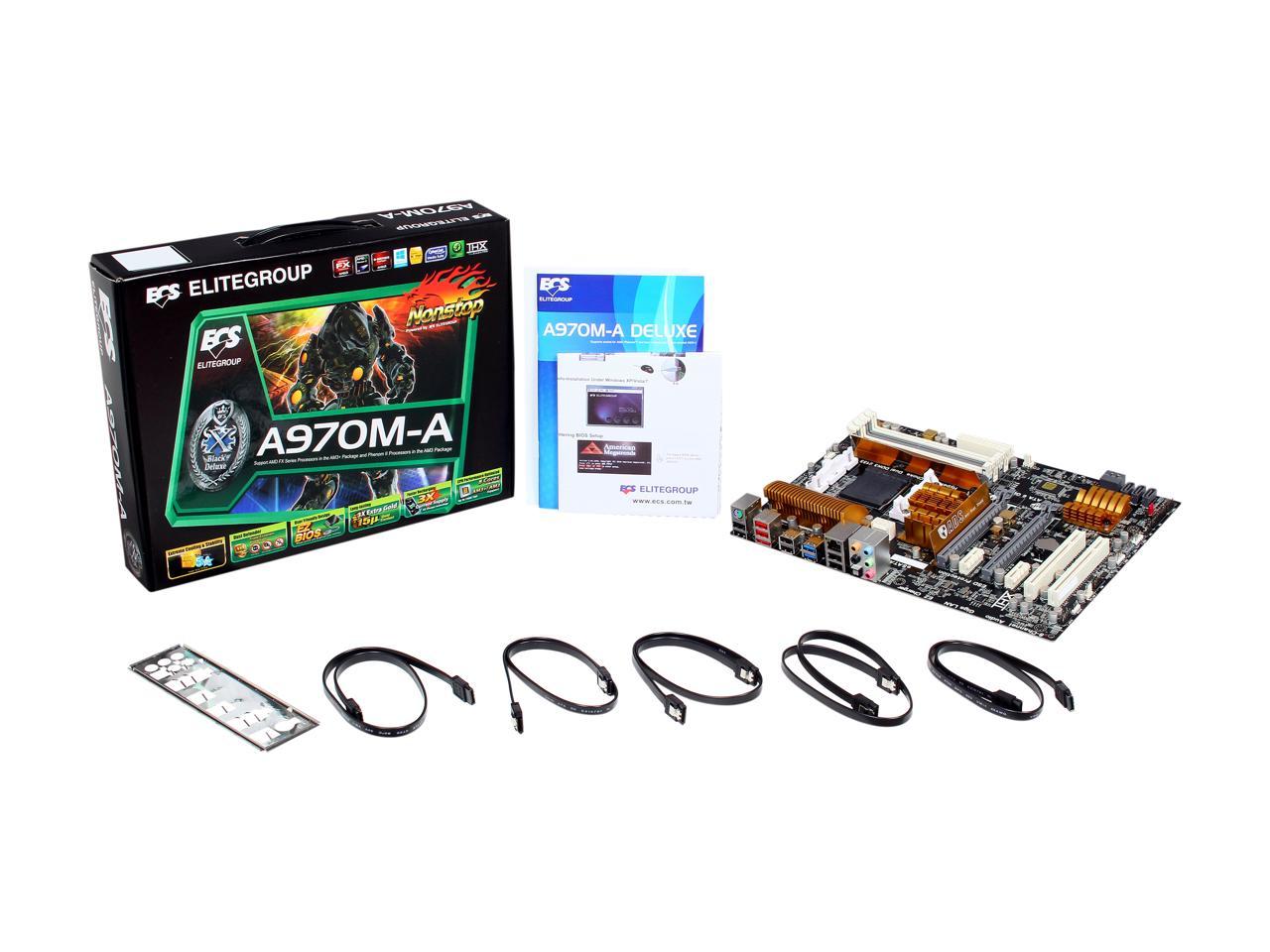 (44) Write a Review
OUT OF STOCK.
Specs
Reviews

Pros: Never Failed so far had for 1 year.

Pros: Price, price and price. This board had virtually all the features I was looking for, including CrossFire support, for pennies compared with the competition. I also like the steps taken to make sure this board will last like the solid caps.

Cons: Not much here, my only gripe would be the somewhat hokey dust shields they include. While they do look pretty cool, I ended up removing the shield above the expansion slots since it would droop down and contact my GPU. Also, the EZ BIOS is a bit lame, but it only takes one click and you get access to the "advanced" BIOS which has all the controls I would expect.

Overall Review: There have been a fair number of negative reviews about this board, so I was hesitant with my purchase. I ended up getting it for less than the price of a few beers at ball game so I figured it was worth a try. Boy am I glad I did, it's been a perfect board for my most recent build and the price really can't be beat.

Pros: Very Stable, Cool running and Overclock friendly board with less money spent. Board's VRM runs amazingly cool. Max temp under load is about 60C. I believe this board has 6+1 Phase design VRM where as other cheap ones has 3+1 or 4+1.

Cons: The bios is bit finicky, some patience is needed. Multiplier clocking does not work with Phenom II Black edition CPUs, it works only with FX CPUs. Board unnecessarily Over volts both CPU and memory, default voltage applied by the board is 1.47v on the CPU (FX 4130) (spec volts is 1.35v non-turbo and 1.4v on turbo, yeah I turned off turbo) and 1.58 on the memory (spec volts is 1.5). NB gets bit hot. PCI-E 16X slots are too close May be Picky on Ram.

Overall Review: Recently this board went on sale, after rebate $18 including taxes and free shipping. Installed the board with a spare Phenom II 720BE and it booted right away but had some stability issues. Later found that board is picky about RAM, it didn't like the spare OCZ DDR3 1600 Ram I had. Changed to Corsair XMS 1600 and no issues. Just for fun wanted to see how far the board can OC, so bought a OEM FX-4130 ($40 from my local store). With big tower cooling and decent PSU I was able to clock the CPU to 5 Ghz with 1.72v. That is massive for a cheap board. For daily use the chip runs at 4.6 Ghz. Games runs flawless with a Sapphire 7870 2GB video card. Nice to have: Front USB 3.0 headers. BTW the USB 3.0 transfer speed is very good. Overall very underrated board. I love this board, wicked fast. The Machine: ECS A970M-A Deluxe FX 4130 @ 4.6 Ghz 4GB Corsair XMS Ram Sapphire 7870 2GB Video card CoolerMaster 500W PSU 5 Ghz overclock - http://valid.x86.fr/nv507l

Pros: Cheap and i mean cheap, i got this board for $14.99 after mail in rebate, everything works, plugged an AMD FX-6350 in and some DDR3 1800 ram with a cheap graphics card and pushed the power button and BAM everything works and works well, how can people complain about a MB that cost $20 or less let alone complain about overclocking it, if it works at OEM settings you got your moneys worth. If you expected more, spend more, that's the simple math of life! Note: this board does have overclock ability but nothing great

Cons: The ADS shield is a gimmick and one fell off after the board heated up (they are attached with double sided tape) and made with pop can aluminum, I took it off and it works just fine.

Overall Review: for $15 bucks i should have bought 2, you cant get a lot these days for $15 let alone a motherboard with these features

Cons: CPU temperature monitoring is either flaking or the board runs a Phenom II X4 980 way too hot. It'll be approaching 50c in the BIOS with the same cooler that ran it at 35C on an Biostar 970 motherboard. When it boots into Windows the temp drops to between 36-40C when according to the ECS OC utility. Don't know which to believe. Also, the BIOS has no CPU undervolting adjustment. Just overvolting of the CPU. I've never had a motherboard that would not allowing to decrease the voltage of a CPU. Plus there's only two case/system fan headers on the motherboard. Most have three.

Overall Review: I really can't complain for the price. $19.99 after a $30 rebate is just crazy. It seems pretty solid other than the flaky temperature monitoring.

Pros: It ran very well with my 125W TDP FX-8120 CPU. I had no problems with system instability after running various stress-testing programs. It is a nice looking board, with lots of features for the price point.

Cons: The DIMM slots seem to be labeled backwards. When I had my DIMMS in the first slots indicated by the manual, the board would not post, once I swapped them to others it was fine. Also, there is no onboard VGA. I was using a video card anyway, but it's always a nice feature for troubleshooting. The bigger problem was that after a couple of days the computer totally died. It was giving one long beep, then 8 short beeps. The manual said this indicates that it's not detected a VGA signal. So, I moved the video card to the second PCI-Express slot, and it detected the video card correctly and POST'd just fine. I swapped it back to the original slot to double check, and it failed to detect the card again, so somehow that slot is just dead. The computer would also not boot into windows, it would freeze on the splash screen. So apparently there were additional problems beyond the video slot.

Overall Review: I received this board as an upgrade replacement for an A960M-M3 that had horrible system instability problems. I paid the difference in price, and was very happy that this board appeared to be working for me, until it crashed and died. I've been involved in an extended RMA process with this company since early December. Up until this point it was always design limitations and never seemed to be a problem with the board quality itself. To have this board fail with an apparent quality control problem like this is very frustrating.

1 out of 1 people found this review helpful. Did you?
Manufacturer Response:
We sincerely apologize for the issues you have experienced. We have emailed you with some trouble shooting steps and a BIOS update to try. If these suggestions do not resolve your issues, please contact us. When contacting us, you can refer to case #ECD13010410015 I or any of my team members here at technical support will be able to help you. Our hours are Mon-Fri 9am-6pm PST. Thank you, Andy Phone# 1-510-456-9836 Email: andy_K@ecsusa.com
Jeffrey S.
Ownership: 1 week to 1 month
Verified Owner
Good as Gold2/21/2013 11:40:27 PM

Pros: This is my first build, and I wanted a mobo that would last and be as trouble-free. I had decided on another board, then I thought about my then current box and recalled that it has an ECS mobo inside. the A970M-A Deluxe had the same features as 2 others, but in the end it was less expensive and from past experiences I knew ECS should last and can withstand a beating. Everything works fine with an FX-6300, and I had no problems with drivers under Debian or Arch Linux. The FX-6300 CPU was recognized and worked on the shipped UEFI BIOS, even though a later one (BIOS) recently popped up on ECS' download page. Newegg was fast to ship and everything arrived together and on time (case shipped from a different warehouse).

Cons: The manual is basically a spec guide and nothing else. Useful tidbits like "the USB port is where you plug in the USB header." It would have been nice if more info about the UEFI BIOS was included, like settings and the like. My DD3 1600 ram modules read as 1333, but that is common with most mobo's it seems

Overall Review: I'm looking forward to a long-living ECS motherboard. Even though they don't offer Linux support, everything works out of the box, and I managed to successfully flash the BIOS with the 11/2012 update. It's a good value board (so far).

Pros: Excellent feature set and performance at the price point (at time of purchase, it was selling for around $70). The board looks fantastic, for those with clear side panels. I have been running it for four years now and it has definitely exceeded my expectations. The accessory package was very good with plenty of cables. Supports AC97 front audio headers if you have an older case. I was concerned that the dusk shield might interfere with my heatsink or GPU, but it was not a problem. I would have purchased two if I could do it again over again.

Cons: There is no bios undervolting function, which I found somewhat bothersome since I like to undervolt. It will, however, undervolt with AMD overdrive. BIOS in general wasn't as feature-filled as some, but its plenty adequate for most users. Seems to run my X4 635 with a tad more voltage at stock than the most boards. This was not a problem, but worth noting, and easily fixed manually via AMD overdrive. I am undecided on the dusk shield feature, as there hasn't been enough dusk in my case to draw any conclusions. Doesn't support 9000 series FX chips, so look elsewhere if that is your intent.

Overall Review: At the time of purchase, there wasn't a better board anywhere near this price point. It has a few small issues, but far fewer than other similarly priced boards. It looks great, it runs very well, and is easy to install. It's not available as of this writing, but if you need an AM3+ board and run across one of these, don't hesitate to purchase it.