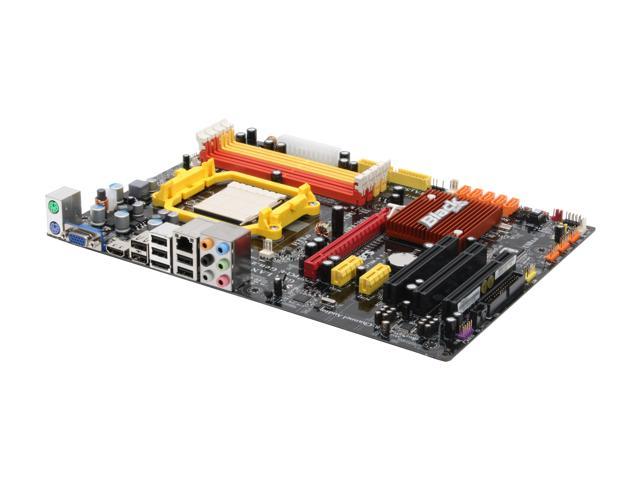 (451) Write a Review
OUT OF STOCK.
Overview
Specs
Reviews
Get more for your money with the GF8200A motherboard by ECS. This ATX board supports AMD's Socket AM2 and AM2+ single- and multi-core CPU's including the Phenom II, Phenom, Athlon 64 X2 and Sempron processors.
Install up to 32GB of Dual Channel DDR2 memory in the four 240-pin slots to deliver multi-tasking processing power. Hyper Technology 3.0 doubles the data transmission rate between the CPU and the graphics adapter for superior operation. The onboard NVIDIA GeForce 8-series video chipset can be boosted with a PCI-Express 2.0 x16 graphics card with support for Hybrid SLI.
Add 8 channels of HD audio to your video with the IDT 92HD206. Expand your system with six USB 2.0 ports along with five SATA-2 connections and two Ultra DMA133/100/66. Gigabit LAN lets you connect at broadband speeds to a home or business network.

Pros: I bought this Mobo with a bit of hesitation because of its price. Went in and fired up first time without any issues. Been running strong an stable for 12+ straight hours. My old mobo died and I needed something with onboard graphics til I got my new card. All I can say is wow, this mobo blows my buddies msn-sli away. This might not be SLI but it can handle 1066 ram, the new Phenoms, has all the features if you want to upgrade in a few months like I do. I built this as a get-me-by-for-now system and unless it dies soon I will be using this mobo until it does. Looks awesome

Cons: Not SLI but if you got a 8800 and aren't rich it's not a con at all. IDT driver on the cd that came with the mobo didn't work, just downloaded the newest from IDT's website, works fine now. Northbridge only has heatsink but stays cool enough to touch. Again, not really a con.

Pros: This motherboard has everything I need and more. With a nice backup onboard graphics great while your waiting for a graphics card upgrade. I don't use the sli mode. Some of the other reviews were not fair. It's a new board and there working on the BIOS & Driver's be patient. You won't be sorry. What a deal. Thanks ECS Your support is "Excellent" I called several times and they were very helpful and polite. They made sure all my questions were answered before I got off the line. It always helps when your polite to them and patient!

Cons: Because it's a new board I haven't been able to get Everest or other system info tools to work with board. temp's, memory spec's , ect...

Pros: Now have built 2 of these I own one of them my customer loves his we are both Nvidia fanboys. I will admit some of the bios settings have to be set at the first boot some things need to be in Automatic and if you read the reviews from Birdman and a few others you will find those tweaks most of them just need to be set to AUTO. I also right after installing Vista go to ecsusa.com and get the latest bios the flash will fix a few issues and upgrade the type of CPU's that are compatible. I am using the AMD Kuma its a great X2 with Phenom features at a low affordable price my games play smoothly and look awesome in Hybrid SLI using an inexpensive BFG 8500gt. While at the homepage or while your waiting for your mobo to arrive download all the latest drivers this will make your build go more smoothly. I used Vista 64 bit Ultiimate had no issues installing it and have 4gb of pc6400 not one complaint. Runing Windows update will help also.

Cons: it doesn't make coffe when I am up late gaming

Overall Review: If you already have an 84 or 8500 pcie video card you can greatly extend the life of it with this mobo. I won't call other negative reviewers inexperienced but I will say this I have been buying ECS for 1 1/2 years now due to the money savings on builds which I can pass on to my buyers and not one has comeback doa and the one and only doa I had on any ecs board was during install and within the return policy period Newegg took good care of me and paid for return shipping as well. I had my replacement in a matter of days. I always read all the specifications on anything I buy and never assume just cause your a buider that you know everything modesty and pre planning can go along way in having a succesful buid and business relationship with your buyers. Also check out the other Black Series ECS boards they are all great and depending on your preferences one might be more suitable to you like the ATI. Newegg has the best online Catalog of goods and customer service to match.

Cons: Don't use the new AM3 processors unless you want to be stuck using ddr2 800 speeds. Am3 processors do not support ddr2 1066 and this board is not compatible with ddr3 1066 wich is what the AM3 uses. Don't get me wrong! The AM3 processor will work but only at ddr2 800 speed. You would be better served to buy an Am2+ processor and use ddr2 1066 memory. Also please note that this board DOES NOT SUPPORT PROCESSORS WITH A TDP ABOVE 95 WATTS ! It will most certainly overheat. The northbridge cooler has been strategically placed to suck hot air right into your videocards cooling fan if the fan is at the same end as the cards power plugins.

Overall Review: This is a good board for what you pay for it. A little attention to detail will save you a lot of headaches. If you are on a tight budget I would recommend this board.

Pros: Simple to set up and everything seems to work so far. It came with the latest BIOS installed. It auto-detected my Athlon X2 5600 2.9Ghz 65W, dual-channel DDR2 800, and all SATA drives just fine. Seems to be stable so far. But I just installed yesterday. I wanted to chime in primarily to re-affirm the AHCI/SATA issue (see "Cons" below).

Cons: As the review below mine mentioned, the default setting in the BIOS is AHCI mode. This caused blue screens of death on Windows XP until I changed it to SATA mode. Now everything works fine. Other than that I haven't had any issues yet. The lack of firewire might turn some people off, but I don't use any firewire devices so it's no big deal for me. The 95W CPU limit isn't a huge issue with me either since I'm using a 65W CPU, but it could limit my upgrade choices in the the future.

Overall Review: Aside from the bios SATA issue, I'm generally pretty happy so far. But, again, it's only been a day. I plan on using it (along with my newly purchased Radeon HD 4770) to do some gaming this weekend so I'll see how well it holds up to that and check back if I have any problems.

Pros: Easily fits inside a mid ATX case. Layout of the board is logical. HDMI and Hybrid SLI is supported, I was looking for Hybrid SLI for a cheap price. I've used other ECS boards in two other economy builds and they seem pretty solid. The builds are still running strong.

Cons: Attached to case by 6 screws. There is an overhang of about 1 inch from the last row of standoffs. As a result there's a noticeable flex in the board when you're plugging things in on that side (be careful!).

Overall Review: The first board I got was a dud. Kudos to Newegg for making the RMA process extremely efficient and painfree. The whole process for me took less than a week! Someone else mentioned the BIOS settings. If you get this board examine the BIOS settings carefully! I kept getting a BSOD when trying to install XP Pro. It turns out AHCI was enabled in the BIOS. Well that's for an Intel chipset for one and since you don't have drivers loaded on a clean install it'll cause the installation to go nowhere. Changed the AHCI to SATA mode in the BIOS and XP installed like a charm. I should have looked at the BIOS more carefully!

Pros: Onboard HDMI was recognized at boot as my display output. I have had problems with previous integrated video HDMI ports not being enabled on boot, and with out a proper monitor in my house this was a GIANT relief as there was no additional fuss. glxgears averages around 1450fps, not too shabby at all. I also tested with projectM audio visualizer, and extremely happy to report that at 1024 everything flows nicely and steady even when windowed. At 2048 projectM runs fine for 99% of the themes, I only had noticeable frame drops on 1 of theme.

Cons: Non yet. It simply worked.

Overall Review: I'm running Ubuntu 9.04 (Jaunty) 64bit w/ 4GB DDR2 RAM. Everything was recognized and worked out of the box. Note: Because my previous board required it, I have "pci=nomsi" set as a boot option, not sure if this board requires it as I haven't tested with out the option. If you have issues with SATA drives not being recognized you will want to boot with this option.

Overall Review: The onboard video is a little weak. If you want to play blu-ray/H.264 movies encoded at 1080p on the big screen TV, you need to hybrid the onboard video with either the GeForce 8400GS, 8500GT, or 9800 GT(...check their NVida website for the list of hybrid video cards). I'm currently doing the SLI Hybrid with the 8400GS and all my movies are playing smoothly at 1080p on my 52" display. No more video and audio out of sync :) Note: Before doing the Hybrid thing, my 1080p video and HD audio was sometimes out of sync. At first, I thought that my CPU wasn't powerful enough, so I upgraded it to the Phenom II X4 940 Deneb 3.0GHz, but that didn't solve the problem. Wish someone have told me that the onboard video was the one that need to be boosted. Hence, I hope this review will provide some help for the HTPC builders. PS: Why Hybrid? Because I can get the GeForce 8400GS for around $20 and I want to feed both video and sound via one single HDMI cable.