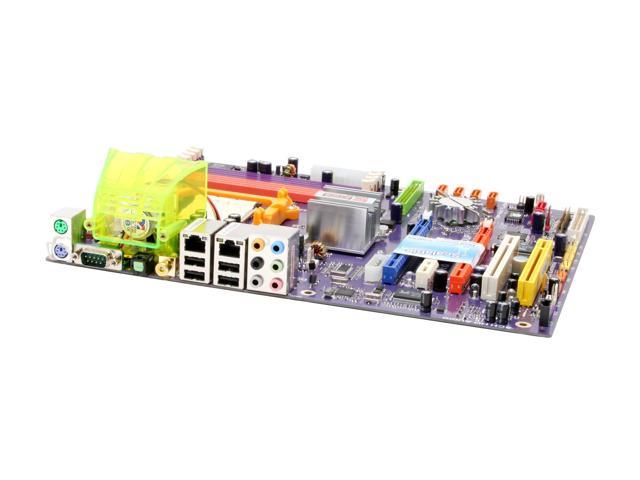 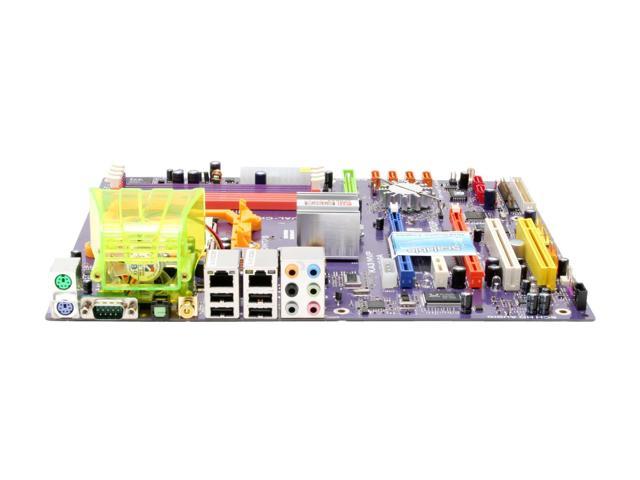 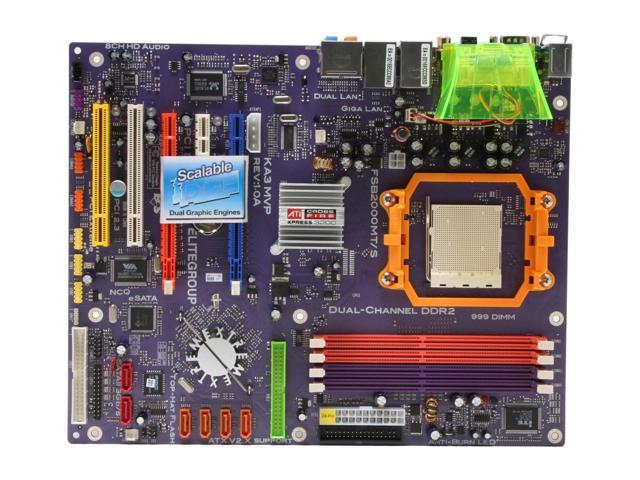 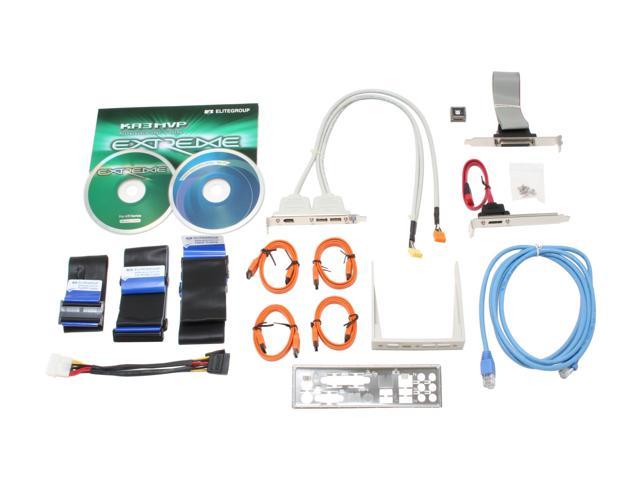 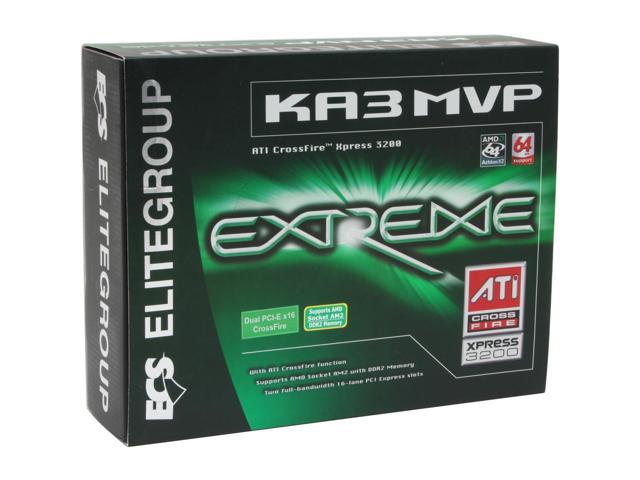 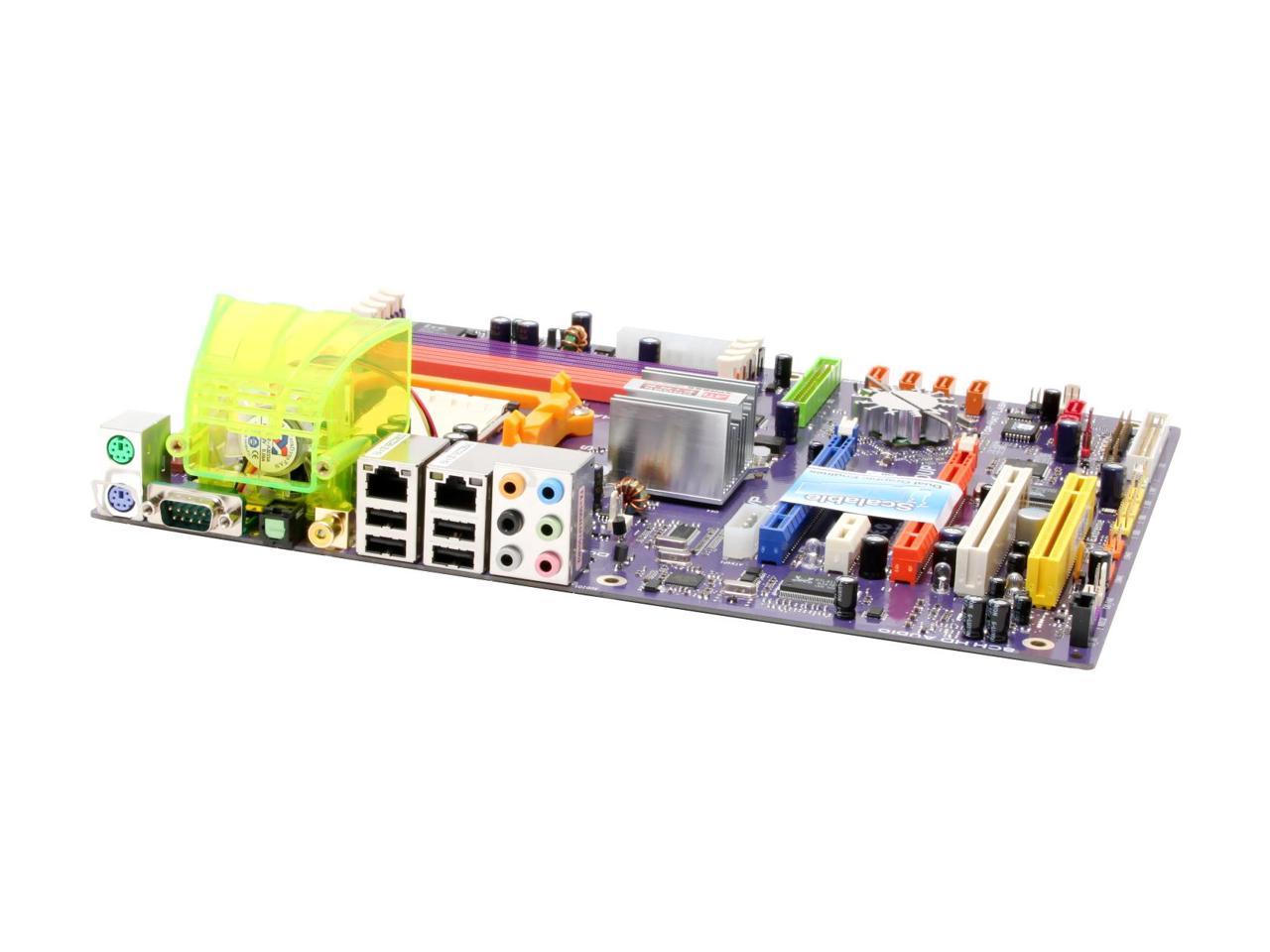 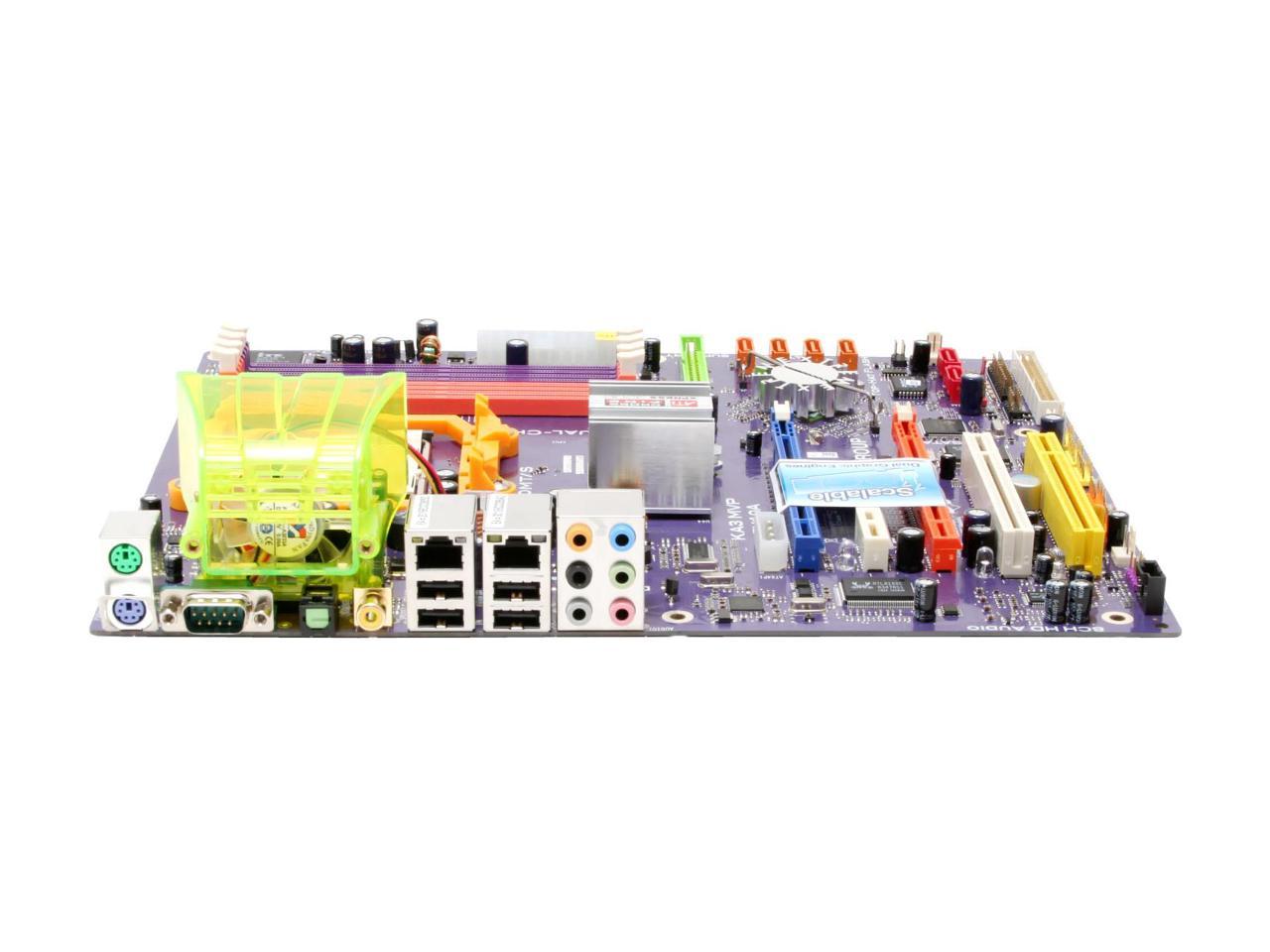 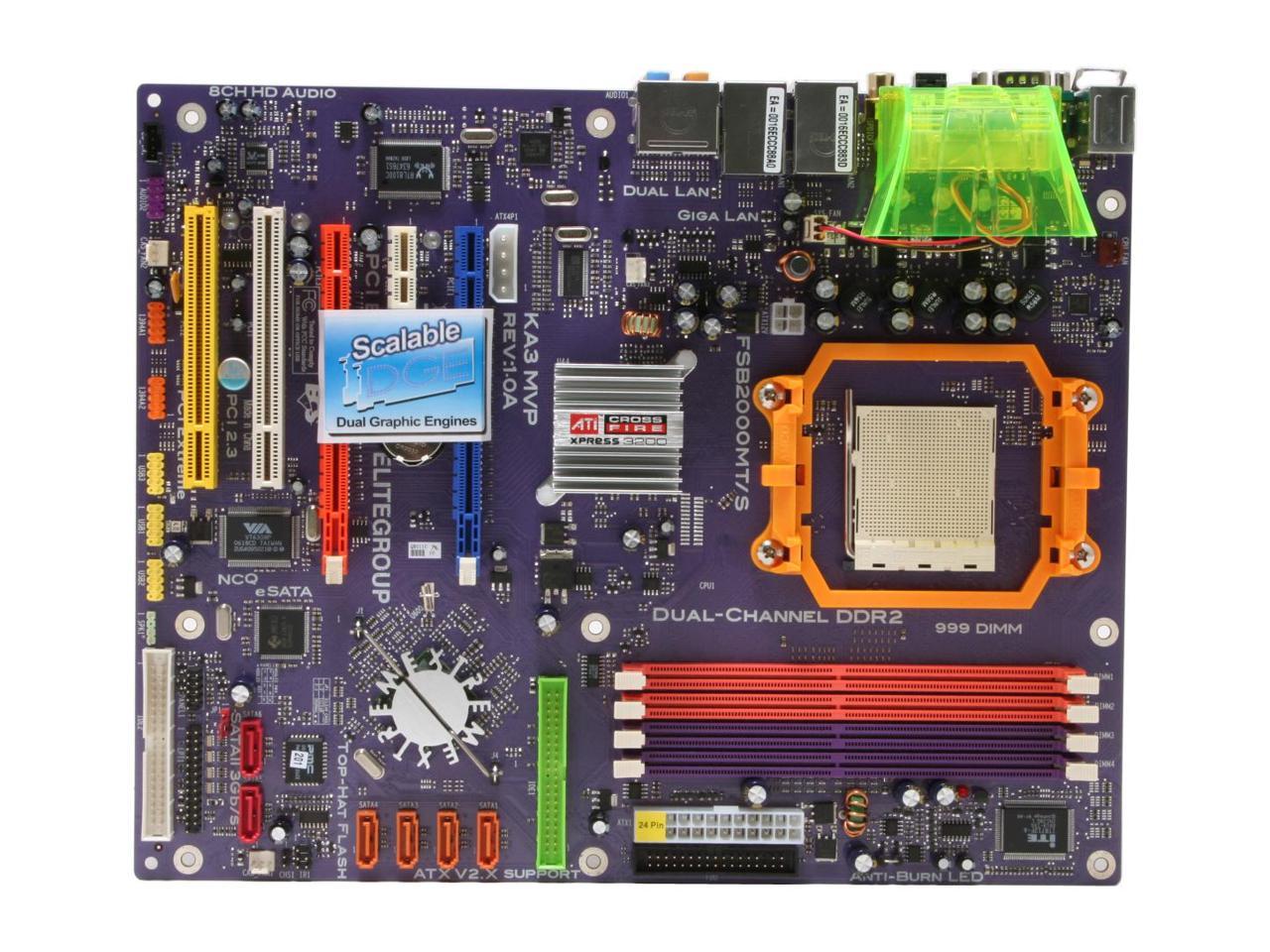 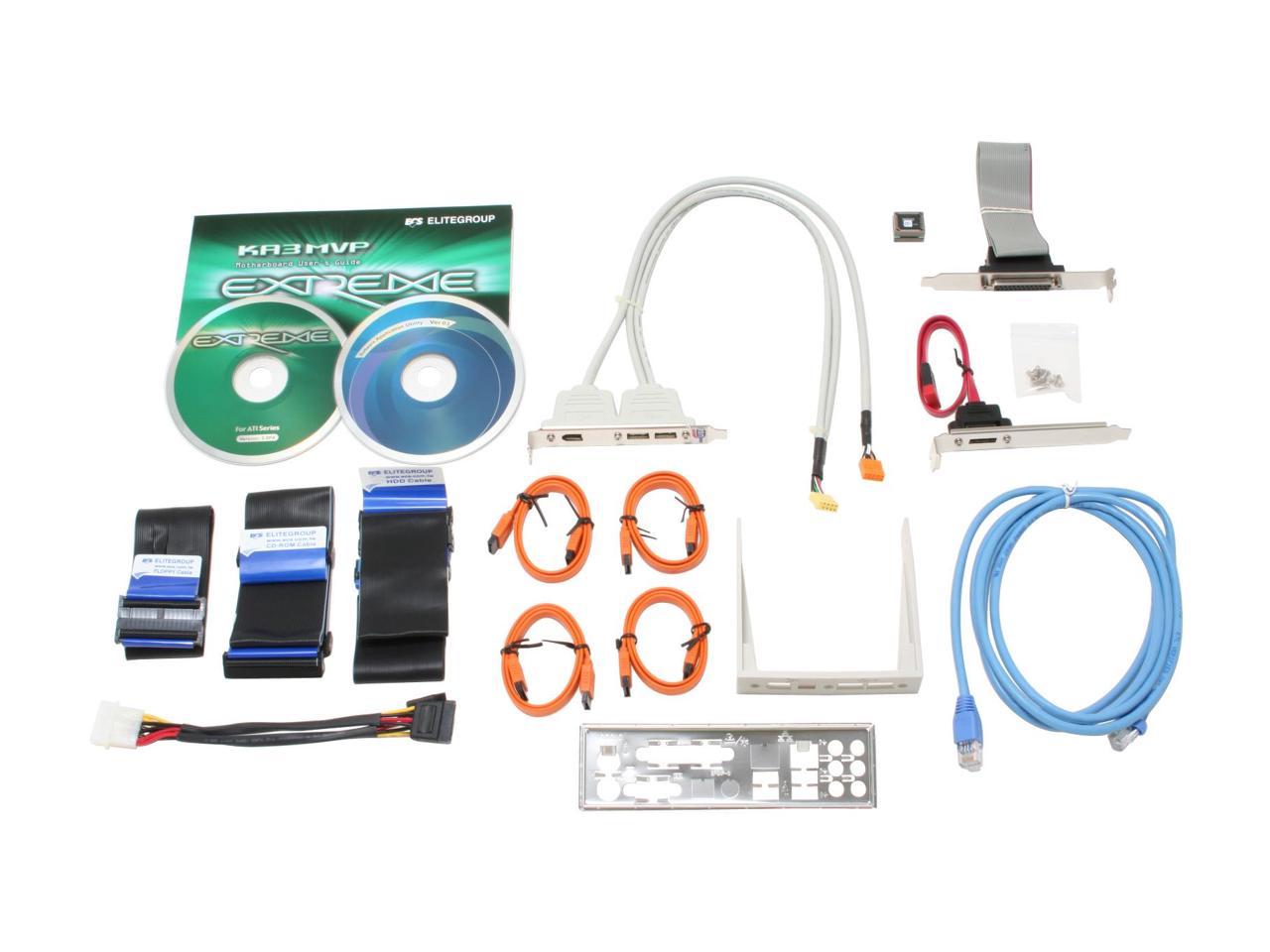 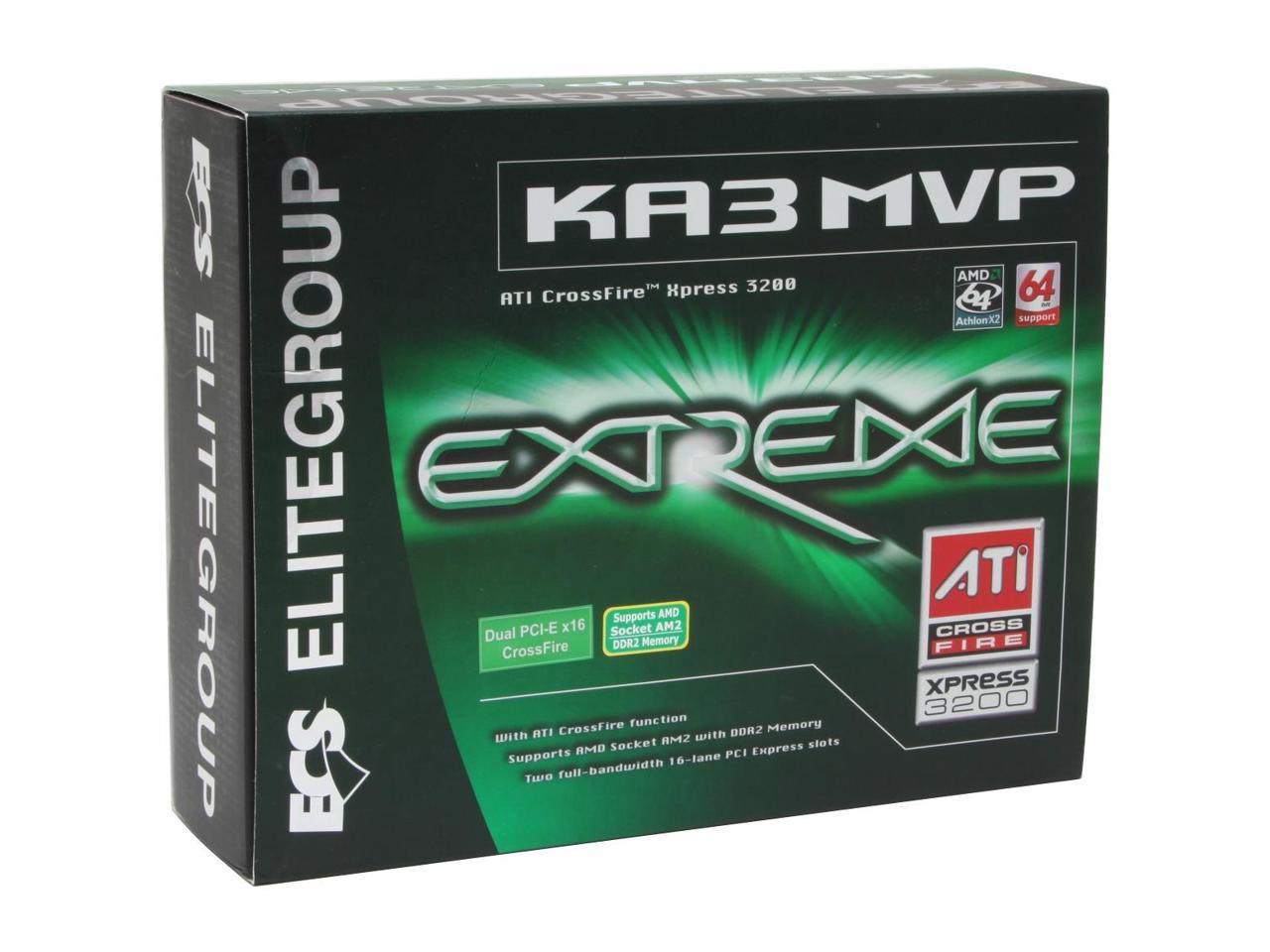 (187) Write a Review
OUT OF STOCK.
Overview
Specs
Reviews
The ECS KA3 MVP is an upscale, full-featured motherboard with plenty of power, designed specifically with the gamer in mind. Equipped with an AMD socket AM2 suitable for Athlon 64 processors, including the X2 and FX series, it's more than capable of handling anything you throw at it. Using the AMD 580X CrossFire chipset, it supports CrossFire, letting, you use 2 graphics cards together for even more processing power.
It also includes support for up to an astounding 32GB's of DDR2 memory, gigabit and 10/100 Ethernet ports, 7.1 channel onboard sound, and 6 SATA ports. Go ahead, add more hard drives to the system -- it supports RAID 0, 1, 0+1, and JBOD. The KA3 MVP has two x16 and an x1 PCIe slots, plus an additional two PCI slots. For any gamer that wants to build a killer system, the KA3 MVP is an excellent motherboard to build on.

Pros: Overall a very good motherboard, particularly when you factor in the price. very full featured and plenty of connectivity.

Cons: BEWARE of the crossfire set up!! I bought 2 double height X1650 video cards and installed them. They barely fit and the top card overheated. New egg was awesome on the replacement and I boght an MSI mobo with more room between the PCI 16 slots and am running fine now.

Overall Review: You'd think a motherboard engineered for crossfire would be better laid out. Too bad as this is a much nicer board features-wise than the MSI I had to buy to replace it. Good news for the wife though. I built her a machine (non-crossfire)using it and she's WAY happy.

Pros: I plugged in a 64 X2 3800+ Windsor, 2 gig PC5400 in dual channel, Asus Gamer GPU, Rosewill 500W PS, hit the start button and away it went! All runs very quiet... the only thing I can hear is my cheesy side case fan. Bios update was very easy using the program on the supplied CD.

Cons: Well, my knowledge of the technical stuff is slight but I think a little more space between the memory sticks would be a good thing. The heat spreaders on my PNY 667's are touching.

Overall Review: This is my first build. Kelly Bundy would seem a rocket scientist compared to my knowledge of computers but all this stuff just kinda fell into place. One click in the bios and CPU speed went right to 2.4GHz. Hey, working great for me!

Pros: Stable... kinda; loads of peripherals, cables, extentions and the like; relatively good layout; the 40mm fan actually seems to have a small effect on CPU temps; good budget board.

Cons: Does not overclock for (explitive of your choice): poor voltage control, terrible CPU clock cold-boot problems, BIOS must be manually flashed on settings that refuse to boot, board can hang for upwards of 1 minute before booting and running stable with some overclocking settings. Max CPU overclock I've heard of with this board was ~250; average of ~220: I managed to get 229x12 with an x2 4800+, so I'm ok with that.

Overall Review: If you have an FX and can unlock the multiplier, you can probably get a DECENT overclock out of this board, but you will never, ever, EVER get a great clock. If you don't want to play with the clocks and just want to run everything the way it comes (or the way it's supposed to be run, as a lot of DDR2 RAMs won't report at proper settings), this board is great and highly recommended, especially for $xx after rebate.

Pros: I've used this board as a workstation for several months and it is solid*. Has a lot of good features and overclocking for when you need it. Maximizes the performance unlike some boards that hinder it. Has a great PCIE slot layout except for the closeness of the X16s which some Video Cards may touch.

Cons: ECS will not support Phenom on this board.

Overall Review: I did experience one problem where I was using 4 sticks of ram CL4 and CL5 it works for a while then started shutting off. Replaced with two sticks of GSkill and its solid 24/7. Overclocking, you have to know how to set timing and voltages if you do it, espescially with the higher GHZ chips.

Pros: The board glows with a creative color scheme, complimented by some attractive blue lights spread throughout. Nestled within you'll find a wealth of ports to meet all of your major mobo needs and the box comes loaded with extra parts, cables, and doo-dads. Uses the comfy Phoenix BIOS platform, which works very well. Board stays cool even with one small fan near the top that not only stays out of the way but keeps quiet. The manual is actually useful and the driver CD's are nice.

Cons: Can't really find anything to complain about it. As with any board, things can get crowded when you start cramming cards into the PCI slots, but that's to be expected.

Overall Review: For the price, this board manages to be reliable and offer tons of extras to the casual system builder and professionals alike. Highly recommended.

Pros: Performance is great. Motherboard has plenty of room for my very large Zalman heat sink. The fan that comes on the motherboard also seems to help keep my system running cool. I've had no problems so far. Have not taken advantage of the crossfire yet, but is a nice bonus. All-in-all great board for the price !!!

Cons: Only one - the secondary IDE is at the bottom of the mother board. If you own a mid-size case, the IDE cable is just long enough to reach my CD/DVDROM at the top of my case. The second plug on the cable is not long enough to place a second CDROM directly below the first. You will have to place it a few levels lower for the second plug to reach unless you can find a longer IDE cable. It's not something that can't be fixed.

Pros: Still works fgine, the options are more than enough for myself and overall very good system stability.

Cons: Some minor issues: system hangs if I manually set the fan temps for the CPU, I guess it doesn't change speeds accordingly. The placing of the SATA 2 connectors can give you a headache with most huge ATI cards and lets not say aftermarket coolers. Not enough space between PCI X16 ports: I bought two aftermarket coolers just to find out that they won't fit because the top card hits the bottom card and the lower card is in the way of the SATA 2 connectors. Onboard Audio is a mess, Realtek HD is nowhere near comparable to Creative's Audigy 2 or higher technology. dual Channel RAM placement is somewhat awkward.

Overall Review: As you can see, I still regard this product very highly, even though I have so many issues with it. Tehy're mostly minor issues and shouldn't bother anyone other than the true enthusiast, which isn't the majority of us. I should also note that overall the placement of things is awkward, and the RAM chips for Dual channel require them to be next to each other. Also, the blinking blue lights near the PCI ports blink at a non-harmonic rate, meaning that you'll have the lights blinking in order and then they'll start blinking randomly. really I would wish the placement to be better, but the motherboard is very solid.

Pros: This is a great board, I have had it right at a year, it has been in crossfire, it has had a single card, it has had Nvida and ATI cards in it, it has had multiple CPUs, swapped in two different cases and withstood a house fire, which made it a lovely black color. It is easy to over clock look it up on www.pcstats.com for a quick guide on how to do it if you’re a newb. This is my favorite board and will remain so until something better comes along.

Cons: Some of the terms in the BIOS are different than in other motherboards so you have to play to figure out what to do. The Clear CMOS jumper will not work on mine so if I push it too hard I have to pull the battery, Takes a while for BIOS updates too.

Overall Review: You do have to set the memory manually; it defaults to 400 even though it is on AUTO. This is a good board to play with if you are just getting into Over Clocking. Plenty of options and you can always set it back to default.