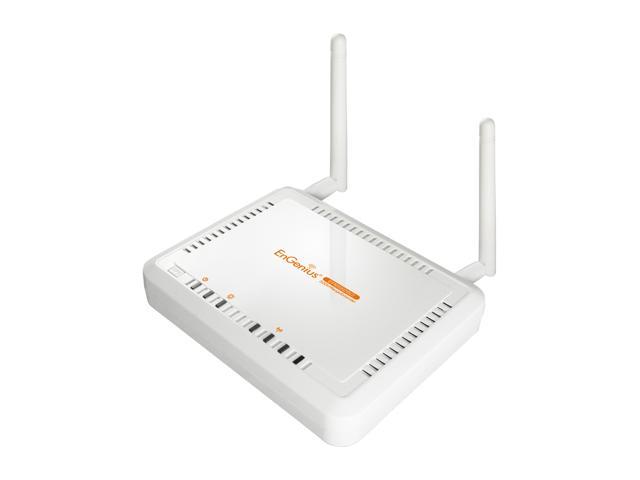 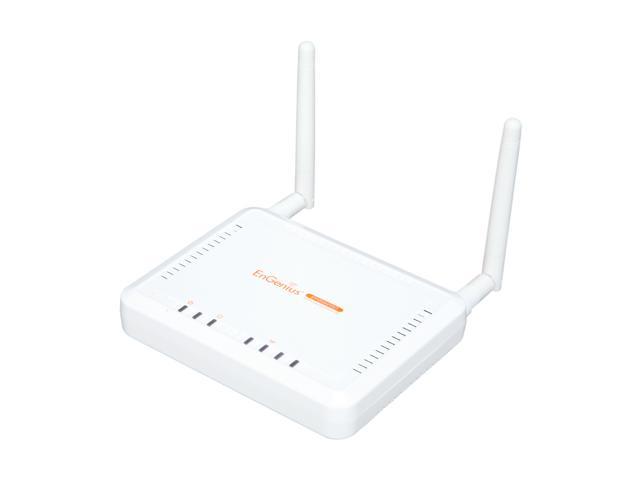 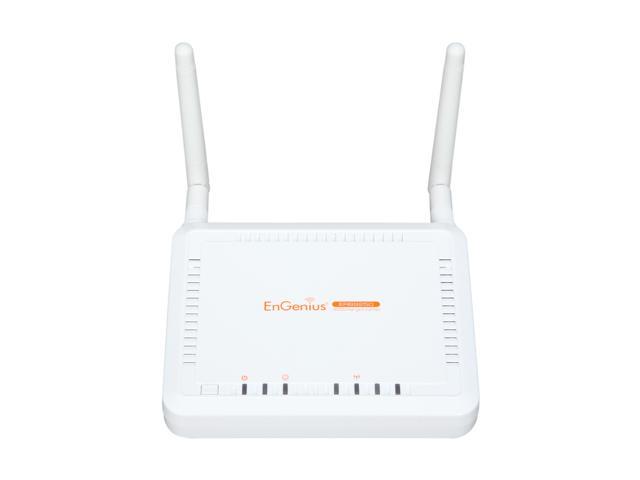 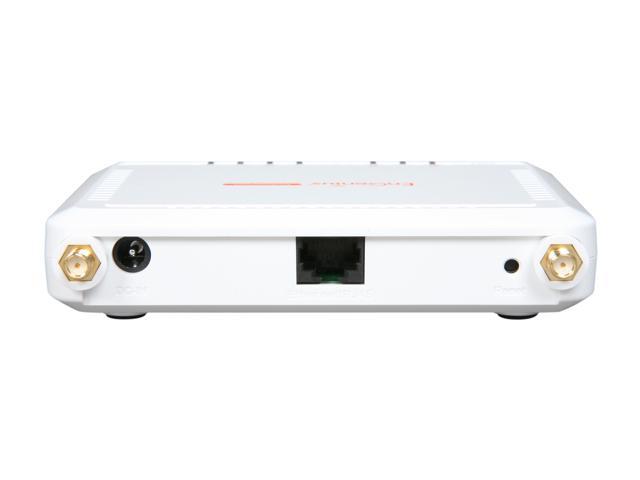 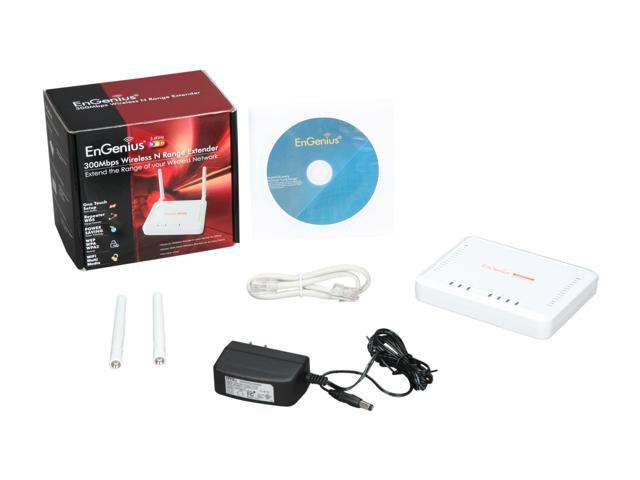 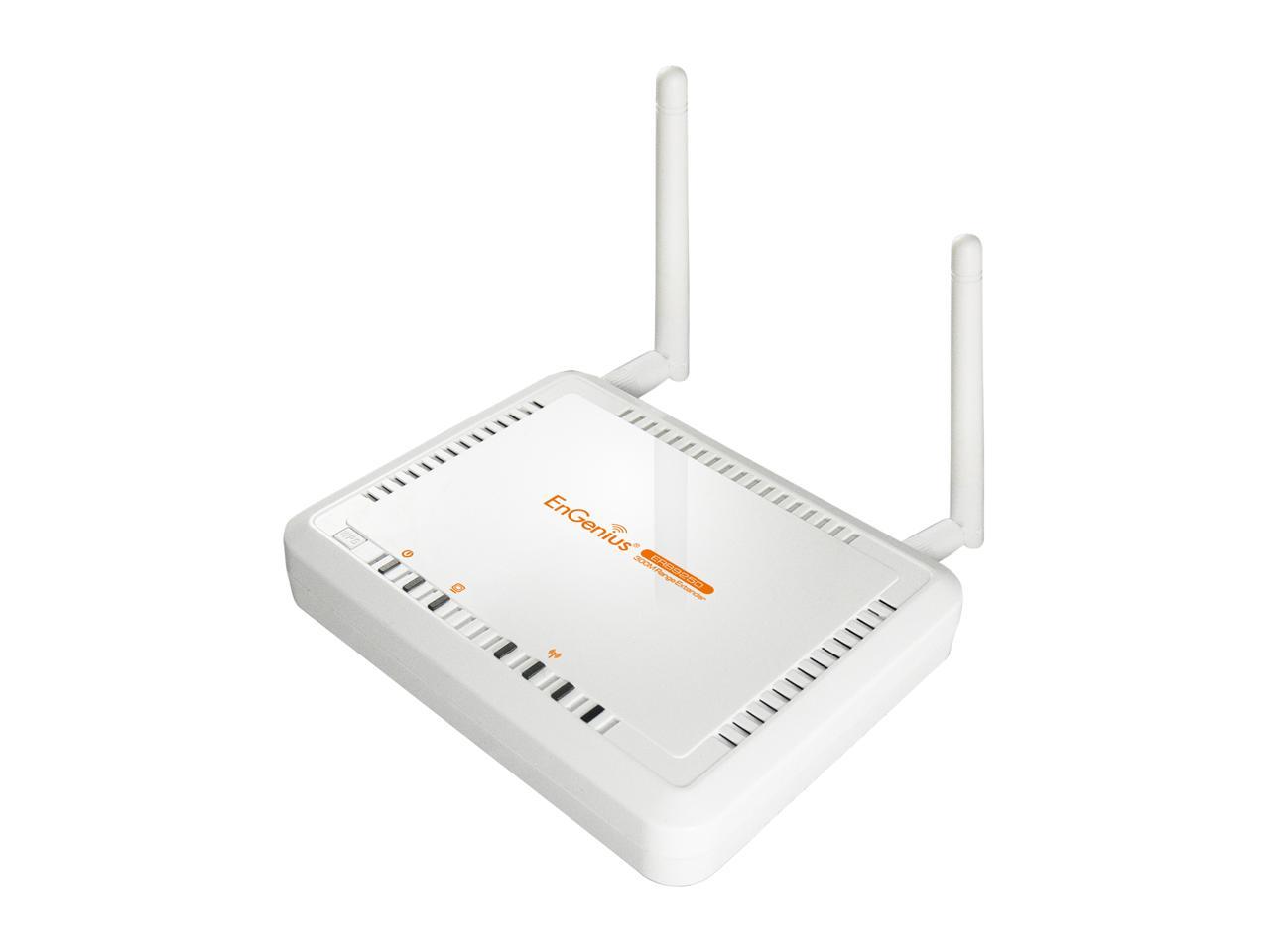 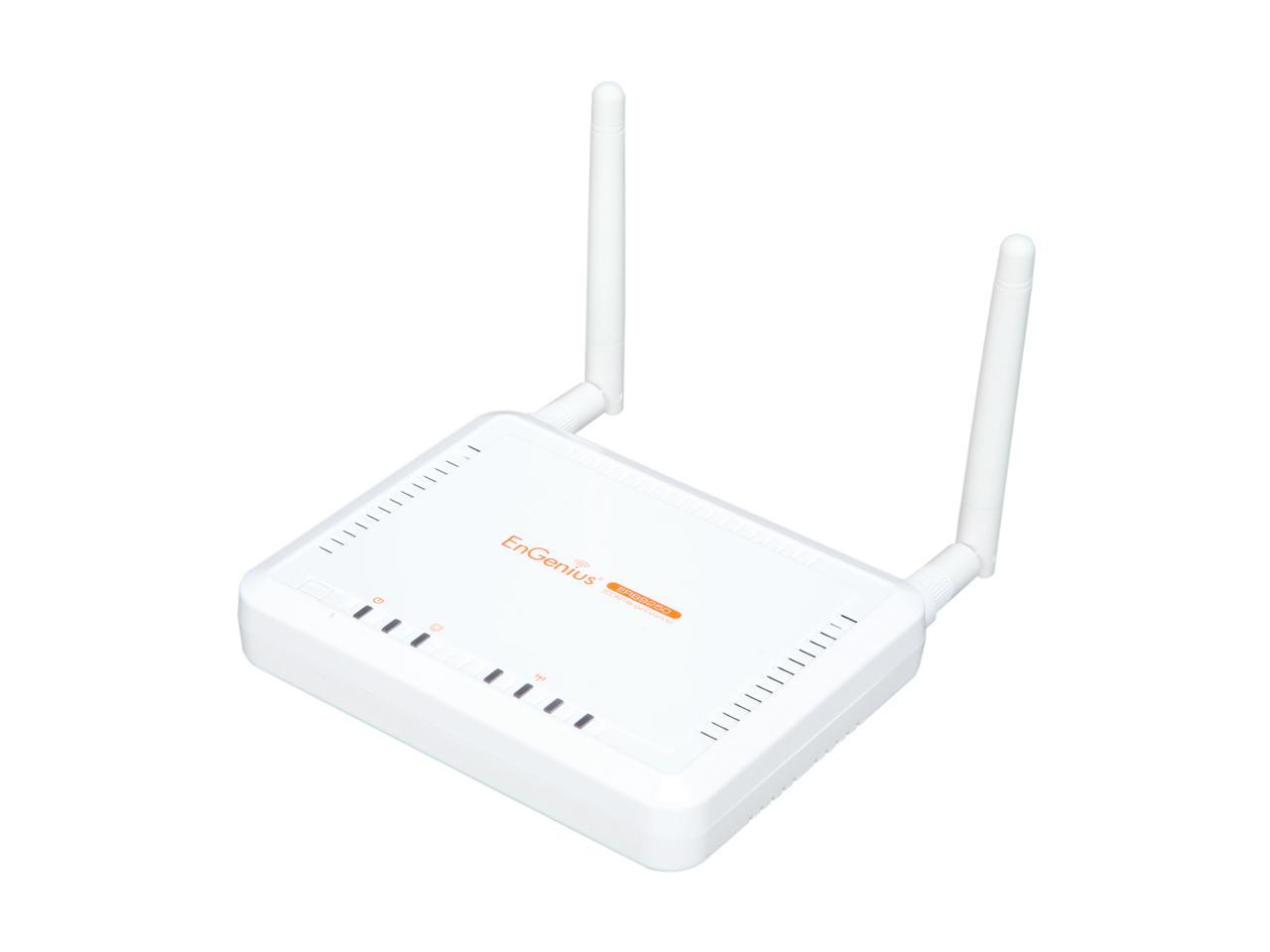 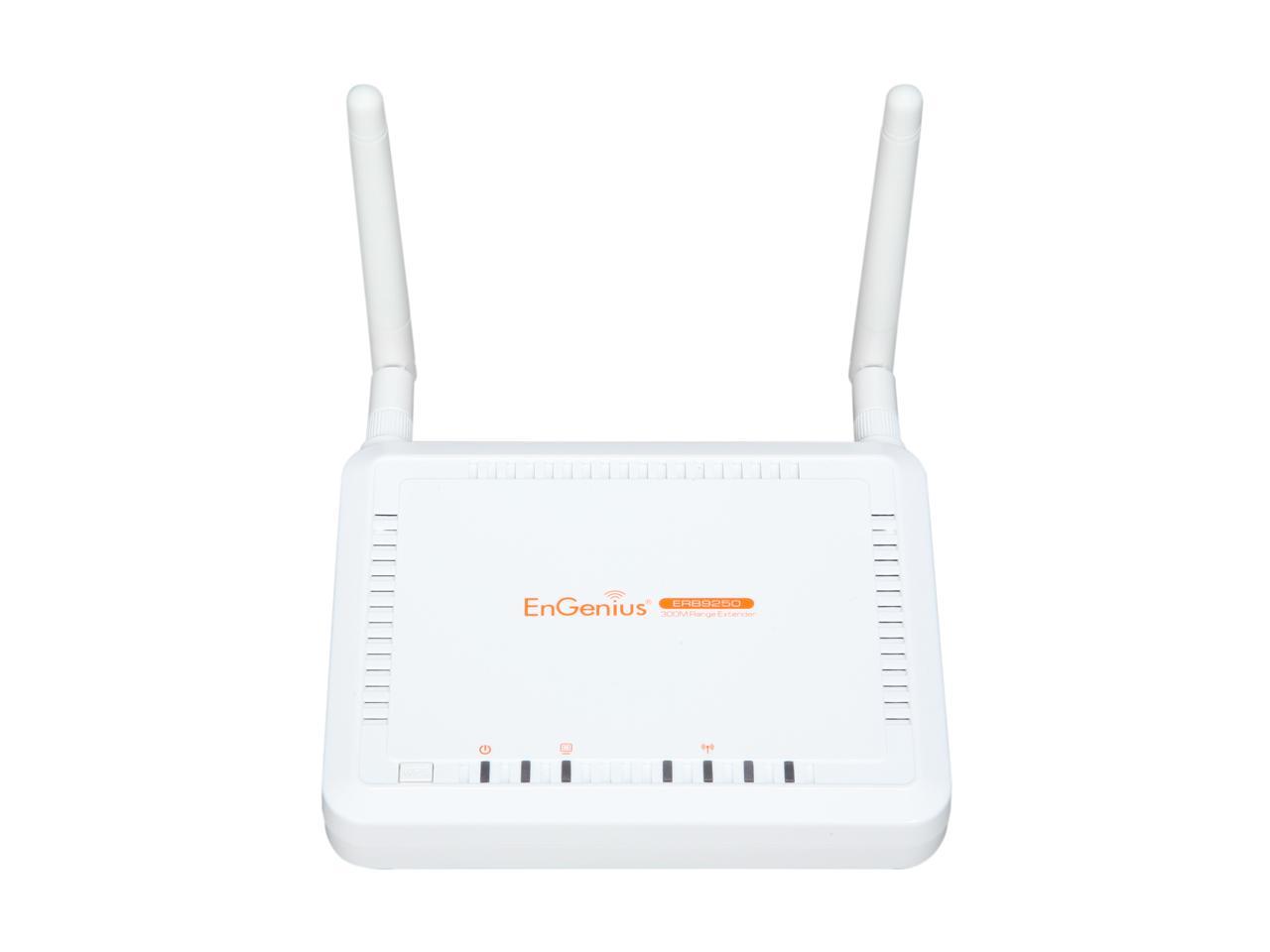 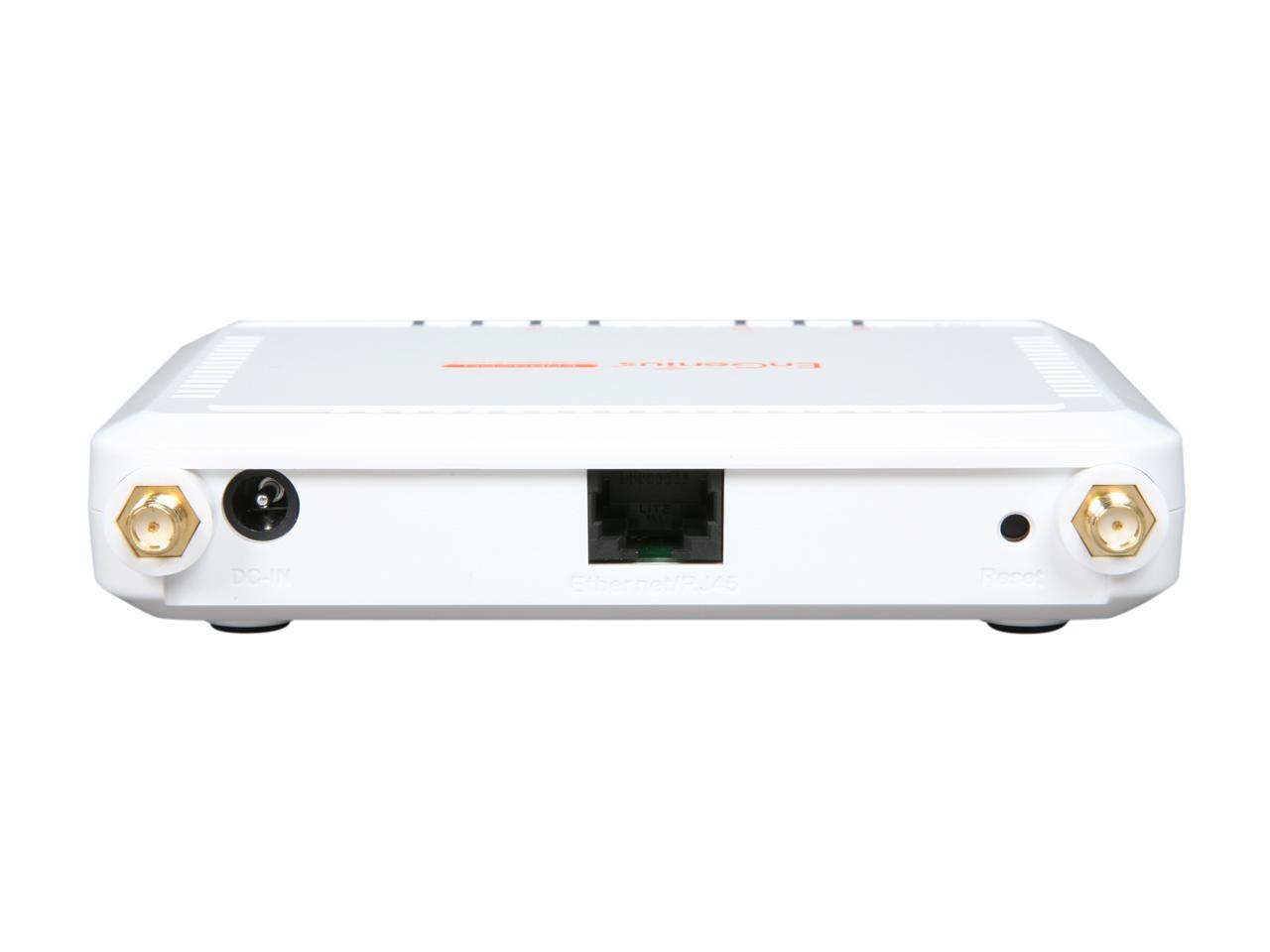 Pros: Head to head competition Amped Wireless SR300 versus EnGenius ERB9250. At a distance, on a PC, the ERB9250 indicated two bars; the SR300 scored a goose egg. Second assay: Using Amped Wireless’s smart phone app, EnGenius scored 86% (-67 dBm) versus Amped’s 76% (-72 dBm). Manual install is as simple as connecting an Ethernet cable to a computer > cable to the device > type default IP address > follow uncomplicated instructions. I didn’t have a clue about EnGenius, other than networking. . . After doing a little research, I was impressed, their web site says, “Wireless connectivity solutions for hotels, resorts, high schools, universities, corporate campuses, sports stadiums and arenas. . .” To get an impression of their expertise, go to their web site, click on success stories, enough said. Before contemplating adding networking equipment, understand what you’re buying (there’re misconceptions). Wireless repeaters and wireless range extenders are the same; they relay Wi-Fi (passing it along) & visa-versa (back). Be aware, the device “needs” to be positioned where there’s a good signal (sweet spot); otherwise, desired results are apt to be compromised. From a utilitarian point of view, it’s a wireless extension cord. The thing works as advertised; it’s capable of enhancing connectivity into fringe areas significantly.

Cons: Overhyped Client Bridge > Repeaters are customarily placed midpoint; the client bridge (Ethernet wired device, to a wireless network) being part of the package, placed (typically) center rather than at an intended destination point. Practicality wise, you’ll need two of these, one midpoint and a second at the destination: Blu-ray player, set-top box, DVR or game console.

Overall Review: Suggestion: Download a Wi-Fi strength app onto your smart phone. Use it to survey placement of this device, be sure placement is within an acceptable signal area - now - take that signal source and place it at that location; make another survey to see what you’re likely to accomplish. Something worth considering - when - deciding between this and something costing much more, from my perspective, judging from what I’m accustomed to; this is an “outstanding value” + excellent performer.

1 out of 1 people found this review helpful. Did you?
Carol C.

Pros: The unit is very light and feels a bit on the flimsy side. It's small enough to place on top of a shelving unit and be pretty well hidden. You may still see the two big antennas sticking up though. The power cord is pretty long to give you enough slack to place it somewhere inconspicuous. There are 2 configuration methods: connect via CAT5 directly to the unit, or use WPS. Using the CAT5 method, the basic setup was extremely quick and easy. Just follow the simple instructions. You also have the option to set up the extender using more advanced settings (which takes you to the extender's configuration management web interface). There are quite a bit of features, such as mode (Client Bridge or Universal Repeater), wireless settings (band settings, SSID name, thresholds, intervals, channel bandwidth, Preamble Type, CTS Protection), security settings (WMM, encryption type), mac address filtering, diagnostics, backup/restore config, etc. I did not get any disconnects once.

Cons: The instructions say as long as you're on the same subnet, you can access the web interface using the provided URL. It doesn't work. As with many other extenders I've ever owned, you typically have to be connected directly to the unit in order to access the interface. The extender provides a huge boost for signal strength, but the speed tests were surprisingly poor (see test results below). This isn't really a negative but the unit has extra LED's that it doesn't use, which I found strange.

Did you find this review helpful?
Robbin N.
Ownership: 1 week to 1 month

Pros: Small case with a load of LEDs on the top of the case. The quick setup was extremely easy, my 12 year old Grandson was able to set it up by himself and he's no tech wiz. Two detachable antennae, power socket, recessed reset switch and a single RJ45 port make up the rear panel of this little device. The wall wart is small and does not occupy more outlets than it needs to on a power strip! Throughput is good but limited obviously by the Wi-Fi. With wireless n I was getting circa 8 Mbps on my laptop via this item, see cons and other thoughts about this.

Cons: Using something like this comes at a price, and the price is that your overall throughput on your wireless network will be affected. If you have lots of wireless clients then this will become apparent fairly quickly, at last count I have 12 (where did they all come from??). Also this device needs to be put into an area that has a relatively good signal which it can then rebroadcast, this tends to cut down the range that a user will think they can possibly get from one of these. I know using ERB9250 to stream video, severely affected my Fire Stick and Chromecasts ability to do the same simultaneously, but then Wi-Fi does have a limited bandwidth!

Overall Review: As a quick fix, and the simple setup is very quick, this is a good solution to a dead spot or somewhere that is just out of range for your Wi-Fi network, for heavy bandwidth applications it may be a bit too much of a limiting device. I’ve just changed my home environment to a wireless ac setup and I did notice the effect of this device on the network as a whole. As to its design it is a bit out of step with EnGenius’s other wireless products i.e. it’s not a white hockey puck, but it is functional but not what I would call attractive. Overall 4 eggs, not for any real defects but just because it’s not WOW.

Did you find this review helpful?
Matt M.
Ownership: 1 week to 1 month

Pros: Simple to set up, even if you set it up manually. You just connect the ERB9250 to your PC via an Ethernet cable, then launch a web browser and follow the prompts. After that, you can move the device to a good spot that extends your range substantially. Easy to manage or check the status at any time, simply by logging into the device wirelessly using a web browser. From there you can tweak some of the more advanced settings or change the operating mode from a basic repeater to a client bridge. Supports WPS one touch setup for the less tech saavy folks out there. Also supports the latest wi-fi encryption technologies to keep your network safe from intruders. The client bridge mode is useful if you just want to connect one PC to your network that doesn't have a wi-fi expansion card installed. Does indeed extend your range by quite a bit, especially if you take the time to place it optimally. Has a low profile and a small footprint, so you can place it anywhere without it getting in your way. It even comes with everything you need to mount it to a wall if desired. Very affordable for those of us with a tight budget.

Cons: Doesn't support 802.11ac. Considering the cost of the ERB9250 this isn't a huge surprise, but I still would have liked to see support for the latest wi-fi standard as more and more devices are supporting it these days, including all the popular smartphones. Performance seems to take a bit of a nosedive compared to the transfer rates I see when connected directly to my router. It's not a substantial hit, but it's noticeable nonetheless. The manual doesn't clearly define what the various LED's on top of the device actually signify. This may confuse some folks. Speaking of the manual, it's really vague in general and doesn't detail what all the settings are used for. I think they could have done a better job with it.

Overall Review: I recommend this product to anyone looking to extend the range of their wi-fi at home with no hassles, provided of course that they don't have more than 5-10 devices that require internet access or require high throughput for streaming HD video and such. The performance issues, lack of 802.11ac support, and vague documentation are what keep me from giving this product a higher rating. That said, it's still a solid product in its class.

Pros: Attached the antennas, plugged it in, pressed the WPS button on the router, hit the WPS button on my ERB9250, and I'm off and running in less than five minutes! WLAN router on level below me in steel and block building. Use to receive one, sometimes two bars on my iPhone, I have all the signal I need now.

Cons: AT&t weezed on my (grandfathered) unlimited data plan, so I can't afford to lose wi-fi signal whilst I stream music all day. It's my tailwind in the workplace.

Overall Review: Thanks EnGenius, you solved my dilemma!

Overall Review: Real easy setup, if you have a router with a WPS button (looks like a "refresh" button on my Dlink). Just plugged it in, pushed the Dlink WPS button, pressed the ERB9250 button, and it linked just like the instructions said it would. Unplugged the ERB9250, moved it to a central location in the house (my router is way off on one side of the house), and we went from one bar (or less) on the far side of the house to full strength. Can even pick up the signal on the far corner of the yard now, and sit by the pool and watch Netflix on my laptop or Ipod. Also looked at the Hawking HWREN1, but at under $40 on promo at Newegg, this product is a steal.

Overall Review: I bought this to use as a Client Bridge and it is working very well. I'm streaming Netflix and mkv movies which are 1 - 2 Gb big over the network using a WD Live TV Plus, also purchased here at Newegg. Also used it to network another Directv HD box and have been playing the recorded shows from another DVR flawlessly. I'm very happy with this.

Cons: Documentation that accompanied the package was confusing and inadaquate.