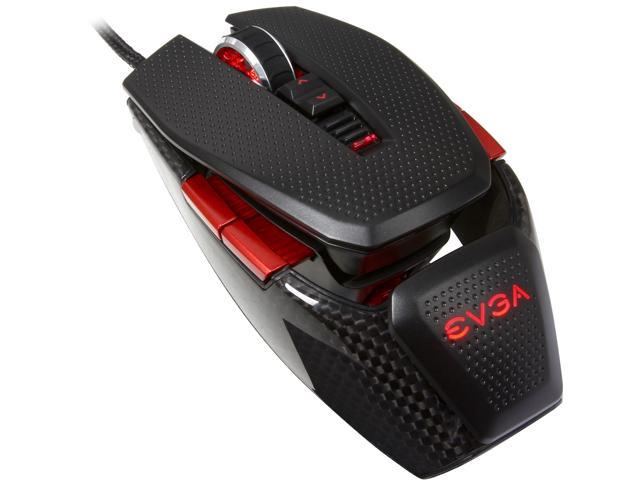 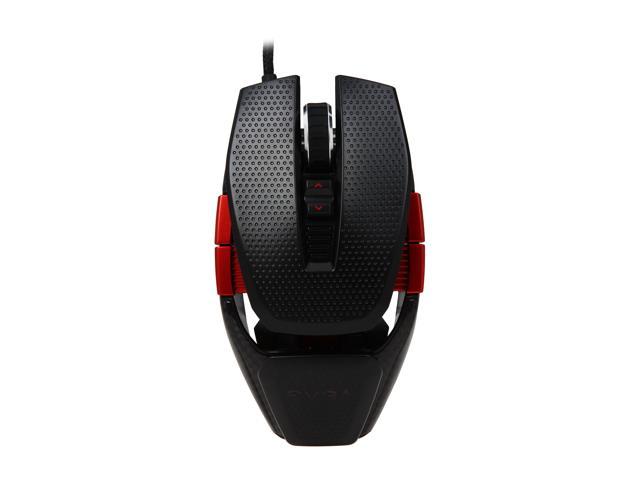 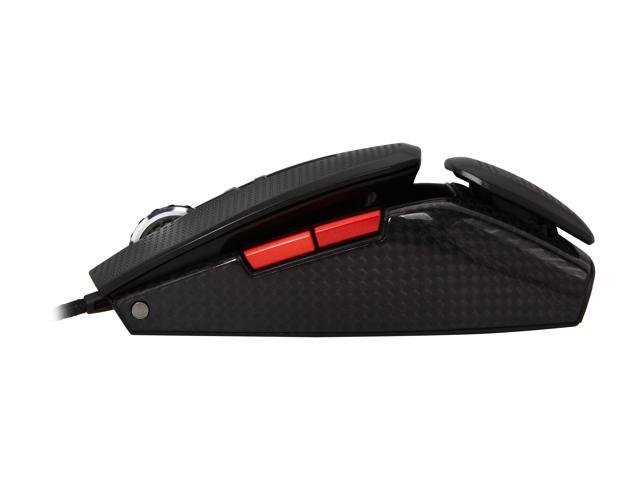 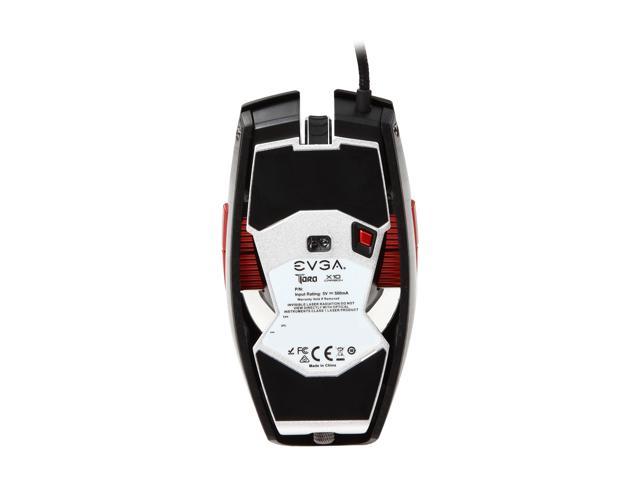 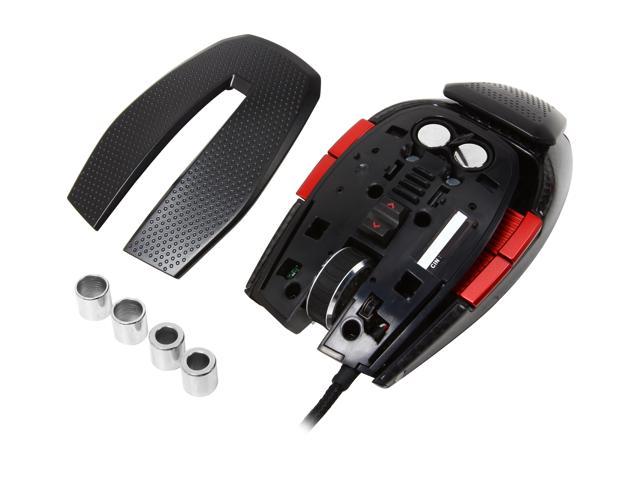 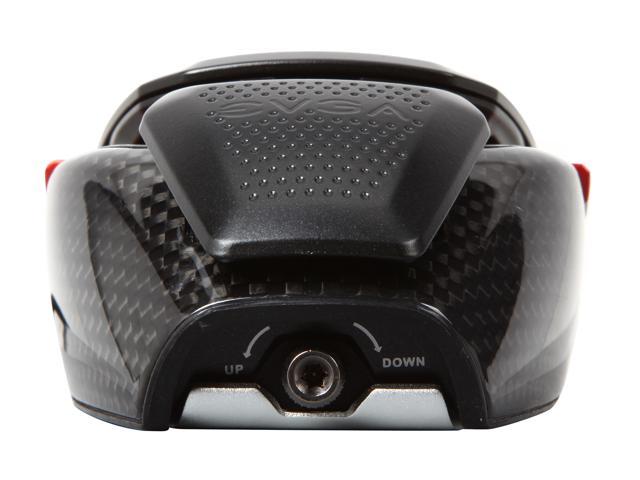 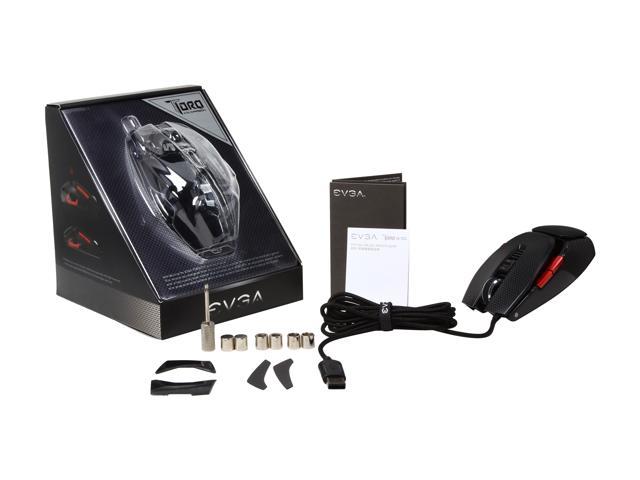 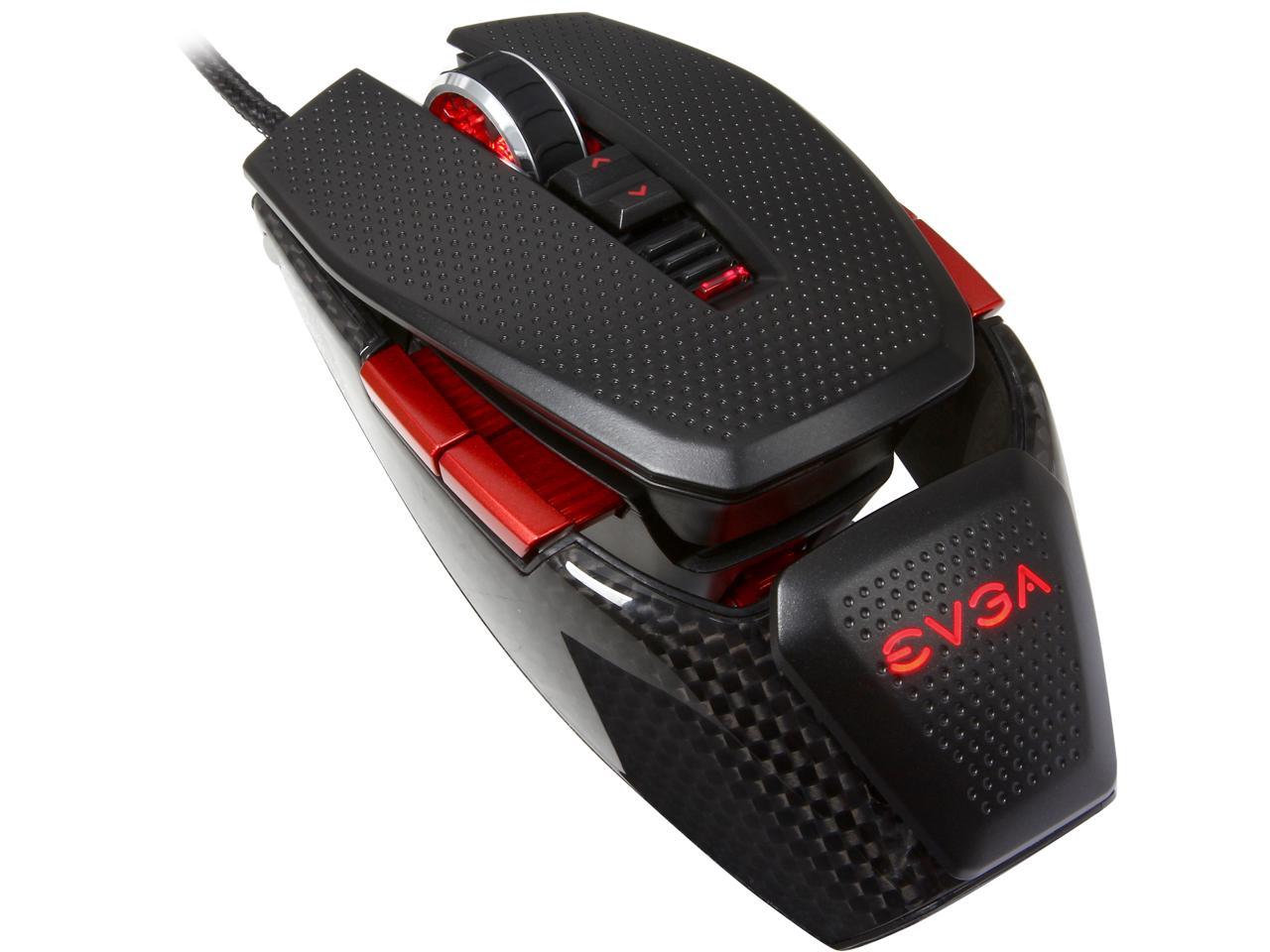 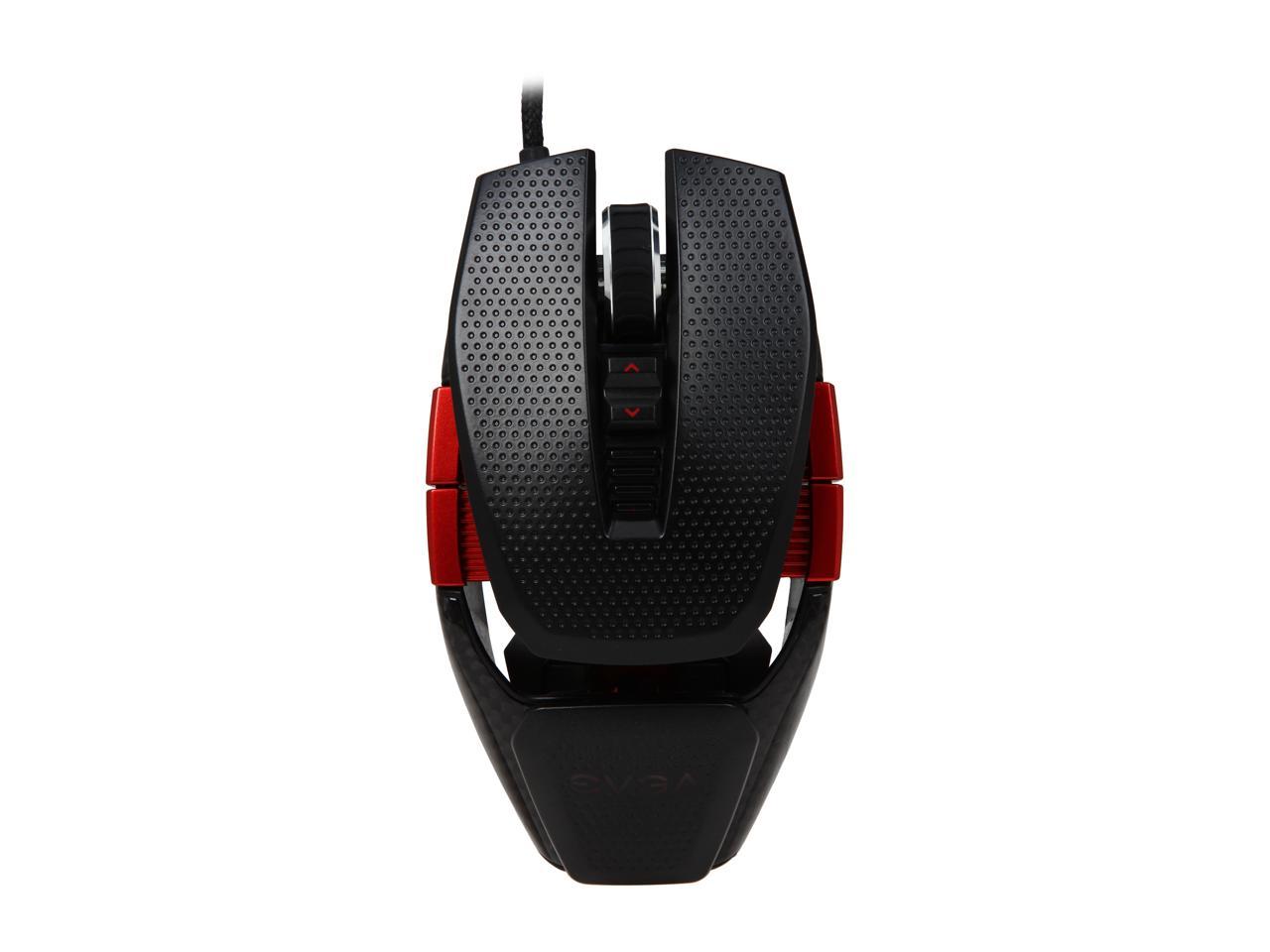 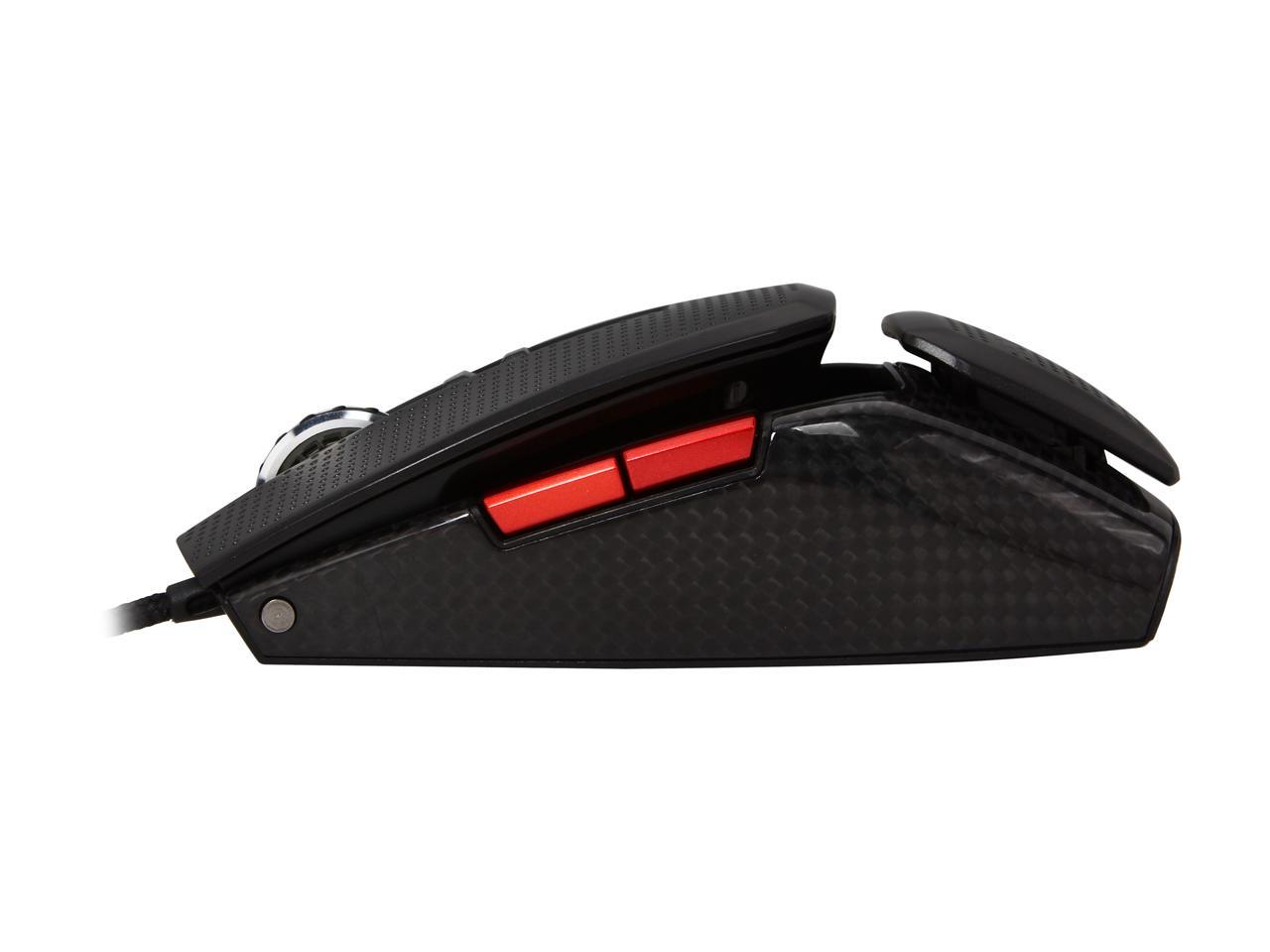 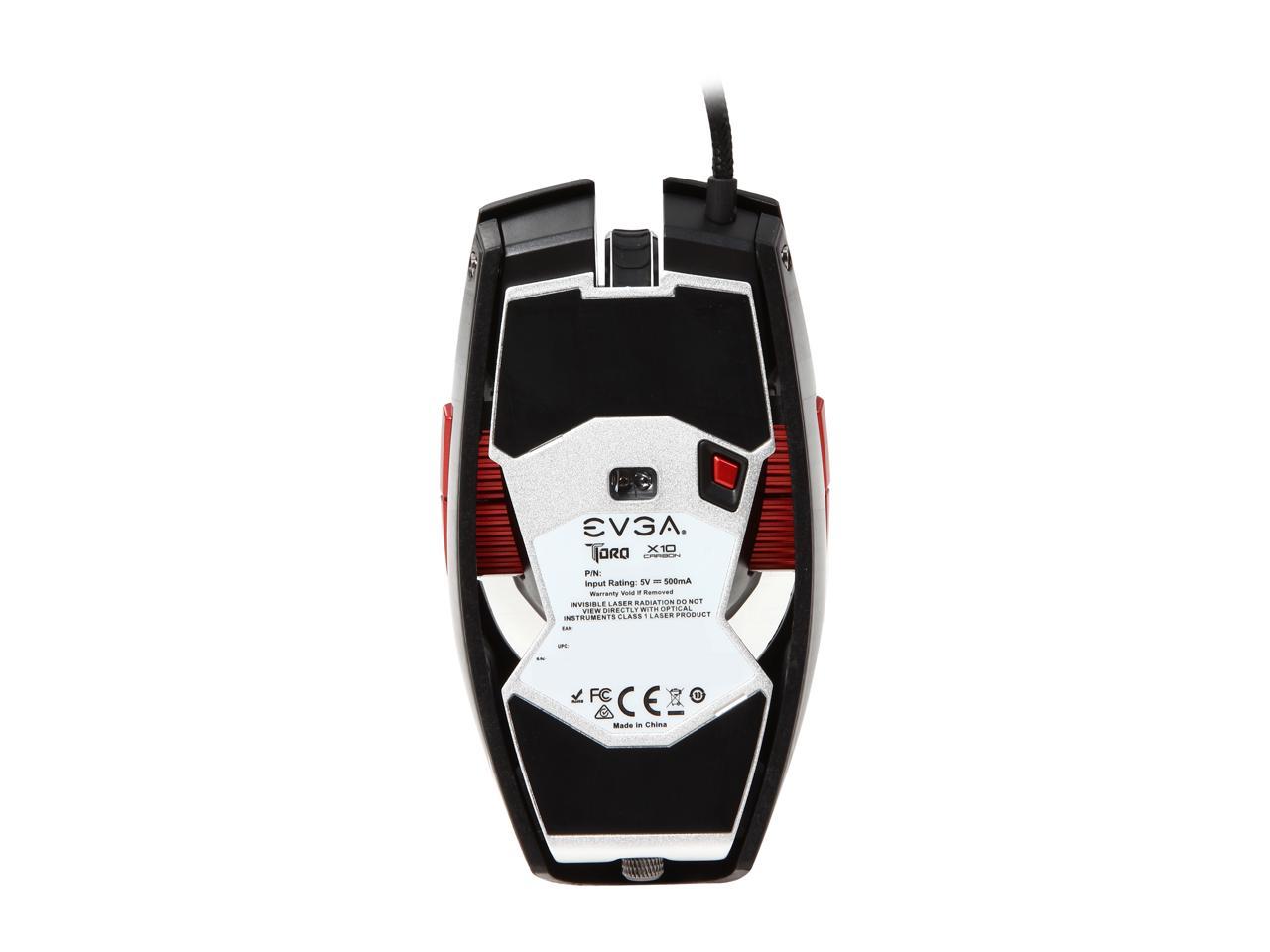 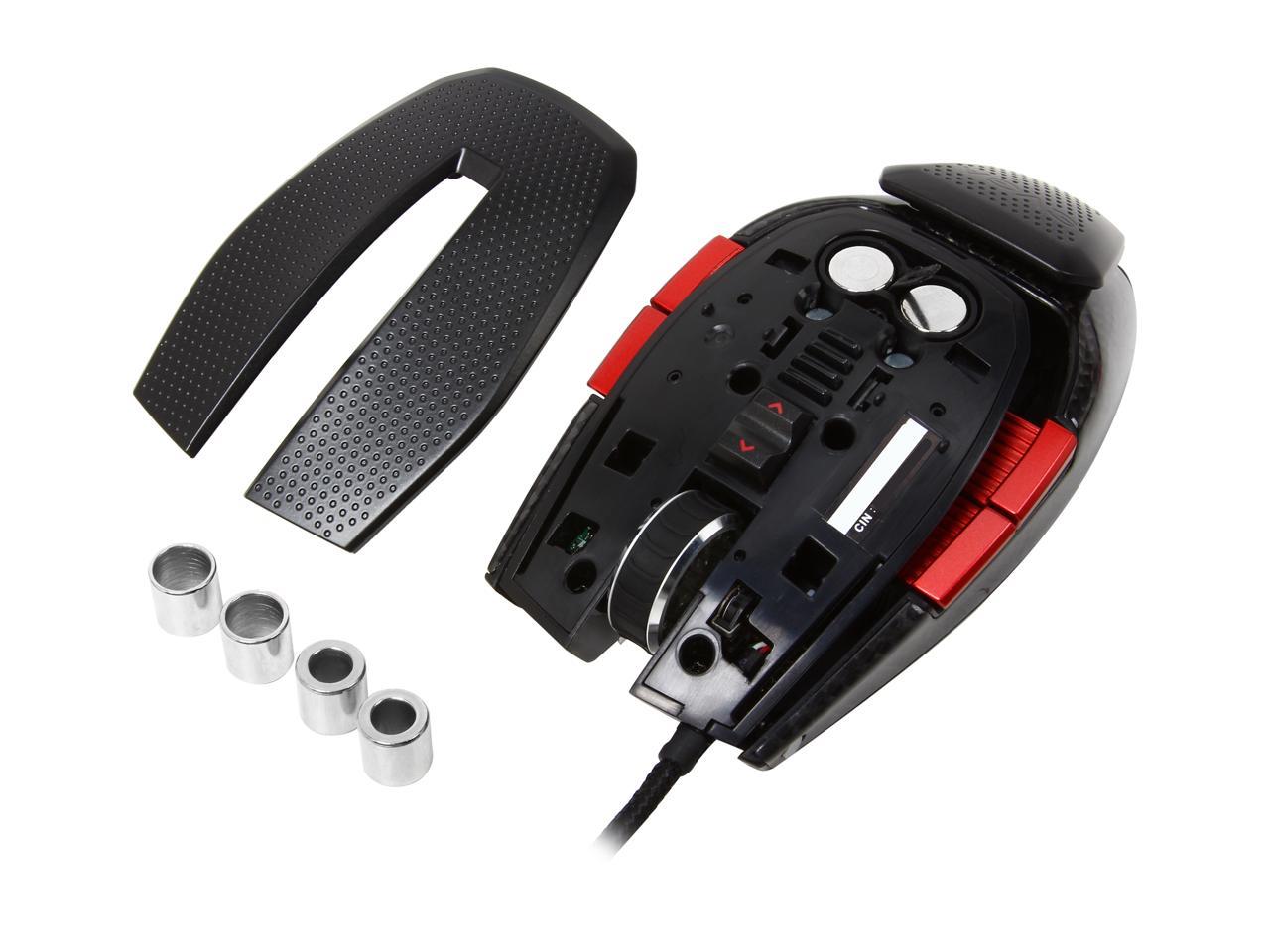 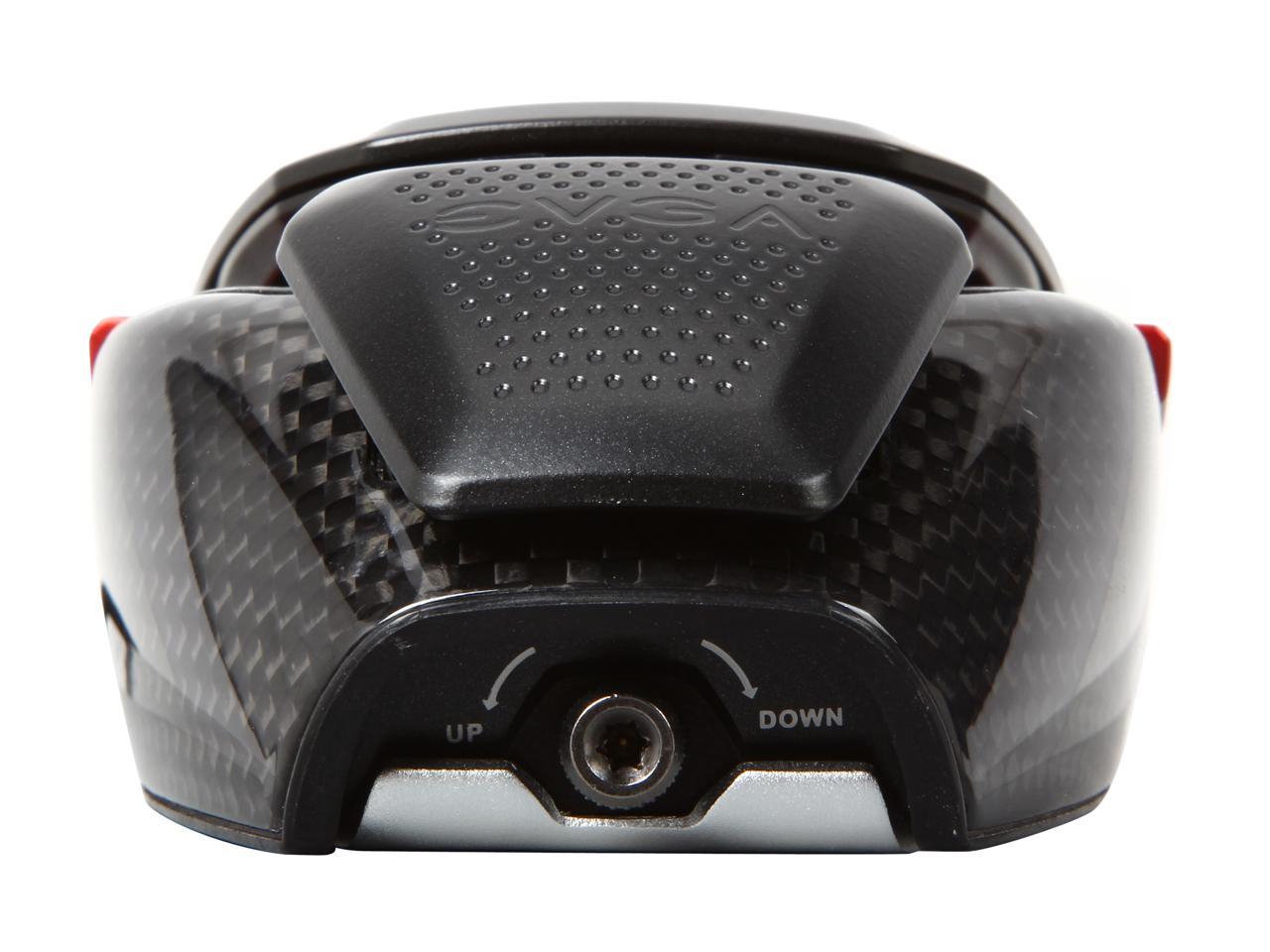 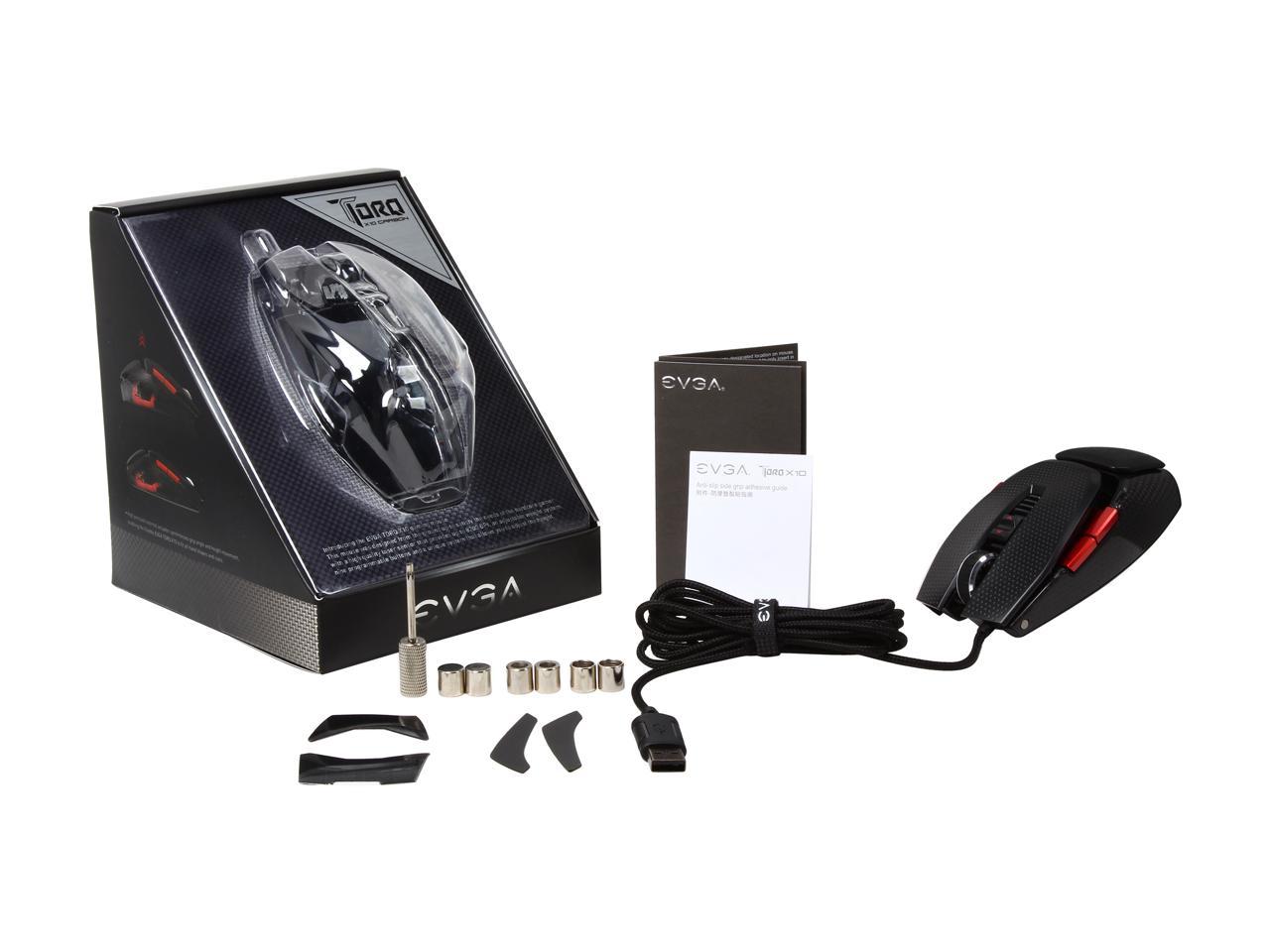 Introducing the EVGA TORQ X10 gaming mouse. Built with the highest quality materials including a real Carbon Fiber surface, this mouse was designed from the ground up to satisfy the needs of the hardcore gamer with a high quality laser sensor that provides up to 8200dpi, an adjustable weight system, nine programmable buttons and a unique sizing system that allows you to adjust the height of the body.

We didn't stop there though. The EVGA TORQ X10 features the highest quality Omron switches with a lifespan of over 20 million clicks. We also included a full metal base that provides solid construction, the latest Avago 9800 laser sensor providing up to 8200dpi with 1000Hz polling rate, a 6FT silver coated USB cable, and much more. Designed for the gaming enthusiast and featuring a Real Carbon Fiber surface. In addition to customizable size, weight, and buttons, the EVGA TORQ X10 also has a customizable RGB LED. Two separate LEDs can be adjusted to Red, Green, Blue, Orange and more! The EVGA TORQ X10 gaming mouse comes complete with a full software package that allows complete control over the mouse. Customize the color, button settings, dpi, and profiles. The EVGA Unleash software also has an OSD (On Screen Display) that makes it easy to see what profile or dpi setting you are using!

Awards For the EVGA TORQ X10

Pros: Wow, I like it more than my Razer Taipan and got it for half as much. It has adjustable everything and feels great in my hand. It's about the same size as my Taipan but maybe a little wider, and much heavier with the weights in. If you can catch it on sale (i got it for $42 delivered), definitely do it.

Cons: Been using for about a week and no complaints at all. The instructions for opening the mouse and adding/removing weights were slightly confusing, but i'm guessing it was more because i was stoned than an issue with the instructions. either way, really small complaint there.

Pros: Great aesthetics, and the adjustable LED means you don't have to worry too much about matching with your other peripherals/build. Great features for the price. Adjustable height is a nifty feature, and there's plenty of adjustable weights. The scroll wheel has the right amount of tension on it for FPS games, and doesn't feel too looses or tight. Adjustable DPS on the fly is nice, but I never really use it. Click buttons have good tension at the tips, but...

Cons: One crippling flaw (at least for me) is ergonomics. I have rather small hands (just shy of 7 inches from base of wrist to tip of middle finger), and because of the way the base of the mouse is tapered, my wrist has to sit pretty far back for me to grip the mouse (I use a claw grip, but I don't see how a palm grip would benefit from this). Even at the lowest height setting, my fingers are far back enough that a lot of tension is required to click, and I have to use my fingertip to scroll the wheel. I have no such problems with Logitech Mice or the Corsair M60 I'm currently using.

Overall Review: The mouse also isn't particularly comfortable to hold, as it's an ambidextrous mouse. It's not BAD, but in terms of comfort just feels like any old mouse.

Pros: Precision, feel, handling is like a Porsche! Accuracy and click response is very good. I love to foot pads and the weight is perfect. All marking and labels are still lik new and showing no signs of wear.

Cons: As of now (March 2015), almost 7 months later it is double clicking with the left button. There is new update software available so I hope this corrects this issue. For me it is just a little too small for my hands, but nothing I cannot live with.

Overall Review: I love the carbon fiber look and the design is great.

Pros: Accurate, quality materials, laser, high DPI for a low(er) price, looks epic, weighty. I could keep going, but I'll jump into the more prominent points of my experience instead. I use it on the arm of a chair, as I can't fit a desk in my place. It works extremely well, especially for the price range (good luck finding a 9k~ DPI mouse of any real quality for this price range). This is NOT a case of 'you get what you pay for'; you're getting a $100+ quality gaming mouse - for $65. The weight of it makes it pleasant to use, and the stainless steel bottom plate being extremely smooth has it gliding regardless of what's under it. As for quality....it's fallen off the arm of my chair a number of times, several hitting the hard edge of a solid wooden table pretty hard (hard enough to crack the plastic of other items, which was the death of one of my mice). Worst that's happened is a few threatened heart attacks, burnt ears, and the top cover has popped off. Two seconds has the top cover back on with all being right in the world once more. This has gone on for over 5 months now, and there still isn't so much as a scratch on the covering, or any sort of wear on the top plate's tabs. It takes very little movement to register a mouse click or wheel scroll. I haven't been kind to this mouse with how often I click it - several of the games I play tend to require a little under 20 clicks per second (halfassed guesstimate of an average) for extended periods. After owning a few other gaming mice, they've usually had some sort of difference in either feel or accuracy by now. One burned out after 4 months of use. No difference here. Still as fresh as when I took it from its crib. Afterthought - the braided wire holds up pretty well to encounters with a floor cleaner. No fraying or breakage. Pretty sure I should feel bad for knowing this.

Cons: The directions aren't clear on how to work this mouse. Even looking at them closely it took a bit to figure out that the top cover does NOT lift as they seem to imply. You push it forward from the back, it slides a little and pops loose, then you lift it off (reverse gets it securely in place again). Minor, but was a bit annoying given that I was unnecessarily fearful of breaking this thing - seriously, this isn't plastic. Beyond that the directions aren't even needed. Two of the LED colors are a little off in color. The selection is red, green, blue, what I take as yellowish green or light green, and what I take as a yellowish orange..honey-ish color. I believe it's because these two colors are using multiple LEDs to achieve the tone. Not something I care about really since I stick with red, blue and green, but I'm sure someone would use such a menial point as a deal breaker. Wired, but hey, it says it in the specifications. Duh. At 6ft long with a solid braid - I don't really care.

Overall Review: I found two of the 'extra features' of this a little pointless since the quality of the mouse renders them that. The pads they provide for the bottom plate to make it slide easier are just...pointless. It does just fine without. The weights make very little difference. Sure some might nitpick a few grams' difference. Me? I tossed in the heaviest and left it at that. Feels good and weighty either way, without being a hindrance. To try and better portray the general weight - heavy enough to feel quality, light enough to be very easy to maneuver. It was a little odd to get used to the DPI adjustment switch being -right- at the base of the wheel. Namely because it's pretty sensitive (like all of the other switches on this mouse). Not a bad thing mind you, just took some trial, error, and wondering why my gun sights suddenly became sluggish in the middle of a fight. Now that I'm used to it the placement and sensitivity is awesome for response times. Which yes, if you switch between multiple applications, you will likely be changing the DPI. Just a final thought - the mouse wheel's texture had me concerned when I first saw it. Looks like a deep treaded 4 wheeler tire. It's not quite as prominent as it looks, and they help with the tactile sense of just how much the wheel has moved. Plus the wheel itself is metal, so it is not at all hard to feel when it's moved a notch (I've found mice with excess rubber dampen that).

Pros: please see my previous review. Positive addendum: There is a free program called XMouseControl Mirror which allows one to unleash the whole potential of this mouse. Downloaded from: http://www.highrez.co.uk/downloads/ Kudos to Phil! I am raising my rating to four eggs. One is subtracted for many hours lost.

Manufacturer Response:
Dear Elzbieta P., Thank you for your updated review on the EVGA Torq X10 mouse. We do greatly appreciate you positive review of our product. If you have found a different software that works well for you, then that is great news. I can assure you that we take all feedback into account, and we will be forwarding this information to our Product Management team for review. I can assure you that our Unleash software does allow for programmable mouse buttons from within the software we provide. We would like to thank you again and if you should you have any further feedback or suggestions, please feel free to contact our Technical Support team by phone 1.888.881.3842 and pressing option 1 or by email: Newegg@EVGA.com Sincerely, EVGA Customer Support
Anonymous
Verified Owner
Superb mouse1/19/2017 8:36:49 PM

Pros: Excellent performance. Great customization through software and physical comfort options. Great build quality and overall design. Crafted by EVGA so you get an excellent warranty. Software is easy to use.

Cons: A little on the heavier side even without the weights in it.

Overall Review: Overall this mouse is excellent. I am completely happy with my purchase and definitely recommend this mouse to anyone that is looking for a solid laser gaming mouse to add to their system.

Overall Review: Upgraded from the Steelseries Sensei. Big time Battlefield guy, but play a whole variety of games other than FPS. Also use this mouse with Office in a lower sensitivity as it has a rocker sensitivity adjustment button on the top. And have weighted mine down as heavy as it will go. The feet pads are great and replaceable. Basically, I really like this mouse.