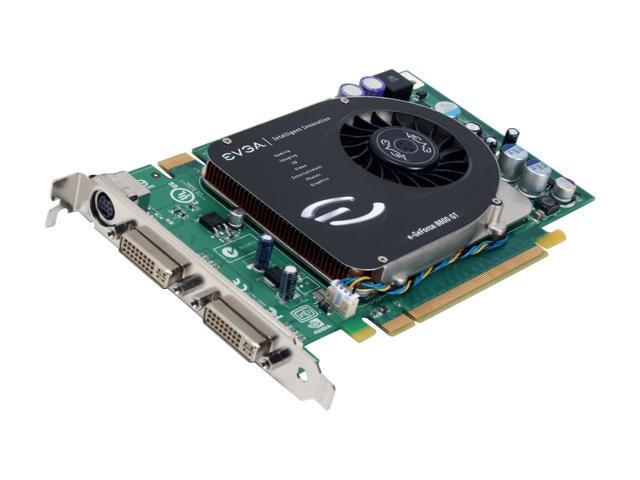 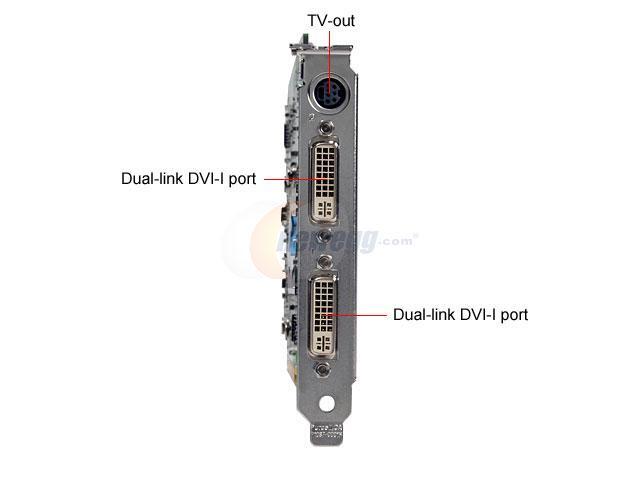 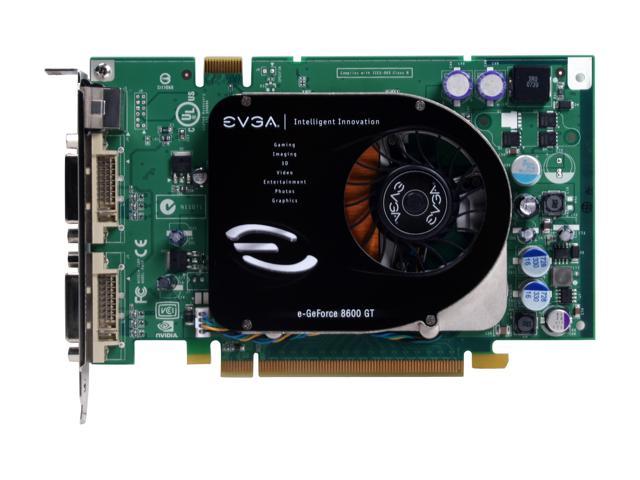 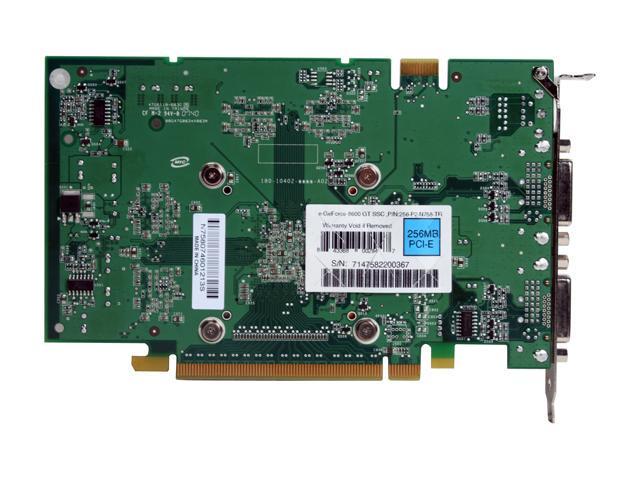 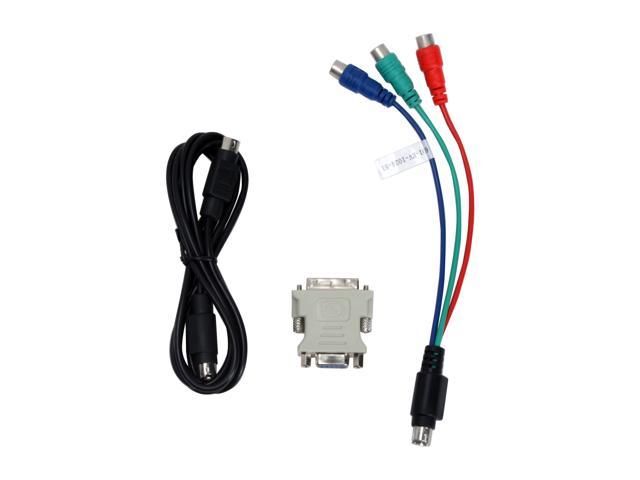 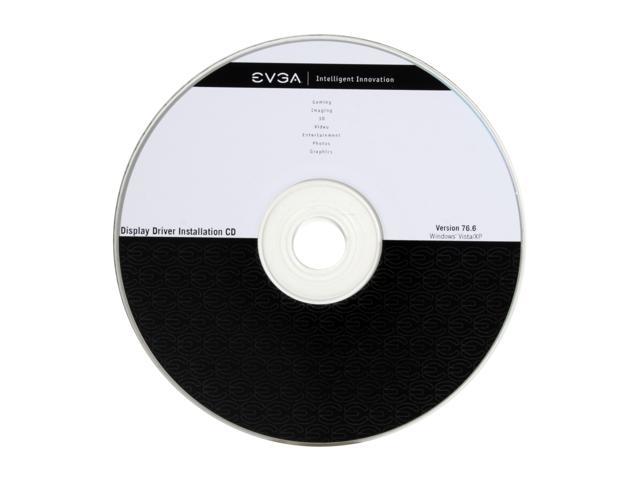 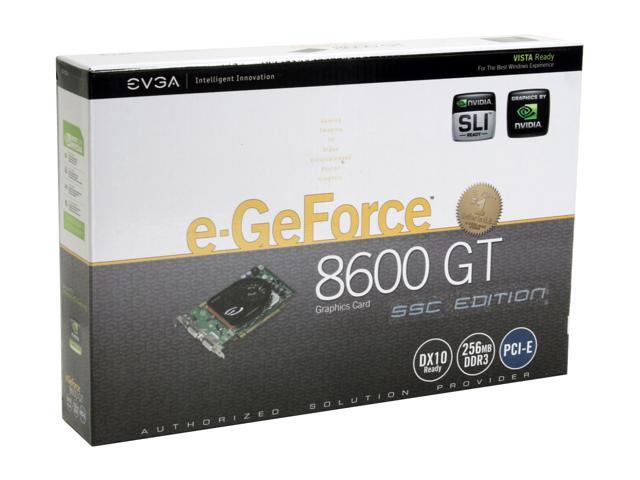 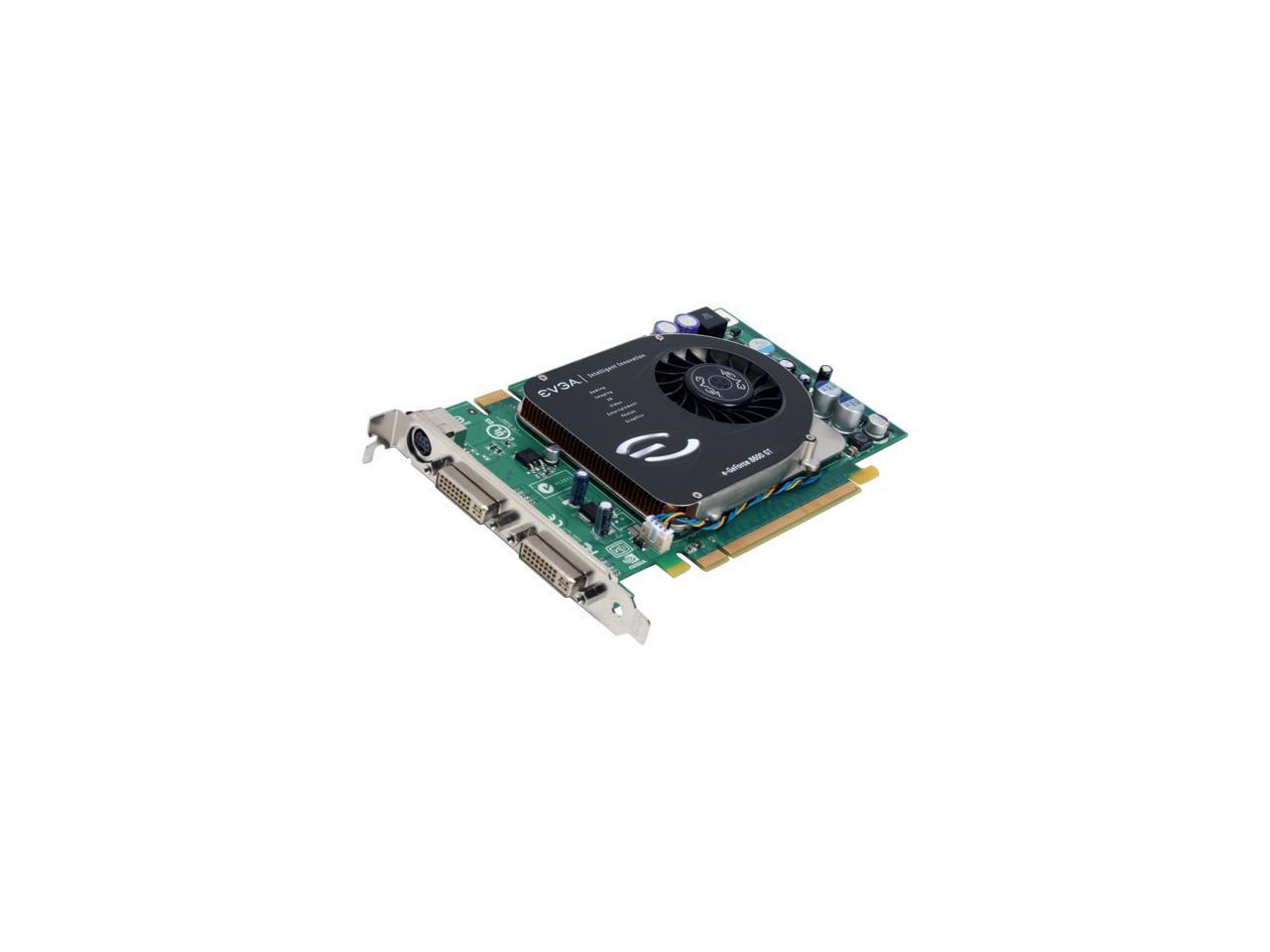 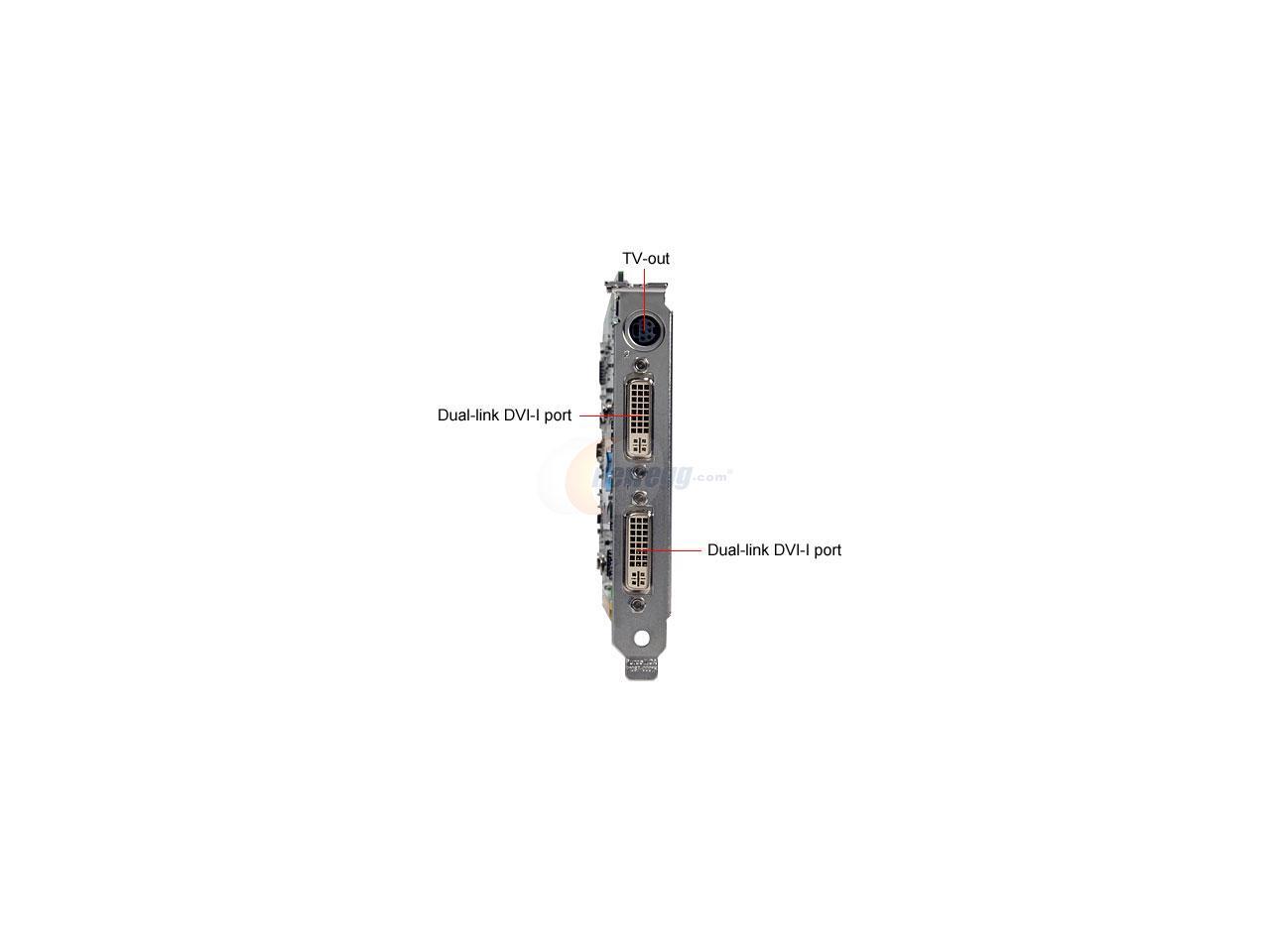 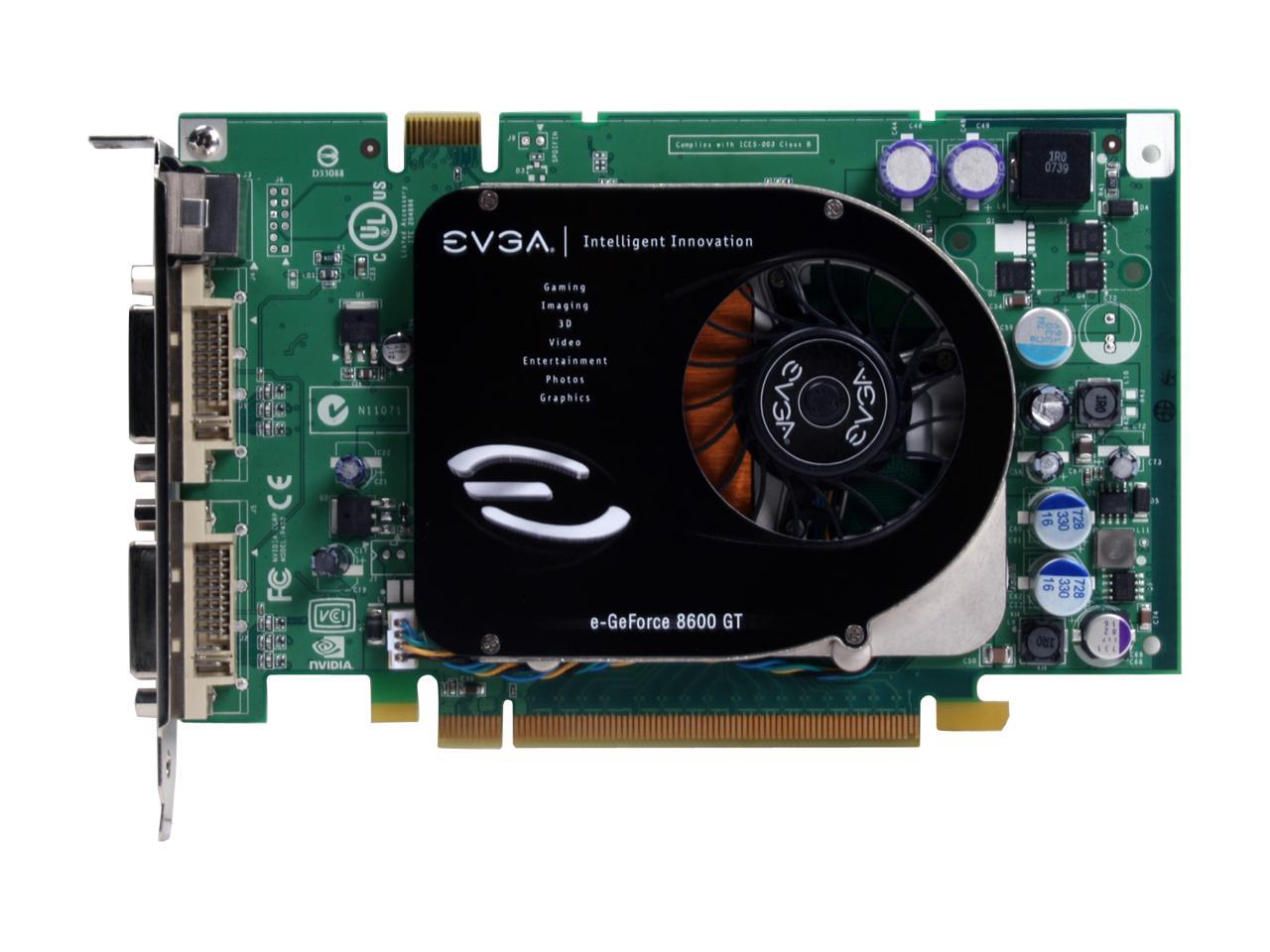 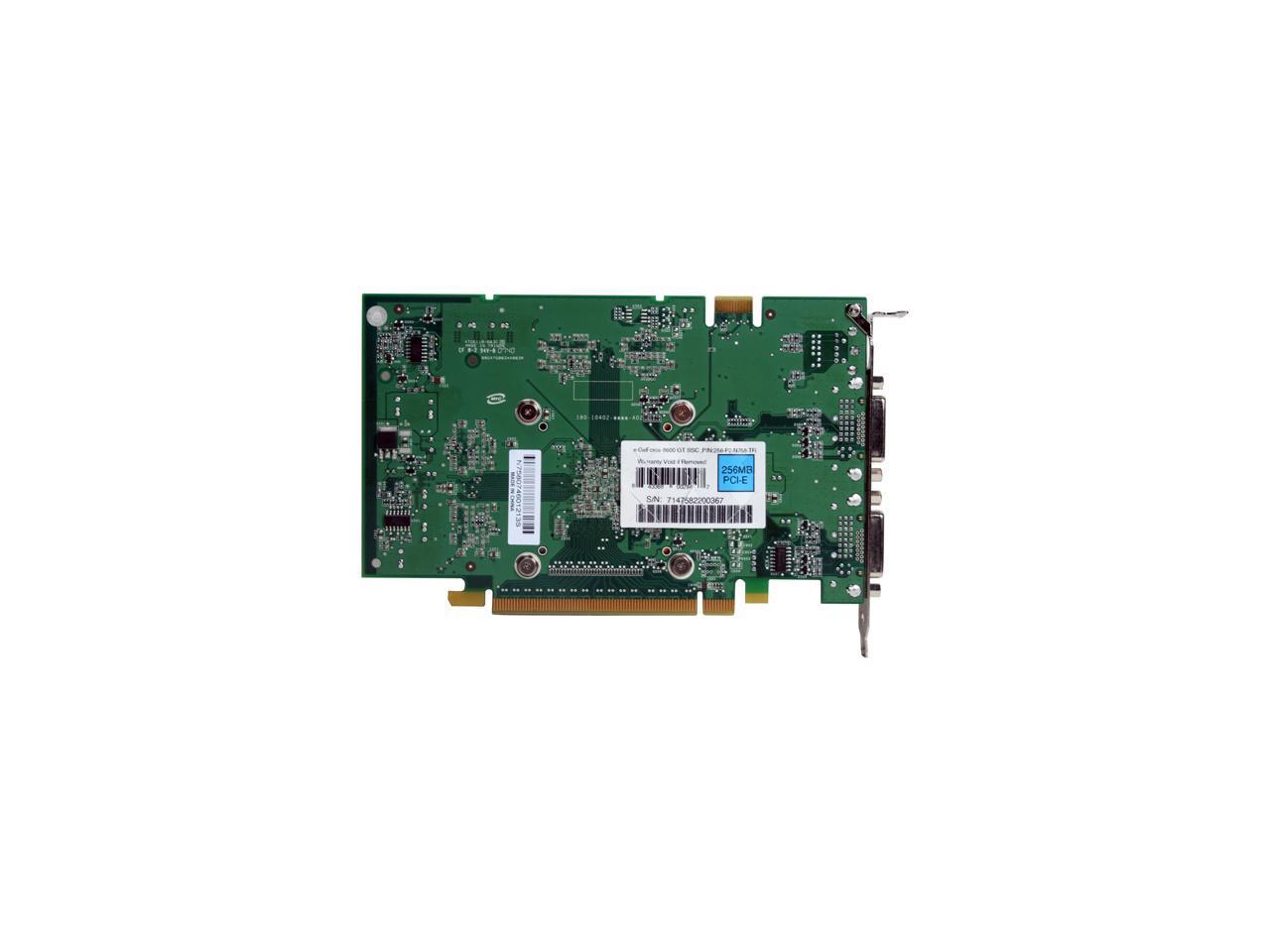 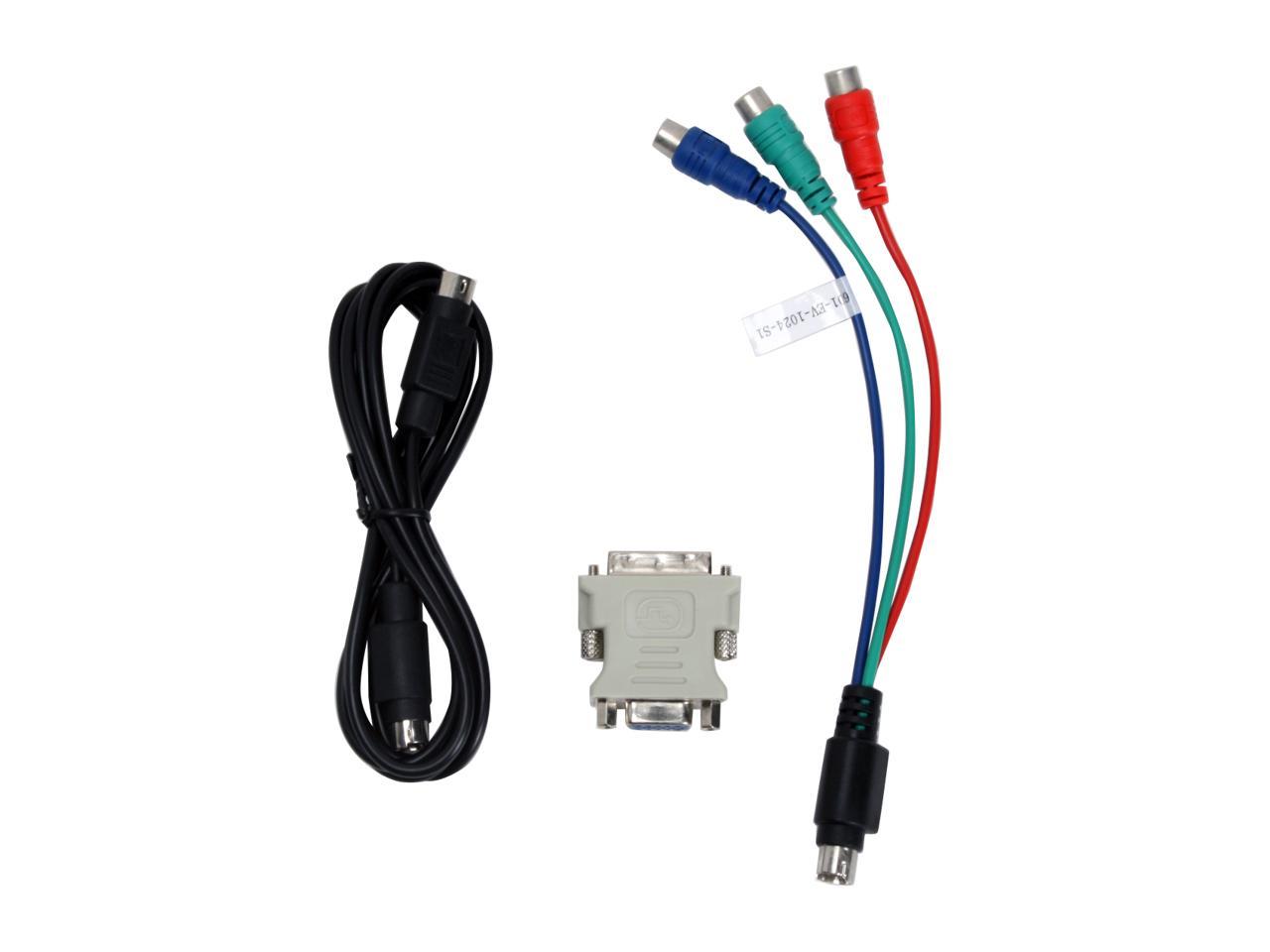 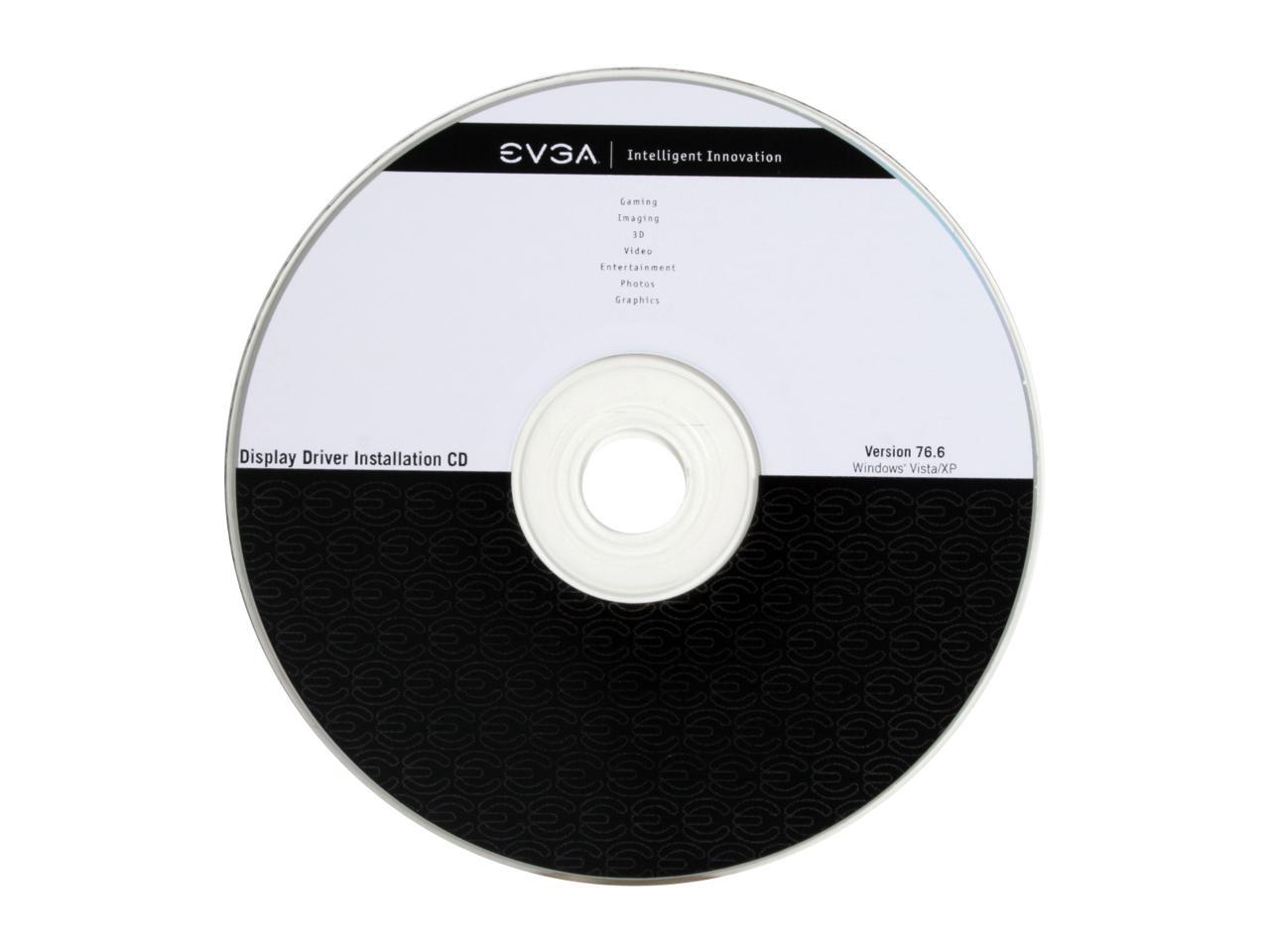 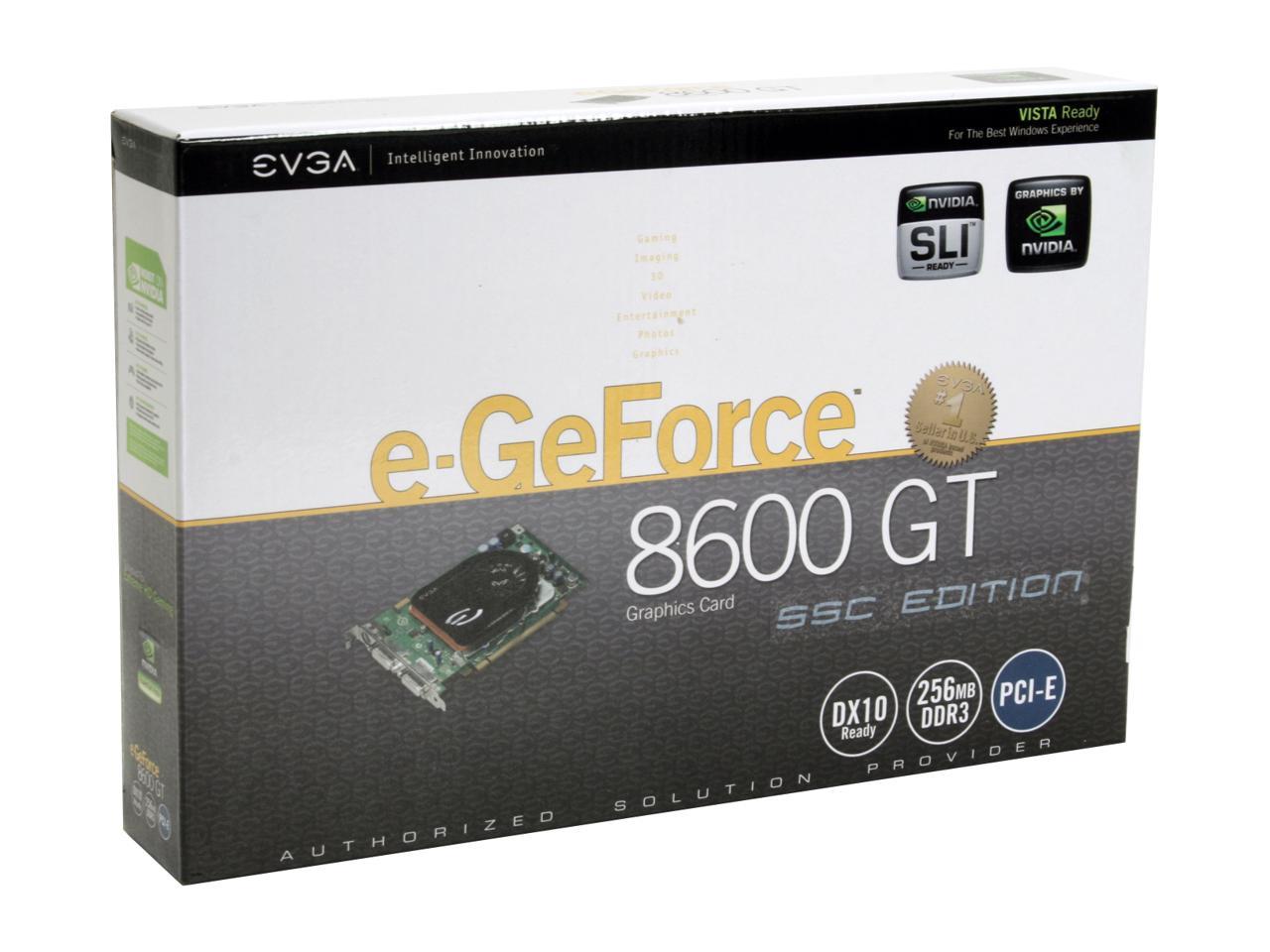 (51) Write a Review
OUT OF STOCK.
Overview
Specs
Reviews
The GeForce 8 series offers a complete family of graphic cards ready to meet the unique needs of their users. The series features a unified DirectX 10 Shader Model 4.0 & Open GL 2.0 architecture to produce stunning 3-dimensional graphics and textures. With 10-bit per channel output, the 8 series produces higher fidelity color and separation. The cards support SLI and NVIDIA's PureVideo HD.
The 8600GT offers affordable faster video processing and higher resolution rendering. It processes video data with 32 stream processors fed by 256MB of 128-bit double-pumping GDDR3 SDRAM running at 1620MHz to deliver 2560 x 1600 resolution. The core clock runs at 684Mhz and the 400MHz RAMDAC lets you use a pair of monitors for increased workflow, or wide-screen gaming.
Video can be streamed via S-Video, Composite or HDTV outputs. An onboard fan aids board cooling and case airflow so you're ready to go right out of the box. Choose the NVIDIA GeForce 8600GT card to bring best-in-class graphic performance and flexible video output at a middle-of-the-road price.

Overall Review: Installed in my Gateway GT5252 with the latest driver from EVGA site.As per EVGA tech support upgraded the stock 300W power supply to 500W,to be in the safe side,card needs 18 amps minimum at +12V.

Pros: Is exactly what I expected. I didn't expect 8800 performance. If your expectations are simply to run games at medium to moderately high settings, this is a good card for you. Was a cinch to install. slapped it in there , fired up the comp installed some drivers and gaming in 20 minutes . I am actually running it on my girlfriends comp at the moment...waiting for the rest of my components to start my first build , will be then reposessing this from her. Gave her athlon X2 3600 an extra 3000 on 3dmark. Probably couild have gotten higher with the cpu I will be using...will update post after build completes.

Overall Review: good budget card. If you are a gamer and dont need bleeding edge graphics...this isn't bad at all!

Cons: Old drivers included. But it is not their fault, just download latest reference drivers from Nvidia website.

Overall Review: Begginer computer builders rejoyce. This could be a good choice for your new rig.

Pros: I love this, So far anygame i throw at it can be ran in max settings. Medal of honor: Airborne, was the reason i bought this, and built my new PC.

Cons: There is none that i can think of...

Overall Review: I recommend this card, it wasnt all to expensive either.

Pros: GREAT CARD!! It smokes at this price-point and I had no problem installing it into the machine. Obviously runs better than my 7600GT (also EVGA) and I look forward to SLI'ing it for even more performance on the mid to upper end games. The lifetime guarrantee is also reassuring. The card came on time in the mail - thank you Newegg.

Cons: The rebate company EVGA uses. Card came with a $25 mail-in rebate offer and I'm one of those buyers that actually sends in the rebate. The company sent me an email a month later saying my rebate was invalid due to being out of the mail-in date range. After sending them a reply stating that I sent it directly from the US Post Office (I watched them post mark it) and who I should have the US Post Office contact for an investigation, they replied saying I'm a valued customer and they have corrected the situation. I hate having to argue with these companies.

Overall Review: Third party rebate companies are always looking for ways to save a buck and are probably not as organized as we'd like them to be. I can't blame EVGA for the third party's screw up but as a consumer, the only way I can effectively voice my displeasure over the experience is to not buy EVGA for the next card. I will go back, but money talks to companies and they won't get mine next time. Please do quality control of your third party companies, EVGA. Other than the rebate experience, I would have given the product a 5 rating.

Pros: No additional power plug needed. pop it in and go. The card comes pre overclocked and runs cool as well. If you can't afford an 8800 ultra then this is the right solution. Play all the newest games and save money as well. I play crysis, hellgate london, Bioshock with no problems whatsoever.

Cons: One of my computers does not have sli so it can only use one. Download newest drivers from nvidia website before installing just to save time.

Overall Review: rarely do I give praise without some cons, but this card is all pro. as always, newegg shipped fast and had great service.

Pros: Yes it is very quite and i'm not just saying that. The 8600 GT does what it is suppose to do at all times. i'm glad i have one now the Frame rates are good and so is the price. Their is really do need to get a 8800 GTX or GTS right now when all the other games don't even support that much computing for gaming seriously.

Cons: No problem with it at all yet?

Overall Review: Evga keep up the good work and i have to thank newegg.com for giving me the product right on time.

Cons: at his price range, nothing.

Overall Review: this is a very good card at this price range, you get gts speed at gt price