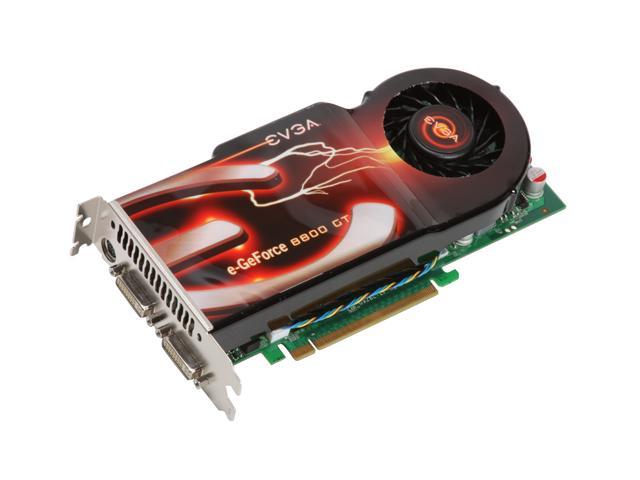 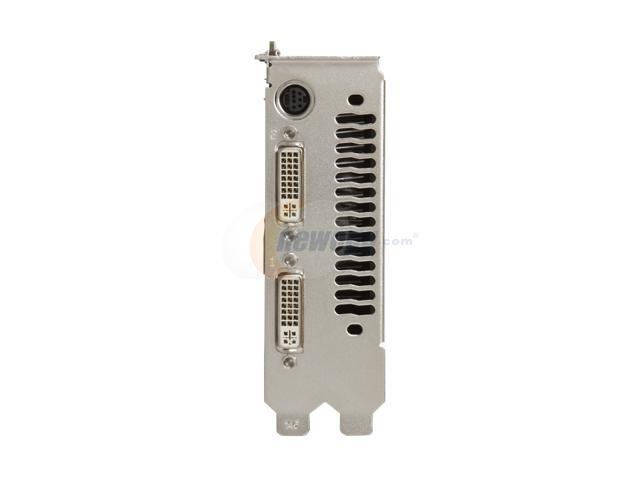 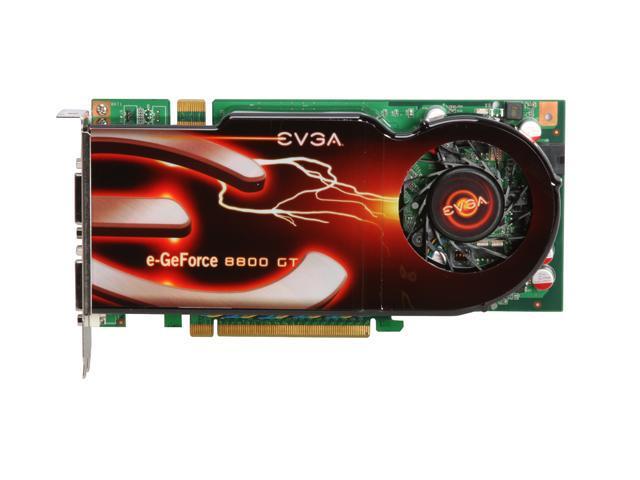 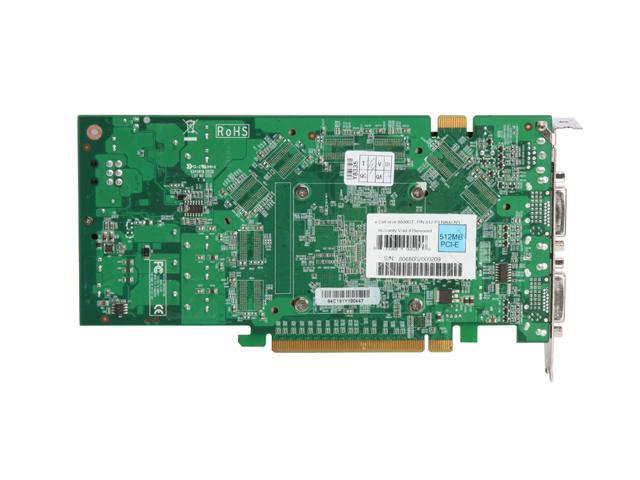 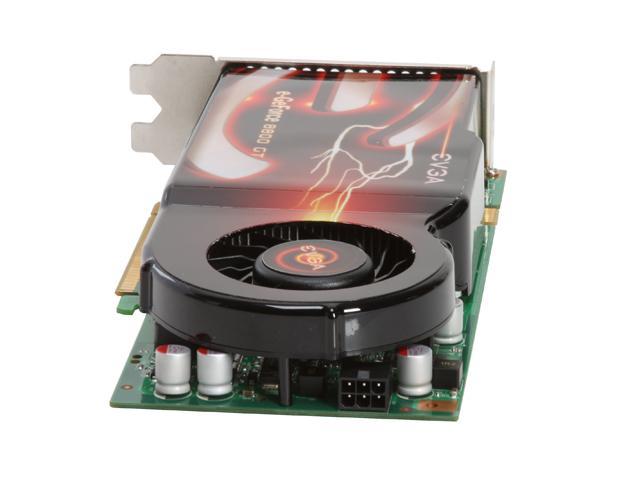 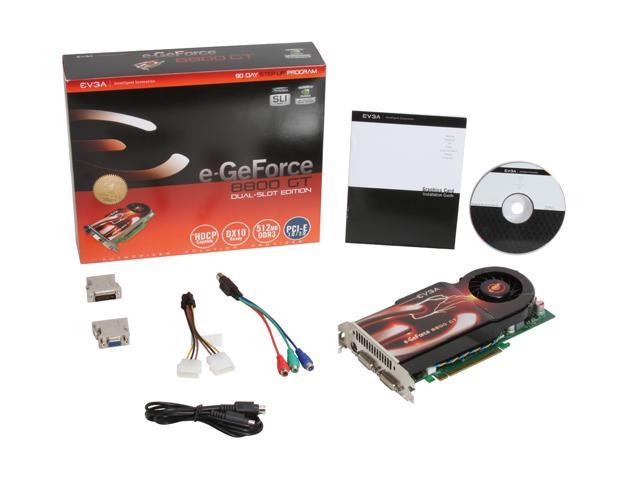 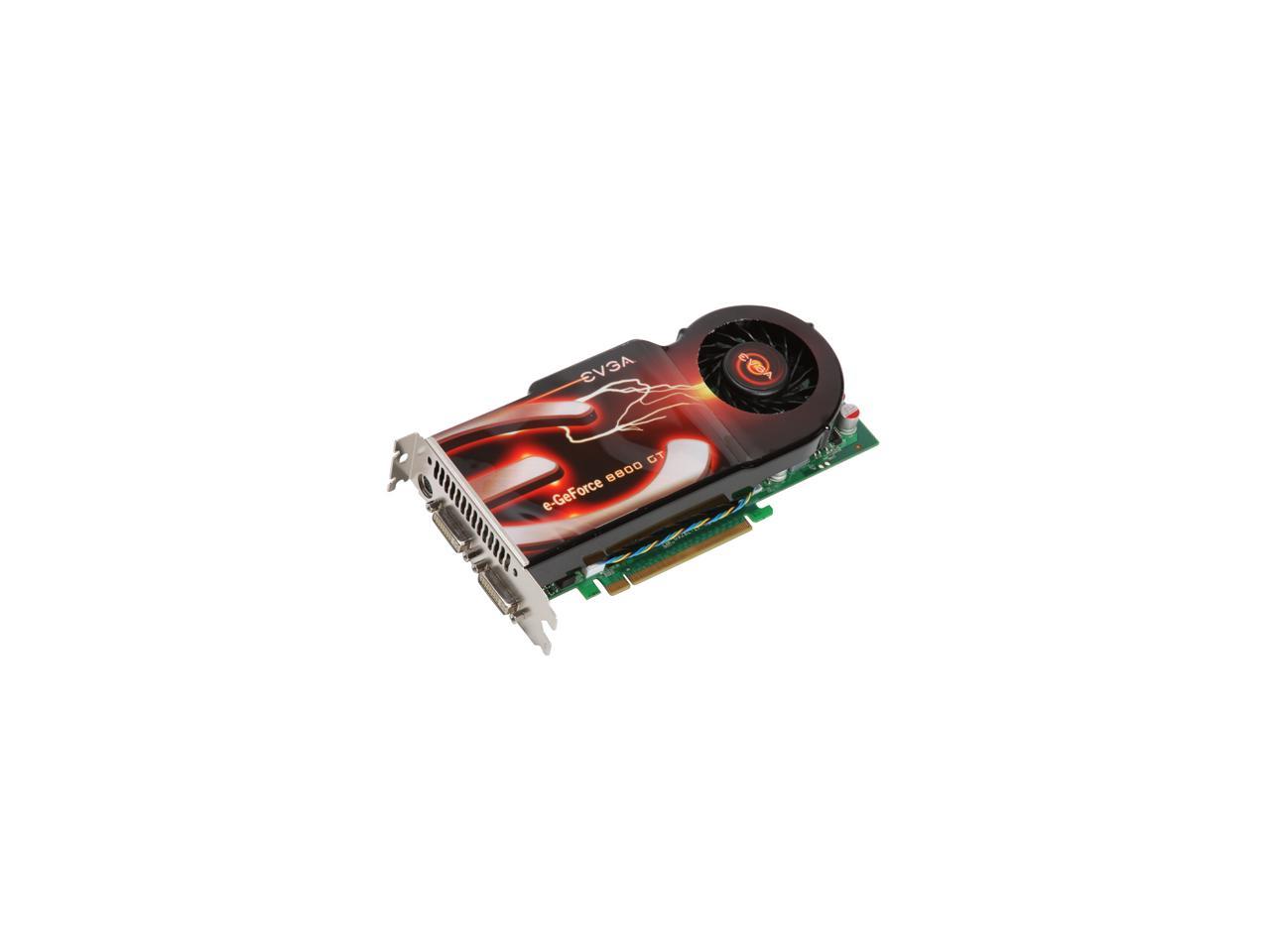 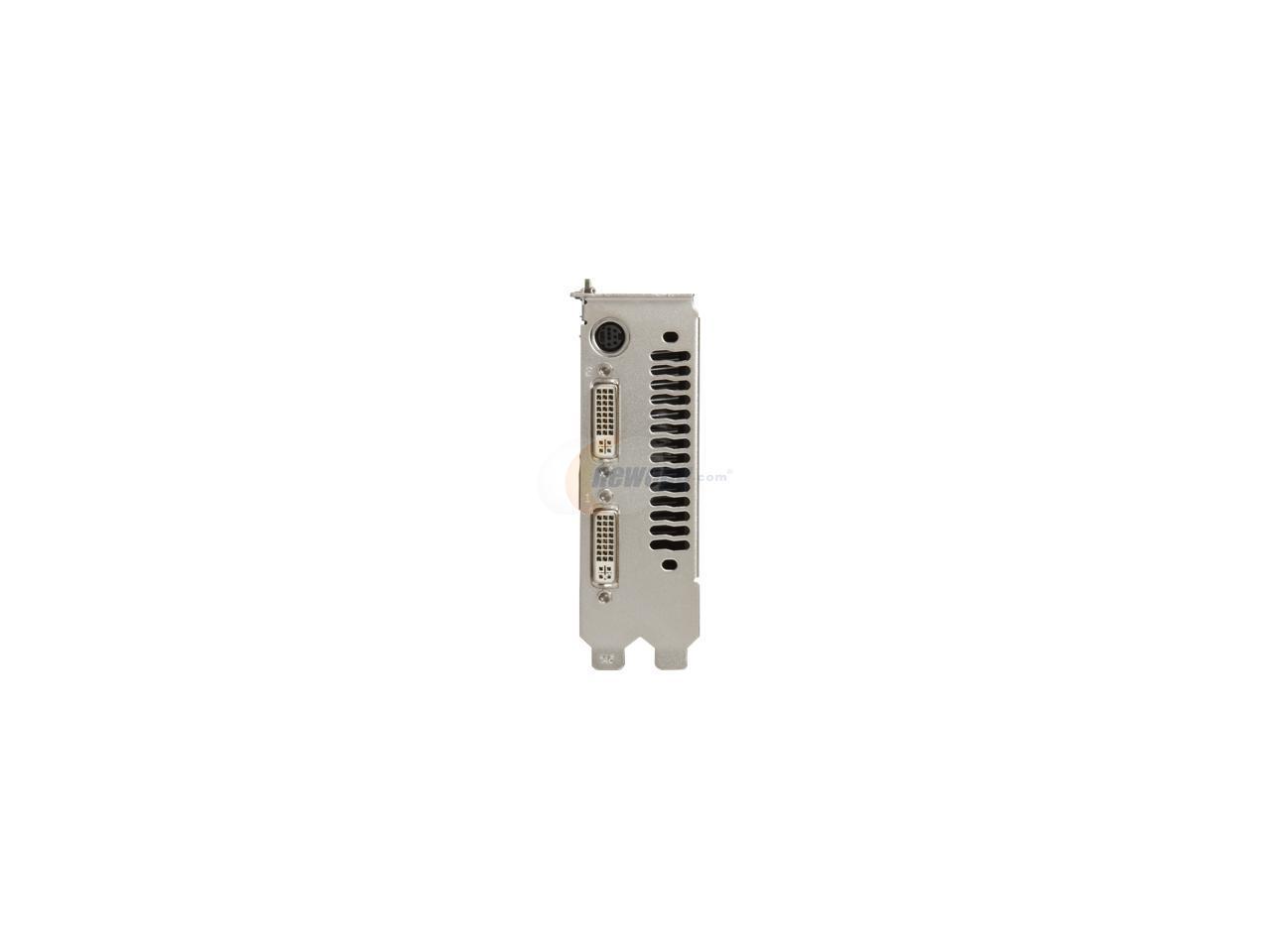 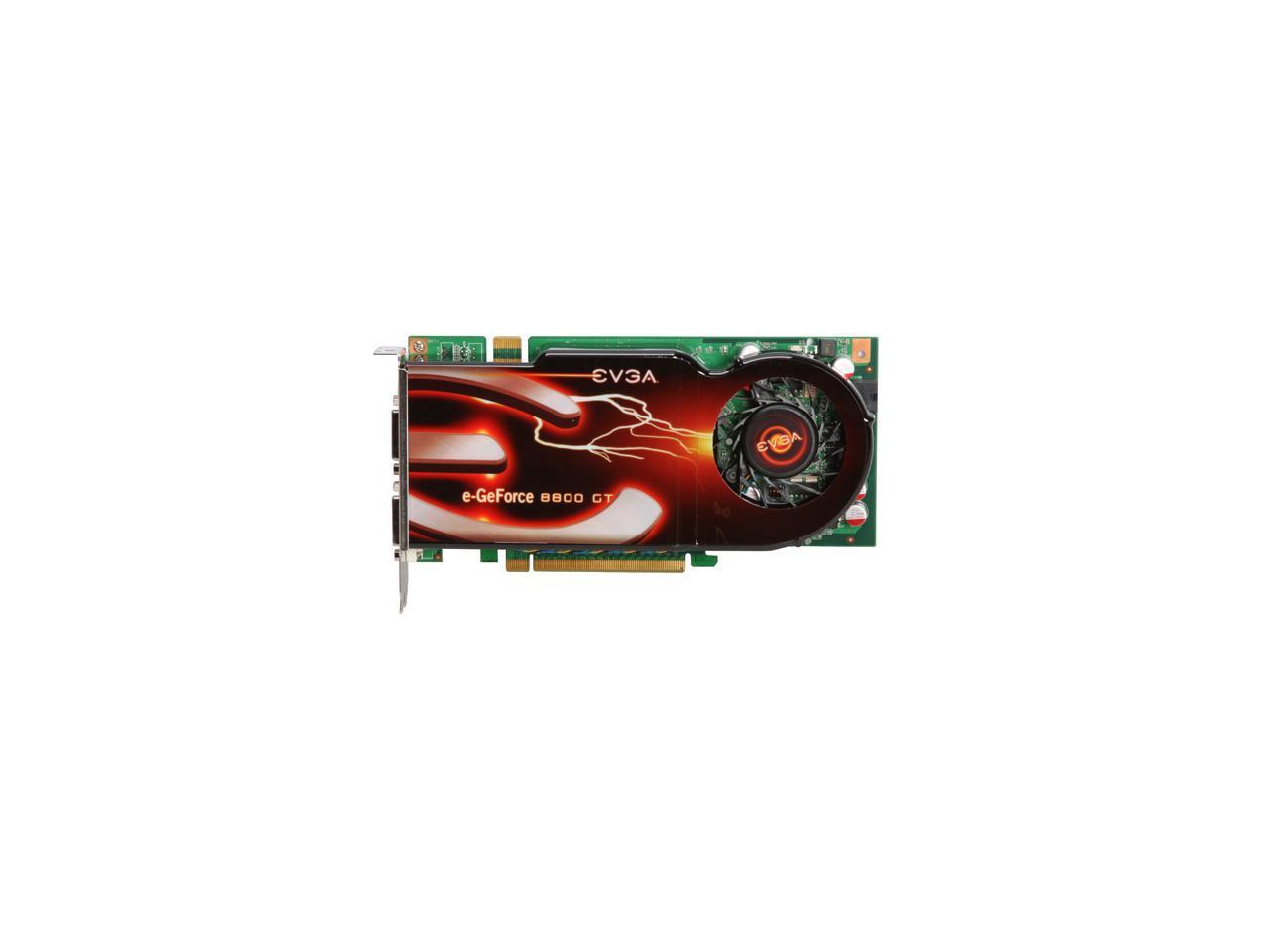 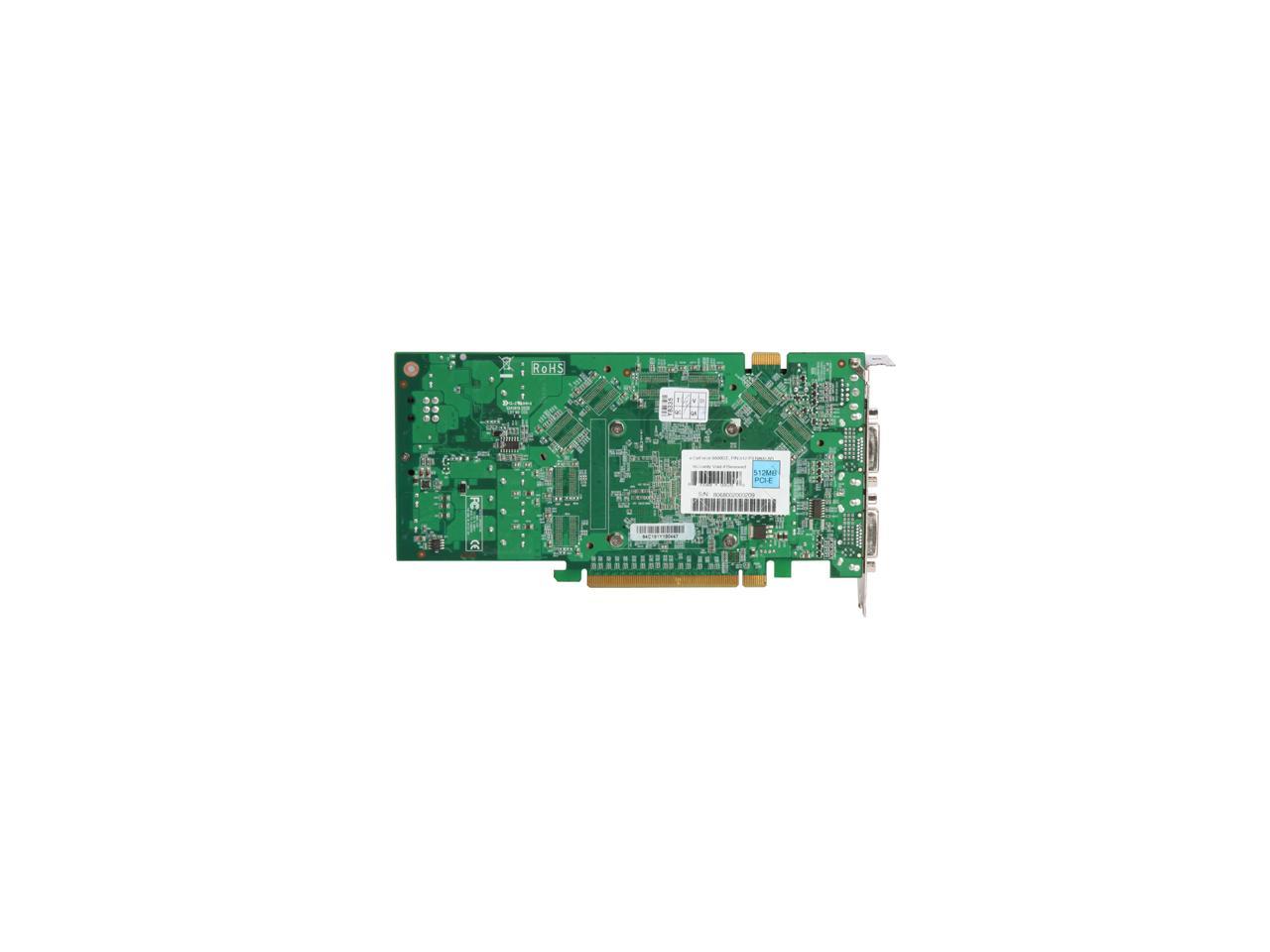 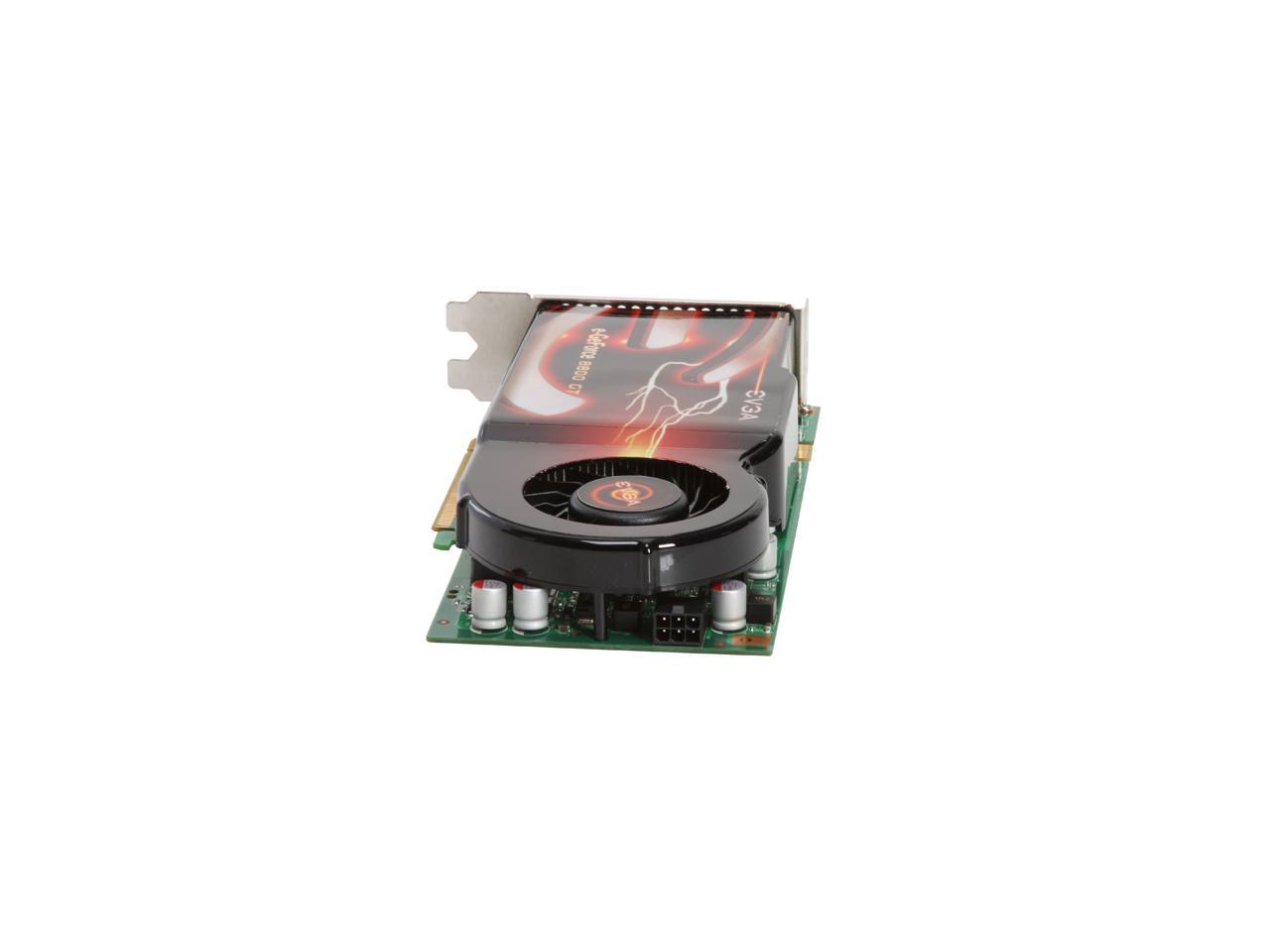 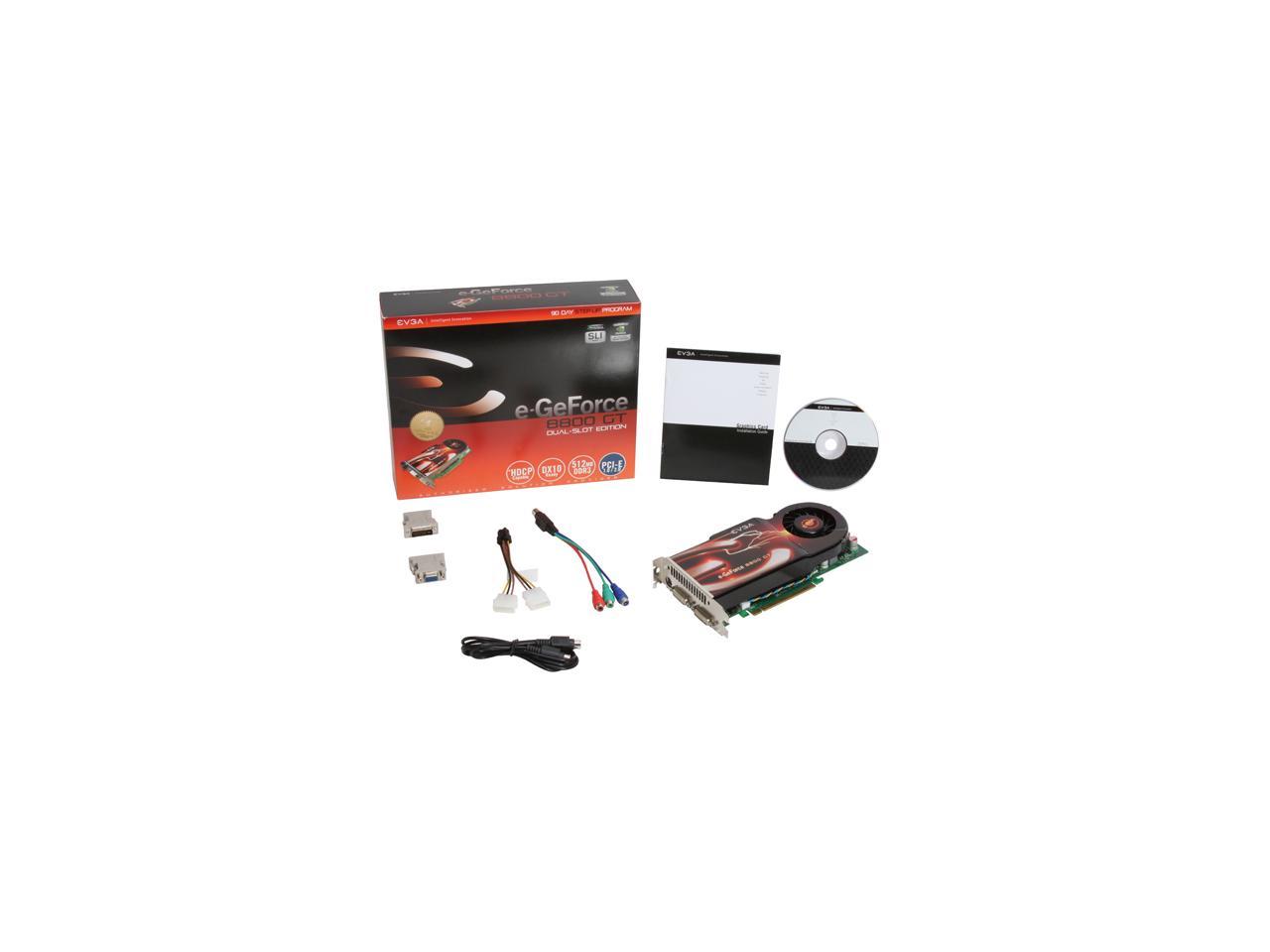 (22) Write a Review
OUT OF STOCK.
Overview
Specs
Reviews
The GeForce 8 series offers a complete family of graphic cards ready to meet the unique needs of their users. The series features a unified DirectX 10 Shader Model 4.0 & Open GL 2.0 architecture to produce stunning 3-dimensional graphics textures. With 10-bit per channel output, the 8 series produces higher fidelity color and separation. In addition, the cards support SLI and NVIDIA's PureVideo HD.
The 8800GT delivers blistering video and graphic performance. Its 754 million transistors can handle anything your games throw at it – and with reduced energy requirements. Accelerated processors offers faster video, and other high-demand graphic effects are rendered in high definition and without lag. Its 112 stream processors are fed by 512MB of 256-bit GDDR3 SDRAM running at 1800MHz to deliver a full 2560 x 1600 resolution.
The 600MHz core clock keeps everything moving and the 400MHz RAMDAC and four dual-linked DVI let you output to multiple and large monitors. Video can also be streamed via HDTV or S-Video outputs for greater flexibility. The 8800GT hits the mark for price while delivering high-end graphic performance.

Pros: The 8800gt deal I've been waiting for: A ripping great evga 8800gt with dual slot cooling at decent price.

Cons: The default fan speed of 20% idles this card at 70c, and it hits sky high temps under load (no oc), ~90c, which is very suprising for this card (see other thoughts). BTW my case is decently cooled. This is with using the lastest driver (never bothered with the shipped driver). I dropped one egg for this reason.

Overall Review: Fixed the cooling by bumping the fan up to 55%, now it idles around 50c and hits around 70c under load, even when overclocked to 670 (at which it broke no sweat). Amazing performance compared to my old 7800gt SLI for both increased FPS and image quality. I'm running it an an ancient asus A8N-SLI with a 4200+ X2 oc'ed at 2.64 and it performs just fine driving a 19" TFT. Next stop: new mobo, CPU, and RAM.

Cons: pretty big, but i have a midtower, so it doesnt matter too much. only thing i would say about this particular card is that you cant update the bios. its a #: 512-P3-N800-AR and there is no update for the N800 on nvidia's website.

Overall Review: Ravatuner still works with it despite not being able to update bios. I turned my fan duty % up to 75, runs great.

Pros: For those of you having trouble with the fan, download the new bios for the card. It fixes the trouble.

Overall Review: I made a mistake in my prior review. The 8800GTS and this card are the same dimensions ((7.8 x 4.376). I was thinking of the 640MB card when I gave a dimension of 9 inches. My apologies for any confusion. My main interest in this card with 112 pipelines versus 128 for the GTS was the $50+ difference and the better performance specs.

Pros: Fast, Looks Cool, and Nice Price. It can play Crysis On All High and Averages - 36 FPS Plays TF2 On Everything On High At The Highest Resolution. Great Card.

Cons: Gets Hot. Easy to fix though. Use Riva Tuner to make the fan faster.

Cons: Dual slot cooler is a joke. It does worse than the single slot. Even at 100% fan speed, which is terribly loud, temps are still way too high. Not to mention the default fan speed of 20% which is a complete joke.

Overall Review: They must have had extra of these coolers laying around and threw them on these cards to get rid of them. They are the same coolers from the 9600gso, and they are garbage. Labeling something as having dual slot cooling technology would seem to imply that it cools better. However, this is not the case and thus I find it to be misleading.

Pros: Its an 8800 GT! Besides being a great card the price was nice too. The dual slot is a pro for me because my case has plenty of room for it. The dual slot design helps keep the operating temperature down. This card performs well with today's demanding games and performs even better for slightly older games. Very quiet in my case when idle and during heavy gaming. Nice color and design.

Cons: First off, there was no display when I first installed and booted up. A little scary... I double checked my connections and everything was fine. I rebooted and the display came on. Weird? I have never had anything like that happen to me before. The drivers that shipped with the card didn't work quite right. The fan would roar at full blast constantly. I downloaded the latest drivers from Nvidia and that cured the problem. Maybe the drivers from the CD didn't install correctly the first time. Nevertheless, the latest drivers worked fine.

Overall Review: It seems like this card was clearly designed for overclocking. The GPU and memory speed are the same as the original 8800 GT. With the dual cooling slot design this card can withstand a higher operating frequency without overheating as much as the single slot design. I haven't overclocked it myself because all my games play fine on it. This may change in the future. The card is fairly large, although it didn't seem quite as huge as everyone had talked about. If you have a small tower this card probably won't fit, especially with the dual slot design. This card is a great value considering its price/performance ratio and overclocking ability. System Specifications - Dell XPS 410 | Dell 22" Widescreen Flat Panel Monitor | Corsair 650W Power Supply | Intel Core 2 Quad Q6600 2.4GHz | 3GB DDR2 800 Memory (2GB Dell + 1GB Wintec) | Creative Sound Blaster Audigy SE Sound Card | Samsung 320GB 7200 RPM Hard Drive | Samsung DVD R/RW | Nvidia GeForce 8800 GT 512 MB

Pros: Works good. No issues with install. Can handle overclocking well if you adjust fan speeds.

Cons: The fan defaults to 20% speed. This is nice and quiet, but does a terrible job of cooling even at stock speeds.

Overall Review: Make sure to adjust the fan speeds and it will treat you well. I set it to 50% and it is fairly quiet and does an adequate job of cooling even OC'd heavily.