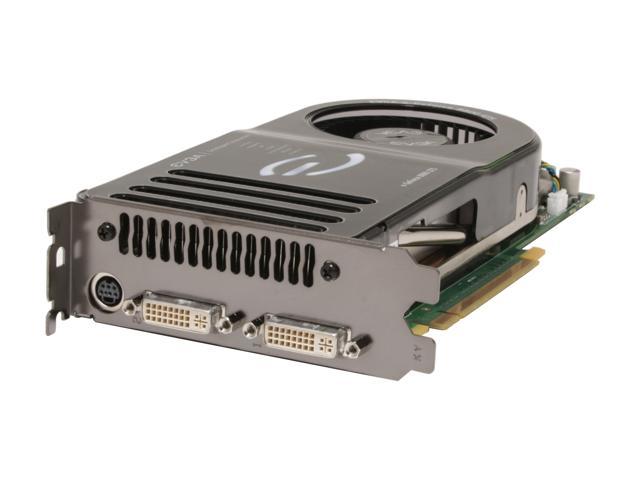 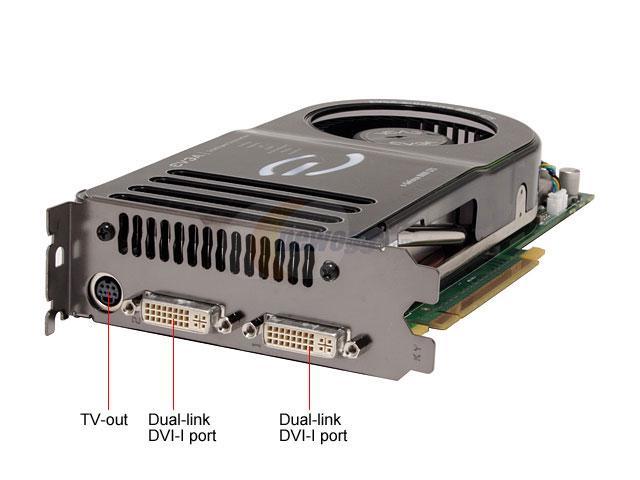 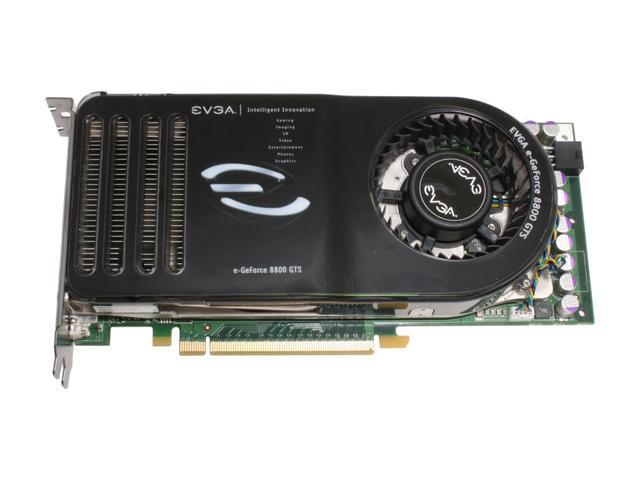 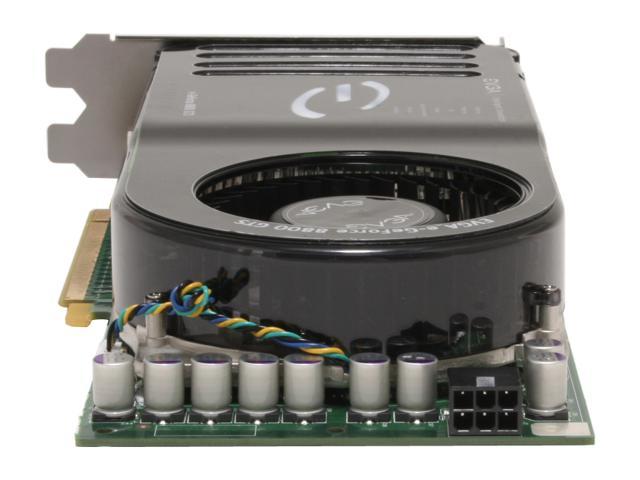 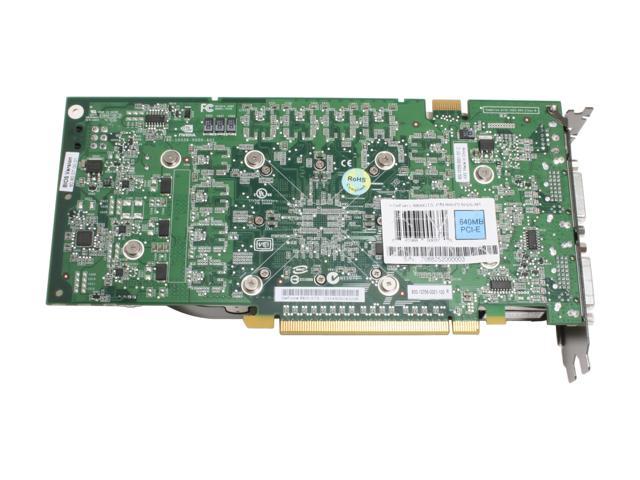 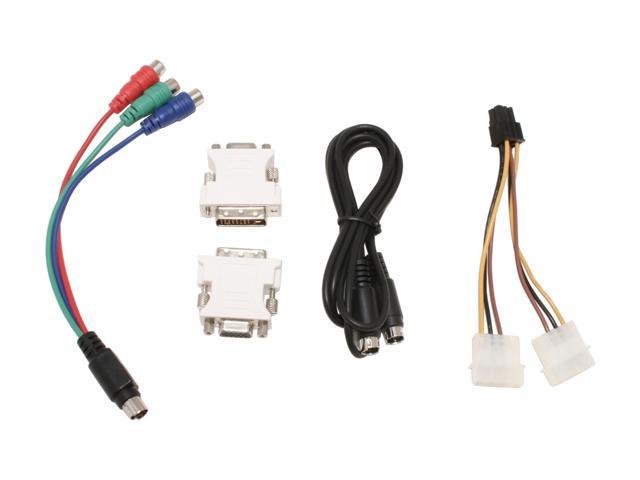 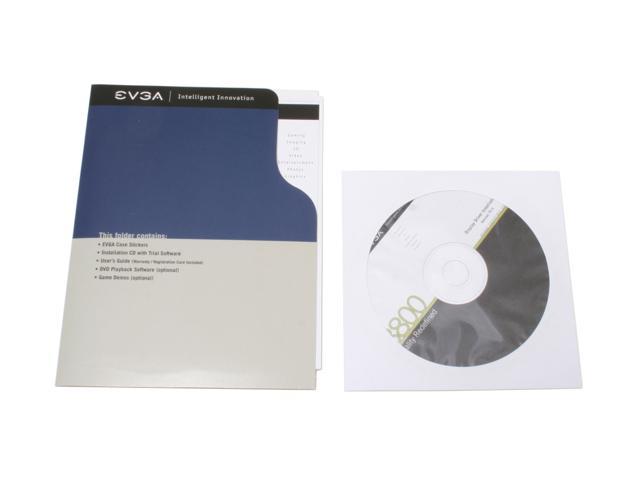 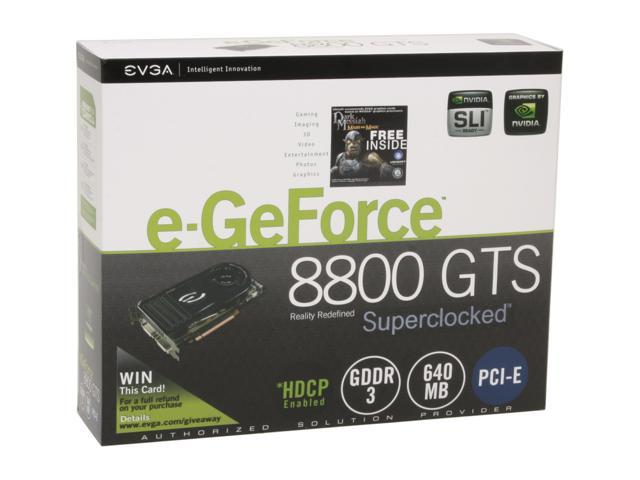 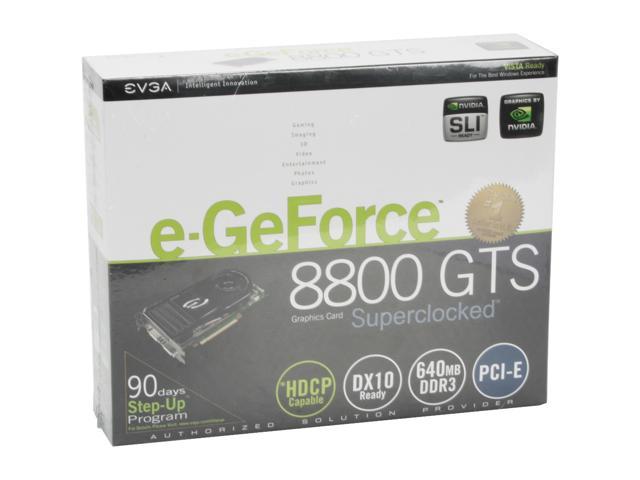 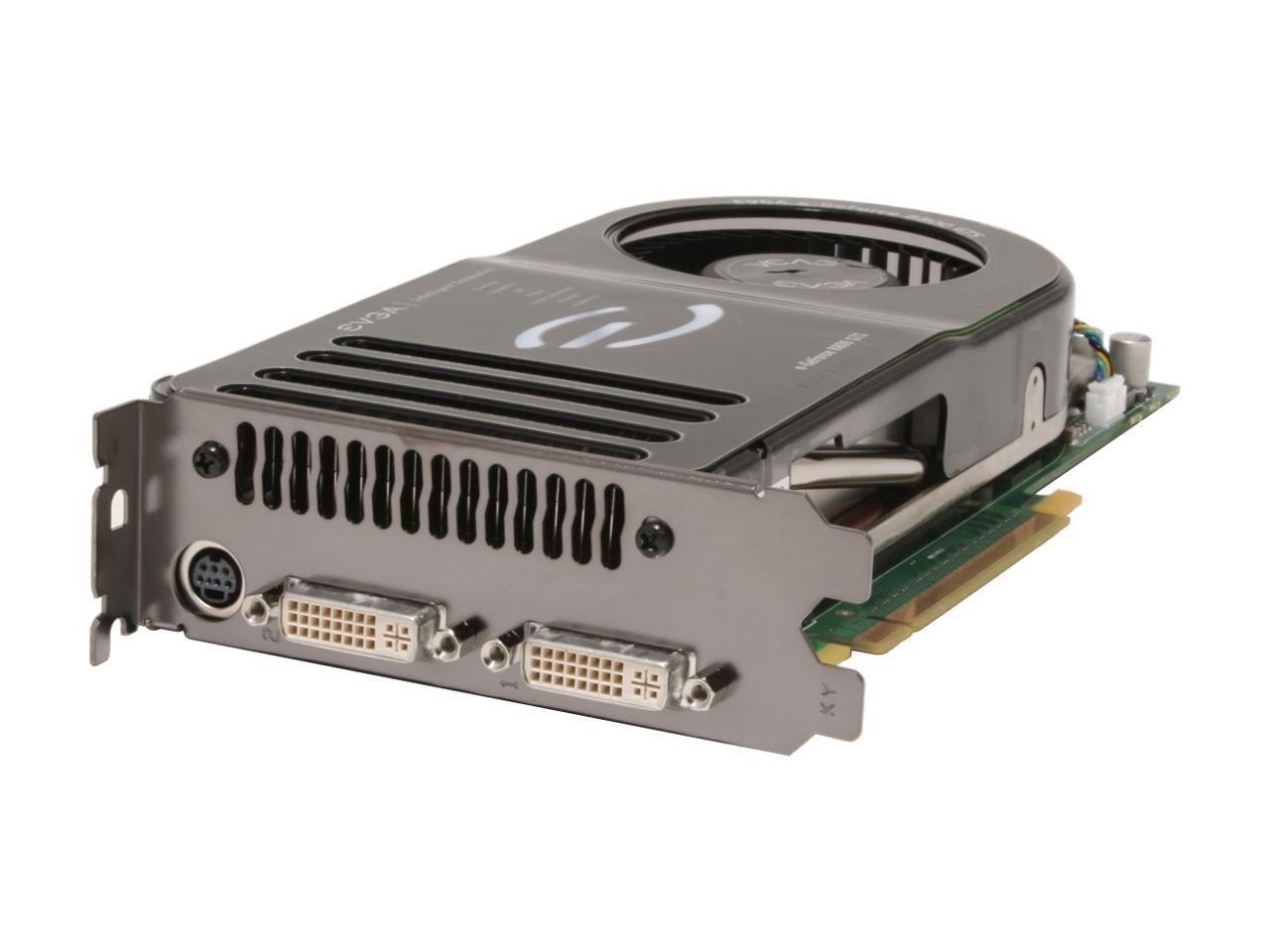 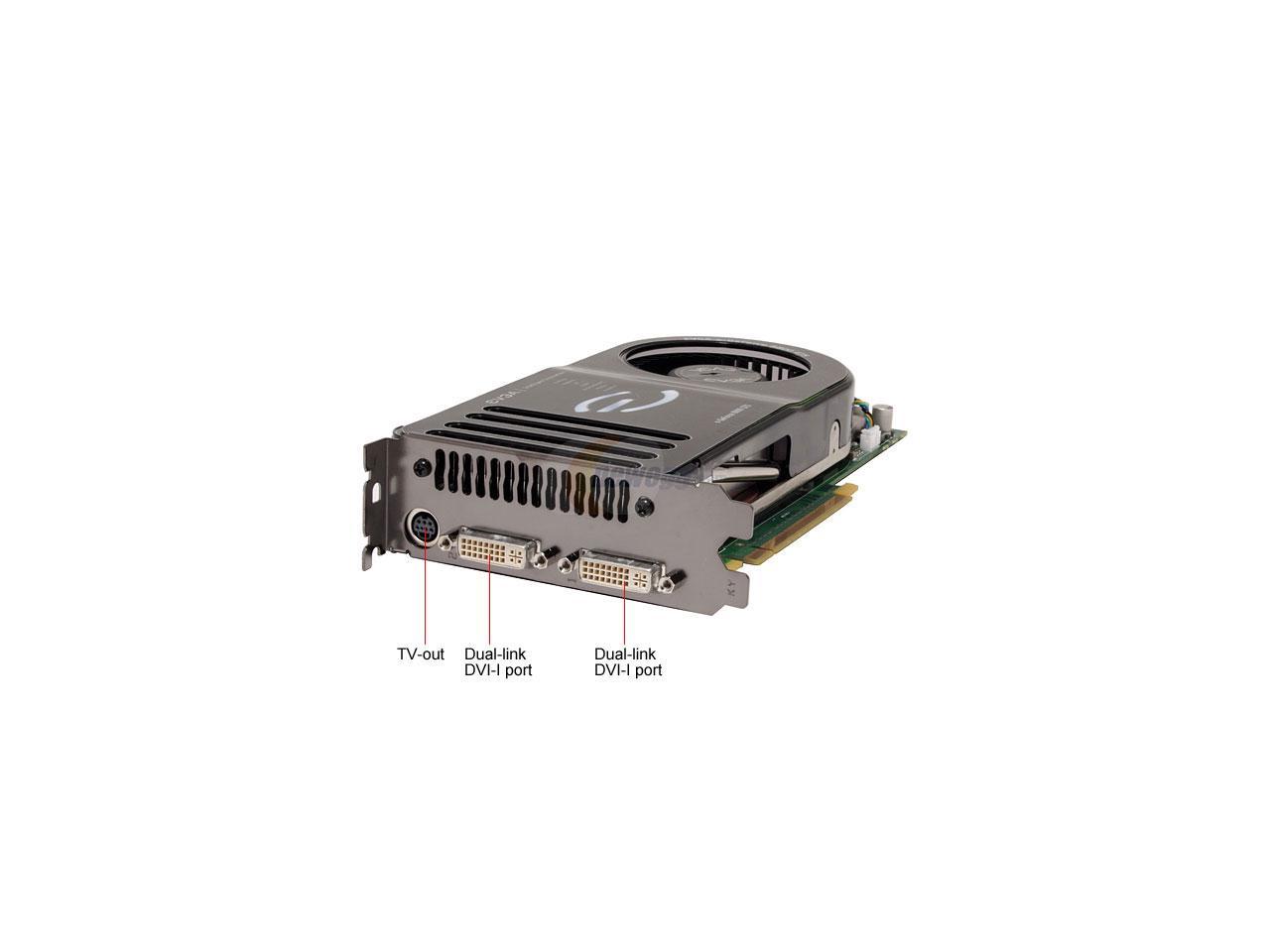 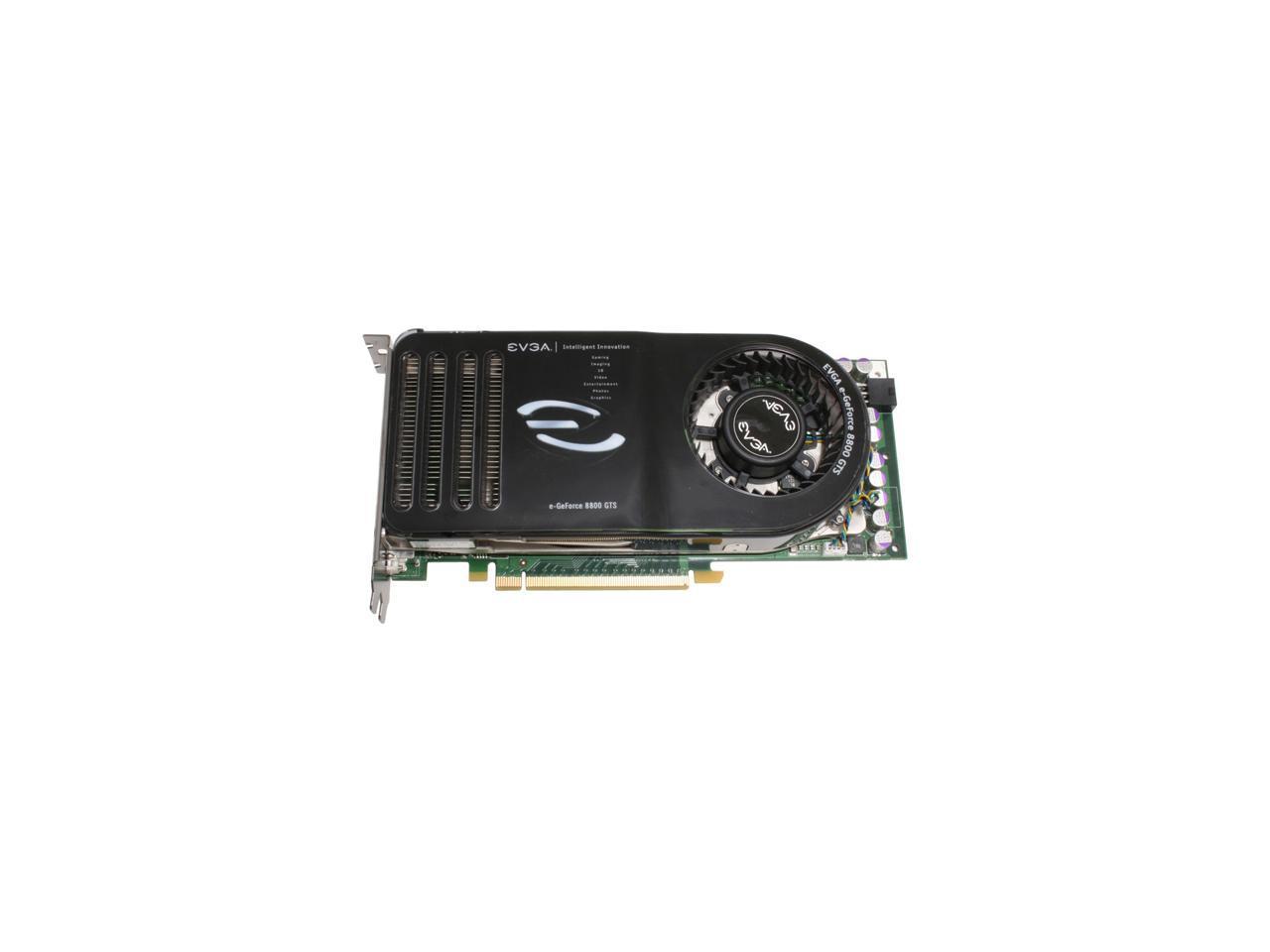 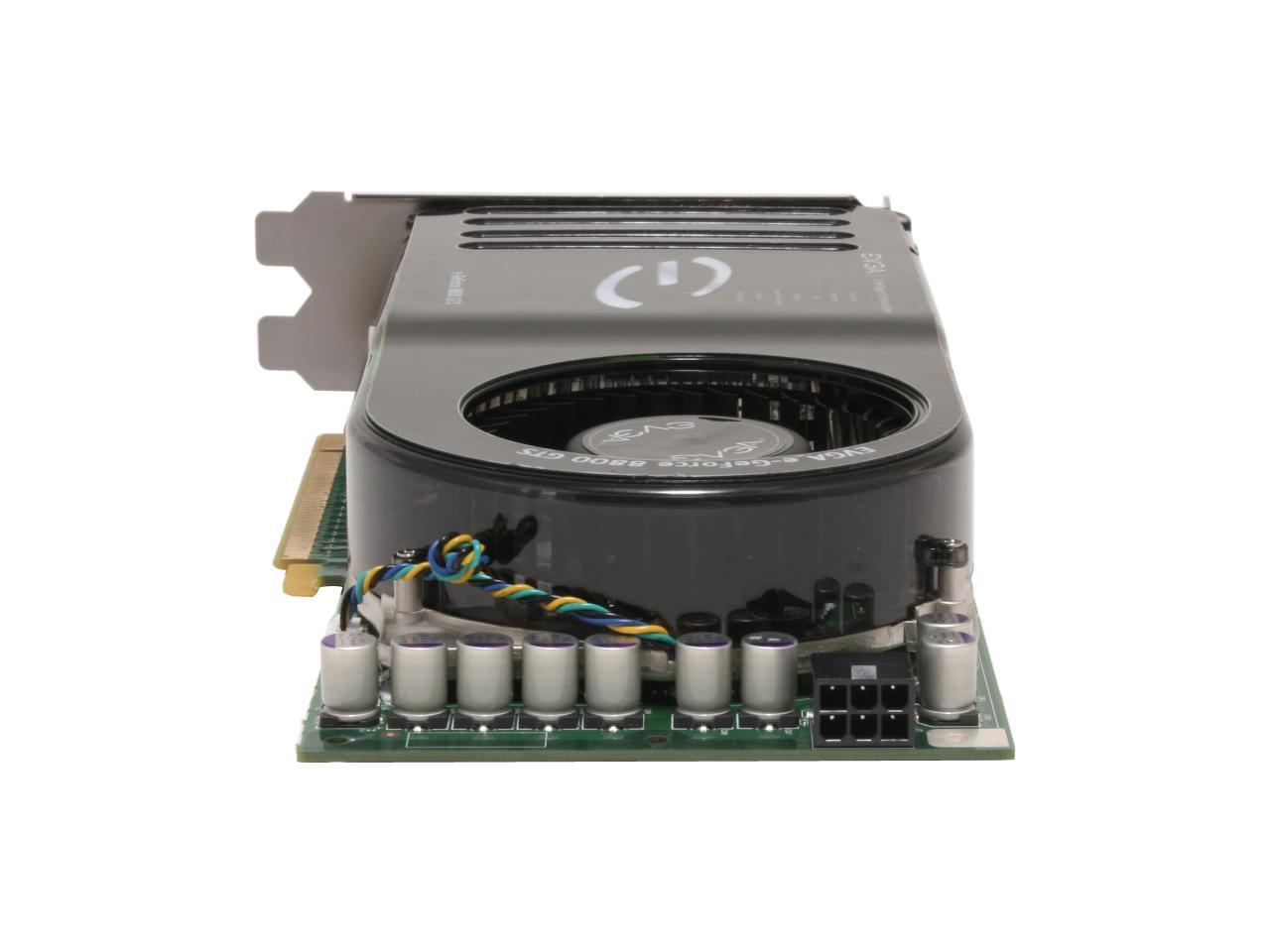 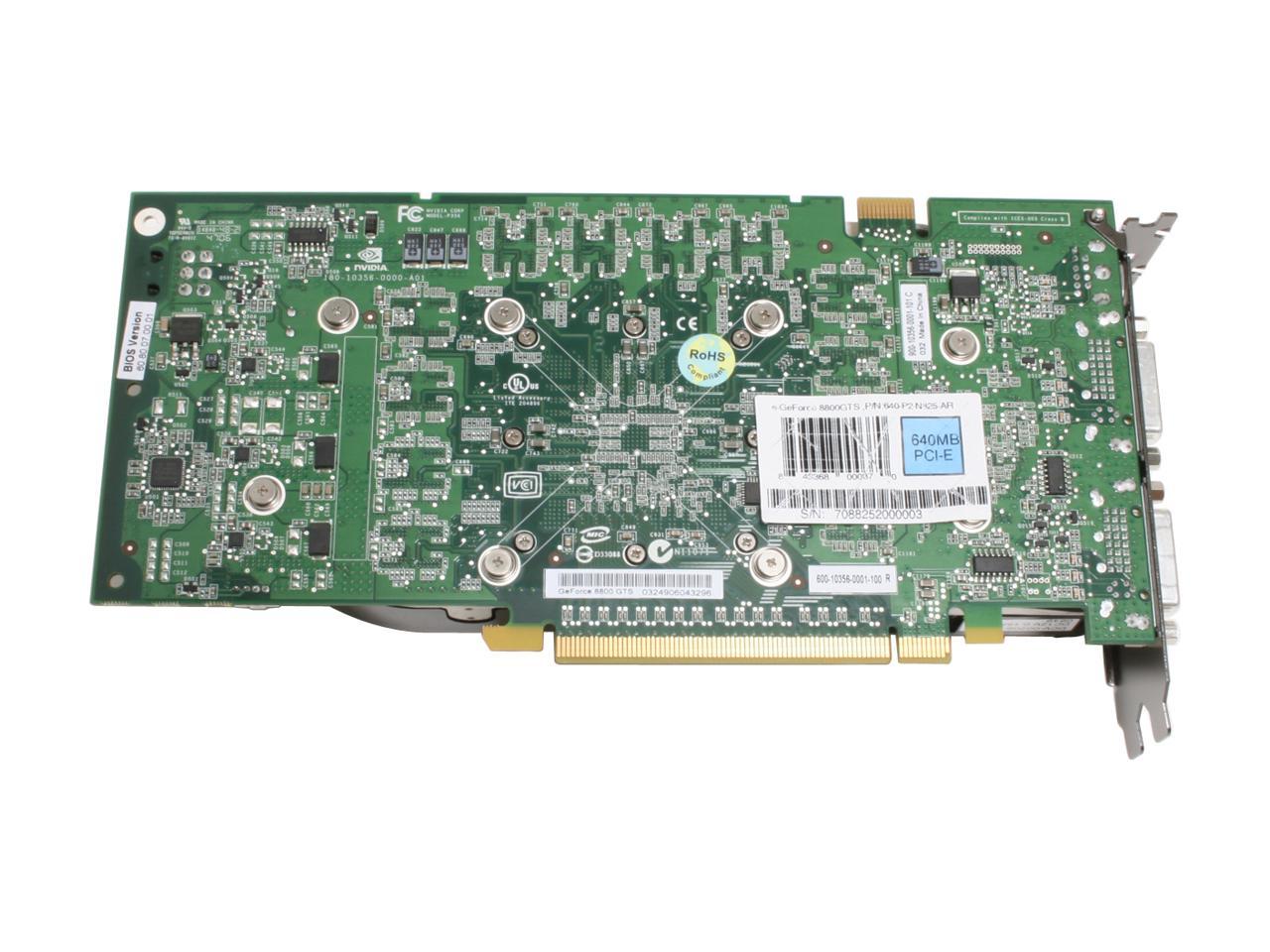 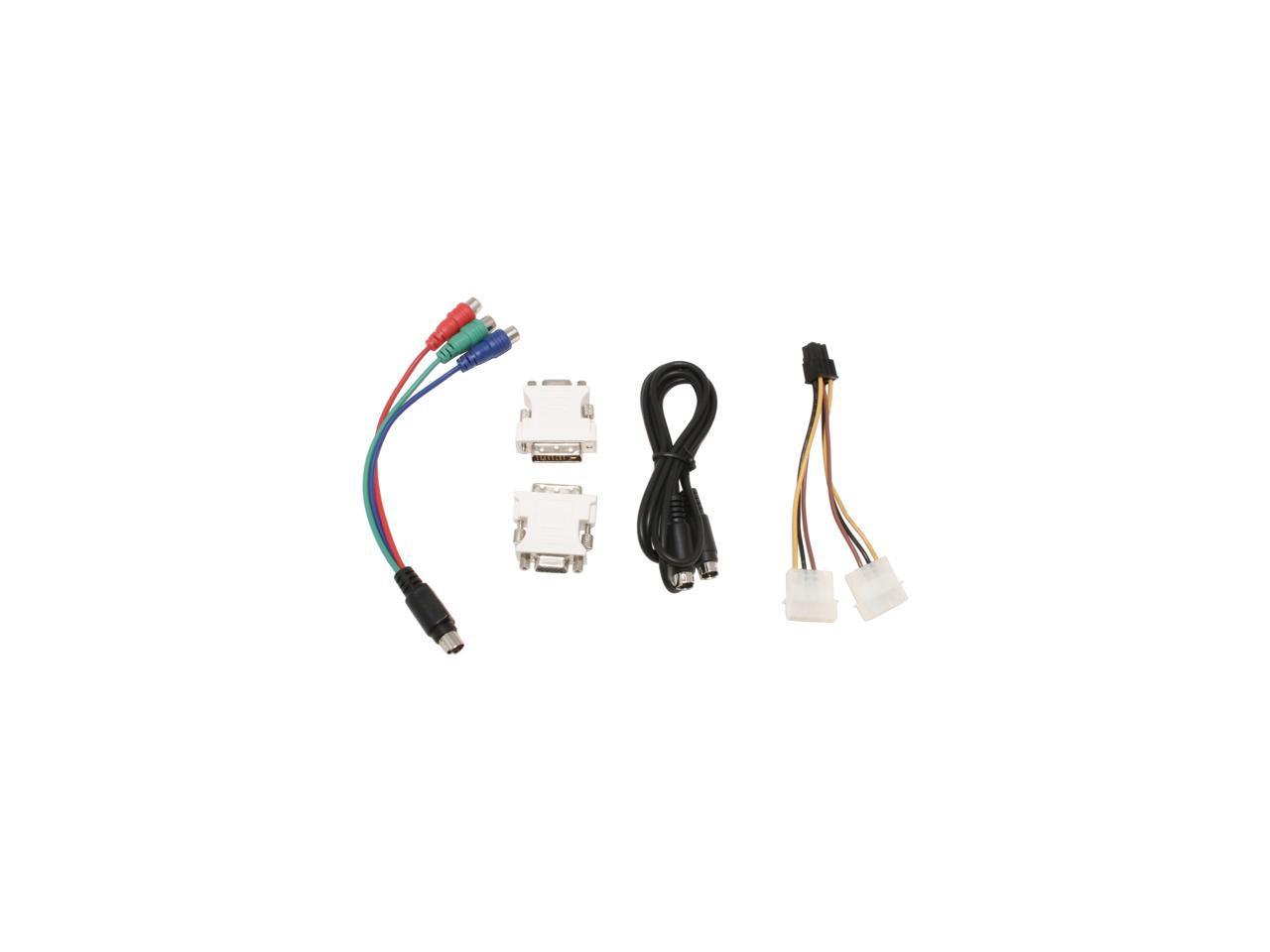 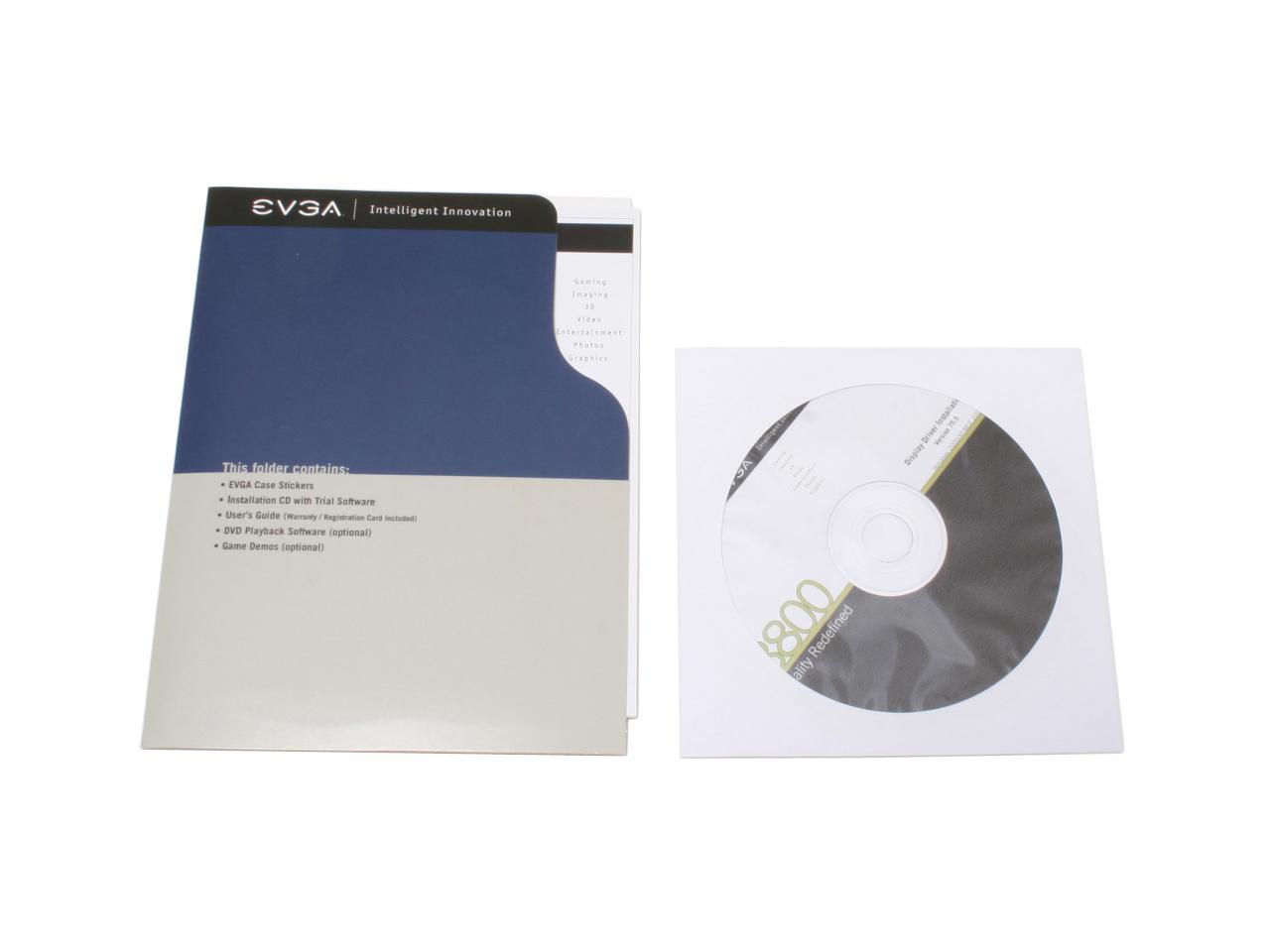 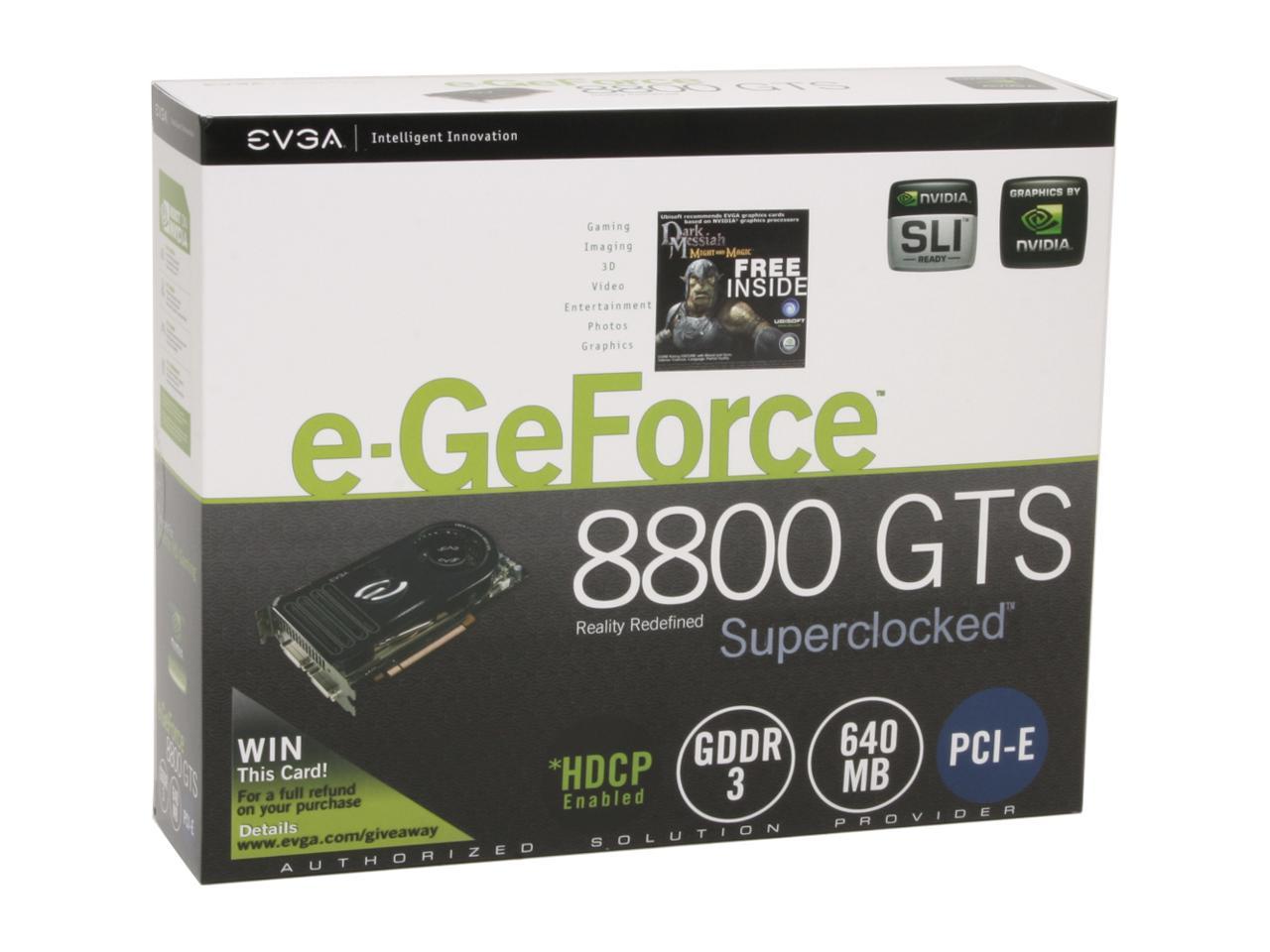 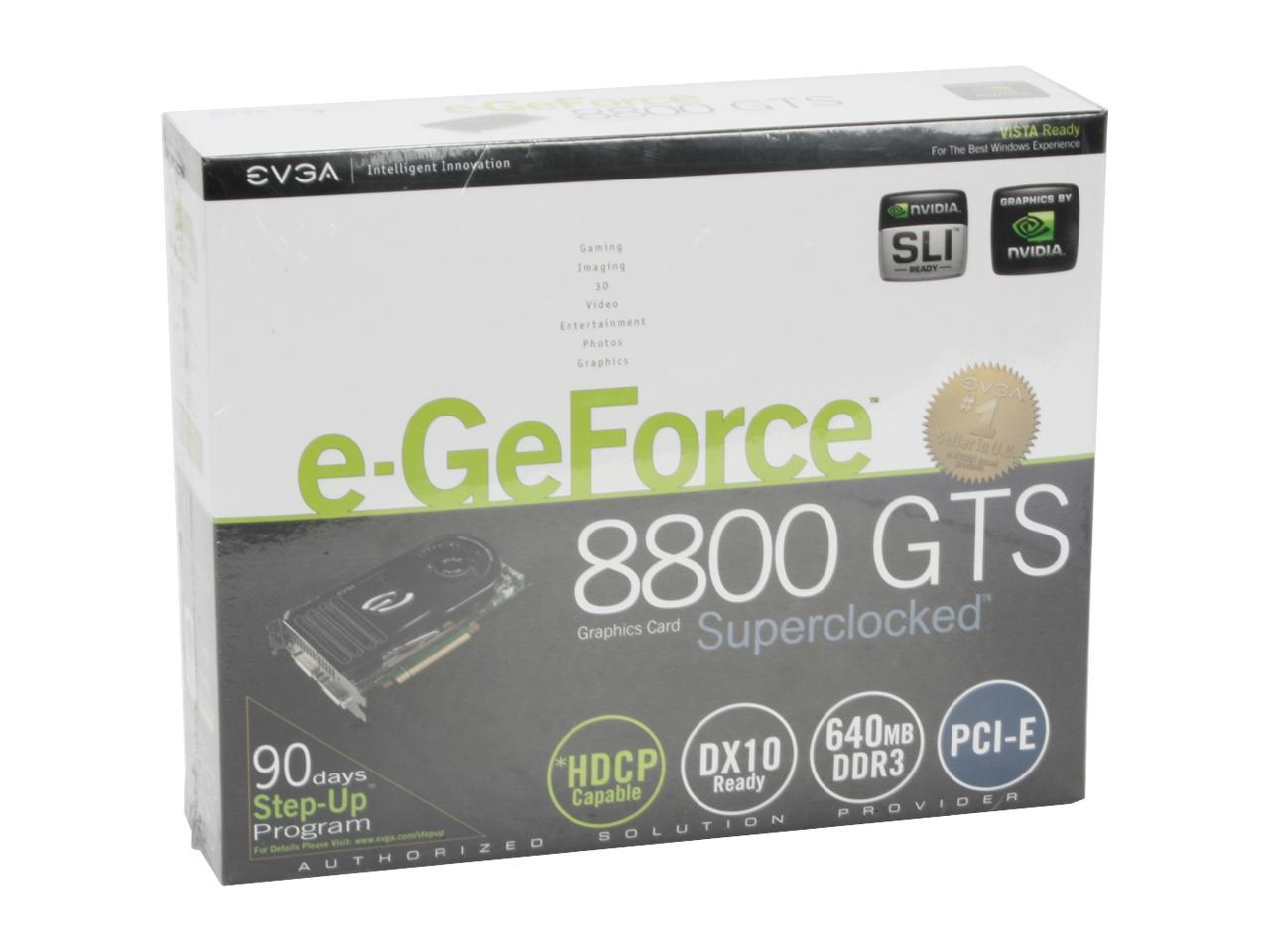 (305) Write a Review
OUT OF STOCK.
Overview
Specs
Reviews
Unleash the power of NVIDIA’s GeForce 8800 series GPUs! This amazing card is built around a screaming fast GPU: the GeForce 8800GTS. The massive 640MB of GDDR3 RAM clocks at 1700MHz. You'll see blazing performance, manhandling any task you give it. If you’re strong enough to handle it, add another SLI ready card to kick things up a little higher.
Of course, the card is built for Vista! It will easily handle whatever you throw at it. With Vista, you get DirectX 10 and Shader Model 4.0 support which lets you play the most advanced games on the market. The built in TV encoder supports HDTV, S-Video and Component video out. HDCP lets you view programming in full HD mode.
NVIDIA’s PureVideo brings the technology from high-end video equipment to your computer. Dedicated processing cores and software delivers a vivid, lifelike picture free of the annoying artifacts and imperfections you get from standard PC-based video solutions. See everything clearer than ever before!

Pros: Upgrading from a 256MB 7800 GTX I've seen a substantial increase in performance, more so than what I was expecting. Not as loud as what many other reviews might have stated. In my opinion, the ten percent price increase for ten percent performance jump in most games with the factory issued overclock is worth it; I would rather have my O/C covered in the warranty for a card at this price range than doing it on my own terms. EVGA also has a great warranty behind their cards, as well as their 90-day Step Up program (let's hope their next product is out before 9/14 >=] ).

Cons: Make sure your case is big enough to fit this card. Also, pay attention to your motherboard layout, particularly where the PCIe slot is. I had to sacrifice the PCI slot beside it to make room for its dual slot exhaust. Not a problem since my only other card in my machine is my sound card (I did have to move it two slots down though to make room for proper air flow), but be aware in case you have any other cards installed. Having sufficient ventilation is definitely recommended; idle temp. on the card was in the high 60Cs at first. I turned all my case fans speeds from Low to Medium and saw a 5-10 degree jump down in temp.

Overall Review: Having a FX-60 CPU, nForce4 Ultra mobo, 2GB PC3200 RAM, I got 8900+ marks on 3DMark06, which ain't too shabby; I know my processor is my major bottleneck, but it's less drastic with the GTS instead of the 8800 GTX, so I decided this card was my best buy considering I am not building a brand new PC for at least two more years. The drivers for the card are still maturing, so be patient. Running XP Pro, I noticed playing FEAR: Extraction Point with MAX settings, I had an unsteady frame rate, from mid 100s all the way down to low 30s. Changing the 158.22 driver to the beta 162.15, my situation improved more.

Cons: One of the plugs on the back of the card was chipped. Fortunately it still works but it made me sick to my stomach when I saw the damage.

Overall Review: It generates quite a bit of heat. You can feel it blowing quite warm hair out of its vent while the computer is idling. It is known but these cards are very long. Make sure it will fit before you buy. I have less than .25" of clearance from my hd bays.

Pros: Detected nicely on boot, all I had to do was install some of the software and drivers. I'm now running essentially every game I own without so much as a stutter. The expense of buying two of them kept me from going SLI as well as from buying the GTX, but so far I haven't even felt the need to go higher than this.

Cons: Would not setup correctly in 64 bit XP. There may be drivers out there for this, but I don't believe they came with the install CD. The software wouldn't even install for me, and I had to use Windows to configure the display. Not a big deal for me since nothing else I wanted to run was set up for 64 bits. I went back to good ol' XP Pro 32 bit and everything installed and worked fine.

Overall Review: Great card, the price and performance is well worth the shot to the wallet. I would hesitate before buying 2. Maybe in a year when the major games come out it would be necessary, but the price should come down by then anyway. Specs: Intel Core 2 Duo E6600 Conroe 2.4GHz, ASUS P5B Deluxe, WD Raptor 150GB 10K rpm, Seagate Barracuda 7.2K rpm 320GB, EVGA GeForce 8, Kingston HyperX 2GB 240 pin DDR2 SDRAM PC2 6400, Rosewill 550W ATX12V Power supply.

Pros: A beast of a card. I upgraded from an EVGA non-OCed 7800GT and the difference is staggering. For instance, STALKER was getting single digit FPS at 1680x1050 with high detail and object dynamic lighting. The 8800 purrs like a kitten at the same resolution, high detail and full dynamic lighting. It fits with a little room to spare in my Antec Sonata 2, though I would have had trouble if I had the optional 120mm fan mounted by the drive bays. It does run noticeably hotter than my old card but surprisingly the fan is much quieter during normal operation. My 500W Antec PSU seems to be keeping up with this thing without any problems.

Cons: It does run a bit hot, but I haven't found that to be problematic yet.

Overall Review: I would've gone with the 320MB version of the same card, but the smaller amount of VRAM really hurts it at 1680x1050 on a few games that push a ton of textures, such as GRAW.

Pros: Card is great...running great...it runs hot, but a case with decent ventilation should not have a problem. Was racing Toca Race Driver 3, and actually ran into the wall, because I was too busy looking at the reflections of the trees and grandstands going by in the reflection on the hood of the car.

Overall Review: Card is long...if you are using ide cables, you might have a little bit of a cluster...Sata cables should pose no problems

Pros: This thing is great. I have it overclocked to 635mhz core clock and 1950mhz memory clock, all stable! It beats a stock gtx, that's right beats it. All u have to do is download nvidia's ntune program to overclock the card further. Not to mention it goes with an overclocked core2 duo e6700 at 3.2Ghz and corsair pc6400 at 832mhz! Its ROCKIN!

Cons: not a gtx? but who cares when your card beat one!

Pros: This is the first card In a long time that i felt was worth the money that i spent. I was actually able to drastically improve my FPS in every game. I upgraded from a 7900GT and the difference is night and day!!

Overall Review: I am happy with my choice of this one vs the GTX its a ton of performance for a great price.

Pros: Fast for most applications

Cons: BioShock crashes every 5 to 15 min. 2K games finally admitted it's a nvidia driver issue. Nvidia has issued 4 or 5 driver versions in the last month... none have fixed game play... nearly 400 bucks to play the latest games and no joy! And no support from evga or nvida to speak of. The NVIDA temp. tracking tool says it's running at 64C... but the tool crashes alot and locks... so can it be trusted?

Overall Review: This is totally unacceptable... they are hacking through the problem and breaking the NVIDIA dashboard tools and not fixing game play. Buyer beware! In the release notes it states that the NVIDIA "the way it's meant to be played" series of games (all the latest titles) have "compatibility issues." Kinda funny, they paid to brand games that won&#8217;t run on their product. Hope it costs them big!