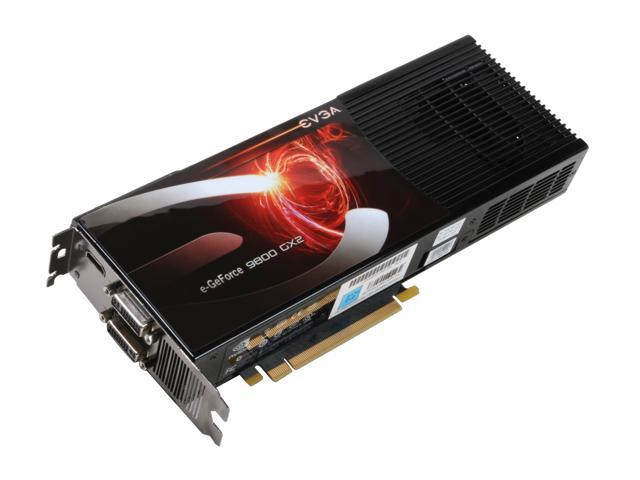 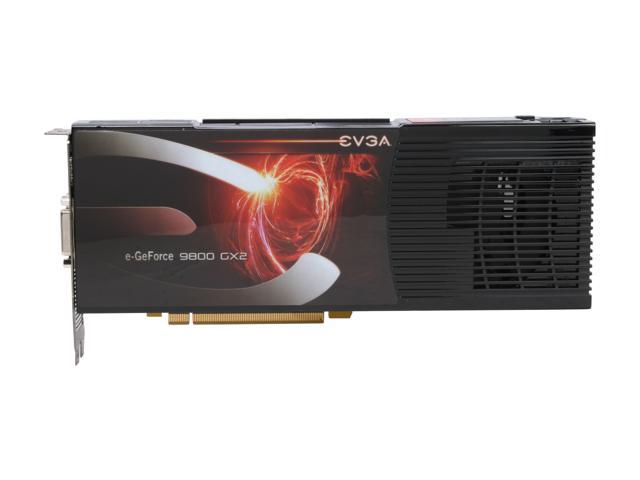 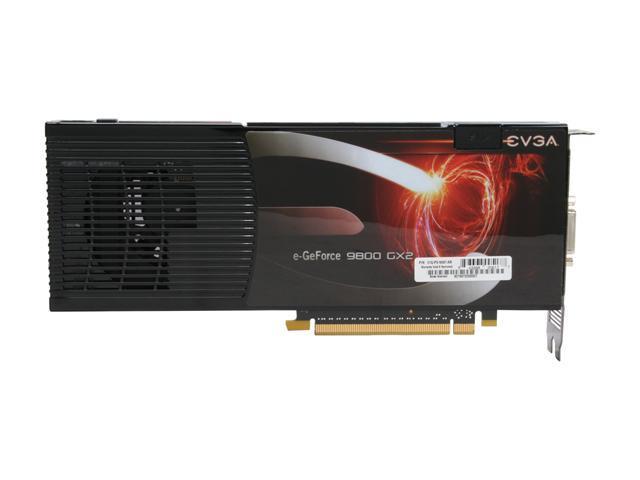 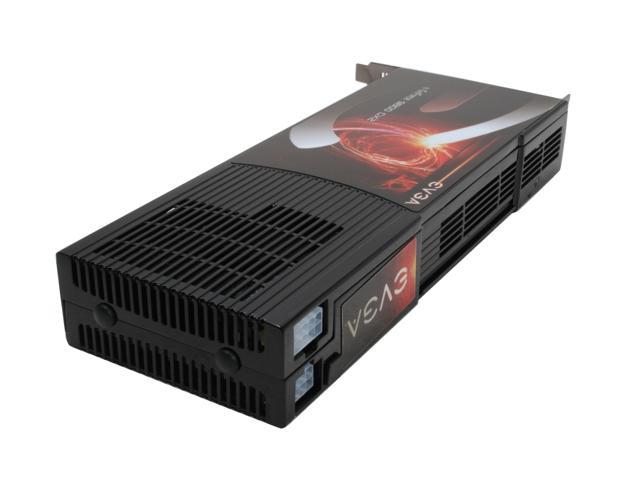 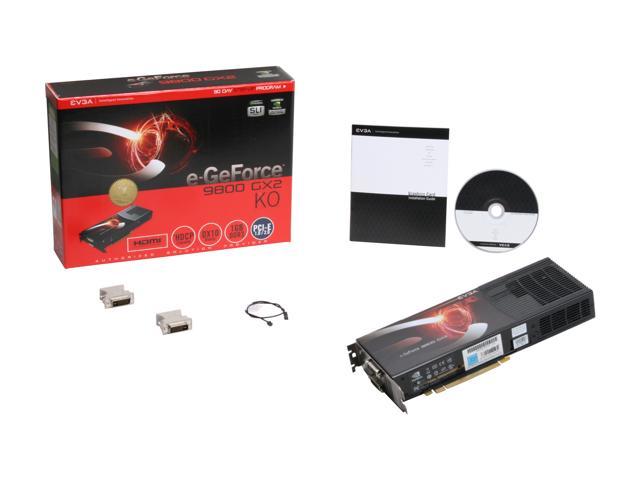 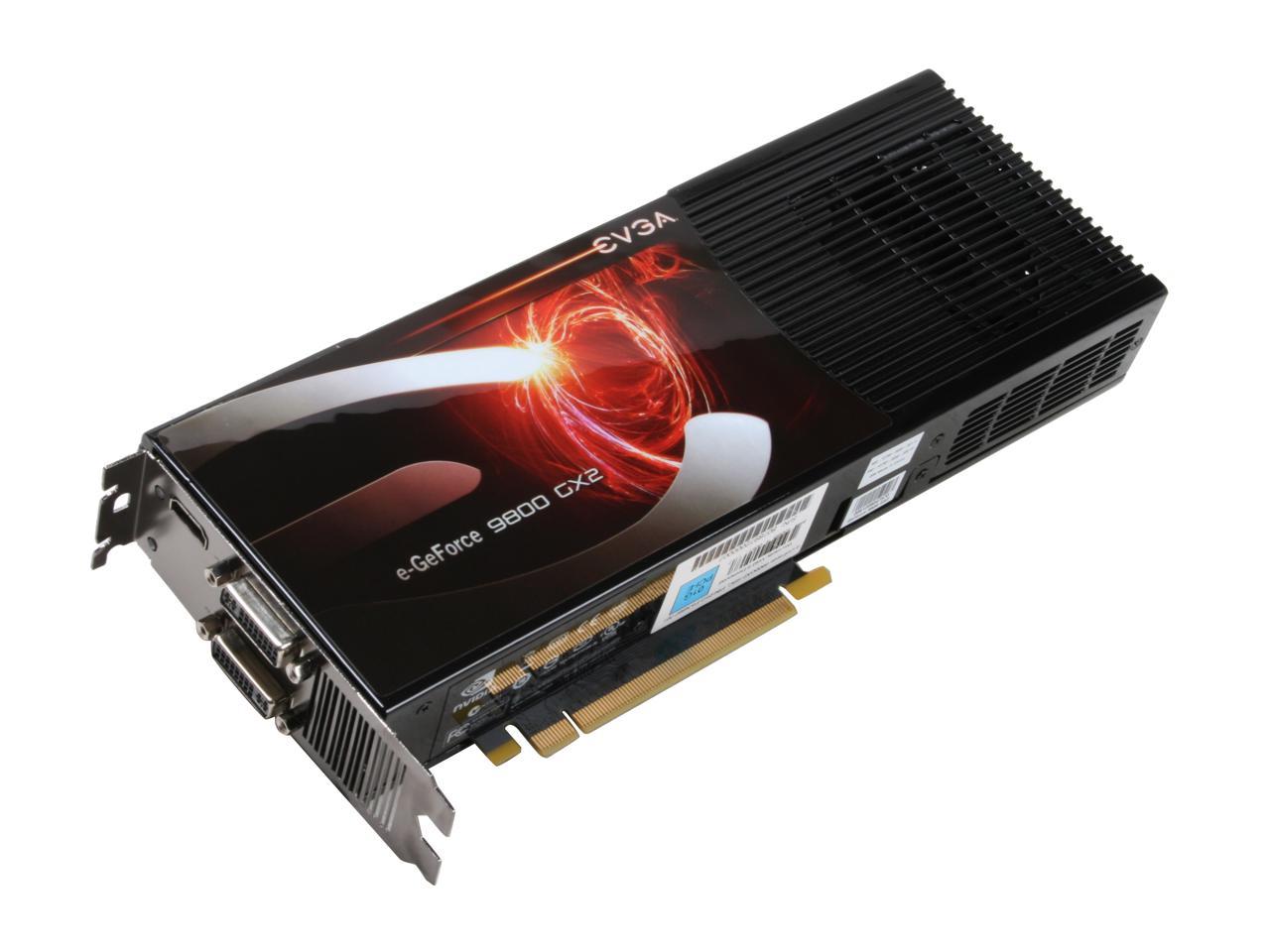 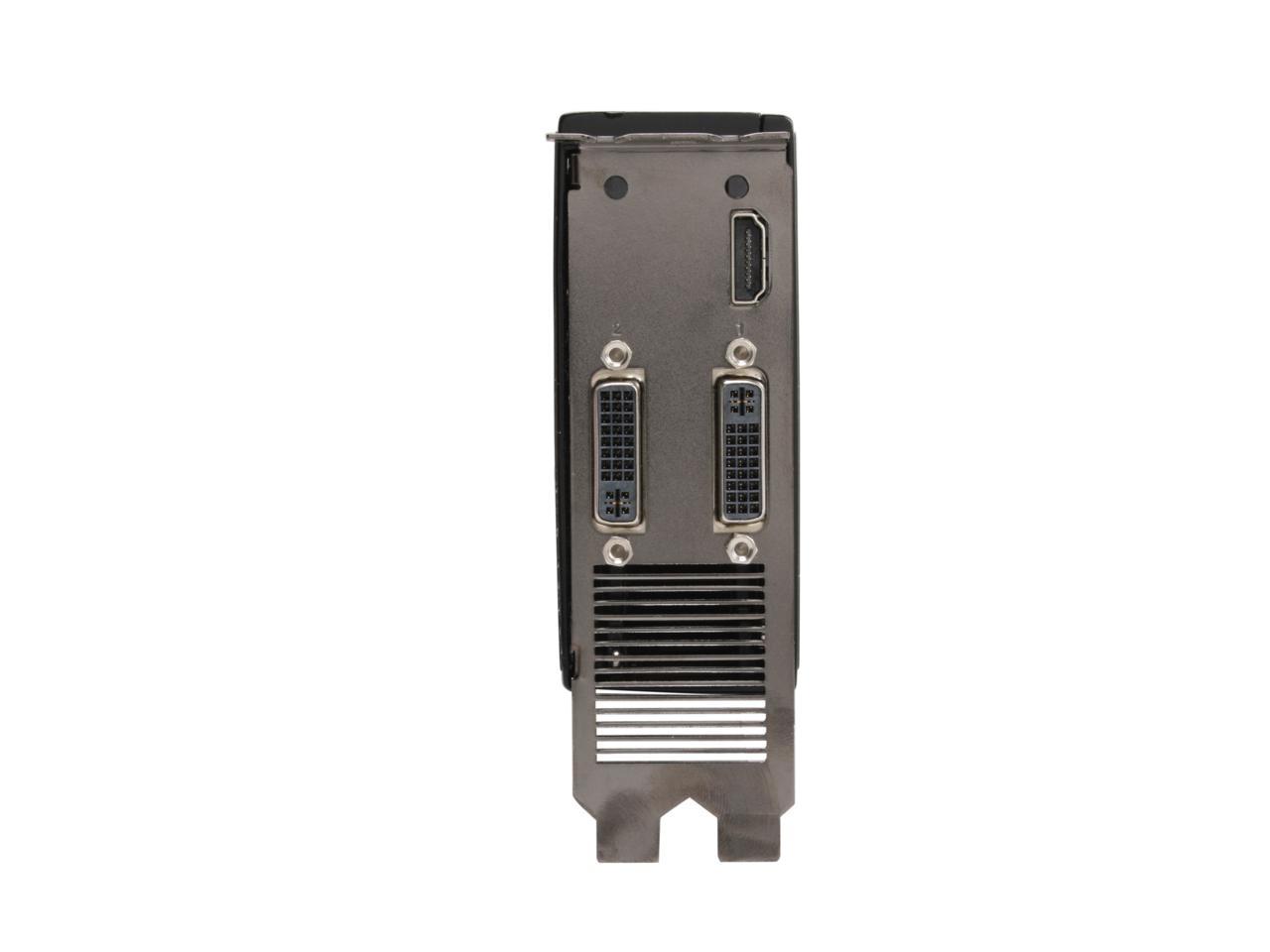 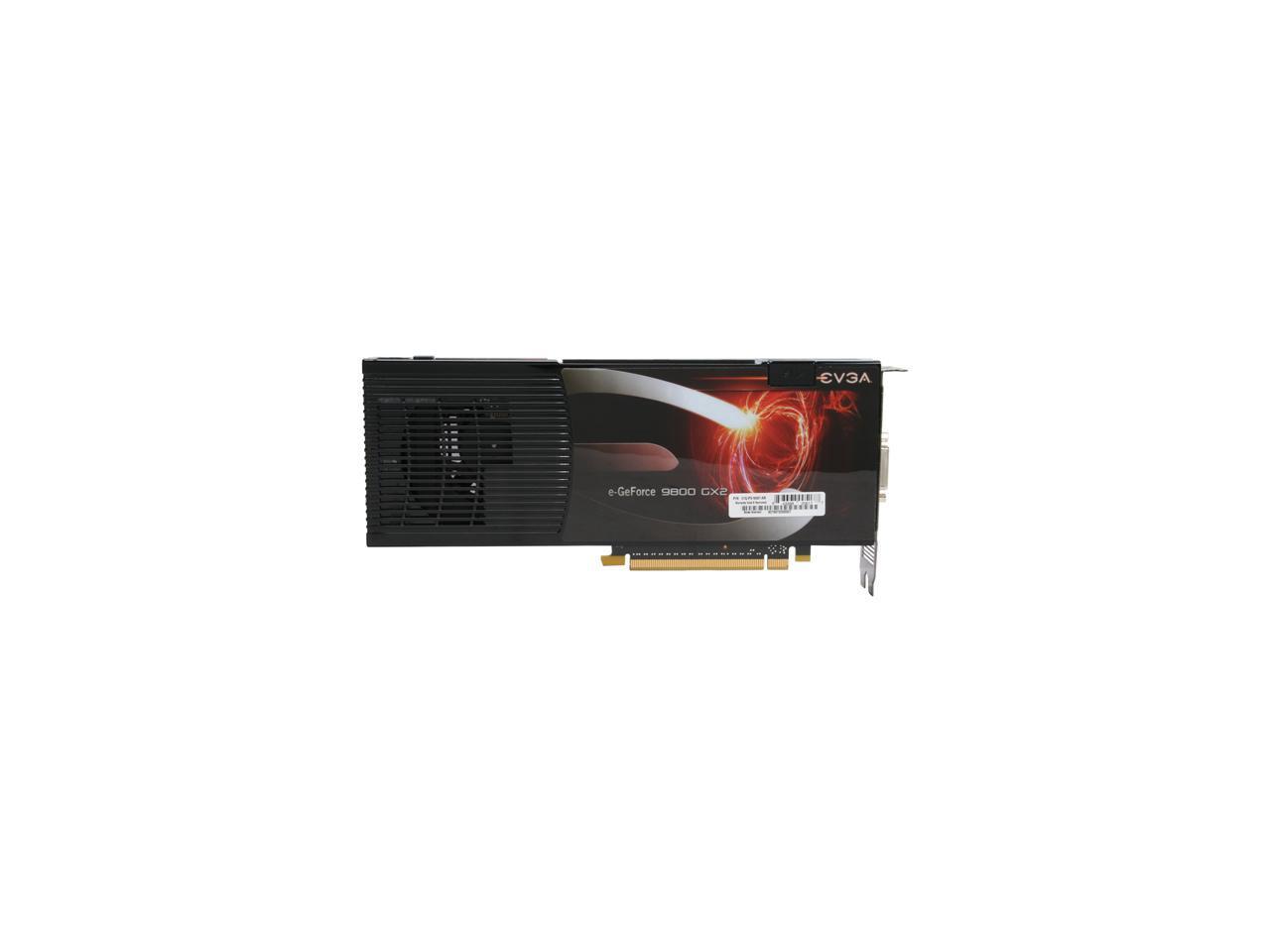 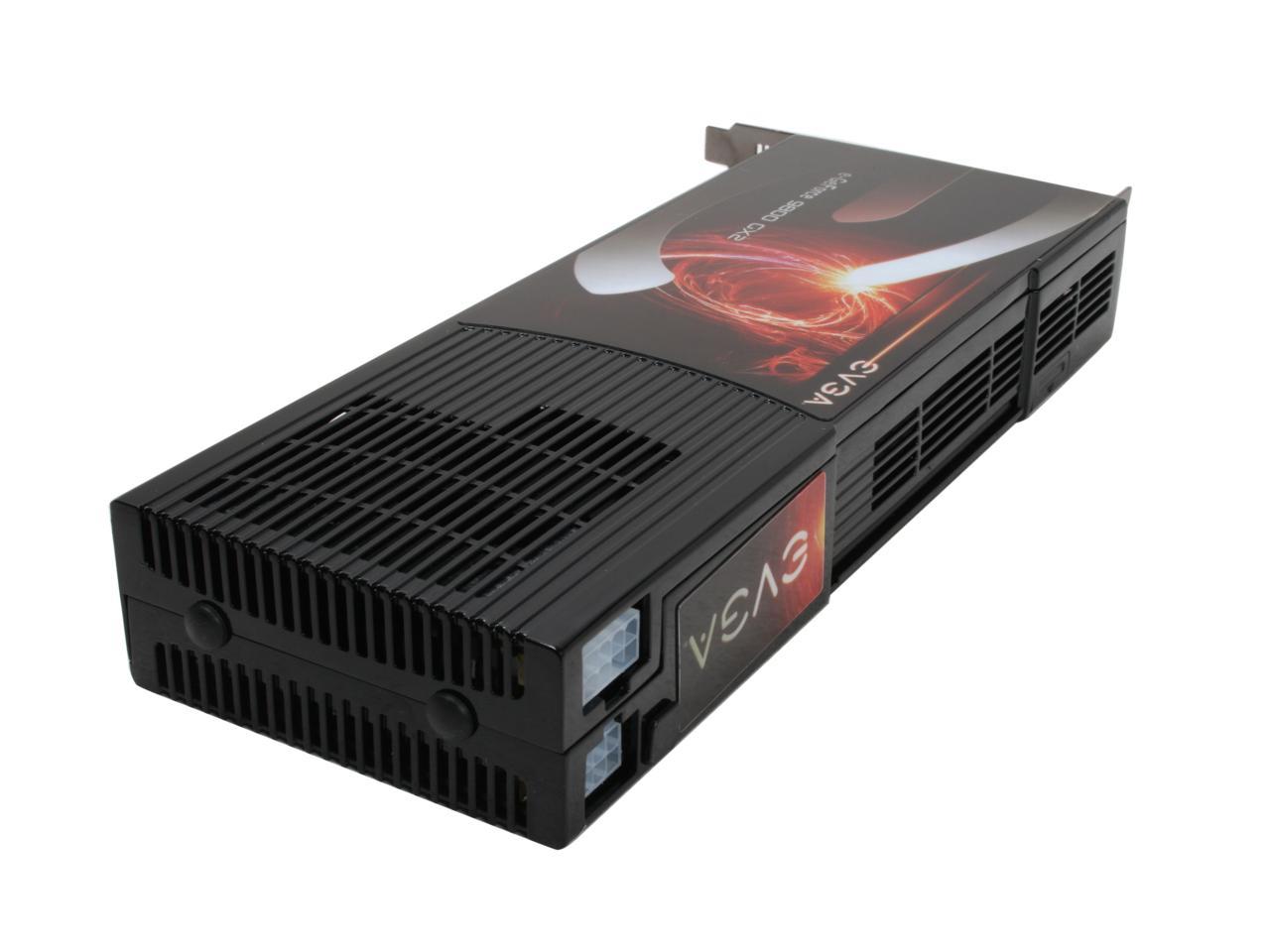 (16) Write a Review
OUT OF STOCK.
Overview
Specs
Reviews
NVIDIA's ninth generation series of graphics cards brings cutting edge technology and advanced capabilities together to provide best-in-class performance. The 9800GX2 is the solution for all your most demanding graphic needs. It’s Microsoft Vista ready and equipped with a PCI-Express 2.0 interface for the latest system. The 9800 supports Quad SLI to seriously boost your performance options with up to four graphic cards for insane flow rates.
The KO edition delivers a higher frame rate while remaining cooler than a superclocked version. The card's core clock runs at 650MHz relieving your CPU of pixel crunching duty. Data surges through the 9800's 256 stream processors fed by 1GB of 512-bit 2050MHz GDDR3 memory. Support for DirectX 10, Shader Model 4.0, OpenGL 2.1 and NVIDIA's PureVideoHD are built in to render even the most intense environmental effects or HD DVD video with brilliant clarity.
Twin dual-linked DVI and 400 MHz RAMDAC displays 2560 x 1600 resolution video and graphics on even the largest monitors or uncompressed digital streams can also be output via the HDMI port. The 9800 delivers fluid frame rates and HD video with solid performance. If your motherboard can take it, the 9800GX2 can dish it out.

Cons: Huge! Takes up a lot of space, covers two sata ports on my MB. Also, you need to read the specs because it requires a 6-pin AND an 8-pin PCI-E. So make sure your PSU has what you need!

Overall Review: For anyone with problems with it overheating, EVGA has a program to manually adjust the internal fan speed! Default speed is 45% ran about 65 degrees idle. Kicked it up to 80% and now it idles at 55 degrees. Program is on their website, its called EVGA Precision.

Pros: This thing is a fricking beast so far. I've had no problems running any game on it so far, Everything runs so smooth and I haven't had a bit of lagtime with it yet.

Cons: Temp is a little high at roughly 65C

Pros: This card looks amazing, and fits into my 3D Aurora case. Plays all of my games on hishest settings, UT3 with 16Xq anti aliasing gets no lag whatsoever. I can't wait to run crysis.

Cons: Big, may not fit in your case, and if it does it will take some very serious manuevering. Runs at about 60-63 degrees celcius, 75 degrees under load.

Overall Review: Buy this card if you are looking for the best graphics you can get, in fact buy two. I'm hoping to get my second one in august

Pros: Great performance with latest drivers. Ordered 2 and they both fit on the board and in the case. Love the LEDs that show primary card and green indicators that show correct power connections.

Cons: They run at 70C idle! Installed a utility to adjust the fans to max. With 2 of these running at 100%, it sounds like a shop vac. Other con is price is high. Not many gains from my single 8800GTX I gave to my son.

Overall Review: Wish there were affordable water blocks for these.

Pros: This card can handle - it's really fast! Highly recommended if you don't want to worry about your graphics card's capabilities. This thing can probably max out any game you can throw at it.

Cons: It's large - had to take some elements of the case apart (3.5in bays, mounting system) to fit it in there. But in the end everything fit and it's great.

Overall Review: Got this for my Grandma, an avid WoW player in her 80's, as part of her new system. She's got it hooked up HDMI to her 30-something inch LCD TV - graphics are maxed out - and it's wicked. Absolutely wicked sick.

Pros: This card was pretty easy to install and maintain, and I had no problems handling it with my PSU or Motherboard. I'm planning on getting another and hooking it up to SLI.

Cons: OK, yes it runs rather hot. at 75% fan I'm Idling around 55-60C. Also, when you get the fan running high, it is louder than I'd like. Also, the drivers are not the best for this, as sometimes the driver fails and I have to wait 15 or so seconds before it recovers, there isn't any damage to my card or system, nor a reboot.

Overall Review: Overall, I wouldn't suggest this if you have a Mid tower case, as it probably won't fit or have good air cooling. Though if you want an amazing card that really cannot be touched by any other card, go for this.

Cons: Runs very, very hot. Overheats once every few hours if my room's over 70*F, causing a reboot. My case is a CM Stacker with a 120mm fan above it and a custom 90mm fan installed blowing air directly onto it from the side, but this isn't enough. I'm going to have to look into additional cooling.

Overall Review: Requires both a 6- and 8-pin PCI Express power connector. Blocks my Intel HD Audio Front Panel connector pin outs and I have to remove it if I'm going to remove RAM. Uses two expansion slots in space and almost runs over into the third one. Worth it if you like great graphics and either don't want SLI or want to be able to expand to SLI - just make sure you super cool your case.

Pros: The 9800gx2 has received some critisism over the past several months, I know many feal this card is nthing more than a prett 8800gts in sli. And that may have been true, before recent drivers. My KO edition is actually the second 9800gx2 I have purchased and now that I am running Quad sli, there really isn't anything that can touch my cards. nvidea is planing on releasing Physx drivers soon and I know my cards will stand up to the new programing.

Cons: I won't sugar coat it, these are hot. Plus they suck a lot of juice from my system. some 750w when I was running a benchmark. normal operating temps are about 65c idle and 85-90c load.