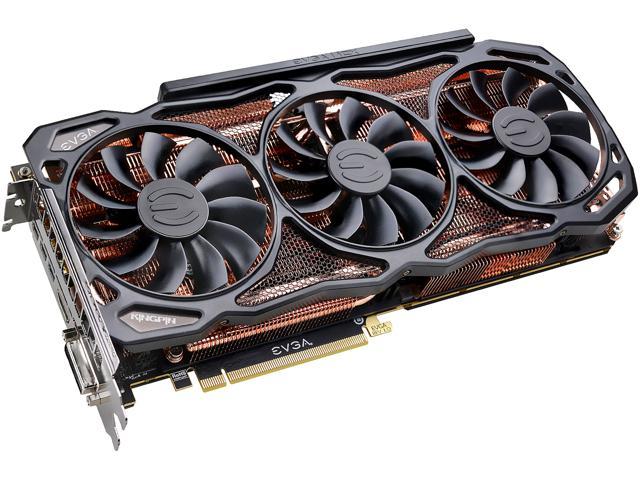 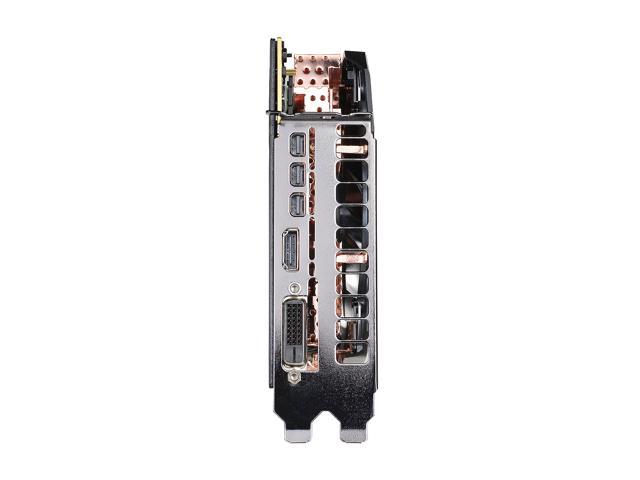 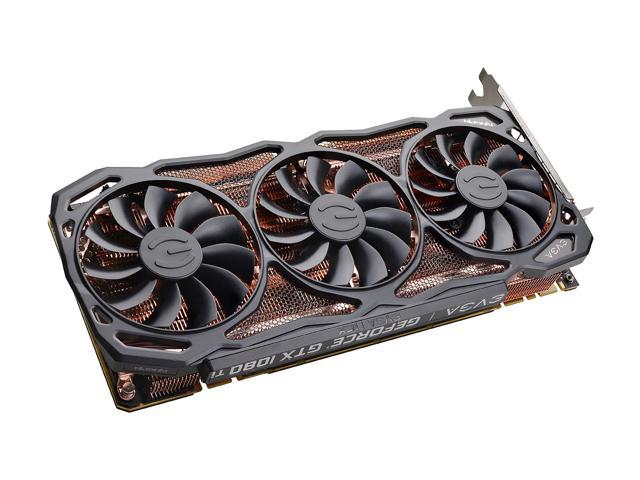 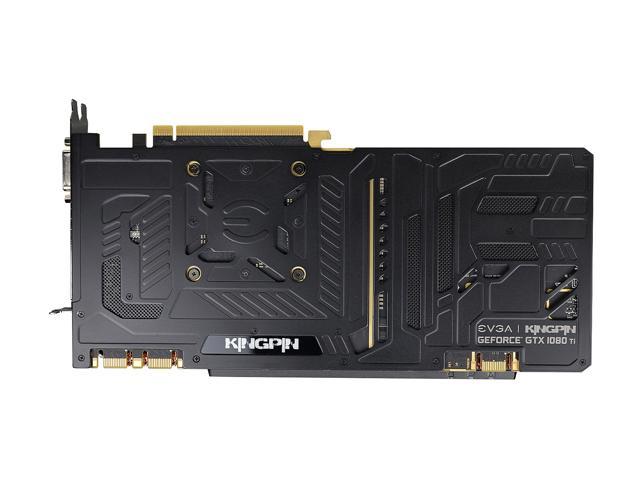 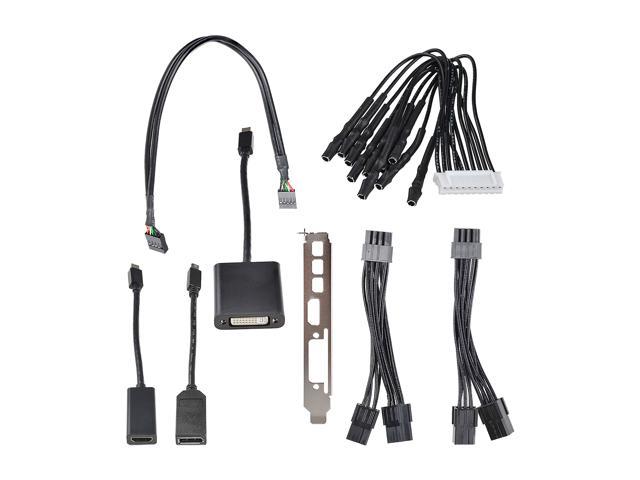 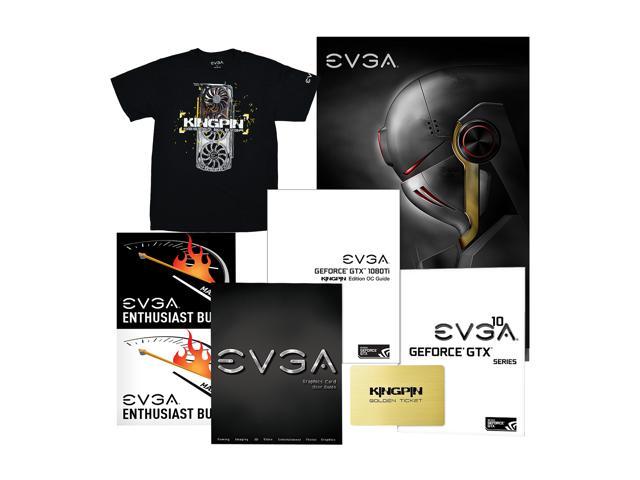 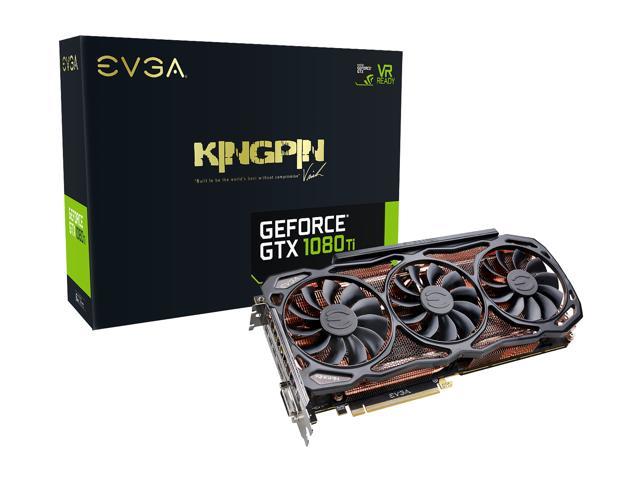 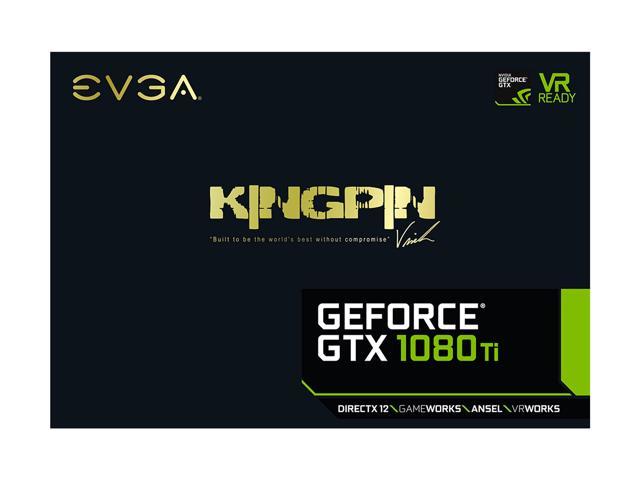 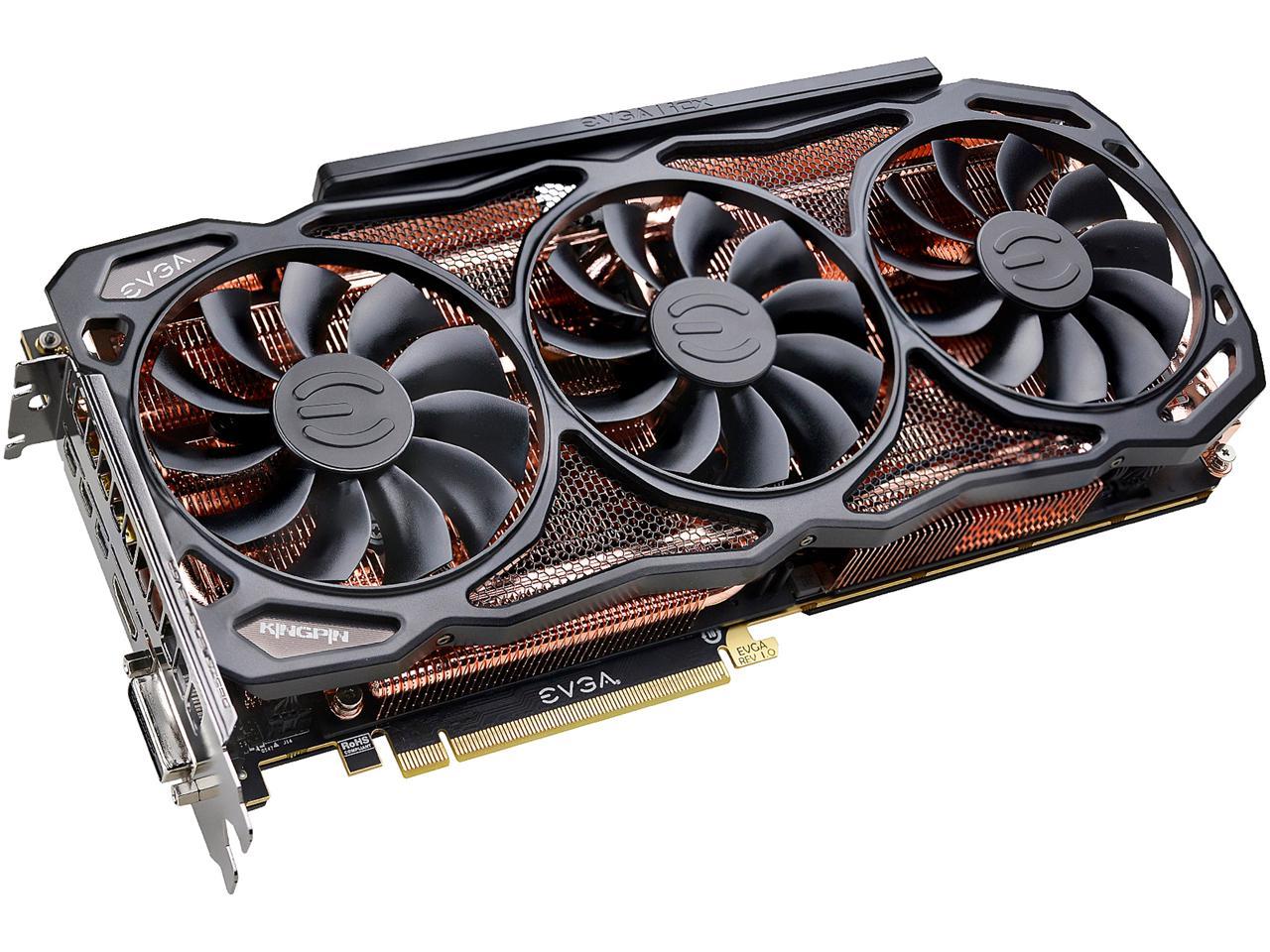 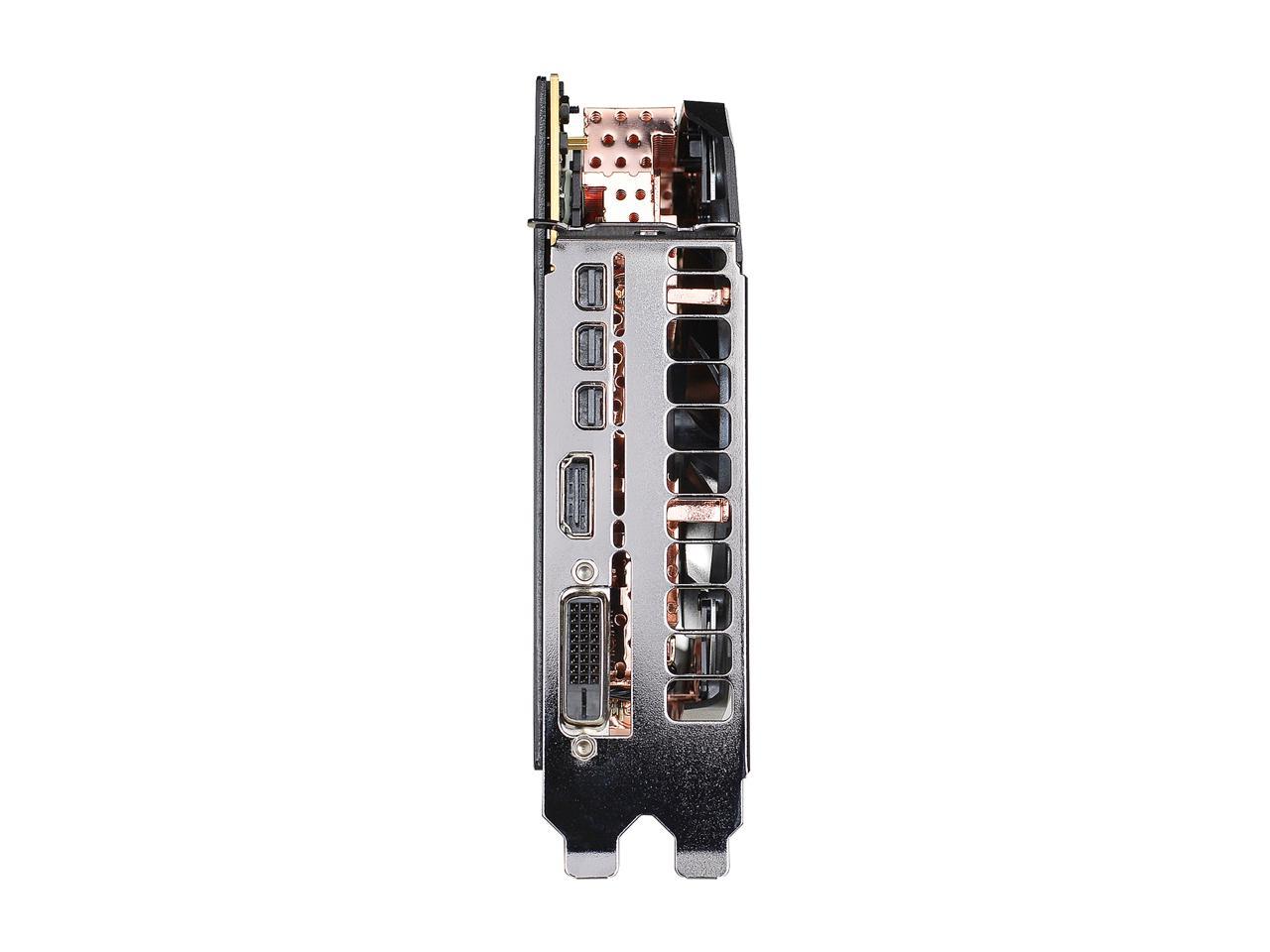 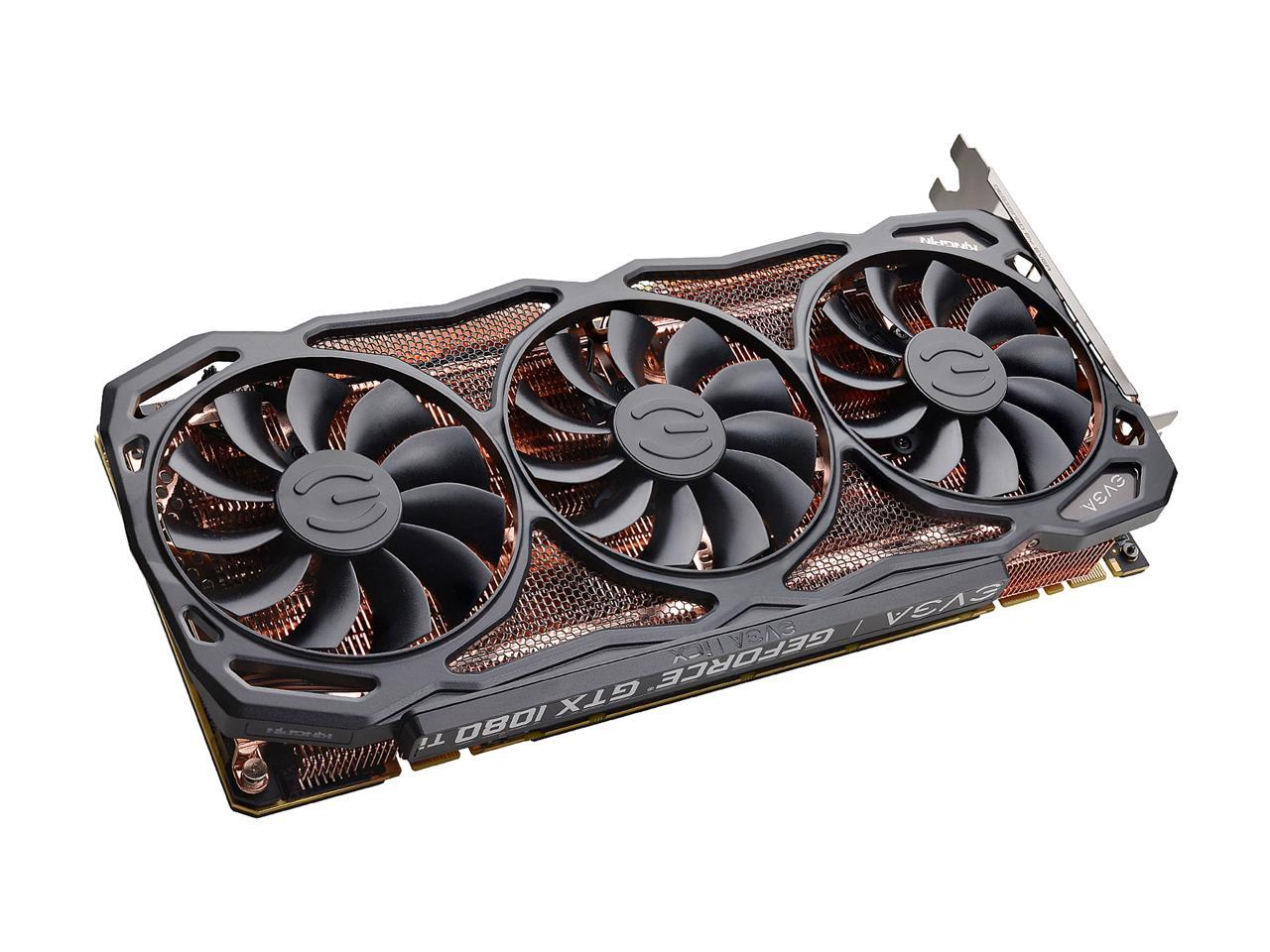 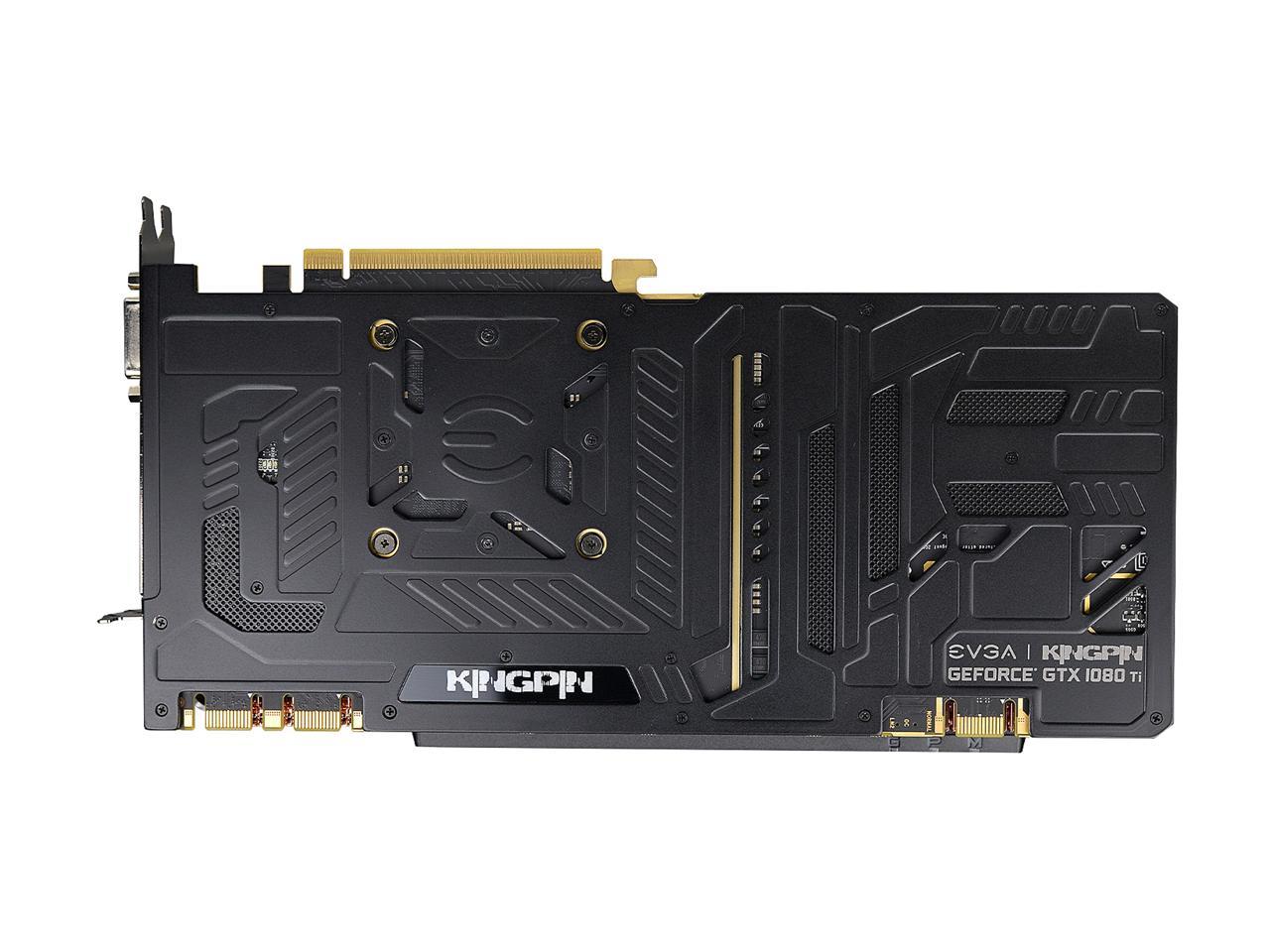 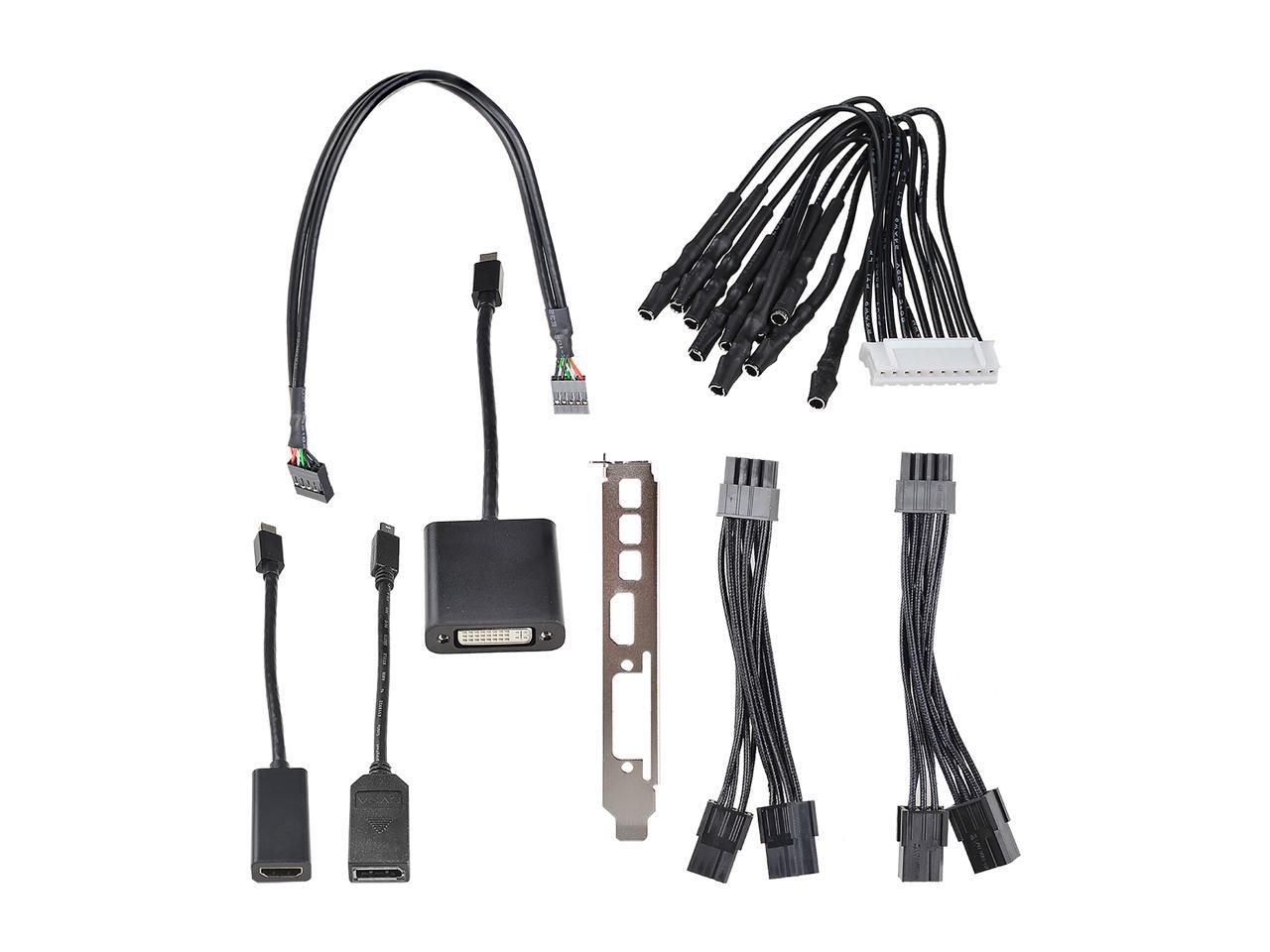 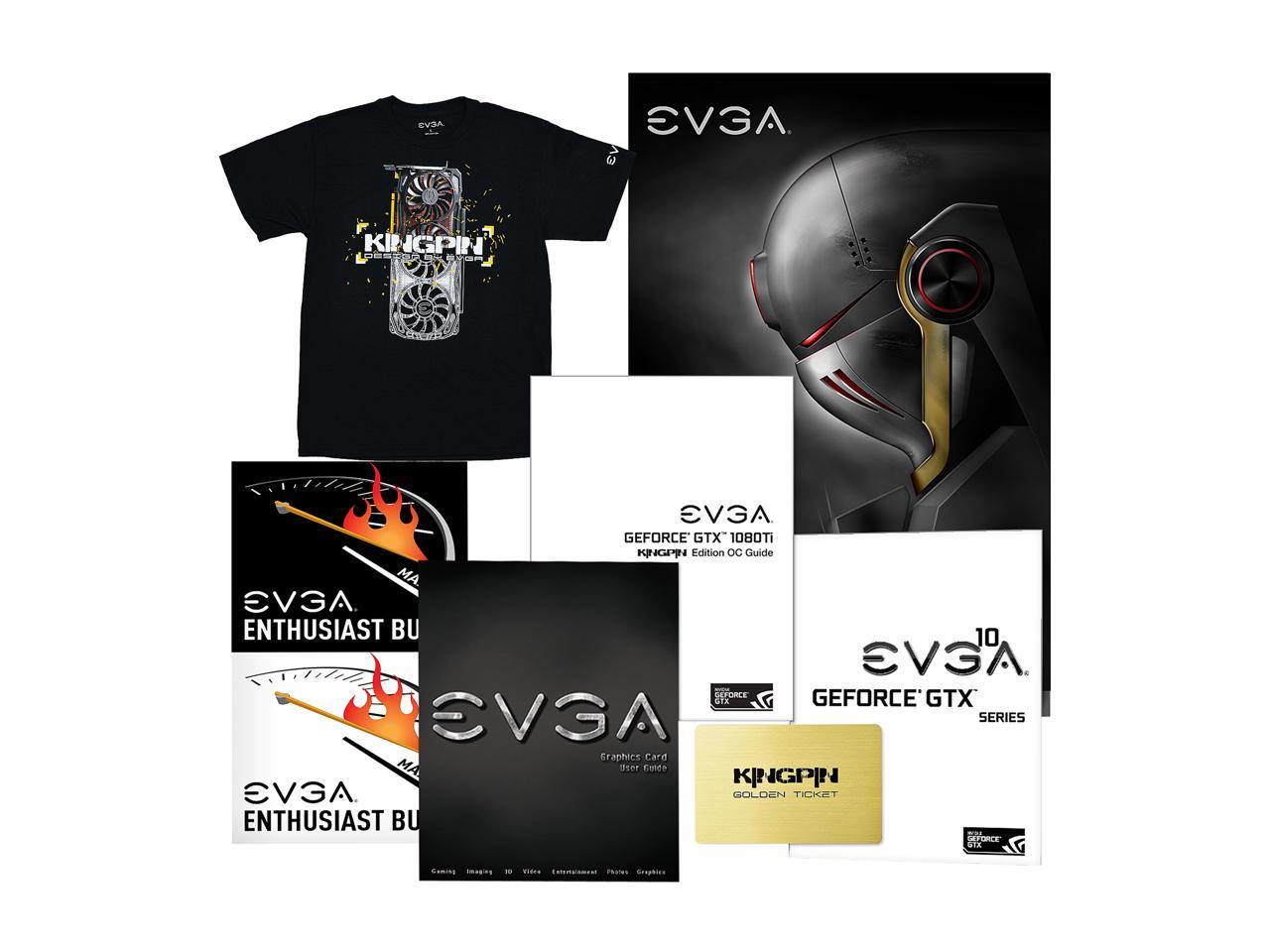 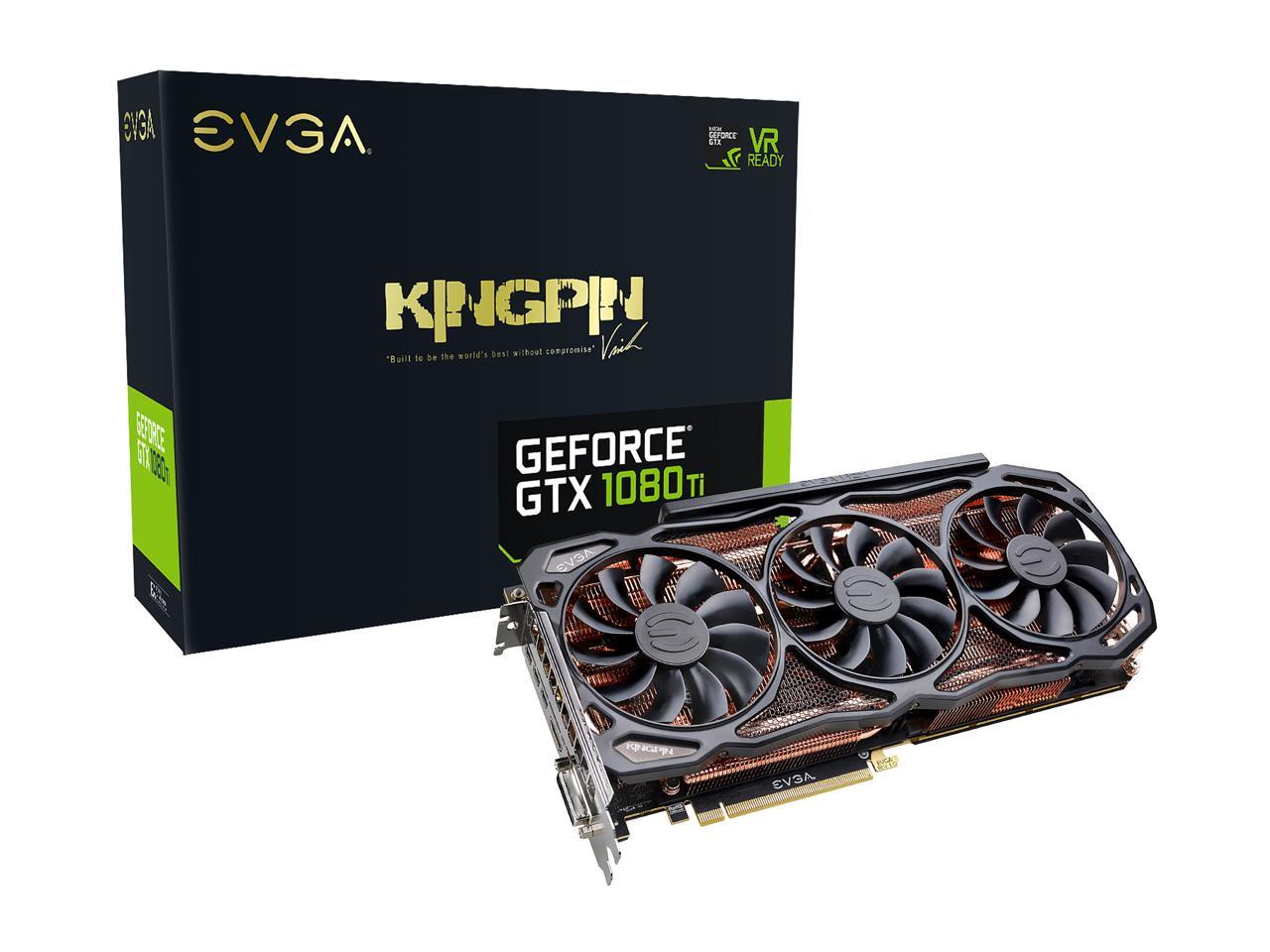 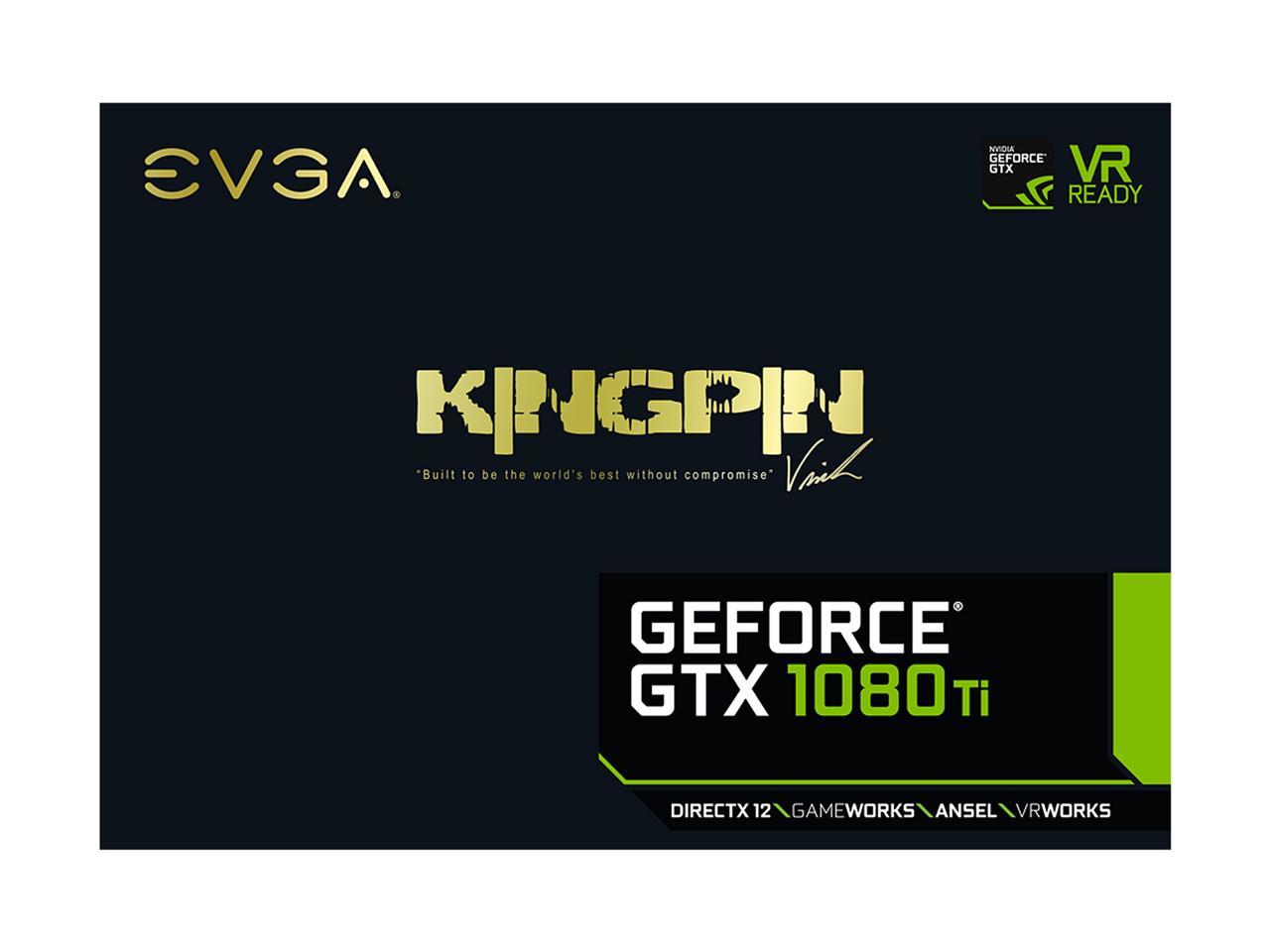 The Geforce GTX™ 1080 Ti was designed to be the most powerful desktop GPU ever created, and indeed it was. EVGA built upon its legacy of innovative cooling solutions and powerful overclocking with its GTX 1080 Ti SC2 and FTW3 graphics cards. Despite the overclocking headroom provided by the frigid cooling of EVGA's patented iCX Technology, the potential of the GTX 1080 Ti still leaves room for one more card at the top... and man is it good to be the K ⃒ NG. Featuring iCX Technology, a new efficient heatpipe layout, and dege-plated PCB for improved cooling, the GTX 1080 Ti K ⃒ NGP ⃒ N is ready to go from the moment you power on and also features:

EVGA'S K ⃒ NGP ⃒ N products are known for their distinctive appearances, and the GTX 1080 Ti K ⃒ NGP ⃒ N is no exception, featuring its unmistakable mark of quality and performance; Sync With Other Devices Pros: My card overclocks to 2,087 with temps around 58C (Ambient 22C) on air sitting on a PC test bench (DIY - no brand). My card has Zero Coil whine (using a EVGA 1000W G2 PSU)! I just purchased the waterblock from EVGA as well and I may report back after that is up and running. I love that the package includes a single slot bracket for the card. I am very happy with this card, I have a bunch of EVGA cards but this is my first KingPin. Other Thoughts: The two previous reviews say they (wonder if this is the same person for both reviews) have extreme coil whine. Mine has No audible whine.

Overall Review: The T-Shirt which is also included is awesome and I ordered myself a Jersey display case for it. Yes, I am a EVGA fanboy, always been. The reason behind is that EVGA customer service has been always exceptional to me. I appreciate to be treated well when I spend thousands on products from a company. Well done, EVGA!

Pros: The chip binning makes each 1080 Ti Kingpin be within top 80% percentile or so of overclocking. Although most Pascal chips perform similarly, you do get a higher chance of better overclocking and better undervolting+overclocking when buying a Kingpin. For gaming, it can be difficult to squeeze much more performance out of stock settings without stability issues due to stock 2025-2050 core clock and GPU Boost 3.0 occasionally trying to shoot up core clock to 2063-2088 when boost conditions are met. If having stability issues, strongly recommend using Voltage/Frequency curve in MSI Afterburner (accessible with Control+F) to prevent card from going above specific voltage (i.e. lower all frequencies beyond 1.05v to be identical to 1.05v). If you can't reach advertised guaranteed 2025Mhz core clock when overclocking, it qualifies for refund. The 2-slot air-cooler is very good, no regrets I didn't get a 2.5-3 slot. Very heavy. I put it in a small case with so-so ventilation. At 100% power limit, I get temperatures of 64-65c max, with stable +24 to core clock, 2063Mhz boost core clock at 1.05v. 1650 RPM fans, 59% fanspeed, slightly audible. No coil whine. Stable at +450 memory clock, unstable at 500. At 90% power limit, I get temperatures of 61-62c max, with stable +50 to core clock up to 1.05v, 2063Mhz boost core clock at 1.05v, and all voltages beyond 1.05v prevented by lowering their frequency below frequency at 1.05v (MSI Afterburner Voltage/Frequency curve tool, Control+F). 1420 RPM fans, 51% fanspeed, almost inaudible from 2 feet. No coil whine. Slightly better FPS than default settings due to less GPU Boost throttling, but feels like a bit worse min FPS, and core clock numbers less consistently high. The 1080 Ti PCB was built for LN2 record-breaking, which makes it possibly the very best 1080 Ti PCB for air-cooling or water-cooling (The FTW3 Elite has 12Ghz instead of 11Ghz memory stock, so that may actually be the best PCB). The over-built components ensure they will never get in the way of normal gaming overclocking, and the gold-plating reduces temperatures by a good amount, so the Kingpin has the 1080 Ti PCB for coldest air-cooling and water-cooling temperatures as well. I am keeping it in stock form since I want to use it in a very small form-factor case without water-cooling (don't want to deal with water-pump noise or maintenance), but it reaching 61-62c at my current settings does result in less consistent FPS and less stable overclock-ability than I have seen with hybrid 1080 Ti. Putting a water-block on this would make it have superior temperatures than any other 1080 Ti PCB options thanks to the gold-plating, which can be important since Pascal is sensitive to temperature when it comes to consistent high FPS and overclock stability. Comes with t-shirt with a 1080 Ti Kingpin on the front. Fancier box than EVGA's usual boxes.

Cons: $200 premium over most other brands' top-of-the-line cards. Most of that cost goes towards making the card ideal for LN2 record-breaking and binning the chip. Does not have 12Ghz memory like FTW3 Elite (not FTW3) 1080 Ti's. Does not have as low temperatures or as low cost as AIO hybrid 1080 Ti's, and because of that, probably has worse stock vs. stock performance. Once you add on the cost to put this on a waterblock, the cost gets into Titan X territory.

Overall Review: I consider the cost of components/manufacturing and the amount of research that must have gone into designing the PCB and air-cooler, make the price premium more than well-worth it, even if it might not scale well in terms of cost/performance. It is especially worth it to me because I needed a 2-slot air-cooled 1080 Ti to fit in a small mini-ITX case. Get it if you appreciate very well-engineered 1080 Ti, bit of chip binning, quietest air-cooled 2-slot cooler, don't mind a big price premium to make the ultimate water-block 1080 Ti, or (of course) want to do LN2 record-breaking.

Overall Review: I've gone through quite a few 1080 Ti's since they came out. I wanted one that was going to push the limits. I started out with the Asus Strix and that card wouldn't Oc past 2000 MHz on air so I took it back for an Asus Poseidon. That card would hit 2032 or so then down clock as the temps went up, and the waterblock wasn't all the great. I finally found this card is stock on newegg and decided to pull the trigger. WOW. I was super impressed. Out of the box it hit 2032 without a custom fan profile and didn't break 70 C. With a custom profile I hit 2075 and only down clock to 2050 with fans at 60%. and I can barely hear it. Now this card does have a lot of Coil whine, but if you look on the EVGA forums you'll see that all of them seem to have it to one degree or another. My coil whine went from louder than the fans to barely audible after about 3 hours of benchmarking. Another point is that this card is very expensive and has a lot more on it than a normal card. By that I mean, all the extra voltage controls as well as having more control over your higher overclocking numbers. If you are not planning on at least watercooling this, then save up an extra $200 and get the Titan Xp; or better yet save a few hundred and get a 1080 To model of your choice and water cool it. You'll get the same results. This card is not for the everyday gamer. All in all this is the bast card I have ever owned. I love doing benchmarks and when I can get a water block, i'm going to be trying to get to the top of the leader boards.

Overall Review: The two previous reviews say they (wonder if this is the same person for both reviews) have extreme coil whine. Mine has No audible whine.

Pros: Quality, Quality, Quality. Right from the feel of the outer box, to the magnetic latch, to the 6lbs of copper heat-sink, everything about this video card just screams high-end. 2050MHz was easy to achieve.

Cons: This card is **heavy** Consider mounting this beast vertically (If your case supports it)

Overall Review: If this card is such a quality beast...why does it only get 4/5 eggs? Well... There is a golden ticket inside the box. For an entry into a contest. ...The contest closed Dec 20, 2017. It gets your hopes up, like when young Charlie finds the golden ticket for a tour of Willy Wonka's chocolate factory. But then squashes all your dreams when the contest is closed. It leaves your feeling very salty. -1 egg!!!

Cons: Has the lifespan of an insect. I have had two of these cards, and they both have failed. The first failed after 1 year, and the second failed after only 2 months.

1 out of 2 people found this review helpful. Did you?
Manufacturer Response:
Dear Valued Customer, I do apologize for the troubles you are having with your EVGA GTX 1080Ti graphics card. I can assure you that we are here to assist and support you as best we can. If you haven't already done so, then I would encourage you to contact our 24 hour Technical Support team by phone 1.888.881.3842 and pressing option 1 or by email: Newegg@EVGA.com with your reference# 3363964 so that we can further assist you. Sincerely, EVGA Customer Support
Anonymous
Ownership: 1 day to 1 week
Verified Owner
Garbage with Coil Whine.9/28/2017 3:24:26 PM

Pros: Seems to be none.

Overall Review: Waste of money stay with FTW3 and save the $200.00. This is all about the GPU lottery.

6 out of 25 people found this review helpful. Did you?
Manufacturer Response:
Dear Valued Customer, I do apologize for the troubles you are having with your EVGA GTX 1080ti Kingpin graphics card. I can assure you that we are here to assist and support you as best we can. If you haven't already done so, then I would encourage you to contact our 24 hour Technical Support team by phone 1.888.881.3842 and pressing option 1 or by email: Newegg@EVGA.com so that we can assist you. Sincerely, EVGA Customer Support