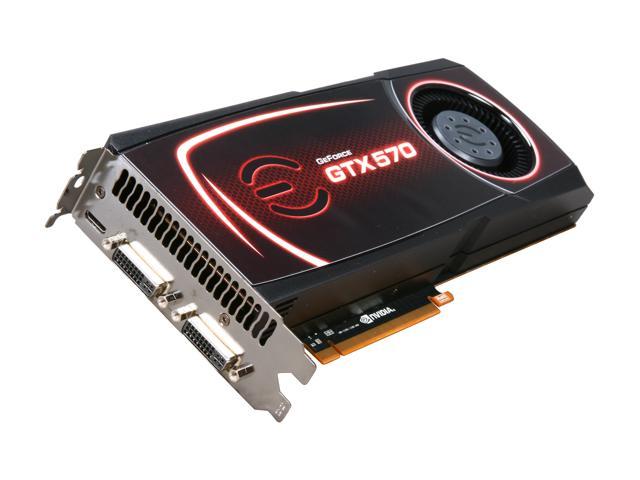 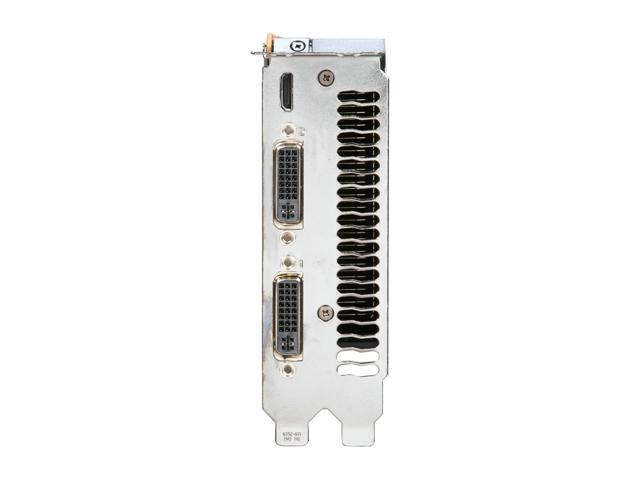 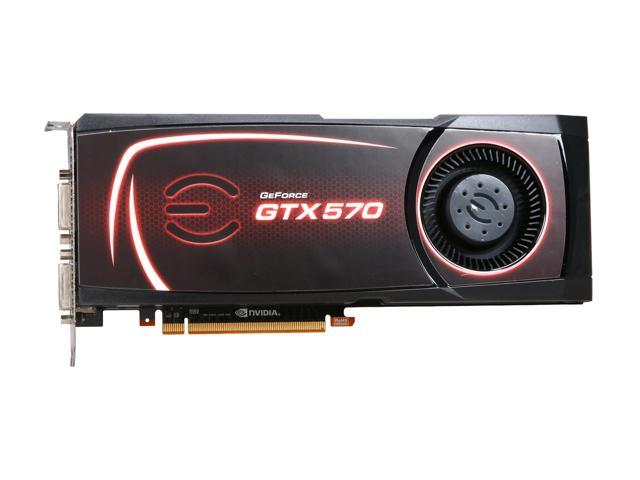 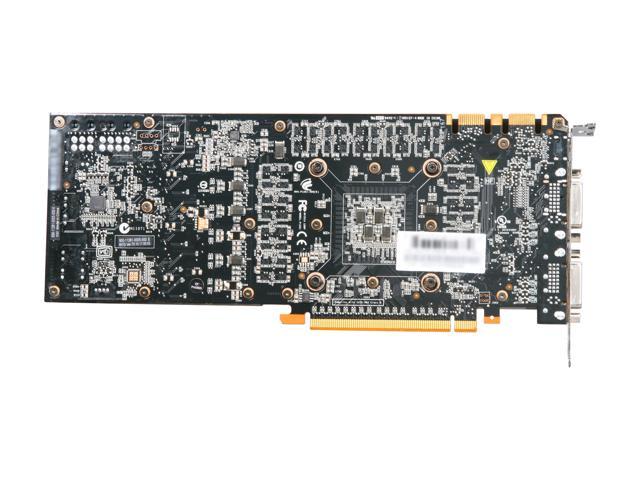 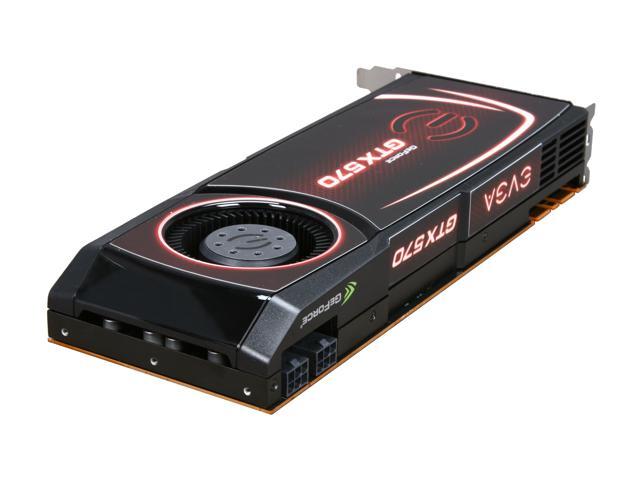 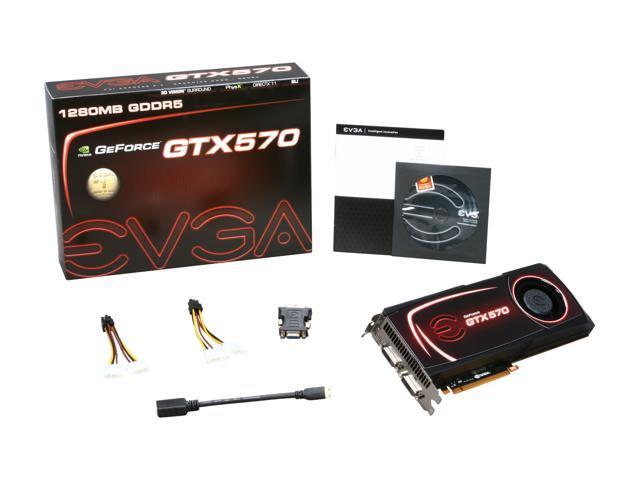 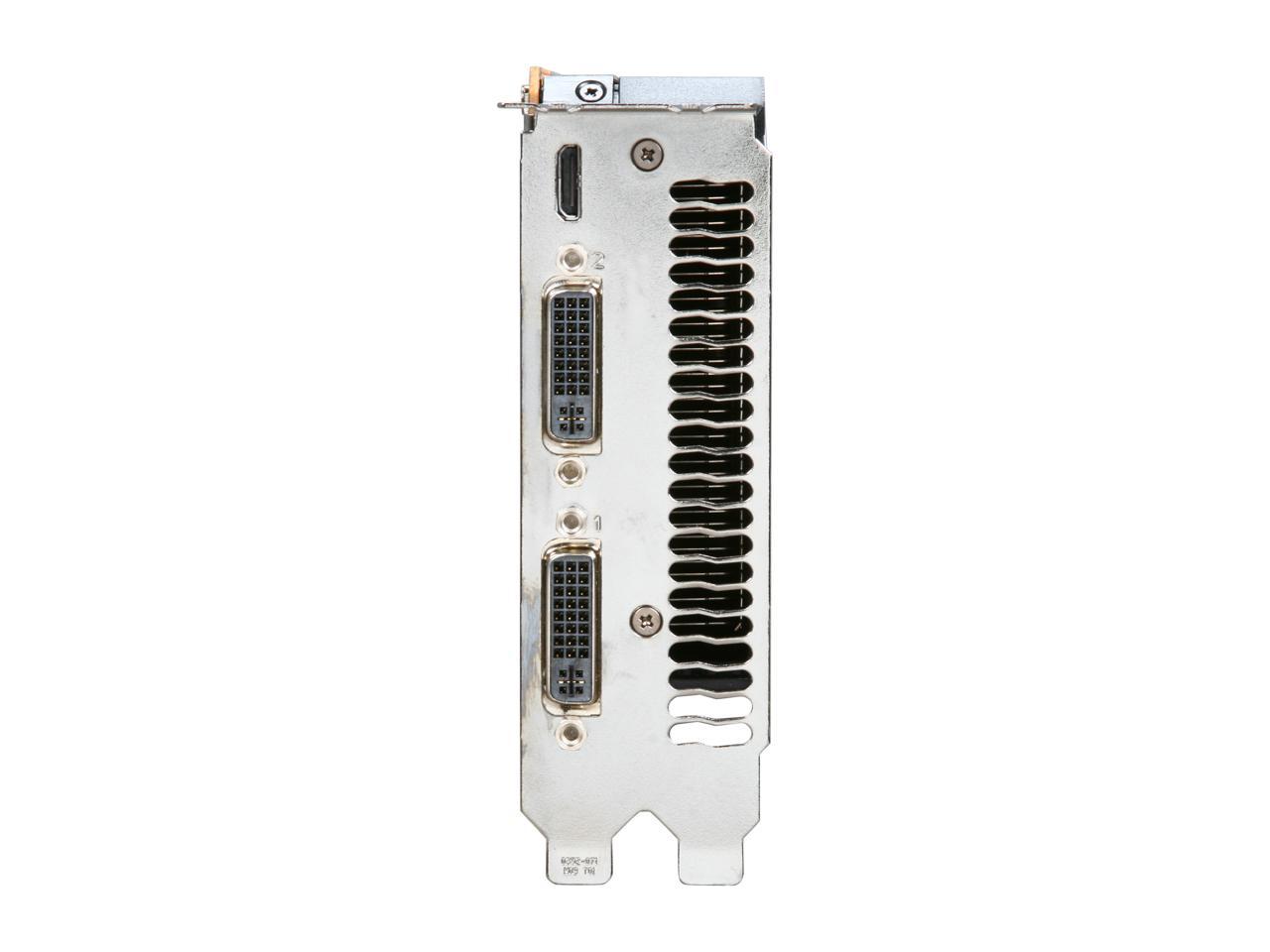 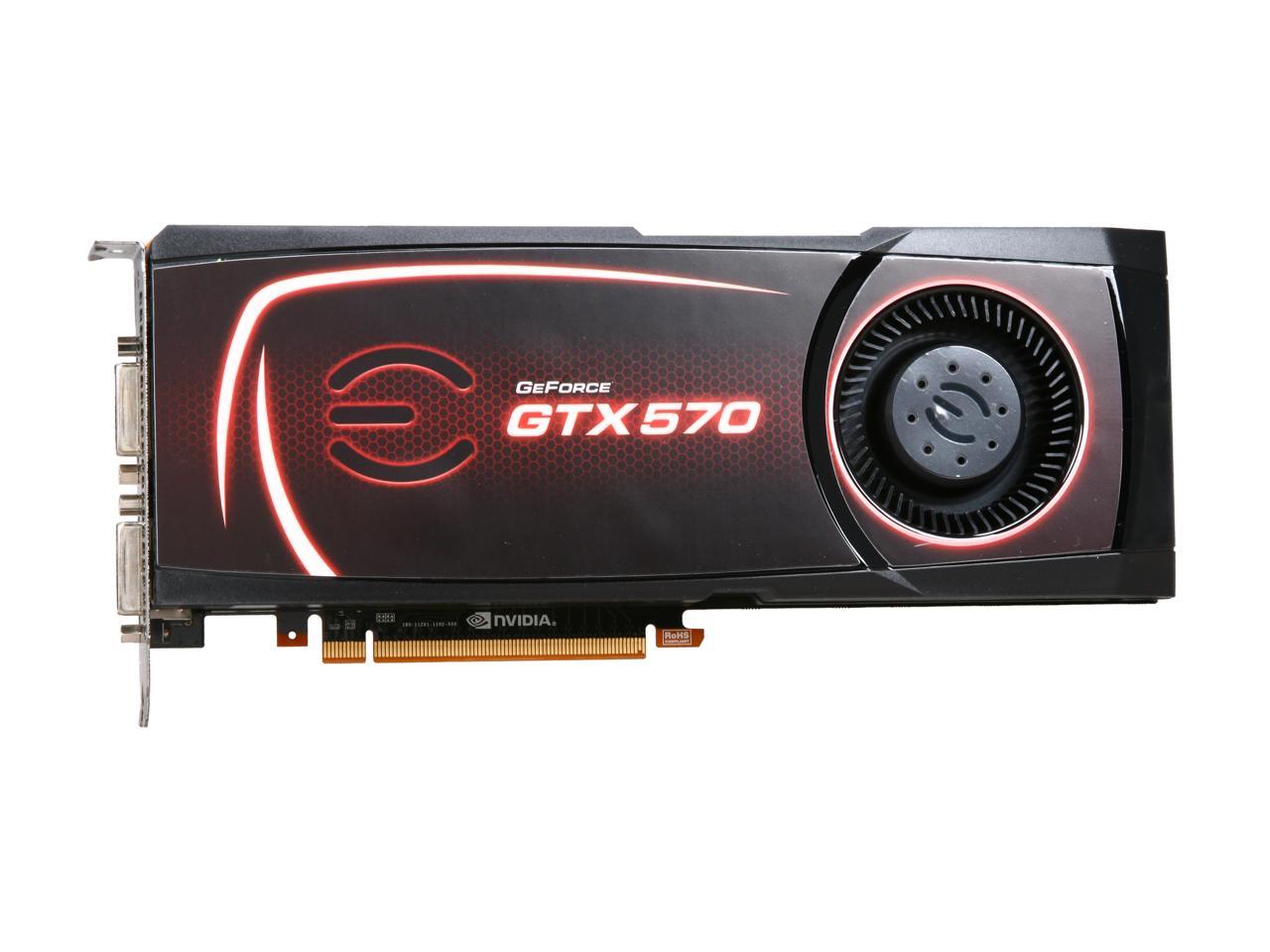 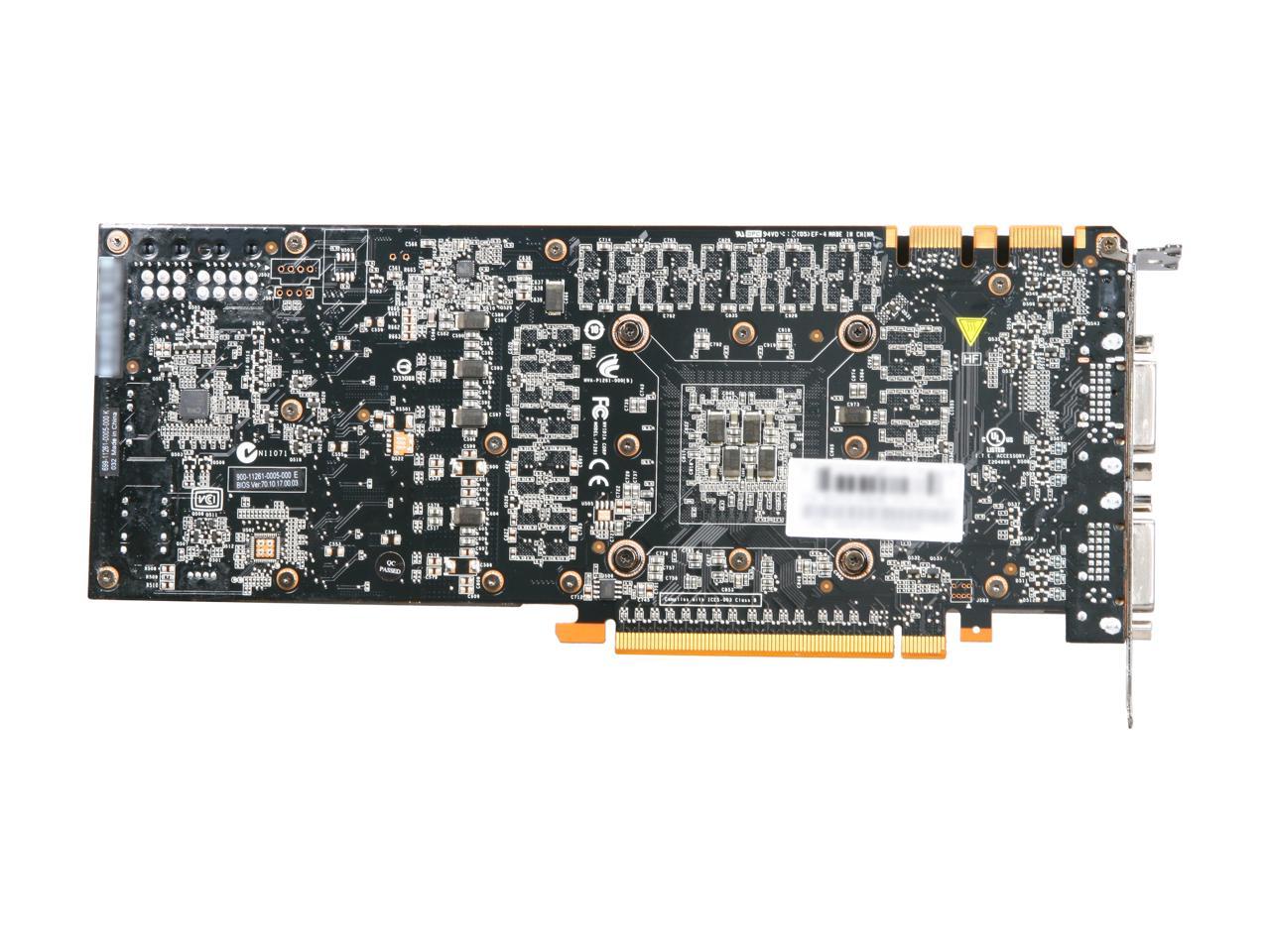 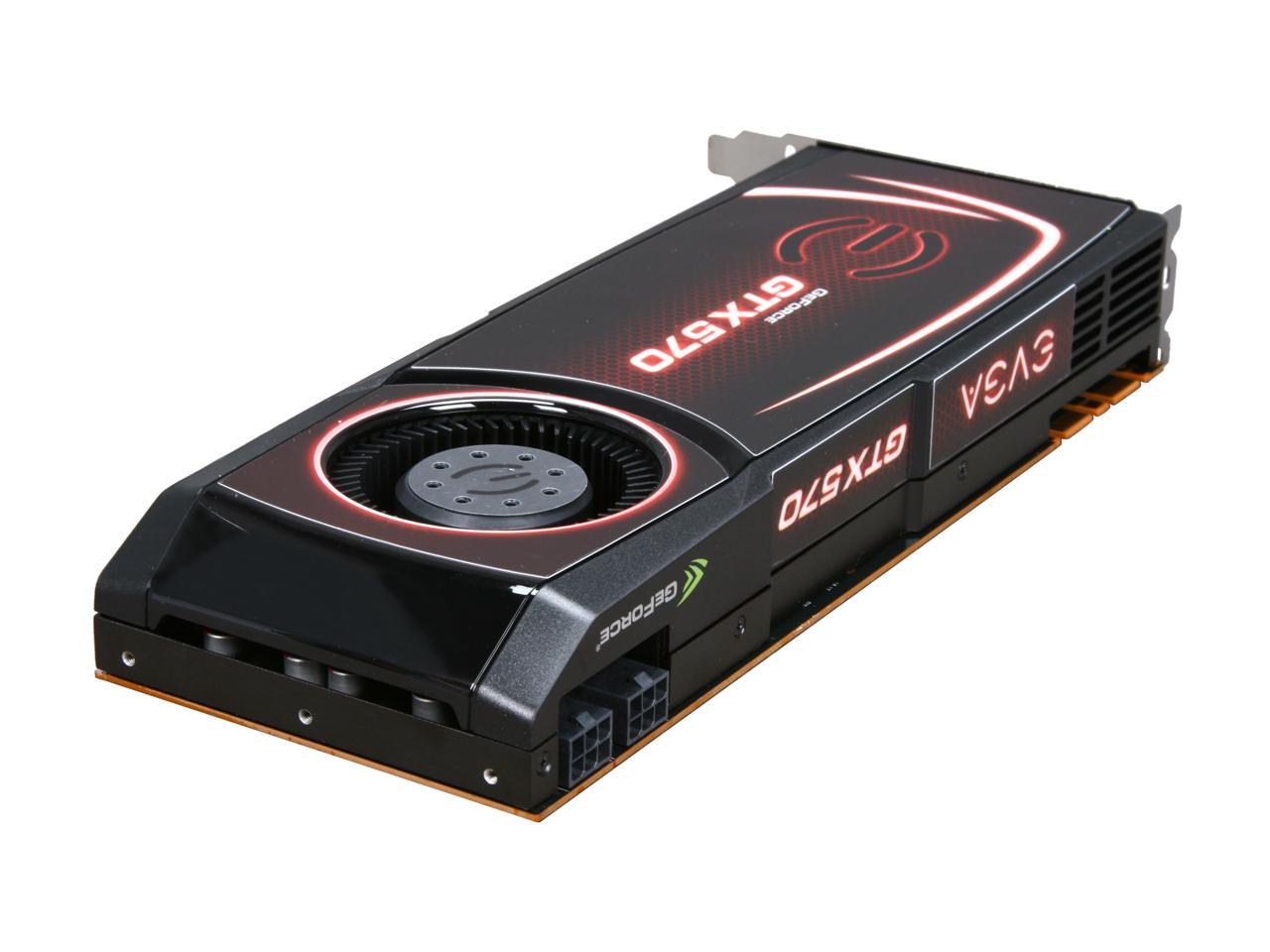 Pros: Got this card hooked up to a 42" s0ny Br@via. Works great at 1080p res. No complaints from my upgrade because I no longer have to worry about sli profiles and lots of crashes with SLI. *Puts out WAY less heat than the sli 285s..this is the major reason I purchased this 570. *Games that make heavy use of GPU power benefit off of a powerful single card. *Temp does NOT exceed 70C. (285s would each hit 76C, that literally makes them a nice convection heater) *GPU fan is much quieter thanks to its new vapor chamber technology. *DX11 tesselation is a nice bonus and makes games look great. *Of course dont forget to register for EVGA's limited lifetime warranty. The first thing that I did when i opened up the box.

Cons: *Lower minimum framerates with AA on. Scenes with alot going on would bring my 285s with 4xAA down to about 50 fps..the 570 handles 4xAA pretty well but it goes down to 40fps. A noticeable difference, but really no need for 4xAA unless you'r obsessed with having high everything settings. *EVGA's 570 does not allow too much OC potential thanks to their cheap 4-phase Volt Regulator Module vs their competitions gpu's sporting 8-phase VRM. ---I have about a 3-5% OC depending on the game. No problems so far.

Overall Review: I must note that some people do not feel that upgrading from SLI cards to a 570 or 580 is worth the extra dough, but the temperature in my room went from stuffy to comfortable with the upgrade, and I still max out most games graphics..No complaints from me. Not to mention that if I so choose in the future, I can always pick up another 570! Intel i7 920 @ 3.8GHz OCZ Vertex2 60gig SSD COOLERMSTER Hyper 212 CPU fan. 3 CHannel ocz memory @ 1600MHz(7-7-7)

Pros: -Lifetime Warranty -Manufactured by EVGA -Ultra settings for whatever game you can throw at it. Crysis 2- 89 fmps.... enough said.

Cons: -Registering for the lifetime warranty is a bit of a hassle because you have a very limited time frame to get it.

Pros: On stock clock and voltages, I was able to play BF3 maxed out with low AA no problem. I had expected that. But I did not expect over clocking to 860mhz, memory to 2100mhz and voltage at 1113mv would now only allow me to play Metro 2033 on max settings, but the temps also stayed at 81C or less. For such a demanding game and a case that is lacking proper airflow right now... I'd say that's pretty good. The card is decently quiet too. I run all my games with fans at 70% and can't hear it over my speakers.

Cons: A little long. But that was expected. Any fan level above 70% is also very loud.

Pros: excellent card, I've had no problems with it. I got this card to replace my old GTX 275 because it wasn't able to run games with the Nvidia 3D Vision turned on at an acceptsble framerate. The GTX 570 does this with no problems. The biggest thing I was surprised with was the temperature - it's about 7C cooler than my old GTX 275 running at an idle temp of 46C and the highest gotten it is to 74C. It's a bigger, better card with more memory and more everything, also higher power consumption - and yet it runs cooler. The two cards are similar in design in terms of cooling, so it must be simply better design is all I know. Also the GPU fan is more quiet than my old fan. Not that the GPU fan ever that loud, but this one is particularly quiet and is not even all that loud at 100% speed. I couldn't be more pleased, best thing I've bought for a while.

Cons: Not a lot to speak of. It's big, if you've never had one of these cards, know that it's huge. The measurements are listed in the specs here, so measure out on paper the length and width of this card and compare that to the inside of your case. Also keep that the power connedctors are on the side facing away from the motherboard on the front corner. It's also not the GTX 580. The 580 is the "big daddy" of Nvidia cards right now and this card isn't it. This card is a heck of a lot cheaper than the 580 and I'm sure that in terms of practical usage this card can do anything the 580 can do, but it is not as powerful, it's not the biggest baddest card money can buy. EVGA's model is pretty much identical to the reference model, with the plastic and metal enclosure to vent heat out of the back instead of radiating it into the case. Some overclock junkies prefer against this. For one thing this is partly what makes the card so darned big, and it doesn't fit in well with some cooling s

Overall Review: I always try to mention EVGA's tech support when I review EVGA products. I didn't have to call them for this card, but I have before and their tech support is the best I've ever known. I work in IT and I call tech support for lots of companies all the time, and none are like EVGA. They also have that step-up program where you can trade in your card within 90 days - this is in case they come out with a GTX 575 or something and you're stuck with an outdated model just a few weeks after it's brand new. That can and does happen, and EVGA has insurance against it.

Pros: Fast. Quiet (so far) Cool. SOOOO much better than the dual 9800gtx+ cards i had. The size didn't phase me. These (i got 2) fit nicely in the new build. The case i went with is the AzzA Hurrican (coulda added the e...) so the cards fit with more than enough room.

Overall Review: I've been an evga fan for quite some time and have been more than pleased with them. I had a 280SSC a while back that needed rma'd twice but never got fixed until recently when i sent the head tech support guy an e-mail. He sent me a prepaid label to send my card in and in return they sent me a 470 to replace it.

Pros: Quite an Increase in performance coming from a 9800GT. Doing an informal comparison pre and post install Frame rate increases at 1920x1200 with max detail (AA is off) have been as follows. BFBC2- 200% increase Borderlands- 136% increase (guessing this is due to my CPU) Crysis- 252% increase GTA IV- 291% increase Just Cause 2- 284% increase (with cuda water) Metro 2033- 303% increase (DX10) Red Faction Guerrilla- 263% increase Stalker: Prypyat (DX10) 222% increase Proof is in the pudding here. If you are on the fence and you have a 200 series or older, you are definitely going to see some serious improvement. Did I mention this thing is quiet? At max load this thing is quieter than my 9800gt idle. Very happy with this purchase! Thanks EVGA and Newegg!

Cons: Not really a con, but card is much bigger than the 9800GT i had. With a mid tower things can get tight.

Overall Review: I have an older system at this point as cash has been short. Wont be upgrading my Mobo, proc, ram untill fall 2011. Never the less I will be amazed at what this card can do when I get it hooked up with an I7. Right now running: Core2quad Q6600 stock. 4gigs ddr2 Antec 650w power. EVGA GTX 570

Pros: Awesome video card, owned for more than a year and no issues whatsoever. Easy to download updates. Can handle any game I play ie BF3, MW3, SWTOR, all at max video settings with no lag :D

Cons: Can't think of any

Overall Review: Can handle pretty much any current popular game. You don't need to spend a bajillion dollars on some crazy video card, this one is fairly priced and meets the demands of every game I play

Pros: Runs like a champ, improved my experience beyond my wildest imagination and at the price it's a steal. It's quiet, pushes the heat out the back like good components are supposed to and has turned the most demanding sim I've ever played, Silent Hunter, into a silk smooth experience of pure joy. My 260 was amazing considering its age, but this card is mind-blowing.

Cons: So far none, but I'll withhold judgment until I've seen how it performs over time. I'm not pessimistic, though, as the 260 has never failed me through almost three years of service and it was an EVGA too.

Overall Review: There are better nVidia cards out there now, but I settled on this one because it fit my current box perfectly both in power requirements, physical dimensions and everything else. When I decide to go up another notch I'll be rebuilding my rig again from the bottom up. But if you're a current owner of a card like my old one (GTX 260) and don't want to have to bother with anything other than pulling out the old one and putting in the new, you can't go wrong with this baby.