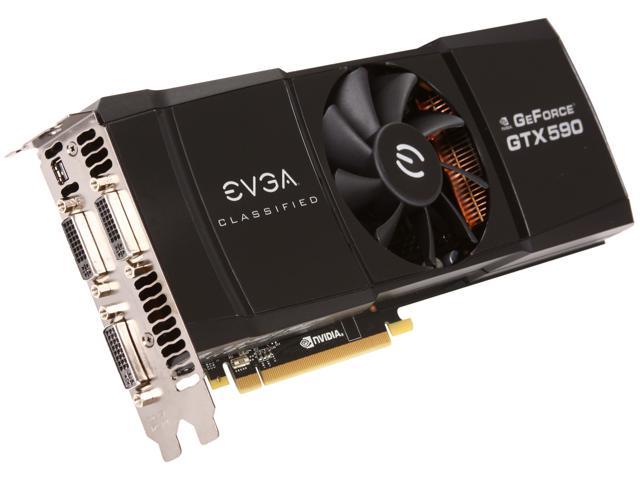 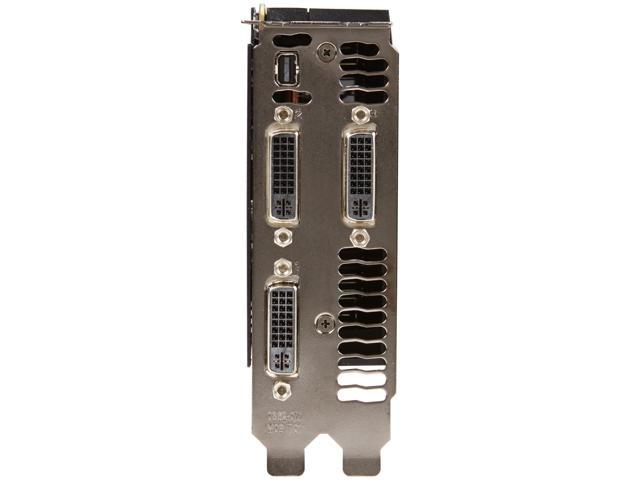 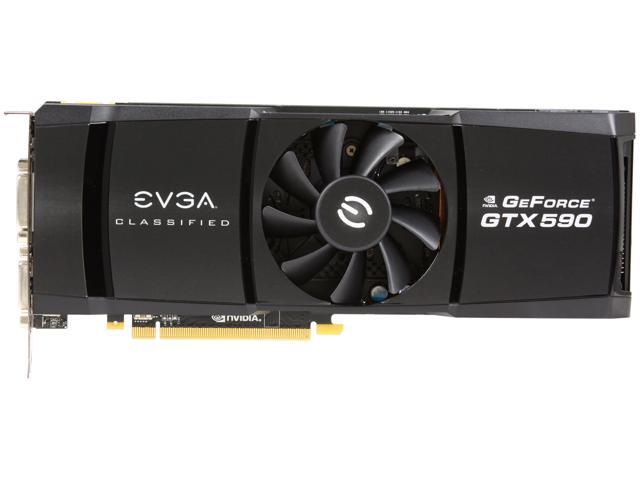 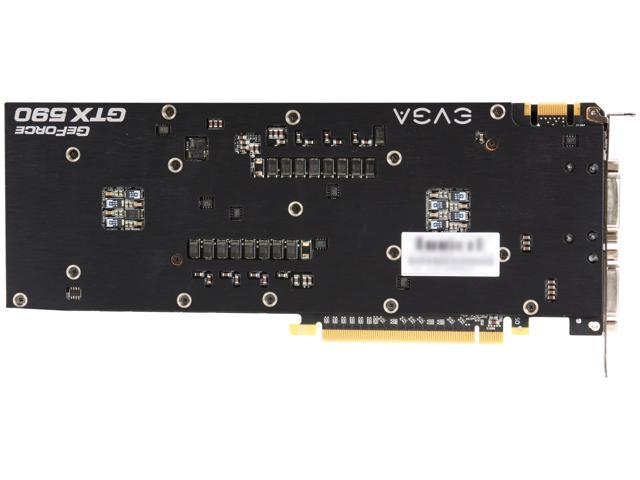 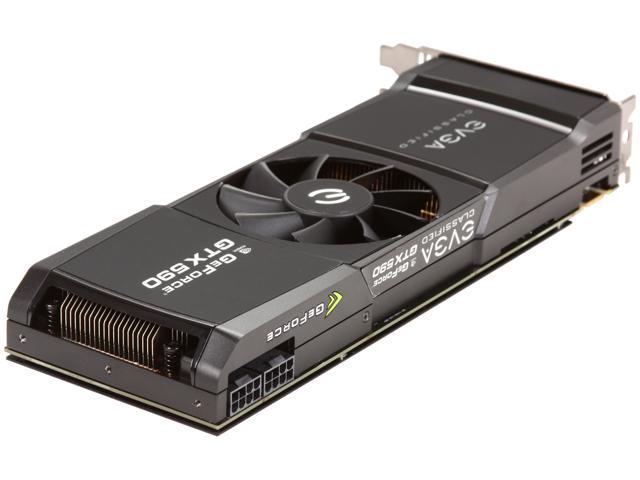 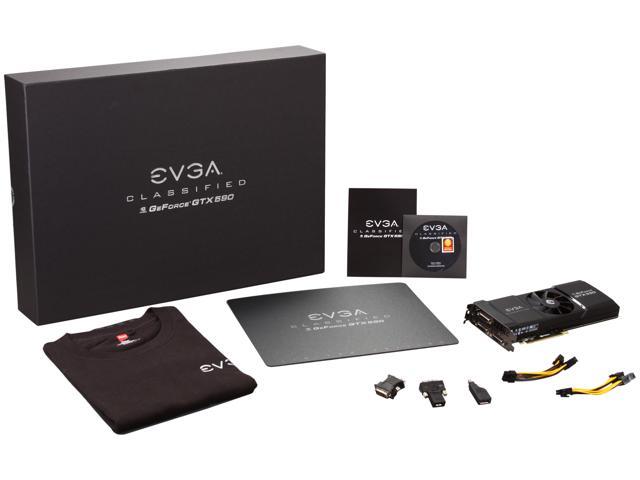 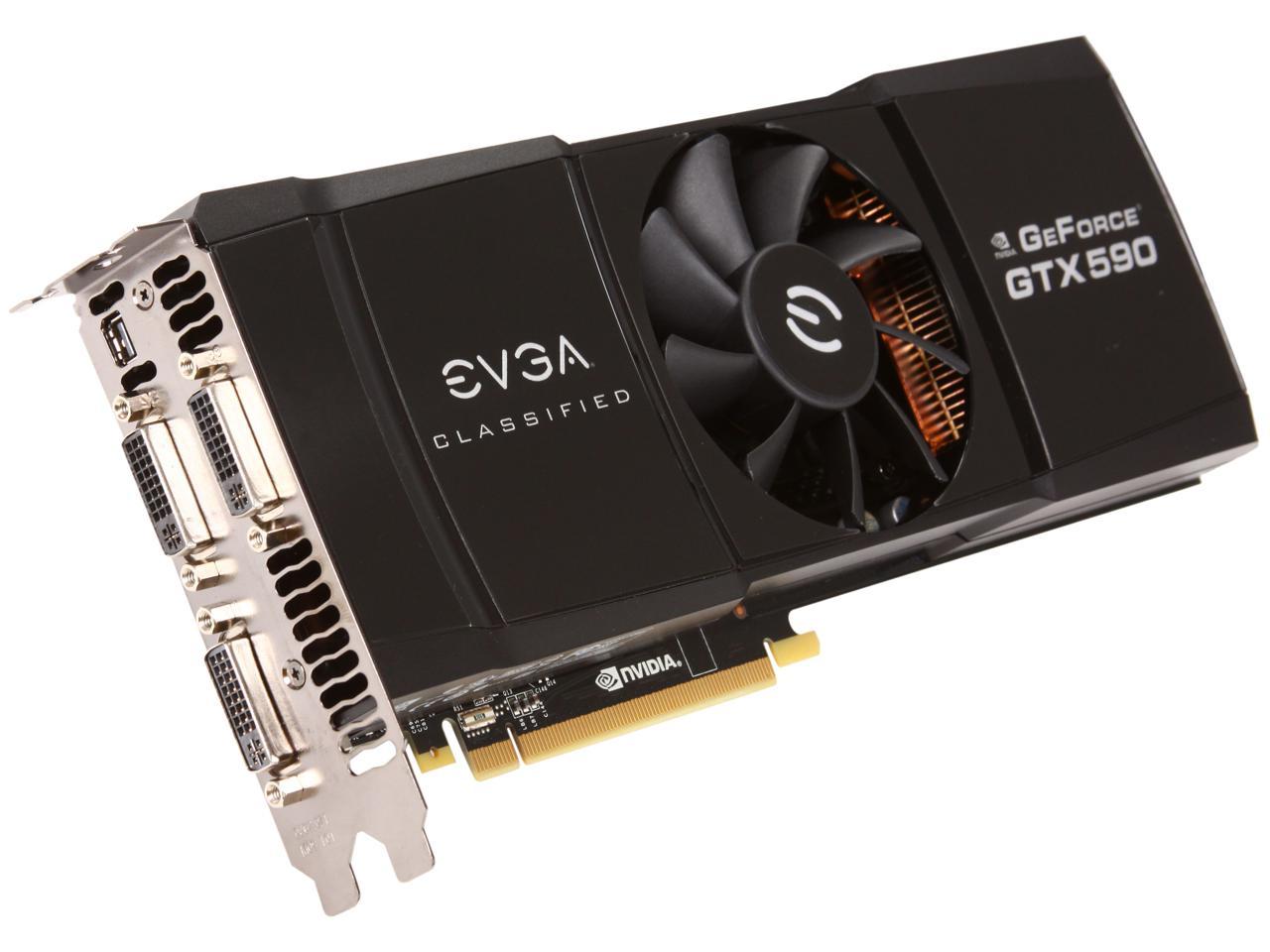 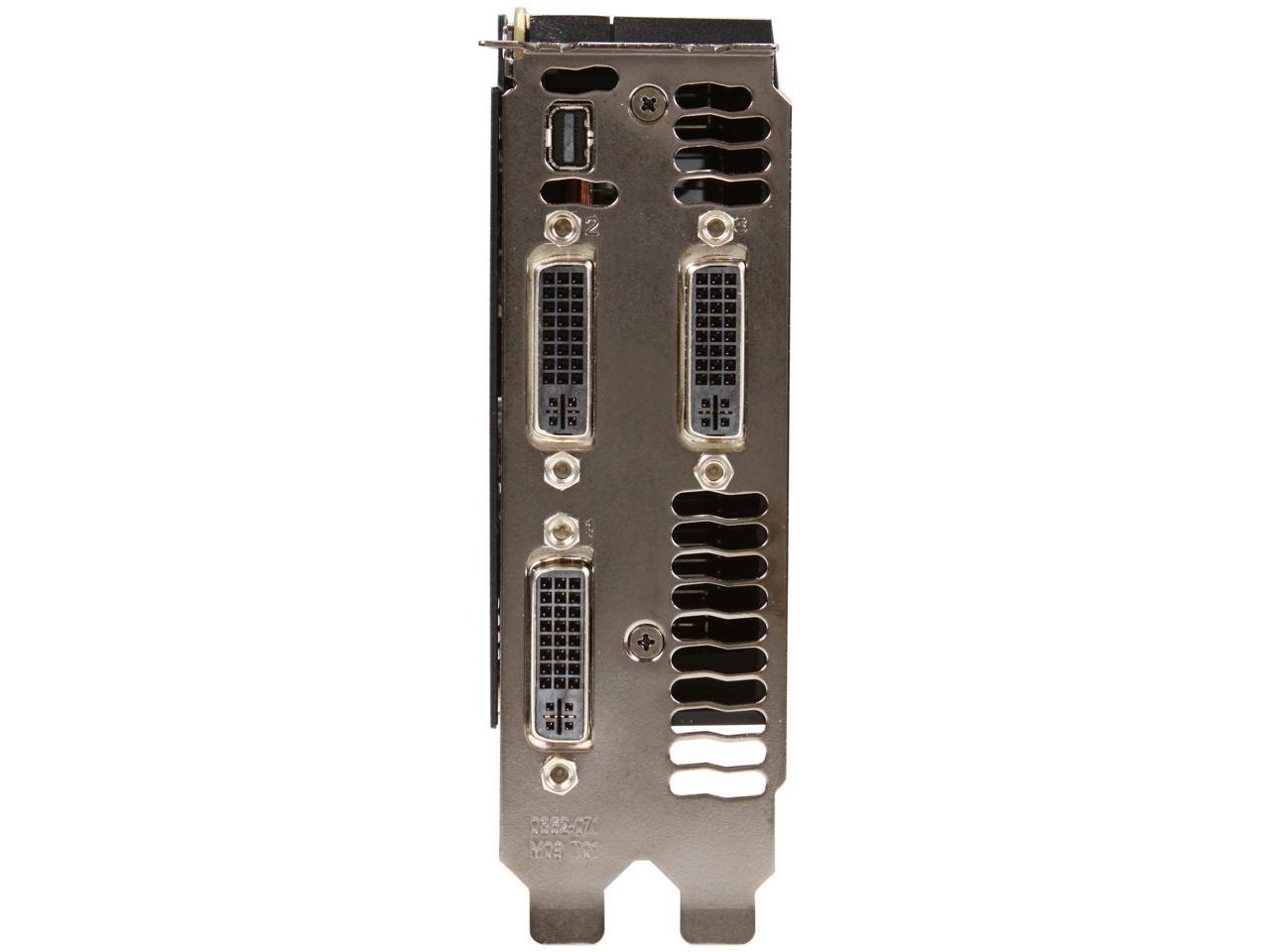 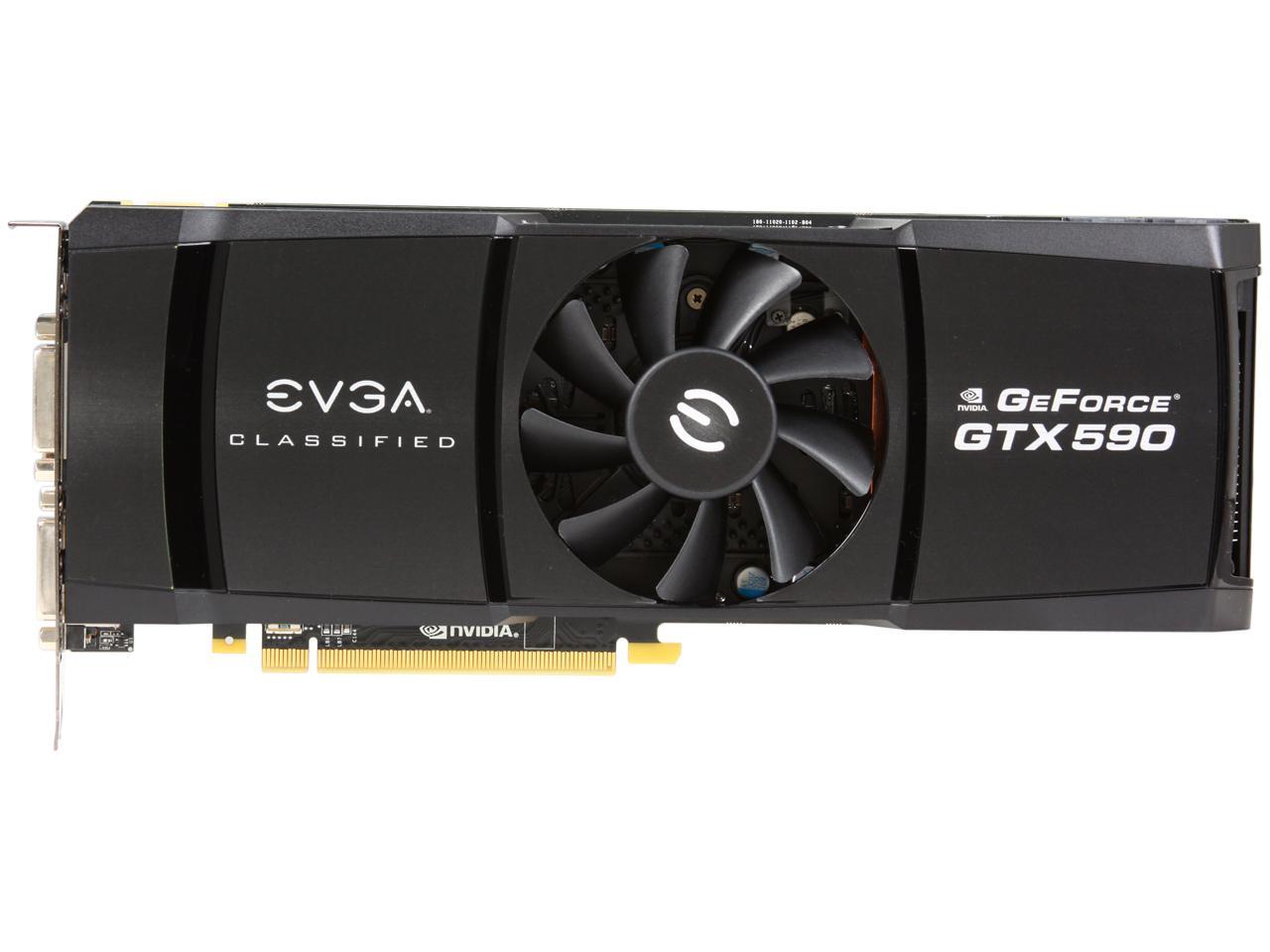 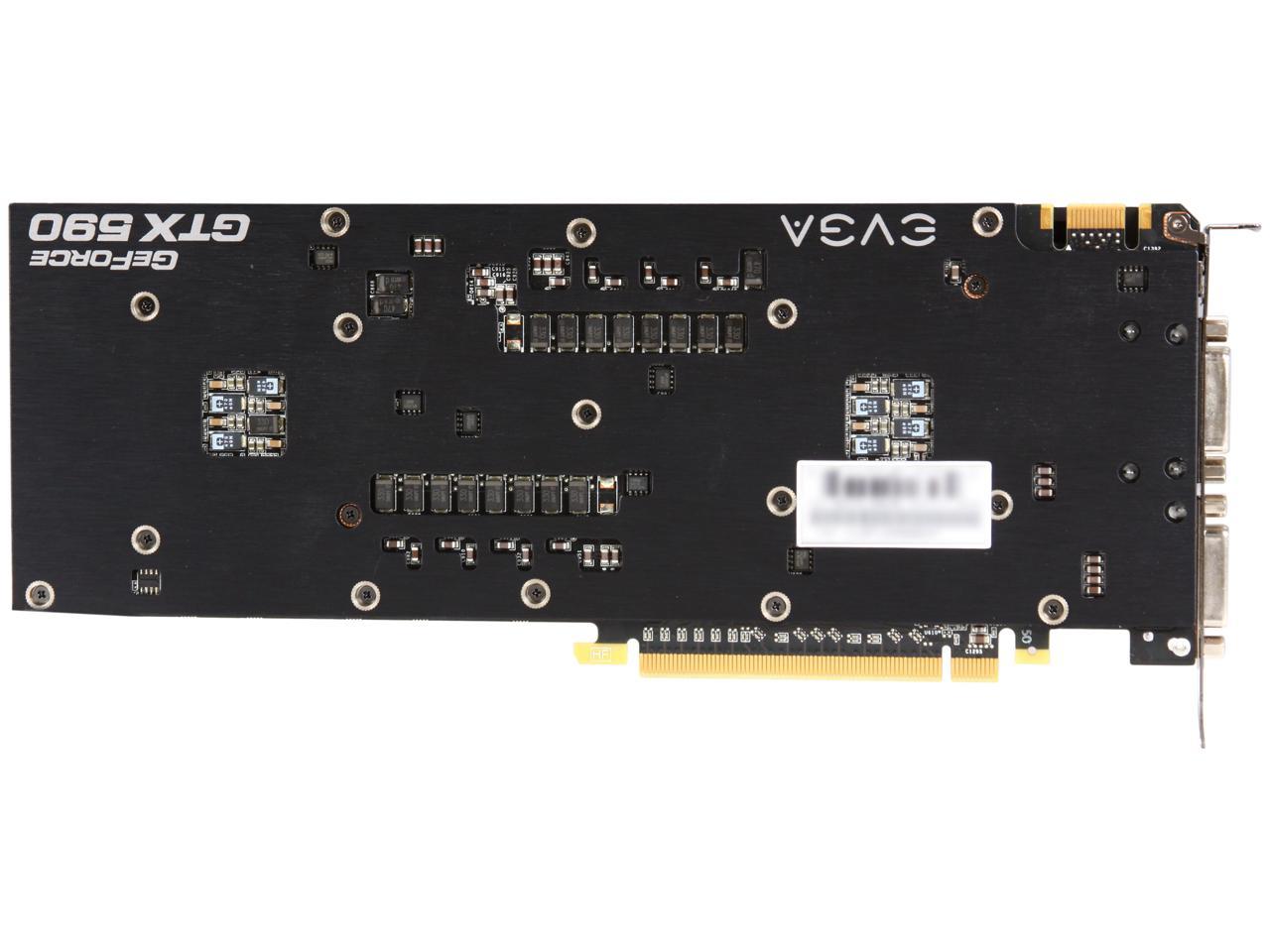 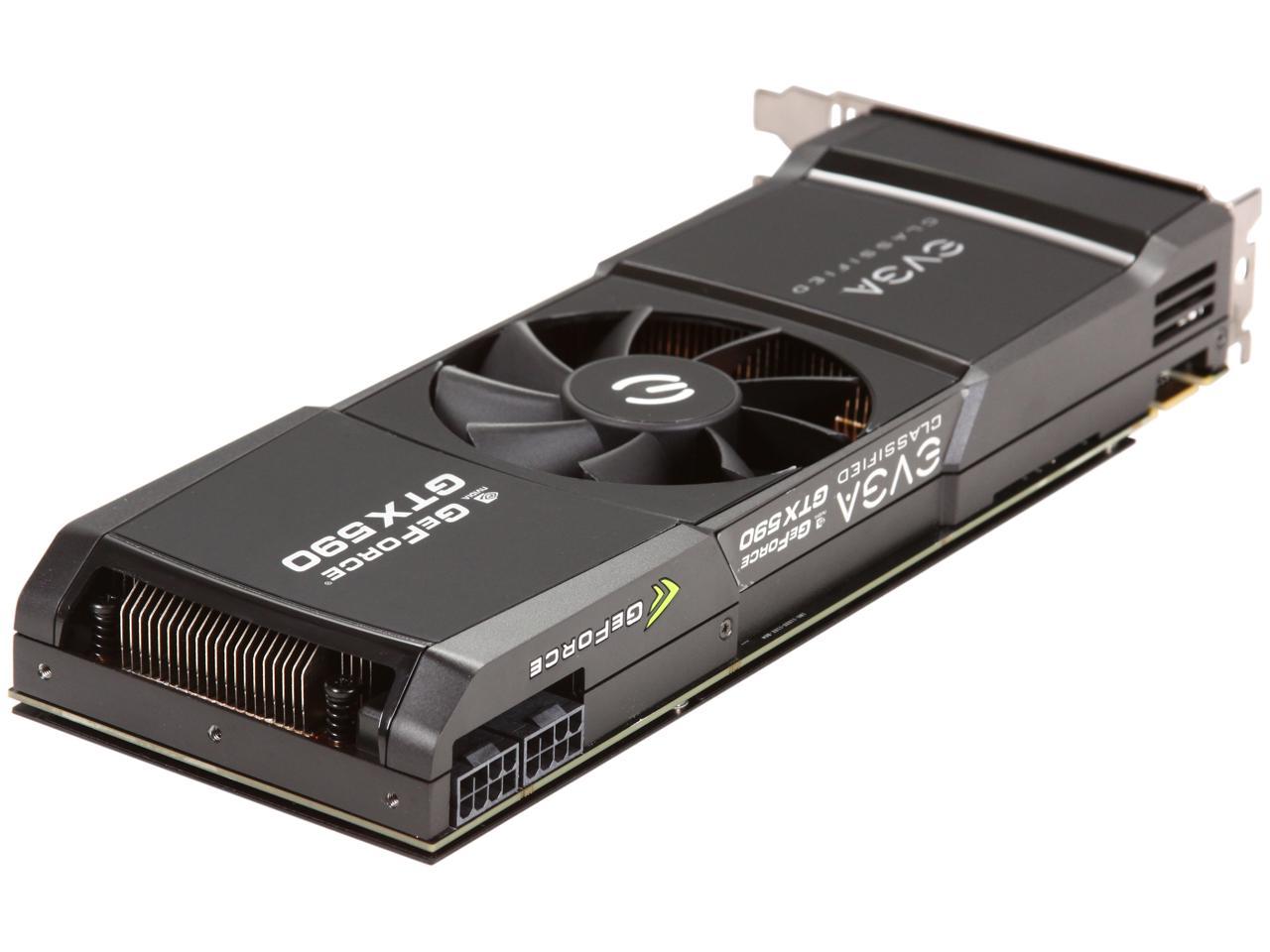 (55) Write a Review
See more "gtx 1600"
In stock.
Ships from United States.
Most customers receive within 2-6 days.
Overview
Specs
Reviews
Designed for über enthusiasts and those looking to build the ultimate PC gaming rig, the GeForce GTX 590 is the most powerful DirectX 11 graphics card ever built. With a sleek exterior that houses dual 512-core GTX 500 GPUs, 3GB of GDDR5 memory and a custom vapor chamber cooler, the GTX 590 delivers high-end performance with dramatically quiet operation.
Additionally, the GTX 590 is capable of crunching the latest games at the highest super-sampling anti-aliasing while giving you full 3D Vision Surround support, or you can split up to 4 monitors up - all off of a single card. Like all NVIDIA "DX11 Done Right" GPUs, the GTX 590 delivers the world's fastest performance for DX11 games along with support for NVIDIA PhysX, CUDA and SLI technologies. The GTX 590 truly was designed from the ground up to compromise nothing while delivering the world's fastest graphics card.

Pros: I decided to write this as a goodbye letter to this great card. I have been running it nonstop for almost 4 years now and it has never failed me. I want to thank EVGA for making such a great card and Nvidia for putting an SLI solution on one card. No one will ever read this review because the 590 is long since discontinued, but sometimes having a review read is not as important as writing it. This was a great video card and it should go down in history as such. Thank you 590.

Cons: This is probably not the card for the hardcore Graphics Card overclocker. I've read of a few cases about something going wrong when the voltage is set beyond 1.0v. What I'm saying is if you're looking for GTX 580 SLI performance out of this card then do your homework before you buy. I have absolutly no fear when it comes to overclocking my i7-2600k or my i7-920 but this card is a bit scary. Personally, I don't overclock graphics cards... Only processors. IMO, if you're a Graphics Card overclocker then you probably look at a W/C setup for it. It would seem that if you plan on running 3 monitors (5760x1200 or 5760x1080) you may want to look at a second card for SLI. The HUGE BOX, mousepad, and the Black Oversized T-Shirt. I would have rather had a game of my choice or a Mini DisplayPort to HDMI cable. I've owned a number of graphics cards and I've never bought one that came with a free game.

Overall Review: It took 3 days to get the 3D Mark code. I have yet to install the program on my PC. Oh, maybe I should have done it first just so I could brag about the score. This card is hard to come by. If you do want one then just check newegg on a daily basis. Obviously, the weekend is not a good time to look. Make some time between Tuesday-Thursday if you want this card. Just remember to register the card within 30 days. I would suggest trying the card out and playing a game on it before you register. If it's DOA then newegg will take care of you.

Pros: Absolute beast of a card.... All games played at 1920x1080 BF:BC2 all maxed, 32xAA, nVidia 3D and it flows like water. Batman AA GOTY: everything maxed (incl PhysX) is smooth S.T.A.L.K.E.R. C.O.P: everything maxed and plays fantastic Solid if not flashy design. Backplate is nice, front is barebones with no artwork, but the GeForce light on the side of the card is a nice touch.

Cons: Was about half inch longer than previous GTX280 but its about a quarter of an inch narrower Had to reroute a few cables around to fit it snugly and make a minor modification to inside of case. In all, nothing life altering. Price of course, but somebody who is eyeing this knows what they are getting into

Overall Review: I am thoroughly satisfied with everything I through at it and the kind of performance I am seeing is amazing. It runs cooler and quieter than my GTX280 (which is still a very good DX10 card). Seeing the performance of this card in games is like seeing the face of Zues....and kissing him on the cheek....it's awe-inspiring how much better things can look and move.

Cons: Price The fact that its severely under-clocked.

Overall Review: I have mine at 700/1800 with stock volts and its humming along. This should of been the stock clocks for this card.

Cons: EVGA Precision doesn't let you modify GPU voltage so you need to use something else, MSI Afterburner is quite good for that.

Overall Review: I had couple hight end video cards during list year, including Radeons 5870s, 5890s, Nvidia GTX 480s. Sold each of them after like two, three months playing with. I can honestly say GTX 590 is the first video card i really want to keep till i replace my PC with new one in two years. What i mean is, it is not just powerfull high-end video card... it is very well designed and made product !

Pros: I cannot hear this card at all. It is slightly smaller than my old BFG GTX295 which it replaced. Every game runs like warm butter with all settings maxed out. No heat problems.

Overall Review: The box this card was shipped in is embarassingly huge. The overall size of the box (made of high quality cardboard) leaves me wondering how much I paid for the container. I clearly feel I should find some other use for the box rather than toss it in the trash.

Pros: Very quiet, even under load; Much quieter than the ATI 4870x2 it replaced. Fast; very fast. Might be slightly slower than the radeon 6990, but to me the noise levels were unacceptable on the radeon.

Cons: Slightly slower than the ATI equivalent dual core behemoth; but lets be honest; you're unlikely to notice it in practice.

Pros: -1 card... -Quiet -Not much heat output...MUCH MUCH less then my 8800 Ultra's in SLI -EVGA Warranty and great little package of goodies -I play Crysis Warhead...EVERYTHING on Enthusiest 16x AA...everything you could imagine maxed, and it never gets under 55 FPS. Remember it's not maximum frames or even average that counts...it's the minimum. That's where the 590 smokes

Cons: Price? Although it was $300 less then my SLI 8800 Ultras when they came out. Size I guess? Was kind of a pain to seat in MB but not really.

Overall Review: It's hands down the best single card solution card out there. I will never SLI two cards again, to much heat and noise. The 590 is the perfect card.