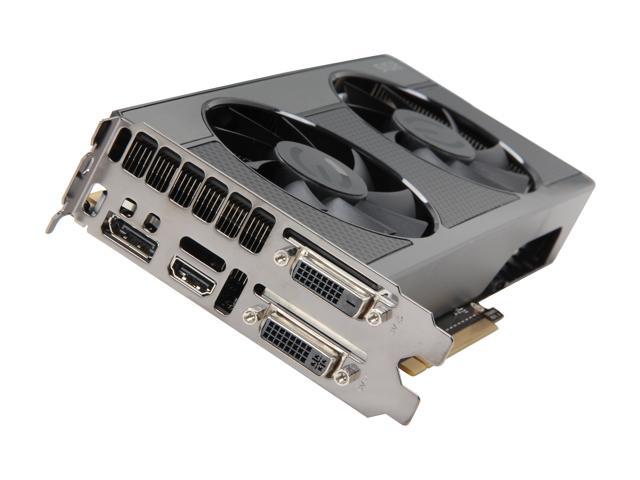 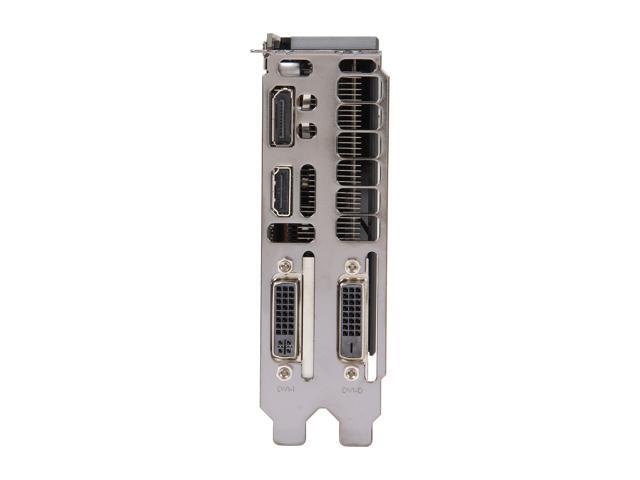 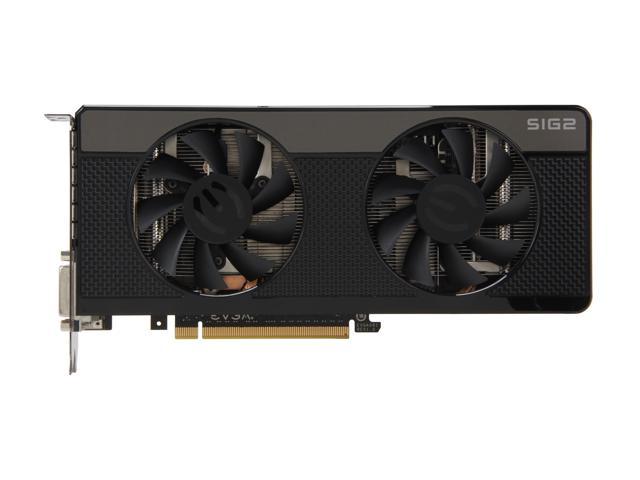 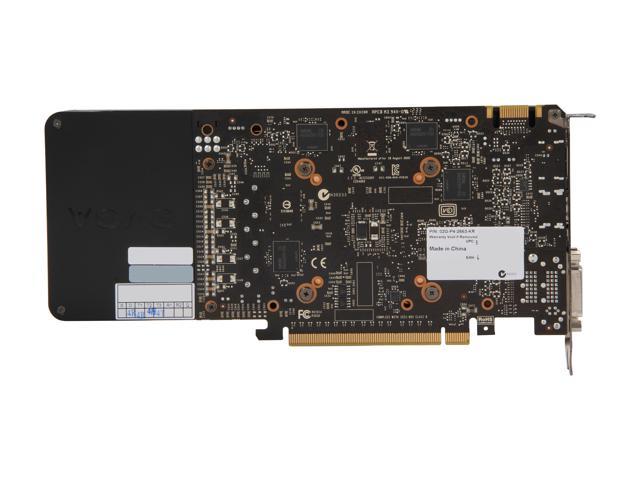 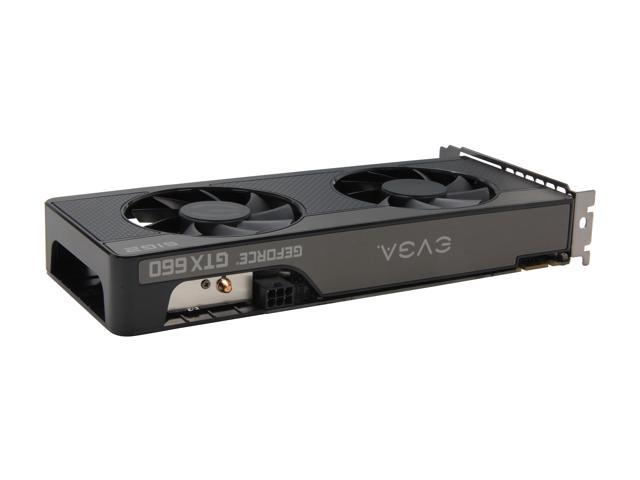 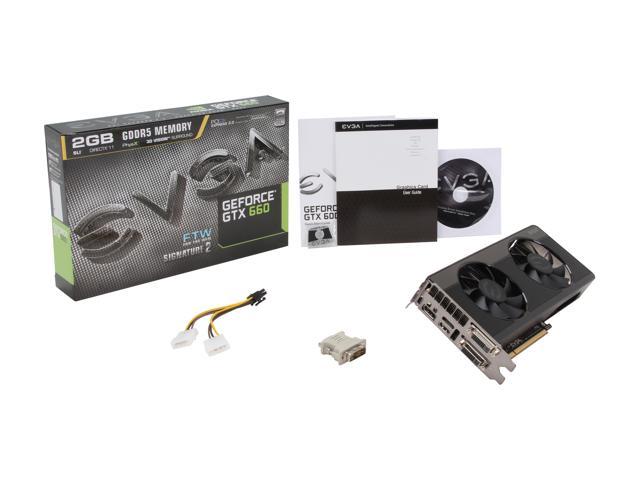 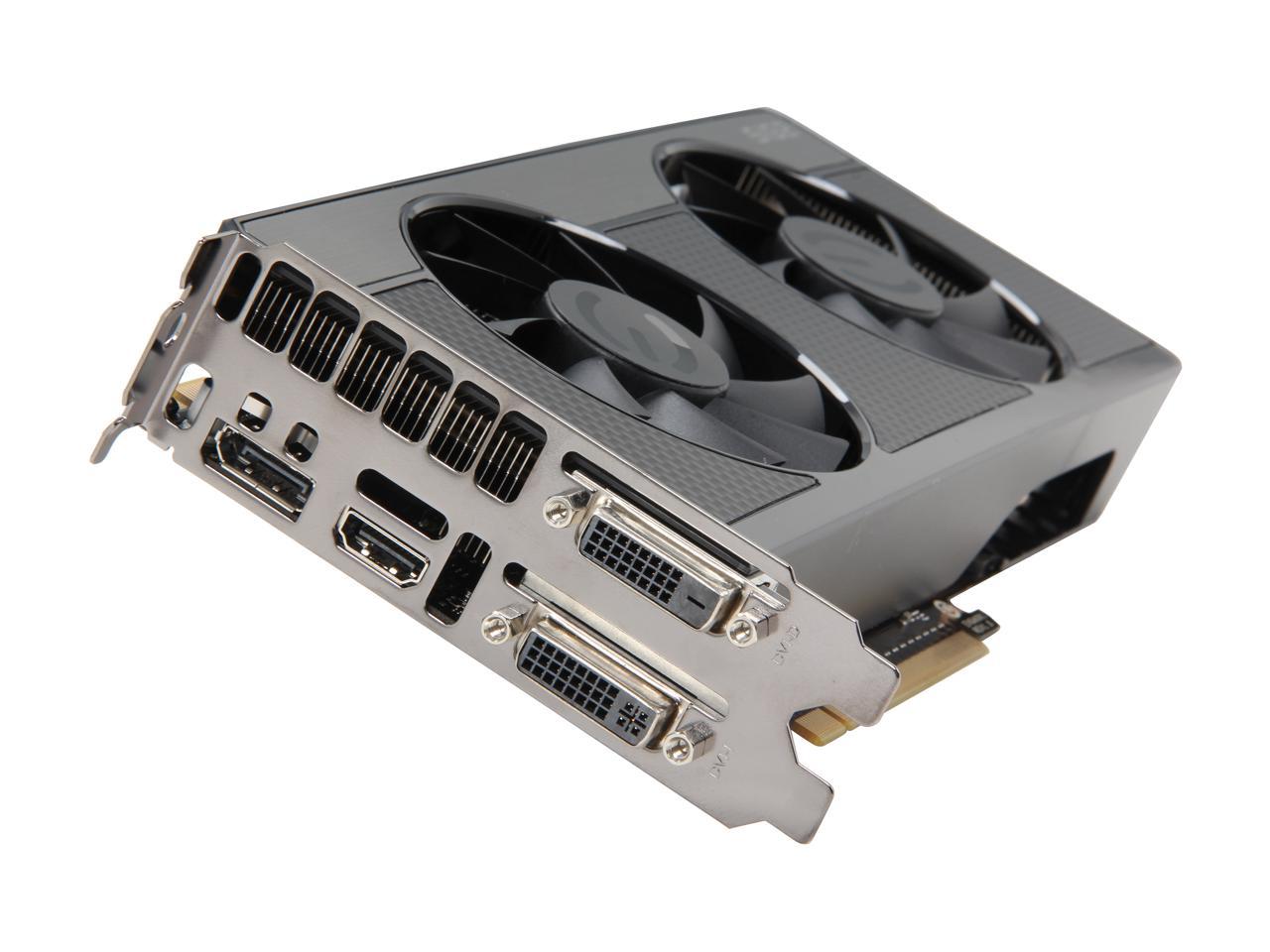 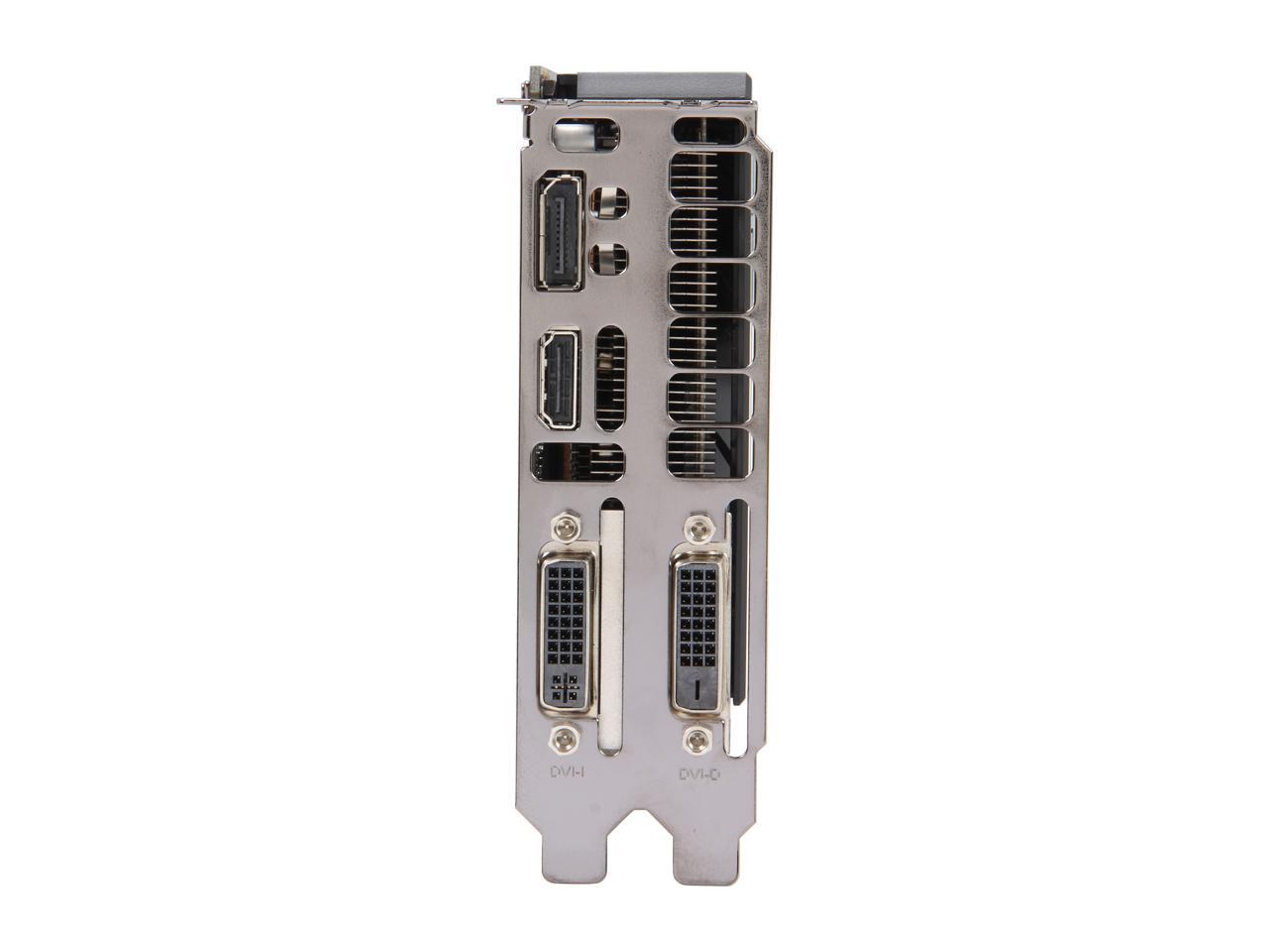 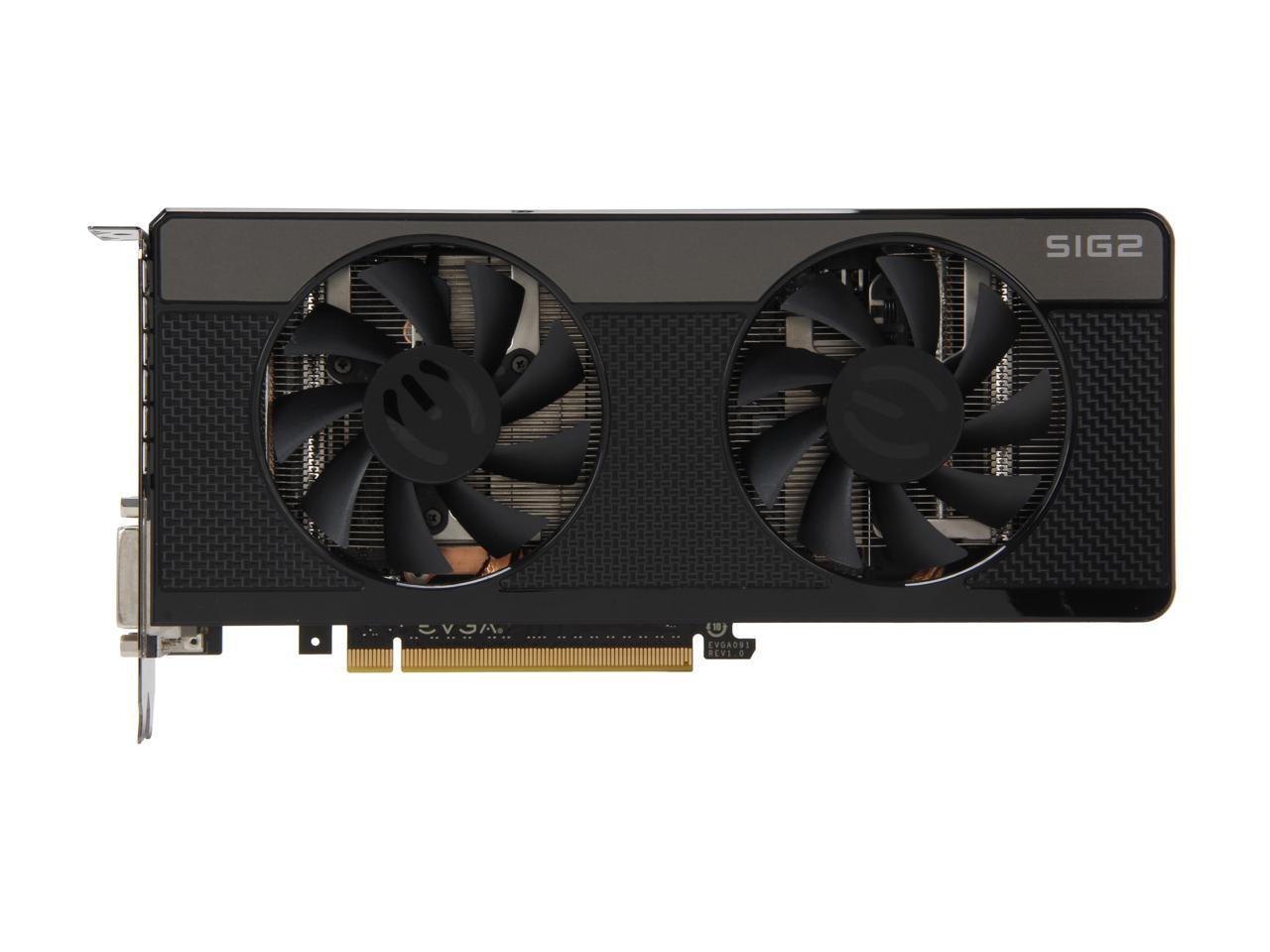 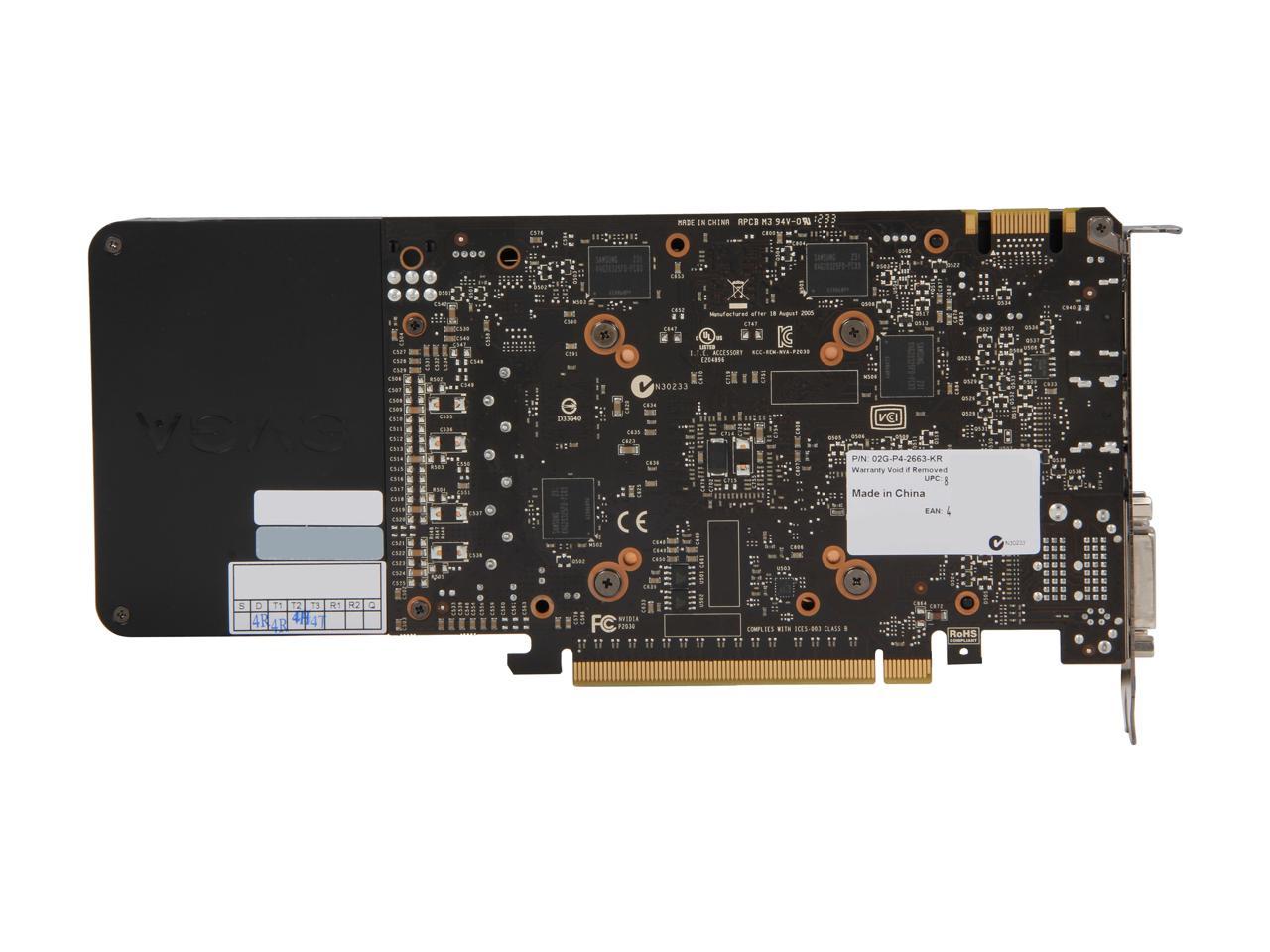 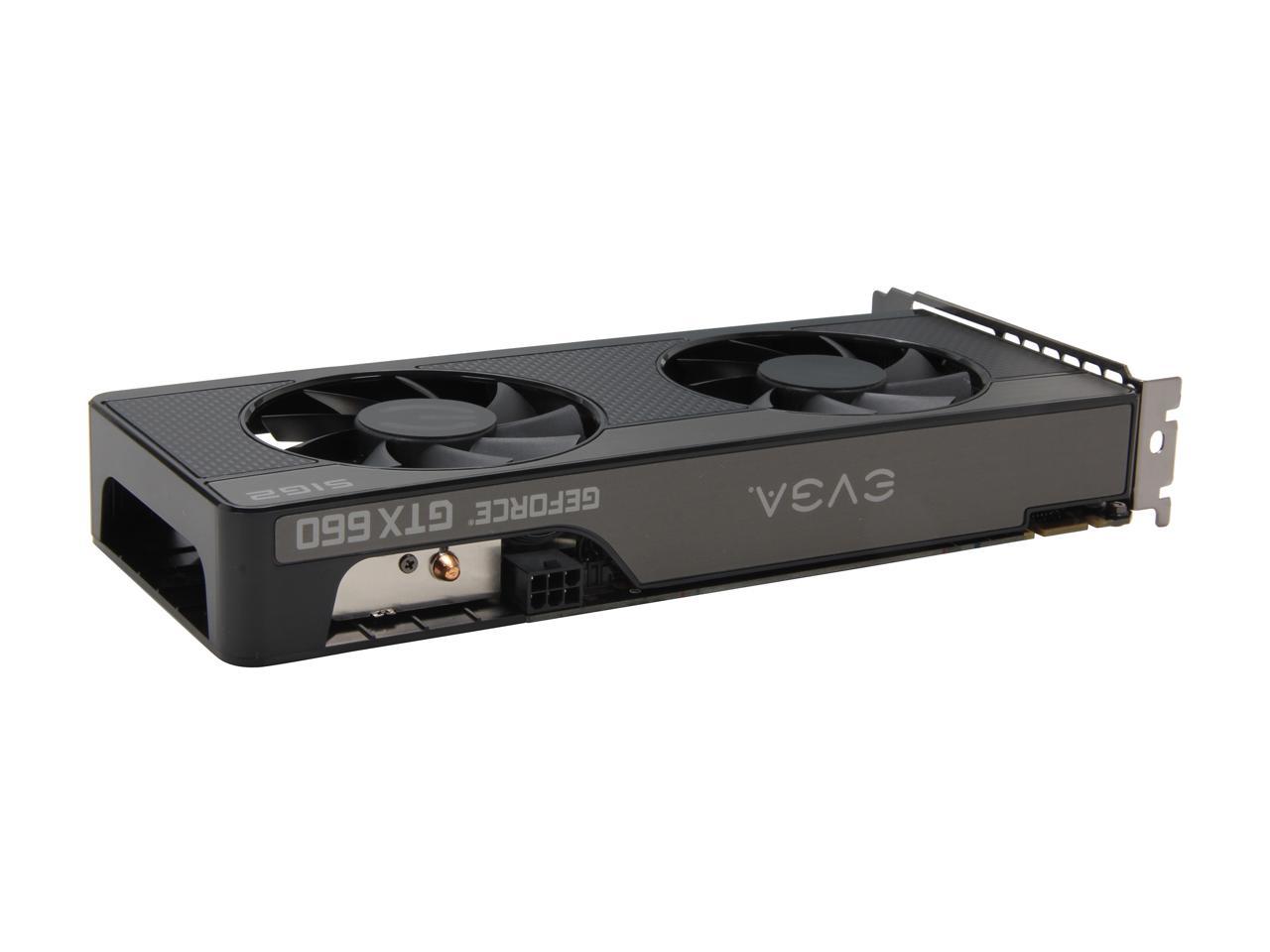 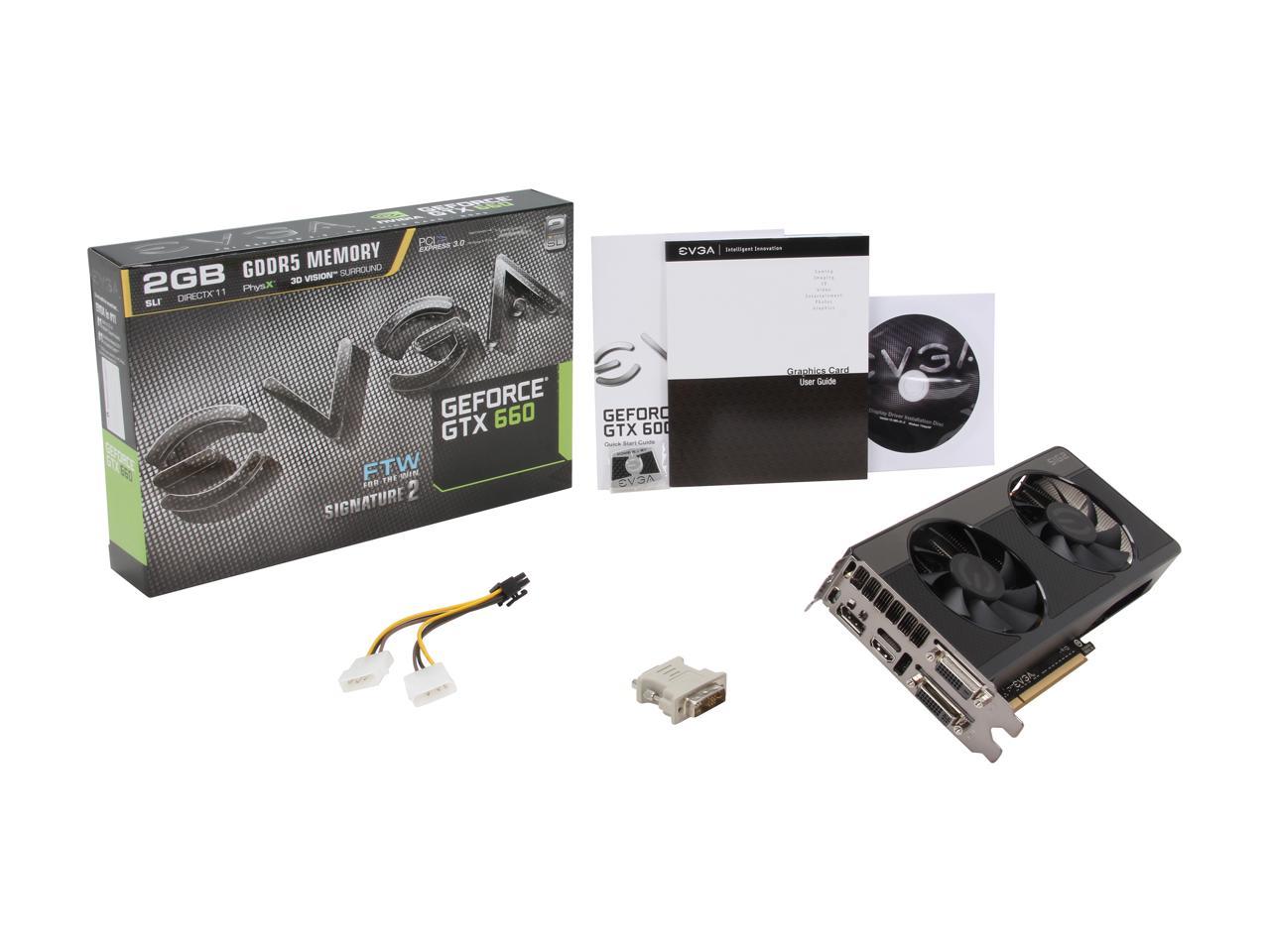 
A new hit of the "sweet spot" for gamers, the EVGA GeForce GTX 660 delivers the ultimate combination of performance, power efficiency, and affordability. It's built around 960 CUDA Cores with 2048 MB / 192 bit GDDR5 memory to render your blockbuster games with vivid details and skip-free pictures. This GTX 660 FTW Signature 2 version is factory overclocked to 1072MHz Base Clock/1137MHz Boost Clock - a level higher than the 980MHz Base Clock/1033MHz Boost Clock than reference specification for delightful performance boost and higher framerate in actual gaming. Enjoy great peace of mind with dual silent fans that deliver quiet cooling. GeForce GTX 660 also packs support for all the premium GTX gaming technologies such as NVIDIA Surround, 3D Vision, PhysX and SLI. With these features and more, the EVGA GeForce GTX 660 gives you more than one way to elevate your experience.

Overall Review: I've had this card for a few months now and it's been a blast. It runs all the games I play at high quality, with high frame rates at 1080p. It runs extremely cool and quiet even under load. Has not given me a single issue. I bought this card to replace my old card, an EVGA GTS 450 1gb. The jump in performance has been dramatic. Very very happy with this card and would happily recommend it!

Pros: Consumes less power and runs a bit cooler than my old pair of 460s. Power jack is along the top of the card. Only needs one 6-pin power plug per card instead of two.

Overall Review: I purchased the card on the 19th and the card arrived today. I noticed that Assassins Creed 3, literally one day after I purchased, now comes with the card for free. I was going to get the GTX 650ti which was doing that promotion already to get the game but decided to spend a little extra and get performance instead. I was angry at first but then contacted Newegg and recieved an email saying they will mail me the code anyways as courtesy. I love Newegg. Excellent customer service. I have done a couple prior purchases and after this gesture I am now a customer for life.

Pros: Very fast. Fantastic cooling. WHISPER quiet. Under full load I don't even hear this card at all under full load and my case sits on top of my desk about two feet away from my head. Amazing. Runs very cool.

Cons: Not really a con but it is large, if you are thinking of SLI aim for a full ATX board rather than a mATX. Fits well in my mid-tower case but ALWAYS measure/check!

Overall Review: Games I've run at full settings at 1080p with no issue at all: Metro: Last Light Aion Online Battlefield 3 CS:GO Far Cry 3 more to come but it has eaten these games up with zero complaints.

Pros: I've tried several games on it so far and I have yet to play one that has not ran great with this card. When I have been playing a game for more than a hour or so I like to check to see what the temp is at. I haven't seen it go over 41 degrees celsius. I may try to overclock it eventually, but at the moment its unnecessary. I've owned a few EVGA cards now, and I've not had problem with them yet. Plus EVGA's Precision X is so nice and easy.

Cons: I haven't encounter a single problem so far. I've had it about two months now.

Overall Review: Games I've played so far, and all at max settings: Age of Conan Arma 2/ DayZ Mod Arma 3 Metro 2033 Planetside 2 Skyrim Battlefield 3 Chivalry: Medieval Warfare and for a laugh CoD 2 (constant 1000fps) I'm probably not even giving this card its full potential. I'm starting to rebuild my setup, so I started with this card. Current Setup: AMD Phenom II X4 940 @ 3.4GHz [using my awesome Cooler Master TPC 812 to keep it cool, Thanks EVGA ;)] M3N72-D 750a Asus Motherboard 4GB Gskill DDR2 1066 RAM OCZ Tech 700W PSU WD Green 500GB HDD Was using two EVGA 9800gtx+ in SLI Now using EVGA GTX 660 FTW Sig 2 Everything except my CPU heatsink and my harddrive, I've gotten through Newegg. I may write a new review once I've completed my new setup. I'll try to include more info like FPS I am getting on games and all that good stuff. EVGA + Newegg = Awesome

Pros: Well built. doesnt feel like some cheap plastic. has some weight to it aswell to be honest. Multiple outputs for those still running VGA. The duel fans are definitely worth it. ( 35C top iv seen it with any game iv played. all my games are maxxed/ultra @ 8x with 1 single card) 2GB ddr5, more than fast enough for almost any game. Solid 60 FPS at 1920x1080 @ 1080P Solid overclock at 105% power threw evga precision x.

Cons: NO CONS!!, however i run 2 in SLI top card hits about 45C tops after hours of gaming,Hours meaning 8+(bottom between 30-40c. they both stay about the same but only the top gets slightly hotter) but its normal. Heat rises so its expected

Overall Review: I have only run Folding@Home on this card so far, but I am very happy with the results! With normal work units I am averaging ~15,000 PPD with this card in a box with a Q9400 @ 2.75GHz. With the new beta work units (8057) I would see ~95,000 PPD. The card is running at 49 degC with the core clock at 1215MHz and stock voltage. The fan is running at 50% and not noticeable. This set up is pulling 209 watts at the wall measured with a kill-a-watt meter. I have yet to use this card for gaming. It just sits there and folds while I study for med school. I will update when I have a chance to game on this card.

Cons: card would crash at stock clock speeds, had to underclock it to be stable. just got a bad one.

Overall Review: did rma from EVGA and they shipped me a gtx 760 acx superclocked one so its a bit of an upgrade. will write review on that card after arrives.