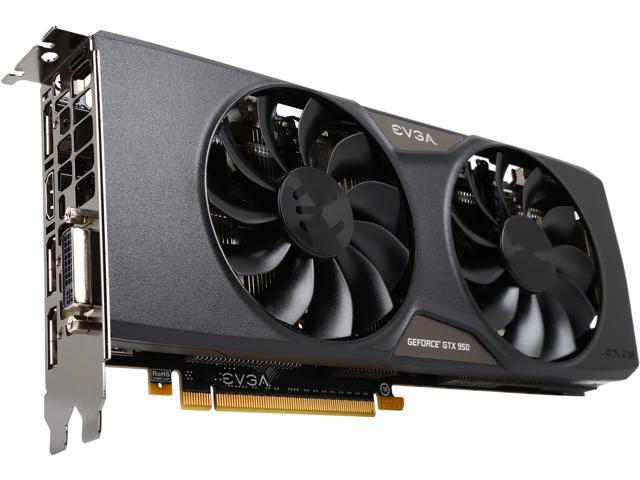 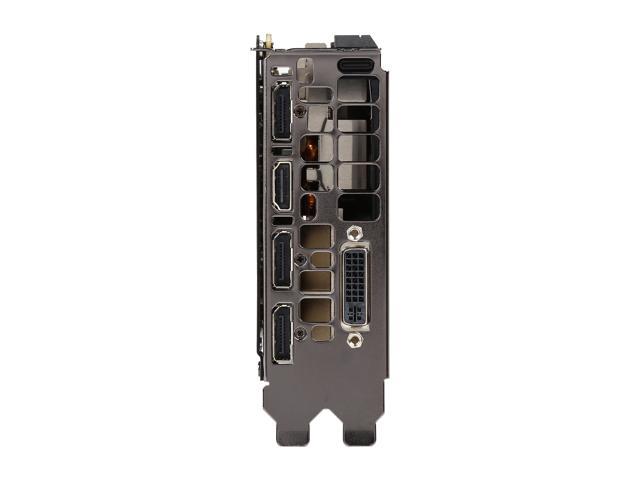 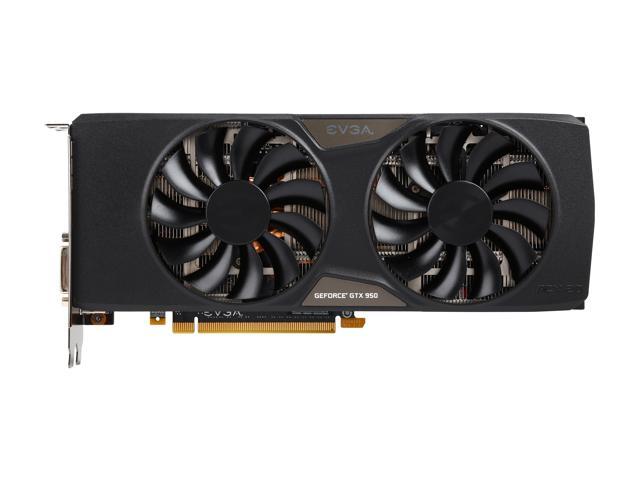 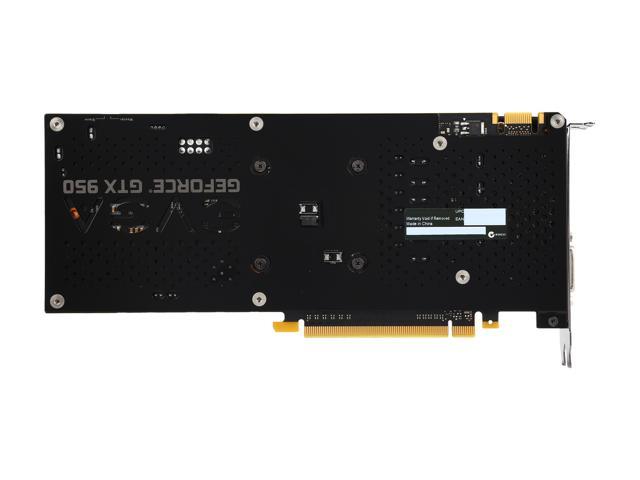 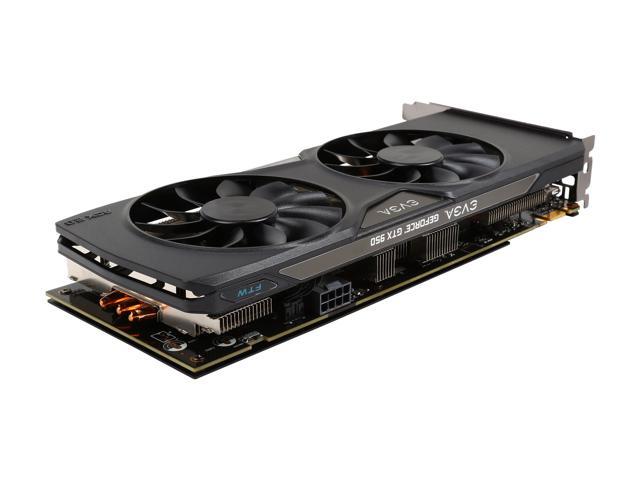 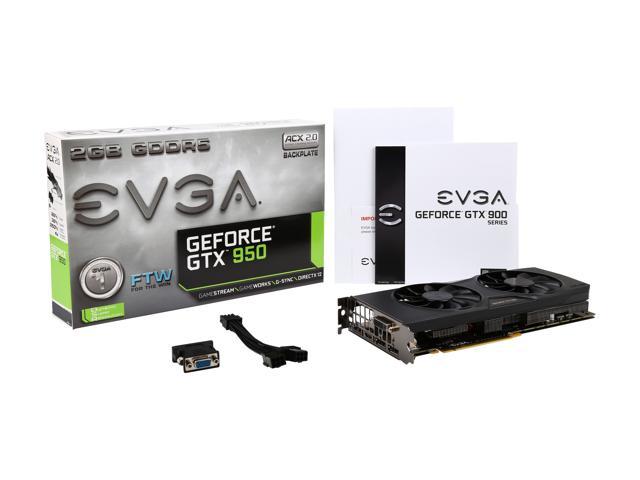 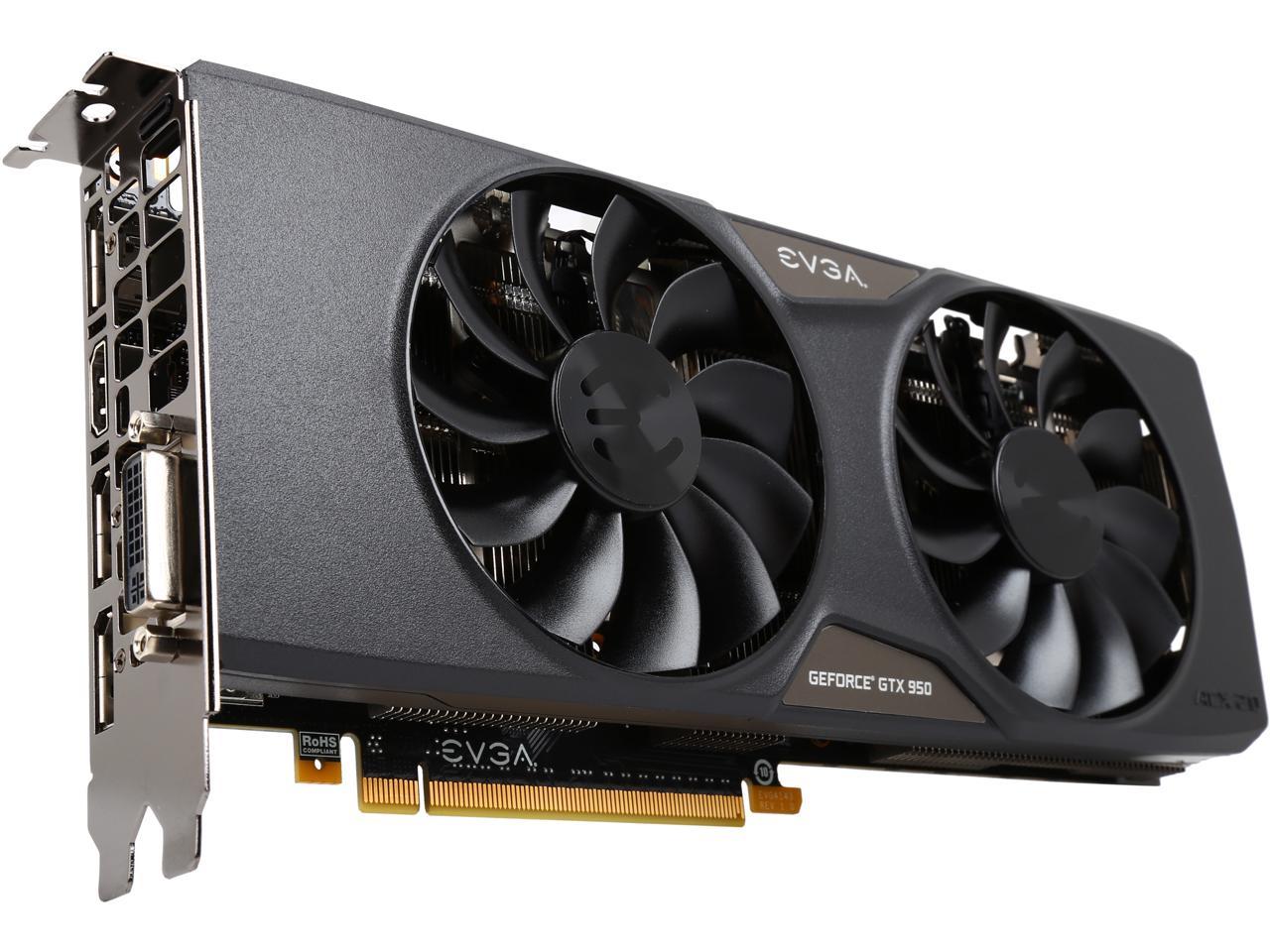 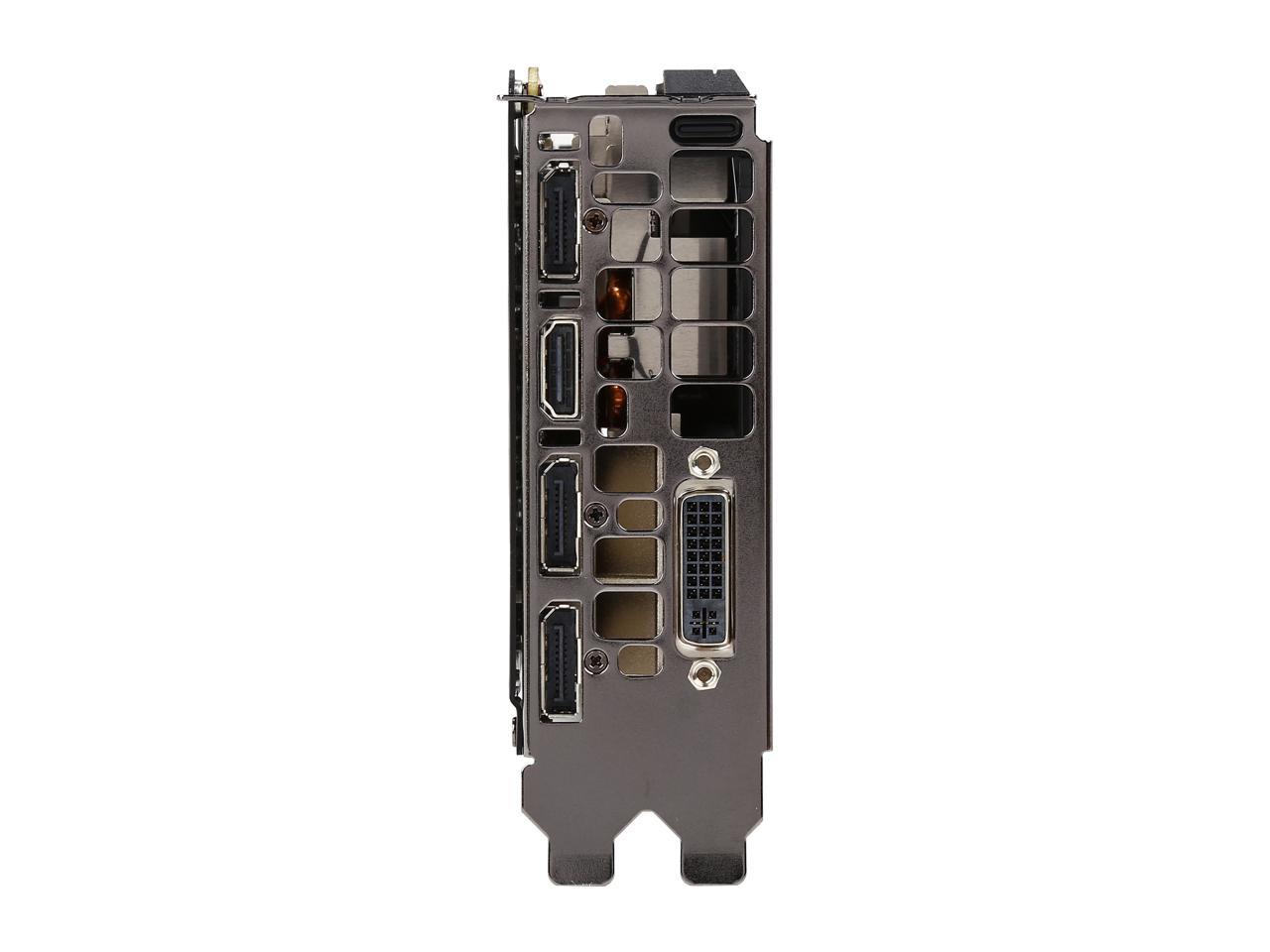 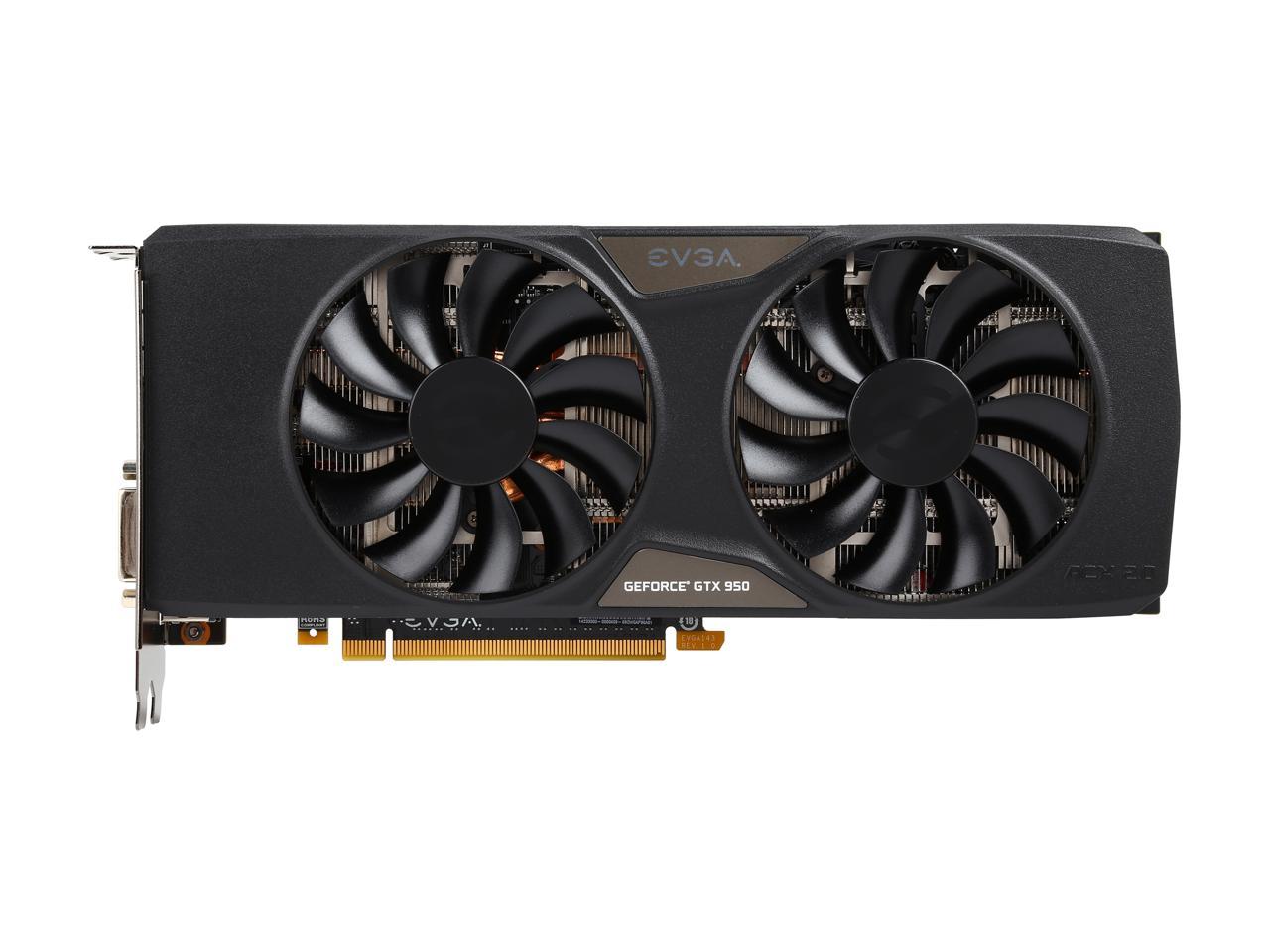 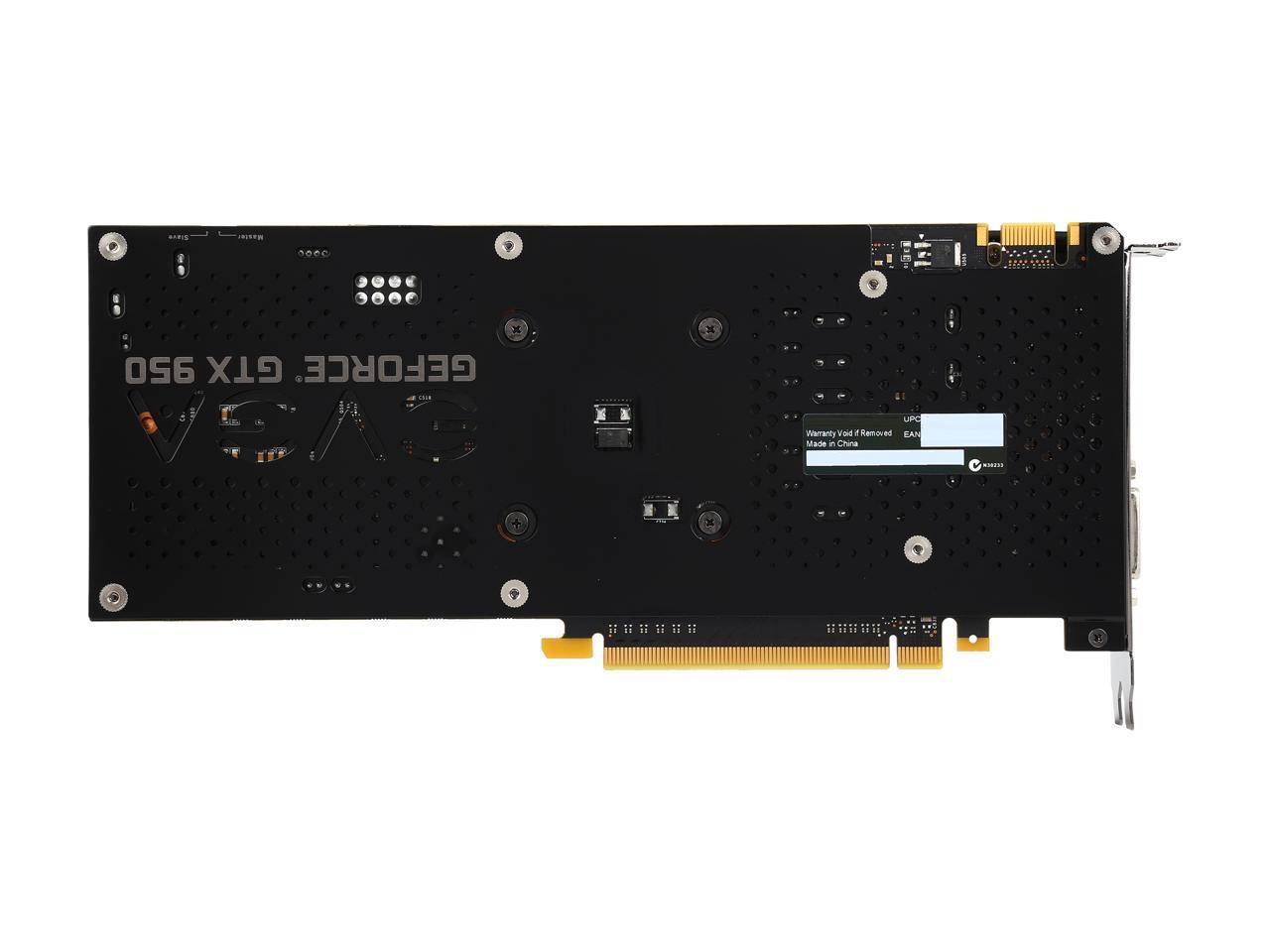 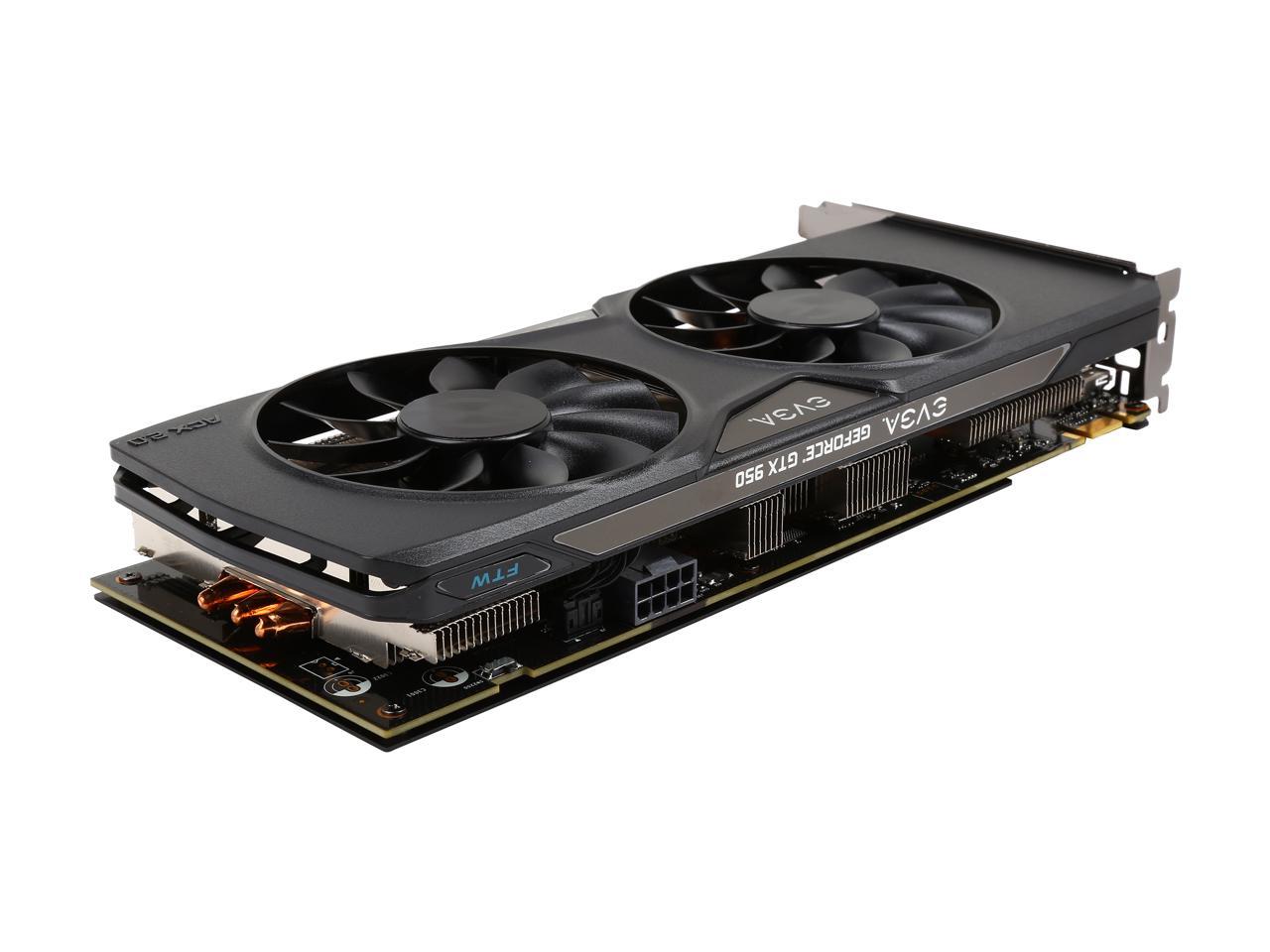 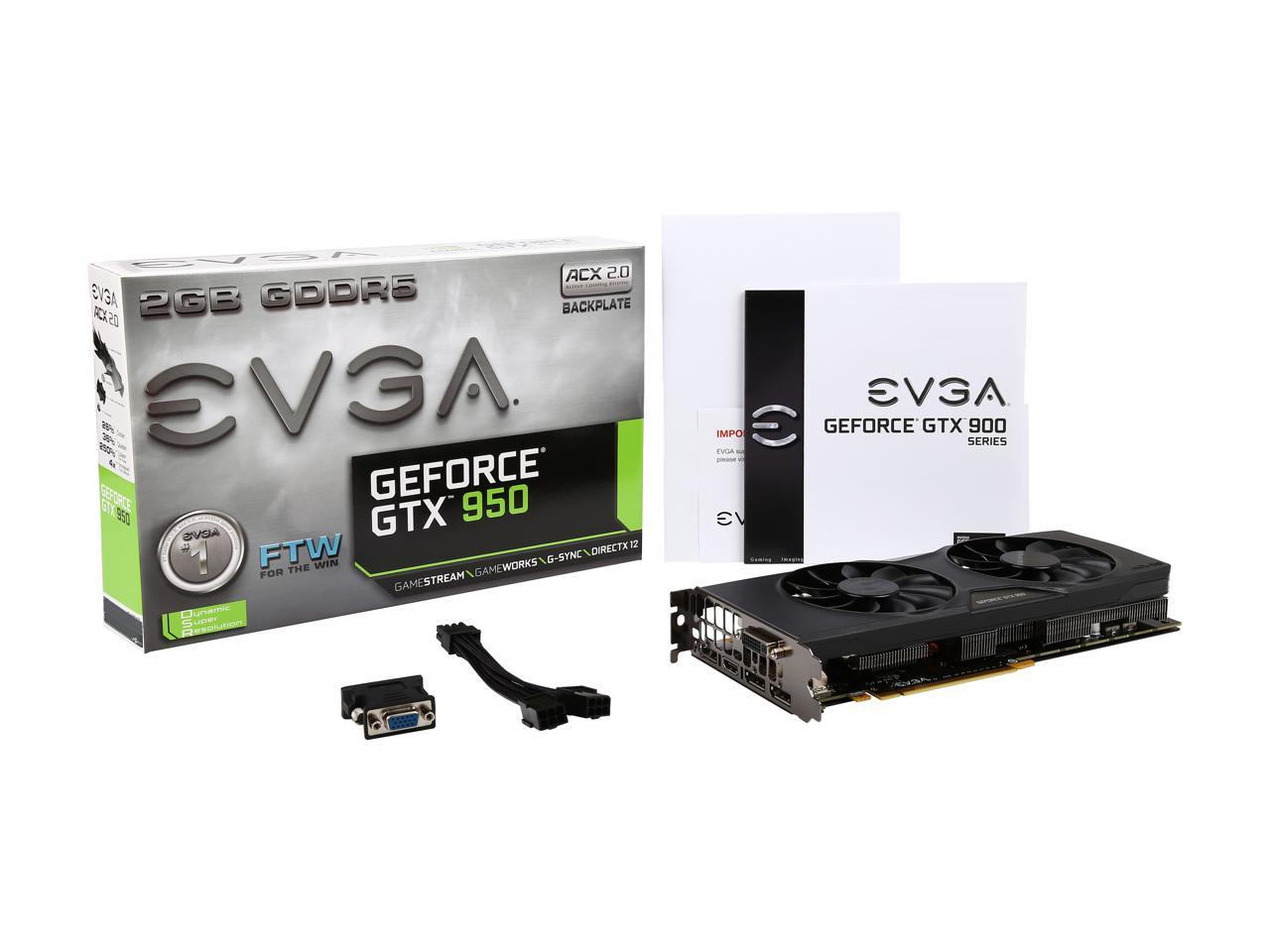 The EVGA GeForce GTX950 is a true gaming GPU designed for every PC gamer. It's built to the exact specifications of the GeForce GTX family and powered by NVIDIA Maxwell - the most advanced GPU architecture ever created - to deliver 3x the performance of previous-generation cards. *More powerful than any console, this card delivers a truly interactive, cinematic experience in the latest games with advanced effects driven by NVIDIA GameWorks and DirectX 12.

Ready to get real about gaming? Experience the performance of the new EVGA GeForce GTX 950 today.

Maxwell's exceptional performance and efficiency means you can transform your basic PC into a modern gaming rig that can play the latest games at 1080p.

DBI-DB NOISE INVERTER
Fans only run when necessary and turn off during idle. This means the EVGA card is completely silent when not gaming! Pros: Shadowplay streaming via Youtube and Twitch @1080p! Never hear it running! Runs cool! Plug and Play out of the box! Awesome construction quality that you would expect from EVGA! GeForce Experience!

Overall Review: Got this card when it was on sale for $149.99 and a $20 rebate received in 4 weeks for a final cost of $129.99! Very happy with this card and as always great shipping time from Newegg! I highly recommend EVGA products. I have had 8 cards made by them over the years and will never go back to other brands again. EVGA by far outlasts the competition for gaming. Runs most games on HIGH settings at very playable frame rates! (Games I have tested it on @HIGH settings: Elder Scrolls Skyrim, Killing Floor 2, Guild Wars 2, Tera, Killing Floor 2, Battlefield 4, Landmark Beta, Ark SOTF, The Witcher 2, Warface, Everquest 2, 7 Days to Die, COD Black Ops 2 and 3, and quite a few low budget titles at MAX settings.

Pros: VERY low heat! This thing sits idle at 25c, my previous card sat idle at 55. My entire room is a few degrees cooler. Very quiet too, haven't even had the fan turn on yet. Low power consumption

Cons: It's huge, almost didn't fit in my mid case with all the wiring and such. It's a snug fit, but otherwise about 1 inch too big for comfort in some systems.

Overall Review: Spent a lot of time researching my 'next' card, and i wasn't dissapointed at all by the rating and reviews on this card once I got it.

Pros: Works perfectly with Linux Mint 17.2. You do have to download the nvidia driver package from Nvidia's website instead of using the stock driver from Mint. Hasn't gotten over 39c yet. I'm well satisfied. Fans have only come on when I turned them on through the nvidia control panel just to make sure they were working. Plenty of room for it in a Deepcool Tesseract case.

Pros: Great Card, Was at a Great price when I got it as well! I got this card to replace my 750ti. Been happy with the performance as it was considerably noticeable. I am able to play Assassins Creed Black Flag with no problems. Can't wait to try out the other games on my list.

Pros: awesome works better than i thought it would. uses less power than my old cards and runs decently cool.

Overall Review: definitly worth buying if u want to play the newest games without dishing out hundreds of dollars. i just bought a second one because the first runs amazing(to sli). packaging was great no damage and it arrived in 1 day ^_^ 5 eggs for sure

Pros: -Runs Skyrim with 4k mods on my 65" Samsung 4k curved like a champ -very silent and cools great

Pros: Everything worked right out of the box no problems, Runs cool sometimes run the fans at 100% but not very often.

Overall Review: Would recommend. Was still able to get an extra 100MHz Core clock and 60MHz Memory clock without stability issues. Make sure you have enough room card is large.

Pros: *Easy to set up and install (The one that didn't arrive in two pieces, anyways) *Looks handsome in the case *SLI on a budget card *Reasonably priced when on sale *Quiet and efficient

Cons: *One of the two that I ordered for my proposed SLI configuration arrived with the cooler/shroud completely separated from the gpu board. It was literally dangling from the power connector to the fans- Doesn't exactly inspire confidence in a brand new card. I don't know what caused this but it has me worried enough about the other one which appeared okay on initial inspection. Anyway, now I'm concerned about the same thing happening to the other one while powered-up. Going to have to RMA one, if not both of them. *Only 2gb DDR5 but you get what you pay for sometimes and this is a budget card. *The whole not staying together in one piece thing is the only real deal-breaker.

Overall Review: Had okay experience with EVGA in the past with only one card dying previously and that was a 8800gt that ran a little hot to begin with. Surprised to see one arrive broken but I guess it can happen to anybody. Still, I think I may go with a different card altogether in this case as putting my rig in limbo while I sort out this out is a hassle that I don't wish to repeat if I can help it. On the plus side, Newegg.com has been nothing but courteous and helpful thus far in the RMA process so I can't knock them for this particular defect on one product.

Manufacturer Response:
Dear Valued Customer, I would like to thank you for your feedback about your EVGA GTX 950 graphics card. Should you or any potential EVGA customer ever have any questions or concerns with any EVGA product, then I would encourage you to contact our 24 hour Support team by phone 1.888.881.3842 and pressing option 1 or by email: Newegg@EVGA.com so that we can further assist you. Sincerely, EVGA Customer Support