Shop Confidently with 30-Day Hassle-Free Returns
OUT OF STOCK
Sold by: Newegg
Shipped by Newegg
This item is currently out of stock and it may or may not be restocked.
Out of Stock
Add To ListFound on 12 wish lists 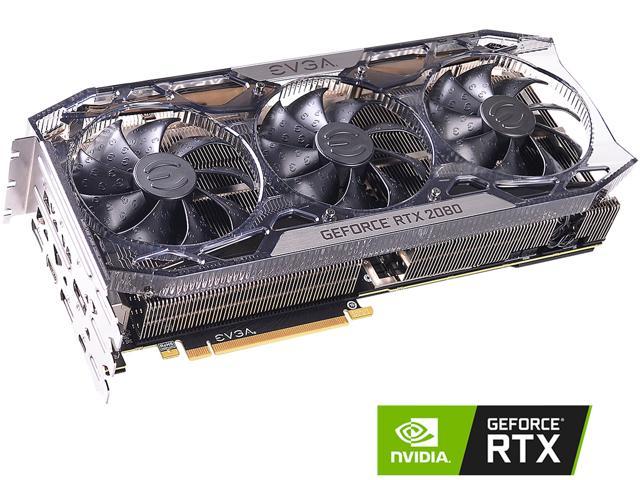 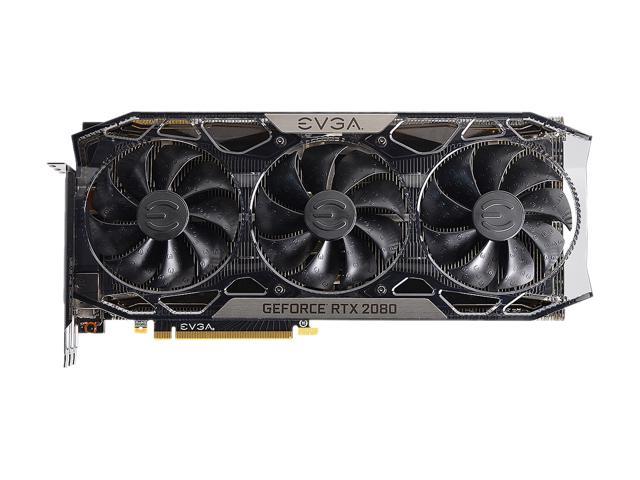 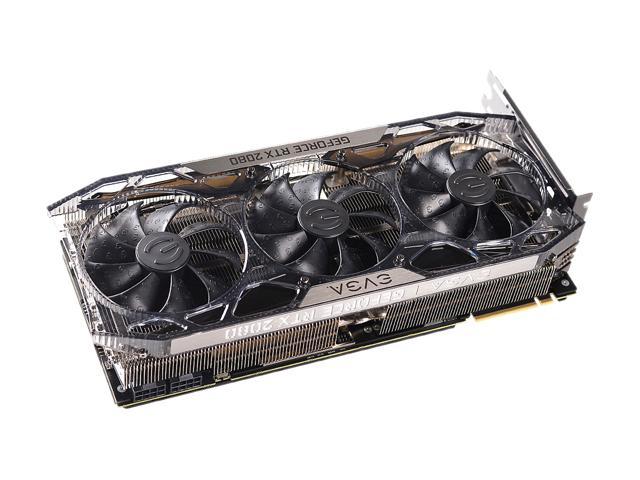 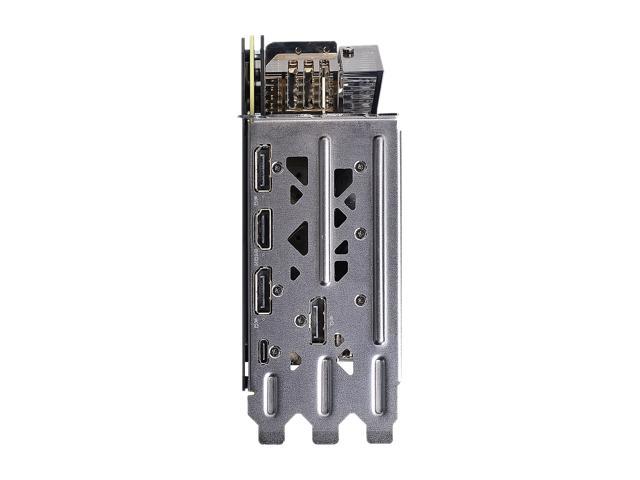 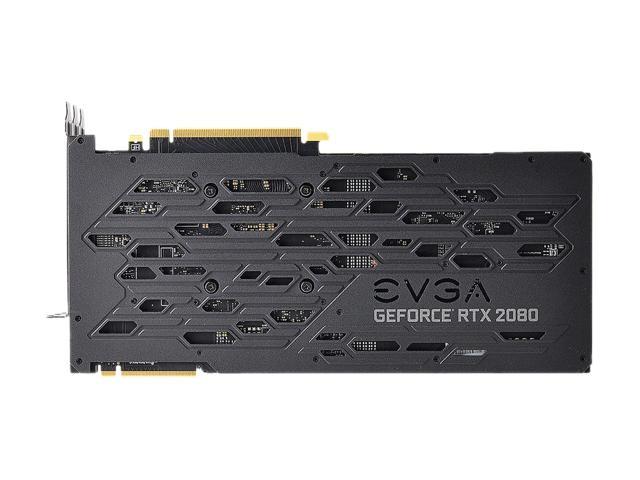 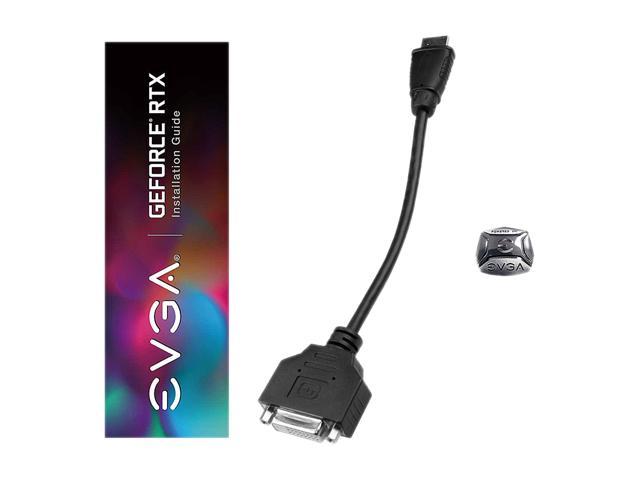 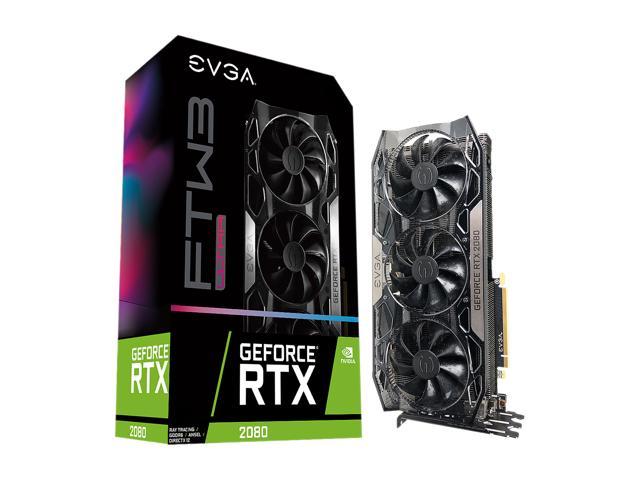 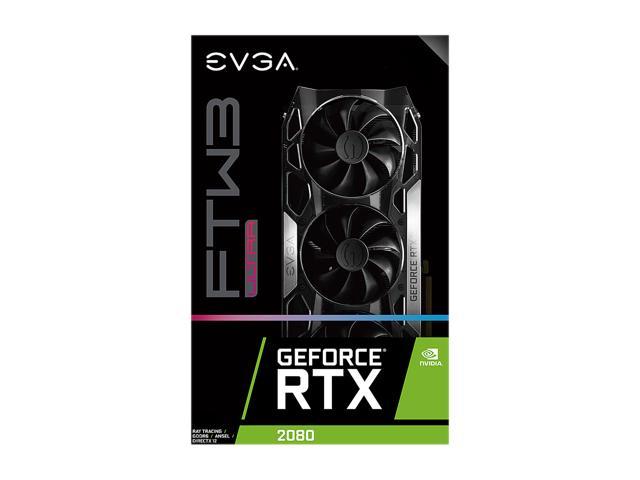 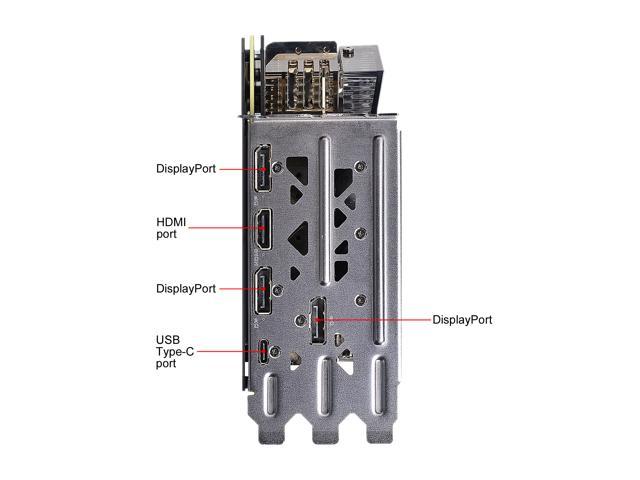 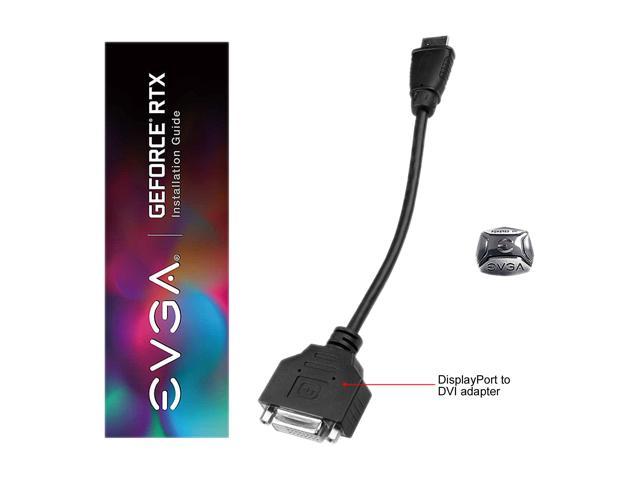 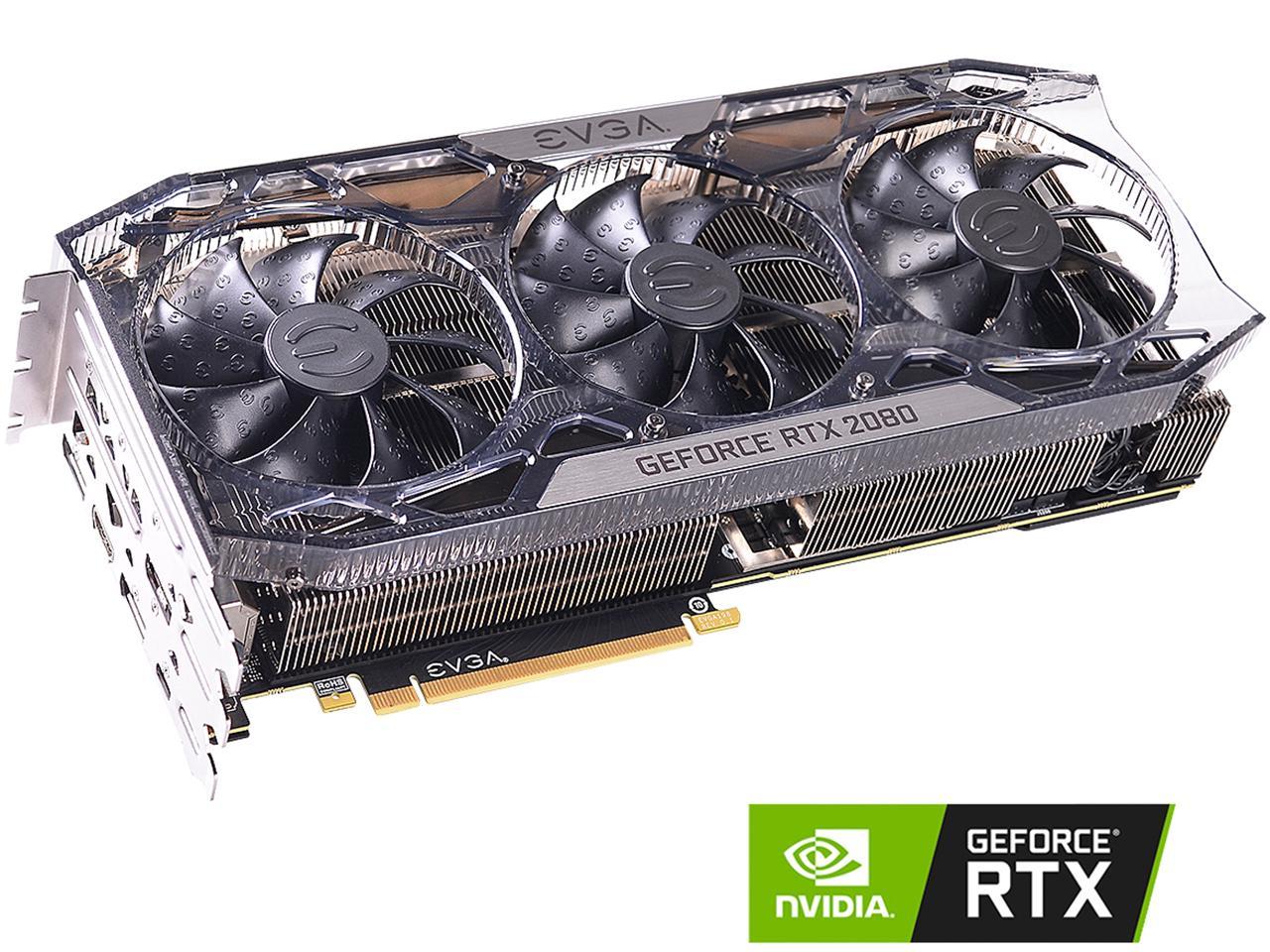 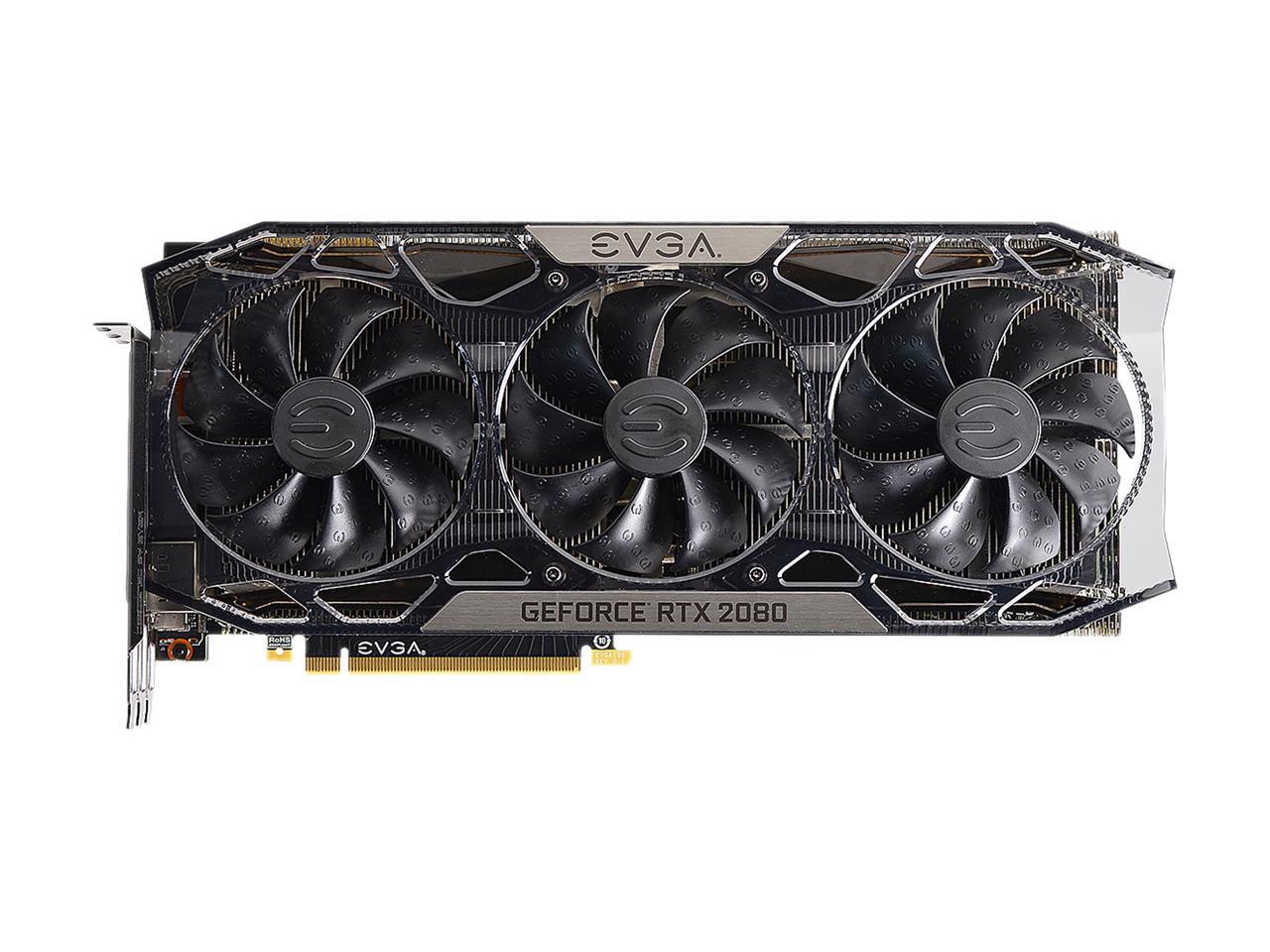 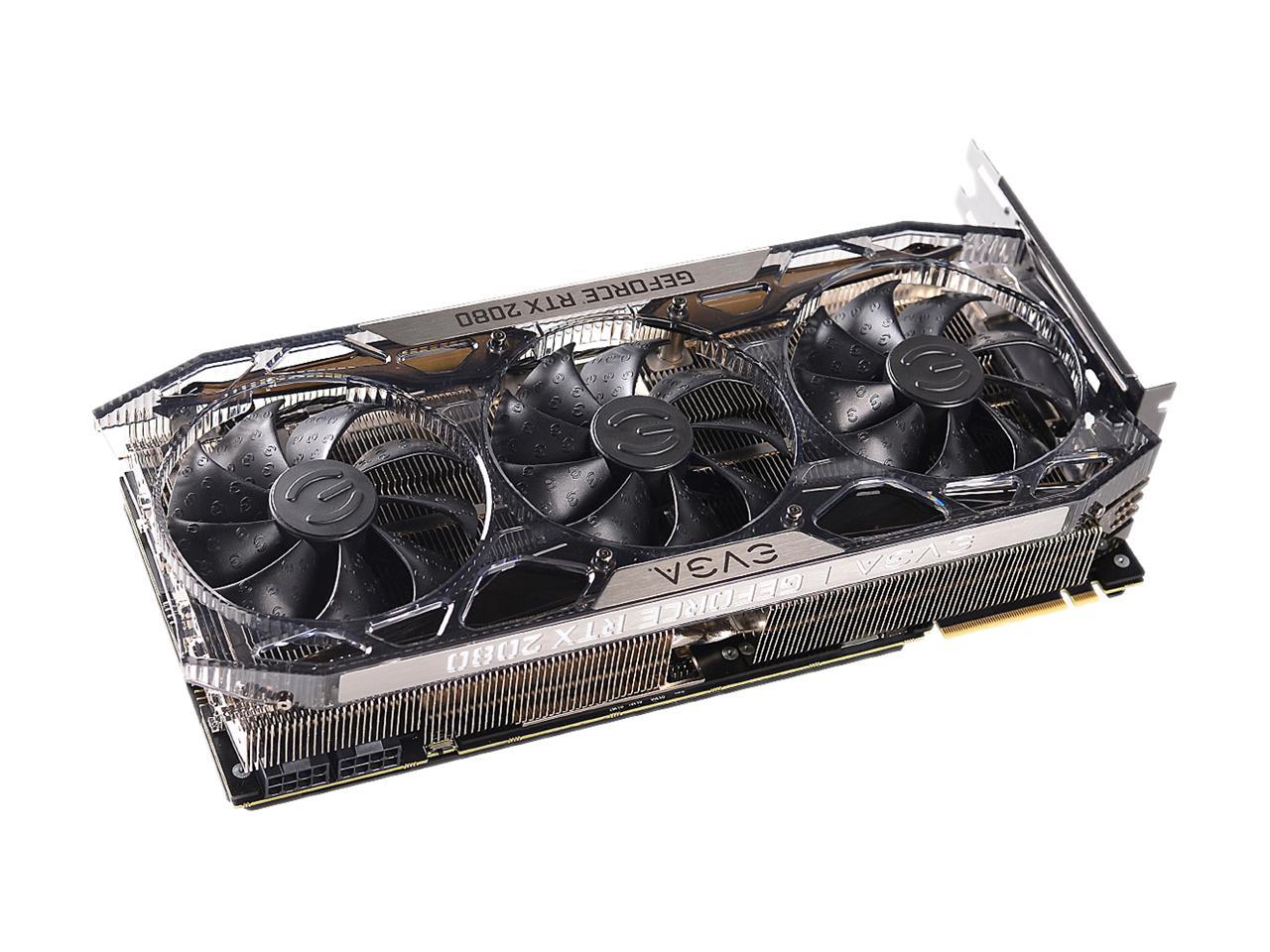 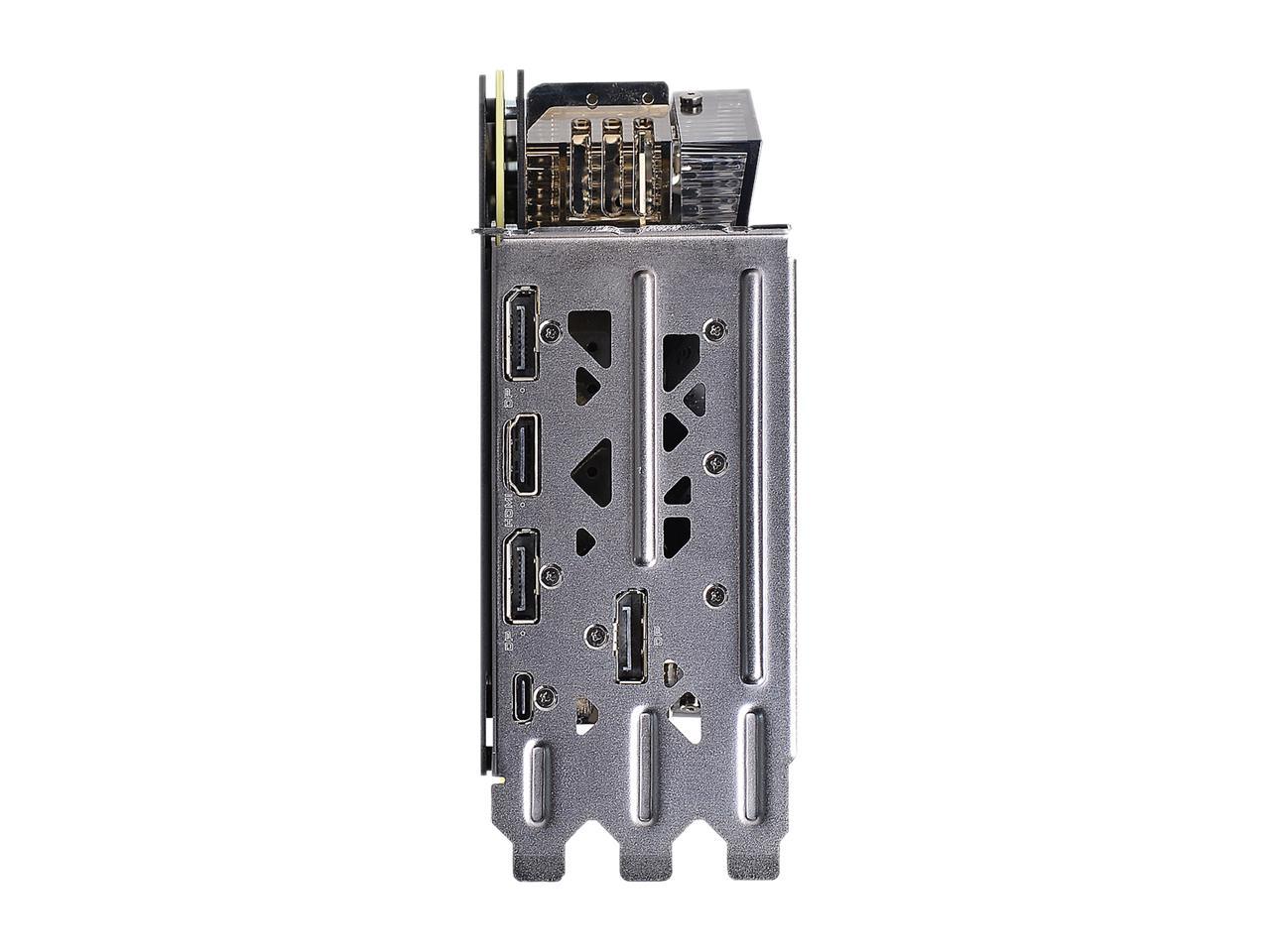 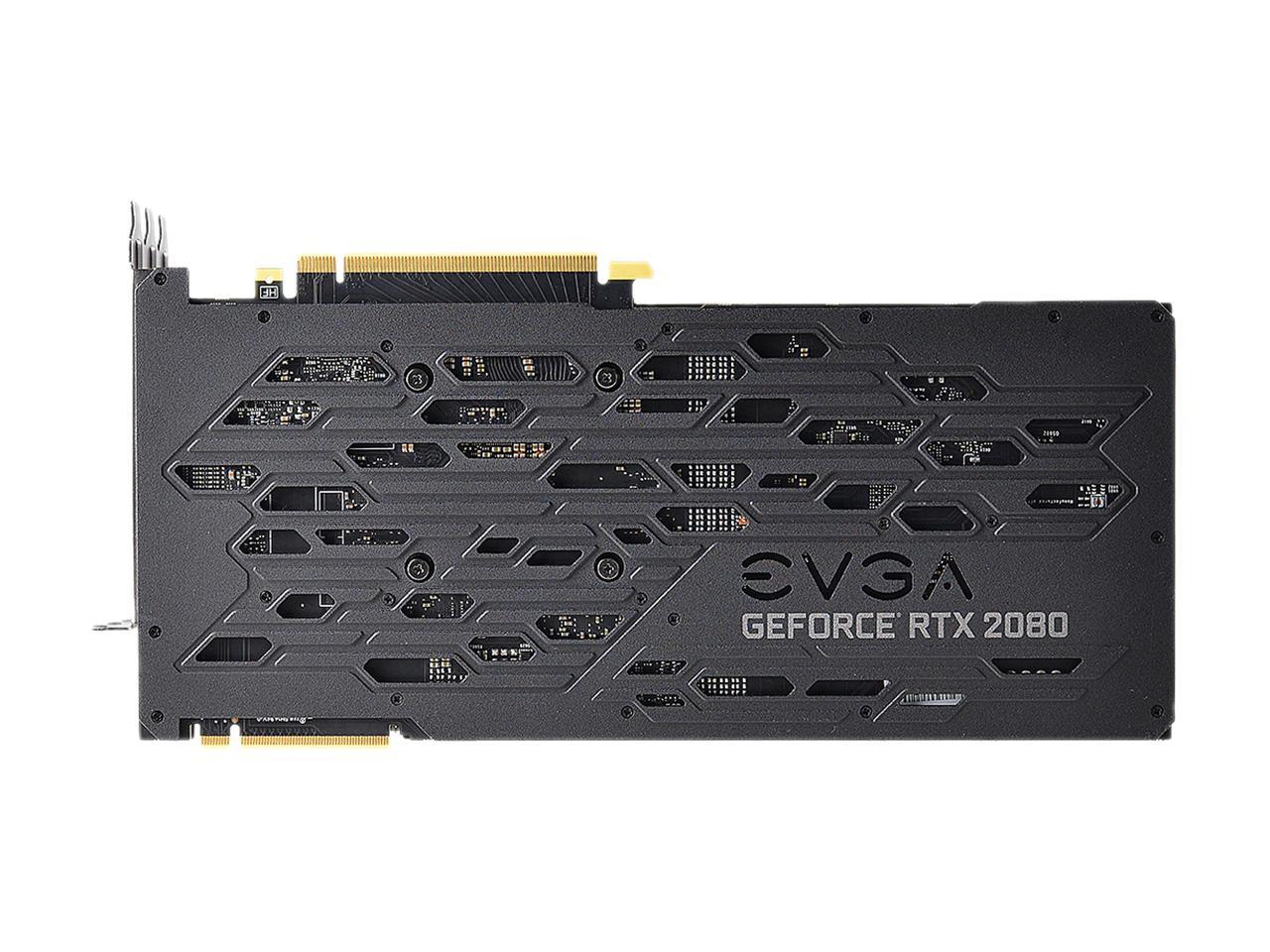 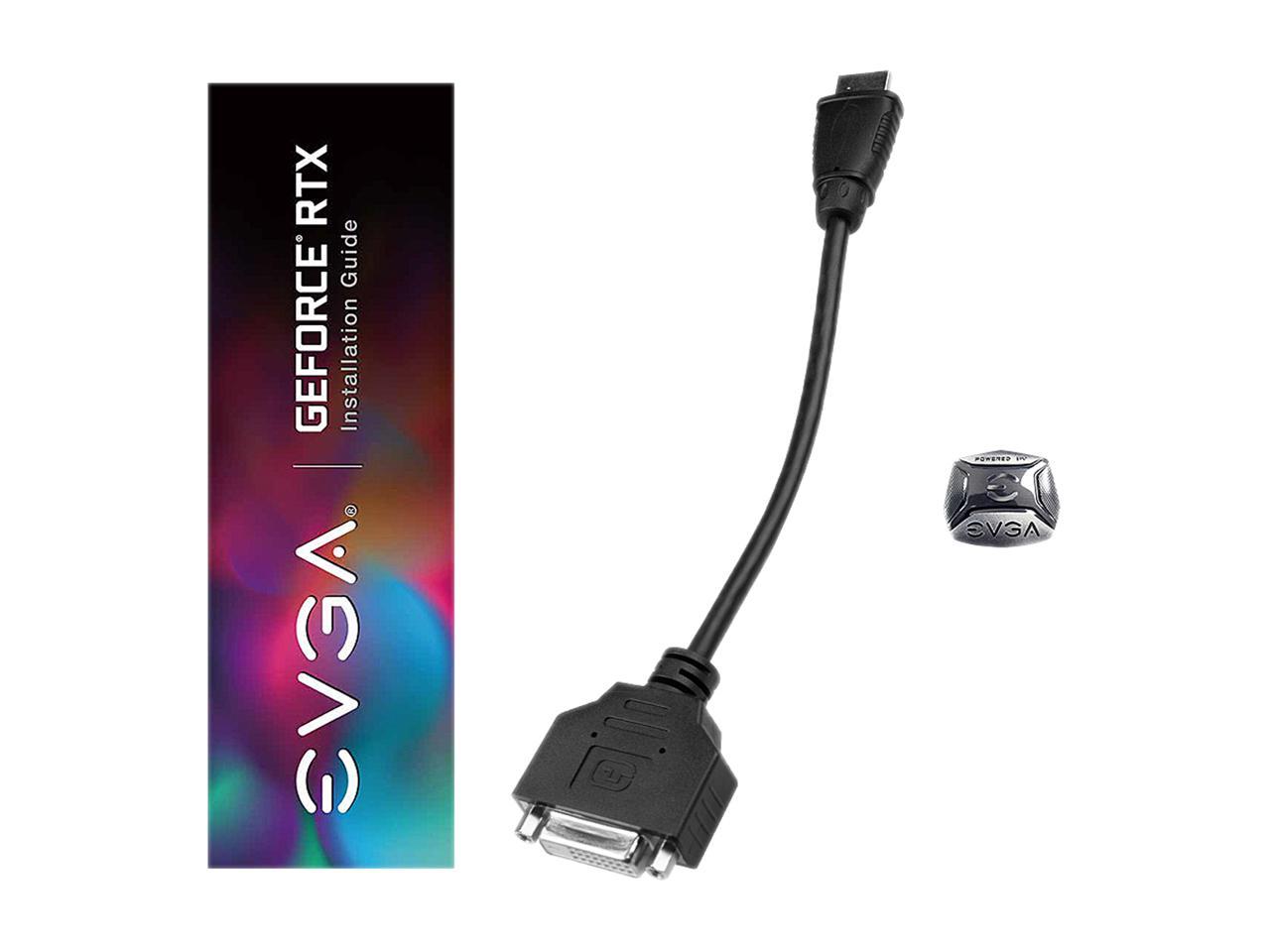 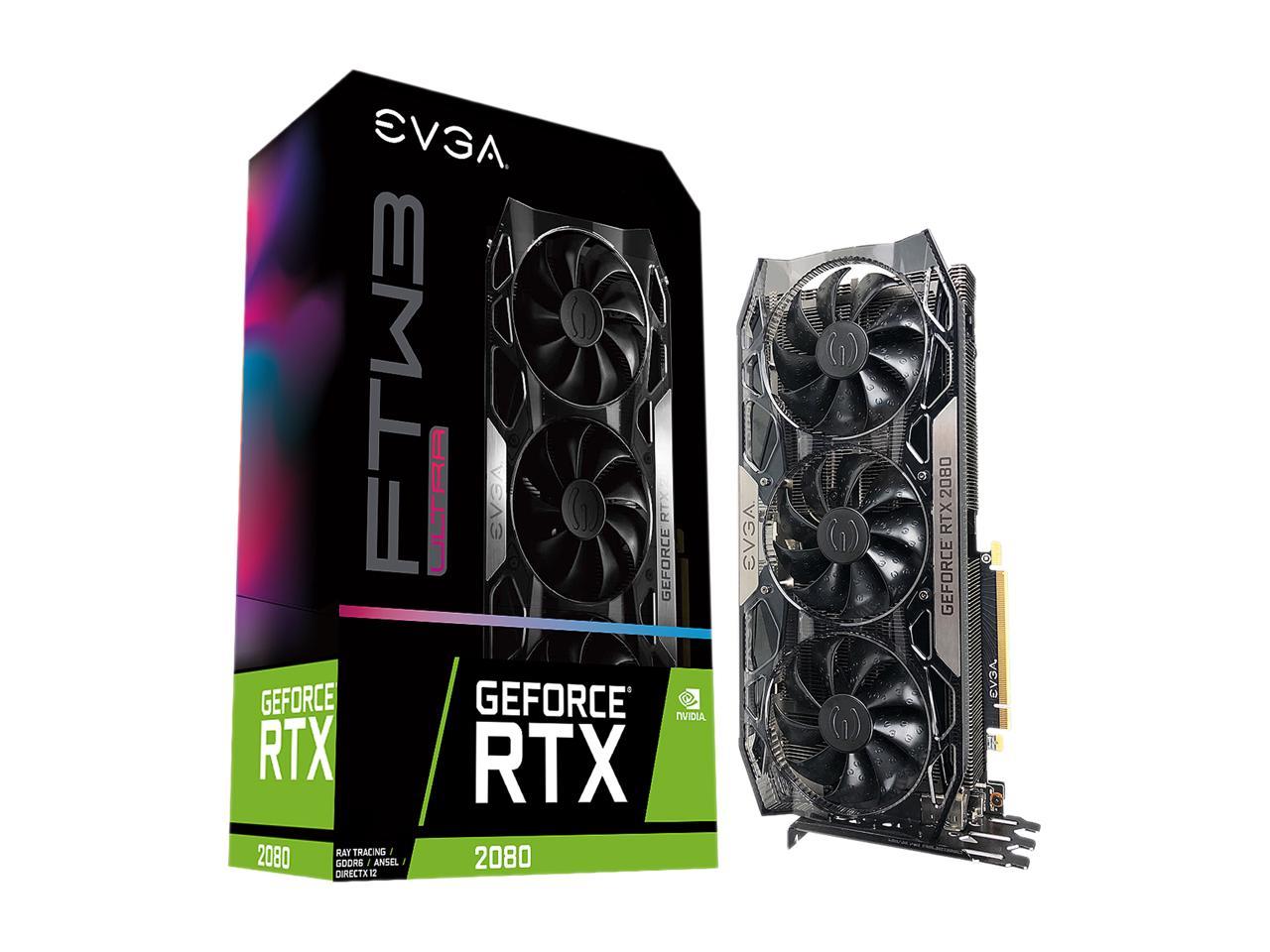 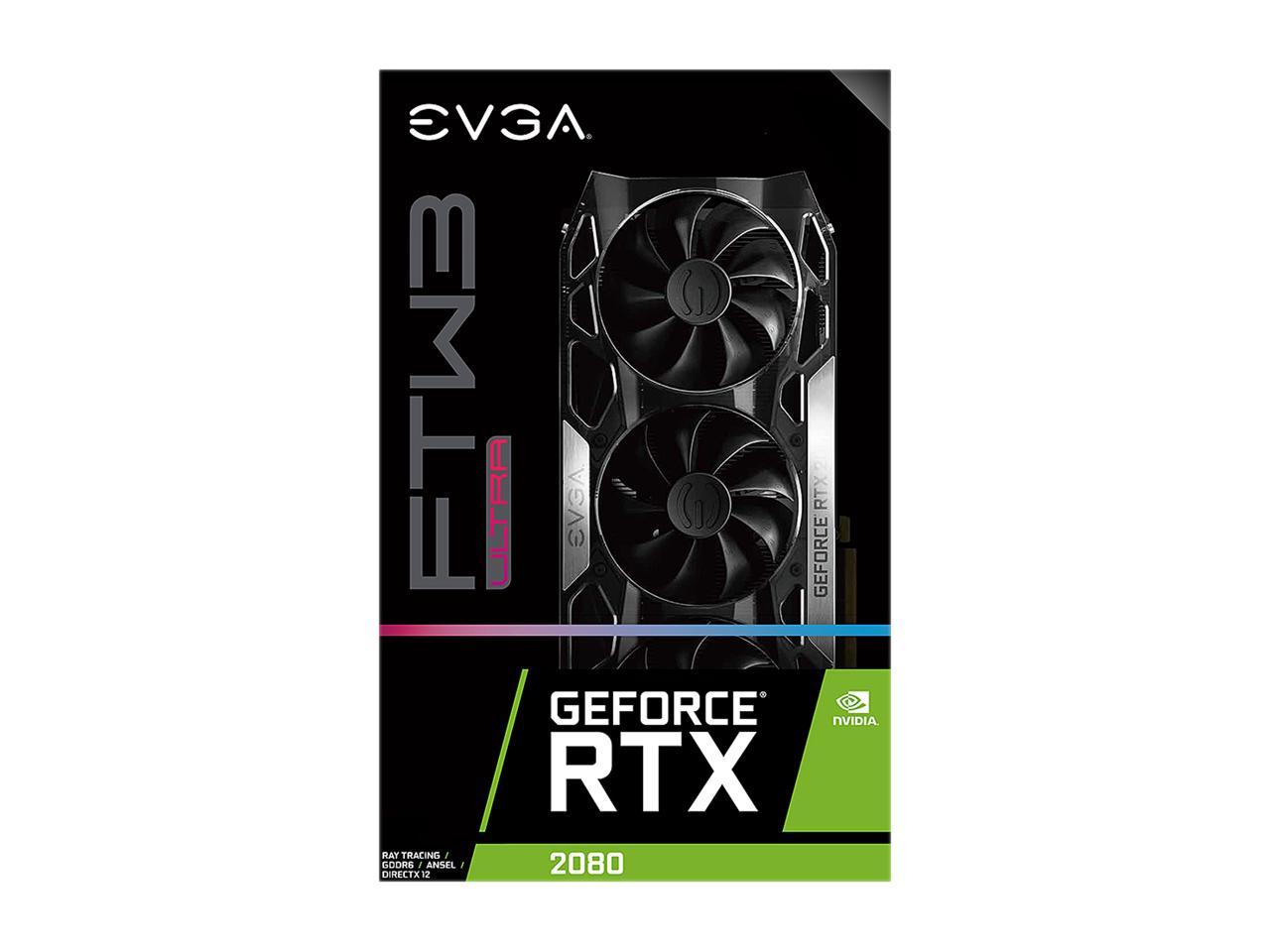 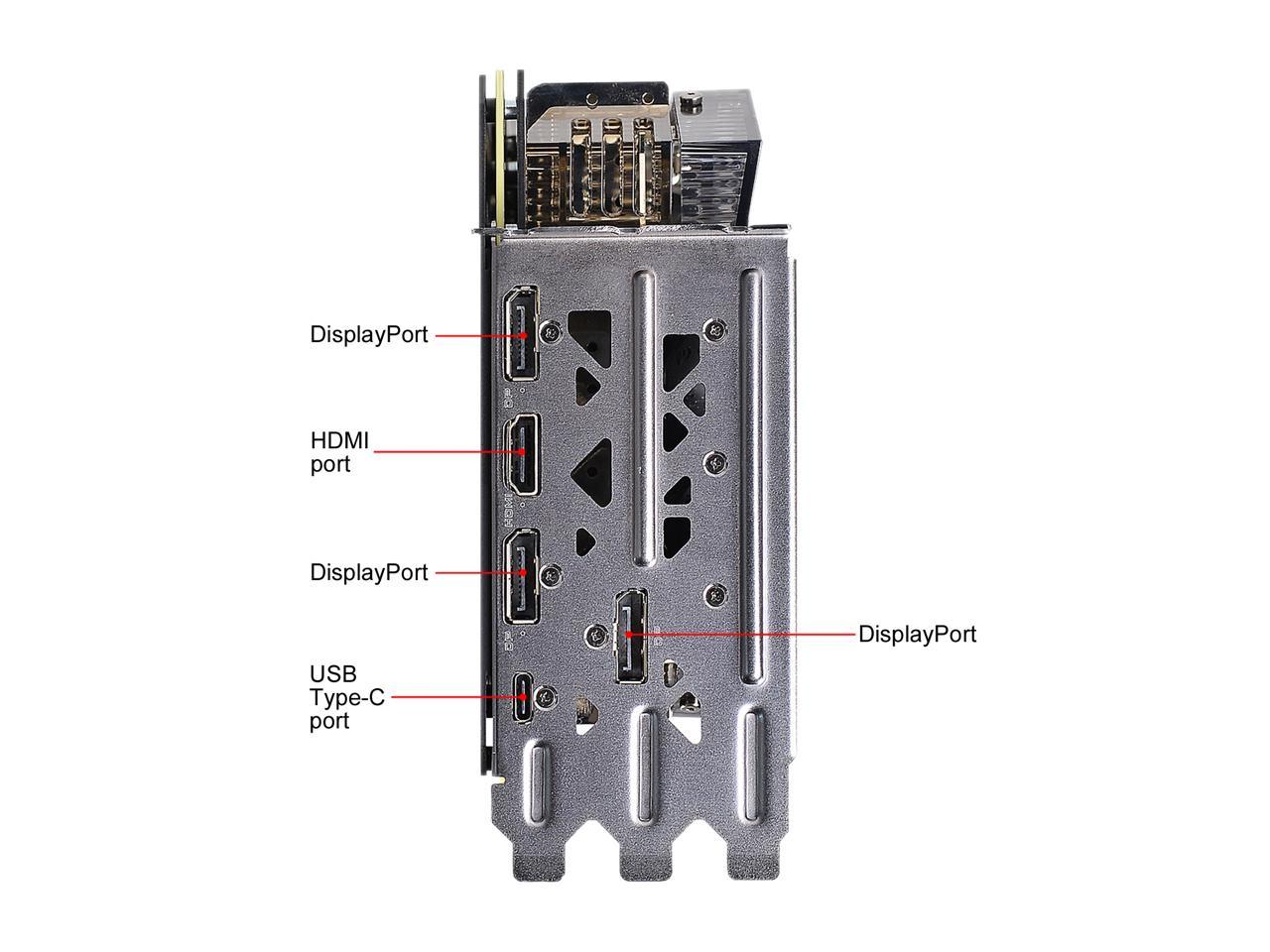 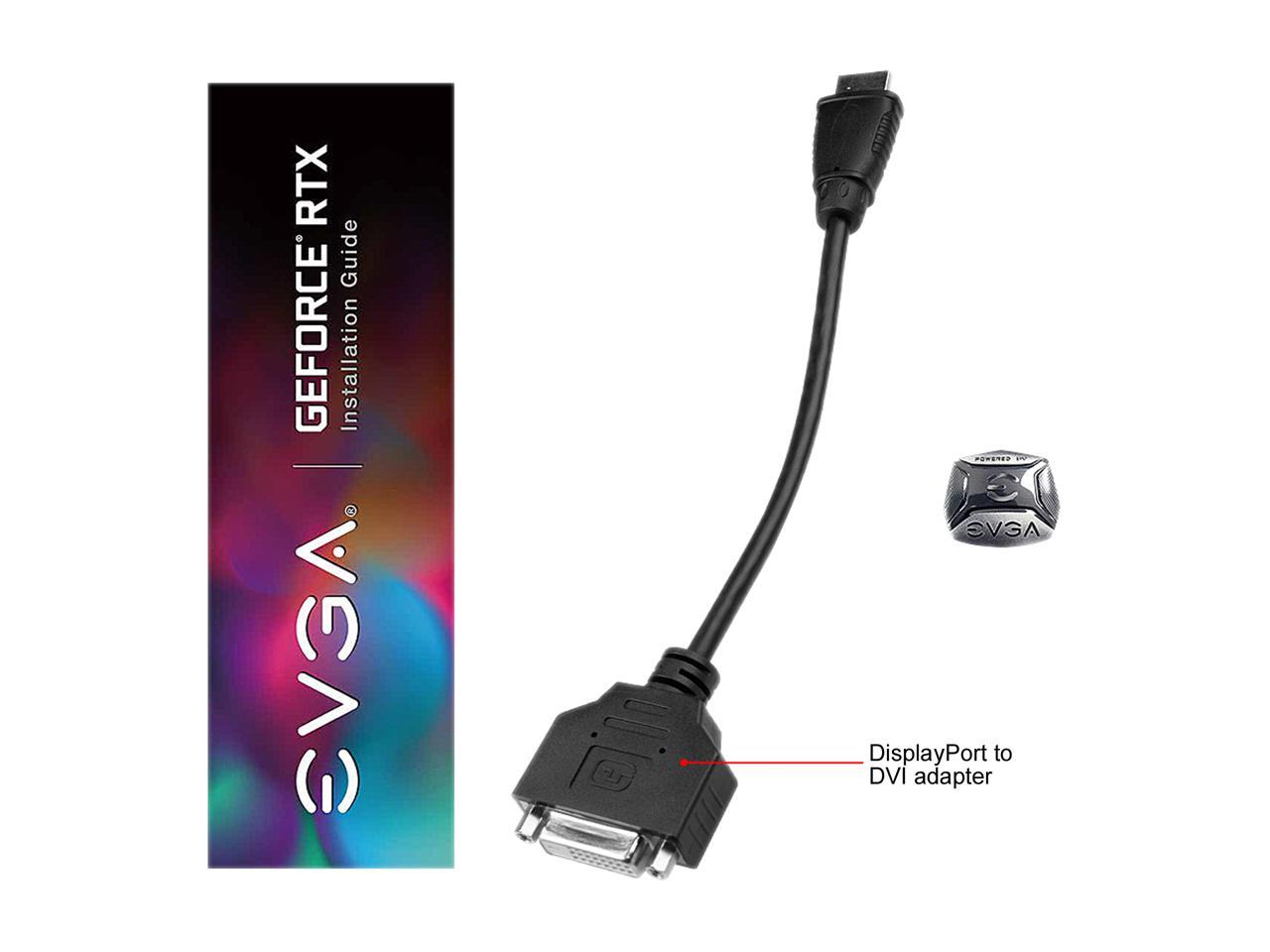 GeForce?RTX graphics cards are powered by the Turing GPU architecture and the all-new RTX platform. This gives you up to 6X the performance of previous-generation graphics cards and brings the power of real-time ray tracing and AI to games.

Up to
6X
Faster Performance

With the new NVIDIA Turing?GPU architecture and the revolutionary RTX platform, RTX graphics cards bring together real-time ray tracing, artificial intelligence, and programmable shading. This is a whole new way to experience games. Pros: EVGA offers a lot of value above a Founders' Edition. The higher power limit (130%), excellent triple fan cooling, and evolving & improving Precision X1 software make this one of the top RTX 2080 cards for an air cooled rig. The ability to monitor VRM, memory and GPU temperatures, as well as custom fan curves for each of the 3 fans is a huge plus. Also has a fan and RGB auxillary header on the card.

Cons: Make sure you update immediately to the newest Nvidia drivers before installing Precision X1 for the first time

Overall Review: EVGA's support in the early weeks was excellent, and the card runs reliably now.

Cons: Too heavy (gpu sag is easy overtime) Died after 4 days of normal gaming Nothing else really it’s just sad.

Overall Review: Sad that it died, was such a good product. Newegg refunded me and i’ll most probably get the hybrid ftw3 or an aorus version idk...

Manufacturer Response:
Dear Valued Customer, I do apologize for the troubles you are having with your EVGA RTX 2080 graphics card. I can assure you that we are here to assist and support you as best we can. If you haven't already done so, then I would encourage you to contact our 24 hour Technical Support team by phone 1.888.881.3842 and pressing option 1 or by email: Newegg@EVGA.com with your reference# 3310895 so that we can further assist you with warranty services if needed. Sincerely, EVGA Customer Support
Mike A.
Ownership: 1 week to 1 month
Verified Owner
Tons of power. Incredible cooling & OC potential.12/20/2018 10:08:20 AM

Pros: System: i7-3820 OC'ed to 4.7ghz 16 gig corsair dominator ram 128 gig samsung 830 SSD Asus P9X79 mobo Win7 64 Bit Case: Corsair Graphite 600T - Installed the card into my 6 year old, overclocked i7-3820 (4.7ghz) system. - Absolutely crushes anything thrown at it at 1920x1200 resolution. WoW, Battlefield V, BLOPS 4, Grim Dawn, etc on max settings. I realize the card is likely overkill for that resolution, but as mentioned, this was my 6 year old machine. I have to turn vertical sync on in everything to prevent tearing as my monitor is even older and only 60hz. I was upgrading from a Radeon HD 3GB 7970 card and the results give my machine new life. - Incredibly quiet, even when fans are cranked to 70%. WAY more quiet than the Radeon. - RGB is slick and purdy. Precision X1 software lets you customize the LED's, as well as the fans. - Overclock potential is there. Using Precision X1 you can easily OC the hell out of this thing. I have not done so as it's not necessary until I upgrade my monitor and build a new system. - Used the included DVI->HDMI adapter since my monitor has no HDMI/DP connections, and it recognized it and functioned properly instantly. - Fantastic packaging. - This apparently has some RGB headers on it if you want to plug in additional RGB fans and such to be controlled by Precision X1, but my machine has 0 RGB stuff in it. - Historic EVGA support & step up program & community.

Cons: - First con for most people would likely be the price. 9 bills is a lot to fork over for a video card, and the most I've ever spent on one. But I got 6 years out of my last card and I expect this one to last the same. You also get the great EVGA support with it. I am in the process of building a new system so buying one big part at a time. I look at video cards like monitors and even vehicles. Buy something that'll last. - This is an *enormous* card. I had to use my 2nd PCI-E slot because it would cover both of my smaller PCI-E slots that I use for my wireless card if I put it in the 1st PCI-E 16x slot. I was worried this wouldn't operate at the 3.0 spec for whatever reason, but it does and all is well. It is brushing up against some mobo connections at the bottom of my board but disasters were averted. It takes up 3 brackets on the rear of your case. Length wise, it is a few inches away from the HD bays. Check the sizes of everything if you're putting this into a regular mid-tower case. - Precision X1. This software is still in beta, so I don't expect perfection. The capability of it is definitely there to be exceptional, but in it's current state it is not great, Bob. It is not user friendly whatsoever. the program gives you no feedback as to what it's doing, or did, or anything regarding OC'ing. There's supposedly a one click OC function (the scan button) but I have no idea if the settings after it scans gets saved even using GPU-Z. The fans & LED are easy to figure out, but if it gave you more information on the overclock ability, that would be very helpful. Additionally, this program would simply not open at all in 64 bit Win7, and I had to spend a few hours scavenging the internet until I found a forum post by a guy that shared some 'Aero 2.0 net framework' plug-in that once installed, fixed the issue immediately.

Overall Review: It's been awhile since I did a major upgrade to my system and I was very pleased at how smooth it all went. I was concerned about it being in the 2nd PCI-E slot, about using a DVI-HDMI adapter, about poor old Win7 and new technology. The list was big, but I uninstalled the Radeon completely, took it out, put the 2080 in, display came up right away and ran the Nvidia driver package I downloaded earlier and I was all set within minutes.

Pros: Basically, the top of the heap as far as non Ti (GTX or RTX) video cards go. For 4k, high refresh, or wide screening, this card has you covered. The ICX cooling system is very quiet. Those coming from blower style cooling systems will look twice to make sure everything is working when they notice the lack of a hairdryer running in the room. The latest build of EVGA’s X1 software lets you do some auto-overclocking to get a few extra ponies of performance as well as to control the RGB LEDs on the top edge (which work just fine on my cars, shrug). If you’re going to play in the NVIDIA sandbox, EVGA is the only way to go, in my humble opinion.

Cons: It’s big. I mean I had to buy a new case big. Even if you have an older mid-tower style case or even just a congested case, measure twice before buying. For me, the upgrade to a modern computer case and out of my ancient Cooler Master, not to mention adding some effective and quiet AIO liquid CPU cooling, was a long time coming, so you’ll get no complaints from me. But be aware. It is costly and RTX features may never take hold as must-have features. But, if you’re building for the long haul and aren’t the one to upgrade every hardware refresh cycle, then it could be viewed as a nice future proof component of your build. If you are gaming on, and plan to keep gaming on, a standard 1080P monitor, this card is way overkill. Look into an RTX 2060.

Overall Review: I am running the RTX2080FTW3 with a 2G Dell/Alienware Ultrawide monitor and always see around 80 to 100 FPS with visuals on high in pretty much any modern game. Well within my tolerances for smooth gameplay. Sometimes higher, but for modern games I almost never see the needle pegged at monitor max, 120 FPS. X1 Precision gets me an auto overclock of +41, at which the card is completely stable. I hear of people getting higher, but I haven’t messed with fan curves or the like. Honestly, for just a few extra FPS, it isn’t worth my time or effort. Games are perfectly fine at stock settings.

Pros: Amazing cooling and more than powerfull enough to drive most anything you could want. The card looks objectiveley great in person and is very rigid for its size. On top of being arguably the best 2080 around you get the absolutely AMAZING coustomer assurance offered by purchasing a product from EVGA.

Cons: I had to RMA my unit by chance.

Overall Review: EVGA has in my opinion; the best, hands down coustomer service in the buisness. If you have any problems at all they will not just take care of you; but make you feel like a VIP coustomer. I will be buying EVGA products from now on!

Cons: - You WILL have problems with the RGB lighting, it will light up.. Most of the times...

Overall Review: I would not recommend this product for someone that want to have his RGB lighting to fit since it will not work as intended. It does it with everyone, just look at EVGA's forum. I'm still glad I bought this card because it filled my needs and I'm not really finicky with RGB lighting (do not really care at all) !

Manufacturer Response:
Dear Valued Customer, I would like to thank you for your feedback about your EVGA RTX 2080 graphics card. Should you or any potential EVGA customer ever have any questions or concerns with any EVGA product, then I would encourage you to contact our 24 hour Presales Support team by phone 1.888.881.3842 and pressing option 3 or by email: Newegg@EVGA.com so that we can further assist you. Sincerely, EVGA Customer Support
MARTIN L.
Ownership: 1 week to 1 month
Verified Owner
Great product and value for the price12/10/2018 9:36:25 AM

Cons: -slightly overpriced because of demand right now -way too expensive if not going to be used for overclocking.

Overall Review: i would definitely recommend it to people who don't want to commit to the 2080ti but still want amazing performances. This is a great alternative and it has some headroom for OC