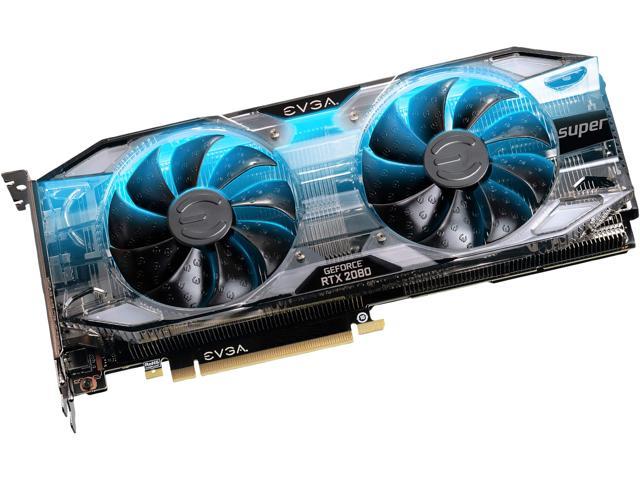 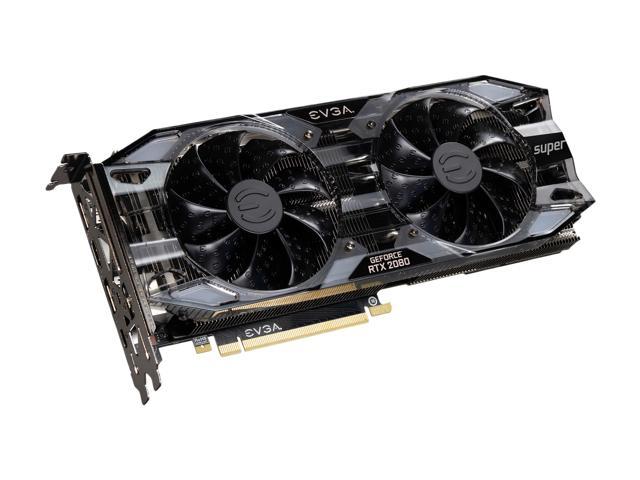 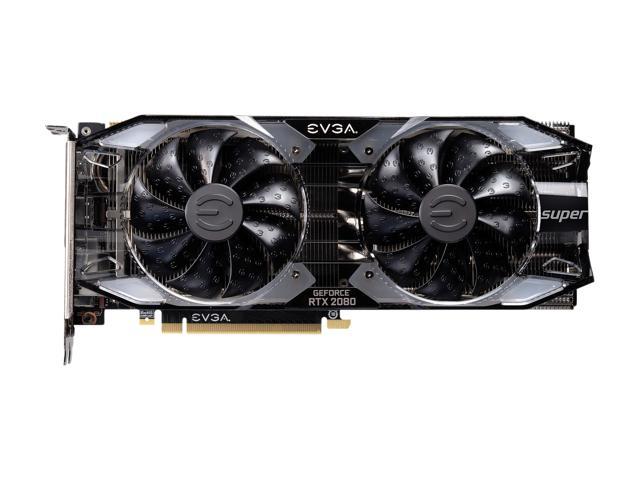 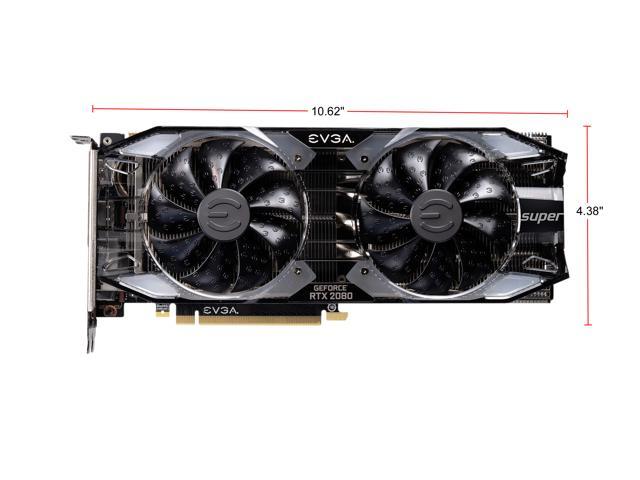 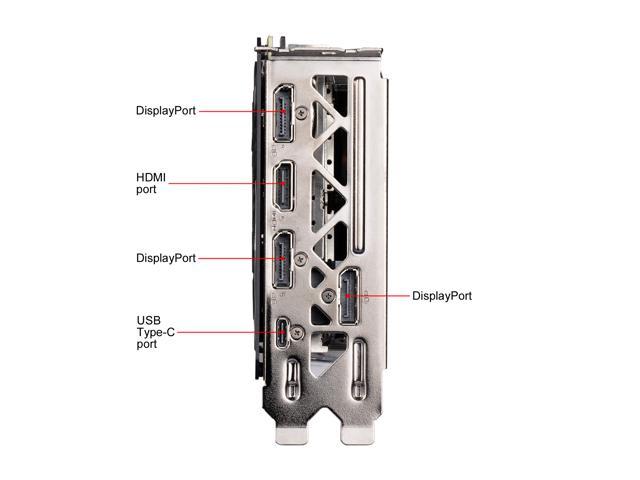 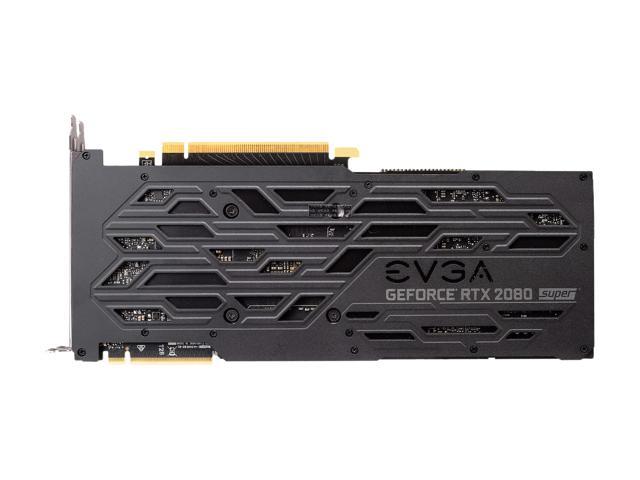 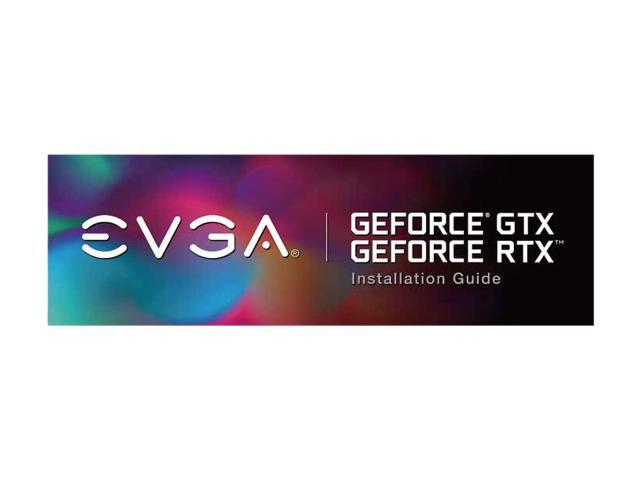 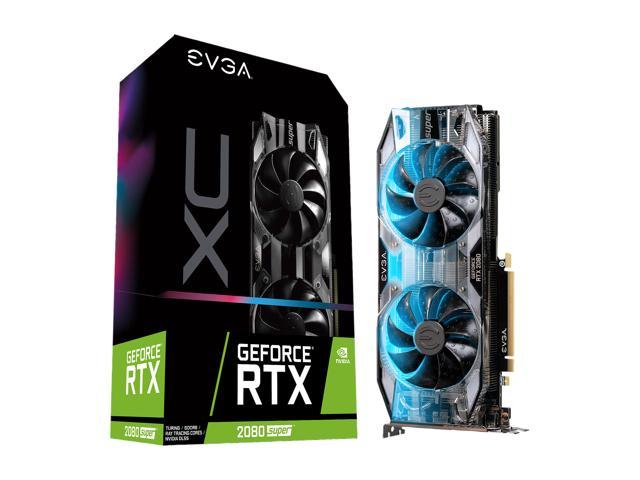 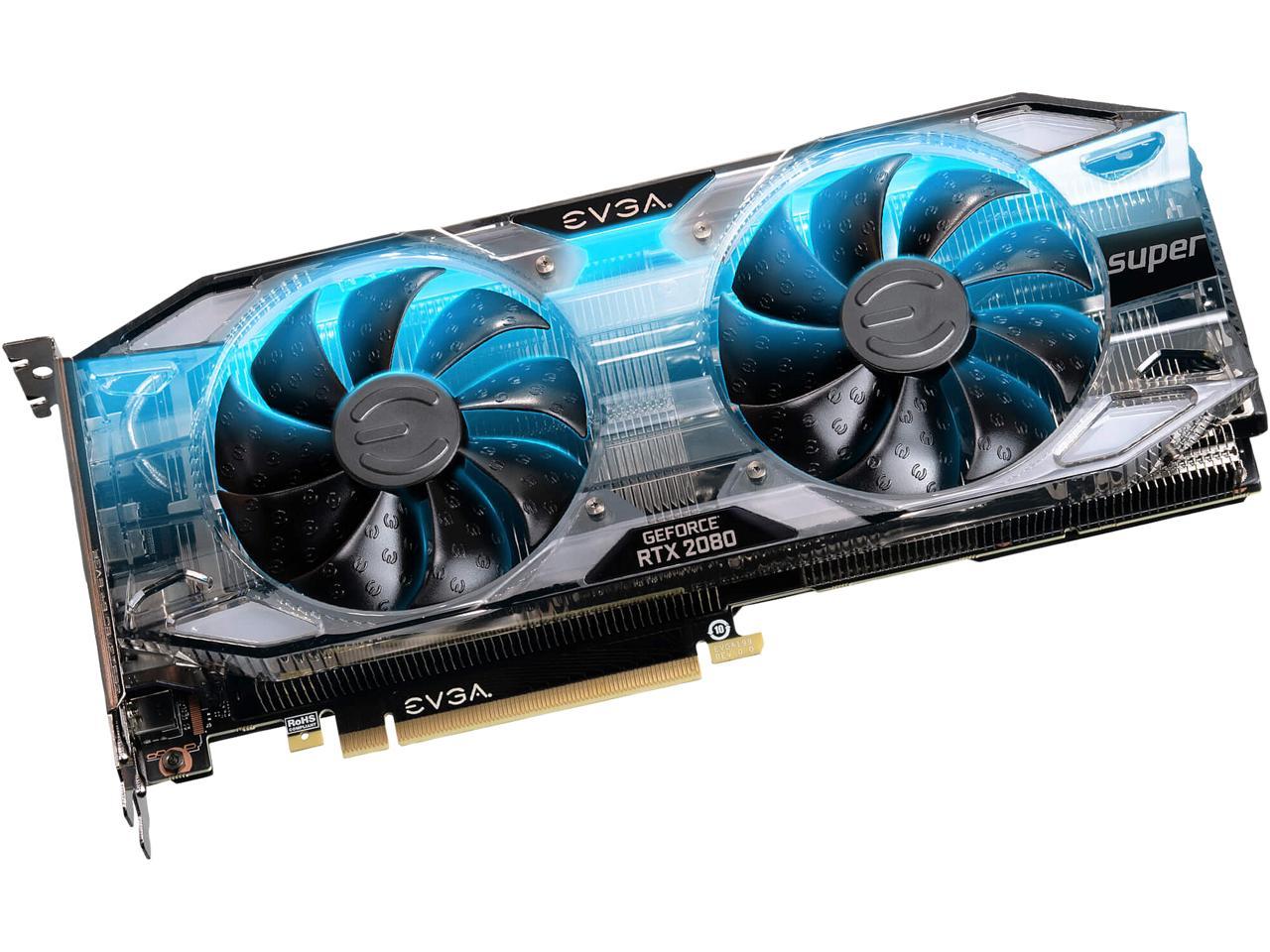 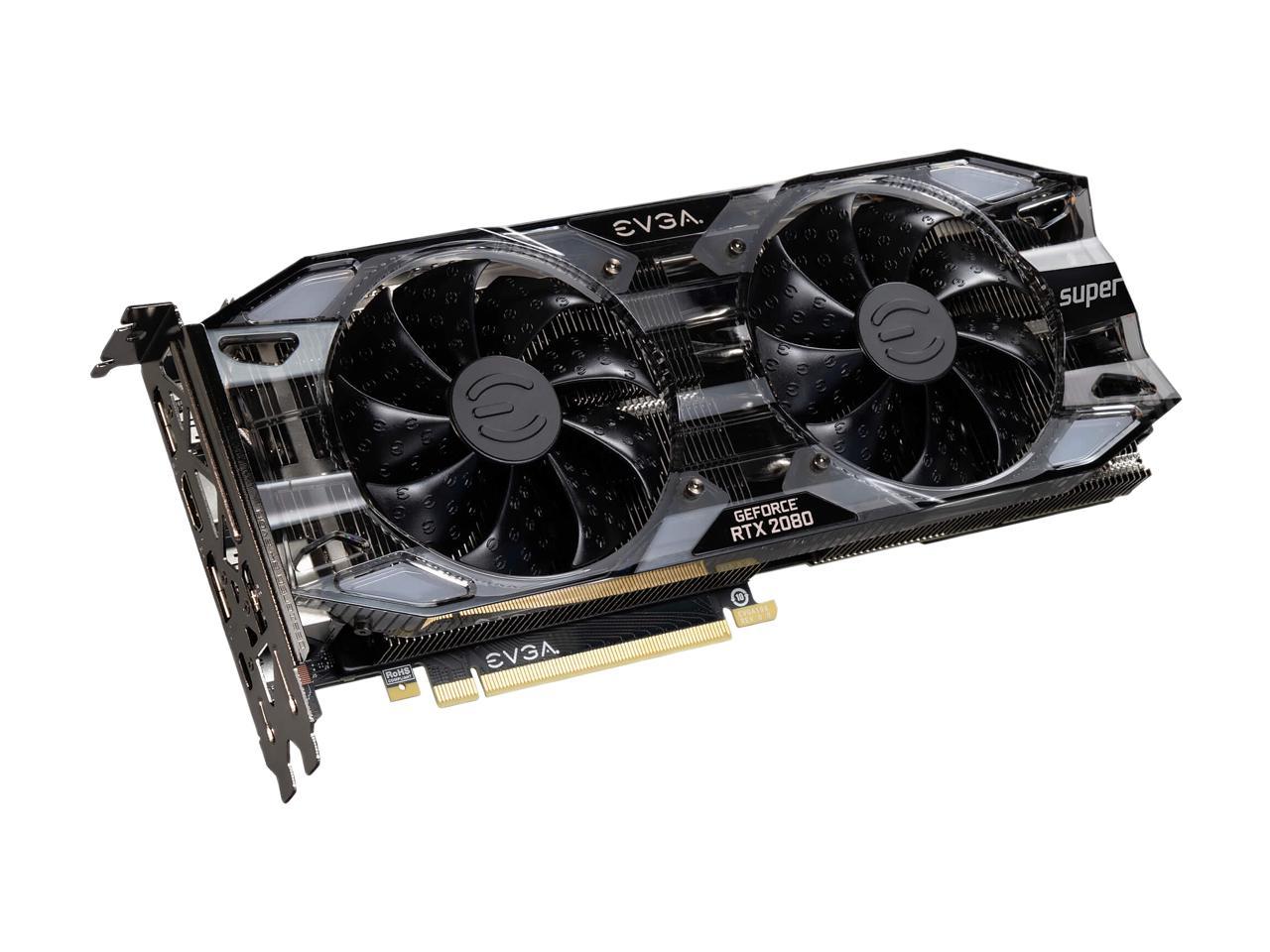 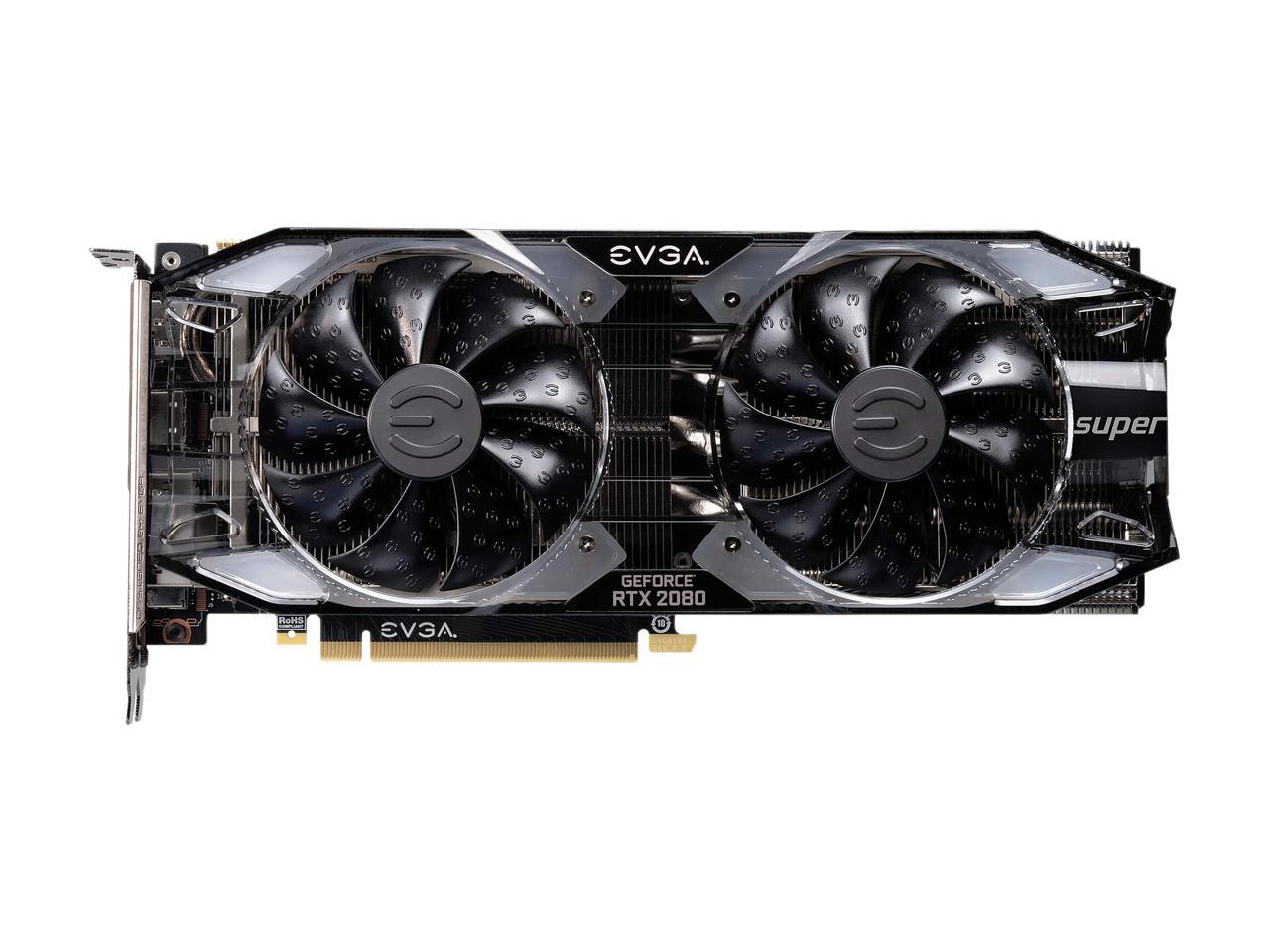 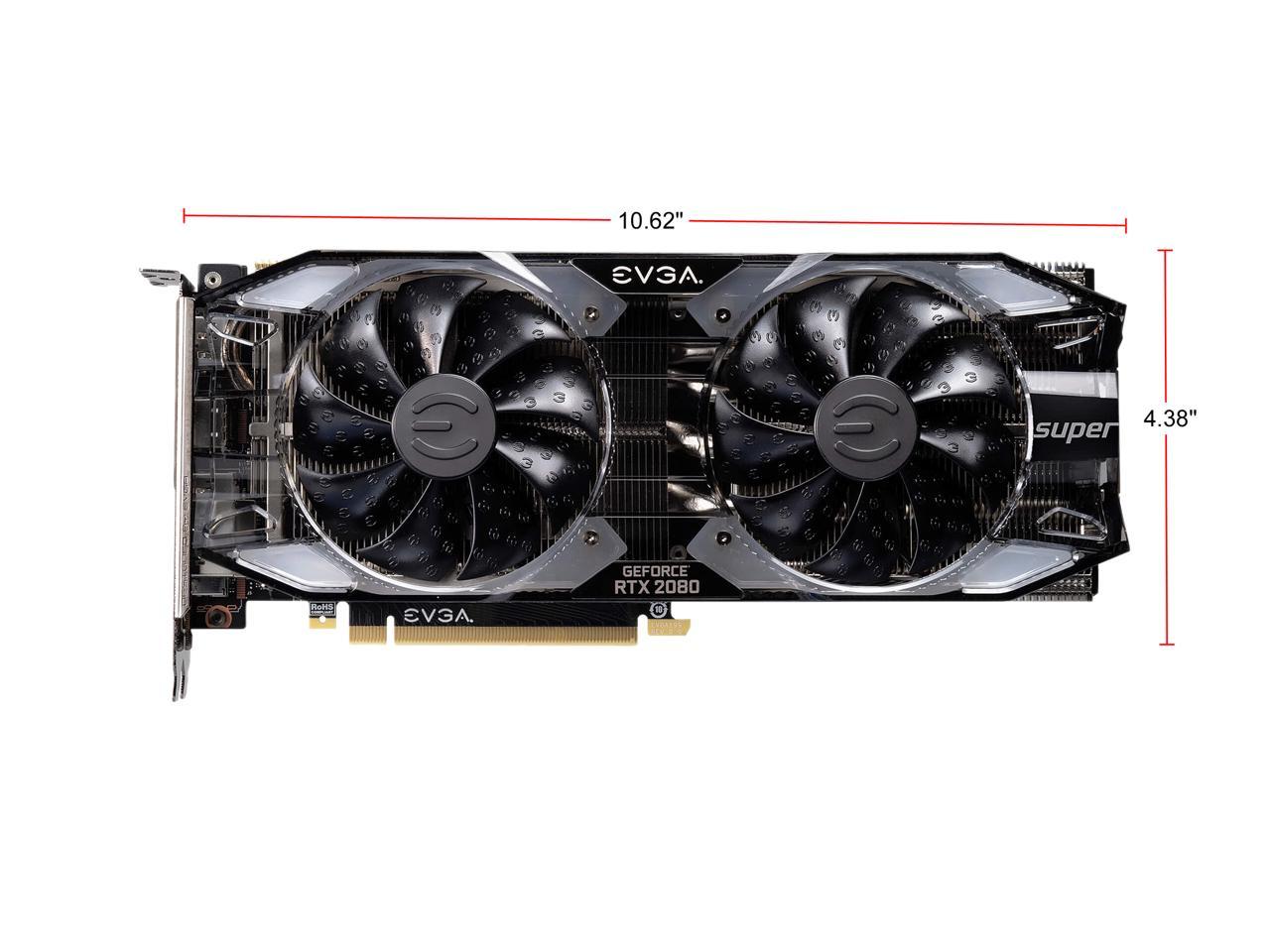 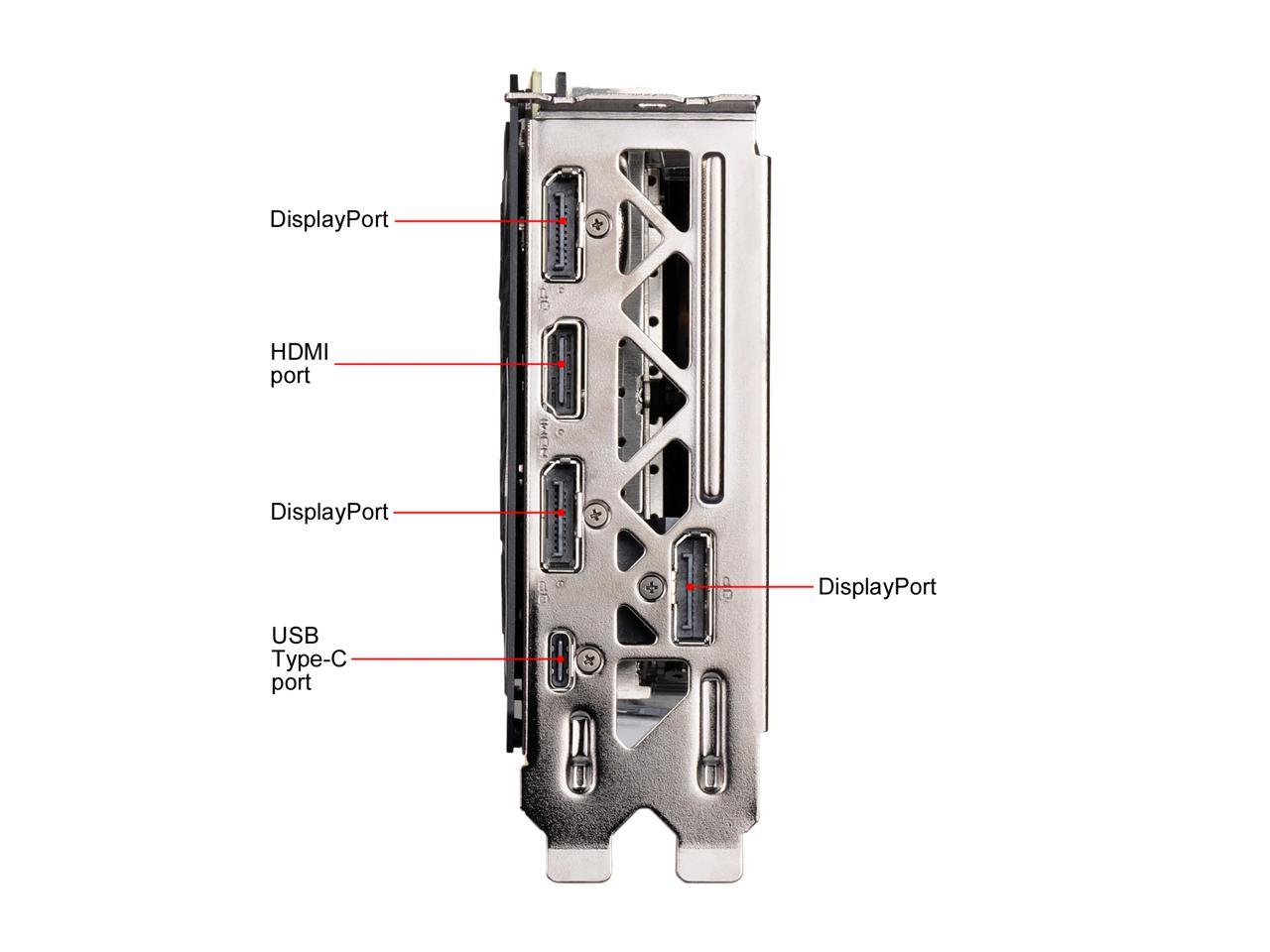 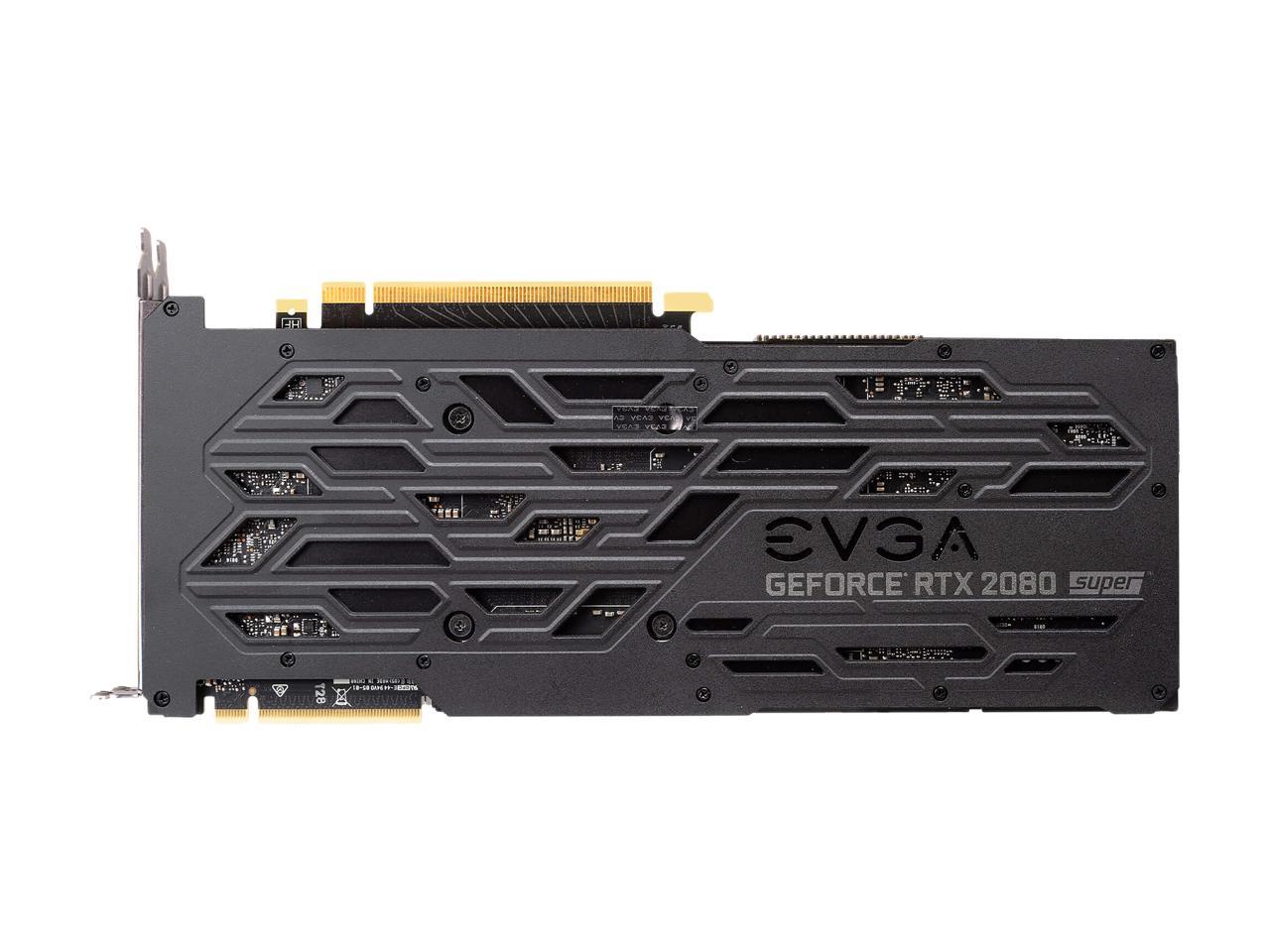 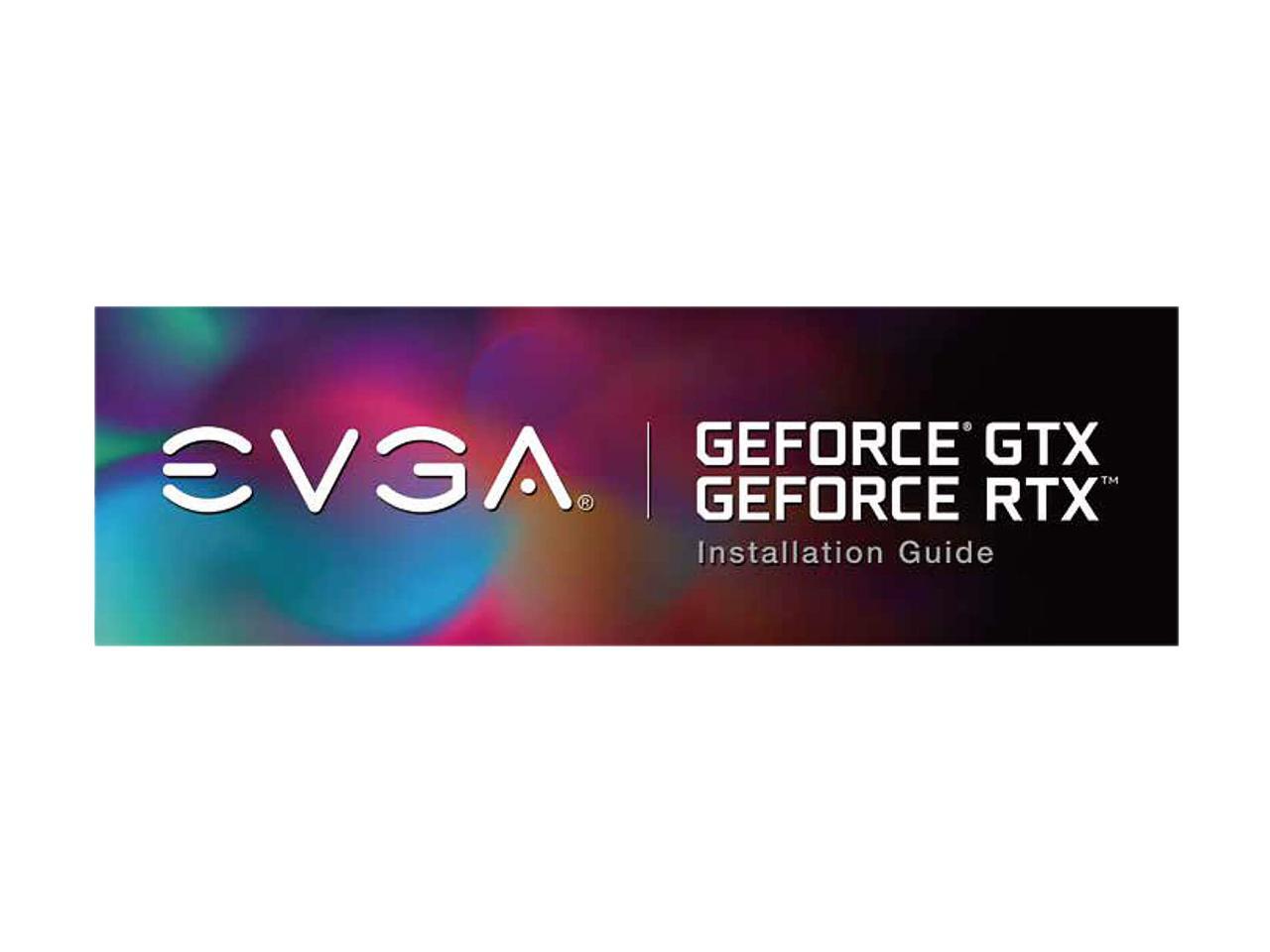 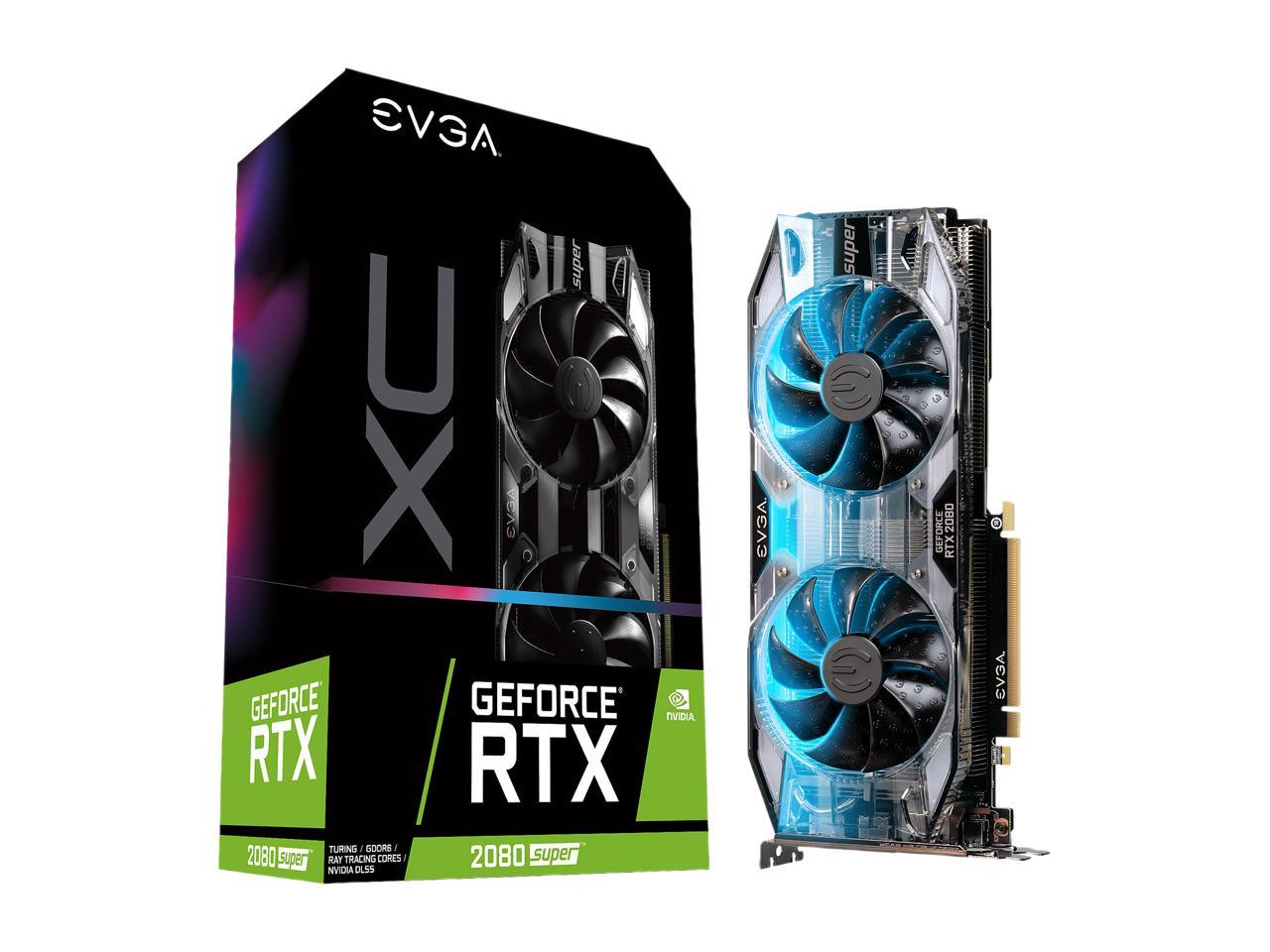 GeForce® RTX™ graphics cards are powered by the Turing™ GPU architecture and the all-new RTX™ platform. This gives you up to 6X the performance of previous-generation graphics cards and brings the power of real-time ray tracing and AI to games. Pros: Bought this to pair with a i7 9700k and 1440p 144hz monitor. Plays Heroes of the Storm and Doom maxed out around 180 fps. Installed Battlefield 5 and while I'm not sure of the fps, it's very smooth on Ultra. Wolfenstein Youngblood looks amazing. Very happy with this gpu. Was going to get the Gigabyte Aorus to pair with my Aorus Master mobo but I'm confident EVGA will backup its warranty if need be. Temps seem to be reasonable and half the time, the card doesn't even need the fans running.

Cons: Only con as of now is every now and then it has a light coil whine. Was told this may go away in the future but it's not a big deal for me. Only happens under heavy load.

Overall Review: This is the first (near) top of the line card I've ever had and it's amazing. Good work EVGA!

Pros: -Maxest of the max settings at 1440p while still maintaining 100+ fps in games -Mostly max settings at 4k while staying near or above 60 fps in most games -LED's are nice and not over the top -Slimmer and lighter than the "Ultra" or "FTW" versions -Roughly 5-10% faster than EVGA's 1080ti at higher resolutions

Cons: -Louder (at max load) than the "Ultra" or "FTW" versions due to smaller heat sink and reference PCB. -EVGA's Precision X software works but is not as polished as MSI Afterburner

Overall Review: This is my 3rd EVGA card. Previous card was the 1080 FTW2. Very happy with the purchase. EVGA Precision X software is still hit and miss especially with the UI. However it is a mandatory download to unlock the voltage and change the LEDs. I download the Precision X for this purpose...close it completely... then use MSI Afterburner to do the actual overclocking and tinkering. Overclocks reasonably well. Can max out at around +150-160 at the core without artifacts popping on the screen and memory can be maxed out all the way without issue. You will run out of power limit before you can overheat the card via voltage and the core isn't stable to get to that point anyways. I run this card stable (Using Heaven, Firestrike, and UniEngine benchmarks) with +55% at the voltage / +150 at the core / +650 at the memory. Temp never goes beyond 75-80 degrees under load despite the smaller heat sink and factory PCB. While this causes the fans to spin up a little more, it can be remedied a bit by creating your own fan curve and/or having a case with excellent thermals. At worst the fans spin up to 80% of max at 80 degrees before these temps stabilize under full load. Buy this if you can. Better value than the 2080ti IMO unless you are strictly a 4k max, 60+ fps only, nerd. Even then, depending on the game, this card is up to the task. Probably don't buy this for anything less than 2k Resolution.

Pros: The power in this card is AMAZING! Not as expensive as a 2080 ti.

Cons: RGB doesn't syn with the rest of my system

Overall Review: I bought this because the 2070 Super was out of stock and I refused to buy a 2060 Super or a 2080 TI. It took it's dear sweet time getting here but the card runs great. It's fast, it's quiet and it just barely fit in my case. All of the requirements needed to make me happy. My only complaint is that the RGB's won't stay the color I selected (purple) unless the EVGA Precision app is open

Overall Review: If you're trying to get amazing performance but don't want to spend 1.2k on a ti, this card is great! Newegg made the shipping process pretty painless, and there weren't any shipping mistakes or product defects, that I know of! Make sure you have good cooling in your case, though. The RTX 20 series and other high end cards tend to run hot, but obviously, that's normal. I would 100% recommend this card if you have the money and want the performance!

Overall Review: This card fits nicely in my Razer Core X Chroma eGPU enclosure. It runs VERY quiet and cool even in my non-air conditioned environment. The performance is amazing and dramatically boosts the graphics performance of my Razer Blade Stealth (2019). Razer support said the SUPER series cards were not okay to use with this eGPU but it works flawlessly.

Pros: - Runs at 75 degrees under max prolonged load. - Destroys any game at 1440p ultra settings (so far). - Boosts to 1950 MHz out of the box before any tweaking. - Dead silent while idle or performing light tasks. Quiet under load. While playing most games, the fans run at about 60-70% with the stock curve. You do hear the fans when the card is under load if you do not wear a headset, but then again...who does that? I have to say that I am really sensitive to annoying little sounds and I have no problem with this card. No coil whine. - EVGA. Probably the biggest Pro of the list. Reliable and you know it.

Overall Review: - Beast of a card if you want to game at 1440p @ 144 Hz. You get the EVGA brand and reputation for quality and good customer support, which to me might be the biggest selling point. Definitely recommend it if it is in your price range. Other thoughts : Hard to tell the difference with a regular 2080 at first glance (visually). The "Super" stickers are rather small and inconspicuous. Might have liked for them to be more noticeable, but honestly it's not a big deal.

Pros: - the card is faaaast (my previous one is a maxwell GTX 980) - 2.0 slot width and reference PCB long (very convinient for smaller builds/cases) - RT graphics (on control for example) is very nice feature, performance wise is very flexible, (am playing on 4k - Graphics setting on Ultra w/no AA - RT option on normal - DLSS off) and am getting 70-75 fps, i dunno about other games, haven´t tested others yet. But sure as hell this game is very well optimized and runs incredibly well with this card. I have an i5 -4690 k devil´s canyon overclocked to 4.2 ghz to complement my rig setup. GPU load gets to 99% very often, so no CPU bottlenecks here. - RGB lighting is nice, minus the "SUPER" part wich seems like a cheap added sticker (this second part should be at cons). -noticeably good build quality (well, we are speaking of EVGA)

Cons: - At first glance The backplate doesn´t seem to be from metal, the sound from a screwdriver from metal hitting the backplate creates a weird sound, not the usual one when you hit metal with metal... it does look a bit sturdy tought, even the paintjob for the backplate looks just not usual... the hell, my first GPU with a backplate so what do i know right? - The TDP shows how power hungry the card is, on my first 30 minutes gaming test the card got to 81°C!!, stock fan curve BTW - @268 watts as max. output!!, beware with you power supply. - The heatsink does not push alot hot air to the back of the case, instead, almost all goes back to the case, so if you plan to buy this card, you better get a good airflow case/fans. On my configuration, the hot air from the card goes away from the case between the back and and the last upper fan. - Stock fan curve from precision X1 really SUCKS, temps went up to 81-82°C on my first test on my old Thermaltake mid-tower. I play on a 4k TV, so am relatively far from the chassis, meaning, i have no trouble with the overall system noise at mid or full charge, of couse i had to re-set the curves for all the new chassis fans, temps went down. It´s mid-summer here and my max temps now fluctuates around 73-76°C.......definitly a good change. Had to stick to to MSI afterburner too since presicion x1 OSD does not work, no troubles at all since that change.

Overall Review: First thing first, delivery and shipment were incredible fast. The newegg express eggsaver works perfectly. i made the order on tuesday by midnight, the card arrived by thursday morning (less than 2 days later), consider that i live in Chile!! The packaging was very well built, had no problems at all. I was a little skeptical about the delivery, because i was told that the card could be held on custom, but i didn´t happen in the end. About the card itself, i come from a marvelous experience with a GTX 980 SC ACX2.0, that is still performing strong and i wanted finally to step up to 4K gaming because i had the money. I knew that i had to be on the enthusiast range, and on the red side there´s no a real support on Ray Tracing and not enough horsepower to display 4K gaming on the 60FPS range or more, at full-ultra settings , sooo i looked closely on the older brother; the RTX 2080, but then came the refresh for 2060s-2070s and this model was just announced, so i waited until i could buy it. There are some models here on my country, but not this one, so i decided to bought it here because i feel in my case given the models vs how much they cost and my previous experience with EVGA, that this was my best bet, like some say, best bang for my buck.. What i don´t fully understand is the fact that big part of the community says or recommend that the right GPU to use on 4K is the 2080ti. This card is 17% faster than the 1080ti according to Tomshardware (which is already a good card to start on 4k gaming BTW), am just beggining my experience with this card, so go figure what may happen in the future for me, but games like Control plays really well on 4K on max settings with this card (see pros for detalis), so i expect that trend to last for a few years at least on the vast majority of games to come, including more RT features too, so i think you DONT NEED to spend 1200+ USD on a 2080 ti to see this level of performance, and That´s a fact (at least for now). So far, am very happy with the card, as long as it has the built quality that EVGA is known for, i guess should not have a problem... EDITED the whole review, to acknowledge the whole experience now almost 2 months later of normal use