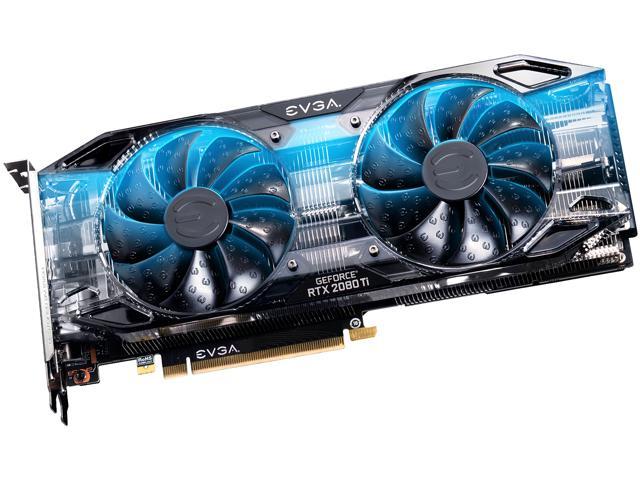 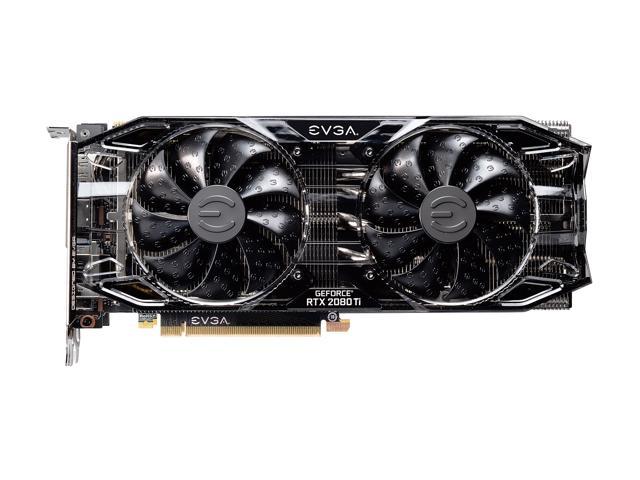 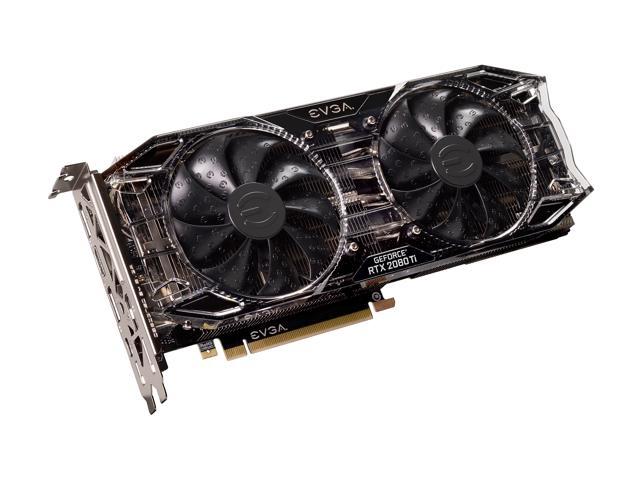 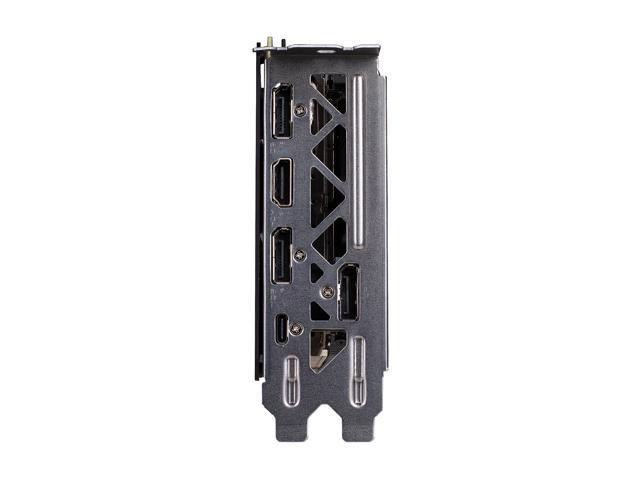 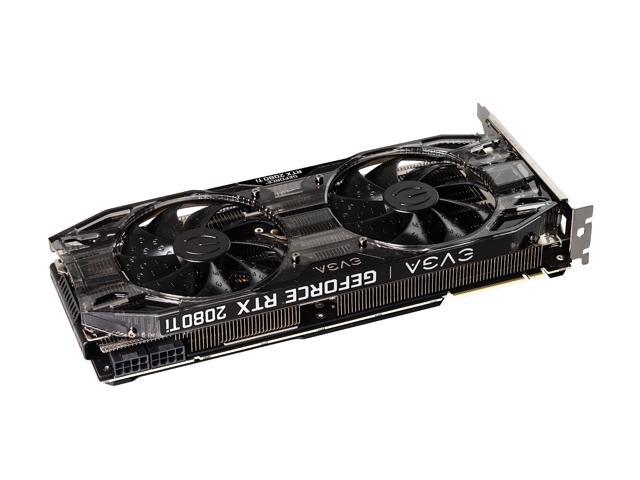 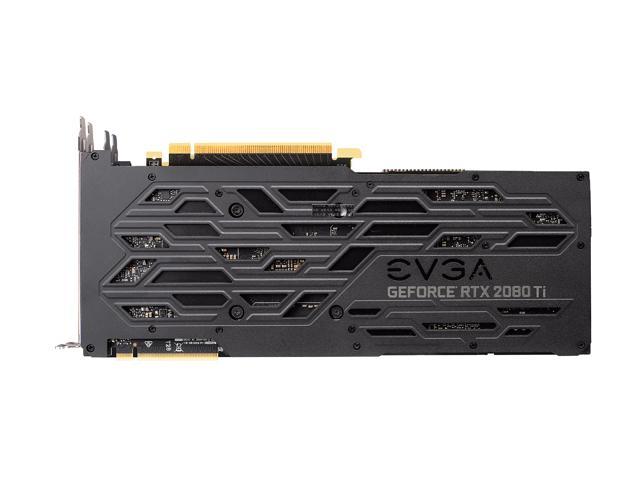 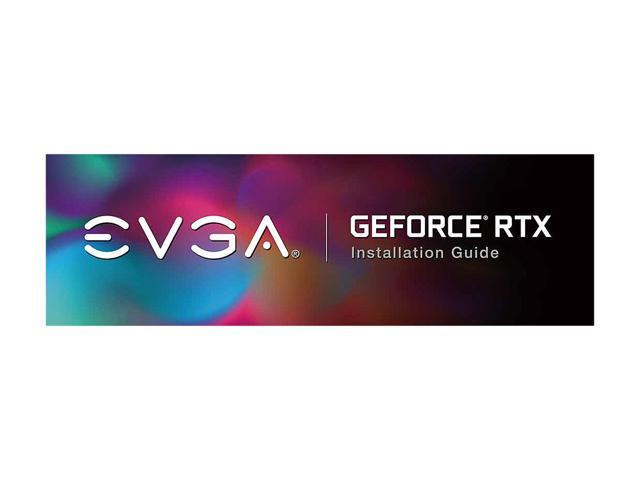 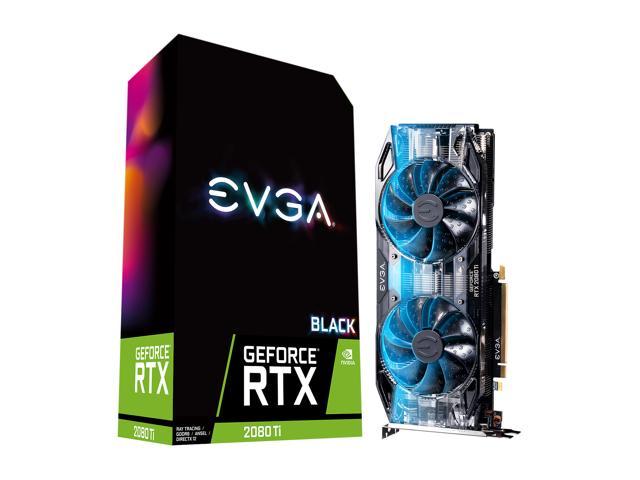 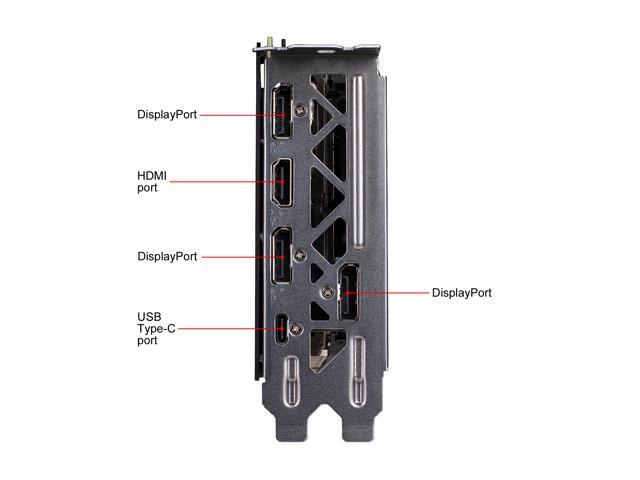 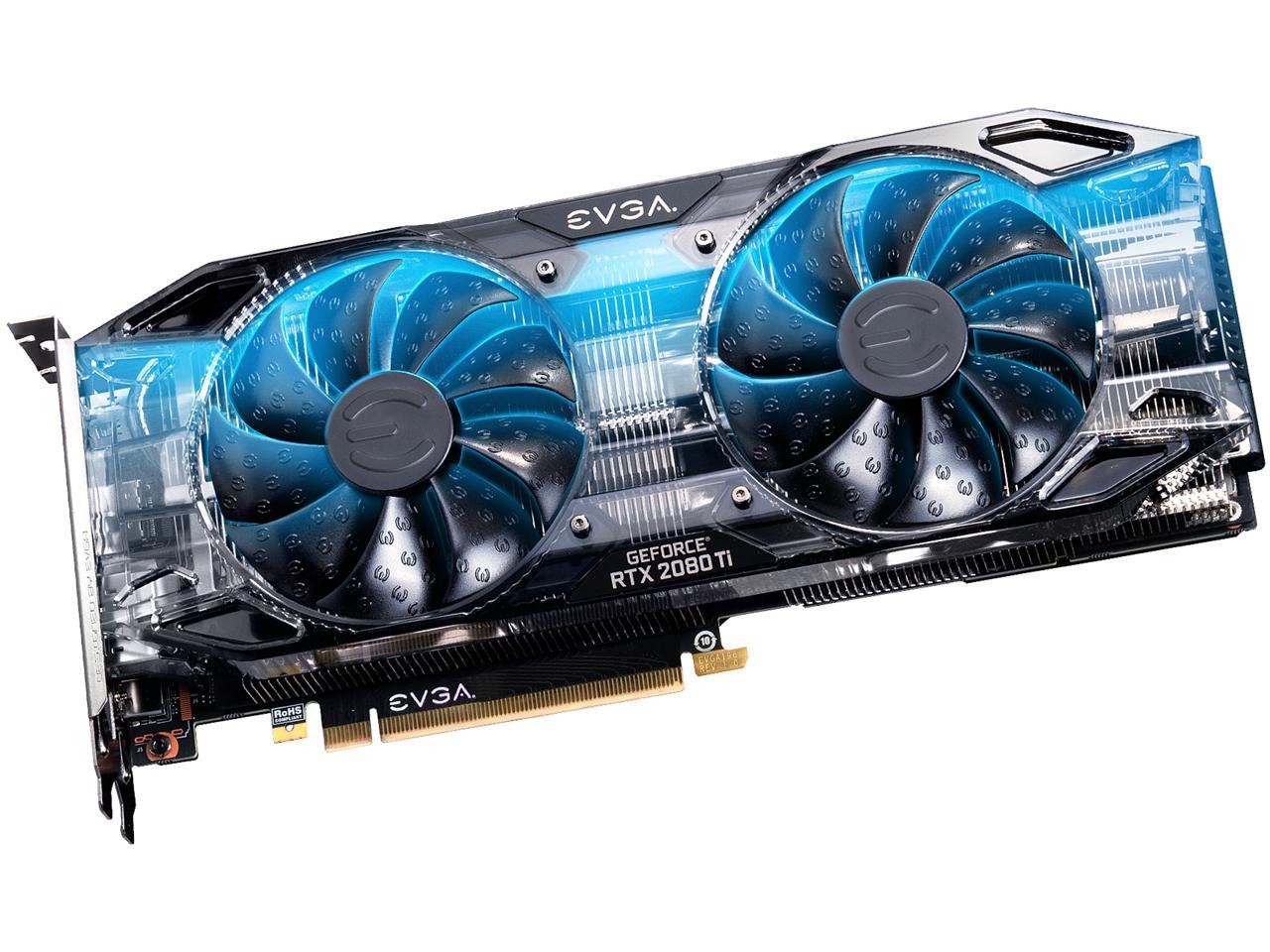 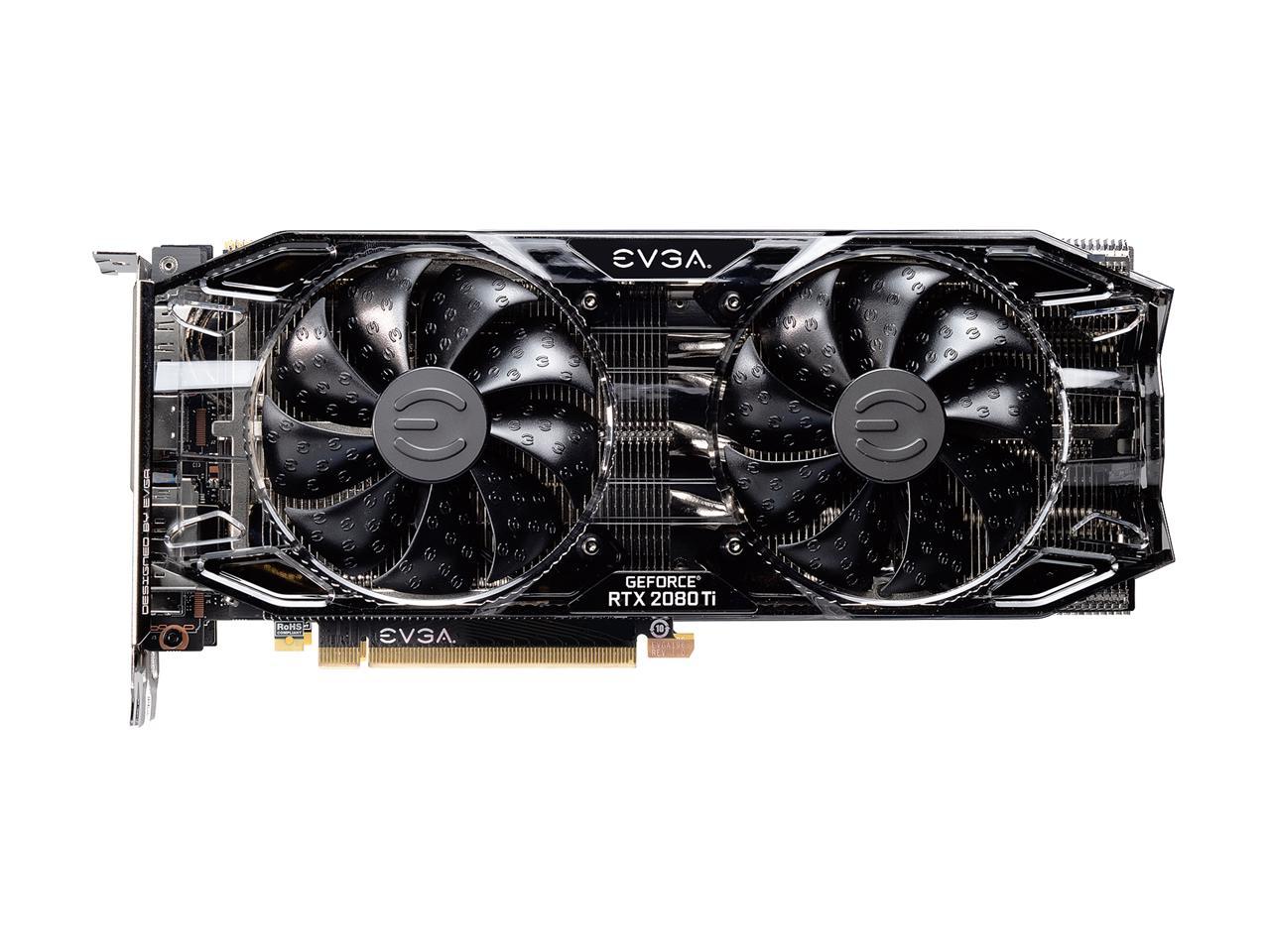 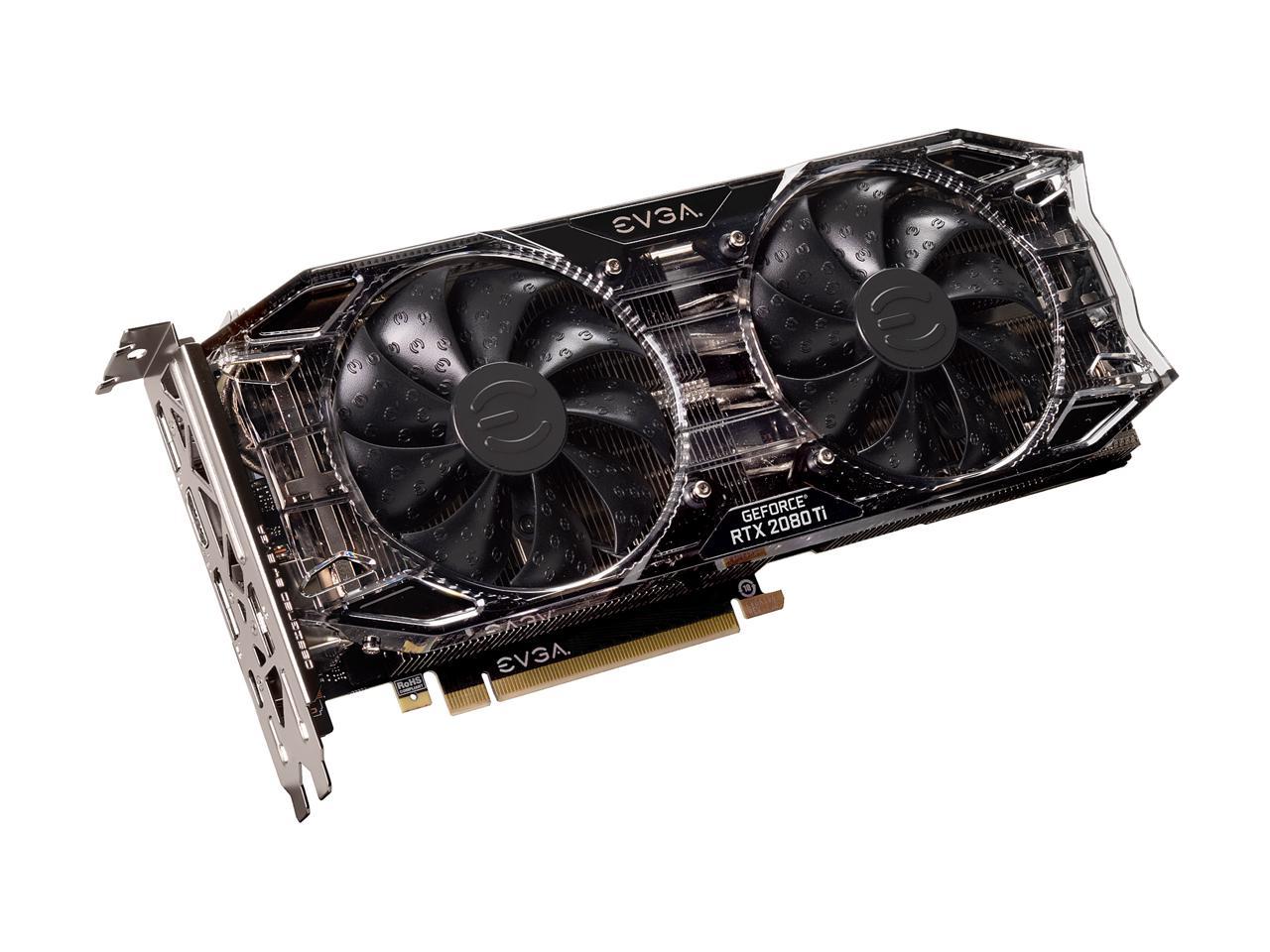 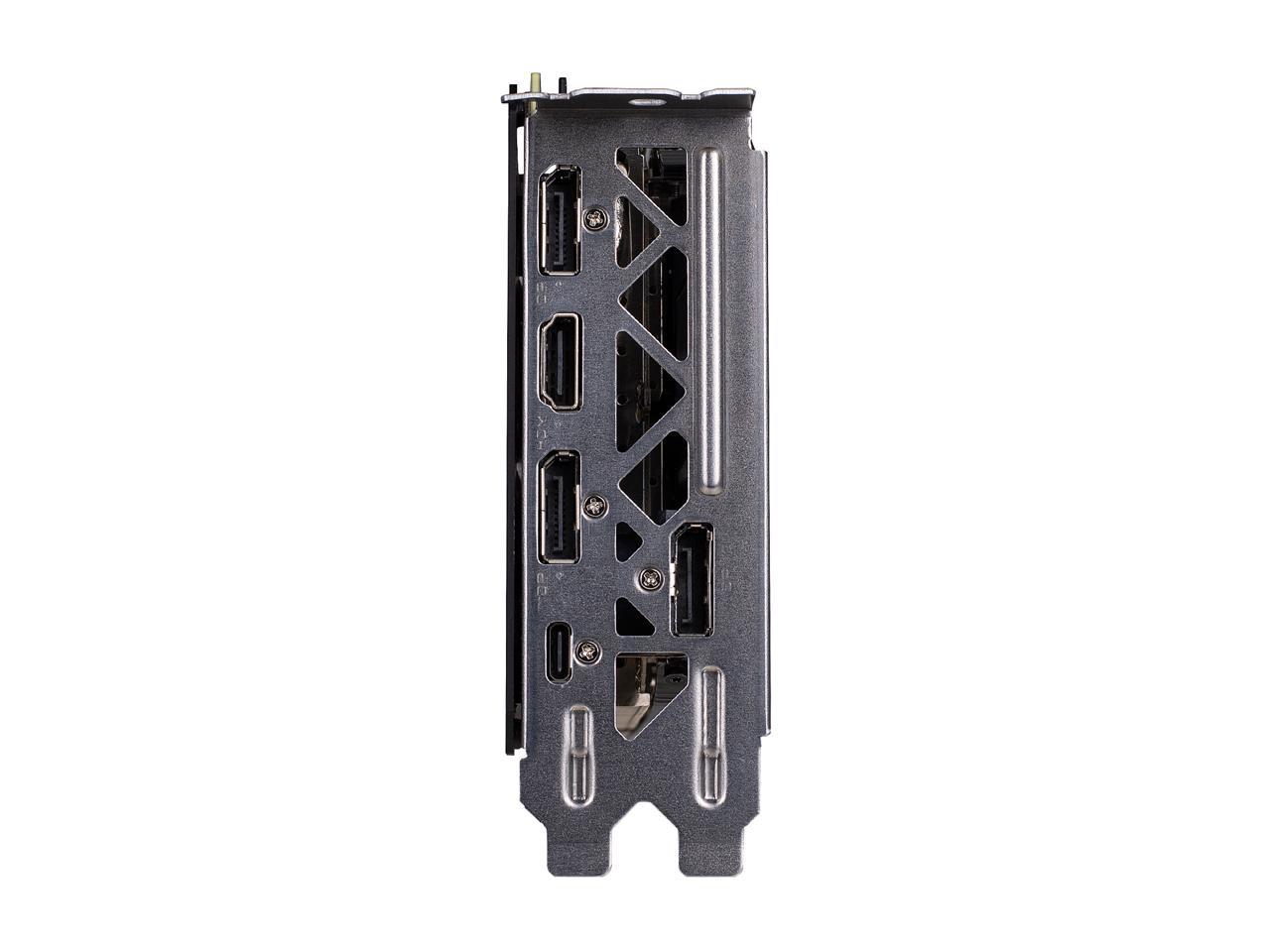 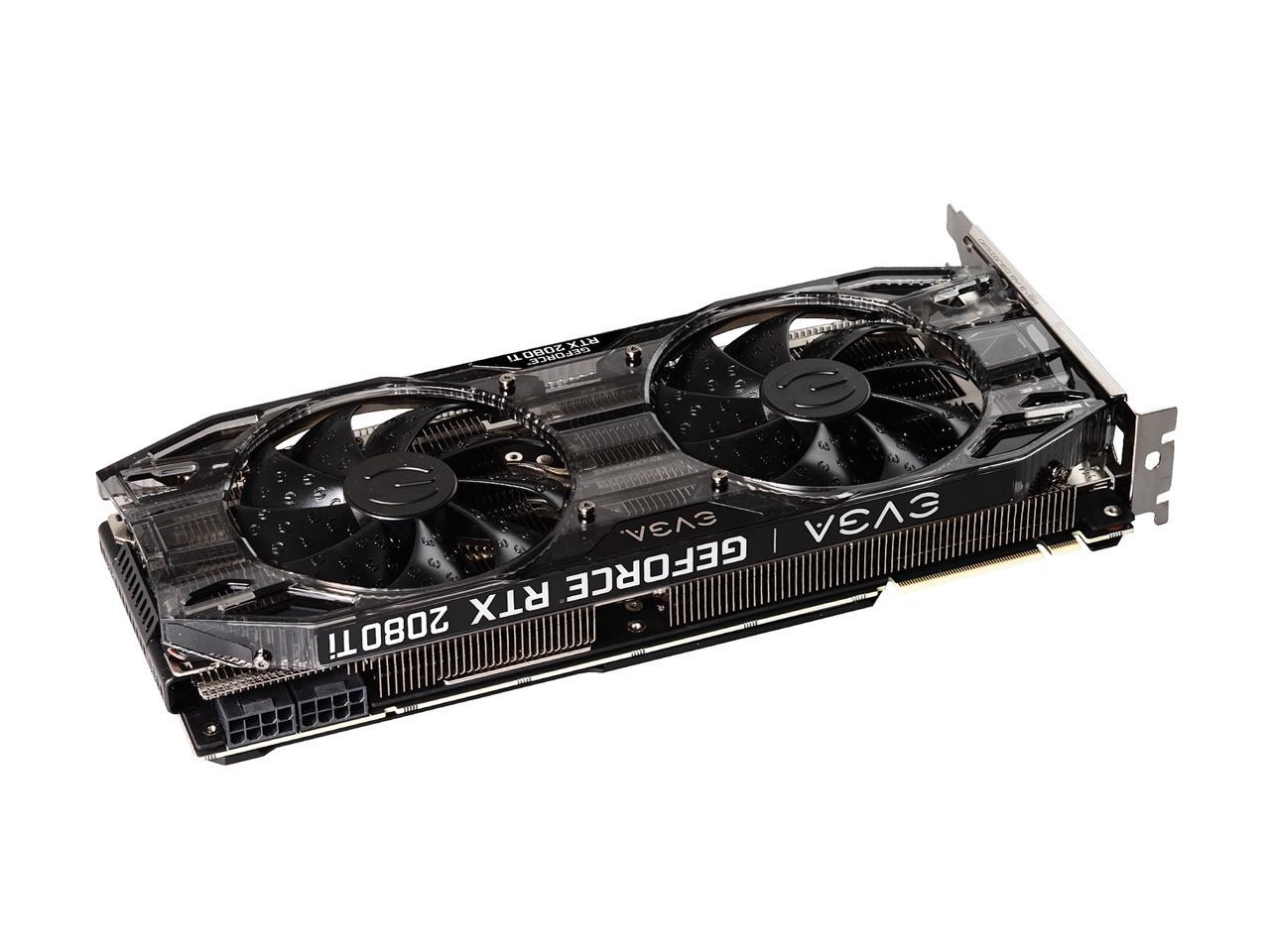 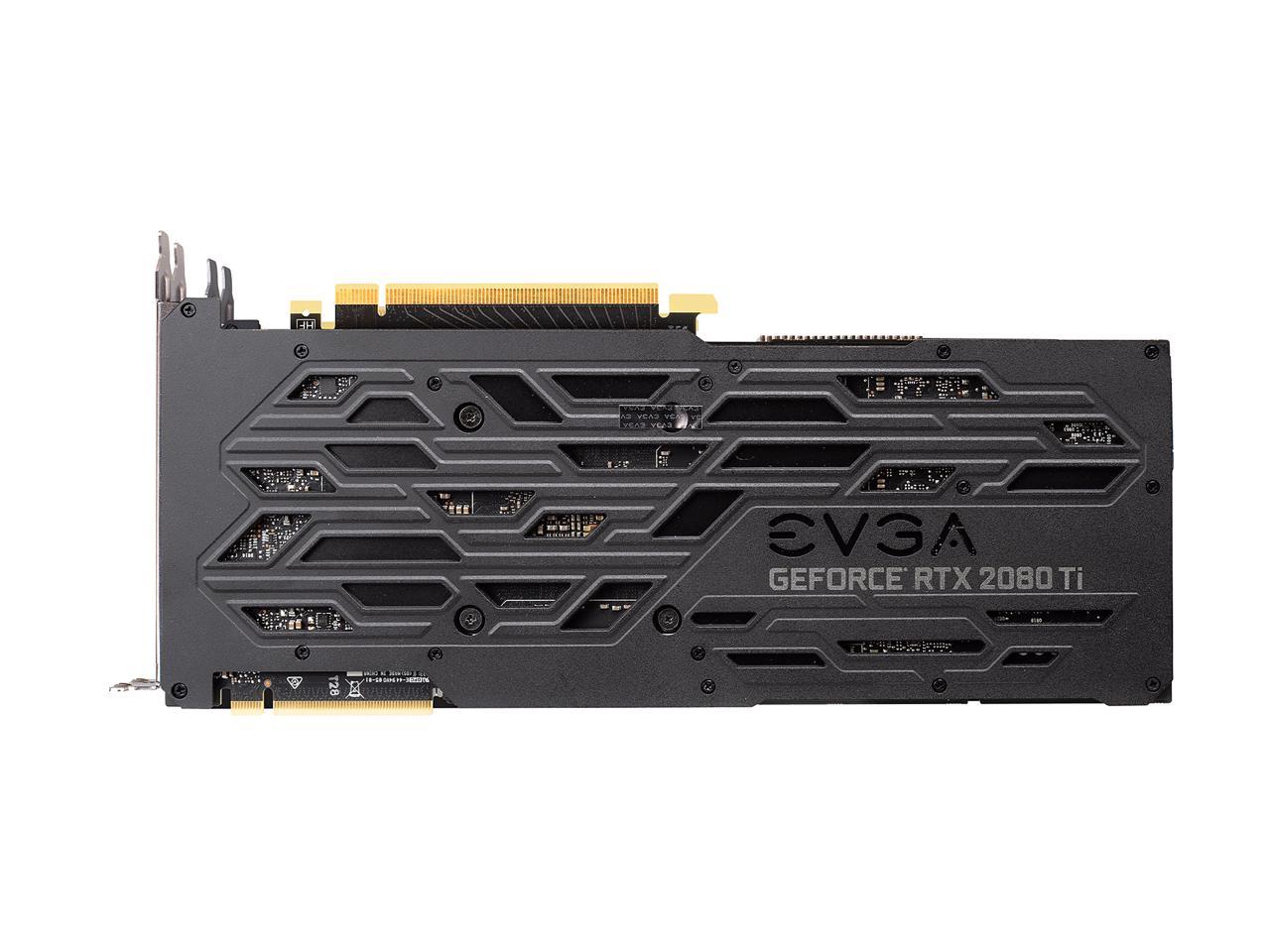 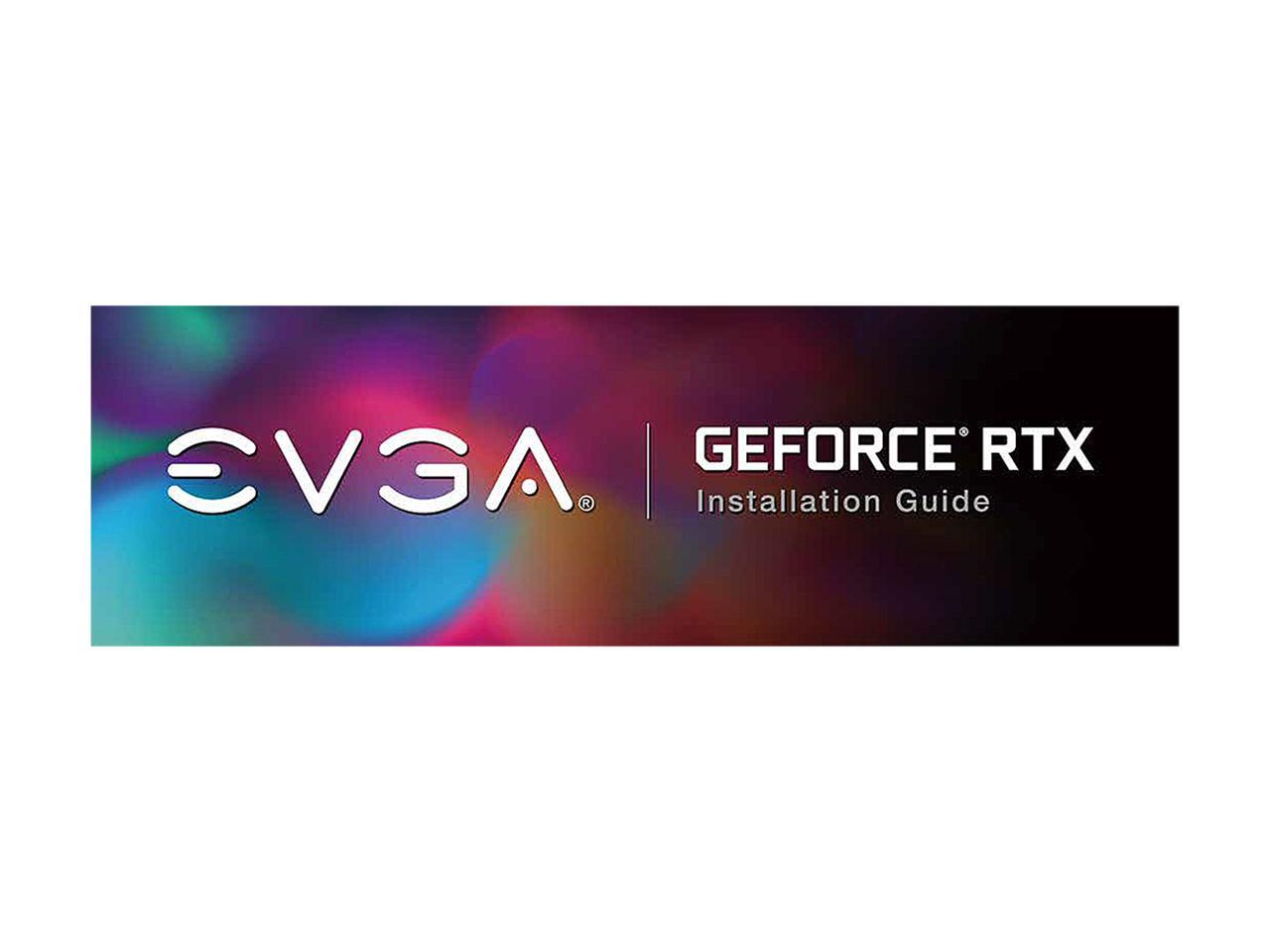 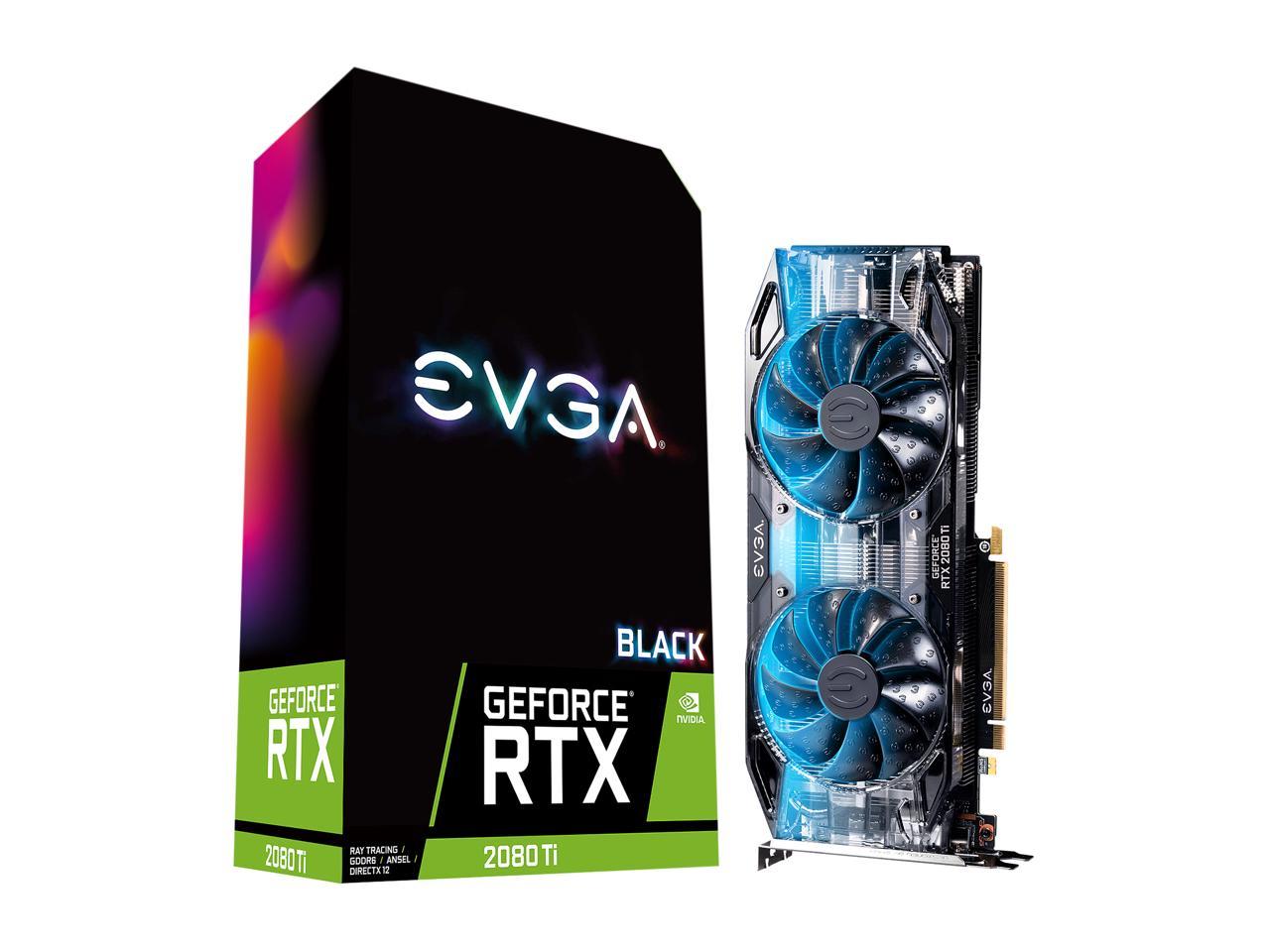 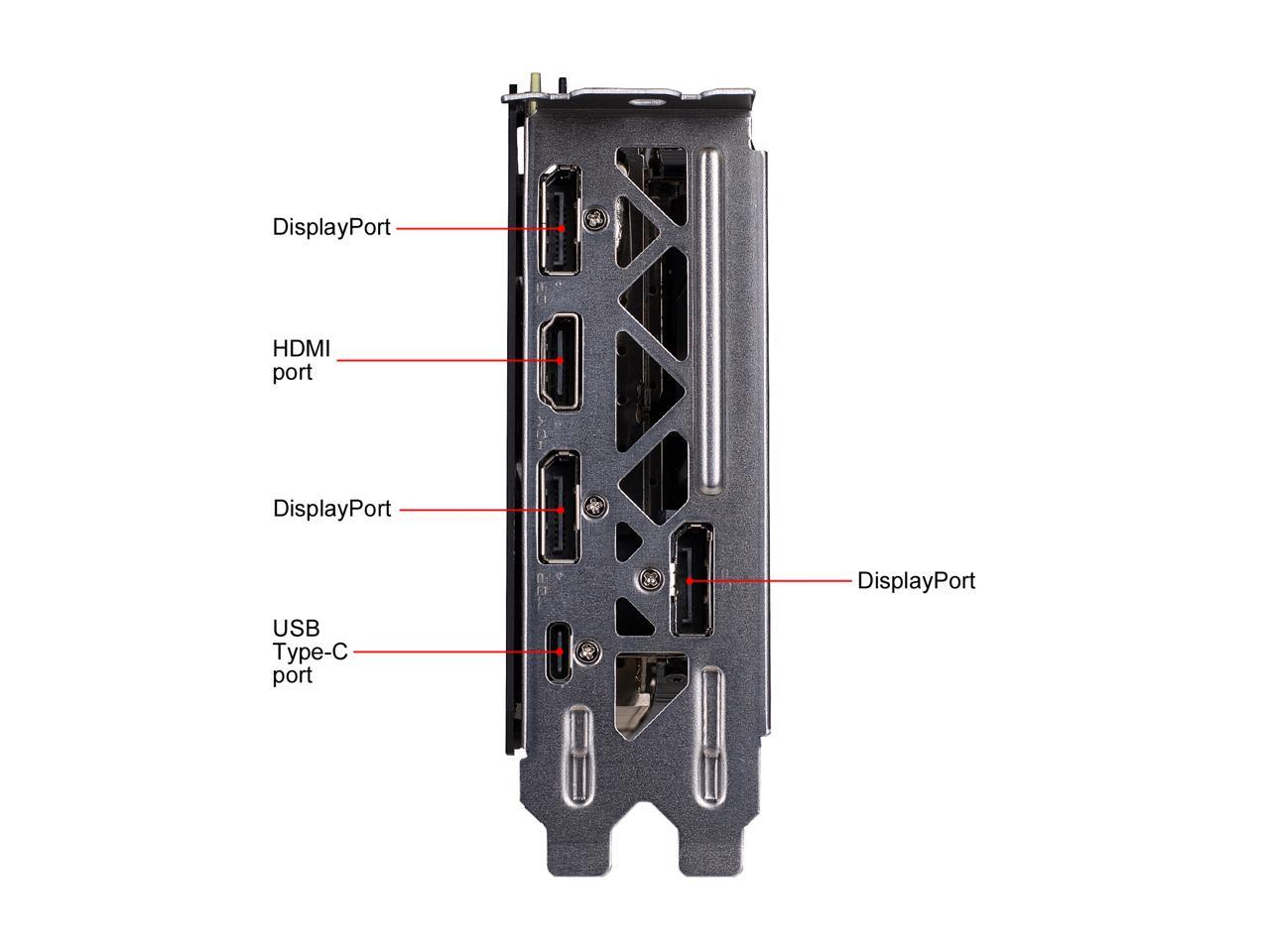 This card comes equipped with EVGA's iCX2 cooling solution to effectively and efficiently take heat away, so you can game cool and reliable even in the fiercest of competition. Pros: It beats just every other consumer grade gaming GPU out on the market right now (Not including the NVIDIA TItan or Quadro workstation cards which are not gaming class cards anyway).

Cons: Really, only the price. The TI line for this generation generation is way more expensive then previous generation TI lines such as the 1080 TI and 980 TI. I feel it may be a bit overpriced for what you get compared to the RTX 2070 and RTX 2080.

Pros: - Does 4K/60fps/Ultra on nearly every well-optimized modern game - Design is sleek

Overall Review: Upgraded to this from a GTX 1080 and I regret nothing. The 2080 Ti can run 4K/60fps/Ultra with little problem and completely destroys anything on 2K or lower. That said, if you don't have a monitor with a high display resolution and/or refresh rate, this card is massive overkill and, frankly, a waste of money. I haven't delved much into the raytracing stuff mainly because I prefer 4K with a steady frame rate over 1080p with pretty lighting. I ran a raytracing demo of a game whose name escapes me, and it looked nice, but again, the low resolution and inconsistent frame rate isn't worth it. If you're reallyinterested in raytracing I'd just wait another gen or two so the technology can catch up to the idea; raytracing is just far too demanding and too rare in modern games this early in its lifetime. But with non-raytraced games, it's a monster. The extra power doesn't come without cost, however. Although its idle temp is ~45°C, the temperature can skyrocket to 80°C under full load, even with fans on 100% speed. I didn't have this problem with my 1080. Had an issue with my first card in that one of the fans just died for seemingly no reason, but I contacted EVGA and they replaced it. I don't think it's a very common problem but I'd keep an eye on the temps if you decide to get this card. Just make sure to register your card on EVGA's website so if it *does* happen to you, you're covered. I paid extra for the EAR program to have my replacement card shipped to me before sending mine in so I had zero GPU downtime. All in all, it's an excellent card for us graphics snobs that need every last pixel and frame they can get.

Cons: Pretty spendy. Would not install in the PCI#1 slot on my Motherboard. See Below.

Pros: Ray tracing and future proofing pc for upcoming AAA titles possible VR doesn't hurt to have the best out there

Cons: Fans do make very faint on off clicks barely noticeably but set a fan curve so they just stay running not really a problem

Overall Review: Had a Evga 1080Ti and loved it the customer service at evga is the best I've ever dealt with and won't buy another GPU from anyone else.

Pros: Plays everything on super settings at high refresh rates that I play. (StarCitzen & Call of Duty: Modern Warfare) Overall best of the best if you are not really into overclocking and need to run a high resolution monitor.

Cons: Price, nvidia knows it has no competition on the higher end of things. Thanks 2019

Overall Review: I paired mine with an LG 34GK950F-B 34" and "basic" freesync on a display port @ 144 without issue. Some games don't like the higher freesync setting and it causes stuttering issues. The included "NVIDIA Gift - Call of Duty: Modern Warfare" ran flawlessly and let me tell you, the HDR RTS is just pure gorgeousness at super settings. Just make sure you also put in a good SSD like a "Samsung 970 EVO m.2" or better to help on load times. Just make sure you have the proper generation slot to get the 3,500MB/s read speeds. Overall, I wish the price was better but you get what you pay for. Just remember, the other parts of your build have to play well with this thing or your going to waste your cash.

Pros: This card has run the gambit of every game I own and has finished a champion. Running 1440p @144fps feels effortless.

Cons: The card will run warm when taxed so be sure to have good airflow in your case so the card can breathe. My card would idle around 55°C and run between 80-85°C under load before more adequate case fans. With good airflow you can expect low to mid 70's under load.

Overall Review: If you're looking for an RTX card but cant use a triple slot card like me( due to mini itx build ) then I gladly recommend this card to anyone.

Cons: Price to performance is horrible but horsepower is always expensive. As soon as I buy the "fastest gaming gpu available" I start see rumors of a 2080ti SUPER. lol

Overall Review: Currently I keep the GPU around 1900MHz and it is whisper quite with temps below 78c. Would definitely recommend this card.

Pros: Runs cool on load (mid-high 60s). Great for 1440p and 4K. No more worries about running future triple A titles. Quality build. Easy to install. No issues so far

Cons: Requires two 8-pin PCIe connectors. So if the electricity bill is a concern, then this isn’t the right card. It’s very heavy, I recommend buying a GPU bracket or brace to support its weight.

Overall Review: I bought this card as an upgrade from a GTX 980Ti. It’s a big jump in performance, but the 980Ti is still a really really beastly GPU even in 2019. For its performance I can’t justify the price for someone gaming on 1080p 60hz. There’s better alternatives. But if you see yourself buying a higher resolution monitor in the near future, say 1440p and above, this is the card that will secure stable frames in any title with the highest graphical fidelity. The card does not run hot for me as stated by others who bought this aftermarket version. I hover 55C on light gaming and max out at 69C on load with default fan curves. It may be because I have pretty decent airflow within my case which is a Corsair Obsidian 750D Airflow Edition. I’ve got plenty of room inside and I have tons of fans. I do see people reaching mid 70s, but closer inspection in their builds does reflect their thermals due to less adequate airflow and size of the case. You can always undervolt the card to get a slightly less voltage if thermals in your set up are an issue. Overclocking can make this card run 76C and above. Mine peaked at 82C before thermal throttling. That’s with default fan curves. With an aggressive fan curve, I do not get temperatures above 78C. I don’t go heavy on the overlocking also. Buy this card, if you have the money and want the fastest consumer centered GPU. More support for RTX is in the future, and as more titles adapt it, this card will play them well. It will last you for many years to come.