OUT OF STOCK
Sold by: Newegg
Shipped by Newegg
This item is currently out of stock and it may or may not be restocked.
Out of Stock
Add To Wish ListFound on 365 wish lists 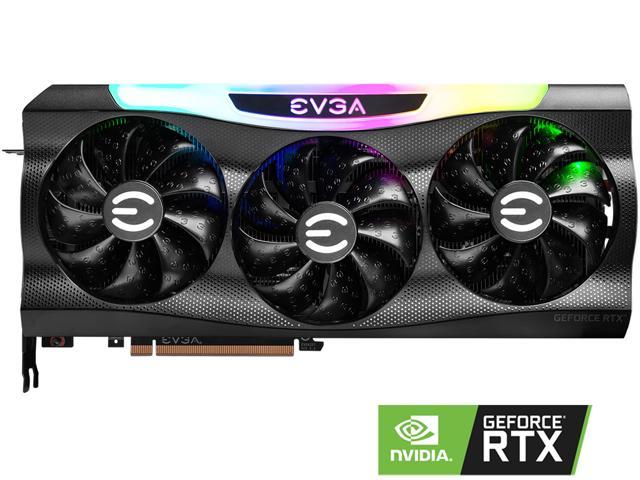 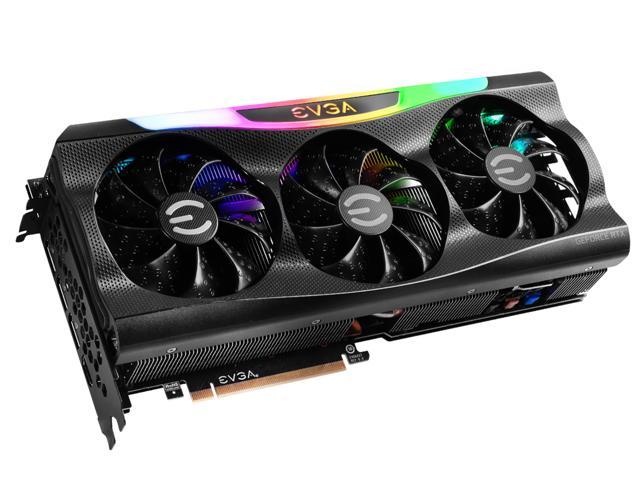 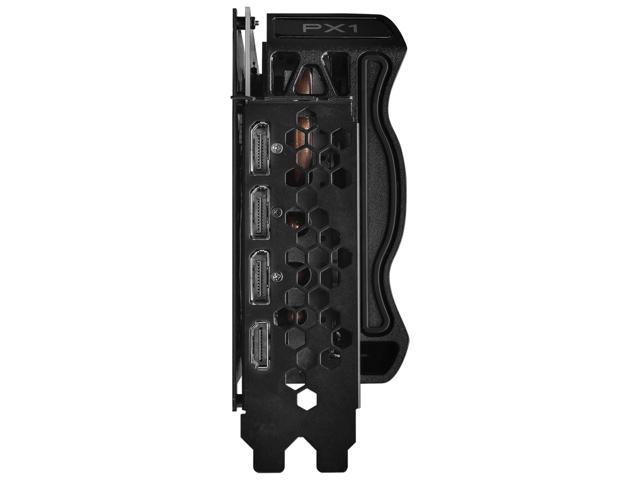 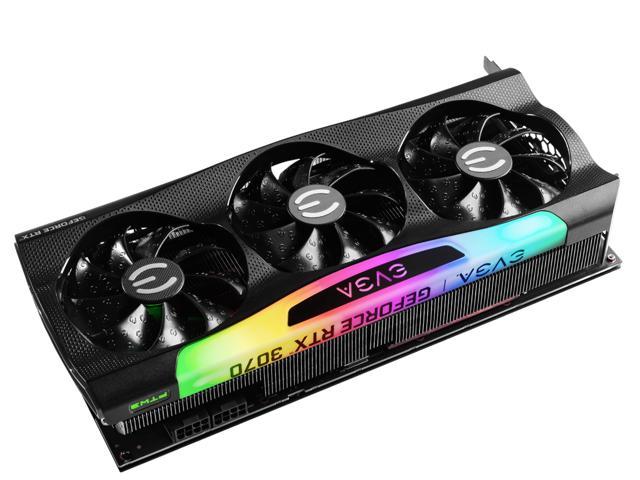 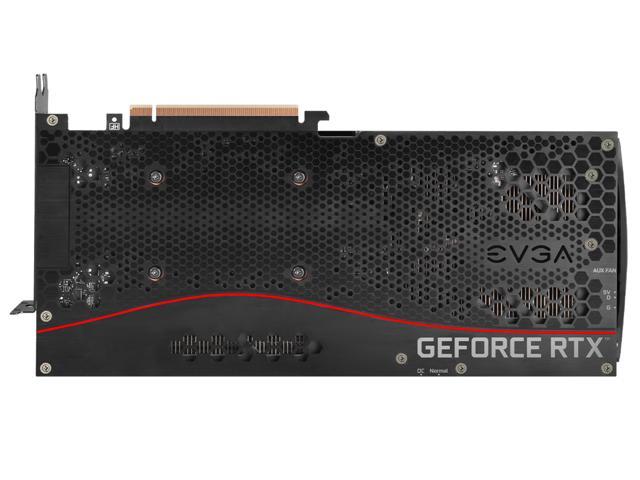 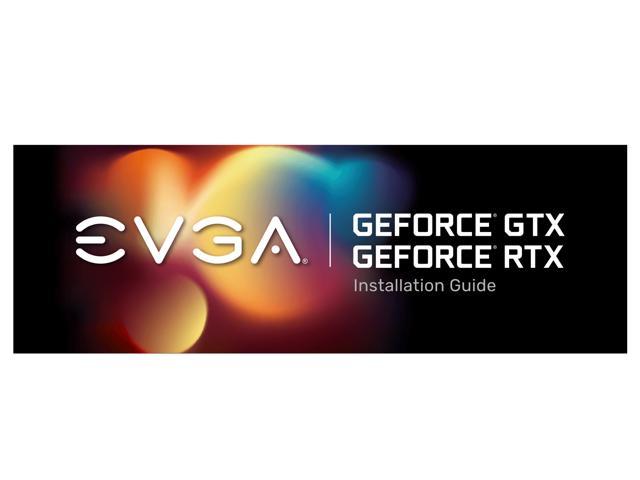 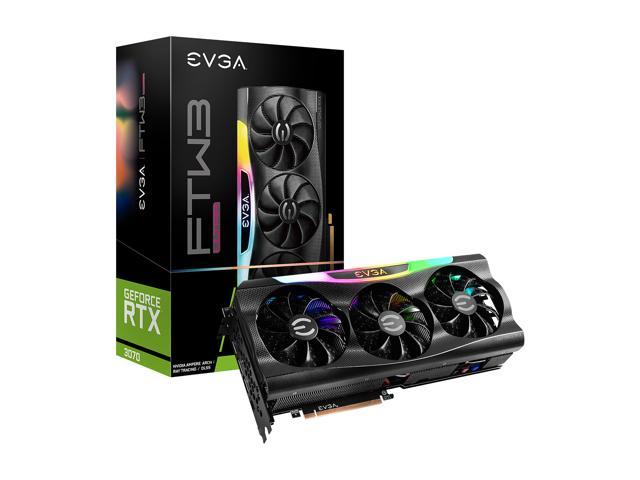 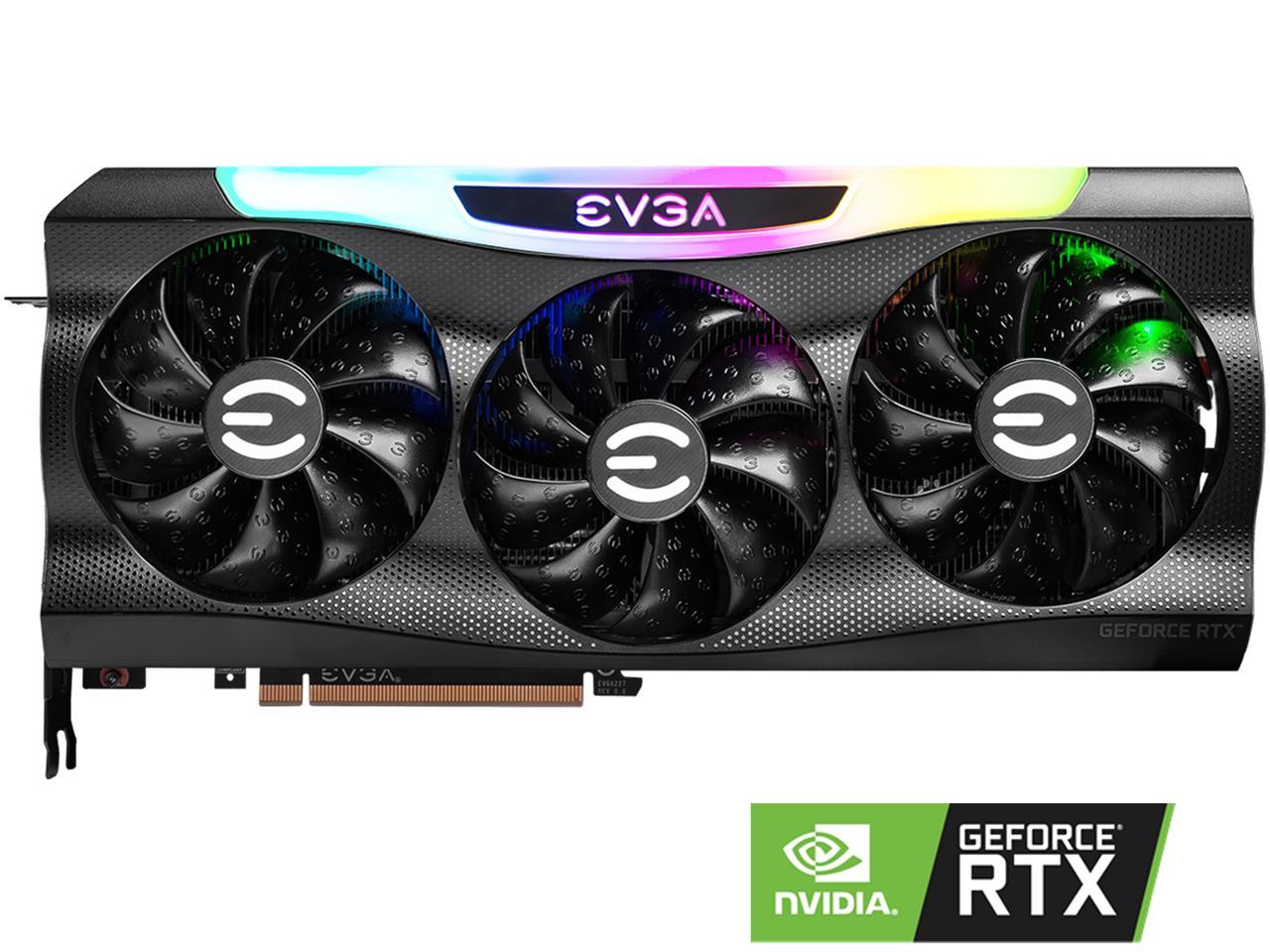 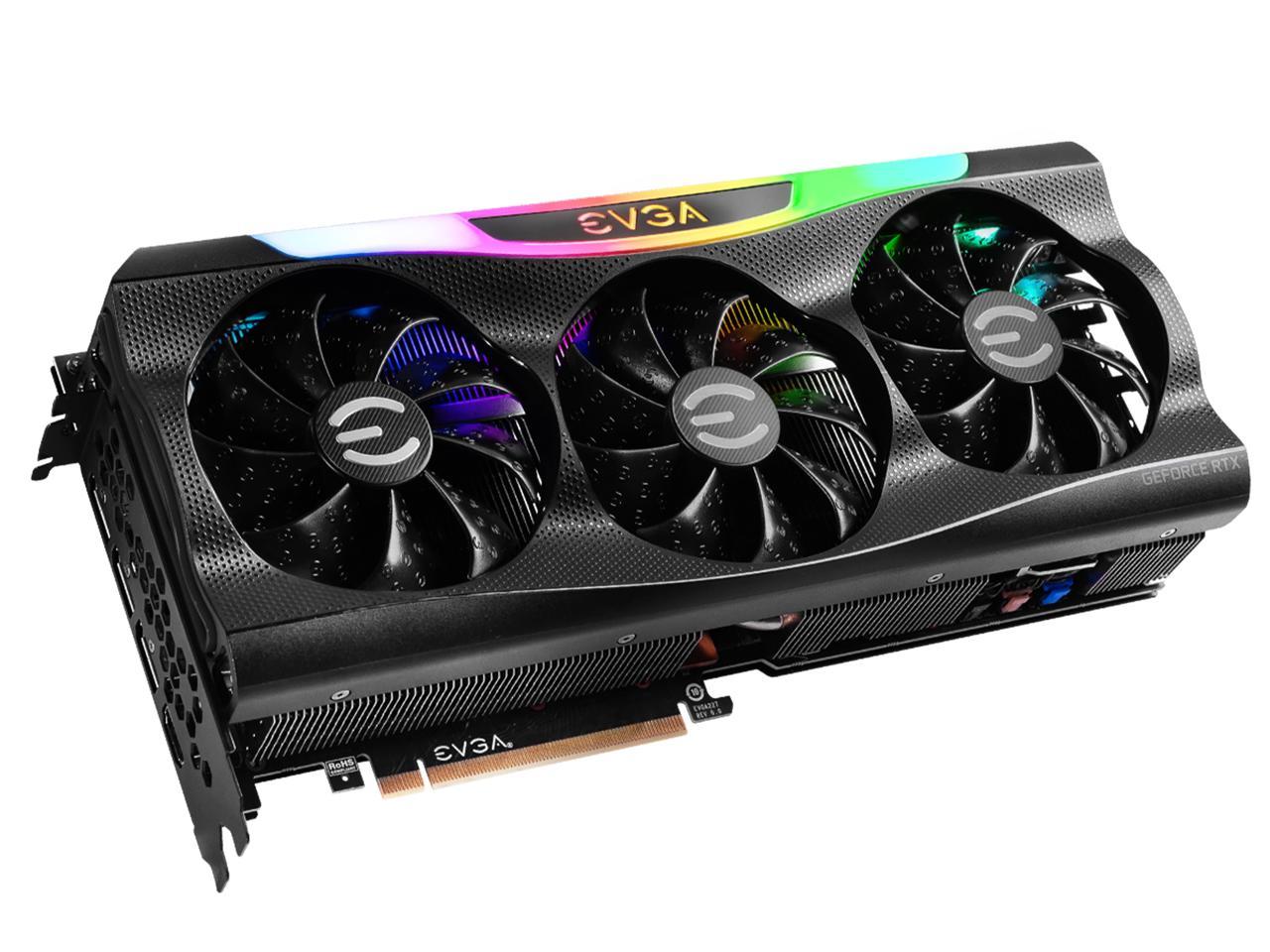 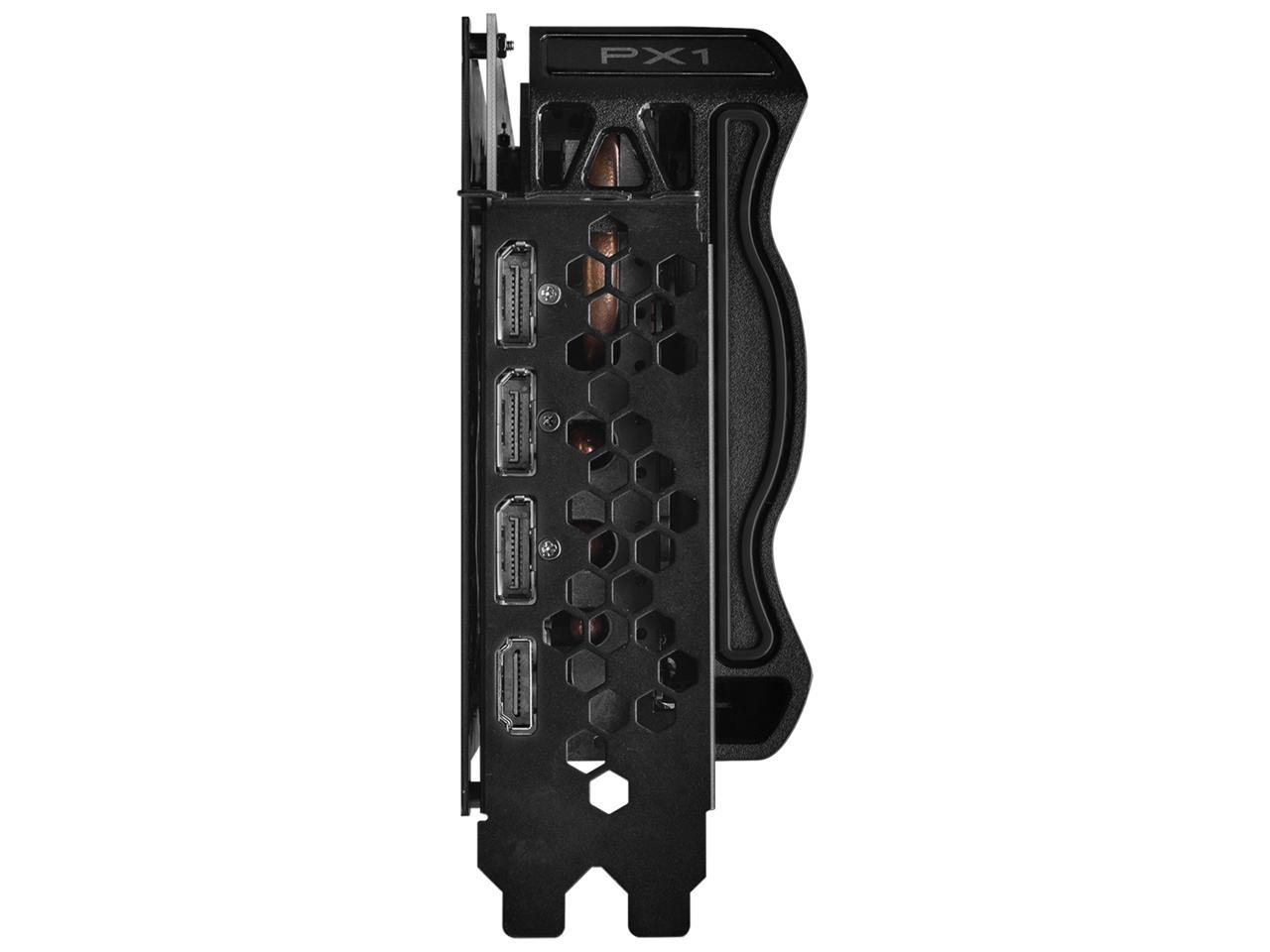 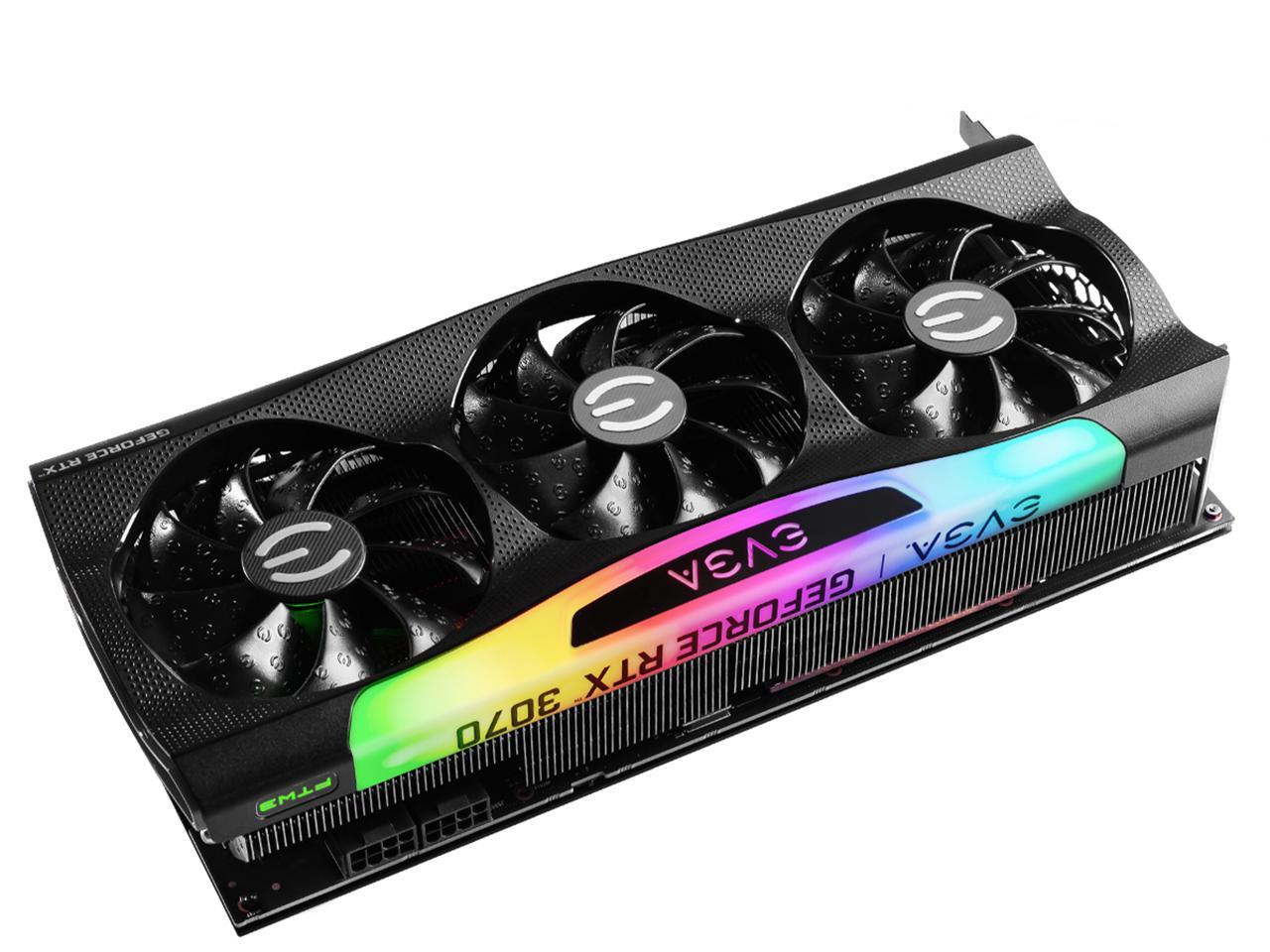 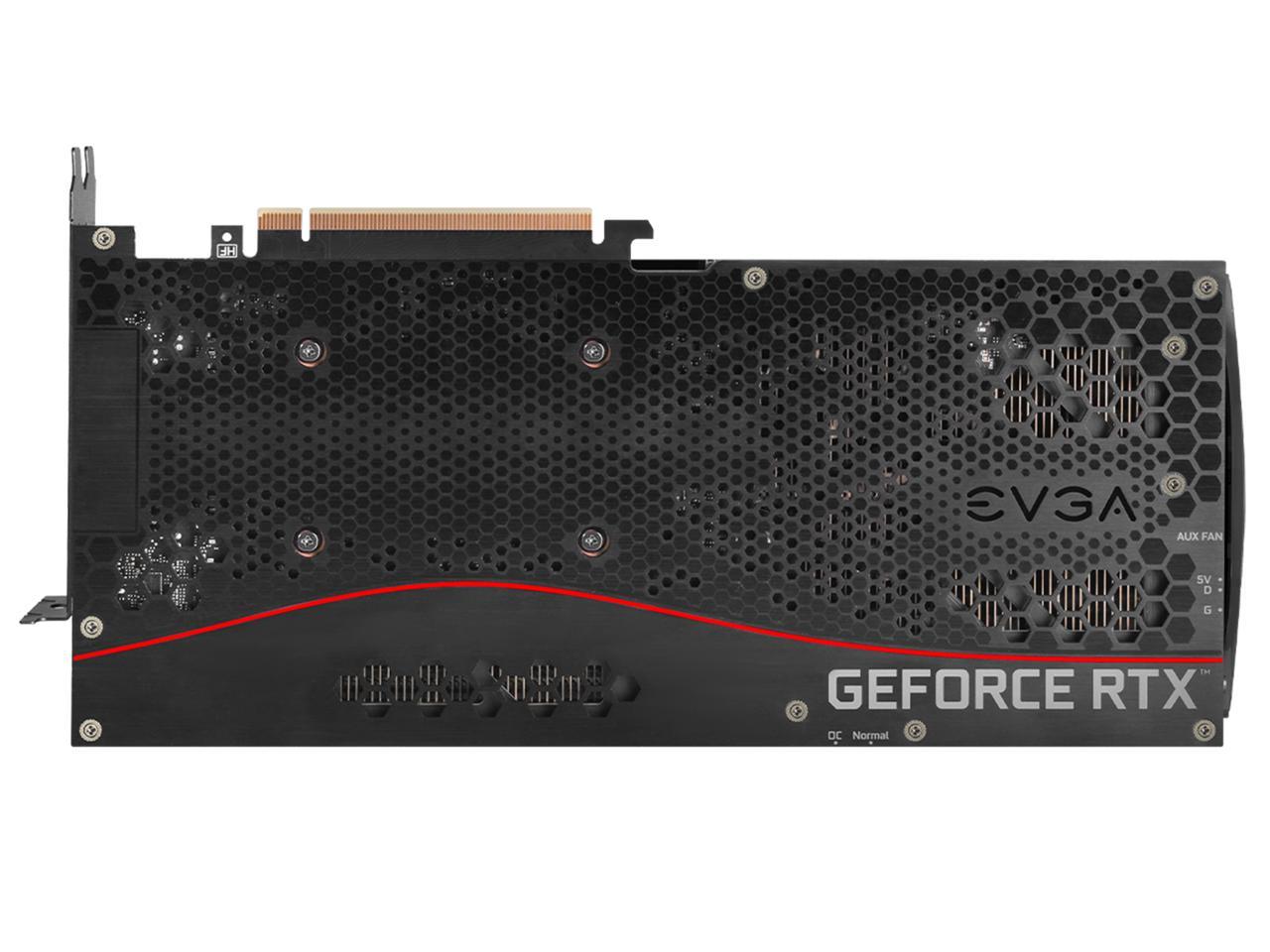 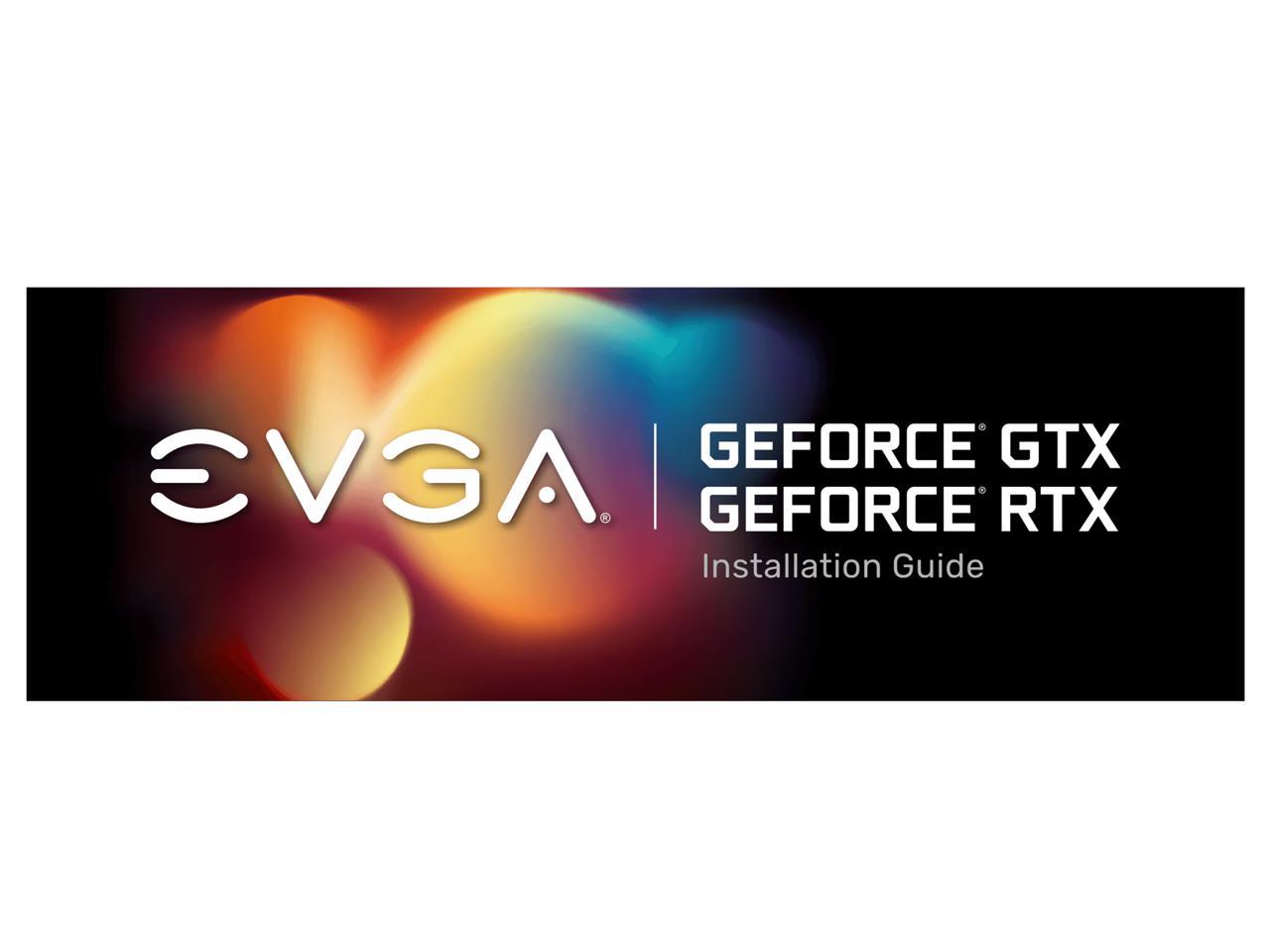 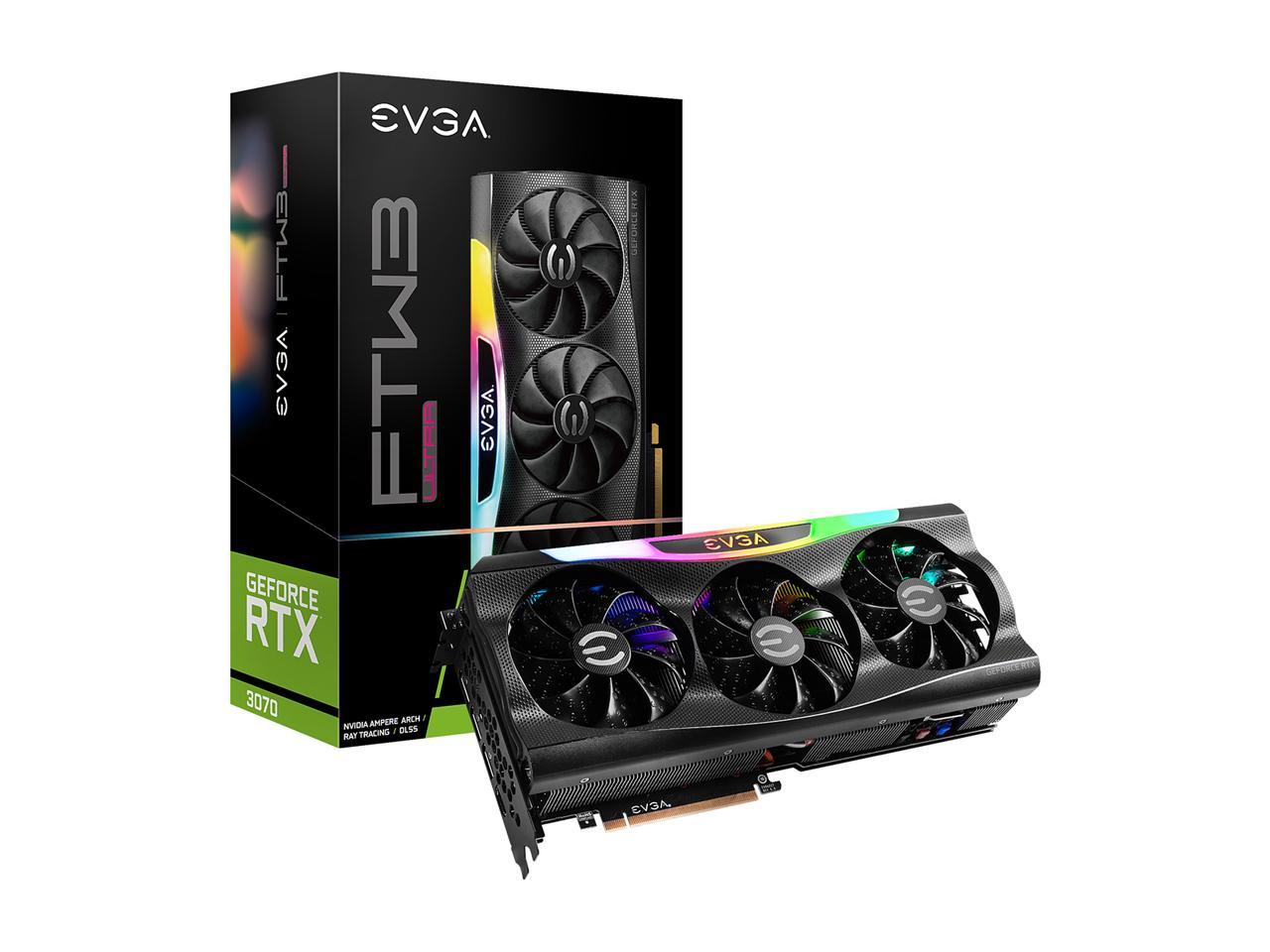 An undeniable force is here. The planets align as the next evolution of the ultimate gaming experience has emerged.

These new cards are colossally powerful in every way, giving you a whole new tier of performance. They are powered by the NVIDIA Ampere architecture, which doubles down on ray tracing and AI performance with enhanced RT Cores, Tensor Cores, and new streaming multiprocessors.

The EVGA GeForce RTX 30 Series is the absolute definition of ultimate performance.

The EVGA GeForce RTXTM 3070 is powered by the NVIDIA Ampere architecture. Built with enhanced RT Cores and Tensor Cores, new streaming multiprocessors, and high-speed G6 memory, it gives you the power you need to rip through the most demanding games at 1440p resolution. Combined with the next generation of design, cooling, and overclocking with EVGA Precision X1, the EVGA GeForce RTX 3070 Series creates a definition for ultimate performance.

Patented copper base is 25% larger to cover both GPU and RAM area to improve thermal transfer and GPU/RAM cooling.

FTW3 center fans are offset by 10mm to increase the direct airflow area by 16%.

iCX3 Technology uses asynchronous fans to cool graphics card components only as needed. These fans spin at different rates, ensuring that the correct areas of the card are cooled and reducing noise in the process.

Overall Review: I got this on Newegg shuffle and am very grateful. It helped to complete my new build. I was trying to get a 3080 but we all know how that is going. I am hoping to upgrade sometime in the future. This is still a very big upgrade from my old EVGA 1080 FTW and for the first time I felt like I needed a GPU brace to help prevent sagging. I think the shuffle is a great idea to try to keep bots and scalpers at bay. They are the bane of our present day electronics reality. Thank you Newegg.

Pros: it lights up

Cons: its lot of money

Overall Review: Overall this is a great video card. I upgraded from a EVGA 2080 XC Ultra to this and I am noticing around %20-30 gains depending on game and benchmark. Card runs cool which is always great. Don't expect this video card to be completely silent but it is still very quiet under loads. It is built to be overclocked and its default fan profiles are in line with this. This is seriously a great video card for 1440p gaming. Depending on settings I can range from 140-250fps in all the games I play and I even surpass 500fps in CSGO at times in max settings. If you want an excellent 1080p/1440p video card capable of driving high frame rates then this is an excellent choice.

Pros: This thing is a big boy. Runs games great. The rgb software works smoothly. No regrets. Mine auto boosted to 1970mhz out of the box.

Pros: 1. One of the very few video card manufacturers using a metal back plate to keep your video card cool, and extra protection. 2. EVGA offers a overclocking app called Precision X1. 3. EVGA products are very well built, quality at it's best, easy to see even from just pictures and ads. 4. Very fast and high FPS in games, FTW series is a class to itself. 5. RGB lighting for case modders looking to match the lights in their case. 6. 3 fans for solid cooling without having to add extra case fans for normal use. 7. Water blocks are available for this card, if you are a liquid cooling fan. Plus: I have 25 years of computer support with building gaming computers, and EVGA is a top name brand for quality, price, performance, and style. HIGHLY RECOMMEND

Cons: None Only wish they would include more swag in the boxes. We like stickers : )

Overall Review: Try EVGA if you never have, you will become a fan too. EVGA fan boy for a reason.

Pros: Lives up to expectations.

Cons: One of the fans was making a horrible noise due to a little bit of wiring making contact. Easy fix to push it out of the way. For the price of the card you'd think wires would have sufficient clearance and this would never happen.

Overall Review: Recommended and worth the small increase in cost.

Pros: I’m very happy to have finally be able to update my pc. Newegg shuffle helped me secure it in a combo with an EVGA PSU (haters can hate, I’m happy they switched to this format) The card was easy to install and is visually terrific. I have not needed any additional support from EVGA but their reputation is legendary. Extremely satisfied

Cons: The process for acquiring these parts was terrible. It took 4 months of battling bots to finally get a GPU. Newegg needs to do a better job of blocking bots. Period

Overall Review: Highly recommend this to anyone looking for an update on their PC.

Pros: When I got the RTX 3070 I decided to stick it in an older system that has an i5-6600k with 16gb of RAM, 1080p 144hz monitor. Man.... did the 6600k ever BOTTLENECK. I tried playing FFXV and not only was the CPU usage pegged at or near 100% constantly, but the framerates would drop about every 30 seconds. After seeing a few other games suffer with the 6600k, I put the 3070 in another system with an i7-8086k @ 5.2ghz -2 AVX. Most of the time the GPU usage was around 60% to 70%. Intel's illustrious Quad-Core era is truly DEAD. EVGA card with the famous EVGA warranty. I've had to file a few RMA's with multiple companies over the years and EVGA is probably the best company to deal with. Lays waste to 1080p gaming. There's not really a better card for the job. The cooler is probably overkill for the GPU..... but that's the way I like it. When I buy Graphics cards I tend to keep them around for a very long time and I'll pass them off to other family members. Nvidia drivers are always stable for the most part. I don't mind AMD cards, but if I put an AMD card in my brother's computer then the drivers will eventually mess up and I have to go over to his place and fix the drivers. We don't live in the same city so having to do this is a PITA.

Cons: The one thing I don't like about the RTX 3070 in general is the GTX/RTX XX70 series is usually within a good range of value for the dollar, but the RTX 3070 isn't. Oddly, This time around the RTX 3060ti is the better value. The RTX 3070 is kinda like the old GTX 580, 680, and 980 where paying the extra money for it didn't make sense from a value perspective. In a perfect world, or the old world that lacked miners and stock was abundant, I would tell anyone to either pay more for the RTX 3080 or get the RTX 3060ti. Right now it's every man for himself and get whatever you can get. I really don't think 8gb of VRAM is enough for the long term. Just look at the 3gb GTX 1060 if you want an example because that card was obsolete 2 years ago. In many ways the RX 6800 might be the better card, but at least the RTX 3070 is better with Ray Tracing and DLSS.

Overall Review: The cooler is overkill and I'm backed by the EVGA warranty so I give the product itself a 5 star rating. The RTX 3070 by itself I give a 3.5 out of 5 star for the lack of VRAM and being a poor value in comparison to the 3060ti. I'll betcha that by the end of the Ampere run in 2022, the early adopters will be laughed because 8gb of VRAM will only be enough for 1080p and there will be a Super series that has 16gb of VRAM in the 3070. The people who say 8gb or 10gb is enough will be eating their words.....Nom, Nom, Nom