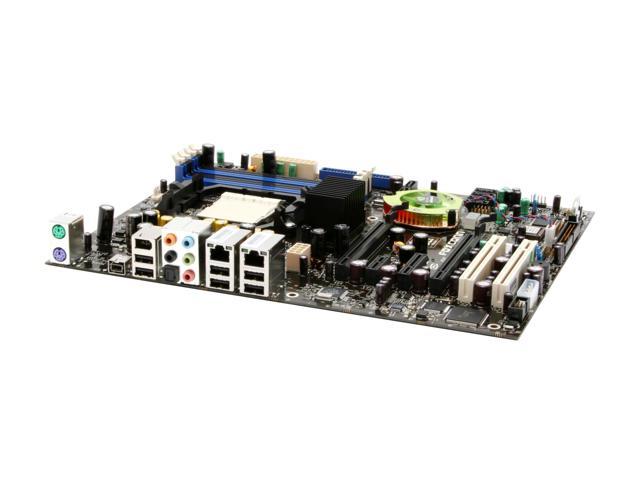 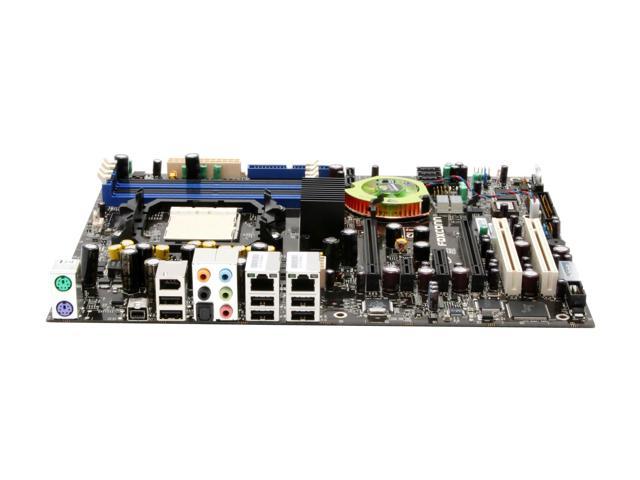 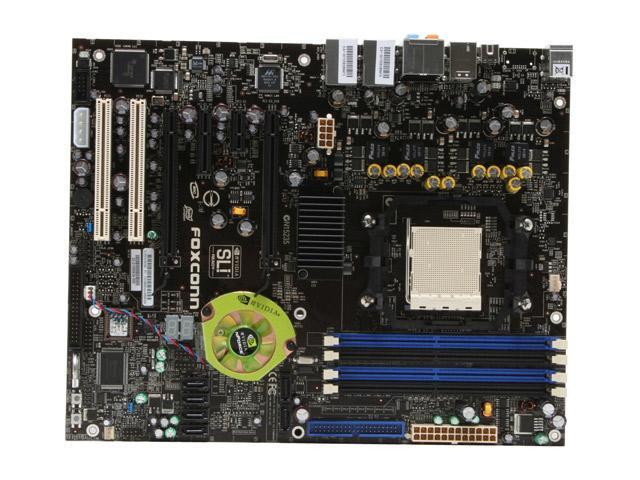 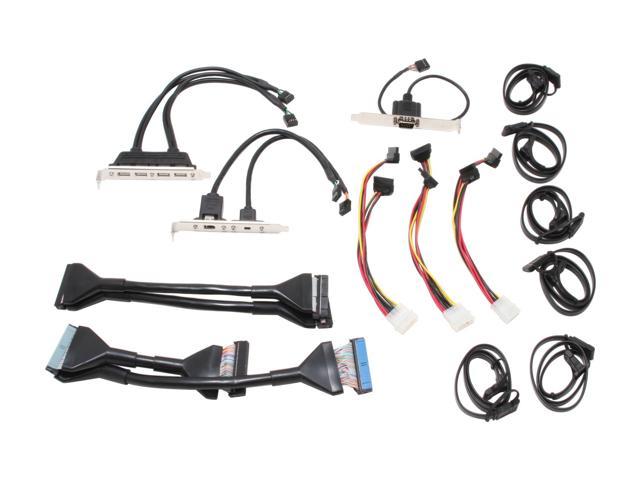 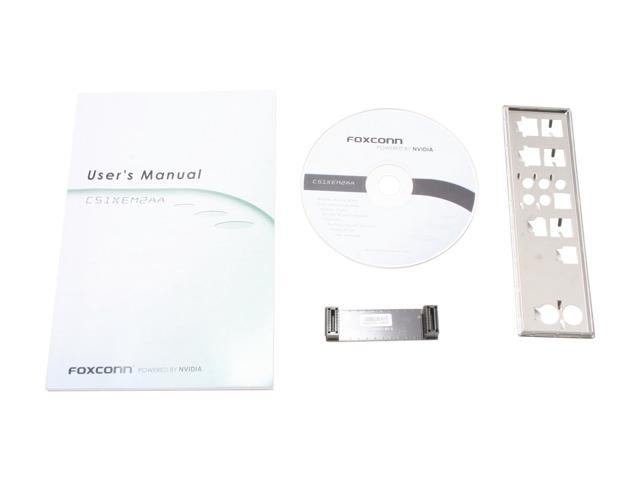 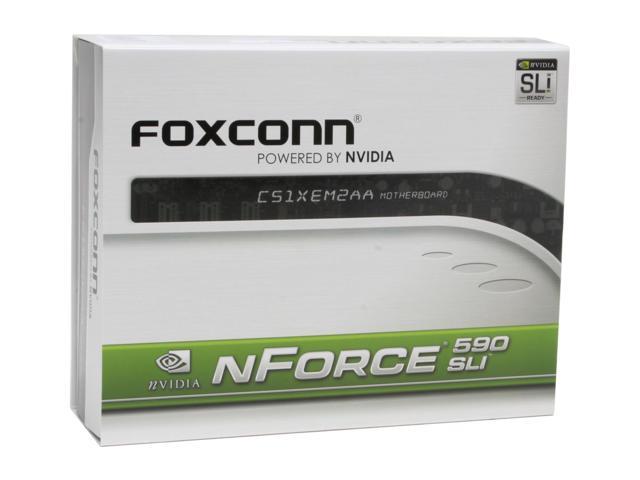 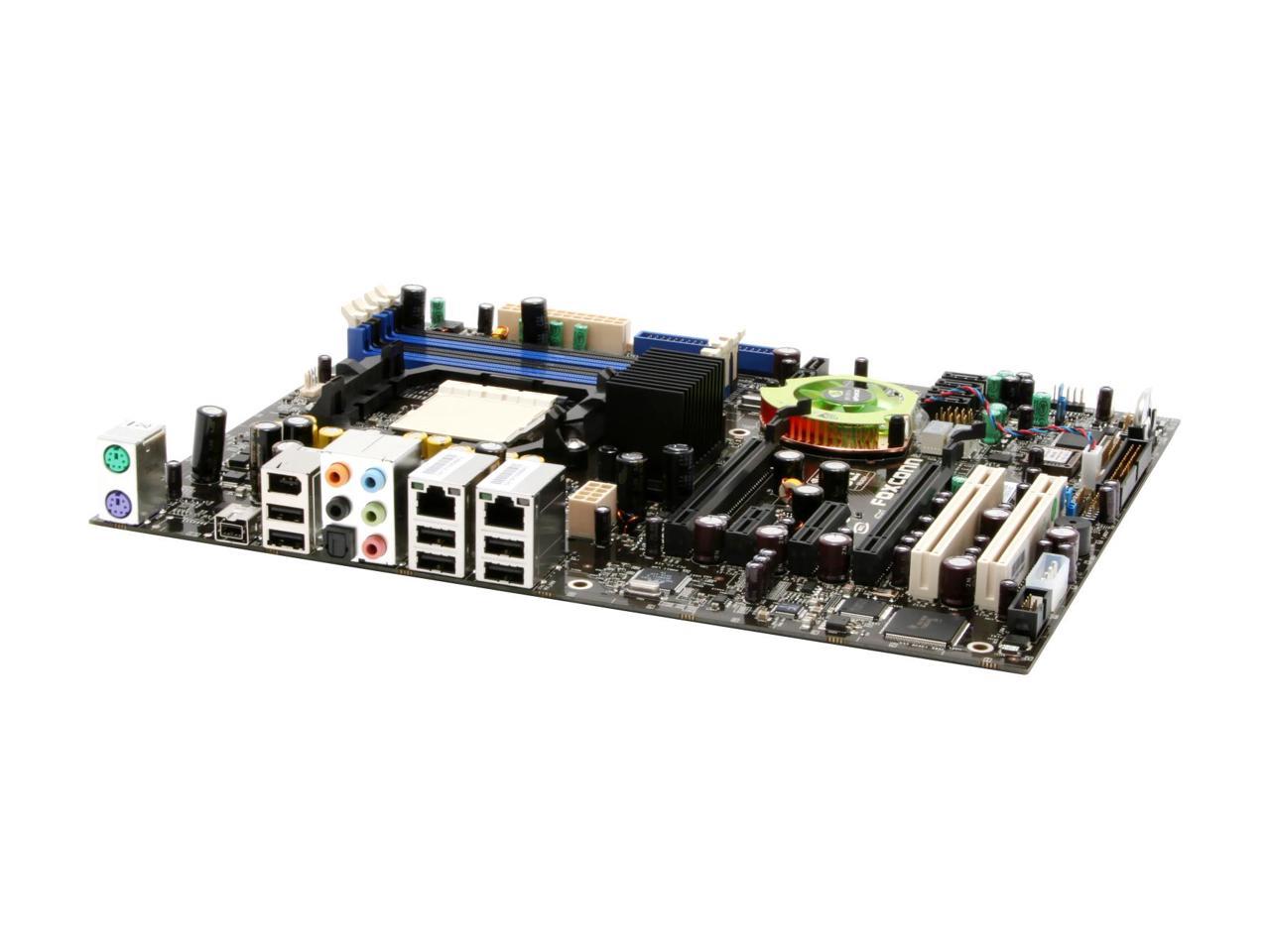 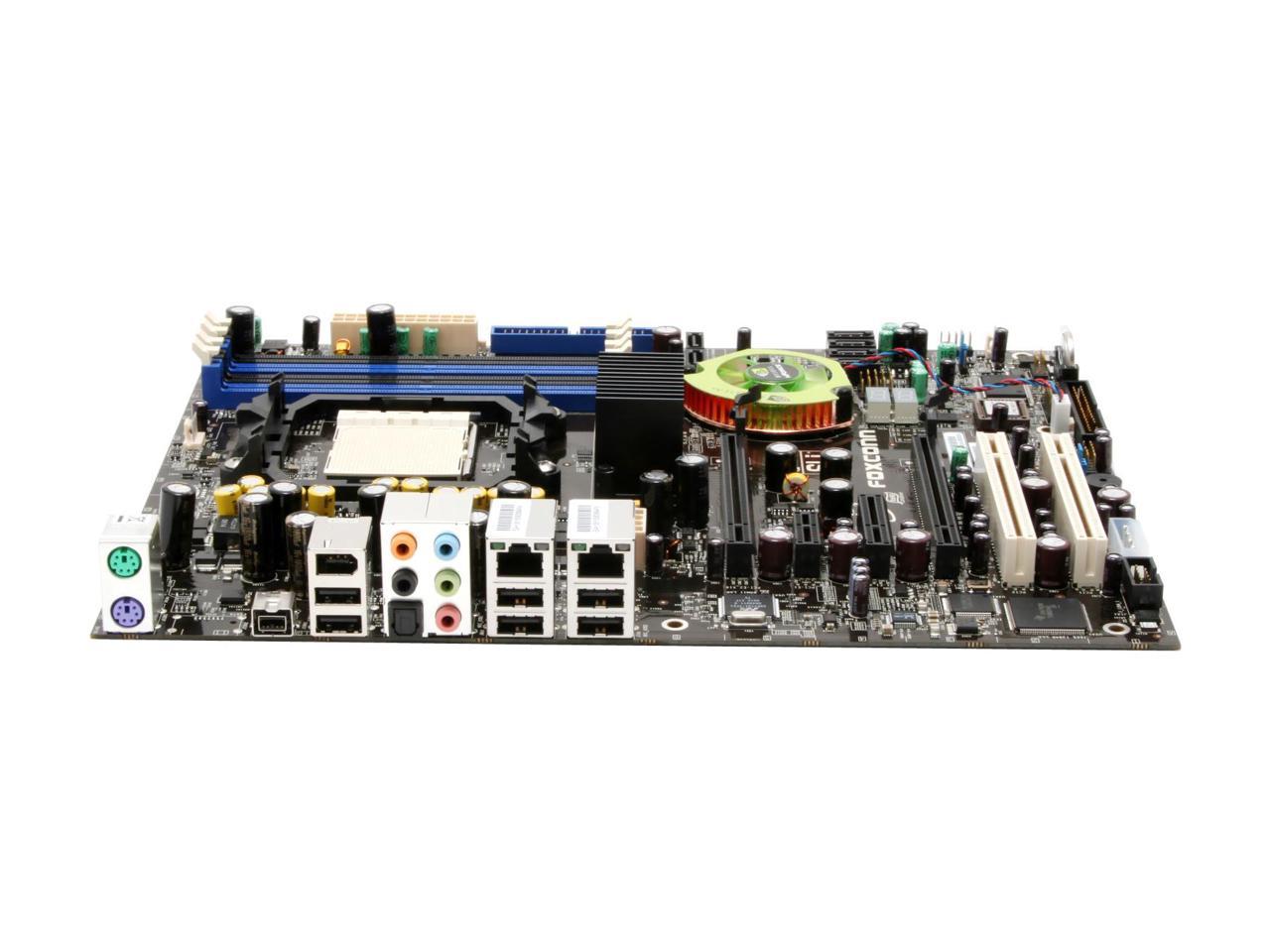 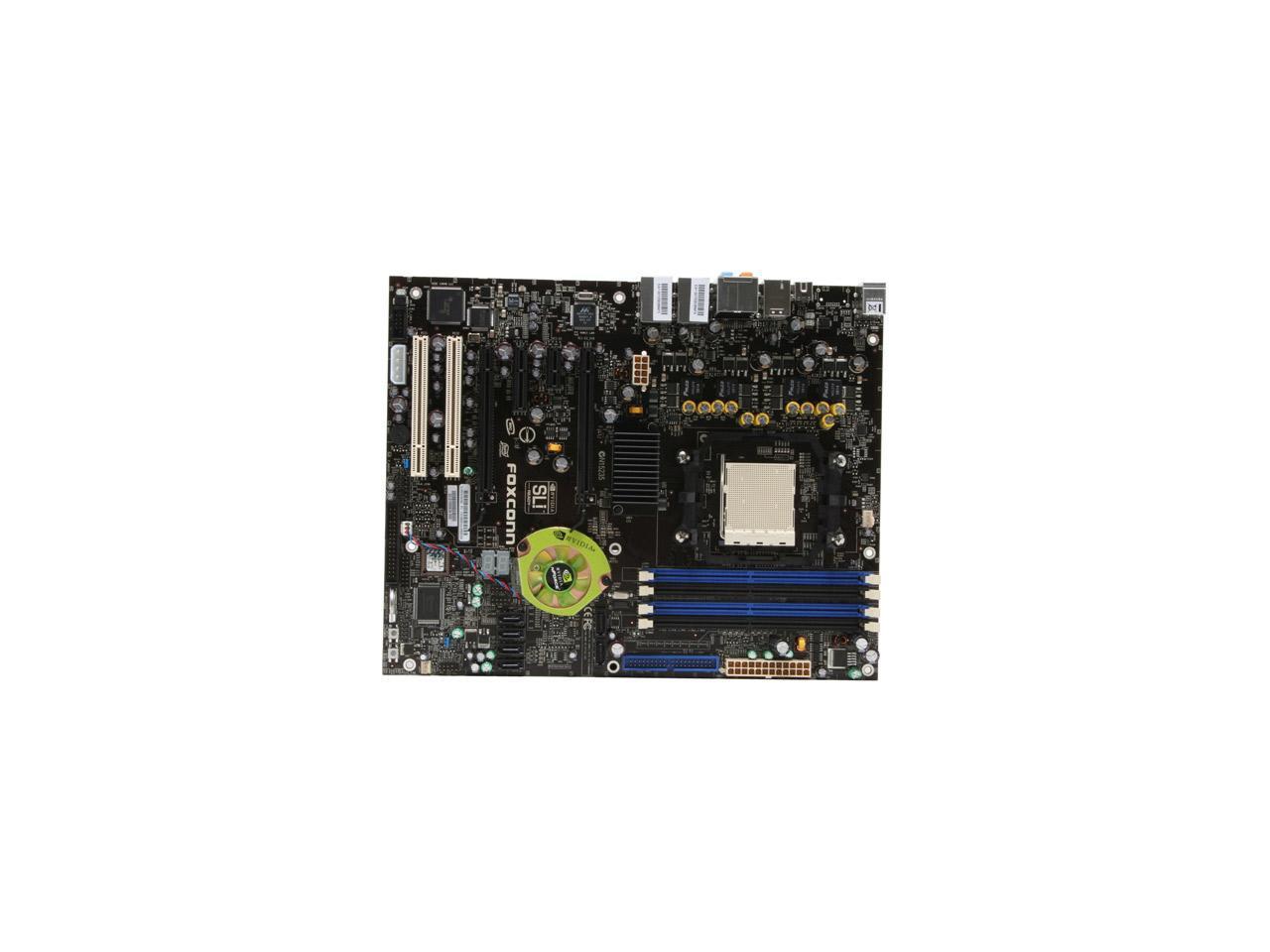 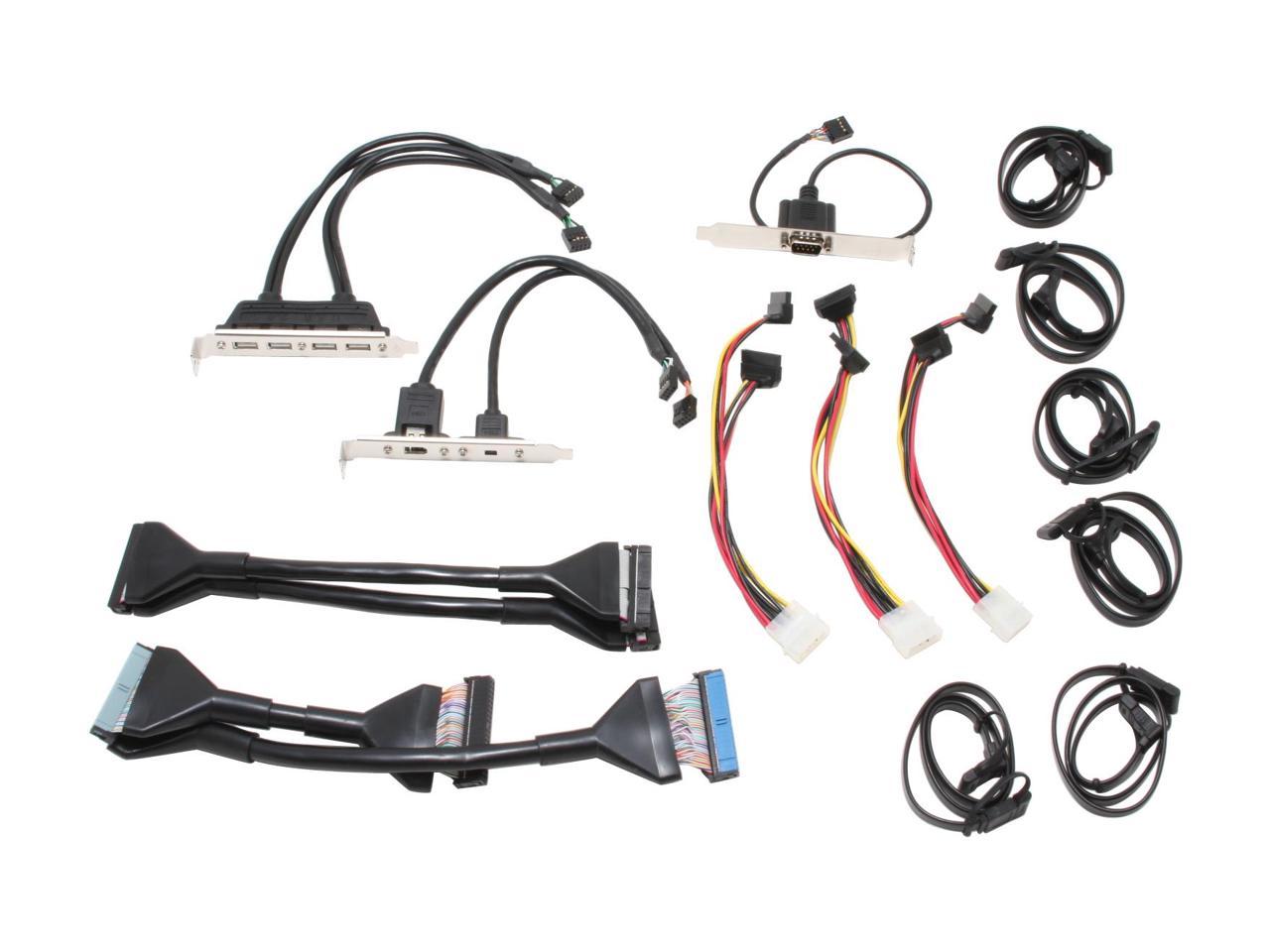 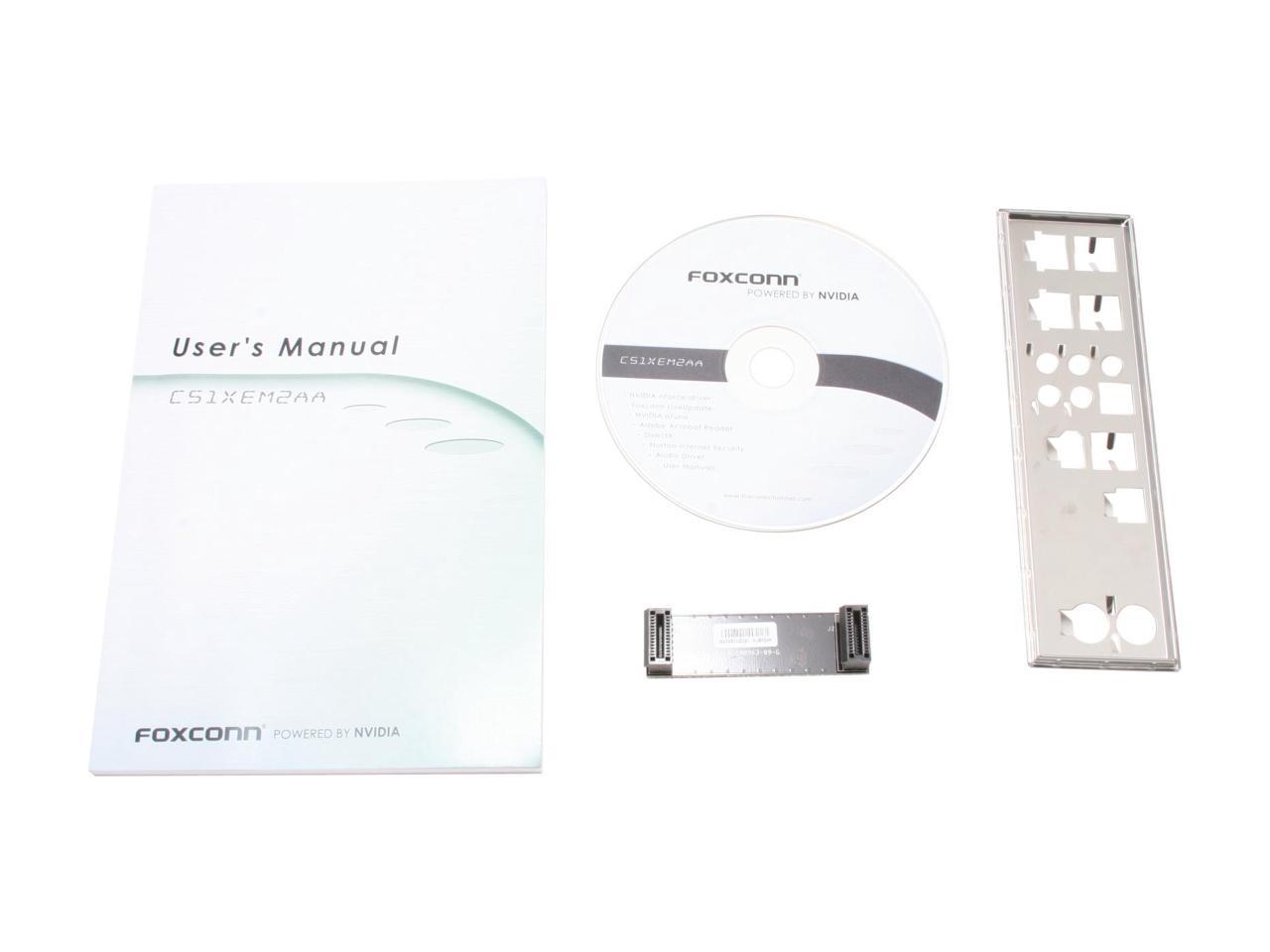 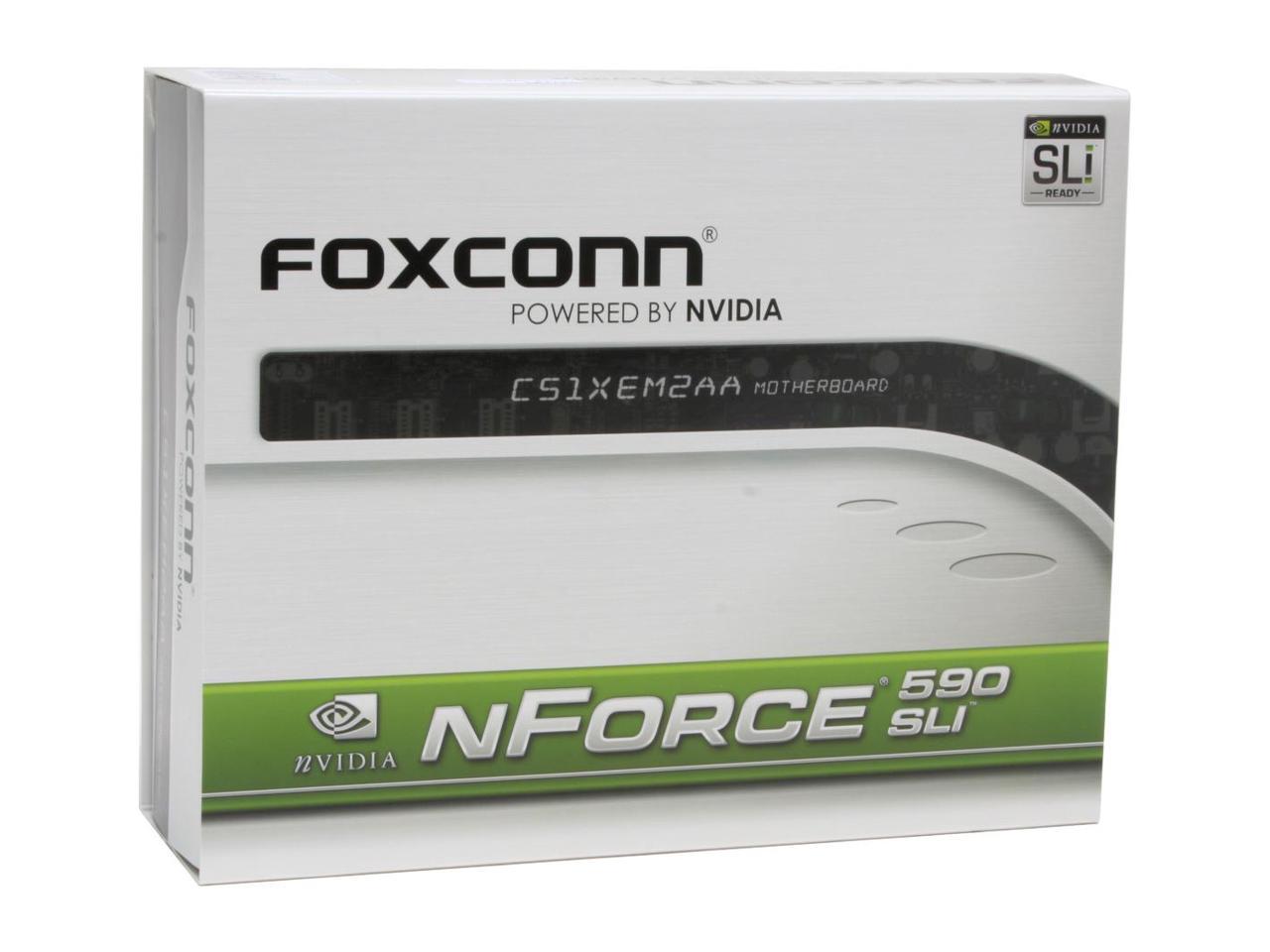 (243) Write a Review
OUT OF STOCK.
Overview
Specs
Reviews
An upscale full-featured motherboard with plenty of power, the Foxconn C51XEM2AA- 8EKRS2H is designed specifically with the gamer in mind. Equipped with an AMD socket AM2, suitable for Athlon 64 processors, including the X2 and FX series, the C51XEM2AA is more than capable of handling anything you deal out. Using the Nvidia nForce 590 SLI chipset the C51XEM2AA supports SLI which gives you the ability to use 2 graphics cards together for even more processing power.
It also includes dual gigabit Ethernet ports, 7.1 channel onboard sound, and 6 SATA ports. Because of those 6 ports, by adding multiple hard drives to the system the C51XEM2AA supports RAID 0, 1, 0+1, and JBOD. It has multiple expansion slots to use including two x16, one x4, and one x1 PCIe slots, plus an additional two PCI slots. For anyone who wants to build a killer system, the Foxconn C51XEM2AA- 8EKRS2H is a great foundation.

Pros: This board holds all 3dMark hall-of-fame records, so yeah it's overclockable. Clean layout. Tweakable BIOS. POST codes and power/rest buttons are great. Firewire 800 (aka 1394b) -- yeahhh.

Overall Review: Must say the NVIDIA software is great. nTune lets you modify BIOS from windows. FirstPacket helps with online gaming. This board is great.

Pros: This board is fast, stable and feature rich. I found it easy to install and set up.

Cons: None so far although I have not been able to overclock very far. Could be I need better cooling.

Overall Review: I have noticed others complain that their Nvidia 7600 series cards won't work. I installed an Xfx 7600GT and am not having any issues at all so it is not entirely a compatibility issue with the GPU.

Cons: No bling unlesss you like black. You have to make your own F6 disk. Uses a 2 prong power on led connector. I'm going to change my 3 prong.

Cons: Would have liked to see more mobo fan headers, but that's a VERY minor qualm.

Overall Review: Things to keep in mind: -The "3 pin speaker header" talked about below is not a connector - leave the jumper where it is by default, that is the mobo's onboard speaker. No need to use your case's speaker. -Some people have talked about how to set master/slave for sata raid drives - SATA are always master as there is one drive per connection. Raid just registers one as primary and one as secondary, automatically. -If you are planning on installing ur OS on a bootable raid array, then you need to use the F6 raid disk utility to make ur raid driver floppy. The official instructions are stupid - hunt around on the foxconn CD in the folders until you find a little F6 raid disk utility, I forget the exact name but it's obvious. It's a translated program with bad english but it works flawlessly, just asks u to format a floppy and it makes it with the push of a button.

Pros: Layout is good as you can run SLI and still have access to a PCI slot for a sound card or other card. LED post display is a nice feature along with onboard power and reset switches for out-of-case testing. The BIOS is the largest I've ever seen in 10 years of rig building (nVidia reference bios). It gives you finite control on clocks, voltages, timings, drive strengths, OC profiles, and a large variety of other useful settings you would only expect to see if you were an electrical engineer actually working on the final testing phase of the board. It overclocks well and so far I have it stable at a 416 HTT x 7. Decent voltage range for CPU and memory: mem volts are from 1.8 – 2.5 and CPU volts are 1.25 to 1.85. This board works perfectly with P@triot memory XBL series DDR2 1000. Overall this is a satisfying motherboard to own and has a lot of potential—Foxconn did a great job on this board.

Cons: None that I have discovered so far.

Overall Review: The SPP heat sink is passive and aluminum. If cooled by your CPU fan you will be ok temp-wise. If you water cool the board be prepared to buy an aftermarket chipset cooler for the SPP, or at the very least install a helper fan for it; it gets quite hot for such a small chip. The stock MCP cooler is adequate and the tiny fan is completely silent—yes it really is inaudible. If you reset the chipset heat sinks w/Arctic5 then also have some acetone handy (straight acetone and DEFINITELY not nail polish remover). Isopropyl alcohol is useless on the types of thermal pads used on these chipset heat sinks, Acetone however, used judiciously, works great to remove the bubble-gum-type thermal transfer pads on both the MCP and SPP chipsets and heat sinks without harming them.

Pros: Nothing couldnt even test it out

Cons: I bought this motherboard to upgrade a system. I spent about 600 dollars on parts and encountered "various" problems. Hooked this motherboard up to my old pc case and hardrive. Thought the hardrive went bad so i bought windows xp home and a 250 gb wd. Tried booting again. Nothing would come up on the screen. Thought the video card was defected so i sent that in for a replacement. After about 3 weeks of frustrations trying to figure it out, i took it to a computer store near my house. After about 4 days i got a diagnostic for 60 dollars and they found out my motherboard was bad.

Overall Review: Really hope newegg will send me a replacement.

Pros: been running this for 7 months now and still going strong. highly overclockable. tons of BIOS option for overclocking. paired it with and X2 3600+ Brisbane and a decent RAM (mine is Corsair Dominator) and 3 GHz is not a pipedream. OC failure automatic BIOS reset is a must if youre into overclocking. no need for hard BIOS reset. the system will just boot into the default BIOS if last OC setting failed. about the northbridge having a tight fit with 8800GTX, the only problem would be its kinda hard to remove the card since you have to make your way through the clip in the slot which is blocked by the NB cooler

Cons: 1st RAM slot is very close to the CPU socket. don't even think of installing a RAM in this slot if youre using Scythe Ninja, not gonna happen. RAM with huge, tall heatsinks are a gamble to install if youre running heatsinks larger than stock heatsinks so better research first before forking out wads of cash

Overall Review: overall, this mobo rocks big time. was able to achieve 1400MHz on the HT bus (280x5). currently, im running mine at 310x3 (3600+ Brisbane at 2790MHz). getting 70C on 3GHz since im only using better than stock ThermalTake heat sink. as noted earlier, cant install my Scythe NINJA since i run this thing with 4x1GB RAM (2 CORSAIR Dominators and 2 PNY XLR8)

Pros: Has been one of the best motherboards I've purchased so far. Has a lot of features and tweaking functions for almost all the aspects of your computer. One of which that I really liked was: lets say you overclock your RAM and you break something (we all do) well if you do this the board will reset back it's "Last Known Good Configuration" after a certain amount of failed POSTs. The manual is pretty detailed and straight foward, even provides a poster board shot of the components along with a description of each I/O device. Came with plenty of cables, thought the IDE cables weren't the best one's I've seen, they still get the job done. Had a rebate when I purchased it.

Cons: The mobo layout is not this best I've ever seen, the CPU is way to close to the RAM channels, and it makes it very hard to add a larger heatsink to it with out losing a precious slot. It also only has 2 PCI slots. I see plenty of room for more slots, Foxconn instead added a useless PCI x1 slot...like anyone is going to use that anytime soon! That rounded IDE cable is about the worst mess I've ever seen. The wires are all out of wack, crinkled up, and the shielding is easily miscontruded. So expect to buy some additional IDE cables for your CD drives and Floppy drive(should you have one in this day and age). The price hasn't dropped since December of last year and the rebate is gone.

Overall Review: Overall it's a good board, I wouldn't hestitate to get another one. And I recommend any gamer who loves tweaking things to consider this board seriously. Oh and for those wondering about Vista compatibility--don't. Loaded the drivers just fine. However the 64-bit users will have to ignore the driver installation software and do it manually from the device manager. But other than that it worked just fine.