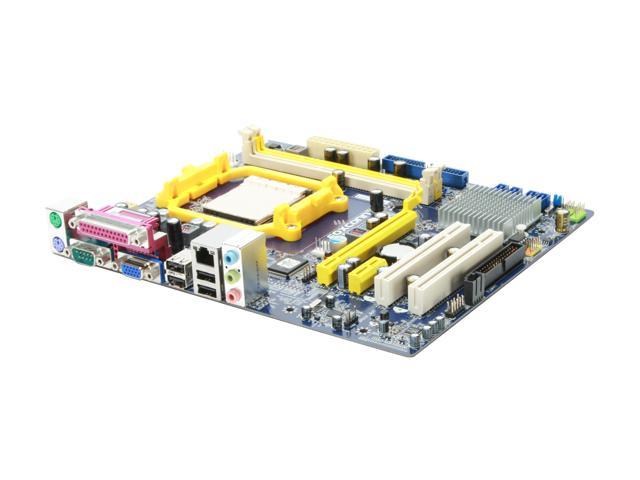 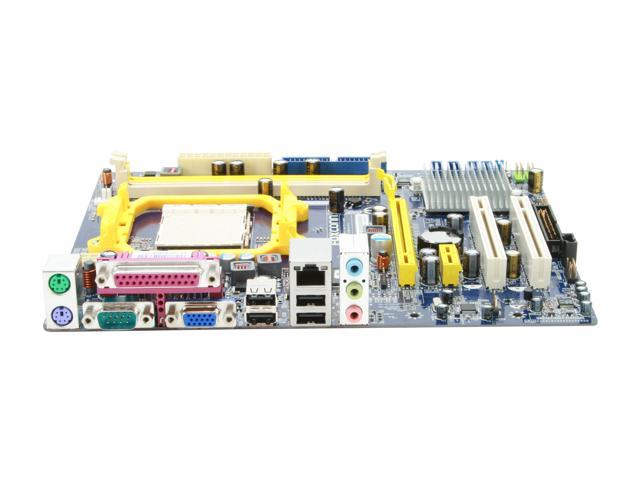 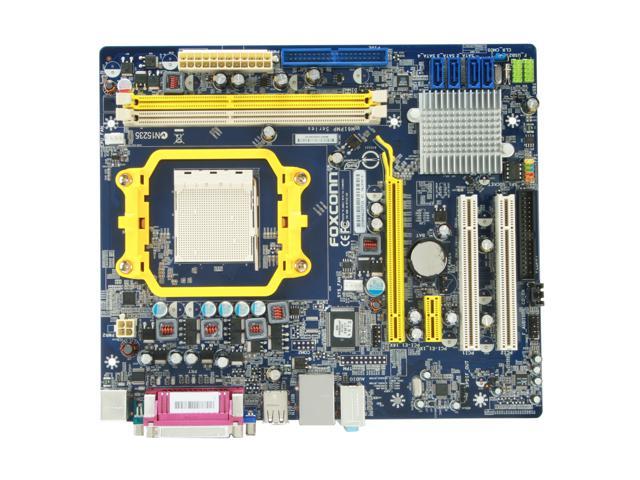 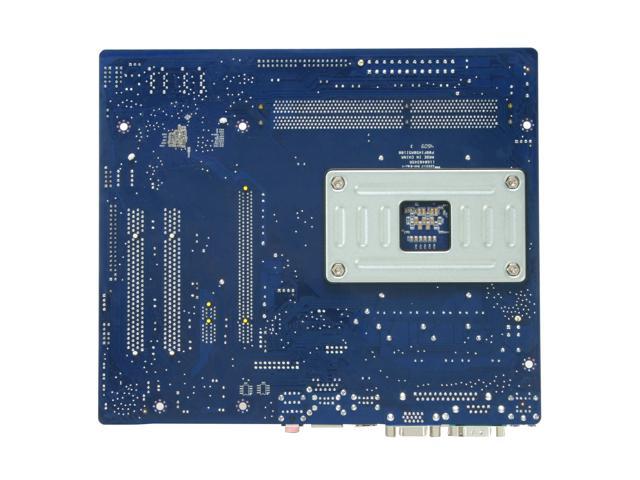 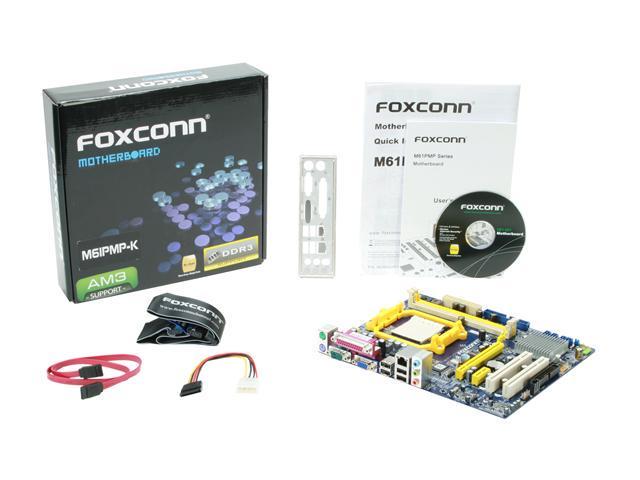 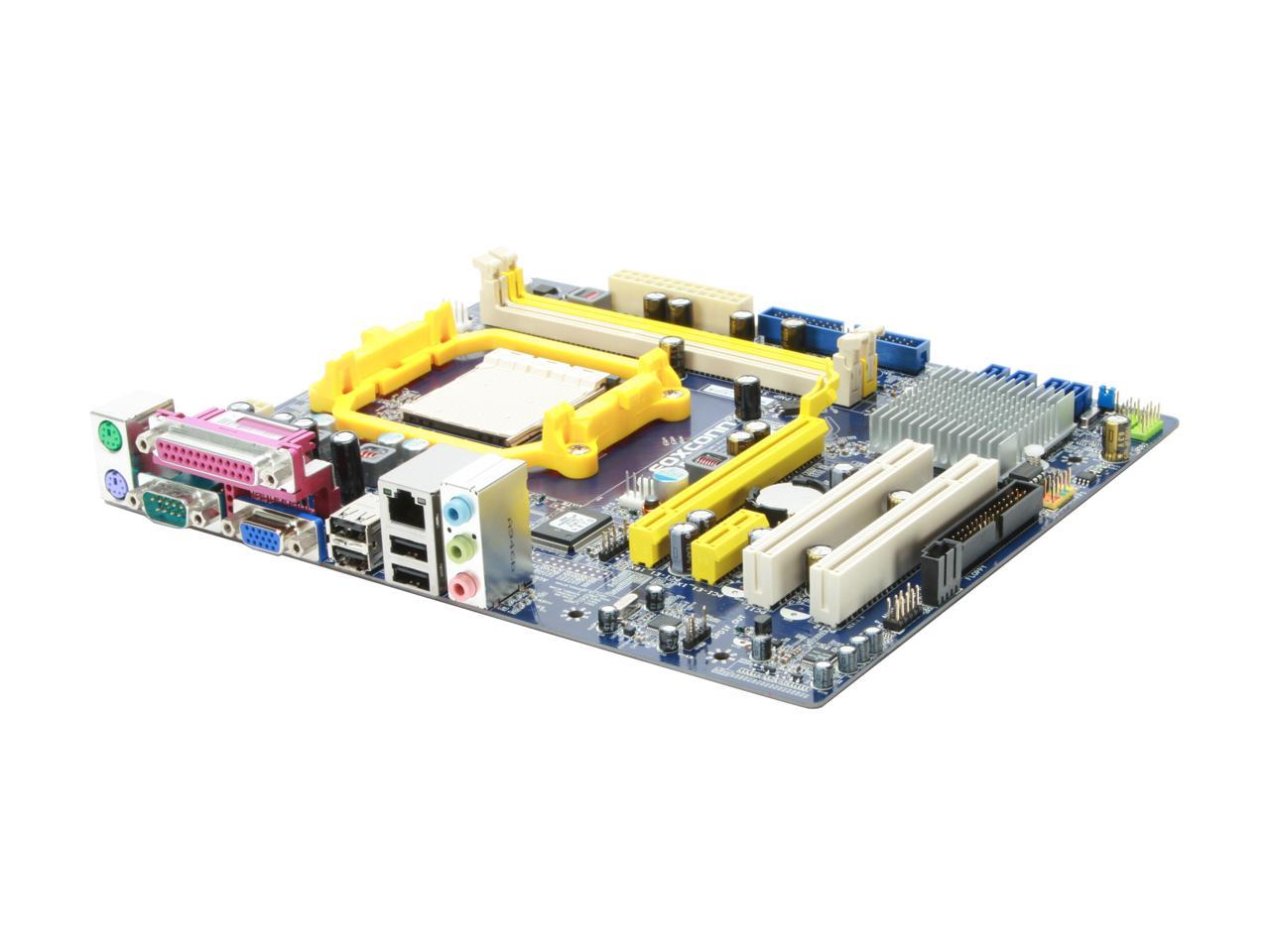 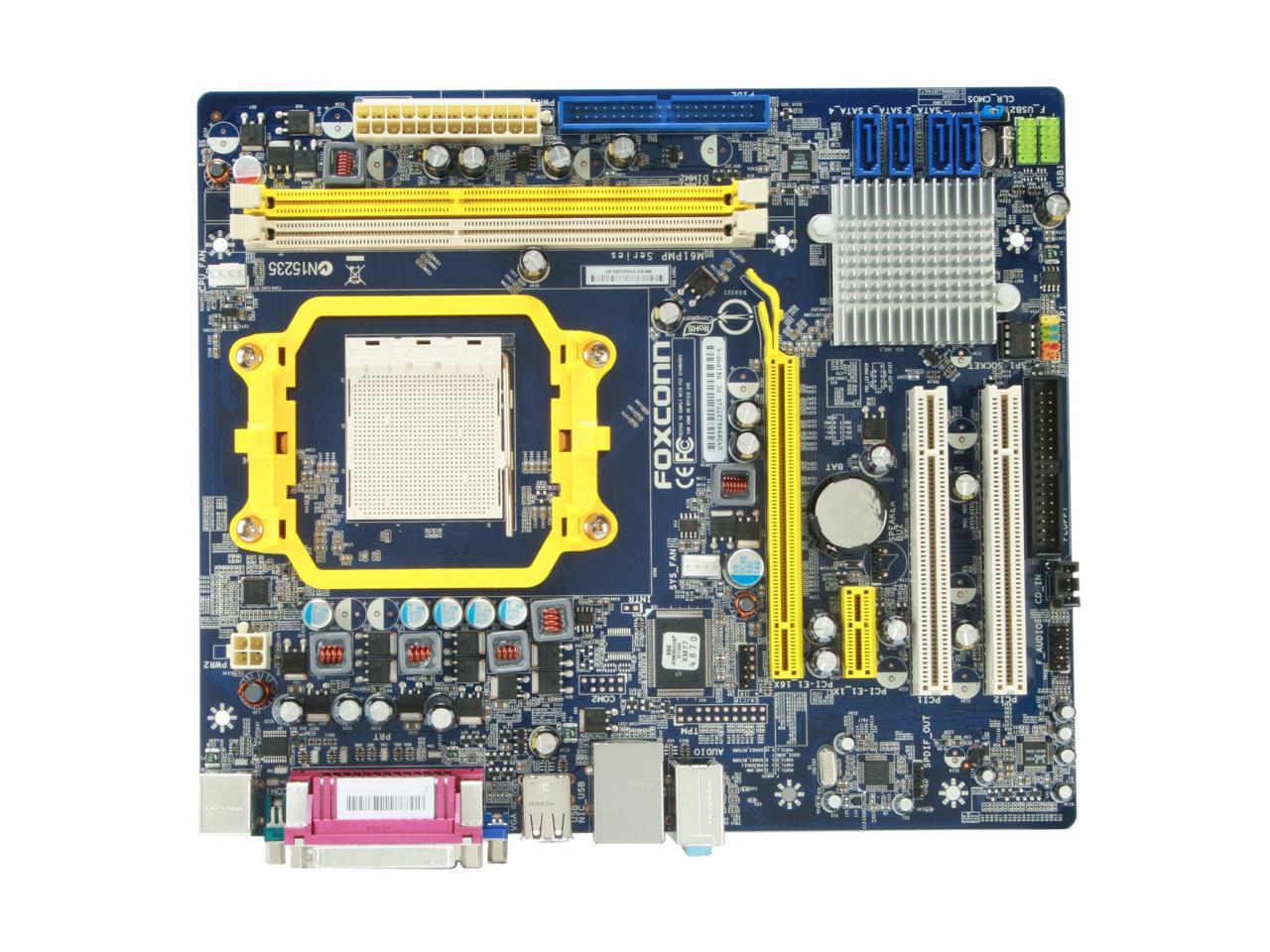 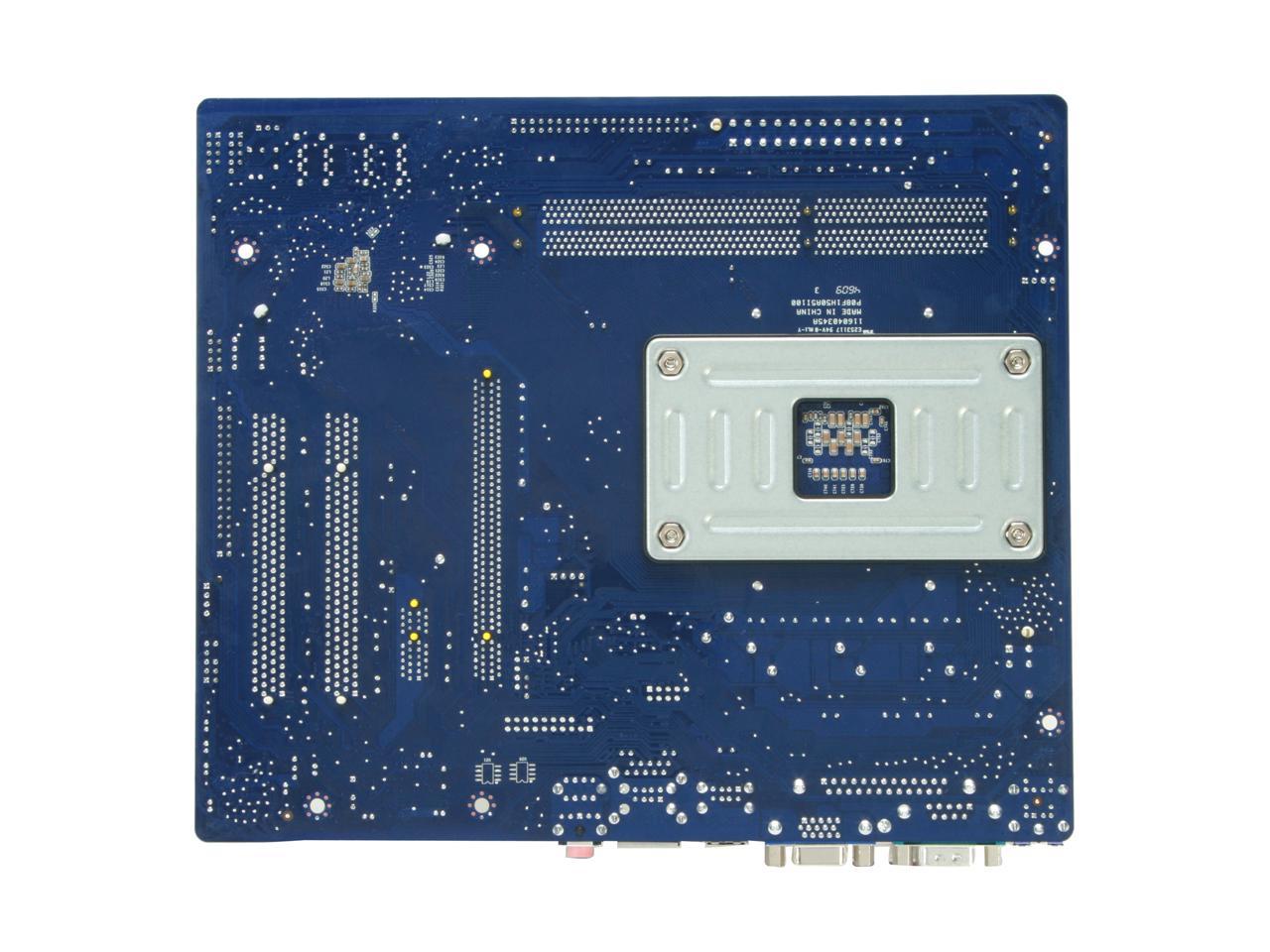 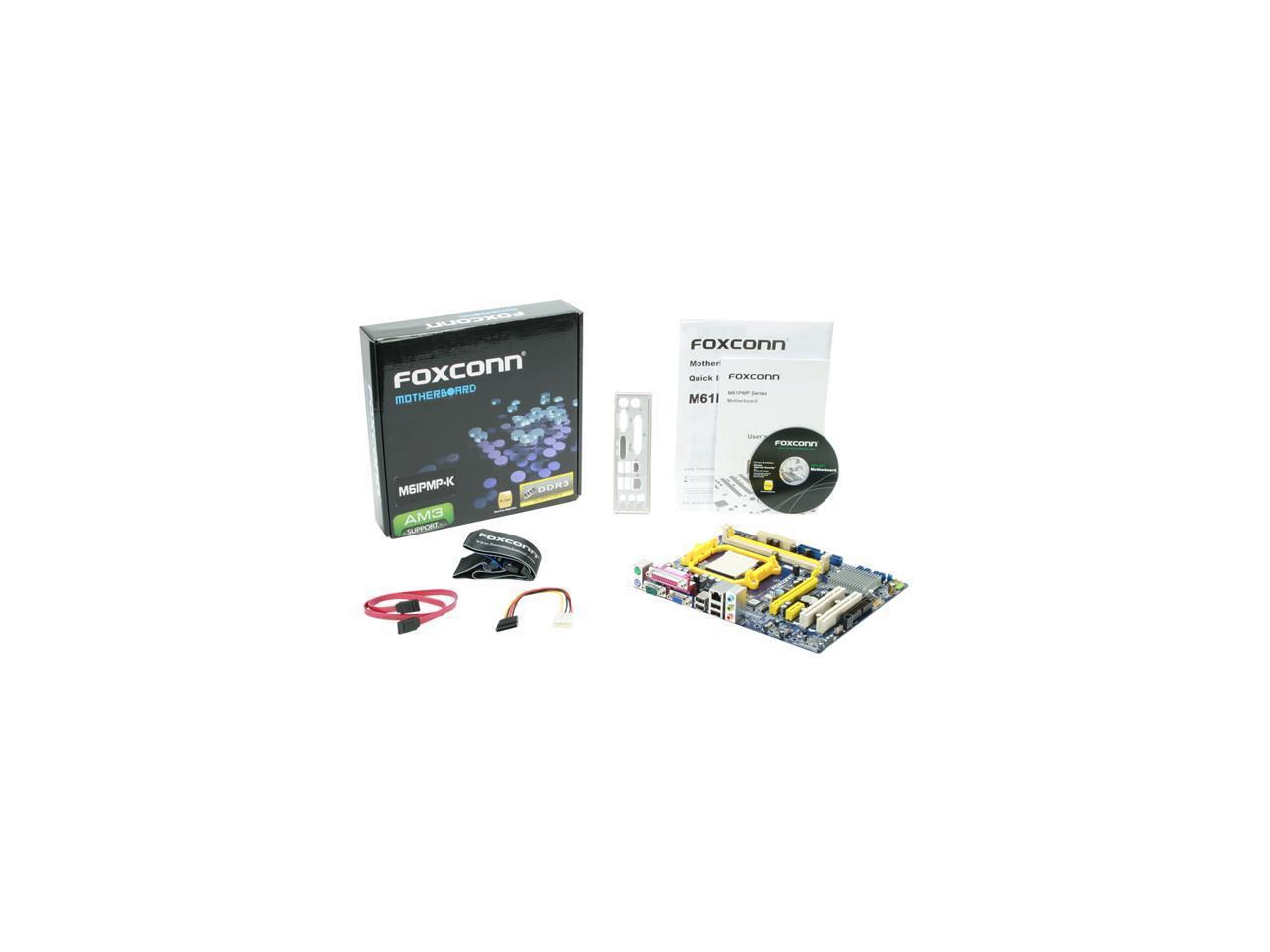 (103) Write a Review
OUT OF STOCK.
Overview
Specs
Reviews

Foxconn's M61PMP-K is an affordable Micro-ATX motherboard that's ready to let you experience the power of the AM3 processor. Get ready to rock with AMD's Phenom II with 1000MHz Hyper Transport technology speeding transfers between the processor and the onboard components – including the NVIDIA MCP61 chipset. A pair of 240-pin memory slots let you install up to 4GB of RAM with full dual channel support. Boost your video performance further with a graphic card in the PCI-Express x16 slot and add other cards in the PCIe x1 and PCI slots.

Achieve high access rates with up to four 3Gb/s SATA devices with the option to configure them for RAID operation. Four USB 2.0 ports allow you to attach peripherals and integrated Ethernet lets you connect to a home or business network. The onboard audio delivers six channels of sound to enhance your viewing or gaming experience.

Learn more about the Foxconn M61PMP-K

Overall Review: Onboard Video comes preset at 128MB Buffer, you can set this up to 256MB in the BIOS. 4GB DDR3 1066 used. 3.0Ghz AMD Athlon II 250 used. CPU and Stock Heatsink Mounted to this board perfectly.

Pros: Installation went without a hitch. Paired with an AMD Sempron 140 and 2gb of crucial DDR3 and Windows 7 64 bit and this bad boy is running smooth. No drivers needed to be loaded for Win 7 installed everything. Most painless installation in a while. Also, on requires a 4 pin 12v connector making it compatible with older PSUs. Many new boards now require 8pin 12v cables.

Overall Review: Great budget board. Native video chipset not ideal for HTPC but can easily add a $25 silent 4350 with HDMI card and this will then serve as a decent HTPC board.

Pros: Low cost. DDR3 support. Clean board layout. Good compatibility. Good quality board level components (caps, coils, VRMs, etc). Runs a Regor 250 just fine at stock speed and voltage (I don't plan to OC this system as dual 3GHz cores each w/1MB L2 is plenty of horsepower). Excellent AMIBIOS implementation. Correctly automatically disables onboard video when PCIe video board is installed. Will correctly boot an SSD connected via a Silicon Image PCI SATA controller, even though the BIOS doesn't explicitly offer such a boot option. This feature saved my bacon, read below. I'm really impressed so far with the quality and features of this board given the price point. I highly recommend it as a repair/replacement or new build motherboard.

Cons: Neither the BIOS nor the FoxOne software correctly report the temperature of the Regor cores. Initially I assumed this was a mobo problem. Contacting Foxconn support yielded no definitive answer. They simply suggested flashing the BIOS with no assurance that doing so would solve the issue. My research into this issue shows that AMD, in its infinite wisdom, changed the output voltage of the thermal diode embedded in each core of the Regor, Callisto, and later chips. I have still found no definitive information as to what offset to use in order to get a true temp reading. The CoreTemp documentation says the offset should be set somewhere between 10-20 degrees Celsius. Currently I'm running with a 15C offset which seems pretty close based on a number of factors I won't go into here as 10000 characters isn't enough. I hope to find definitive info on this at some point.

Overall Review: In 2003 I built a new system from all Newegg components. Ran flawlessly, powered on for 8 years straight. Recently the Biostar nForce2 mobo bit the dust. It housed an Athlon XP Barton and eVGA Geforce FX5900 reference design. To repair it I ordered this Foxconn, a Regor 250 CPU, 2 Crucial Ballistix DDR3 1GB sticks, a PCIe x16 PNY Geforce GT240 w/1GB DDR3, and a new PSU. The machine had been running WinXP with all updates, the old nVidia nForce platform drivers, fairly recent nVidia GPU drivers, and an add in Silicon Image 3512 PCI card with a Corsair V32 SSD attached, from which the system was booting. I gutted the chassis of everything but the optical drive and the SSD. I installed the Foxconn, dropped in the GPU and SATA cards. I powered up, the Foxconn booted the SSD, and all I had to do was install all the new drivers. The fact the board correctly booted the SSD prevented me from having to do a total WinXP reinstall. Again, this is a great little motherboard.

Pros: Very easy to install. Runs solid as a rock. Stuck a X2 555 in it and bought this mobo with the understanding that I didn't want to try and unlock the other cores. I read that it was a roll of the dice. Put the dual channel DDR3 1300 4 gig. Did I mention that it runs cool and quiet even with the stock fan. Running Linux 64 from a stick right now.

Cons: I ordered my operating system the day after ordering the hardware.

Pros: Low cost board. Received in good condition from newegg.

Cons: Just as several other reviews have complained about - this board was dead when I got it. Onboard video doesn't work at all. Got everything installed properly including case wires etc, system will not successfully boot. System fans will all turn on and it sounds like the system is booting, but will display no video. Even tried adjusting the clear-CMOS switch as indicated by other reviews. Still dead. Returning this board and will try a replacement.

Pros: I'm running out of boards to try. First board I bought was DOA, now this one is DOA. I guess Foxconn needs to up the wages to $1/hr over there to get some quality. Why does Newegg sell parts with 15%-20% of the reviews being DOA? Just stop selling them.

Cons: Newegg deserves as much blame as the manufacturer. They can see how many people are returning these things and they don't have to keep selling them.

1 out of 1 people found this review helpful. Did you?
Manufacturer Response:
Dear Valuable customer, We apologize for the inconvenience. But the probability of getting two DOA boards is very low. So please verify that your processor is being listed on our compatibility list and Clear CMOS jumper is being set to the correct position. See attached image. Also we would recommend to setup the board outside the case with the below configuration: Processor with heatsink fan 24pin & 12v 4pin power connectors (110 or 115 on the back of the power supply) Speaker buzz (see attached image) Power switches Then turn the unit back ON and let see if it will generate any beep codes. If you do hear the memory beep code then turn it OFF and just install a single stick of RAM to see if it can post with just one stick first. CPU Compatibility list for M61PMP-K: http://www.foxconnsupport.com/cpusupportlist.aspx?type=mb&socket=Socket%20AM3&model=M61PMP-K&cputype=AMD If you are still experiencing this issue, please contact our support team via link below or call 909-978-6556. If all of our support reps are currently on the phone or if you are calling after business hours please leave us a message with your contact info so we can call you right back. Our hours of operation are (M-F from 830am-530pm, PST, excluding public holidays). Or you can submit your email to our online support team via the link below. So we can help you with the troubleshooting steps & RMA process. http://www.foxconnsupport.com/inquiry.aspx Again, thank you for purchasing Foxconn products and taking the time to provide us with valuable feedback. Your business is appreciated. Best regards, Foxconn support team

Cons: None that I could remember.

1 out of 1 people found this review helpful. Did you?
Manufacturer Response:
Dear Valuable customer, Thank you for purchasing Foxconn products and taking the time to provide us with valuable feedback. Your business is appreciated. Best regards, Foxconn support team
David K.
Ownership: 1 day to 1 week
Verified Owner
Nice while it lasted1/4/2012 8:09:02 AM

Cons: Failed within one week. Now I have to RMA the board and my customer is not happy.

Overall Review: If you are considering this board, read the reviews and notice the high failure rate. Maybe you should order two and keep one burning in on the bench for a few weeks.

1 out of 1 people found this review helpful. Did you?
Manufacturer Response:
Dear Valued Customer, We apologize for the experience you had with your Foxconn product. Please contact officiate warranty via RMA center in US,Please dail below tel number and ask for RMA. Tel: 1.909.978.6556 (8:30am - 5:30pm PST; excludes national holidays) Best Regards Foxconn Technical Support