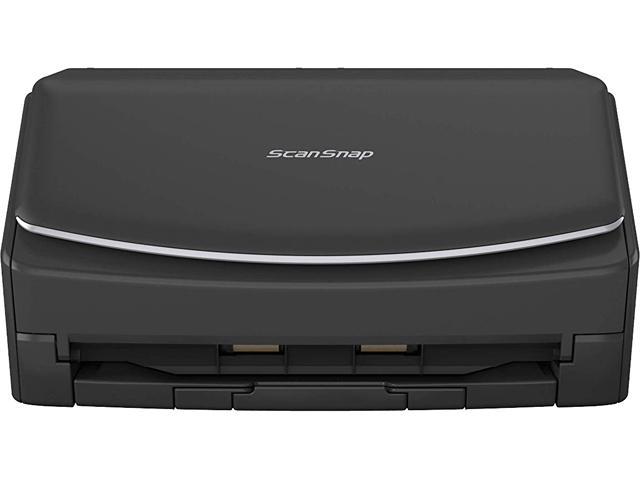 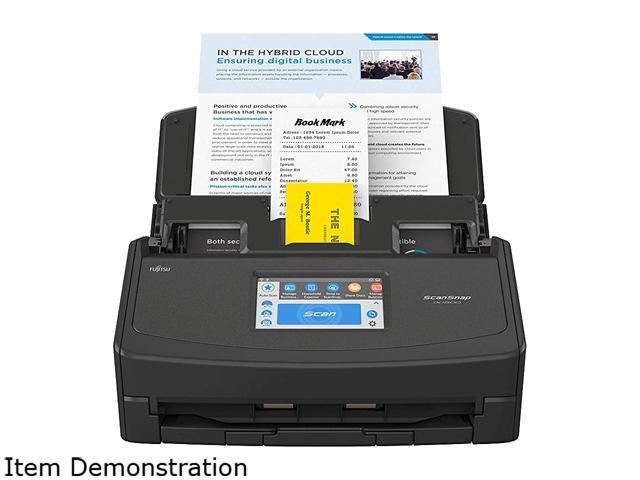 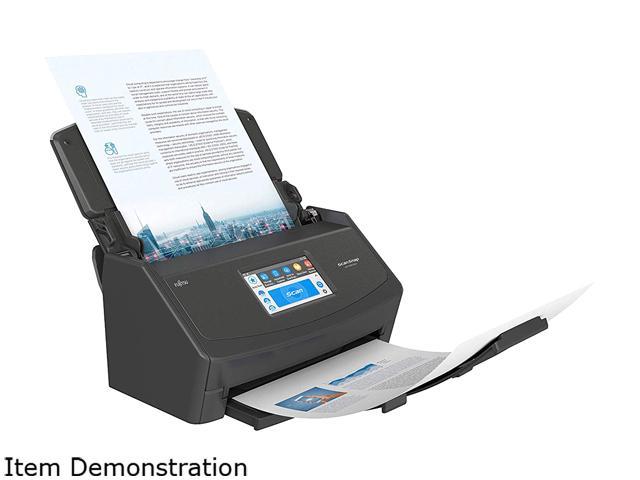 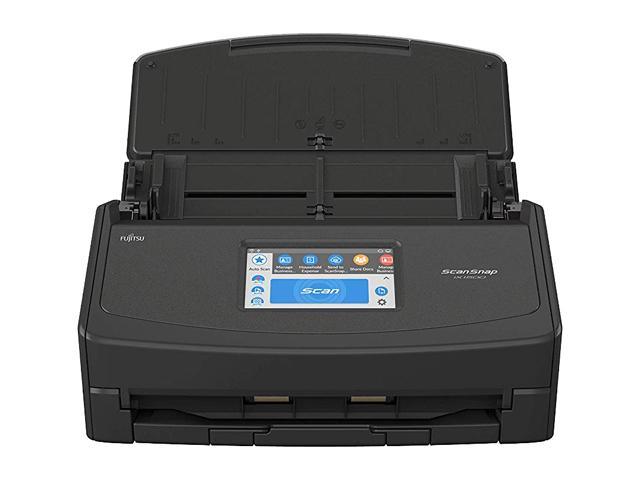 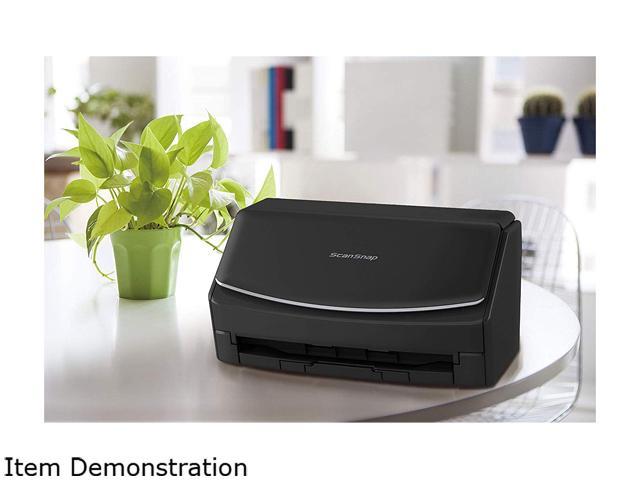 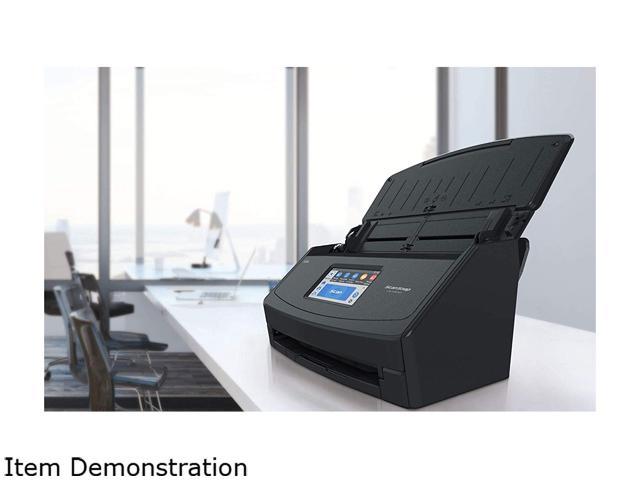 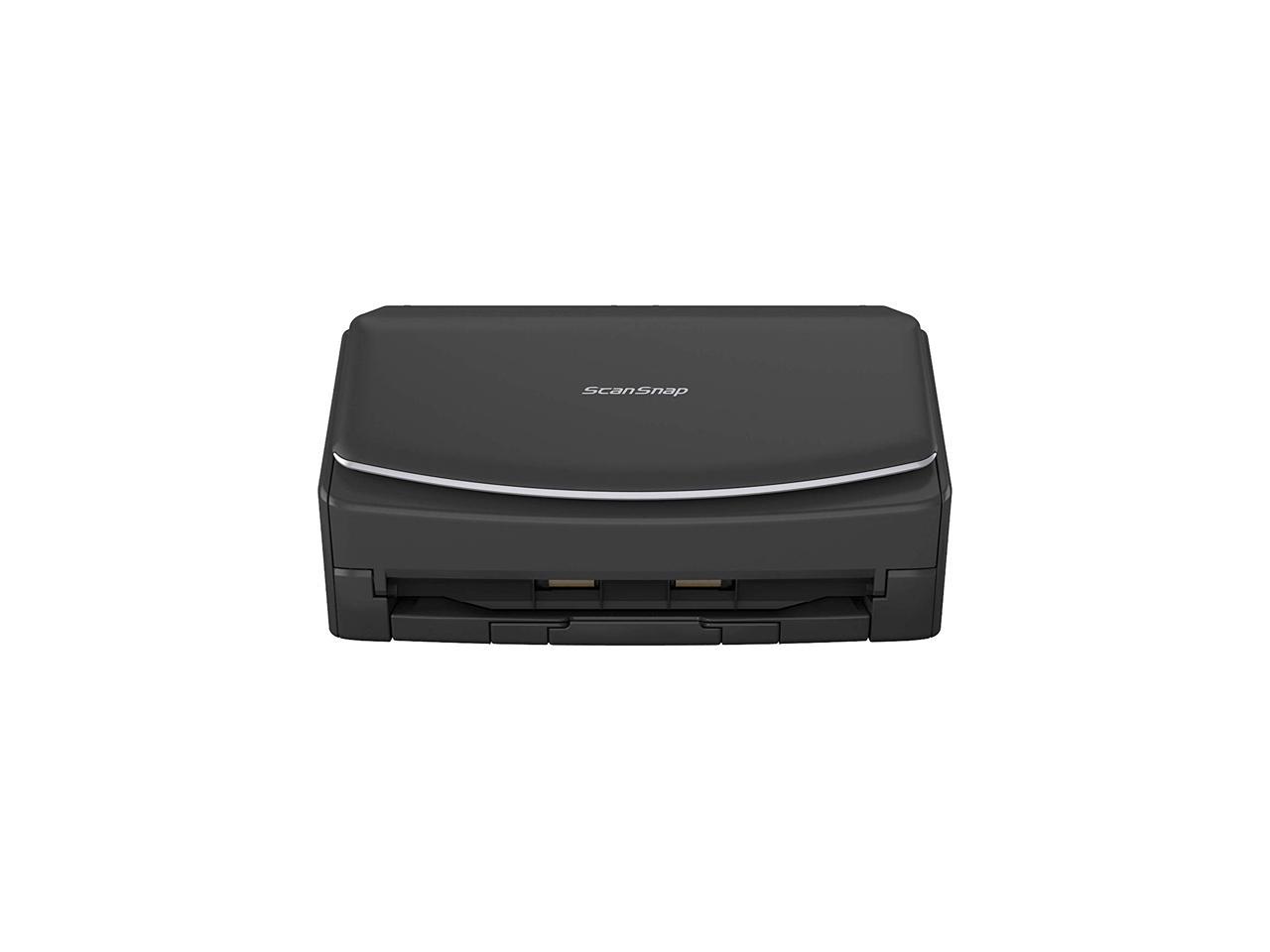 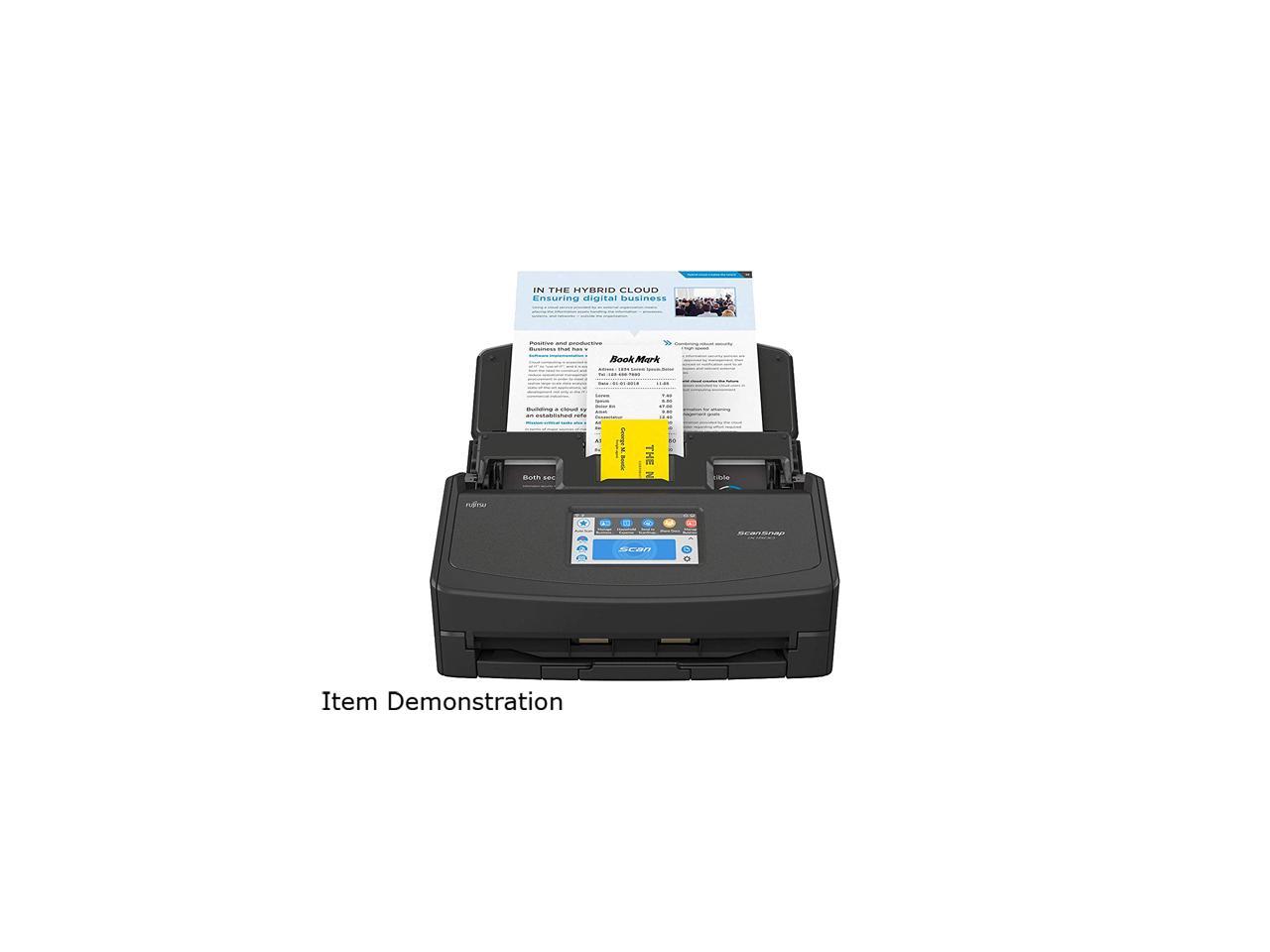 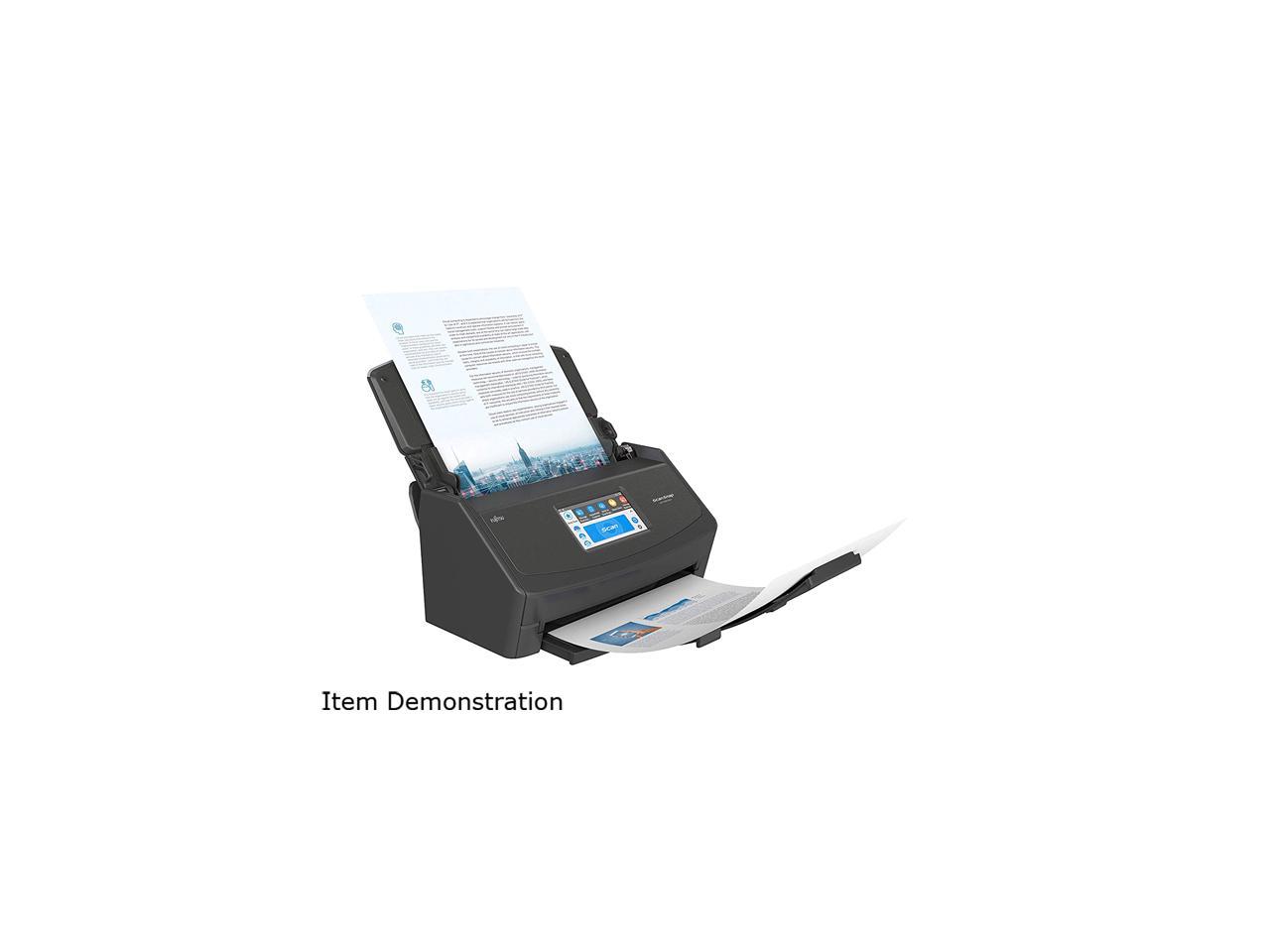 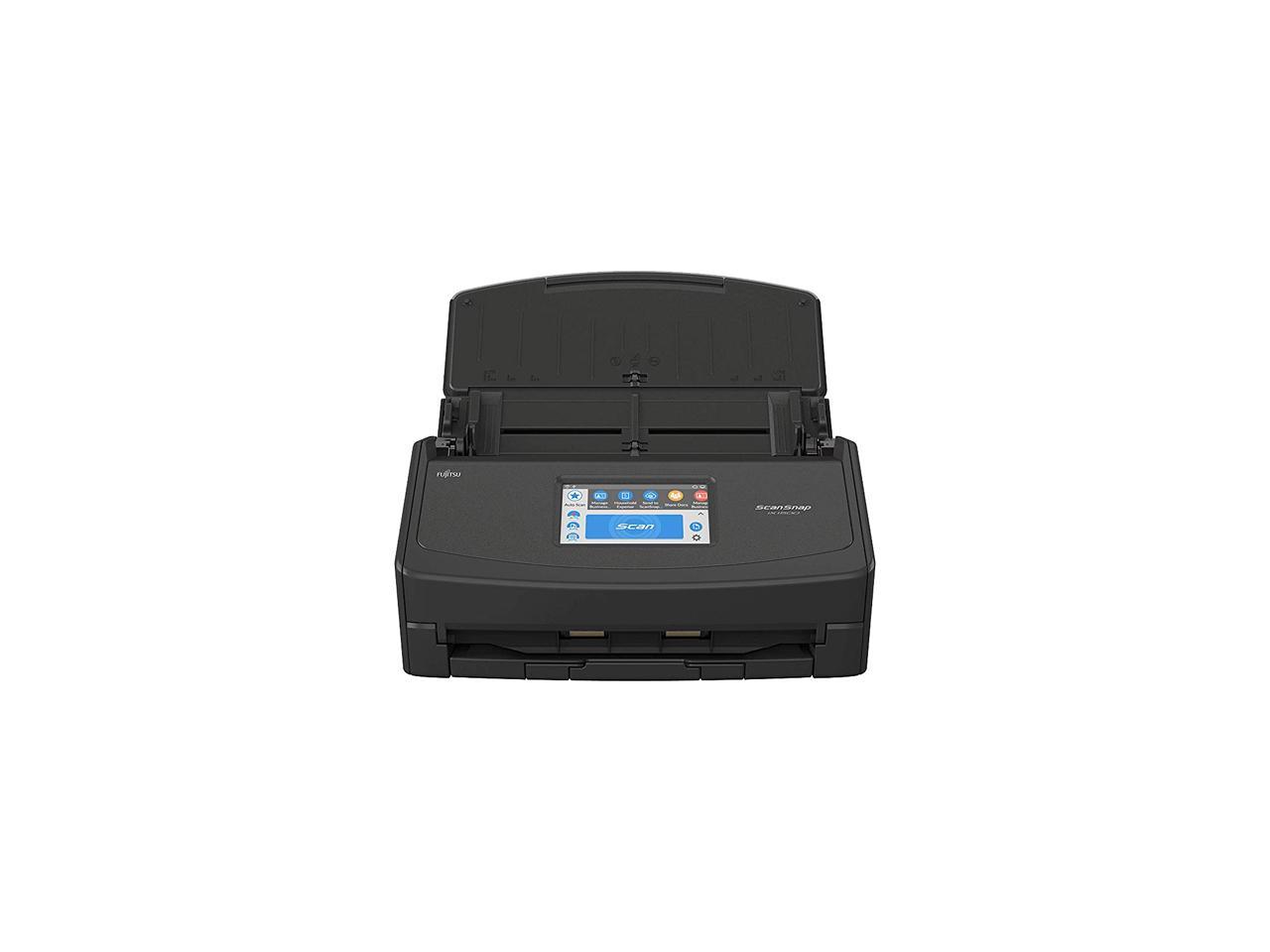 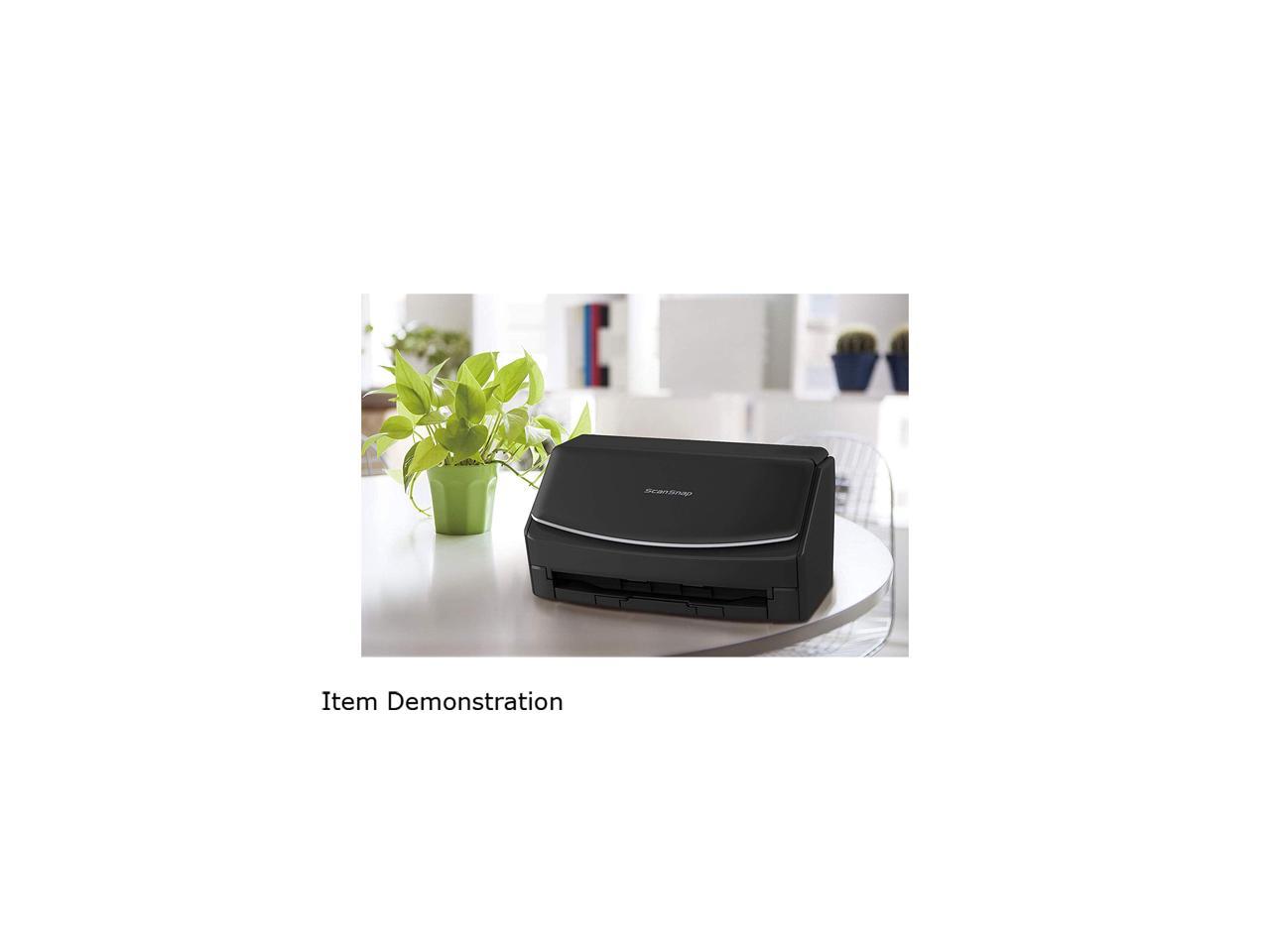 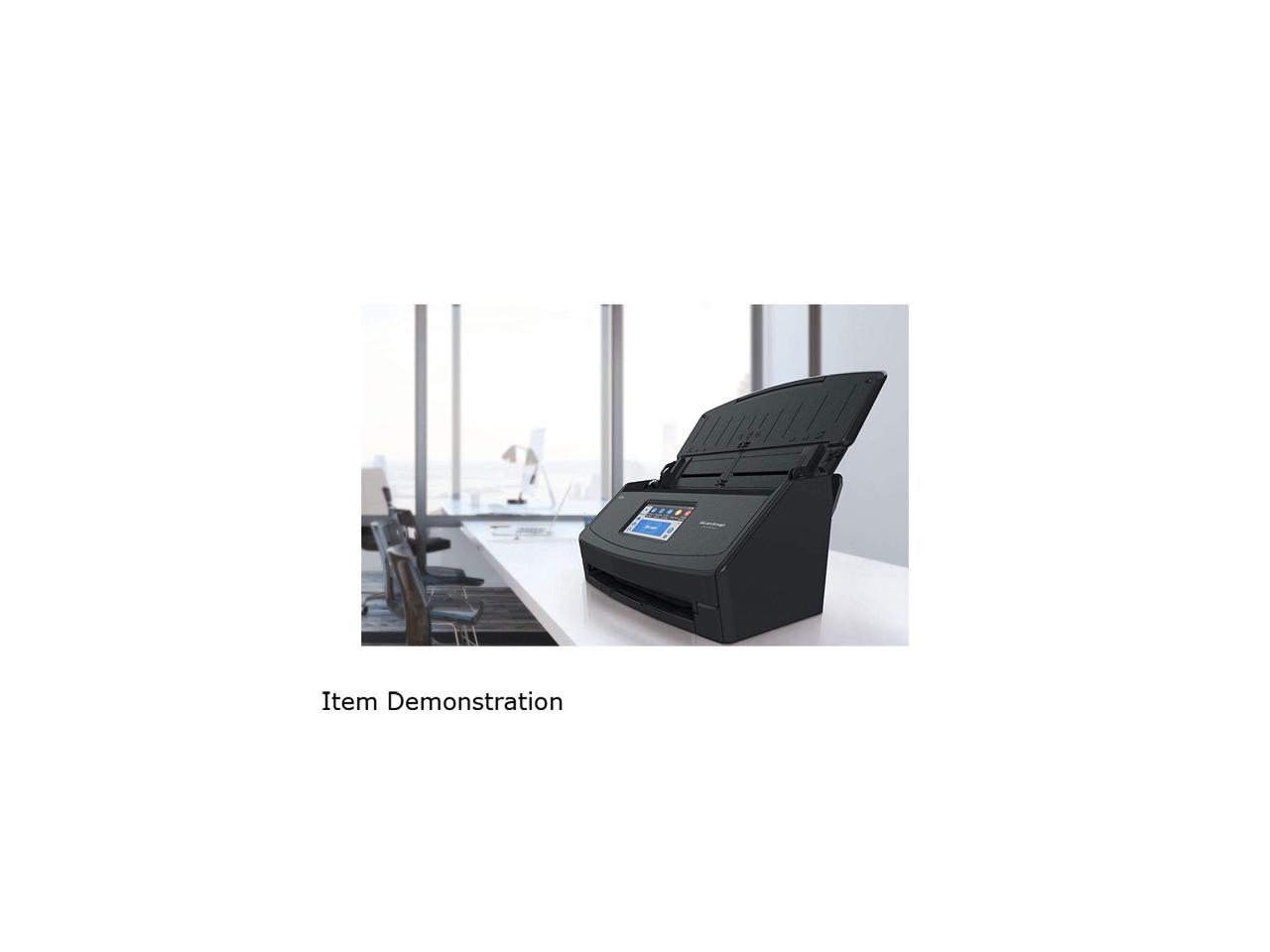 ScanSnap iX1500 Wi-Fi Cloud-Enabled Document Scanner (Black)
The ScanSnap iX1500 document scanner is now available in a new black-on-black color option and comes equipped with a user-friendly 4.3" touchscreen interface for enhanced usability and functionality. With Access Point Connect and Direct Connect modes, users can place the new scanner anywhere that is most convenient for them. The new intuitive scanner also comes with new ScanSnap Home software that combines all the popular functions of our business card, receipt, and document-management apps into one interface for easier management and editing. Pros: I have been using ScanSnap scanners sice the s500. I use them so much that I have actually worn out a few. We're talking hundreds of thousands of pages scanned at least. This scanner seems to be an improvement over the ix500. It is sleek, fast & quiet. I would also prefer a black model, but that's really neither here nor there.

Cons: The software, ScanSnap Home is definitely worse than the the prior ScanSnap Manager. In addition, the ix1500 is not compatible with the older software. It seems that by giving the scanner and scanning software a fresh coat of paint, they've also dumbed it down to the point that it is not as useful as it was before. I've only had the scanner a couple of weeks, but am at a loss of what Home improves upon over Manager. A couple of examples: 1. My normal scanning profile is set to Duplex scan and set to automatically remove blank pages. In ScanSnap Manager, if I wanted to scan a document as Simplex all I had to do was right click the icon in the system tray and click "simplex scan." Now, I have to open ScanSnap Home (no more system tray icon), click "Scan," then "Change The Scanning Side," then "Simplex." What used to be a half second job is now about 15 seconds. 2. For some reason, Fujitsu, made a small change to the file saving that makes my workflow way more difficult. The way things used to work were as follows. I could scan a document, rename and choose the destination folder and then open in the application of my choice. Now, I can either save to a default folder and open in (for example) Acrobat, OR I can use the "Verify and Save" feature to rename the file and choose it's destination. Why? The only reason I can think of is that Fujitsu wants you to use its could service and scan history program.

Overall Review: If you are not a power user or particular about the settings you may have grown accustomed to in ScanSnap Manager, this is a fine product. I would also like to add that Fujitsu's customer service was very prompt and helpful in helping me determine if the old settings were buried somewhere else in the menus (they're not). Finally, and somewhat humorously, they offered to enter restoring these functions as a feature request but admitted that I would probably never hear back.

Pros: Scanning action and speed are fine, maybe slightly faster than the ix500.

Cons: The desktop software is really terrible. Multiple button pushes/actions just to scan, and then deal with the Scansnap Home organizer. The ix500 allows one button scan, then allows you to then work w/ the resulting pdf w/o having to push more bottons, click on more boxes. The ix1500 software makes you do much more to get to your scan. I had read other reviews on this, and thought, how bad can it be? Those reviews are all spot on!

Overall Review: I need four more scanners. I bought this ix1500 to test, see if I wanted to have all new scanners be the ix1500, or whether I'd buy more of the ix500s. I'm leaning towards the ix500's. Oldy but a goody.

Pros: - Faster than the ix500 - Super Easy setup (wayyyy easier than every SnanSnap before it and I have owned every ScanSnap since 2005)

Cons: - Office equipment should be matte black and non-reflective (the bright white color is a turnoff as is the shiny silver ScanSnap logo on the front. Seriously folks, eye-strain and eye-fatigue caused by reflections are in issue in the workplace that is why office desktop equipment is matte black and non-reflective) - The default "file name prefix" (aka "date format") was changed to YYYYMMDD instead of YYYY_MM_DD. I was able to change it back in the settings but this seemed odd as the default was YYYY_MM_DD for a long as I can remember and all of my scans have this format. - The ScanSnap Home saves a copy of all scans in a hidden folder and keeps them for the last two weeks. There is a way to disable this in the settings. I had to turn this off even though I avoid ScanSnap home and scan directly to folder.

Overall Review: - Does not include Adobe Acrobat (maybe a good thing :-)

Pros: ScanSnap iX1500 is an enhancement of the iX500. The various document profiles are now on a display on the scanner as opposed to selecting from the 'hidden icons' on the task bar. This makes for a easier user interface. All the options that were allowed with the iX500 and ScanSnap S1500 are still available as well.

Cons: There is a small learning curve to find where and how to implement user defined profiles and scan locations as well as external applications that may be required by some disciplines.

Overall Review: The ScanSnap iX1500 has fast USB 3 connectivity as the iX500. Users will not be disappointed with this model.

Cons: Jams a lot, already received a replacement that works fine for a week, and started jam not as bad at the new one. Hard to get customer service from Fujitsu or Squaretrade.

Overall Review: If you have xi500 keep it. Not worth to replace it.

Overall Review: Since I'm stuck at home for a month, I thought I might as well bring home a few boxes of files from the office to scan and put into a shred box, do some de-cluttering... This scanner is good, easy to use, nice product.

Pros: After using several different scanners, I decided to switch to the Fujitsu ScanSnap series that a few of my business clients were using. Some were using the Fujitsu ScanSnap ix500 and they all loved it, and some were using the lower models and older models of the ScanSnap series. So I knew ScanSnap had a incredible reputation, and through all the research over the years they were always one of the top rated. Because they were all expensive, I never pulled the trigger. It was only after using a competing scanner that I purchased used from a lawfirm, and which the battery died after just over a year of use, that I decided I needed a "better" replacement. I was about to purchase the ScanSnap iX500 when it was on sale, but then my attention got diverted to Fujitsu's newest model ScanSnap iX1500. In hindsight after all these years of using a variety of different scanners, the ScanSnap should have been my first and only choice. With the ScanSnap iX1500 in my office for the past 1.5 week, all I can say is WOW! I cannot describe how much more efficient that I have since become, and scanning is no longer a dreaded activity. The Fujitsu ScanSnap iX1500 nailed it perfectly and its an honour to have it sitting on my desk, as its now my ultimate productivity machine for my business. There are plenty of options and settings that I just learnt in the last few days, so I am still a newbie. But its proved to be worth more than its weight in gold. I highly recommend the Fujitsu ScanSnap iX1500 for all types of office use, as it pays for itself in terms of efficiency rather quickly. It has to be plugged into a computer or to the internet (cloud storage) at all times. (FYI - I have a newer Doxie Go SE that I use for portable scanning when I am on the road and meeting clients, and for when I don't have access to a computer or internet connection. Its a battery operated and self-sufficient unit that is completely portable. I also have an iPhone scanning app that I use, but its been relegated to occasional use only, since its not the greatest quality of scan.)

Cons: I have not owned it long enough to provide any valid critique. I did encounter that the receipts were being scanned and saved as JPEG as a factory default setting rather than in PDF, but I just learnt in the past few days that I can easily change and customize the setting to whatever I want. PDF is what I changed it too, and is the best recommended scanning archive format that all offices should use. JPEG is great for Photo scanning, and that is the factory default setting for the ScanSnap iX1500. Otherwise there is absolutely nothing here to criticize currently.

Overall Review: If your unwilling to fork money on a high end scanner, get a lower model ScanSnap. If your business relies heavily on scanning, then get a ScanSnap iX1500 or a ScanSnap iX500. If you want the absolute best scanner, then the ScanSnap iX1500 is the best.