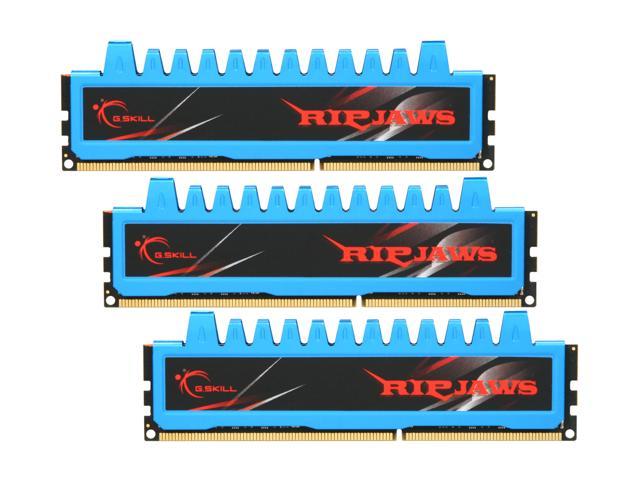 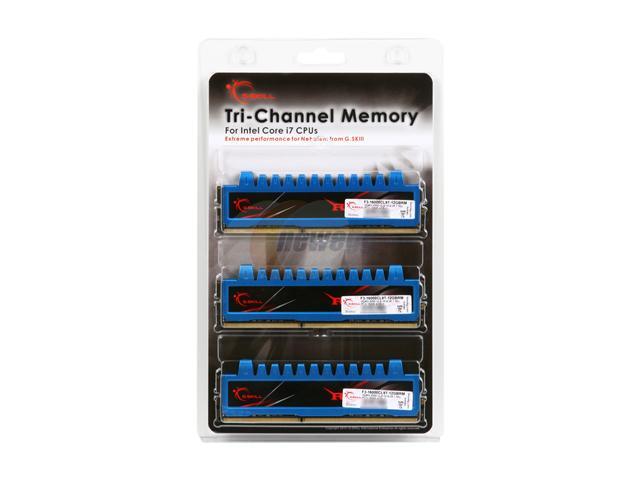 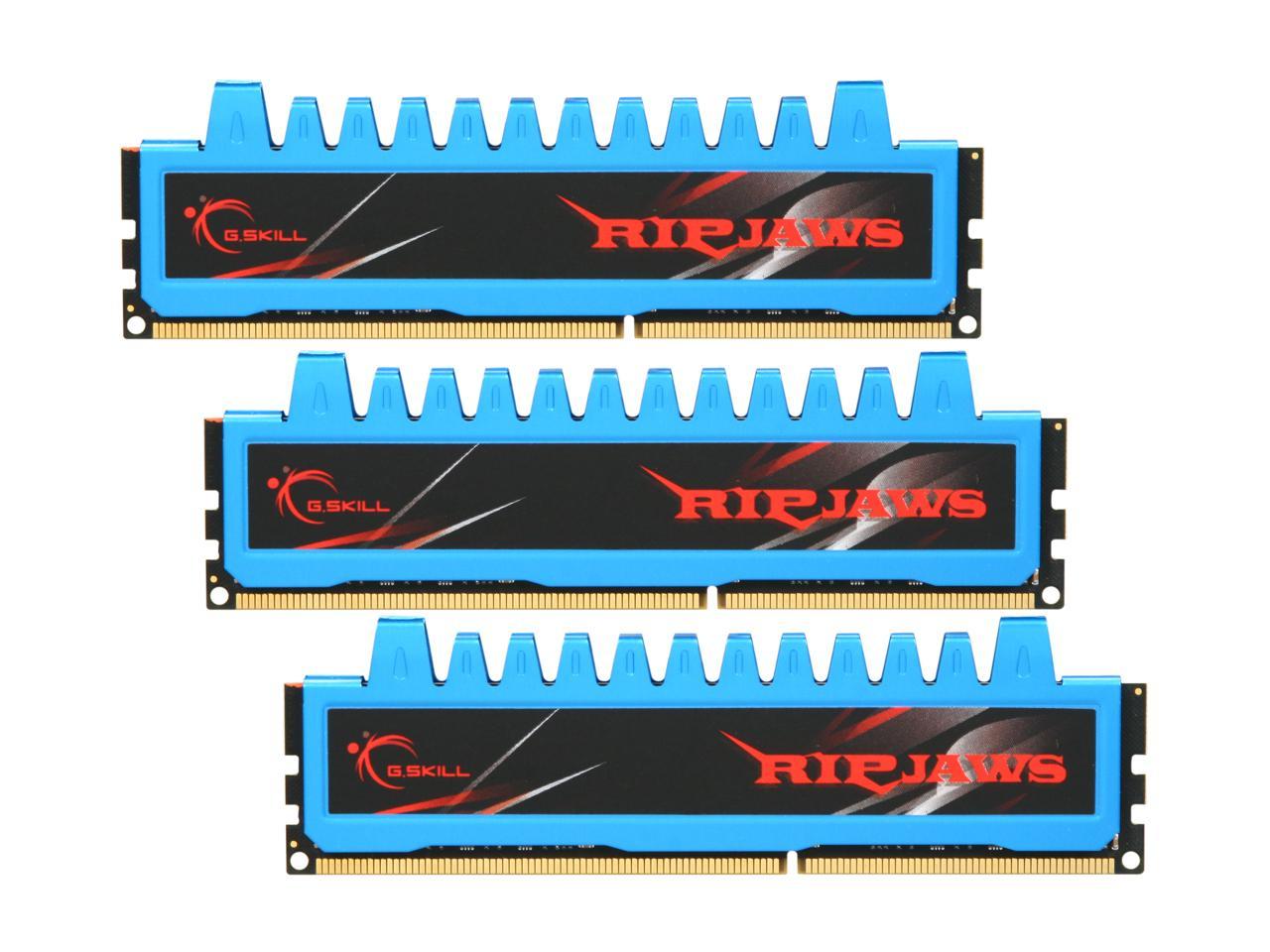 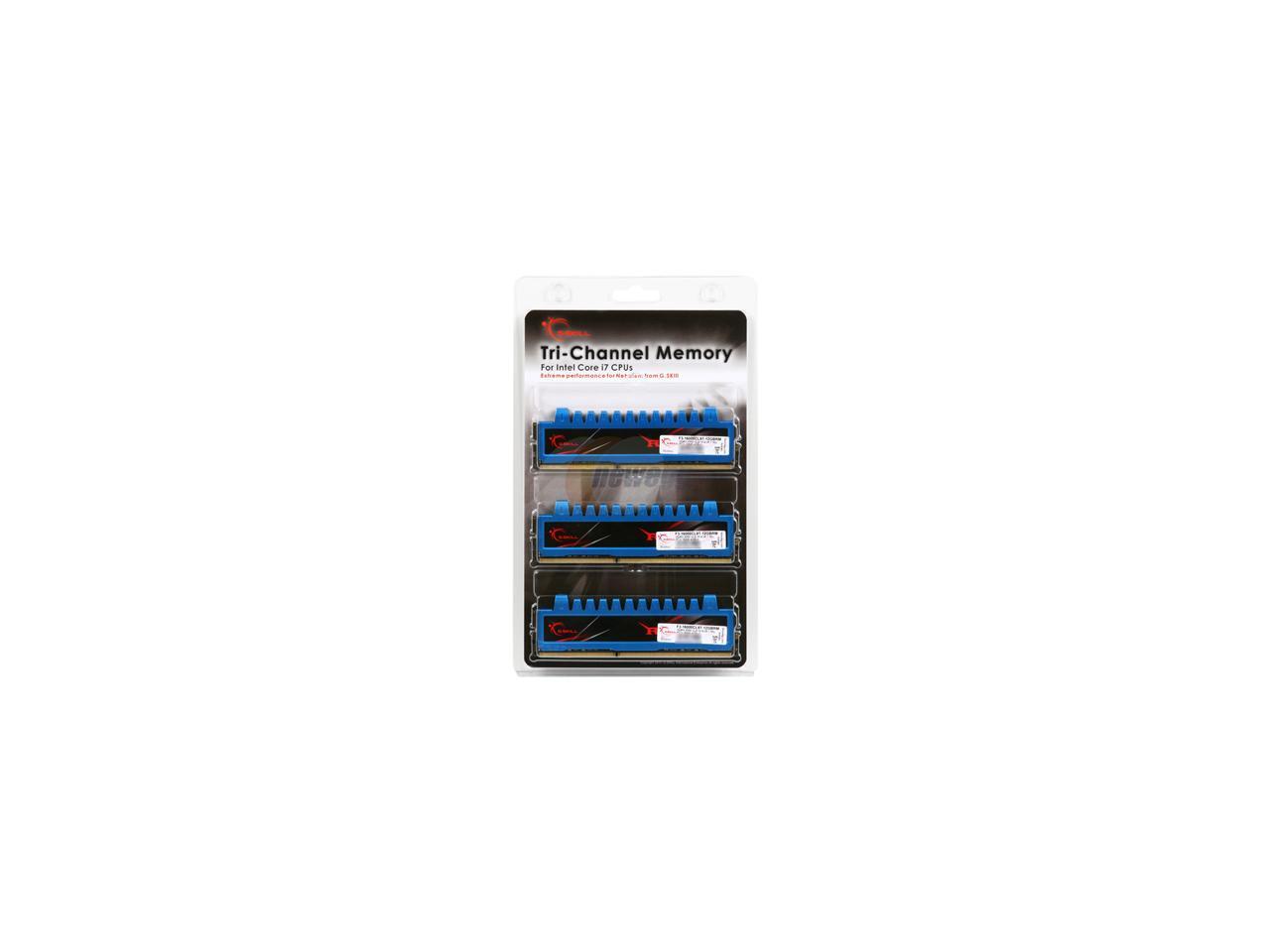 Cons: * Doesn't explicitly list the ASUS Rampage III series on the qualified MB list and vice versa. * Slower timings than other lower capacity DDR3 2000 kits * Using XMP it raises the QPI/DRAM voltage to 1.6V (up from 1.35V), which the MB flags as a bit high (however further research indicates probably note).

Overall Review: I installed this memory on an ASUS Rampage III Formula with an i7 950 CPU. I set it to XMP overclock DDR3 2000 and the board adjusted everything including DRAM multiplier, DRAM timings, bclck, voltages, uncore freq, QPI freq. This actually overclocked the CPU slightly as well. Everything was perfectly stable, so I decided to tweak a bit more. I increased the bus speed to from 133 to 167 and changed the DRAM multiplier to keep the the rate at 2005 MHz. Then I adjusted the CPU multiplier to 23 to get a clock speed of 3841 MHz and upped the CPU voltage a smidgen. It's all perfectly stable running Memtest 86+ and OCCT, so with very little effort I've got a 25% overclock on the system.

Pros: This is real good stuff. I installed in an EVGA FTW3 running an i7 950, the board never had an issue with it and it runs like a charm. I have never tried to run it at 2000 but I once lowered the cpu’s multiplier and had it at 1864 without a problem. The first thing I did was disable the xmp profile (as most problems stem from those anyway) set the ratio to 2:8, upped the voltage to 1.65 and began to tighten the timings considerably – these easily went down to 6-6-6-18-2T at 1333. Overclocking with these is a dream. I was able to pass both prime95 and a 20-pass LinX test running with the ram at 1600 with 8-8-8-24-2T timings on the 2:8 ratio with the QPI at 200 (4.6 ghz); however, anything much above that it’s a Bsod regardless of the timings but it’s not the memory as it’s amazing to even get that far on an i7 with 12gb of memory (on air to boot).

Cons: None. They have been flawless. These are an overclocker’s dream. The key to real-world performance when it comes to memory is not based on clock speed alone, it’s getting the highest speed with the tightest timings and these do it effortlessly. The clock speed is there if you want it and timings are easily tightened if you don’t. I normally run these near 1600, but I got them as ddr3 2000 gives the sort of effortless headroom that native ddr3 1600 can’t. I have my system running 24/7 at 4.55ghz with the memory running 2:8, 8-8-8-24 @ 1584, which will convert an hour-long .avi to an ipod friendly .m4v in five and a half minutes. I’m in the midst of an internal debate of whether or not to sacrifice a little clock speed, get another set and go to 24gb as I do a great deal of media editing, video capture and transcoding, but I don’t want to mess with a good thing.

Cons: Not so far

Pros: Works as promised. Gives a broad range of capability, from the Intel i7 spec of 1066 up to module spec of 2000 (I did not try and go higher). As previously commented, you have the choice of going for clock speed or tight timings.

Cons: Requires above average overclocking skills. Initially booted at 1066MHz on my mobo; which required me to adjust the settings manually through the BIOS (or by using overclocking software). I use the module specs of 9-10-9-28 (9-9-9-24 is BSOD at DDR3-2000)

Pros: Very fast memory, and was recognized immediately by my ASRock X58 Extreme board. The W7 performance score is 7.9, but even more impressive is the memory benchmarks in Everest Ultimate. I have it at it rated timings & voltage (1.55v), and at 1T, running at 2030MHz. G.Skill is awesome memory! I couldn't ask for better performance!

Overall Review: I don't know if it's the memory or the board, but just becuase it works one place, does not guarantee working elsewhere even wiht the same vendor and chipset. The inability ot employ the basic XMP profile on the P6X58-WS yields the three egg review. The point of XMP is that it's suppose to JUST WORK. That is not the case here.

Manufacturer Response:
. Dear Customer We are sorry to hear you have slight issues. For DDR3-2000, you may need to raise QPI/DRAM Core Voltage to stabilize the memory. Each motherboard, CPU, and memory can slightly differ, so settings will not always be the same. Especially for the X58 platform, Intel only suggests DDR3-1333 CL9, so DDR3-2000 is not as simple as enabling the XMP Profile. The XMP Profile will automatically set DRAM Frequency, timings, and voltage, but other voltage tweaks may be required to stabilize the CPU. If you continue to have a problem, please contact our technical support department directly and they will be glad to assist you. Thank you GSKILL SUPPORT Quality and customer service are our top priorities. Tech Support Email: ustech@gskillusa.com RMA Dept Email: rma@gskillusa.com G.Skill Forum: http://www.gskill.us/forum/
Frank b.
Ownership: 1 day to 1 week
Verified Owner
TRIDENT IS BETTER12/24/2010 12:26:03 AM

Cons: I can only get it to run at 1600MHZ, i tried newer bios update, I tried every setting possible in the motherboard. I have an Asus Px58d-3 not the deluxe. I already had the trident 2 6 gb kits which sgkill techs advised me might not work together but they worked just fine with the xmp profile. there is a significant difference between 12gb at 1600mhz or 2000mhz. boot time is slower, startup is slower, games open slower.

Overall Review: Get the gskill trident, or corsair. more compatibile.

Manufacturer Response:
. Dear Customer We are sorry to hear you had issues configuring the memory. With any DDR3-2000 memory, it can be slightly difficult to set up. For most systems, "overclocking" is required to stabilize the system, so be aware before purchasing these kits. The key option to adjust is the QPI/DRAM Core Voltage. Intel default is 1.10V for DDR3-1333, so for any memory above this, you must raise this as well. Please read some X58 overclocking guides if you are unsure of what to do. Thank you GSKILL SUPPORT Quality and customer service are our top priorities. Tech Support Email: ustech@gskillusa.com RMA Dept Email: rma@gskillusa.com G.Skill Forum: http://www.gskill.us/forum/
Frank b.
Ownership: 1 week to 1 month
Verified Owner
DONT BUY IT12/27/2010 9:54:18 AM

Cons: stick with corsair no problems. only $10 - $20more. After a few emails to and from gskill tech support this is what they have to say after I explained none of their memory I bought works as triple channel and only dual channel and not at right speeds either. after much much tweaking, QUOTE: Dear customer, We are really sorry about that. It was our carelessness. We will improve our products quality. Thanks Otis Huang F.A.E G.SKILL International END QUOTE

Overall Review: After a few emails to and from gskill tech support this is what they have to say after I explained none of their memory I bought works as triple channel and only dual channel and not at right speeds either. after much much tweaking, QUOTE: Dear customer, We are really sorry about that. It was our carelessness. We will improve our products quality. Thanks Otis Huang F.A.E G.SKILL International END QUOTE

Manufacturer Response:
. Dear Customer We are sorry to hear you are unable to operate the memory to specifications. DDR3-2000 requires extensive tweaking and overclocking to be stable, so if you are unsure of how to do so, we advise using DDR3-1333 or DDR3-1600 as it is easier to configure. For overclocking assistance and such issues, please visit the Official G.Skill Forum. There are many users that can assist you, and everything is documented for clarity. Thank you GSKILL SUPPORT Quality and customer service are our top priorities. Tech Support Email: ustech@gskillusa.com RMA Dept Email: rma@gskillusa.com G.Skill Forum: http://www.gskill.us/forum/