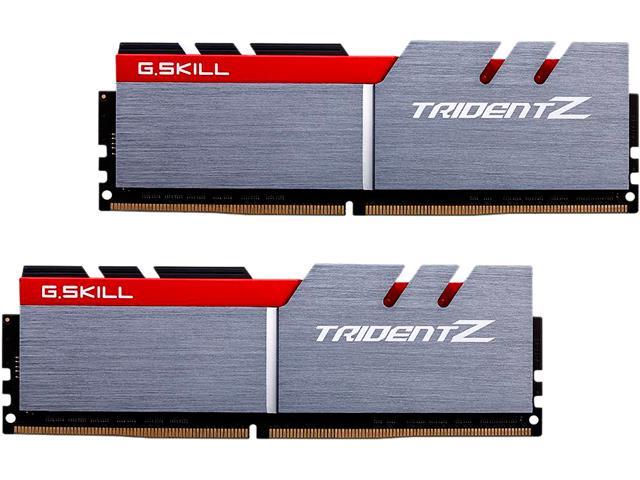 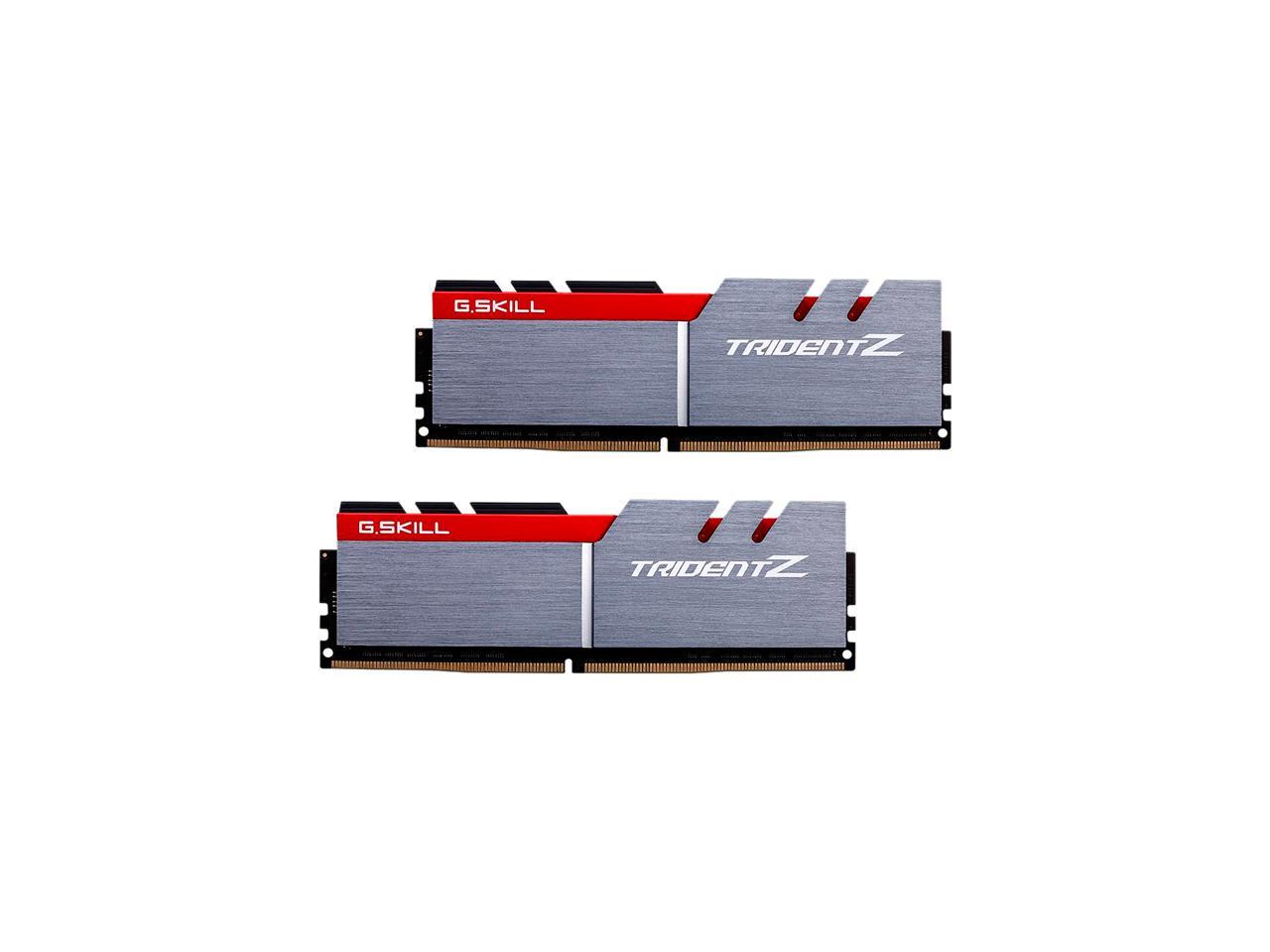 Pros: 16GB Dimms, CAS 14 latency at 3200Mhz... what more could you possibly ask for? have tested this ram with MemTest86 for 48 hours with 0 problems. took some tweaking to get it to run as advertised speeds, but this is not the rams fault. see below.

Cons: red trim strip is easily removable, but no other colors are available *yet*. i contacted G.Skill and they state they intend to have other colors available in the future, but no time frame or other details. ram actually looks very nice without the red trim any way.

Overall Review: DDR4 speeds above about 2400Mhz do not seem to have much support on X99 and Z170 platforms yet, and often require manual settings to function. I am running this on an MSI X99A SLI Plus board with 5960X CPU and it runs fine at bios defaults, but turning on XMP causes the system to be very unstable and it will almost instantly fail memtest86. Thought at first i had bad ram, DOA products can happen. after some testing, i noticed through overclocking tools that with XMP enabled, my ram voltage was still around the default 1.2V. even though XMP SHOULD raise this to the specified 1.35V. went back in the bios, and with XMP enabled, i manualy set each memory bank at 1.35V and now it is 100% stable. tested with several CPU/RAM benches, burn ins, and 48 hours of Memtest86. i have a friend who has the same problem with a 6700K on a Asus Z170 board, he also had to manual set the ram voltage to 1.35V to get it to work. rebooting with XMP enabled would cause the system to not even post. if you experience ANY strange behavior or problems. clear CMOS, go into the BIOS, and enable XMP, and before saving and exiting, manually set the ram voltage to 1.35V.

Pros: F4-3200C14D-16GTZ -No DOA for me, my guess is it's a minor problem (so few complaints) -Instantly recognized by my Gigabyte Z170X-Gaming 7. The XMP Profile 1 loaded up on first go but had some issues really. My motherboard tried to over volt it to 1.38v. Had to manually adjust that back down to ~1.35v (motherboard forced me to key in 1.36v, actually runs at 1.353v for me). Not surprising as this ram isn't on the supported list for this motherboard. -Insane latency times... Like sub 17.2ns with my stock 6700K! PassMark PerformanceTest 8 benchmarks -Reads (uncached) 21,000MBps -Reads (cached) 32,000MBps -Writes 18,000MBps -Threaded 40,000MBps -I like the color scheme, and the aggressive "heatsink". Really fits in with the Gigabyte G1 red, white, and black colors. Of note, one side of the ram is black, the other is the gorgeous dark stainless. -Passed 8 passes of Memtest86 at 3200Mhz with zero faults... took about 14 hours (16gb mind you). -Rock solid ram! -Limited Lifetime Warranty

Cons: -The price dropped after I purchased. No fault on the ram.... makes this a no brainier purchase! -Was a tight fit in my ram slot, not an issue so much as just be careful. -44mm tall with the heatsink sticking way up there. Check your clearance. -I did have to manually key in the timings into the Intel Extreme Tuning Utility. The bios loaded the XMP profile but it didn't seem to actually run those timings when inside the Intel XTU. It now runs at the specified 14, 14, 14, 34 at ~1.35v. Could just have been my motherboard.

Overall Review: I picked this ram over the G.skill 3400MHz with Cas 15. Couldn't be happier. Years and years of insane ram speeds are sure to follow. Everyone who has purchased this ram is either keeping it their secret, too busy picking their jaw off the floor from the benchmarks, or they're too busy enjoying the benefits of this blazing fast ram to write a review!

Pros: Maybe I got lucky but I am able to run the XMP settings on my Asus Crosshair VII Hero motherboard (Ryzen 2700X CPU) completely stable at 3200 MHz and CL 14. I'm quite happy with having 32GB of memory running at those settings.

Cons: None other than pricing.

Pros: - Look even better in person - fast 3200MHz - great timings CL14 Worked with my Gigabyte AX370-Gaming 5 mobo and Ryzen CPU out of the box. All I had to do was set the XMP profile and it's been working perfectly.

Cons: Heat spreaders a bit tall but I all had to do was move up my fan on the CPU cooler(Noctua NH-D15)

Overall Review: If you're thinking about building a Ryzen system I highly recommend this ram kit.

Pros: ASRock x370 Taichi recognized the XMP Profile and it posted well enough until I got a BSOD a couple of days after the install, I stress tested it, and it was not stable at default settings. I upped voltage a few ticks and stress tested overnight on Prime95, and I got no errors. I also ran OCCT tests, Valley Bench on a continuous loop, and no errors. The system has been rock solid.

Cons: This ram is known for 24/7 1.45v overclocks so a minuscule .0075 more voltage to get stability is not a big deal for the long term of ram, but I still wish it would have worked 100% at the default settings. Since I hear most people are getting 2966MHz on Ryzen 32GB sticks, so I should not be complaining too much.

Pros: 1) Awesome cas latency unoverclocker 3000 @ 14! with Dimm 1.34V 2) I was able to push them considerably higher with very little Dimm V 3) Once the XMP profile was on all you have to do bump up Dimm, VRM and VCSSA (I was able to get 1.76VRM at auto VCSSA 1.16 however recommend closer 1.2V) I am running at 1.78 and 1.185V respectively (That was before I overclocked the CPU) 4) Intelburn was ran at max memory 64gb at maximum for 10 times ~ 8.5hours passed no problem while I played foobar2000 for music in asio mode 5) Nice solid and heavy heatsinks

Cons: There wasnt any cons - except maybe the color scheme of red and black

Overall Review: ustech@gskillusa.com (Tel: 1-9095986860) if you have any issue getting them going. The email support was like 1hour anytime in the past. Corsair and Gskill are my 'go to' memory when I build hard core systems for myself Heck Gskill even replaced a memory module that was physically damage by the user, in my mind Gskill rocks.