FREE SHIPPING
Sold by: Newegg
Shipped by Newegg
Newegg’s gift-wrap service is the ideal solution for making your gift special! Select your item as a gift, then add your message. Your gift will also be discreet with no prices being included on the packing slip.
Price Alert
Add To ListFound on 158 wish lists 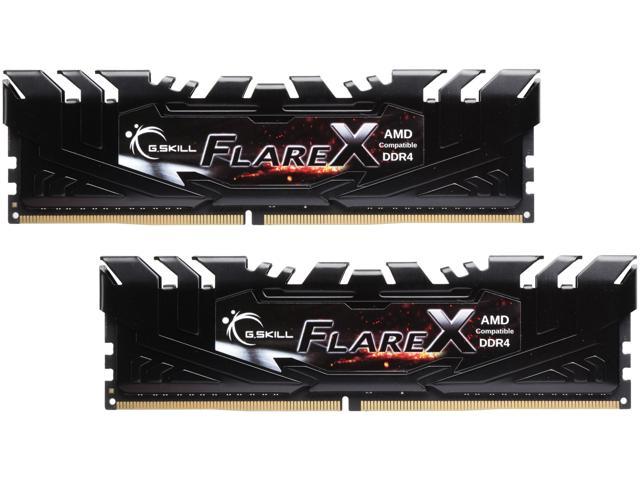 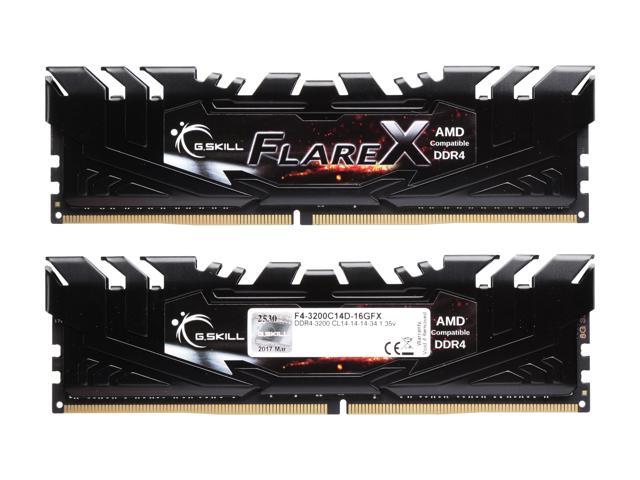 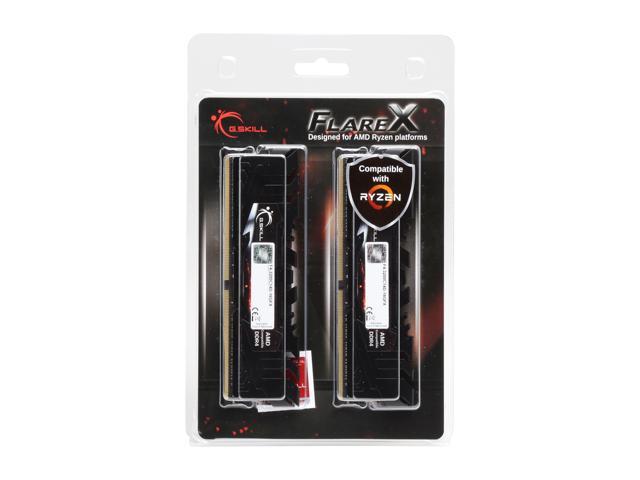 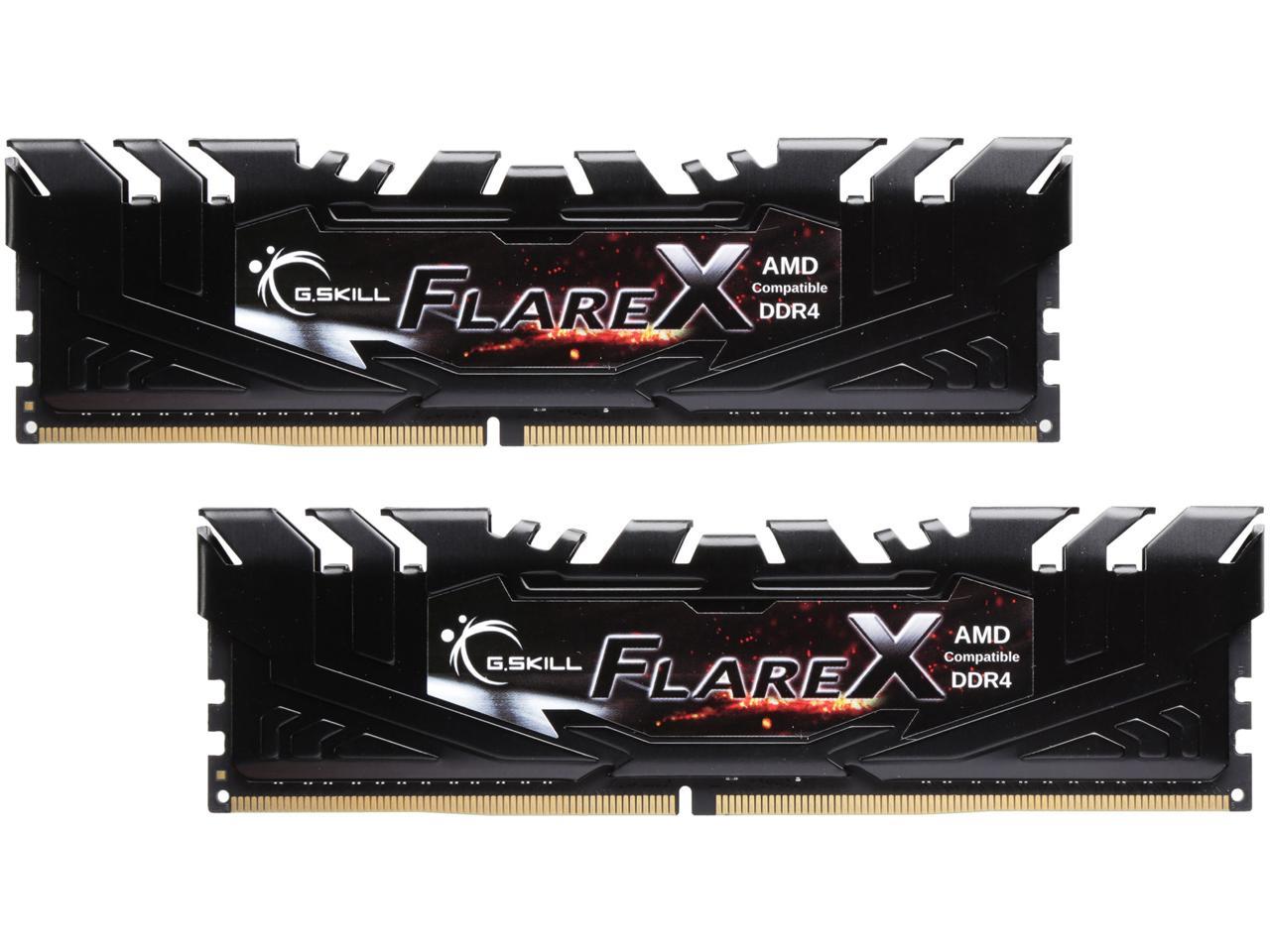 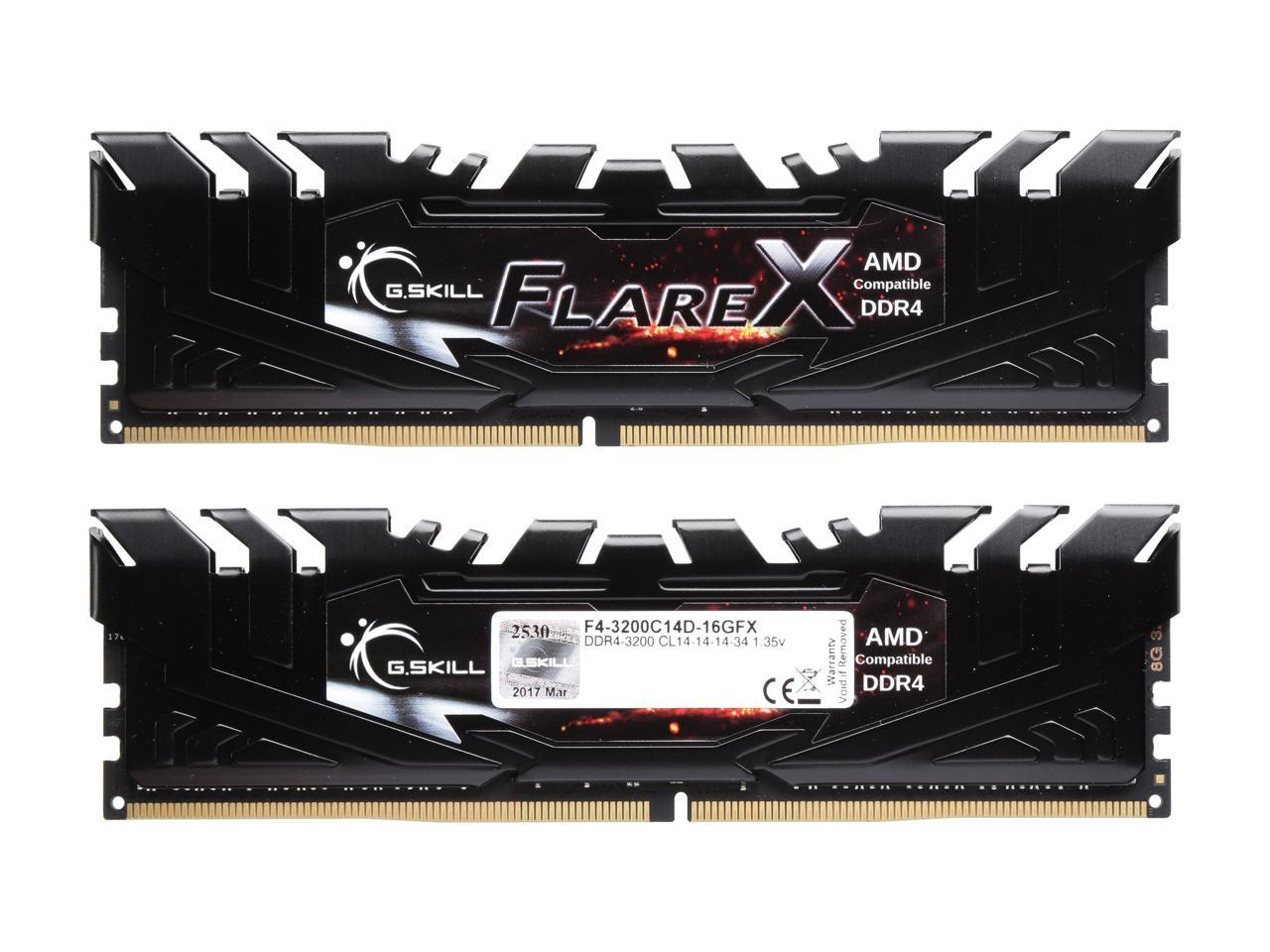 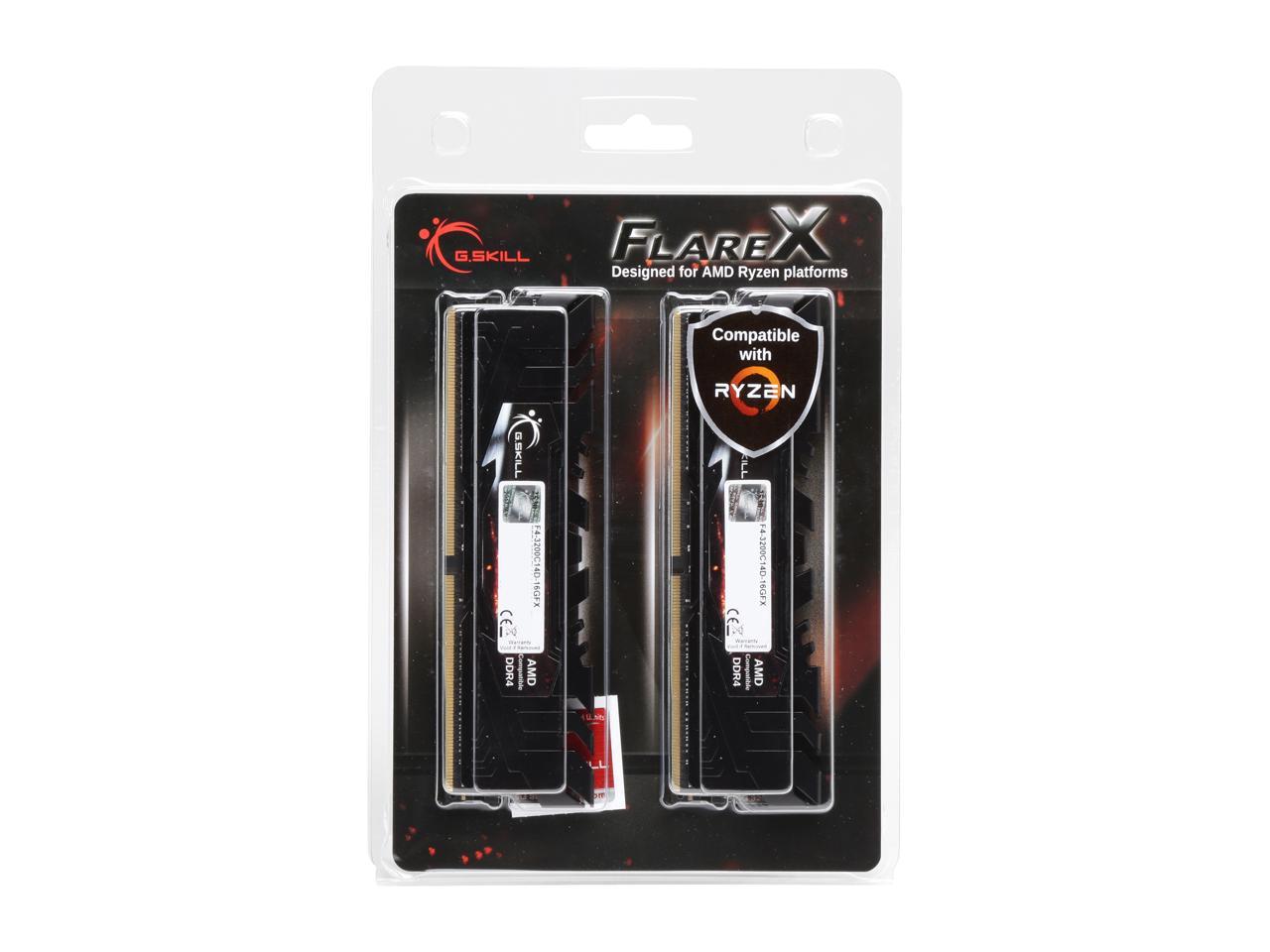 Returning from the ashes, the new AMD architecture features a completely different set of memory enhancements, requiring a new approach. The Flare X memory series is designed with a distinct characteristic to optimize compatibility with the latest AMD platform.

Available in memory speeds starting from DDR4-2133MHz, the Flare X series delivers high speed memory performance to efficiently transfer data for each of the cores on the AMD Ryzen processor.

Each and every single Flare X memory kit is tested under G.SKILL’s rigorous testing process to ensure the best performance, compatibility and stability on your AMD system.

Cons: Not necessarily a con, but something to be aware of... Dual Rank memory is a little different than Single Rank when it comes to dialing up clock speeds & tightening timings. Voltages you used to use may not be enough in this case. Don't be surprised, just find the balance between voltage and speed and move on. Read my full review for my experience.

Overall Review: Rock solid stable RAM. I've also used their 16gb Flare-X b-die kit... which also was rock solid stable. It's being run on a Gigabyte x470 gaming 7 rev 1.1 motherboard with a 3700x processor cooled by a Noctua NH-D15 single-fan. Was able to get it to 3400mhz with 14-14-14-28-42-1T-GDM OFF w/ subtimings REALLY tight... with only 1.41v... SOC voltage at 1.1v. Passed four passes of MemTest 86, 6000% RAMTEST, and Prime95. Most importantly - Battlefield V didn't crash it either - HAHA (seriously though... that game puts a ton of pressure on the system - it will "help" find instability). My case is set up for cooling, so it never gets over 37*C at that voltage under sustained load. Being dual-rank, it's not as easy to dial it up to 3600mhz/3800mhz... it often requires increasing processor's SOC voltage even further, which I've chosen not to do. My previous single-rank 16gb kit went 3600mhz 1.45v and 1.1v SOC... but this one throws CPU errors at those same voltages. That's fine though... 3400mhz with ultra tight timings is really good and this kit actually gets me better scores at 3400mhz than my previous did at 3600mhz (with less RAM voltage required). Gets me over 5000pts on cinebench R20 consistently (no overclocking for the processor... not even PBO... I just leave it on AUTO and let it do it's thing). FPS in games is stable and frametimes are consistent (more-so than with the 16gb kit... not sure if it's because of 32gb -or- because of being dual rank -or- both). Overall - another A+ home run from G.Skill. THANK YOU for continuing to make B-Die products for us enthusiasts!

Pros: The G.Skill Flare X (2x8GB) F4-3200C14D-16GFX ddr4 ram was easy to install and setup to get the rated 3200 speed. A few days later started having error code pop ups and reboots. I ran windows 10 memory diagonistics. 1st pass ok, 2nd pass at 75% detected problem. I swapped the ram sticks and booted into default 2400. Ran chkdsk on c:, ran sfc scannow which found corrupted files and could not repair some. Did repair of wim file, ran dism to restore health. Ran sfc /scannow again, this time it found and repaired/ replaced corrupted files. shut down set ram to 2933 speed booted and ran memory diagnostics, all is ok. Rebooted to bios and set memory to xmp file 2, rebooted and ram is running at 3200 speed. Ran memory diagonistics test and all is running fine. I added all this information because I know a lot of people run into simular problems with memory speed and it is not always the fault of the ram. In my case the memory diagnostics said it detected ram errors in 2nd pass, but after performing all the operations as I did above, the memory diagnostics shows the ram to be in perfect condition running at 3200 speed cl14. So before going to the trouble and delays of returning ram as bad, be sure to check out things as well as you can. The G.SKILL Flare X Series 16GB (2 x 8GB) F4-3200C14D-16GFX DDR4 3200 RAM is fantastic ram. I hope this little review can help some of you.

Cons: I have no cons to report for this product.

Overall Review: Highly recommended, I've been purchasing G.Skill ram for 8+ years now and they've always given me a great product. This kit of DDR4 does not disappoint. Qualifications: 15+ years in the IT field ranging from hardware to software - tearing apart PC's since the 90s with my first Intel 150MHz

Pros: I setup the memory settings per the rating of the RAM and it works just great at 3200 on my ASUS Prime X370 Pro.

Overall Review: I highly recommend this product to people who want 3200 RAM speeds with their new Ryzen system.

Pros: -This is the most popular and high-speed DDR4 RAM for Ryzen builds - highly reviewed and good specs makes for an easy buy. -Discreet and out of the way from an air cooler (CM Hyper 212X on an MSI Gaming Pro - not the carbon). -Enabled the XMP through the bios, detected the 3200 and advertised timings immediately. -Computer boots insanely fast -Looks pretty cool, those black fins are cold-to-the-touch metal

Overall Review: -I upgraded to these after my other set of G.SKill dimm's went bad, this was the best RAM I could find that would function in my build.

Pros: Tested to perform at the stated speed with x399 boards No ridiculous LEDs or other nonsense Minimal packaging

Cons: A bit pricey, but you don't build a Threadripper machine if price is a major factor

Overall Review: I'm not really an overclocker. I just want to get my work done and not play with hardware settings forever. My first choice of RAM required a lot of tinkering in the BIOS and was never quite stable at 2933. The G.Skill sticks required only one BIOS setting - changing the multiple to produce a speed of 2933 and accepting the auto timings and voltage. It has been rock solid running heavy loads under Linux.

Pros: This kit is stable at 3467Mhz at 1.4v on an Asus Crosshair VI Hero motherboard. I've paired it with an R7 1700 3.9-4.1Ghz. Performance is Phenomenal and has a massively positive impact to gaming performance in particular.

Overall Review: If you have, or are buying an AM4 Ryzen CPU, BUY THIS RAM. You'll be glad you did.

Pros: -XMP profile boosts this up to 3200 with no problem -Low latency indeed

Overall Review: It says for x370/b350, but this is fine for your X570 board/processors as well