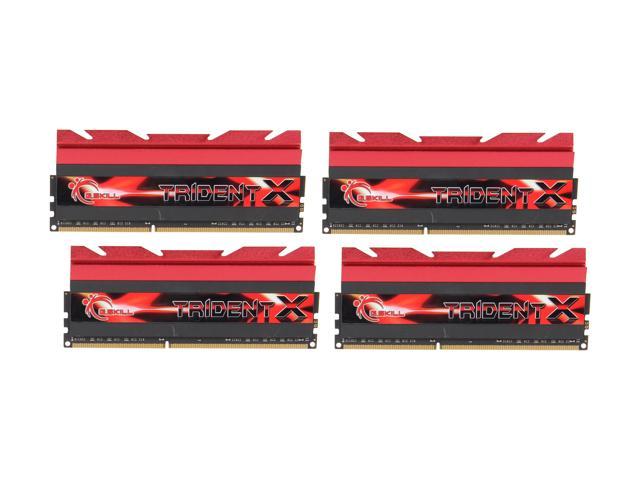 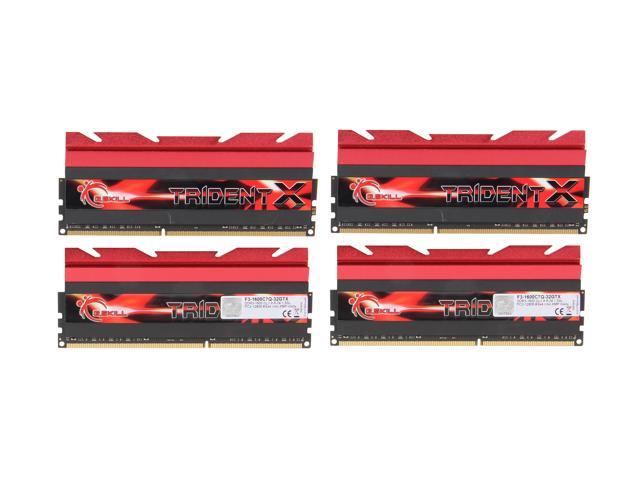 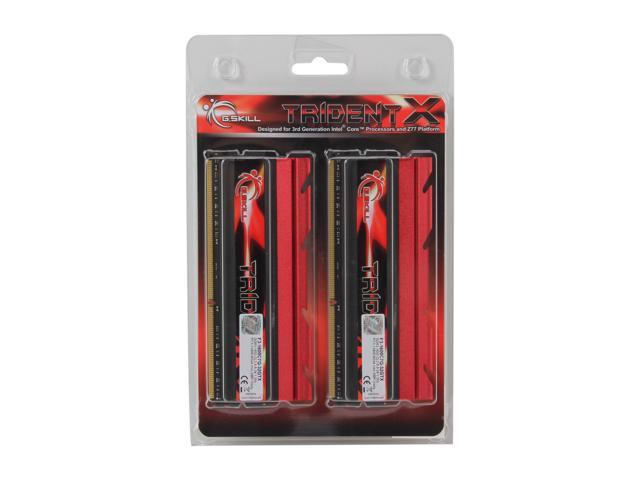 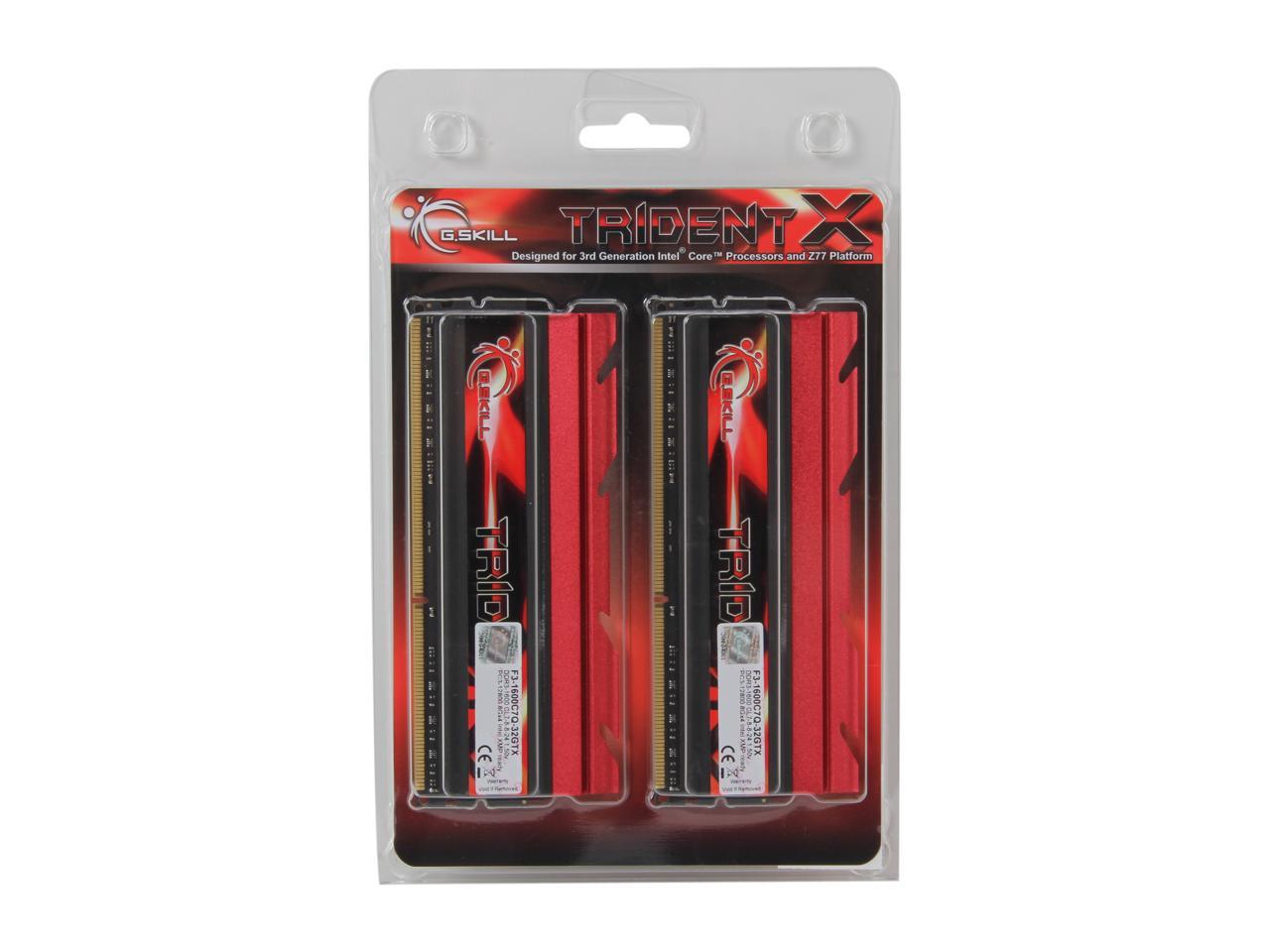 All G.SKILL memory products come with a lifetime warranty and the G.SKILL technical team is always ready to provide consumers with complete technical support via online forums, telephone, and email.

Pros: Excellent memory! Low latency. Fast and stable. Responds well to overclocking. Runs very cool. Has Intel XMP support. Solid performer. I am very satisfied with this memory. If you're in the market for high end memory, definitely consider the Trident X series. It lives up to its claims.

Pros: Its fast, and it works. It works exactly as designed. No errors, no problems. And it comes with a lifetime warranty.

Cons: The ram came with "cooling" fins witch interfered with my Noctua cooler. Fortunately, G.SKILL has allowed these to be removed by removing a simple screw, so not a big deal. More of a PRO than a CON really...

Overall Review: Love this RAM. I have 32GB of it!!

Pros: I have never been disappointed using G-Skill Trident or G-Skill ripjaw memory....I use it in all my builds, and I always buy it from Newegg. Set up was easy ...just load and powerup... the memory and cpu will find the best settings.

Pros: It is a great kit with very tight latency setting. But...

Cons: One of the DIMMs does not boot and mobo gives post code 55 that means dram failure. That happens and I am sure no problem with RMA. However I have brought the kit back home country Turkey with me. now I dont know how to get replacement without high shipment costs.

1 out of 1 people found this review helpful. Did you?
Manufacturer Response:
. Dear Customer We will be glad to help with this issue. Please complete the RMA procedure online, and we will direct you to the nearest G.Skill RMA facility in your area. This is a high performance, high capacity memory kit that will work extremely well in your system. The G.Skill Trident X Series is the best DDR3 RAM on the market. Keep in mind all G.Skill memory kits are backed by a manufacturer lifetime warranty, so if you can't exchange it at this time, you can do it later as well. Visit the G.Skill website for complete RMA procedure. With G.Skill, we will make sure you have good working RAM for life. Thank you GSKILL SUPPORT Quality and customer service are our top priorities. Tech Support Email: ustech@gskillusa.com RMA Dept Email: rma@gskillusa.com G.Skill Forum: http://www.gskill.us/forum/

Pros: Excellent performance on Socket 2011, and easy to config, just remember to use the XMP profile. A lot of people don't seem to realize that they need to just set the XMP profile to get full performance out of it. Memory isn't plug and play unless you want to deal with the "slow but easy and stable" OEM stuff, but the config isn't hard at all. It just requires staying informed.

Cons: The heatsinks are a little tall and can interfere with certain coolers. My experiences with this memory are that it doesn't even need these cooler. They're barely warm to the touch while running full bore. Are they really needed? I prefer to just use a close loop water cooler to avoid issues like this.

Overall Review: These are the same modules that are used in other DDR3-2133 modules, but are tuned for lower latency instead. They can be overclocked, but it will raise the latency. It doesn't overclock to 2133 as well as some others because of this low latency tuning. This is more geared toward being able to load up a full 64GB on a Socket 2011 board without having crippling latency, rather than flat out speed. Think light sports pickup vs sports car. A couple sets like this will give you high end gaming performance while giving you enough memory to run all those VMs or high res Photoshop or video editing while not gaming. It does the job well.

Cons: I have the kit a week ago and brought them back to my home country Turkey. put them on my pc and got code 55 on my mobo that means DRAM failure. when I have tested every 4 DIMMs, one didnot work whatever I have did. Now I dont know how to replace them as shipment will cost almost half of the product. It is very annoying.

Did you find this review helpful?
Manufacturer Response:
. Dear Customer Glad to hear you got the RAM at a great price. The G.Skill Trident X series is definitely one of the best values available. You get the top quality product, at the best price, with the best service and support. It is strange a module is not working properly, but don't worry, there are many RMA facilities around the world other than USA that you may ship to for exchange. Complete the G.Skill RMA procedure online and you will be directed to your nearest location. Visit the G.Skill website for complete RMA procedure. For any further questions or concerns, please feel free to contact us directly. Thank you GSKILL SUPPORT Quality and customer service are our top priorities. Tech Support Email: ustech@gskillusa.com RMA Dept Email: rma@gskillusa.com G.Skill Forum: http://www.gskill.us/forum/