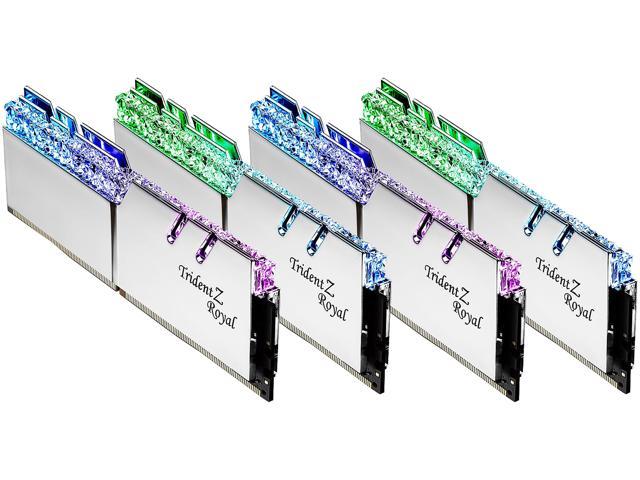 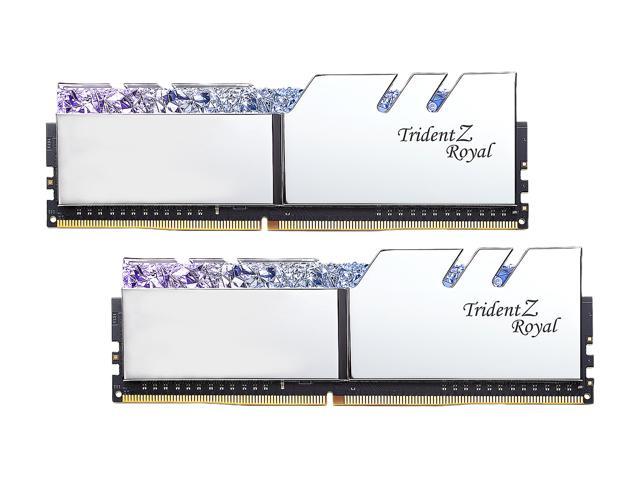 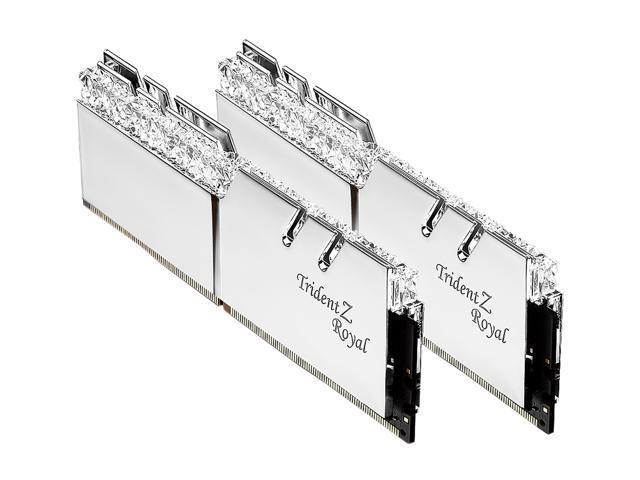 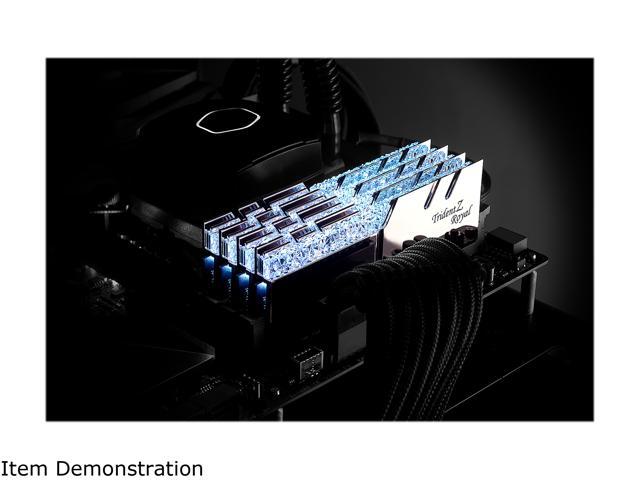 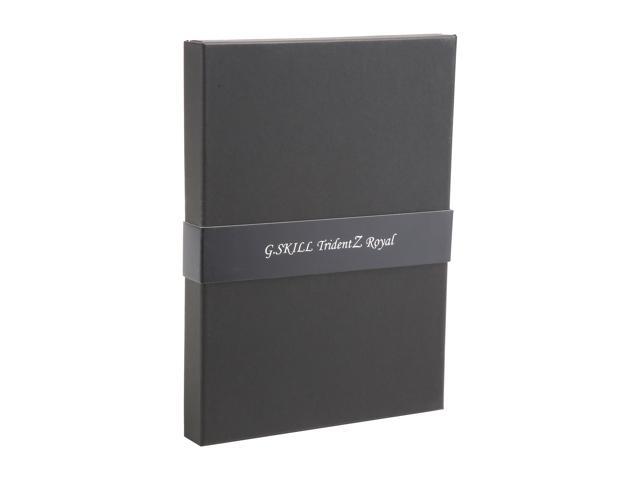 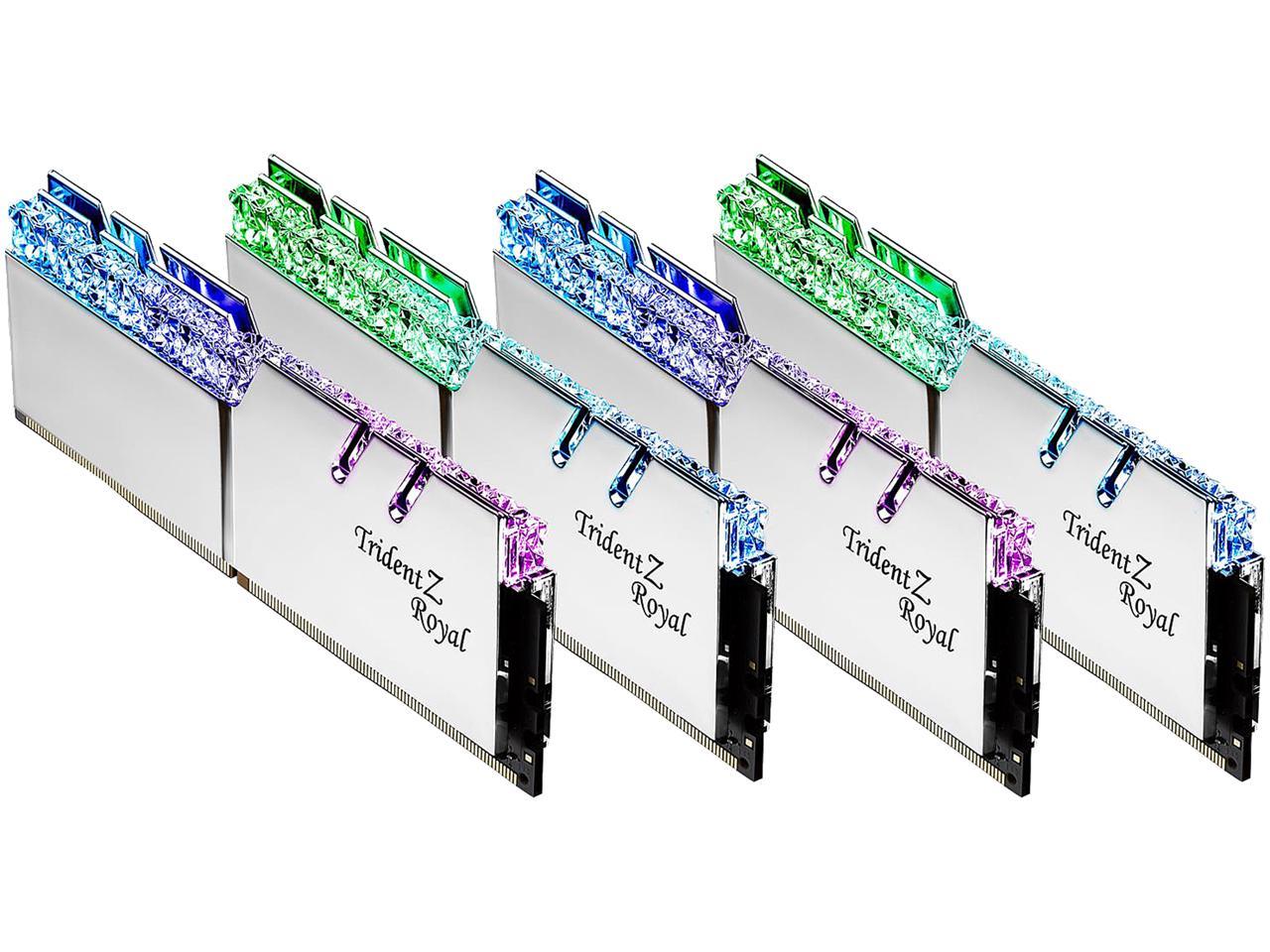 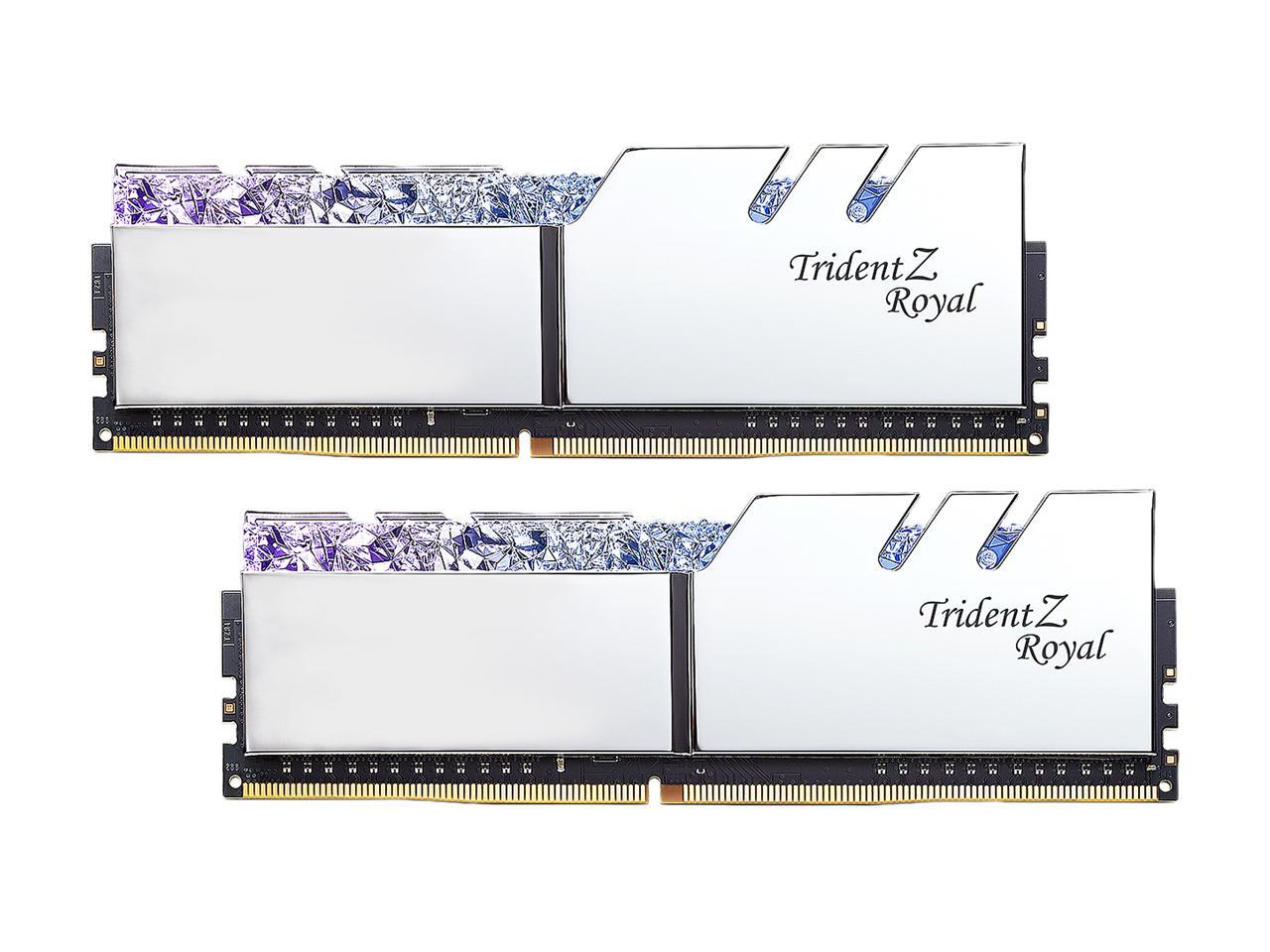 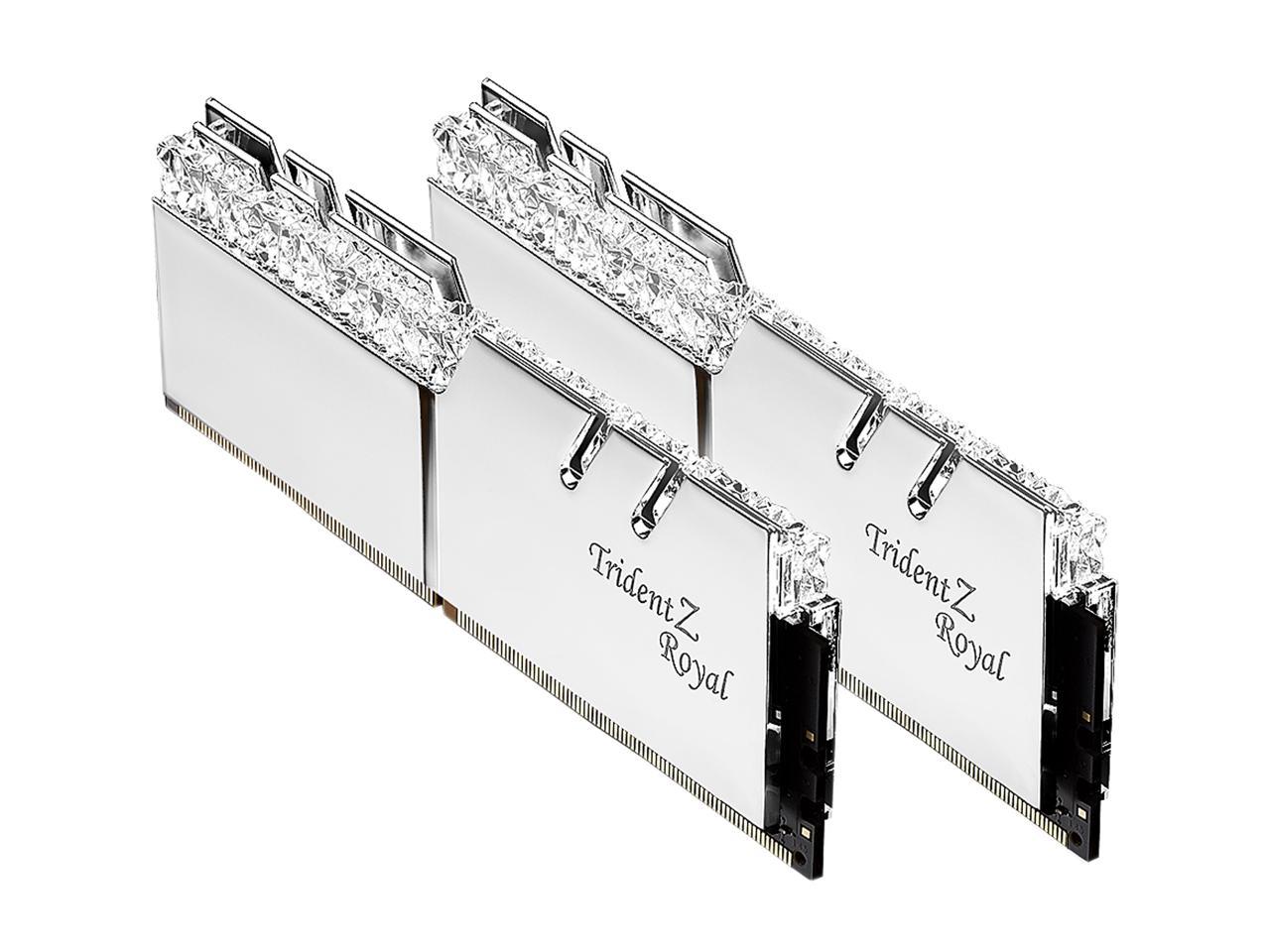 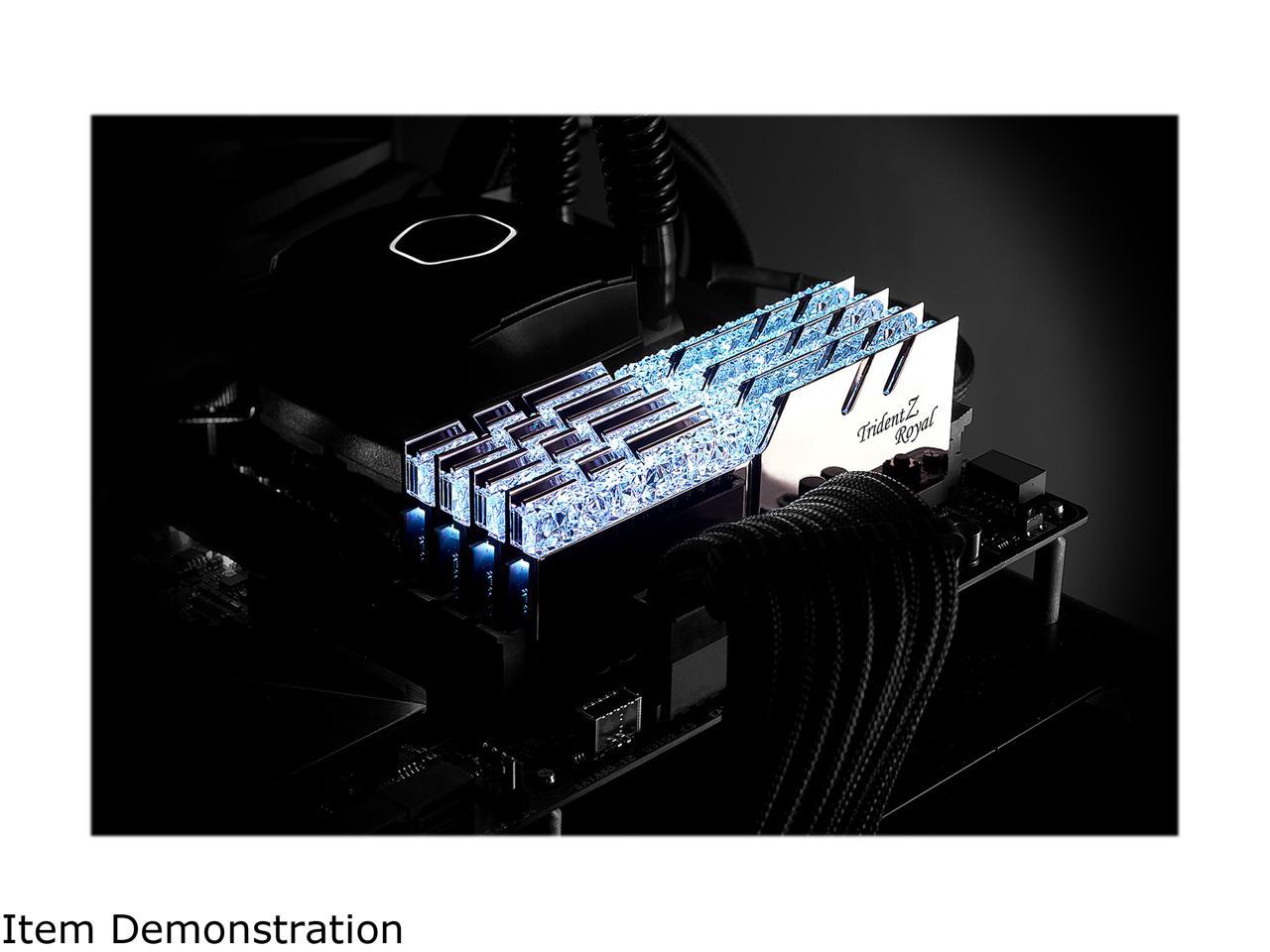 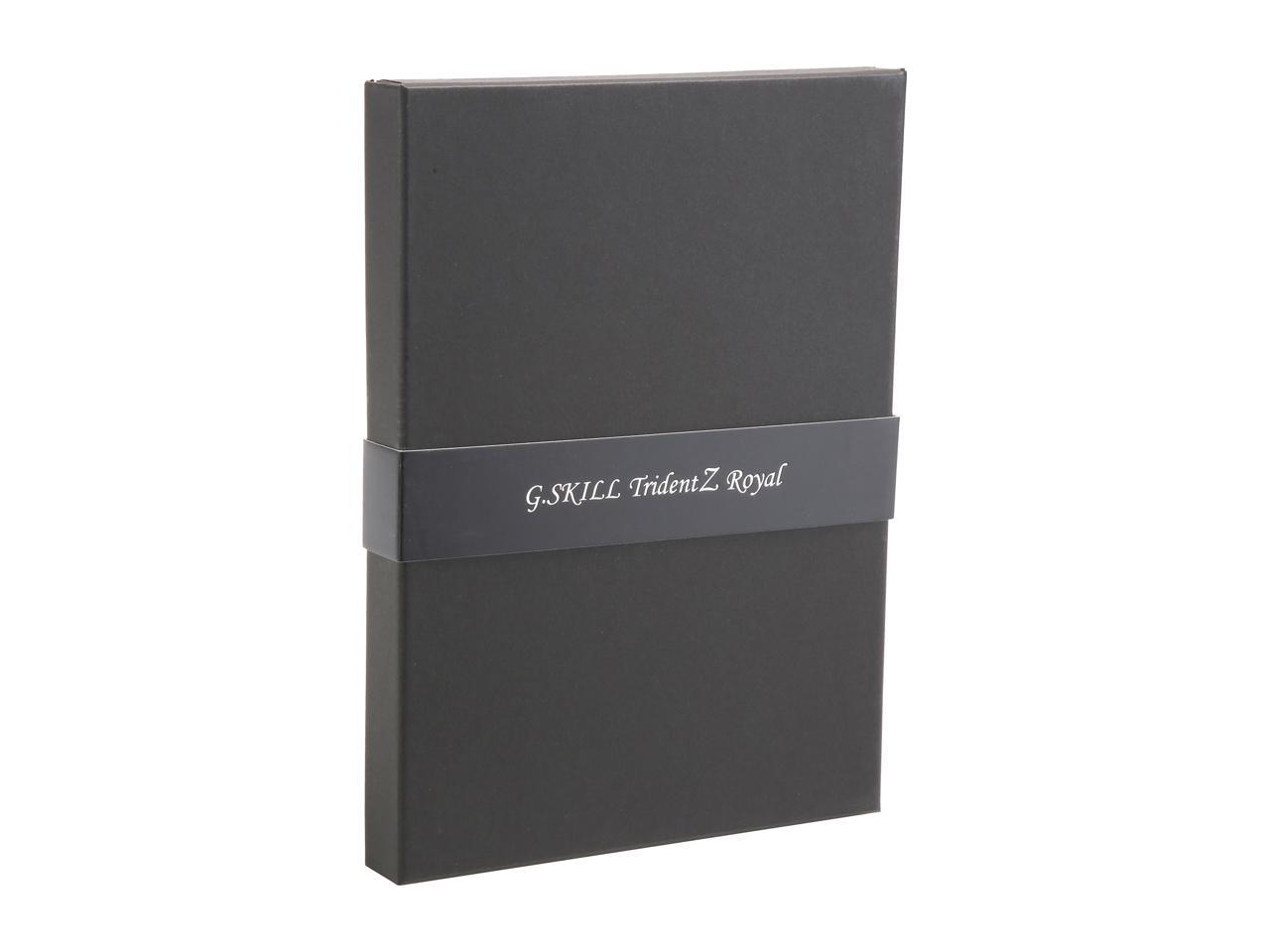 Engineered with 8 controllable RGB zones and tested for reliability, compatibility, and performance across a wide range of motherboards, Trident Z Royal is the ultimate high-performance RGB memory.

Uniquely designed to disperse and refract light from the 8 RGB LED zones on each module, providing a magnificent lighting display into your PC case.

The Trident Z Royal lighting control software offers over a dozen lighting effects and management of up to 4 lighting profiles, as well as the ability to control each module individually or in sync, so you can customize your own color scheme to the fullest extent. Let imagination be your muse.

Each Trident Z Royal module is built with hand-screened memory ICs on a custom 10-layer PCB to ensure the best signal integrity for fast overclock performance.

Regardless of Intel or AMD platforms, each Trident Z Royal memory kit is tested for compatibility and reliability, so you can build a truly customized PC with a wide range of motherboards.

Pros: Hits its rated speed 4000, plenty bright almost too much so but the lowest setting was about low enough for when it seems over powering bright.

Cons: Did not get the Silver color that I ordered ( Gold instead)

3 out of 3 people found this review helpful. Did you?
Manufacturer Response:
. Hi Mr. K Thank you for your G.Skill purchase and review. Good to hear the memory is working up to speed in your system. DDR4-4000 is an extreme frequency not any motherboard or CPU can support, however, as long as it is listed in the G.Skill QVL or RAM Configurator, you can expect outstanding results. With regards to color, if it is not correct, contact NewEgg directly and they can correct the order right away. For any questions or concerns, please feel free to contact us directly. Thank you for choosing G.SKILL Quality and customer service are our top priorities. To check or report a technical problem, please visit the Official G.Skill Technical Forum: http://www.gskill.us/forum Tech Support Email: ustech@gskillusa.com RMA Dept Email: rma@gskillusa.com
James B.
Ownership: more than 1 year
Verified Owner
I Like G.Skill9/3/2020 5:24:25 PM

Pros: -Memory works as listed. -Comes in a very nice box that made me feel like the ram was super protected -No issues so far since I bought them back in June of 2019. -Works at the listed speeds and voltage right out of the box. -Shinnnnyyyy -Got the color I ordered lol!

Cons: -When I put the ram into the motherboard while I had the motherboard out of the box ontop of its box, the ram went in super easy. However, when I was doing some troubleshooting once I had my rig together trying to get one of my ram to fit into the motherboard was a huge pain. I thought it was me just being stupid, but it almost seems the slot at the bottom doesn't give any wiggle room and you have to be right on point with it or you will just push against the motherboard while you try to insert it. Like I said though when I had the motherboard out of the case it was easy. -XMP profile can't be used when you have a PCIe x4 NVME SSD installed. I tried using it and it wouldn't boot. As soon as I went in and manually updated the MHZ to 4000, the voltage to 1.35, and the timings in the bios it booted up just fine. I use a Gigabyte Aorus Master motherboard. I don't know if its that or just because the PCIEx4 lane gets used up and makes the XMP profile not able to function. My bios is updated to the latest and all my drivers are up to date. I don't really care though since I have it working fine anyway.

Overall Review: -Even with the cons it's a easy 5 stars. You are getting 8.5 or whatever computations on ram with 4000. That's really reallllly goooooood. You pay for it for sure. I should be buying another set for 32gb total here sooner or later. -G.Skill just keeps surprising me in how well their stuff is made ever since they came out. I have their crazy cool mouse that you can adjust even the palm on and their mechanical keyboard. Love their stuff.

Overall Review: No need to spend more if you are only using xmp. I am using a i9 9900k on ROG maximus xi formula. Never encountered the not boot problem on xmp-1.

Overall Review: If you like the look the 4000c17 Royal kits these are some of the better bins going by other users experience and my own testing out various kits from 3200c14 to 4600c18 kits from various manufactures. Cheaper kits like the Team 4133 kit will get "close" timings and performance to these at a much lower price.

1 out of 1 people found this review helpful. Did you?
Manufacturer Response:
. Dear Customer We can surely help with this issue. Each G.Skill memory kit is guaranteed to operate at the rated specifications. If you have any problem achieving it, please let us know and we will be glad to help. Depending on the motherboard and CPU used, other factors may be involved in reaching this extreme frequency of DDR4-4000. In some cases the CPU IMC Voltage is slightly lacking and thus requires a manual increase to support the rated specifications of the memory kit. With the necessary value, it should allow the RAM to operate at XMP profile specifications. In any case, please let us know how it goes and if still having issues we an surely assist you and make sure the memory kit is operating as intended. Thank you for choosing G.SKILL Quality and customer service are our top priorities. To check or report a technical problem, please visit the Official G.Skill Technical Forum: http://www.gskill.us/forum Tech Support Email: ustech@gskillusa.com RMA Dept Email: rma@gskillusa.com
Shuhui L.
Ownership: 1 month to 1 year
Verified Owner
Decent9/9/2019 10:52:55 PM

Cons: It's not on MSI boards' QVL. I think G.Skill didn't send samples which made this model lack BIOS optimizations.