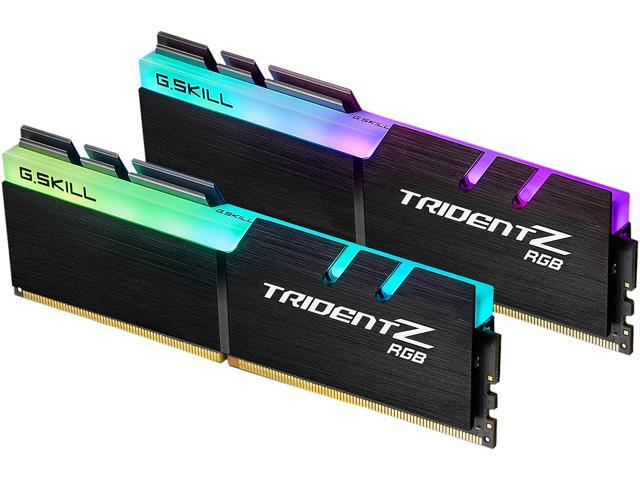 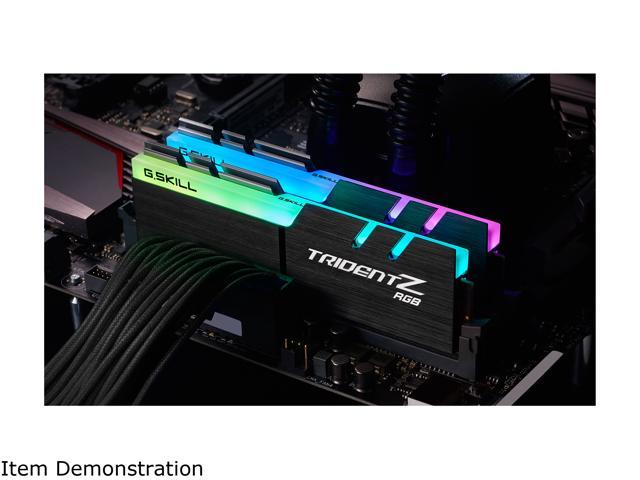 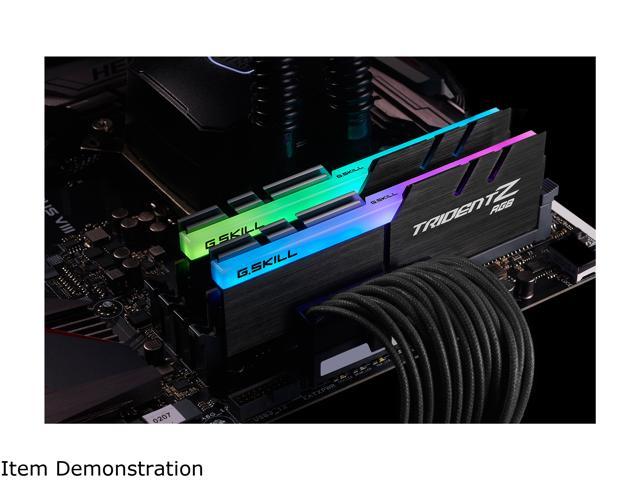 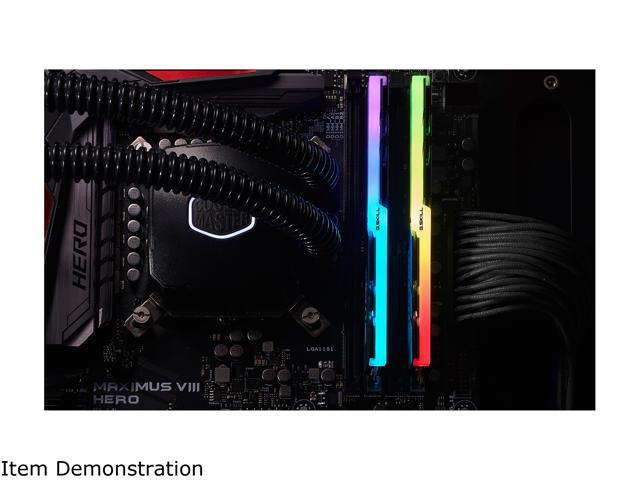 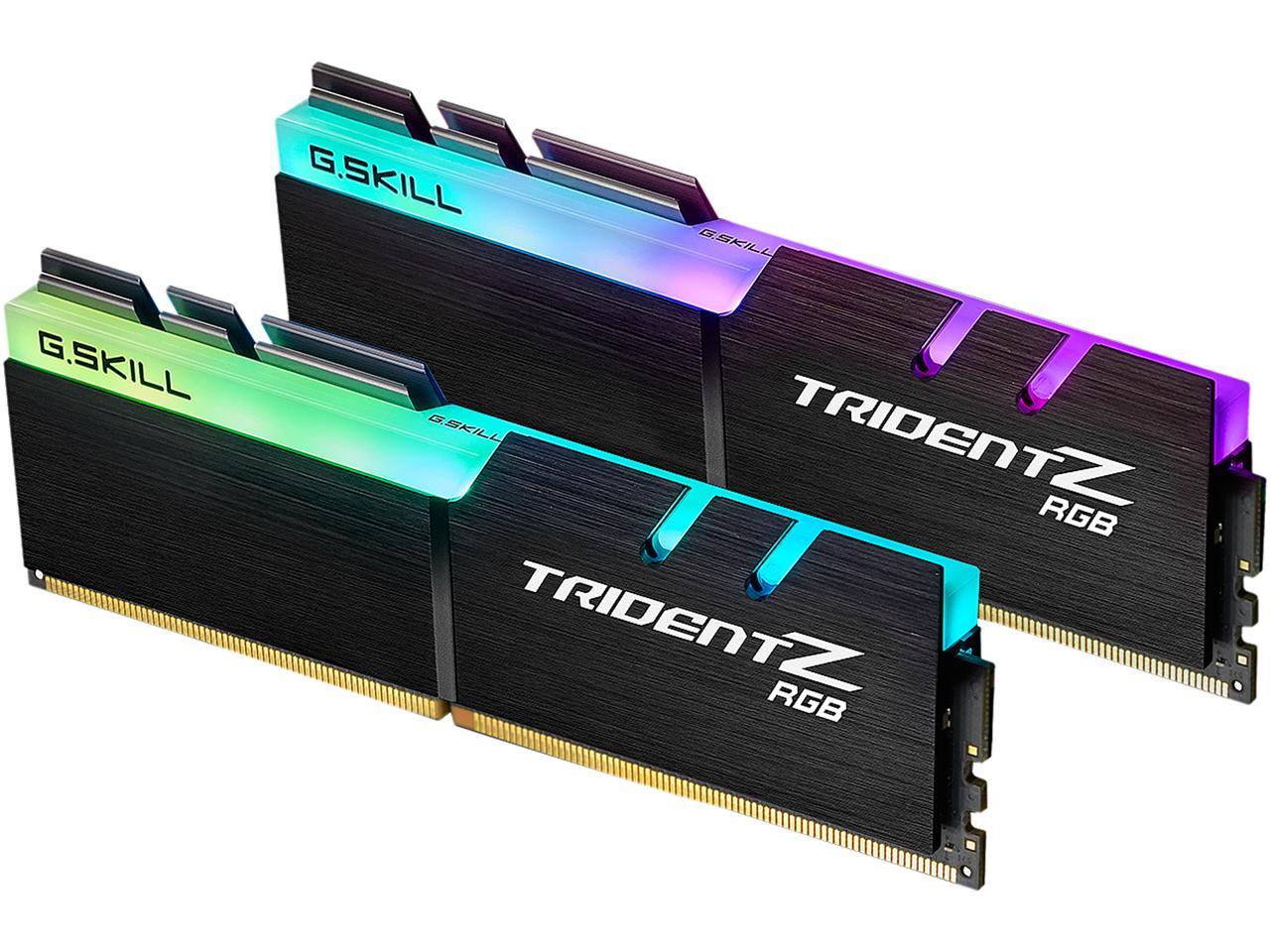 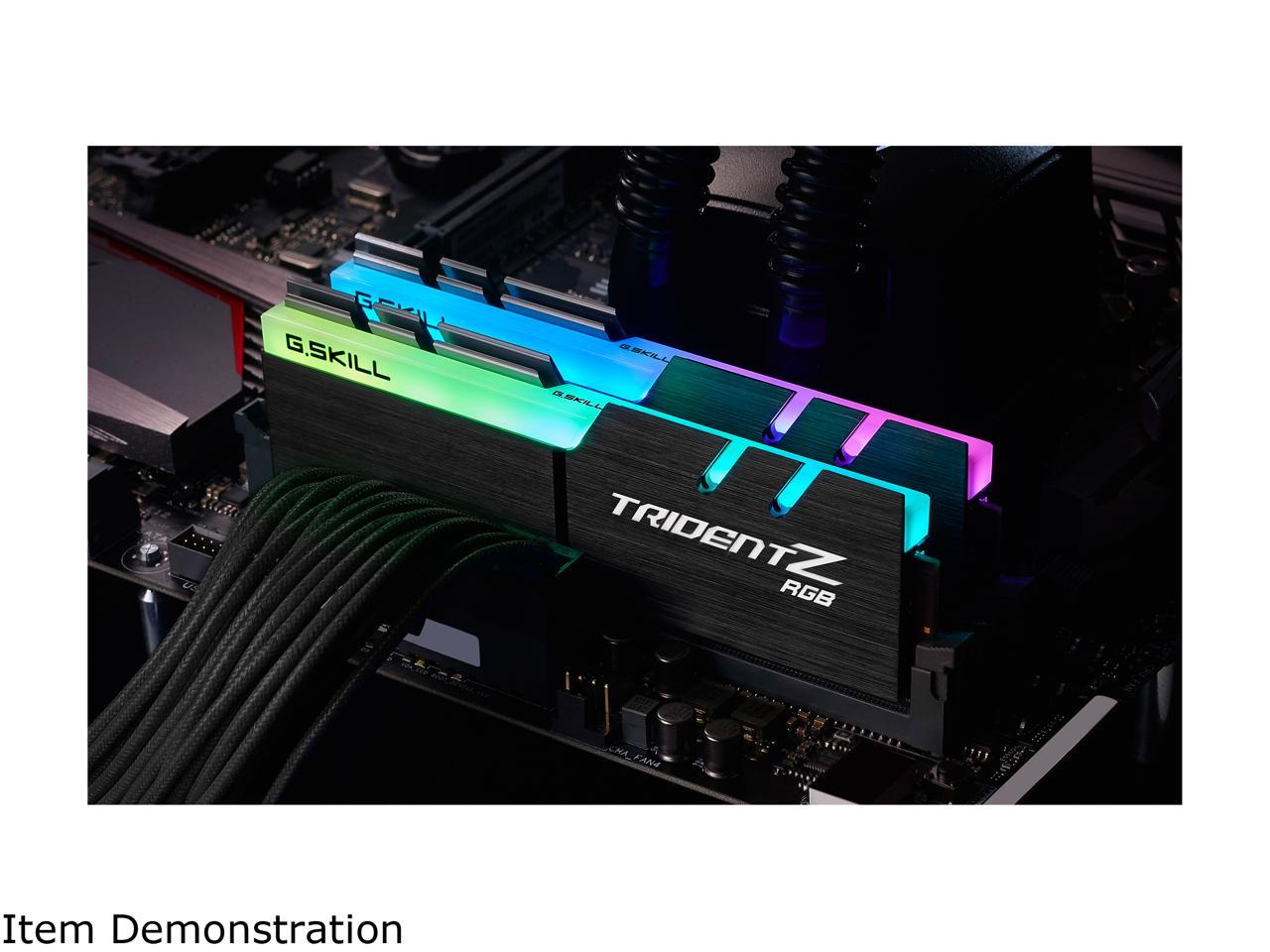 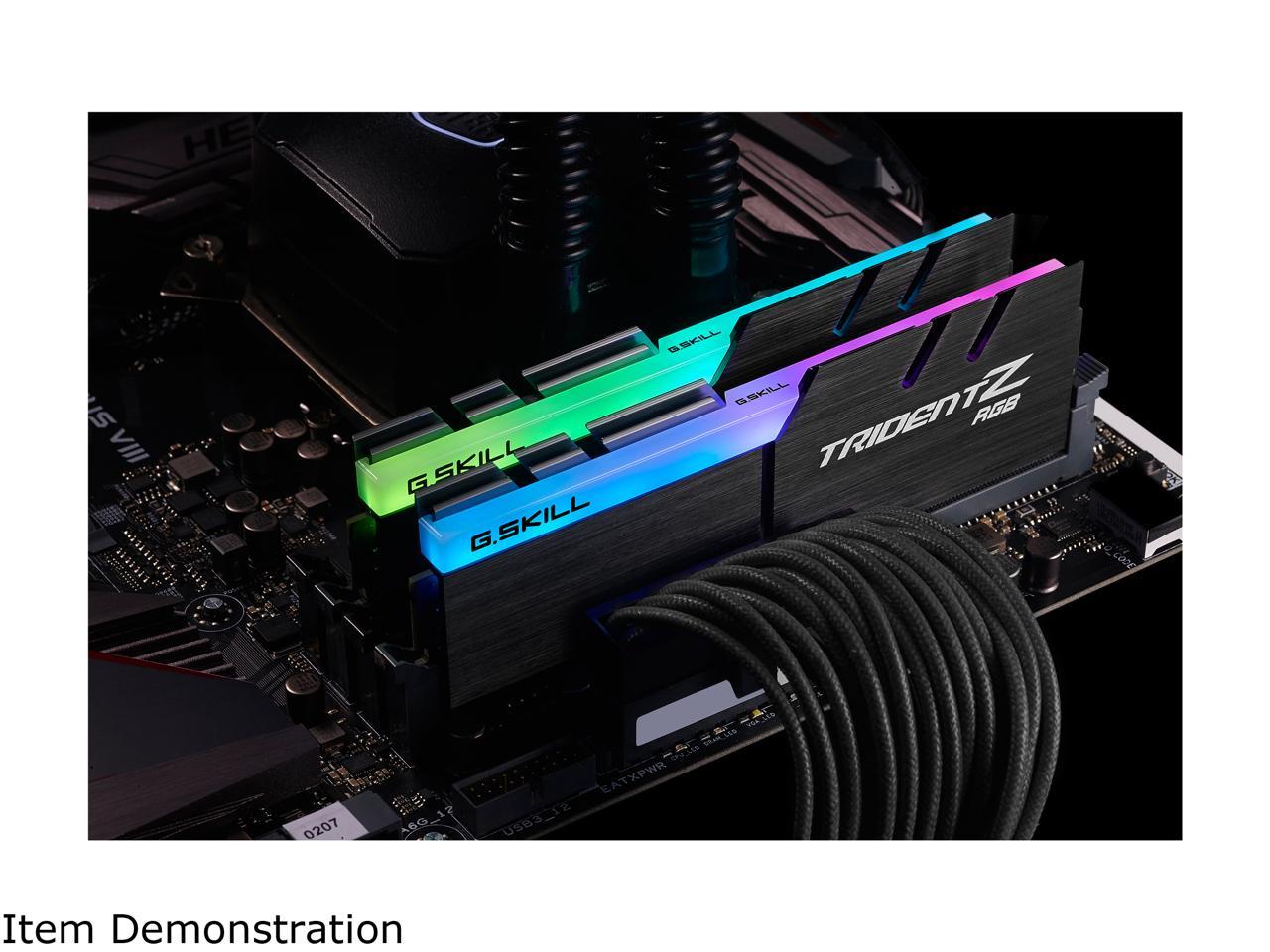 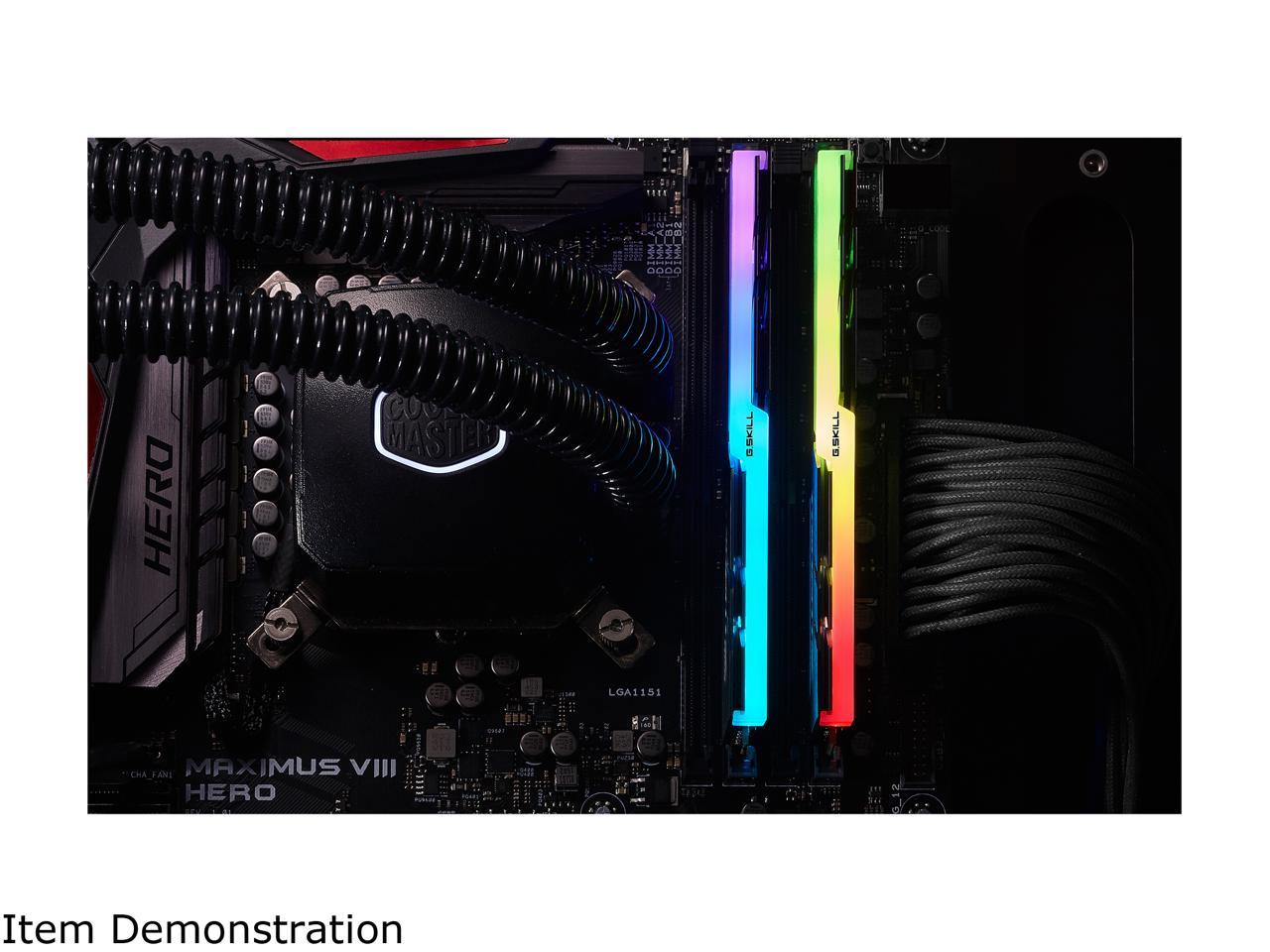 Trident Z RGB retains the iconic design element of the traditional Trident Z lineup - featuring luxurious hair-line finished aluminum heatspreaders and an aggressive fin design for highly efficient heat dissipation. The top of the heatsink has been exclusively engineered to mount a wider light diffuser for more extravagant lighting effects. Look no further for a memory that combines performance and beauty for building a stylish, modern PC!

Each memory kit contains specially screened ICs through G.SKILL's unparalleled selection process and a custom engineered ten-layer PCB offering maximum signal stability; and every single kit is rigorously tested for reliability, compatibility, and performance across a wide range of motherboards.

Create a one of a kind PC with the Trident Z RGB memory kit! The best thing about having RGB capabilities is the ability to choose the colors you want. Whether it's white on one day or green on the next, you can be sure these modules will look current and modern in any build.

Overall Review: First time buying RAM from G.Skill. I bought this to replace some CAS 17 memory that that was causing my system to BSOD. This RAM, fixed my issue, and now I have 32GB instead of 16GB, and on top of that I have more visible RGB in my case. Thanks G.Skill! #LifeSavingRAM

Pros: - Excellent stability at 4400 CL19 - 1st Gen Ryzen 1600 was able to get it up to 3333mhz @ 1.3V stable. That's actually a limitation of the CPU's memory controller NOT the Ram. g.skill customer service was actually impressed and called my results "outstanding with a Ryzen 1600". Honestly made me a little proud of myself. :) -3rd Gen Ryzen 5900X was able to get it up to 4400mhz @ 1.5V using an XMP Profile. I'm soooo happy now!!! - Works flawlessly with MSI Mystic Light for controlling the RGB. A world of color options to theme your case with. -There are faster lower latency Trident kits for DDR4-4400 but the price for the CL19 was a great value for 32GB. Now that it's running at 4400mhz, worth it!

Cons: - Will default to 2333mhz upon first boot which is normal. It will fail on 4000 & 4200 XMP Profiles when paired with a 1st Gen Ryzen so don't even try it. You must manually overclock if you're on a 1st gen Ryzen. I was completely unaware the AM4 platform would behave that way and I've been an AMD ONLY owner since socket 754 so this is kinda of a revelation. Something completely different to be aware of.

Overall Review: On reddit most people have limited success getting to 3000 or 3200 with a 1st Gen Ryzen let alone stable at 3333 so I was pretty happy with that. Thanks to g.skill customer service for helping me figure out all I needed to do was upgrade to a 3rd gen Ryzen to take advantage of the full speed of this ram. I was actually very happy with the 3333mhz performance so I was over the moon happy when I actually got it to 4400. I probably wouldn't have even tried it after upgrading to the 5900X if it wasn't for their advice. Mind blown. Attached screenshots so you can see the Passmark difference before and after the CPU upgrade and RAM overclock from 3333mhz to 4400mhz. Big difference!!! Thank you g.Skill customer service. You guys rock!!! I'm extremely happy. MSI Pro-VDH Wifi motherboard, Ryzen 5900X, GT 1030 GPU (soon to be an RTX 3050), EVGA Supernova 550GA, Cougar MX330 Case, Uphere jRGB Fans, and Airgoo flexible light strips.

Overall Review: Great ram from G.skill. Have bought many of there kits over the years and this ones speed is just exceptional! Hold me off for sometime before I'm ready to upgrade to DDR5

Cons: I honestly can't think of one. At this price maybe look into DDR5? Idk, I have nothing bad to say about it TBH.

Overall Review: It works great with Intel set-up. Easy to set up!

Pros: Absolutely love these cards. They are nice and heavy giving the impression of quality work, the lights work well, and my computer accepted them with no issues whatsoever. Beautiful work.

Overall Review: I would definitely recommend this product!

Cons: - I'd really have to nitpick to find cons to this memory kit, there's none really.

Overall Review: I went from 3200Mhz (B-die) to this one, it was 'cheap enough' (relatively speaking) and I wanted to do some testing for benchmarking as well (not just gaming in general). So it was a decent boost (without changing anything else in the system). The end result from most of my games benchmarks was an increase of roughly +10 to +12 FPS on _minimum_ frame rate (so the drops in FPS in demanding games is lower, FPS is overall more consistent). The _maximum_ frame rates didn't change much, maybe +2 to +3 FPS here and there in some games. At 1440p the changes are mostly seen in the low peaks instead of the highs. It was expected, too. The kit does run well and stable since I bought it, running at 4400Mhz, advertised latencies are correct as well. All I had to do was to reset my motherboard's BIOS Memory settings (not everything was reset, just the Memory settings, voltages, speeds, DOCP, etc). Then I turned if Off, installed this new kit, turned the PC back on and that's about it, it all works, 1.5v, 4400Mhz, CL19, it's all working well. No crashing in stress tests, no errors, no crashes in games; everything stable. Great product.

Overall Review: I would Recommended ram if your bored support it.

Overall Review: Two memories that I received, ones frequency is 4400 mhz, the other is 2666 mhz, but the label attached above the memories shows that both memories frequency are 4400 mhz. Is this cheating? Need an explanation!

Manufacturer Response:
. Hi Zayne Please contact the G.Skill support team directly for assistance. The system will not run two separate frequencies so it is likely one of the values is not live. Check to see if you have the latest BIOS for the motherboard. Slots two and four away from the CPU should be populated. Make sure XMP Profile is enabled so the motherboard can recognize performance values of the memory kit. In any case, let us know how it goes and we will make sure the system is operating at maximum performance. Thank you for choosing G.SKILL Quality and customer service are our top priorities. To check or report a technical problem, please visit the Official G.Skill Technical Forum: https://www.gskill.us/forum Tech Support Email: ustech@gskillusa.com RMA Dept Email: rma@gskillusa.com